I have always been intrigued by Tracy Mincer and his Custom-Bilt pipes and even his Custombilt pipes like this one. There is something about the rugged carving and appearance of the pipes that gets my attention. I have a few of them in my collection and always enjoy the tactile nature of the pipe when it is being smoked. This old apple has the Custombilt stamp and I had reacquainted myself with the eras of the various spellings of the brand so that I can place it along with the previous billiard within the Rich Era. The pipe was in pretty decent condition when Jeff received it – dirty but really not too bad. The finish was dusty and dirty in the worm trail carvings. The bowl had a thick cake in it that flowed over the rim top into the rustication. The inner edge of the bowl appeared have some damage toward to the front but that would not be clear until it was reamed. The rim top had some deep scratches and gouges toward the right front. The stem had some deep tooth marks on both sides at the button but otherwise was in decent condition. The smooth part of the shank stamped Custombilt in script on the left side. On a smooth panel on the heel of the bowl it is stamped Imported Briar. Jeff took these pictures of the pipe to show its condition before he started his cleanup work.

He took close up photos of the rim top and the side and bottom of the bowl to show the condition of the briar and the bowl. You can see the cake in the bowl and the lava overflowing onto the top of the rim. The worm trail rustication is quite dusty and dirty.

He took a photo of the stamping on the left shank side and the heel of the bowl. 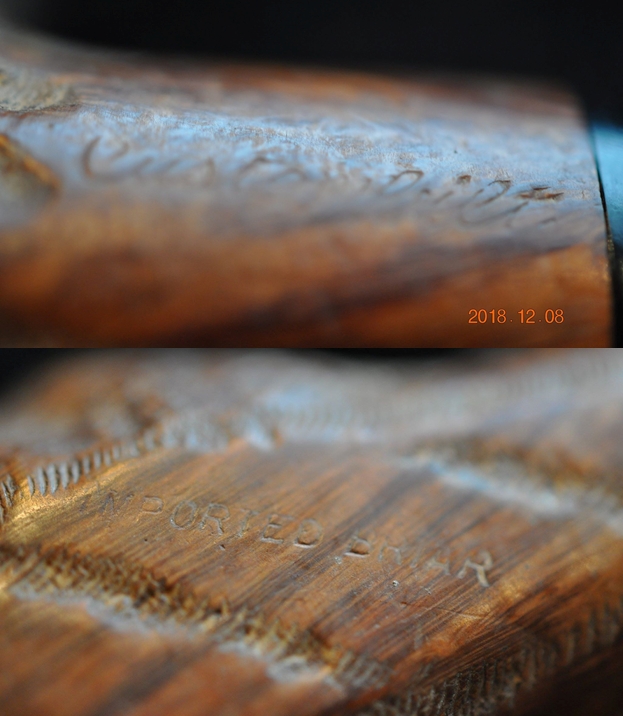 I did the research on the brand when I worked on the previous Custombilt that I restored earlier today (https://rebornpipes.com/2019/01/18/bringing-an-old-custombilt-billiard-to-back-to-life/). I have included much of that here for you to read. It comes from a great article on Pipedia that helps understand the brand and give a sense of what the various stamping looks like on the pipes (https://pipedia.org/wiki/Custom-Bilt). I cite from that article to give a feel for the brand:

In 1946, the name was changed to Custombilt after Mincer began an association with Eugene J. Rich, Inc. There were some big changes in advertising and distribution. The slogan “AS INDIVIDUAL AS A THUMBPRINT” began at this time as well.

In 1953, Leonard Rodgers bought the company and emphasized tobacco pouches and butane lighters. (However, it appears Mincer was working on his new pipe, the Doodler.) In 1968, Rodgers sold the Company to Consolidated Cigars. In the early 1970s, Wally Frank Co. bought the Custombilt trademark and began to produce their version of the pipe in 1974 or 1975. Hollco Rohr owned the Weber pipe factory, located in New Jersey, and produced the Custombilt pipes there. In 1987, the pipes were made out of the Butz-Choquin factory (France) and then Mexico until the late 1990s. Currently, the Custombilt name is owned by Tobacalera of Spain.

Along with the information above I found that the stamping that is on this pipe is identical to that identified in the article as Stamp Number Five. I have included that graphic because of the information that it included. It brings some of the issues in identifying the maker and the time period of the brand. In my mind the pipe I have in hand is very much like the Rich era pipes that I have seen and the note below says that. Interestingly the author also says he has seen the same stamping on the Wally Frank era pipes. It is a fascinating piece of history and a beautifully made old pipe. 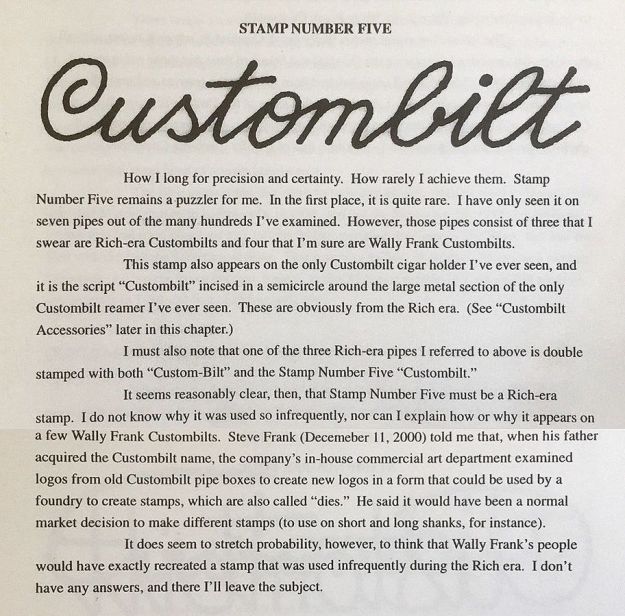 Armed with that information I turned to working on the pipe. Jeff had cleaned the pipe with his usual thoroughness – reaming the bowl with a PipNet pipe reamer and cleaning up the remnants with a Savinelli Fitsall Pipe Knife. He scrubbed the internals of the bowl, shank and stem with alcohol, cotton swabs and pipe cleaners. He scrubbed the exterior with Murphy’s Oil Soap to clean off the dust and grime on the finish. The rim top looked very good under the thick lava coat. I love the way the grain of the briar shows through the rustication. There were just a few nicks and scratches to deal with. The inside of the bowl itself looked great. The stem was in great condition other than the tooth marks on both sides near the button. I took photos of the pipe before I started working on it.

I took some close up photos of the rim top, bowl and stem to show what they looked like after Jeff’s cleanup. The rim top has some darkening around the top and the edges. There is also some nicks and scratches on the surface ant the edges. Some are quite deep looking. The stem was in good shape other than the tooth marks and chatter on both sides near the button.

I took some photos of the stamping which seemed far more visible after Jeff’s cleanup than before.

I worked on the  rim top and inner edge damage first. I gently topped the bowl to remove the deep cuts and gouges and smooth out the damage. I used a folded piece of 220 grit sandpaper to  further clean up the inner edge and leave it smooth.

I polished the sanded rim top with micromesh sanding pads – wet sanding with 1500-2400 and dry sanding with 3200-12000 grit pads. I wiped it down with a damp cloth after each sanding pad. You can see the progress in the photos below. 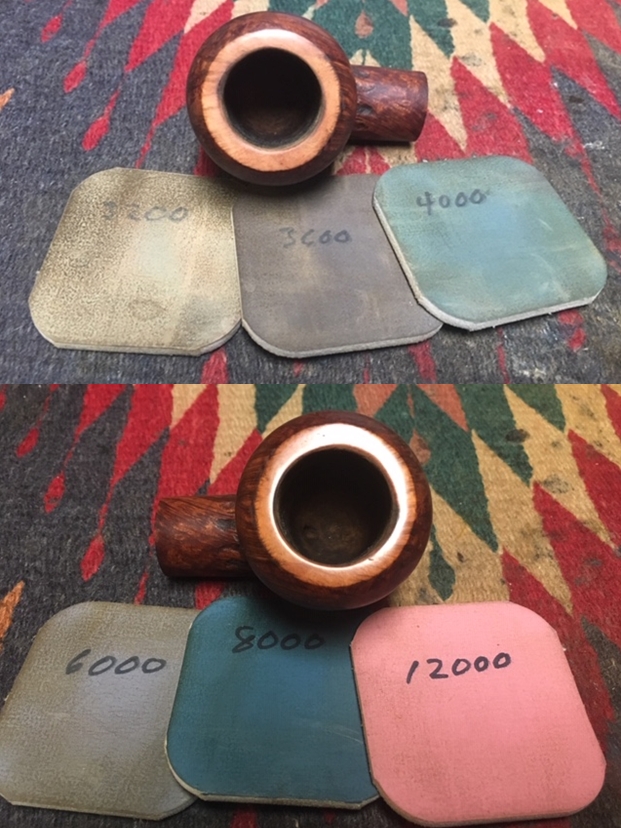 I stained the rim with three different stain pens – Cherry, Walnut and Mahogany. It still needed to be blended in a bit but the match of colour is perfect. I buffed it on the buffing wheel with Blue Diamond polish. The second photo shows the polished rim top. The match is good. 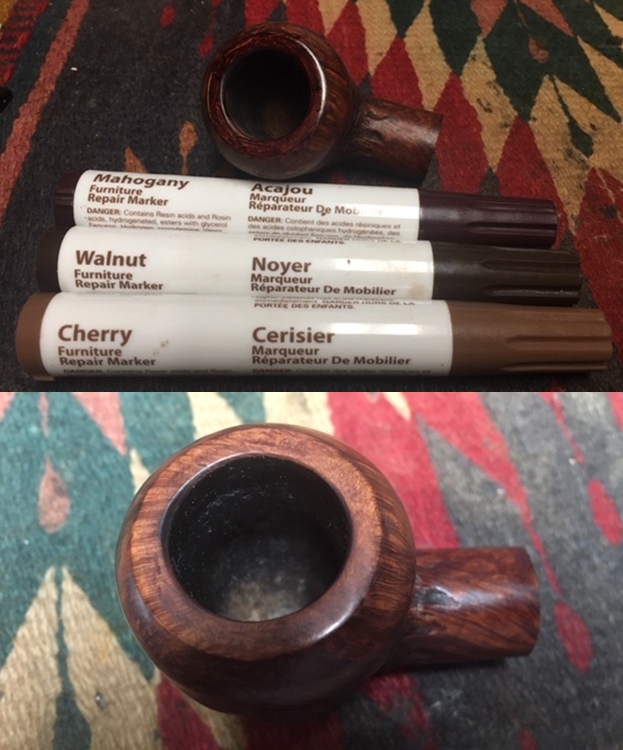 Since the briar was in such good condition I started with rejuvenating the wood. I worked some Before & After Restoration Balm into the rustication and worm trails on the bowl and the rim top. I worked it into the surface of the briar with my fingertips to clean, enliven and protect the wood. Once the bowl was covered with the balm I let it sit for about 20 minutes and buffed it off with a soft cotton cloth and then polished it with a microfiber cloth. I took photos of the pipe at this point in the process to show what the bowl looked like at this point. 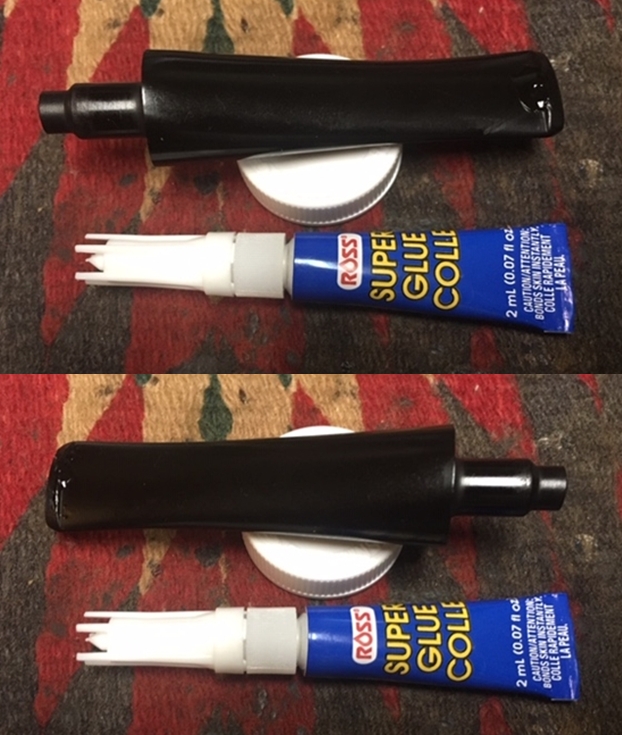 Once the repair had cured I used a flat blade needle file to sharpen the edge of the button on both sides of the stem. I also used it to flatten out the repairs. I worked on the remaining repaired areas with 220 grit sandpaper to blend them into the surface of the stem.

I polished the stem with Denicare Mouthpiece Polish to take out the oxidation at the button edge and on the end of the mouthpiece. I also worked hard to scrub it from the surface of the stem at the tenon end.

I polished repaired areas on the stem, button and blade with micromesh sanding pads – wet sanding with 1500-2400 grit pads and dry sanding with 3200-12000 grit pads. I wiped the stem down after each sanding pad with Obsidian Oil. I polished it with Before & After Pipe Stem Polish – both Fine and Extra Fine. Once I had finished the polishing I gave it a final coat of oil and set it aside to dry. 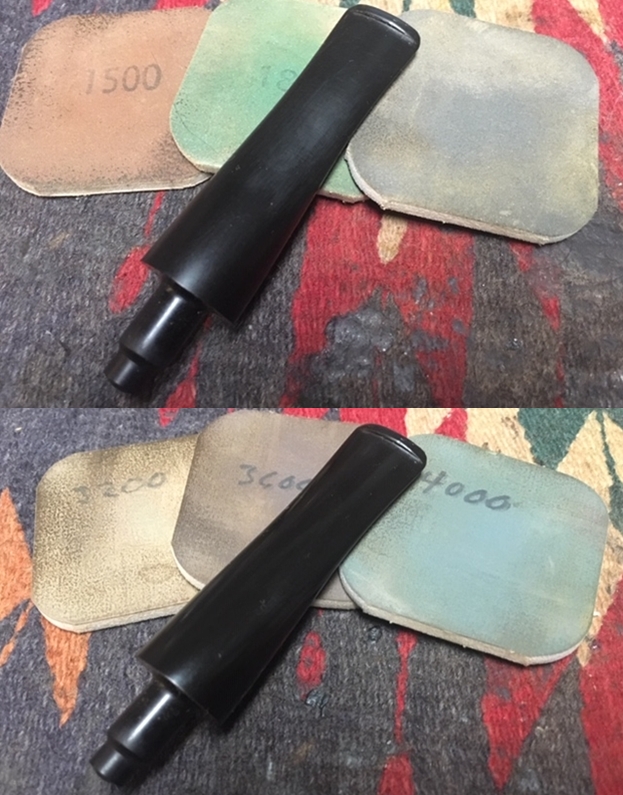 I put the bowl and stem back together. I buffed the bowl and stem with Blue Diamond to polish out any light scratches that remained in the briar and the vulcanite. I gave the bowl and the stem multiple coats of carnauba wax. I buffed the pipe with a clean buffing pad to raise the shine. I hand buffed it with a microfiber cloth to deepen the shine. The pipe polished up pretty nicely. The worm trail rusticated finish on this Rich era Custombilt and the smooth portion around the cap on the rim and shank turned out very nice and shows the grain shining through. It has the kind of rustic beauty that draws collectors to them after all of these years. The contrast of the worm trails with the grain swirling through them looked good with the polished black vulcanite. This Custombilt Apple will soon be joining the other pipes I have on the rebornpipes store. The finished pipe is shown in the photos below. The dimensions of the pipe are Length: 5 1/2 inches, Height: 1 7/8 inches, Outside diameter of the bowl: 1 ½ inches, Chamber diameter: 7/8 of an inch. If you are interested in adding it to your collection let me know. Thanks for reading this blog and my reflections on the pipe while I worked on it. 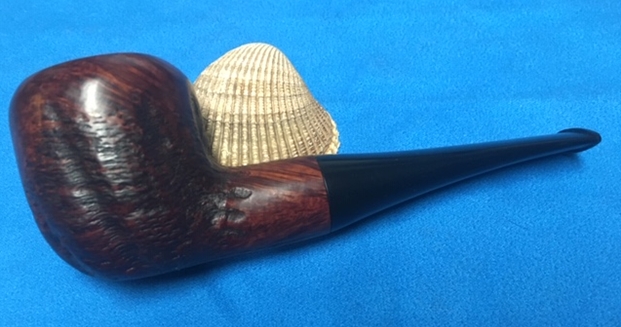 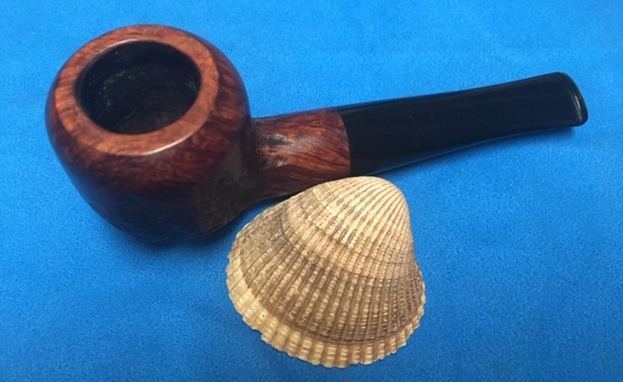 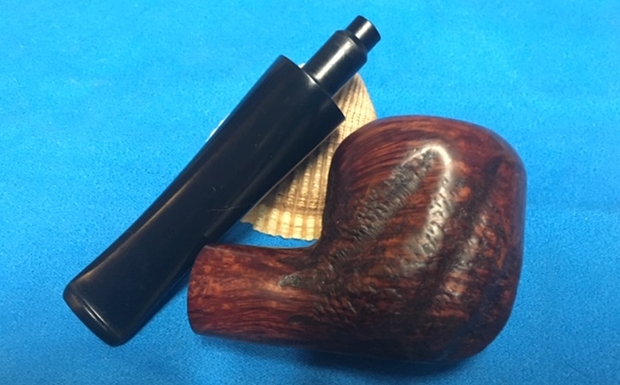 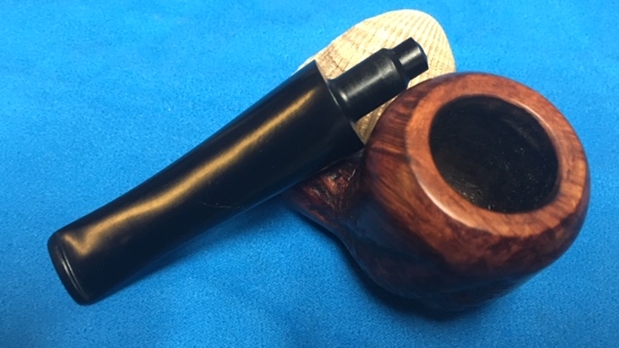 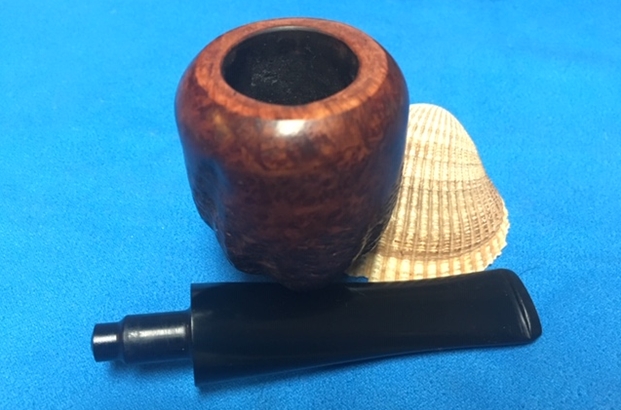