I have been working on a lot of different estate pipes and selling them for different families. Once in a while it is good to change things up a bit. Last week Alex came by and went through the Malaga pipes from George Koch’s estate. I have a box of pipes from Alex that I am always working away at he added a few more Malaga pipes to his box. There are quite a few of them to work on so I decided to work on a few of them. The sixth of these Malaga pipes is a stunningly grained Pot with a beveled rim and a vulcanite stem. The mix of grain styles around the bowl and shank combined with the stem make it a stunning pipe. It has some great birdseye and cross grain on the sides of the bowl. It is one of the many Malaga pipes that came to my brother and me in several shipments of pipes from George’s daughter Kathy. When Jeff got each box the pipes were well wrapped and packed. Jeff unwrapped them and took the following photo to give an idea of the volume of the pipes that we purchased. This Malaga came in mixed in a box of pipes much like the one below.

In each of the previous blogs that I have written on the restoration of George’s pipes I have told his story. If you have followed the restorations you will have read the information and the background piece that Kathy did on her father. Here is a link to one of the previous blogs on his Malaga pipes where I included her tribute in full (https://rebornpipes.com/2019/01/26/back-to-kathys-dads-pipes-restoring-a-%c2%bc-bent-malaga-author/). You can also read the bio on her Dad, George Koch. It is an interesting read and one that shows just how far our pipe collecting passion can go when we find a brand of pipes that we enjoy. I am going to only include the portion on the Malagas at this point. If you wish to read the rest follow the link above. 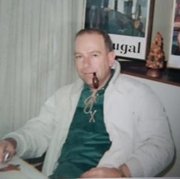 Kathy writes…We lived in Livonia, and that’s where his love for Malaga pipes began. After a few years he returned to Allis Chalmers and we moved back to Springfield. I remember that when we went back to Michigan to visit friends, Dad had to go to the Malaga store and acquire a few new pipes. Many a year I wrote to Malaga and they picked out a pipe for me to purchase that I could give Dad for a Christmas or birthday present. He was always pleased. His favorites were the straight stemmed medium sized bowl pipes, but he liked them all.

He had some other pipes, but the Malagas were his favorites. I remember him smoking them sitting in his easy chair after work, with feet up on the ledge by the fire burning in the fireplace.  Growing up it was my job to clean them and he liked the inner bowl and stem coated with Watkins vanilla, leaving a little of that liquid in the bowl to soak in when I put them back on the rack…I’m very happy they are being restored by you and your brother and hope they find homes who enjoy them as much as Dad did. Thank-you for your care and interest. — Kathy, the oldest daughter

The Malaga straight Pot with a beveled rim top and a bite proof vulcanite stem is next on the table. The carver did a great job of shaping the pipe to follow the grain on the briar. The large bowl, narrow shank and inwardly beveled rim top look really good. The bowl had a thick cake on the top 2/3 of the bowl that overflowed with lava onto the rim so that it was impossible to see if there was damage on the inner edges. The sides of the bowl and shank are very dirty with grime and oils from prolonged use. The stamping on the left side of the shank read MALAGA. The vulcanite stem had tooth dents and chatter on the top and the underside of the stem. Jeff took these photos before he started the cleanup work on the pipe.

Jeff took close up photos of the bowl and rim to capture the condition of the pipe before he started his cleanup work. The rim top had some lava overflow and some darkening on the back of the bowl. It was so dirty that it was hard to know if there was rim damage on the inner edge of the bowl. The pipe is incredibly dirty, even the externals of the bowl were covered with grime. 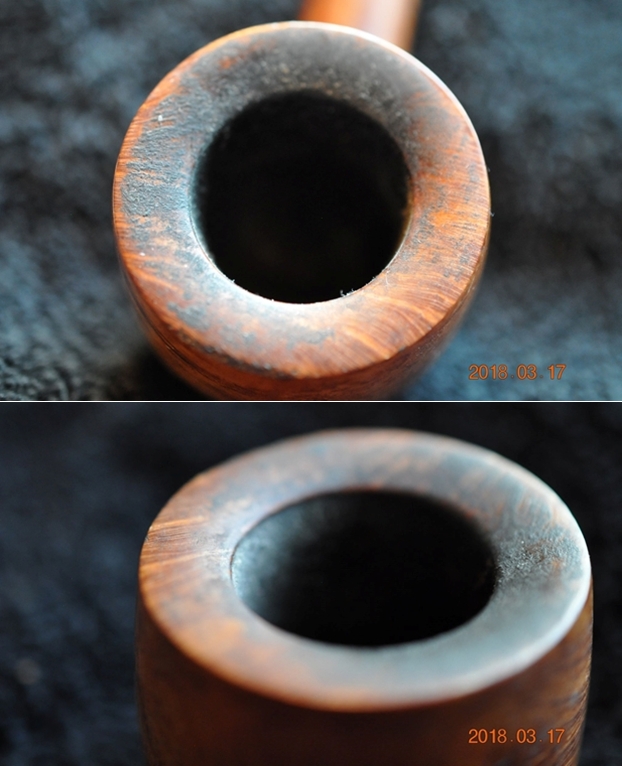 He also took photos of the sides and bottom of the bowl and shank to show the beautiful grain around the bowl. The photos show the general condition of the bowl and wear on the finish. It is very dirty but this is another beautiful pipe. 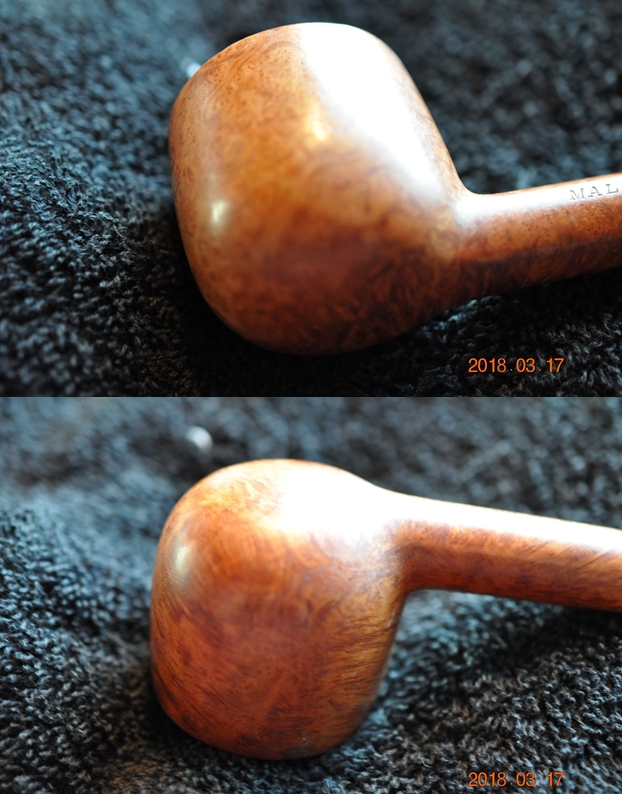 The next photos show the stem surface. There are tooth marks and chatter on both sides near the button and wear on the button surface and edges.

Jeff reamed the bowl with a PipNet pipe reamer and followed up with a Savinelli Fitsall pipe knife to remove the cake. He scrubbed out the mortise and the airway in the shank and the stem with alcohol, cotton swabs and pipe cleaners. He scrubbed the exterior of the bowl, rim, shank and stem with a tooth brush and Murphy’s Oil Soap to remove the oils and tars on the rim and the grime on the finish of the bowl. He rinsed it under running water. He dried it off with a soft cloth. He was able to remove the lava build up on the rim top and the flat surface of the rim looked very good. The inner and outer edge looked very good. I took photos of the pipe to show its condition before I started my work on it. 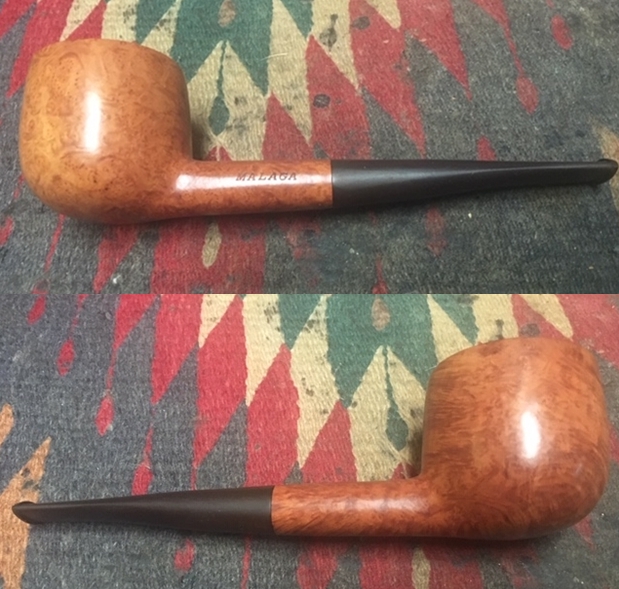 I took close up photos of the bowl and rim top as well as the stem. You can see the condition of the rim top and bowl in the first photo. Jeff was able to remove all of the tar and oils but you can now see the on the back inside rim edge. The Bite-proof Twin Bore vulcanite stem had tooth chatter on both sides near and on the button surface.

I took a photo of the stamping on the shank to show how good the condition is. It shows the MALAGA stamp and it is very legible. 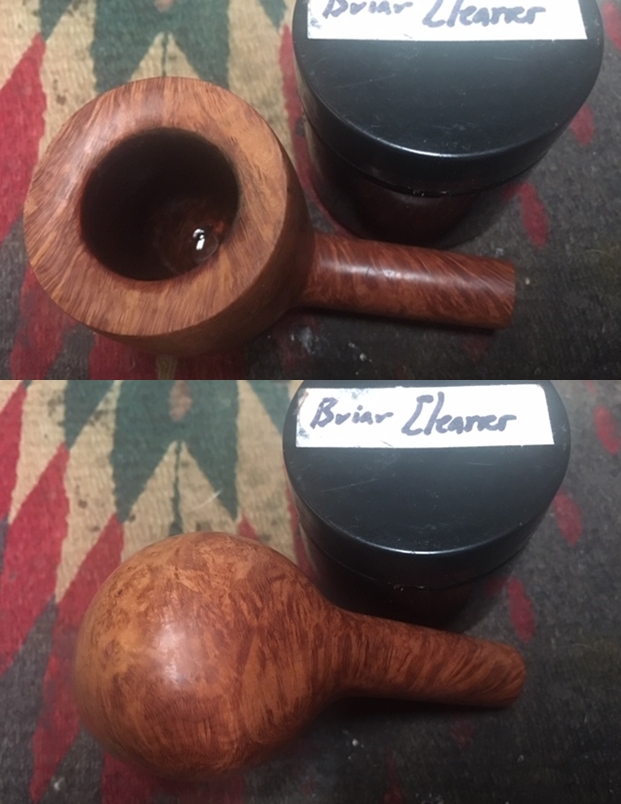 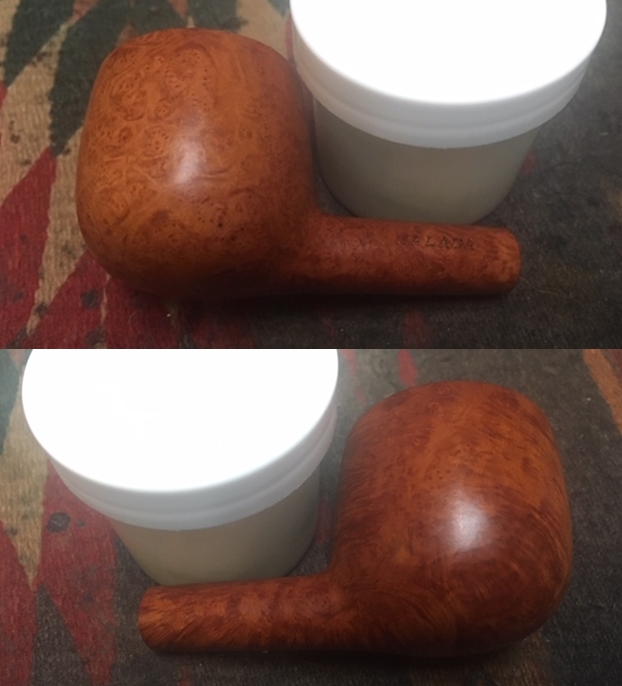 I set the bowl aside and worked on the Bite-proof Twin Bore stem. There was tooth chatter on the top and underside of the stem. I also needed to do some work on the surface of the button on both sides. I sanded both sides smooth with 220 grit sandpaper and 400 grit sandpaper to blend the tooth chatter and the repair into the surface of the stem. As I sanded and reshaped the button and stem surface the repaired areas and the tooth chatter disappeared. 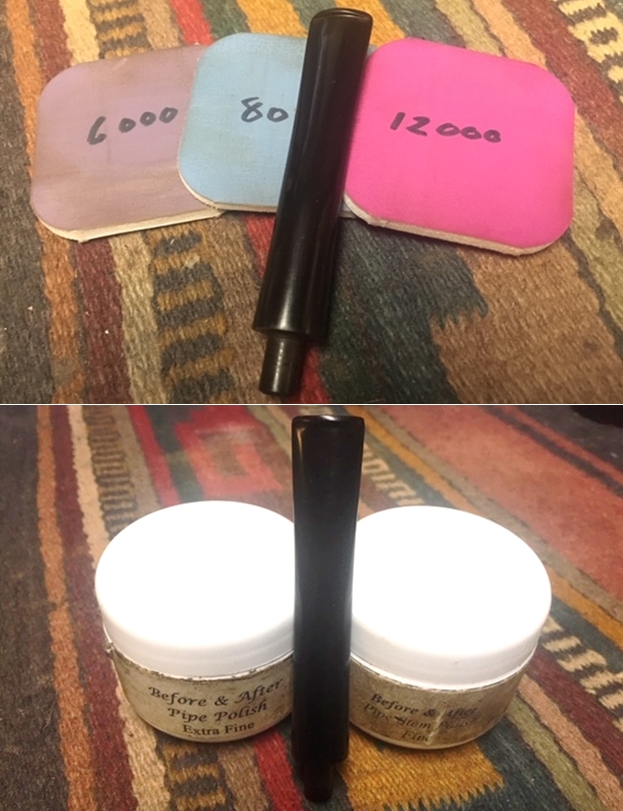 This is a beautiful Malaga Pot with an inward beveled rim top and a vulcanite Bite-proof Twin Bore stem. It has a great look and feel. The shape of the bowl, the beveled rim top and the cut of the briar work well to highlight the grain around the bowl sides. I polished stem and the bowl with Blue Diamond polish on the buffing wheel. I gave the bowl and the stem multiple coats of carnauba wax. I buffed the pipe with a clean buffing pad to raise the shine. I hand buffed it with a microfiber cloth to deepen the shine. The pipe polished up pretty nicely. The grain took on life with the buffing. The rich oil cured colour works well with the polished vulcanite stem. The finished pipe has a rich look that is quite catching. Have a look at it with the photos below. The shape, finish and flow of the pipe and stem are very well done. The dimensions are Length: 6 ¼ inches, Height: 1 ¾ inches, Outside diameter of the bowl: 1 ¾ inches, Chamber diameter: 7/8 of an inch. I will be adding the pipe to the finished Malaga pipes that I have set aside for Alex. I am glad that he is carrying on the trust for George Koch. Thanks for walking through the restoration with me as I worked over another one of Kathy’s Dad’s Pipes. 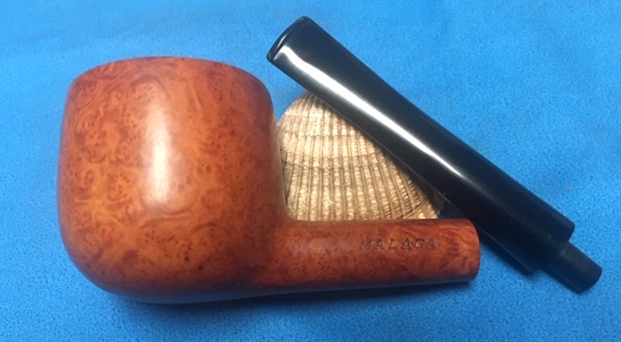 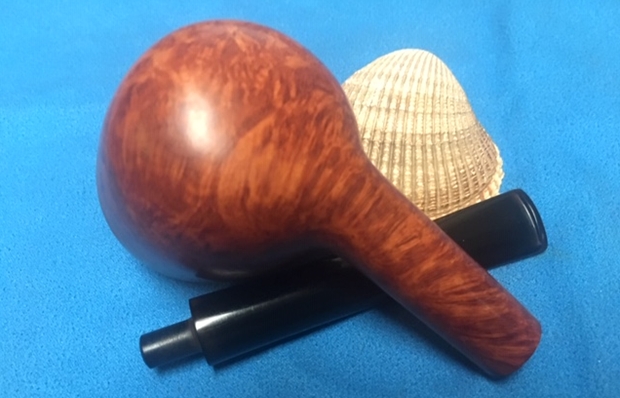