Cruising Ebay for a pipe to play with I came across a Shell bent which, as stated in the listing, had the stem bit completely chewed off. I’d been trying a mold technique to reconstruct the stem button with limited success, very limited. Anyway, this pipe’s stem had been chewed to the point where no pipe cleaner could negotiate the airway and tobacco dottle was packed in tight. Here is a photo of the listing.

Dang me, the previous owner had a heck of an oral fixation!  This stem was exactly what I was looking for. 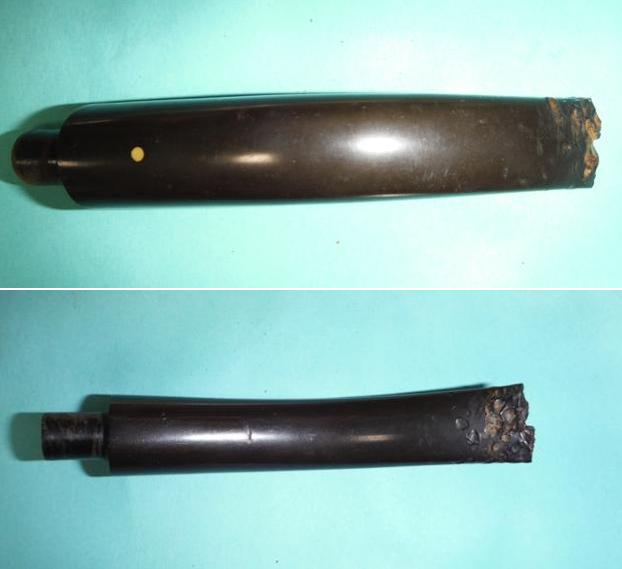 While the stem soaked in the Oxyclean bath, I evaluated the briar. The cake in the chamber was so thick you could shake a stick at it but after removal proved to be the protection connection because the inner bowl was pristine. I don’t know what it is about old tobaccos but the cake is dry and pumice-like with a delightfully transporting aroma to another time. The bowl’s rim was likewise protected by the lava of cake and tar. 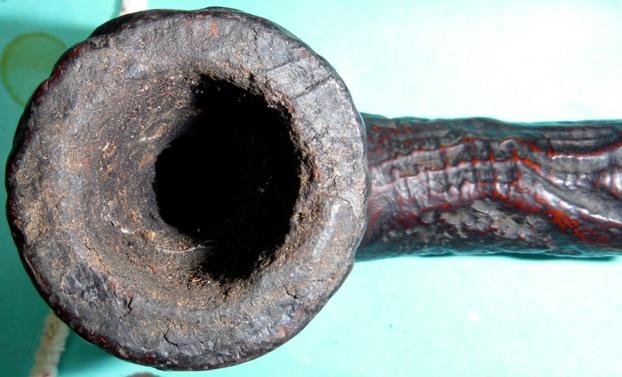 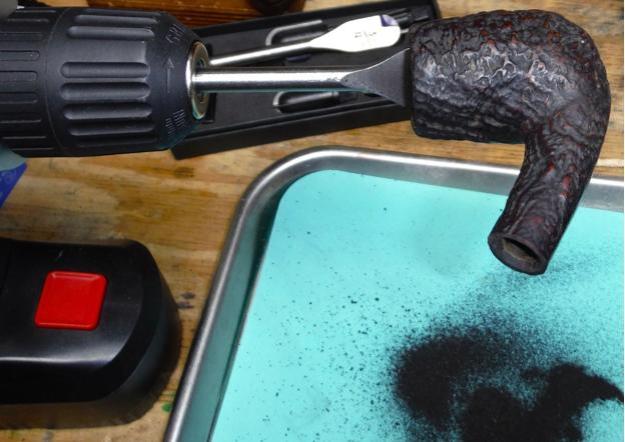 When I use my augers and drill bits, it’s either by holding the bit by hand or using an electric drill to hold the spade bit and turning the pipe itself. I’m listening for the crunching sound of cake being cleaved rather than the squeaky sound of metal on briar. Full rotations are usually not possible until the very end.

The stain and finish on the briar had that great oxblood highlight color that I love but was tarnished with a river of muck. I decided to try using my micro etcher to preserve the blast on the rim but knowing that I would later have to re-stain. I didn’t want to use Murphy’s Oil Soap because it diminishes the intensity of the stain somewhat.

Regarding the River o” Muck, I tried using my steamer which has a gun for accurate aiming and a boiler which keeps up the psi.  This muck was visible in the blast’s valleys as a white deposit. 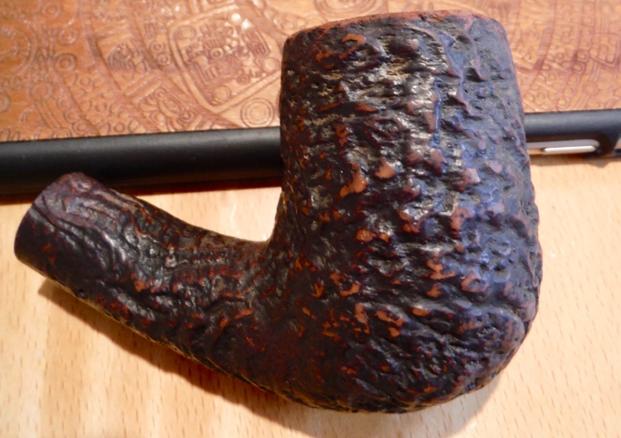 I fished out the stem from the Oxyclean bath, scrubbed it with blue shop paper towels to remove the slimy coating and polished it with flour of pumice, green, red, white diamond and Bendix on the lathe with individual rag wheels.

When the stem airway is too congested or crimped to allow passage of even a bristle pipe cleaner, I use a base “E” guitar string. It has a stiff central core wire which is later wound with another thicker resilient wire to poke on through.  My intent is not to mechanically open the airway but to remove any remaining tobacco chattel that the steamer couldn’t dislodge.

Next, I want to straighten the stem in my Wife’s oven. Of course I do this when she’s not around and so far she has turned a blind eye towards this practice.  But if there is residual tobacco burnt in her oven, I don’t want to be around to explain! The vulcanite has a memory of its initial pre-bent and pre-chewed state which will allow ease of cleaning and repair. The only bugaboo is that tenon-mortise margin can open. I was fortunate to have that happen because I have an adjustment technique to fix that which I want to try out. Importantly, don’t forget to trace the initial outline of the bent stem on a piece of paper for a reference when re-bending.

The pipe stem is positioned on a sheet of aluminum foil on the middle shelf where it is easy access and can be well illuminated by the oven’s light, I have tried to use an aluminum pie plate but the higher sides obscure my viewing the stem. I set the temperature to 247 degrees using the Bake Convection mode. This oven is electric and if yours is gas, you may want to let it get up to temperature first before placing your stem. 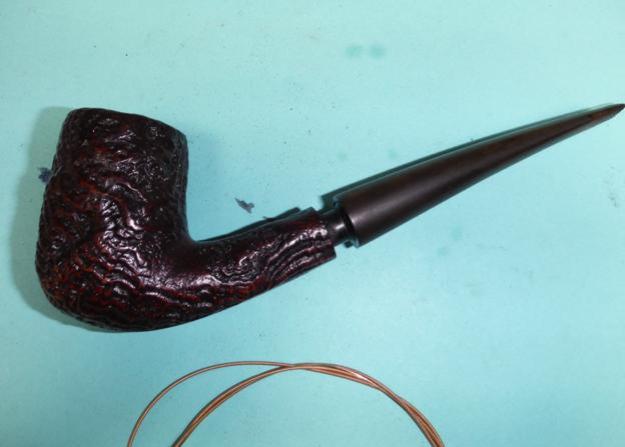 Gadzooks!  The tenon on the stem opened like a blunderbuss barrel and the stem won’t fully seat. More fun!

The cross section on either side of the air way seemed meaty enough for some pins and channeling to create a ferrule of composite resin.

I made a silicone putty impression of an unsmoked stem which approximated the same size and shape of this pipe. I made sure to capture the airway’s interior.

I then plugged the stem’s airway with wax; micro etched the exterior surface and bonded the composite. 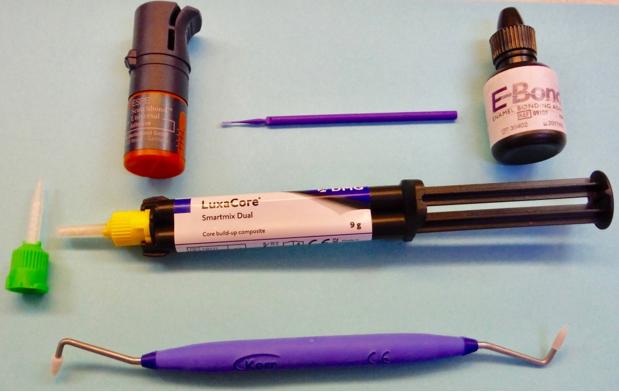 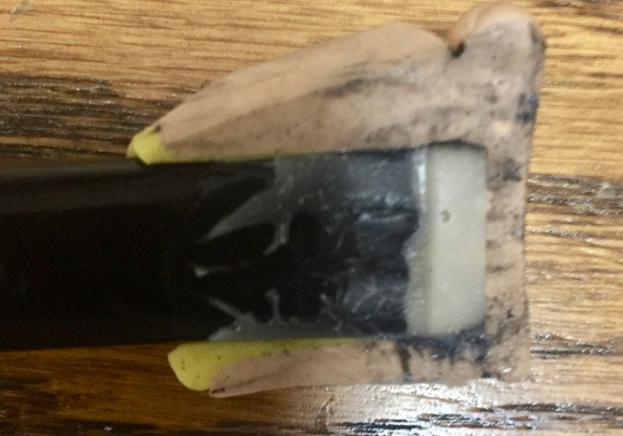 I’d gotten a black resin colorant online but found that it either accelerated the mix to a very short working time or inhibited the mix to not fully curing. To blacken my next mix I’m going back to activated charcoal. But although this bit is ivory colored, it is very strong and decently shaped so I decided to simply slather it with a coating of black CA.

When I placed the pipe back in the oven to re-bend it, I found that some of the CA had over heated and was bubbled up like road tar. Note to self, keep CA out of the oven. I had seen this happen with an infrared light in a previous experiment but thought the temp was sufficiently lower to prevent a recurrence. Oh well, just more fussin’.

By the way, when re-bending the stem I never seem to be able to wait long enough and go through several attempts before getting it right. If it doesn’t fully bend to the proper contour, you have to wait until it re-straightens itself and then some. If you get greedy you can snap stem in half. I’m looking forward to my next stem bending because I plan to chronicle the ideal temperature using my laser thermometer.

Returning to the bowl’s rim, I stained it with a light brown, got the stem to fit better but haven’t yet dialed it in and polished the pipe. 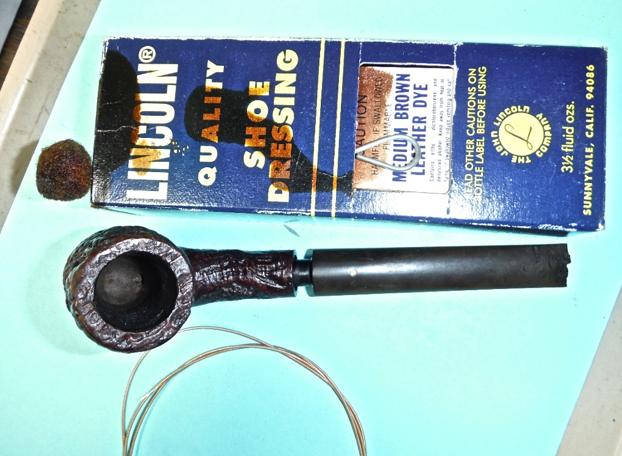 I noticed that the preliminary outline of the stem displayed the additional length that the new bit added.

Here’s the semi-final result and I wonder if any of these projects are truly ended because to aspire to the superb craftsmanship of these old Dunhill artisans is a journey rather than an endpoint.