Rebornpipes turned 5 years old last month in May. I was on the road for work so I did not see the notification from WordPress.com wishing us Happy Anniversary. As such, I did not notice their notification until this morning when I was doing a bit of back end housekeeping. I can hardly believe that the time has flown by so quickly. It seemed like just a few months ago that I was sitting at my desk one morning early and made the decision to start a blog on WordPress.com.

I did a bit of research and really liked the platform they provided for the blog. I began with their free blog edition and quickly filled it up with material from refurbs I had done in the past. It did not take long before I had to add more space and I chose a new template that would give me the kind of access to information that I was looking for in the blog. I designed tags and categories for the blog that fit my own logic and built the posts around them. I had no idea if it would be effective for others but it worked for me. The last addition was to purchase the rebornpipes.com domain.

When I started the blog I had no idea whether it would grow or if I would simply be creating a repository of my own restorations online. I hoped that others would contribute and that the blog would fill a large gap I saw and experienced in my own journey into the pipe refurbishing community. I decided it did not matter to me which direction the blog took. I launched it with low expectations and those were met within the first few months.

Today at the five-year mark, I look back and the blog has taken on a life of its own. It has grown from just my own posts to those of over 20 contributors. Al Jones (upshallfan) has been with me from the beginning and I am thankful for his support and friendship. Throughout the years, other contributors have come and gone and new ones are added regularly. Each one brings their own flavor and flair to the work of refurbishing. Their style and innovations leave me excited to read the next posts that I will read. I thank each one of you who have contributed to the blog so far and remind the readers that the door is always open for you to make your own contributions to the hobby. Email me at slaug@uniserve.com for information on post formats and details.

I did some looking over things in the back end of the blog and thought I would share some of the details. It is fascinating to trace the growth of the blog from the perspective number of views over the five-year time period. Here is the number of views, visitors and posts by year from the beginning.

The last stat that I found interesting and thought you might enjoy is the number of followers of the blog and the means by which they follow it. The first is those who follow via WordPress.com. The second is those who have chosen to follow by email and the final is those who follow on Social Media. I added Facebook and Twitter in 2015. I am not sure of the crossover of followers on multiple platforms. It is fun to see the growth and reach of the blog now. 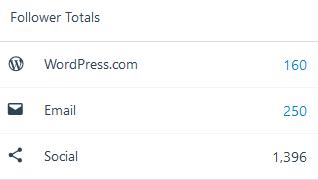 Another interesting stat is to see the global coverage of viewers of the blog. The first graphic below shows the coverage on a flat map of the world. Following that, I have copied a list of the various the countries that are represented in the views by number of views from highest to lowest (United States with 659,593 views to Micronesia with 1 view). 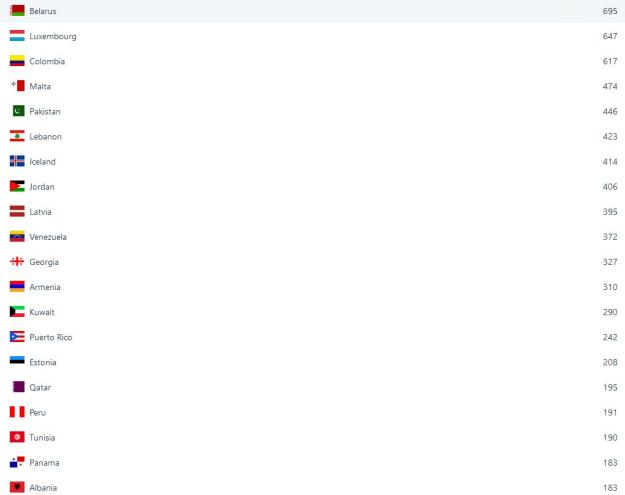 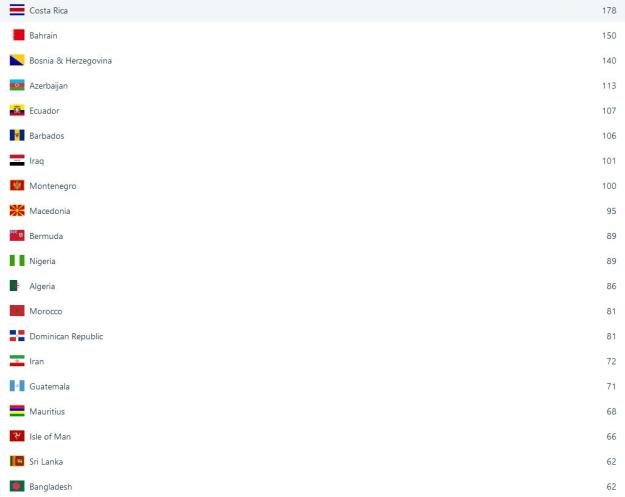 I have no idea where the blog will go or what its life expectancy will be but I am committed to continue to post and pay the bills to keep it going as long as I am able. It has become a major part of each day to read and do the housekeeping on the blog. It is a pleasure to sip my morning coffee and read through what other have posted and commented. Thank you all – those of you who contribute your own work, those of you who read and comment, those of you who read and email periodically to let me know how much you are enjoying the blog and all of you who are loyal readers and enjoy the blog on your own. It is because of the joy of refurbishing, bringing old pipes back to life that I continue to work and continue to post. Thank you all.

Henry and I have been emailing back and forth on all things pipe repair and I have to say I enjoy each missive he sends me. He is a creative guy who is using his dentistry expertise to work on pipes. The kind of repairs he does and the equipment he has both built and gathered is unique and certainly adds some new ideas to the hopper for refurbishers like me. I don’t want to bore you with all kinds of introduction on Henry. I will let his restoration of this old Dunhill speak for itself. Welcome and thank you for your contribution Henry. – Steve Laug, rebornpipes

I’d seen this old pipe bought and sold several times on Ebay, each time gussied up a little more but still tap dancing around the issue of the split shank repair band. Being the sucker that I am for gnarly old patent Shell Dunhill’s, I decided that this was the perfect opportunity to see what was under the band and possibly date this old codger.

Using 10x’s loupes with a parallel headlight source, I sectioned the band to find, to my lucky surprise, NO CEMENT! Just popped off, pretty as you please with no clean-up necessary. I used a fine carborundum wheel to initially trough the metal and then finished with a sharp new #2 carbide round but in an electric lab hand piece by Kavo. The Kavo or less expensive Medidenta hand pieces are ergonomic and very smooth running when compared with dremels. I would not try such a procedure for fear of scaring the briar without a hand piece I fully trusted. 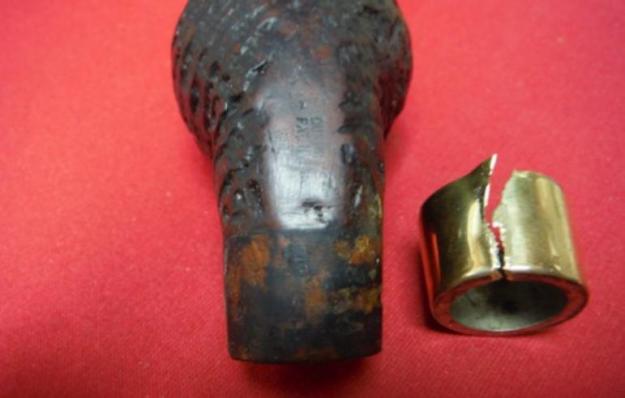 The newly exposed underside of the shank was faintly stamped with an incomplete patent number starting with 116(989/17) which would place this pipe from 1925-1934. No closure here since the date stamp was completely sanded off when the band was fitted.

I was also pleased with the stem’s sizing to the shank. Still there was enough of a suggestion of the shell finish to complement the rest of the pipe.

The 8mm stem orifice leads me to think this was a filtered pipe.

The usual chamber cake removal (different pipe). I also use drill bits by hand to router out the mortise to bowl.

When I want to conserve the original briar’s finish, I plug the bowl with a cork after stretching a latex or nitrile glove over the rest of the pipe. I then snip the tip of one of the fingers and poke the shank through the finger and out the hole. I tie off the glove and scrub the mortise and shank submerged in a Tupperware container filled with 91% isopropyl alcohol or vodka. Black muck floats out with every agitation of the shank brush. 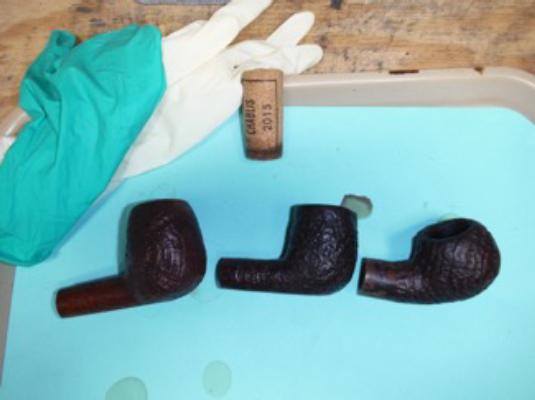 Drilling the micro-pin channel across the fissure. 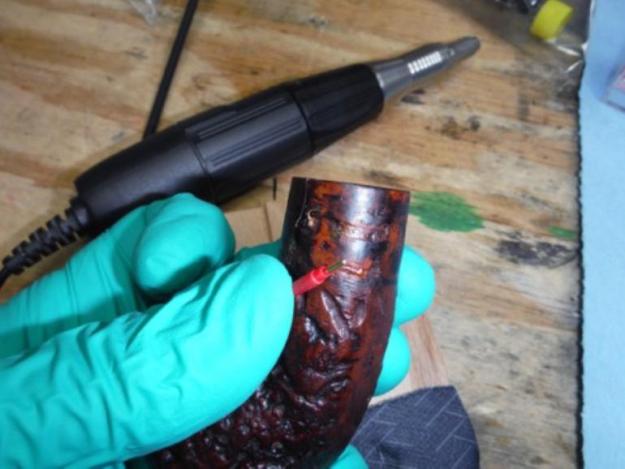 Once threaded into place, the pin shears off and the driver/carrier is removed. Of course I want the pin in the center of the thickest part of the shank through which the crack runs.

Pin hole back filled with black CA. Also spread some for aesthetic purposes on the composite plug.

The stem was then buffed with four of pumice, Tim West’s green & red abrasive bars, White Diamond, Bendix plastic polish, Paragon wax and then a clean wheel and micro fiber towel. The bowl rim was gently micro-etched (Danville sand blaster) and polished with a Robinson bristle wheel brush. Luckily, the pipe was dark in general and the wax darkened the rim so that it blended. I flamed the wax to melt it into the rustications and buffed using a shoe polish brush supported by the bench pin.

I ozonated the pipe for a night to remove any ghosting.

Hope I don’t bore you with my Magnificent Obsession of resurrecting old pipes with the tools at hand. BTW, the light spot on the shank is an artifact of my flash. I’m going to deep six my crummy point and shoot and use my iPhone camera now that my MacBook can again see it as a drive. If you’re having the same problem, download Sierra operating sys from Apple for free. 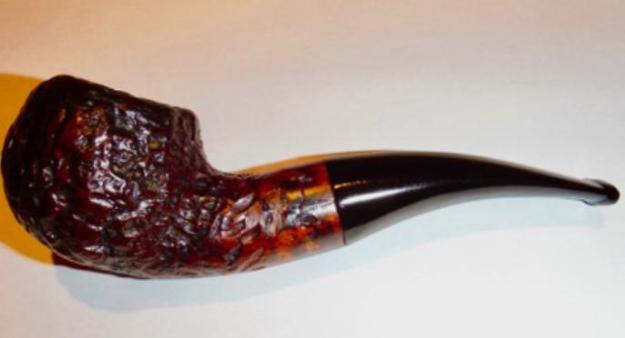 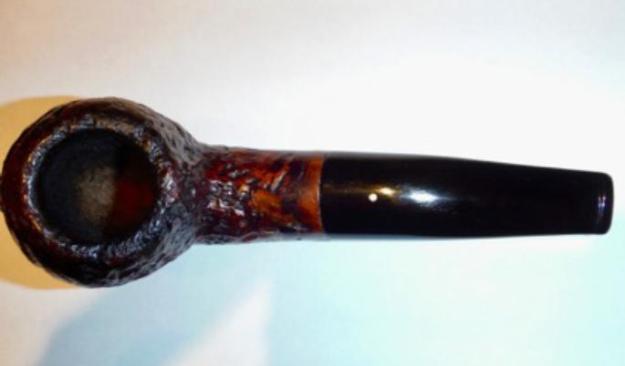