The next pipe was a mess and one that obviously had been “ridden hard and put away wet”. The finish and condition was abysmal. It was definitely a stranger to any cleaning! This one is a smooth Bent Billiard that has a rich coloured finish and great grain around the bowl sides and shank under the grit and grime of years. This pipe was purchased on 06/05/21 from a fellow in Brazil, Indiana, USA. The finish is almost bland looking it is so dirty it was hard to know what to expect once it was cleaned. It was stamped on the  left side of the shank and read SHAMROCK. It was stamped to the right of the shank and reads MADE IN IRELAND (in a circle) with the shape number +69 next to the bowl. It was filthy when Jeff brought it to the table. There was a thick cake in the bowl and lava on the rim top and the inner edge of the bowl. There were nicks in the outer edge all the way around. There were burn marks on the outer edge on the right and left front of the bowl. The stem was oxidized and had light tooth marks and chatter on the top and underside on and near the button. Jeff took photos of the pipe before his cleanup work.

Jeff took photos of the rim top and stem to show the general condition of the pipe. The bowl is heavily caked so it is hard to know the condition of the edges under the lava overflow. The burn marks are also visible on the outer edge of the bowl. The stem is oxidized, calcified and grimy. It has some tooth marks on the top and underside near and on the surface of the button itself. 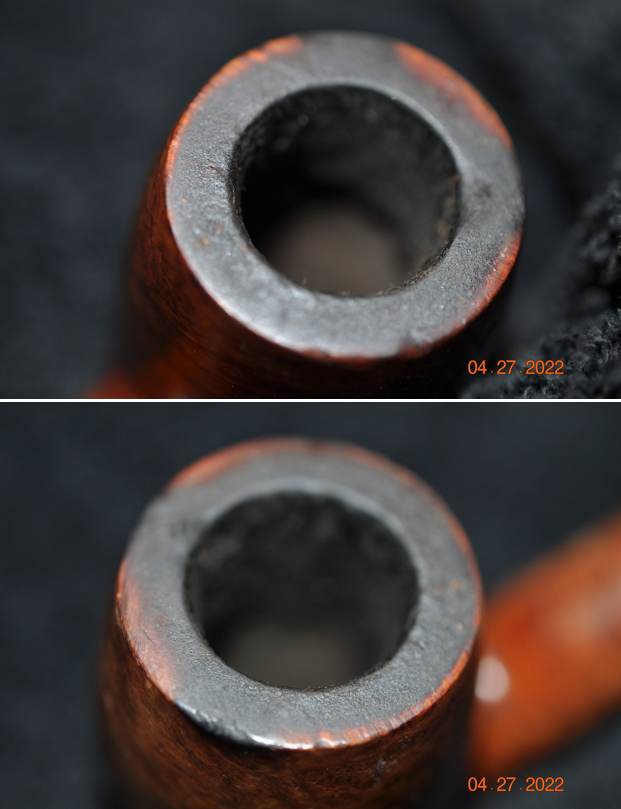 Jeff took photos of the bowl sides and heel to show the grain that was around this bowl. You can see the sandpits and nicks in the briar in the photos below. Even so, it is a nice looking pipe. 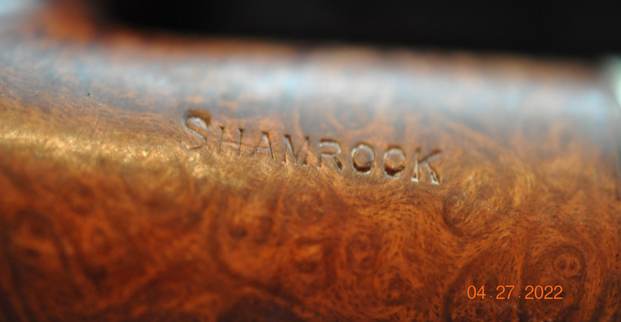 Judging from the description above, the pipe I am working on is stamped with the stamp noted in red above. Made in Ireland in a circle which narrows the date to between approximately 1945-1965. It is just stamped SHAMROCK with no brand name and no stamping on the stem.

On page 302 there was a listing on the nickel mounted markings such as those used on the band on the shank of this pipe. I quote:

Nickel-Mount Markings. Often called faux hallmarks or faux marks by Peterson collectors, this set of three little images of a shamrock, an Irish wolfhound and a round tower appear within rectangular shapes as decorations on nickel mountings. Very early nickel mounts (1891-c. 1920) had no such decorations, only the same stamps used on sterling but without the hallmarks. As a stamp, the set of decorations began to appear at the beginning of the Irish Free State era, sometimes alone but often under K&P and over block lettered PETERSON over DUBLIN, although the  three emblems appeared on K&P’s Irish Carving Shamrocks pipes since 1896. The stamp was used until about 1963, when hand soldered nickel bands and ferrules were replaced by pressed ferrules and premade bands…The shamrock is the emblem of Ireland; the Irish wolfhound has long been used for both hunting and protection, and is an emblem of strength; the round tower a symbol of Ireland’s early religious power. These decorations were stamped at the factory on non-sterling mounts only, and the assay office has nothing to do with them…

I was utterly surprised when I took this pipe out of the box and compared it to the before photos. Jeff had done a great job cleaning up the pipe as usual. He reamed the pipe with a PipNet reamer and cut back the cake back to the bare briar. He cleaned up the walls with a Savinelli Fitsall Pipe Knife. Surprisingly the walls looked unscathed from the heavy cake. He scrubbed the interior of the bowl and shank with pipe cleaners, cotton swabs and alcohol to remove the tars and oils. He scrubbed the exterior of the pipe with Murphy’s Oil Soap and a tooth brush to remove the grime from the finish. He worked on the rim top lava and darkening with the soap and tooth brush. He scrubbed the inside of the stem with alcohol and pipe cleaners. He scrubbed the exterior of the stem with Soft Scrub and then soaked it in Briarville’s Deoxidizer. He washed it off with warm water to remove the Deoxidizer. The pipe looked far better when it arrived. 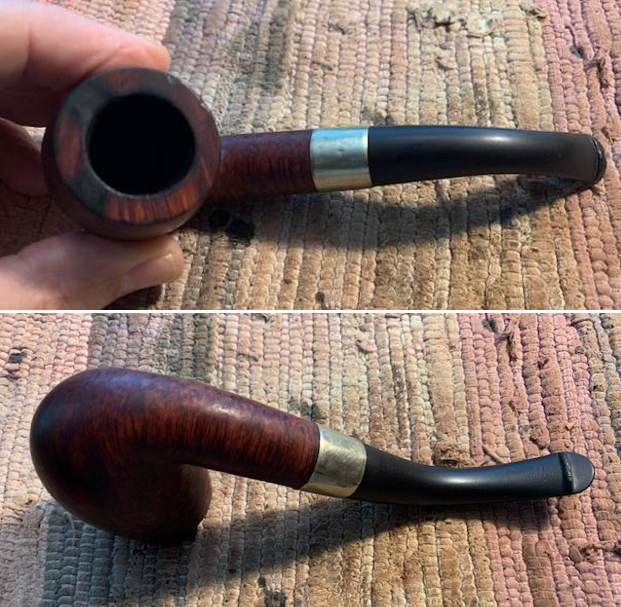 The cleaned up rim top revealed very damaged inner and outer edges and the top. It was both burned and nicked from being knocked out on a hard surface. I took some close up photos of the rim top and edges to show how well it had cleaned up and the damage to the edges around the bowl. I also took close up photos of the stem to show the tooth marks on the surface near and on the button itself. 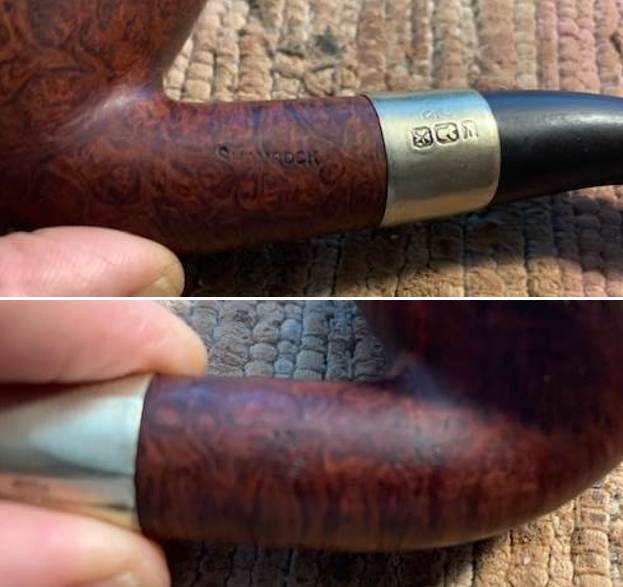 There was a large flaw in the briar near the rim top on the right side of the bowl. I filled it in with clear super glue and briar dust. Once the repair cured I sanded it smooth with 220 grit sandpaper to blend it into the surrounding briar. 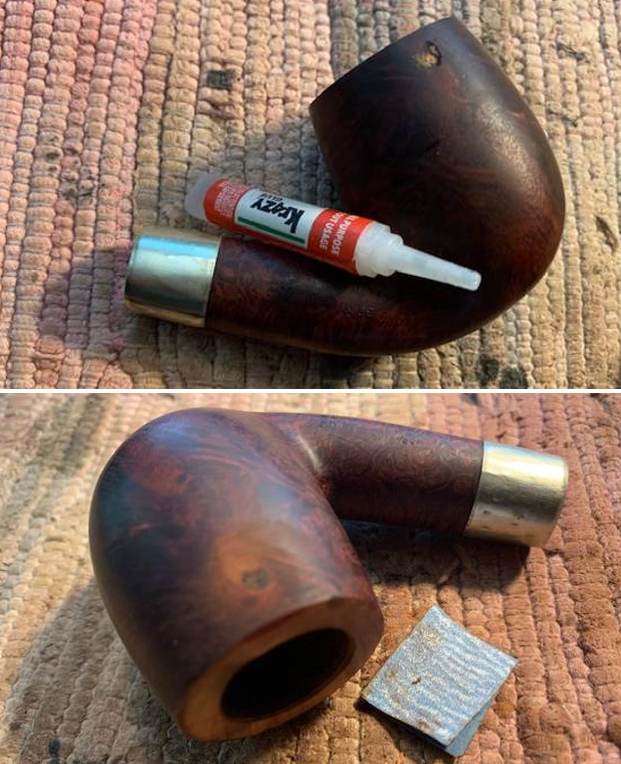 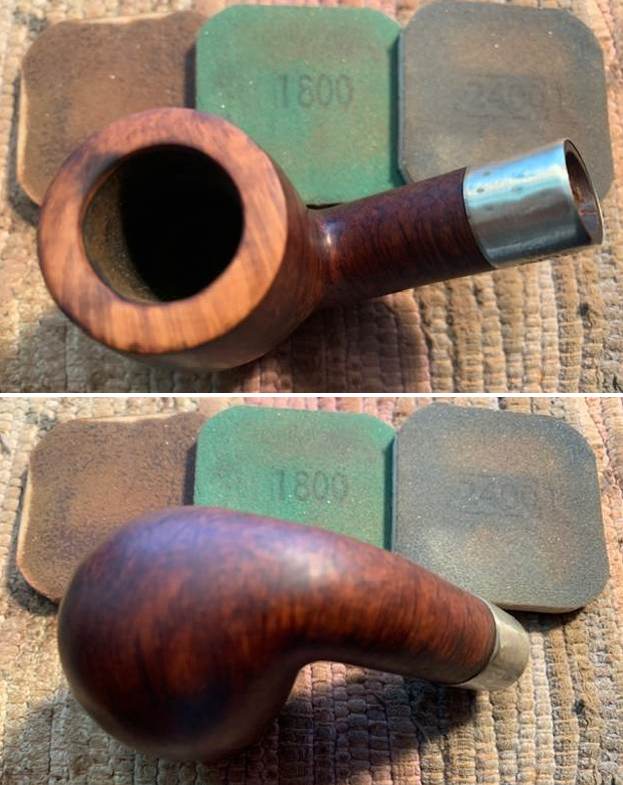 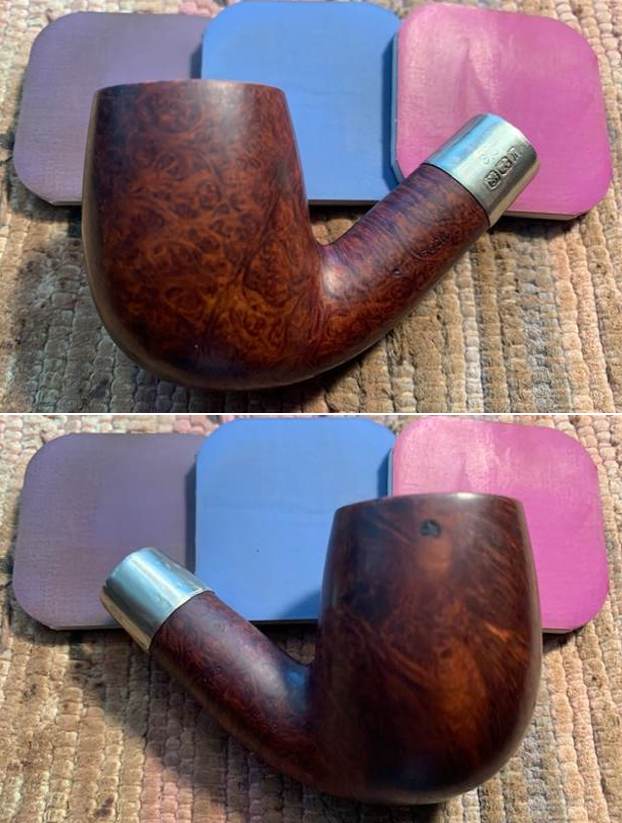 I restained the rim top with a Walnut stain pen to match it to the surrounding bowl colour. It looked pretty good. I also touched up the repaired flaw on the right side of the bowl toward the top. They will both blend well once the pipe is polished and buffed.

I am excited to finish this Nickel Banded Older Made in Ireland Shamrock 69+ Bent Billiard. I put the pipe back together and buffed it with Blue Diamond on the buffing wheel. I gave the bowl and the stem multiple coats of carnauba wax. I hand buffed the pipe with a clean buffing pad to raise the shine. It is fun to see what the polished bowl looks like with beautiful mixed grain all around it. The polished nickel band is losing some of the plating but it still looks great with the black vulcanite stem. This smooth Classic Shamrock 69+ Bent Billiard is great looking and the pipe feels great in my hand. It is light and well balanced. Have a look at it with the photos below. The dimensions are Length: 5 ¾ inches, Height: 2 inches, Outside diameter of the bowl: 1 ¼ inches, Chamber diameter: ¾ of an inch. The weight of the pipe is 59 grams/2.08  oz. It turned out to be a beautiful pipe. I will be putting on the rebornpipes store in the Irish Pipe Makers Section. Thanks for your time and as Paresh says each time – Stay Safe. 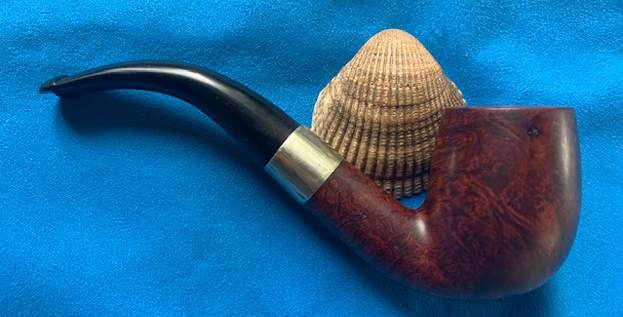 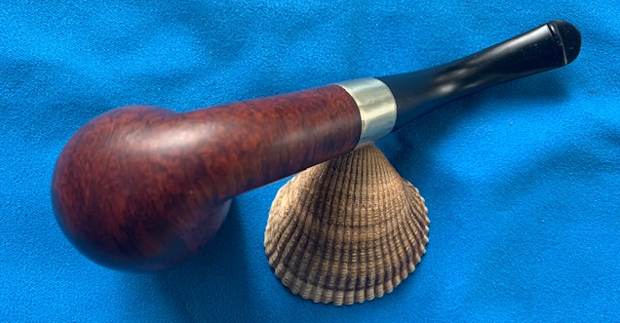 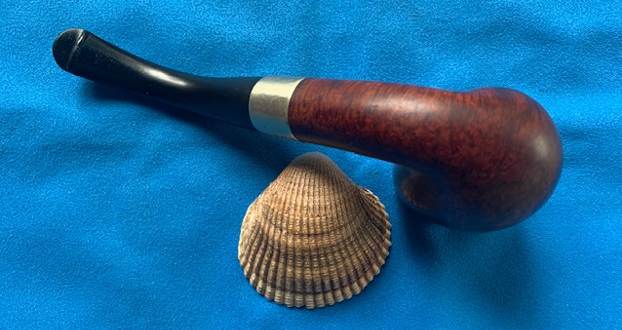 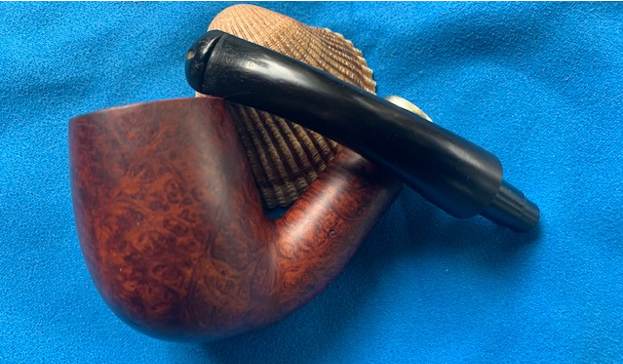 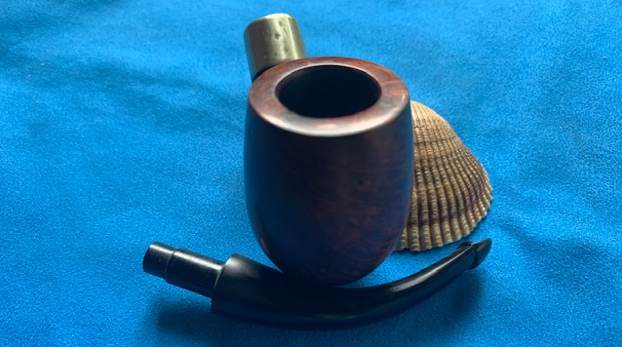 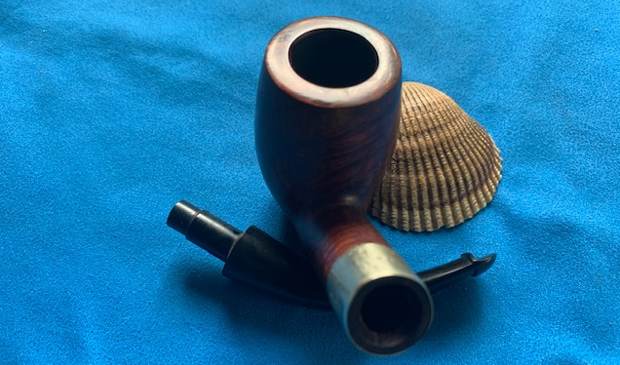