I finished the Brigham pipes and have one more Canadian Made pipe to work on. This one is a partially rusticated bent Billiard, stamped on a smooth panel on the left side of the shank with that reads Made in Canada next to the bowl and that is followed by Trypis. There is no shape number stamped on the pipe. There was a thick cake in the bowl with remnants of tobacco stuck on the walls. There was a lava overflow on the rim. The smooth rim top and edges appear to have some damage on the right side. It looks like the pipe had been dropped and the outer edge of the bowl was out of round. The smooth finish looks great but is dull with grime ground into the surface. The rustication is rugged and unique to Trypis pipes and while similar to Brigham Pipes it is uniquely his design. There was a beautiful pipe underneath all of the buildup of years of use. The thin saddle stem was oxidized and calcified toward the end with some tooth marks and chatter on both sides ahead of the button. Jeff took photos of the pipe before he started his cleanup work on it. 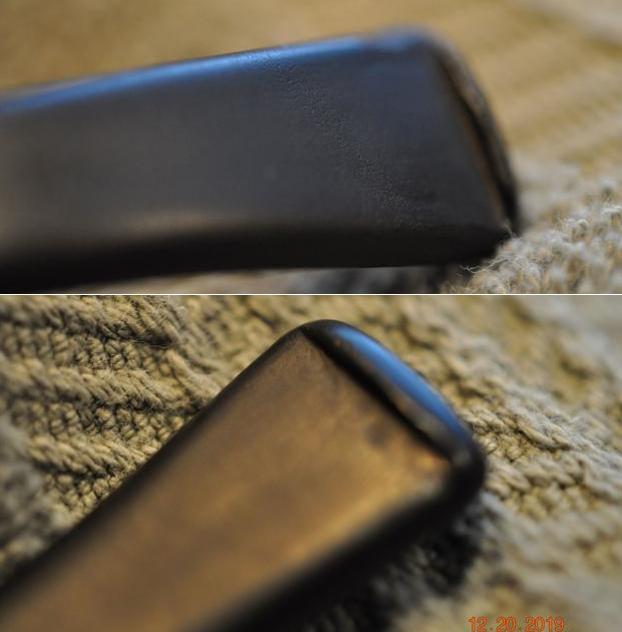 Jeff took a photo of the side and heel of the bowl to show the condition of the finish. You can see the well done and rugged rustication that I have seen on other Trypis pipes. Even under the dirt and debris of the years it looked very good. You can see the damage on the outer edge of the rim on the right side in the first photo below. 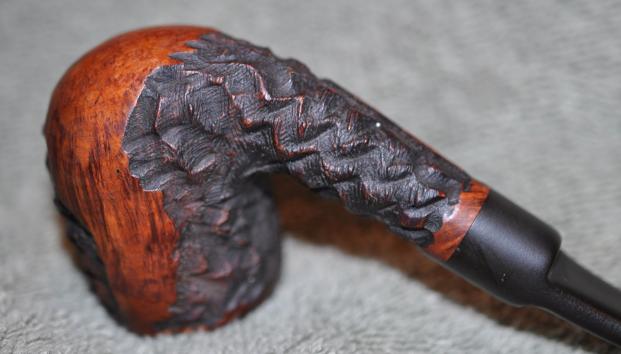 The stamping is clear and readable as noted above. The flow of the stem is well done but there is no identifying marks on the stem side.

I turned to Pipephil and looked up the brand for a quick summary of the detail on the brand (http://pipephil.eu/logos/en/logo-t8.html). I have included a photo of Phillip Trypis and a short summary of what was written in the side bar of the section. I quote in full below.

Phillip Trypis first worked for Brigham as production manager. He

continued to supply the Canadian brand when he was established on his own with his own Trypis label. Phillip Trypis had a pipe shop in Toronto.

I then turned to Pipedia for more information (https://pipedia.org/wiki/Trypis_Pipes). There was a great quote from Stefan Seles. I have included that in full below.

“Phillip Trypis has been a pipe maker in Canada for well over 40 years. Originally from Greece, his experience ranges from cutting burls in a briar mill to making literally thousands of pipes out of his home in the hamlet of Oakwood, Ontario. Brigham pipes benefited from Phillip’s skills where he worked for a number of years. There he directed the pipe production of the company when it was producing over 50,000 a year. Even though he left to start his own pipe shop, he still imported briar and turned tens of thousands of bowls for Brigham not to mention produce a large number of his own branded pipes.

Just over a year ago, Phillip had a serious fall and although he is back making pipes, he is unable to travel around to sell them as he once did. He has asked me to help him in that effort.

The pipes listed below are some of his best work made from decades old MF and R ebuchauns as well as some recently purchased Italian plateau. The prices are excellent, especially given the age and quality of the briar used. In fact, I would venture to say that these pipes have no peers, especially below the $100.00 price. You must be the judge.

Many of the styles are traditional in form although Phillip has a number of freehand styles that are both familiar and off the beaten path. The vast majority of the higher priced pipes are very large pieces to be sure.”

With the information from the two sites I had the background on the pipe maker that I really enjoy to know when working on the pipe. This was a beauty and though I did not have any idea of when it was made it was a beauty. Now it was time to work on the pipe.

I am really happy to have Jeff’s help on cleaning up the pipes that we pick up along the way. He cleaned this filthy pipe with his usual penchant for thoroughness that I really appreciate. This one was a real mess and I did not know what to expect when I unwrapped it from his box. He reamed it with a PipNet pipe reamer and cleaned up the reaming with a Savinelli Fitsall Pipe Knife. He scrubbed out the internals with alcohol, pipe cleaners and cotton swabs until the pipe was clean. He scrubbed the exterior of the bowl with Murphy’s Oil Soap and a tooth brush to remove the grime and grit on the briar and the lava on the rim top. The finish looks much better and the great rustication on the bowl and shank had greatly improved. The rim top still was a mess. Jeff soaked the stem in Before & After Deoxidizer to remove the oxidation on the rubber. He scrubbed it with Soft Scrub All Purpose Cleaner to remove the majority of the oxidation. When the pipe arrived here in Vancouver for the second stop of its restoration tour I was amazed it looked so good. 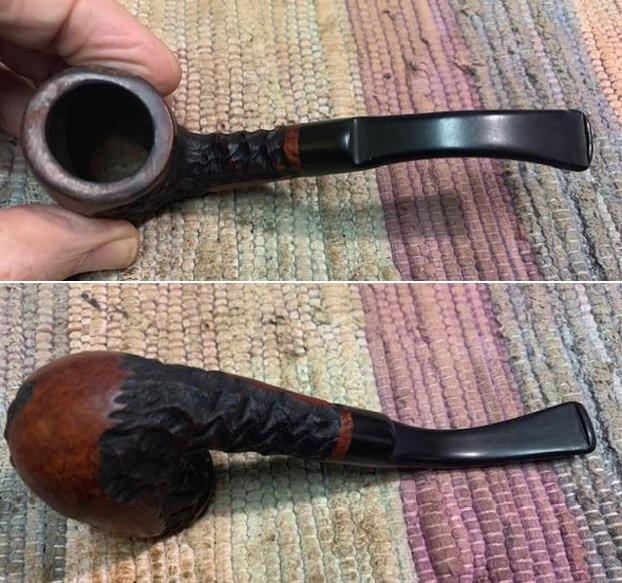 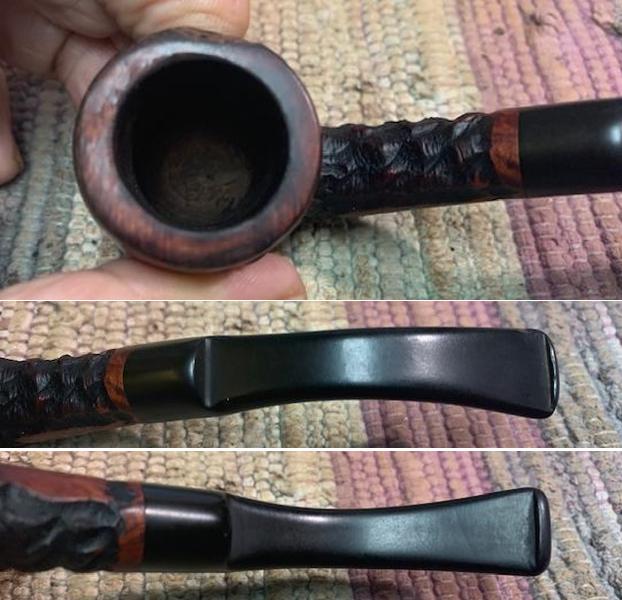 I took a photo of the stamping on the left side of the shank. You can see that it is stamped as noted above. It is faint but readable.

I took the pipe apart and took a photo of the pipe. It is a good looking pipe and has some great looking rustication on the bowl and shank.

I decided to start my restoration work on this one by dealing with the damaged rim top and edges. I topped the bowl on a topping board with 220 grit sandpaper to remove the darkening and damage. I filled in the damaged right outer edge of the rim with briar dust and clear super glue to bring it back to round. I topped the bowl once again to smooth out the repair and blend it into the rim top of the bowl. It looked a lot better than when I started. 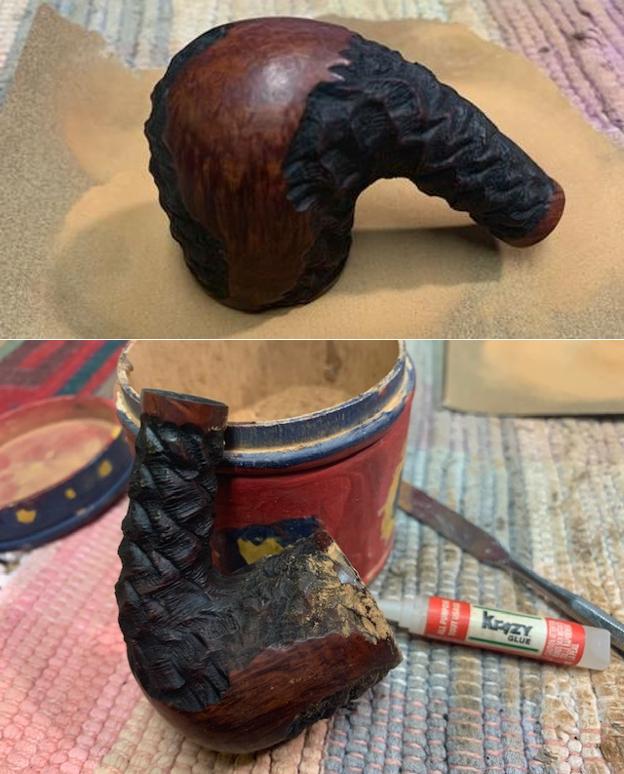 I polished the smooth rim top and sides of the bowl with micromesh sanding pads – wet sanding it with 1500-12000 grit pads. After each pad I wiped the briar down with a damp cloth. 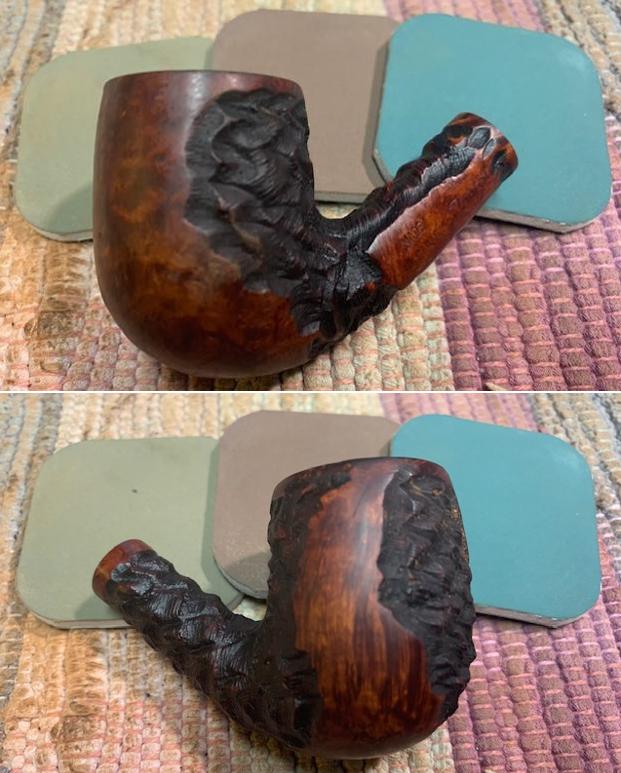 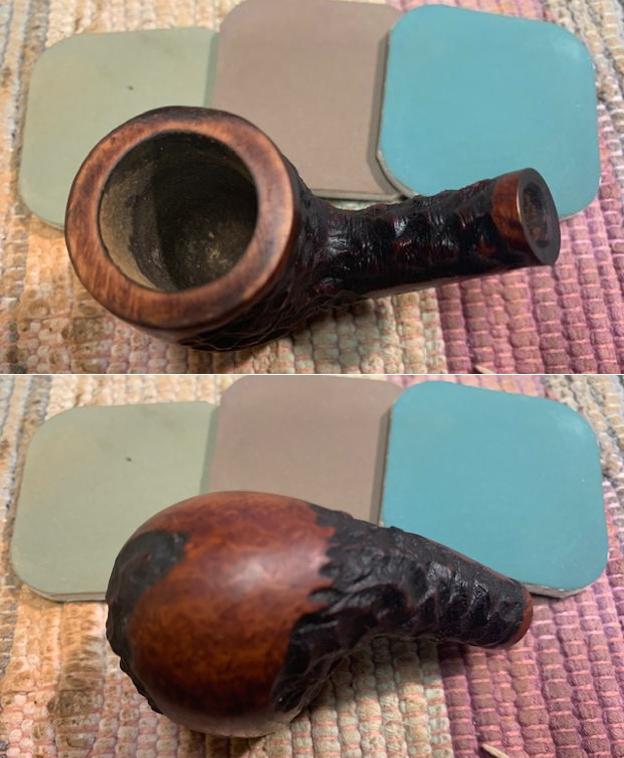 I stained the rim top with a combination of Cherry and Walnut stain pens. With that combination I was able to match the colour on the rest of the bowl.

I worked some Before & After Restoration Balm into the surface of the briar with my fingertips and a horsehair shoe brush on the rustication to clean, enliven and protect the briar. I let the balm sit for 15 minutes and then buffed with a cotton cloth to raise the shine. The photos show the bowl at this point in the restoration process. 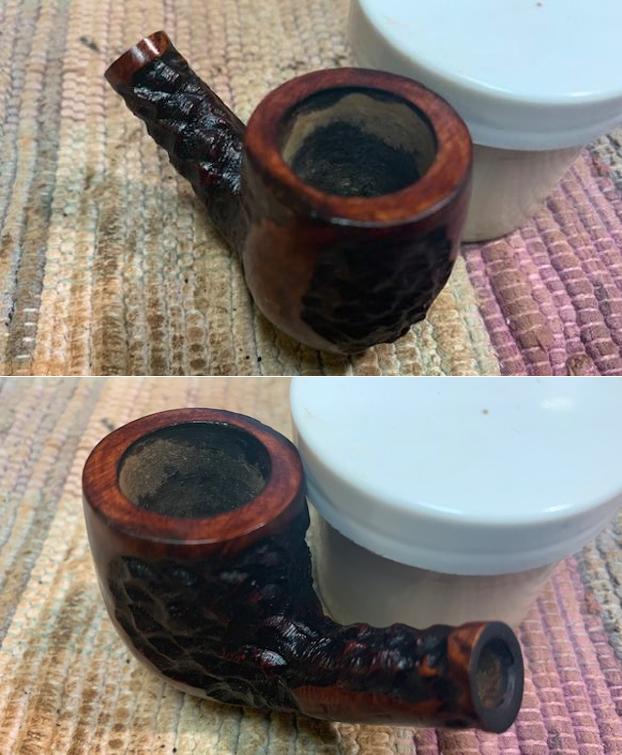 With that done the bowl was finished other than the final buffing. I set it aside and turned my attention to the stem. I “painted” the surface of the vulcanite with the flame of a lighter to lift the tooth marks. While some of them came out nicely there were several against the edge of the button that would not life. I filled them in with clear super glue. Once the repairs cured I used a file to flatten them out and then sanded the stem with 220 grit sandpaper. I started the polishing with 400 grit wet dry sandpaper. 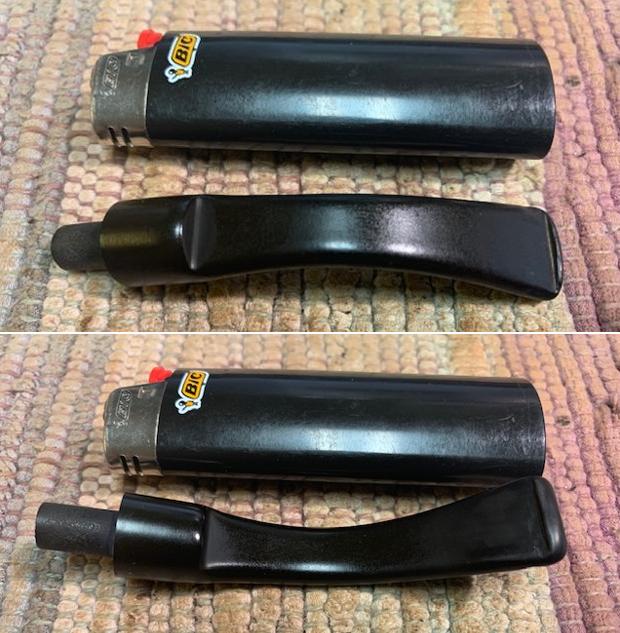 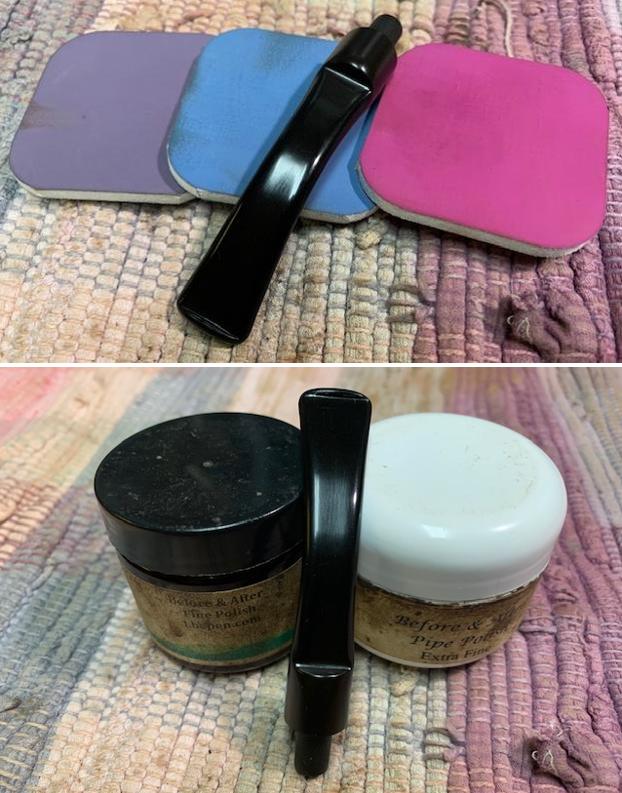 I am excited to finish this Trypis Bent Billiard as it is the last of Canadian Made pipes that I had in my to do box. It turned out to be a nice looking Bent Billiard. It has a combined finish with a smooth rim top and sides with a deep rustication on the front and back of the bowl and around the shank. I put the pipe back together and buffed it with Blue Diamond on the buffing wheel. I gave the bowl and the stem multiple coats of carnauba wax. I hand buffed the pipe with a clean buffing pad to raise the shine. It is fun to see what the polished bowl looks like with the grain popping through on the rim top, smooth panels and the rustication on the rest of the bowl and shank. Added to that the polished black vulcanite saddle stem was beautiful. This semi-rusticated Bent Billiard is nice looking and the pipe feels great in my hand. It is light and well balanced. Have a look at it with the photos below. The dimensions are Length: 5 ½ inches, Height: 2 inches, Outside diameter of the bowl: 1 ¼ inches, Chamber diameter: ¾ of an inch. The weight of the pipe is 37grams/1.31ounces. It is a beautiful pipe and one that will be on the rebornpipes store soon. If you are interested in adding it to your collection let me know. Thanks for walking through the restoration with me as I worked over this pipe. Thanks to each of you who are reading this blog. Remember we are not pipe owners; we are pipemen and women who hold our pipes in trust until they pass on into the trust of the next pipeman or woman. 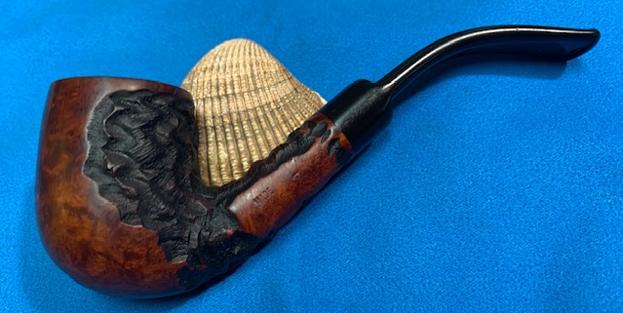 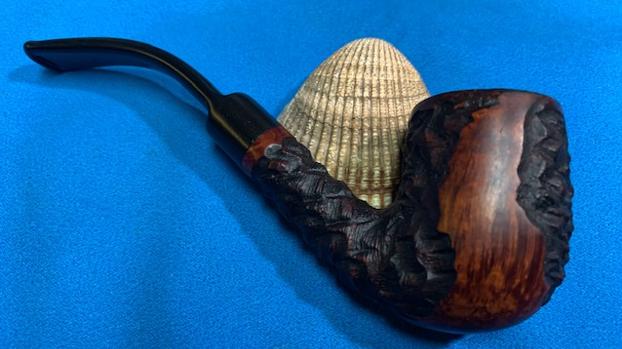 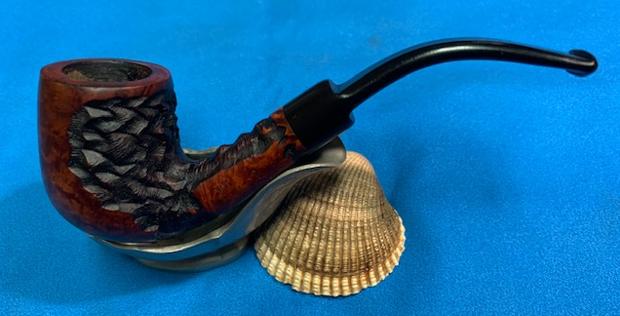