The next pipe I have chosen is another Peterson’s System Standard pipe. This one is a nice smaller size rusticated version of the shape 314. It has a saddle style Peterson’s stem on the shank end. I believe it came to us from the estate of Anglican minister that was a great friend of mine here in Canada. I was in the airport in Hong Kong when his daughter contacted me to tell me of his death and asked if I wanted to take on his pipes. I told her that I was sad to hear of his death but would gladly take on his pipes to restore and sell. This pipe was one that I believe he purchased as an estate and did not smoke. It is very clean other than the dust and debris of time  on the bowl and stem. The bowl and shank were clean with no cake, tars or oils. There was no lava on the rim top. The nickel ferrule was oxidized but undamaged. The pipe was stamped on the underside of the shank and read Peterson’s [arched over] System [over] Standard. To the right of that it was stamped Republic of Ireland stamp in three lines [over] the shape number 314. The ferrule was stamped K& P over Peterson’s on the left side. The stem was lightly oxidized and had tooth marks on both sides ahead of and on the button. There was no “P” stamp on the stem. I took photos of the pipe before I started my clean up work on it. 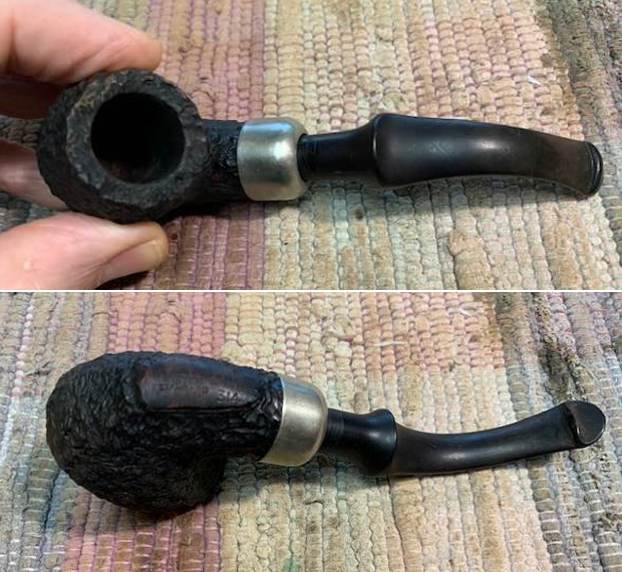 I took photos of the rim top and bowl as well as the stem to give a sense of the condition of both. The rim top and the inner edge were in excellent condition. There were clean and a bit spotty. I would need to touch up the stain on the top and edge. The stem was clean but had tooth marks on the top and underside ahead of the button. They are visible in the photos.

I took the stem out of the shank and took a photo of the overall look of the pipe.

When I worked on other 314’s I had turned to a blog about a pipe that  Paresh had restored – a smooth Peterson’s System Standard 314 earlier this year. As usual he had done good work on the research. I turned to his blog and read through his work on the pipe and the background information that he had gathered (https://rebornpipes.com/2021/07/24/helping-a-fellow-piper-with-his-dream-pipea-petersons-system-pipe/). I quote below from the section on his blog regarding the dating of the pipe.

While dating a Peterson’s pipe, I always fall back to my under mentioned favorite site; http://thepetersonpipeproject.blogspot.com/2007/07/dating-peterons-pipes.html

I quote from the above site.

During the years of Kapp and Peterson’s business operations, the country of Ireland has undergone several name changes and K&P’s stamping on their pipes reflects these changes. Knowing these changes, a Peterson pipe can be roughly dated and placed in “eras.”

With that information at hand I turned to work on the pipe itself. The bowl of the pipe was clean and did not have any cake. The finish was very clean so I did not need to scrub or clean that with the normal soap. I checked the inside of the shank, the sump and the airway in the stem with alcohol, cotton swabs and pipe cleaners. The surface of the stem was clean and free of oxidation so that was a bonus.

I restained the rim top and inner edges with a Black Sharpie Pen to blend it into the rest of the surrounding briar. The match was good.

I rubbed the bowl down with Before & After Restoration Balm. I worked it into the surface of the bowl sides and shank with my fingertips and a horsehair shoe brush. The product works to clean, enliven and protect the briar. I let the balm sit for a little while and then buffed with a cotton cloth to raise the shine. 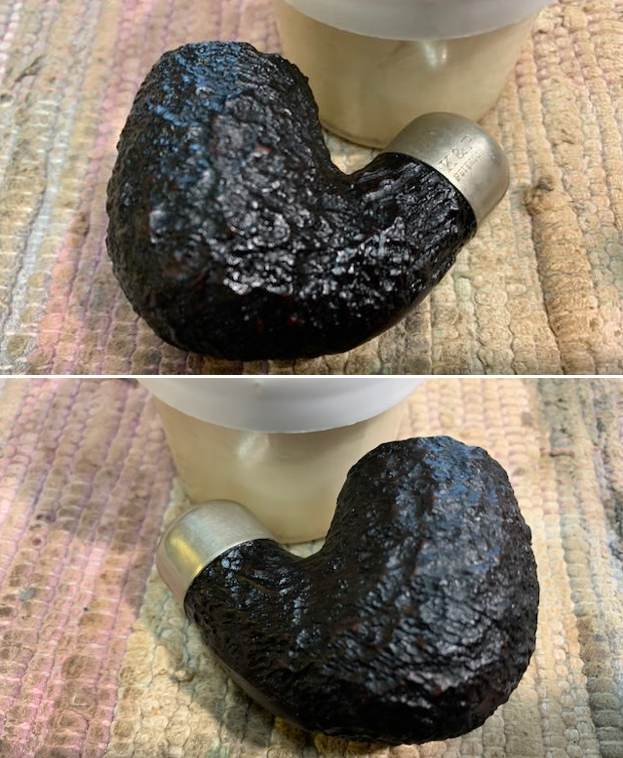 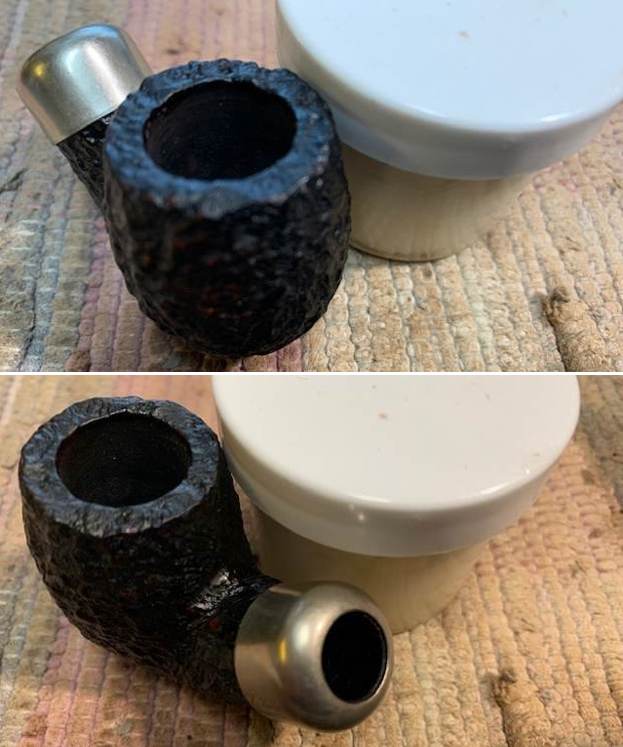 I polished the nickel ferrule with a jewelers cloth to remove the oxidation and give the nickle a shine. It came out looking pretty good.

I set the bowl aside and turned my attention to the stem. I “painted” the tooth marks on the surface with the flame of a lighter to lift them as much as possible. I was able to lift many of them but a few still remained. I filled in the remaining tooth marks with clear CA glue and set it aside to cure. 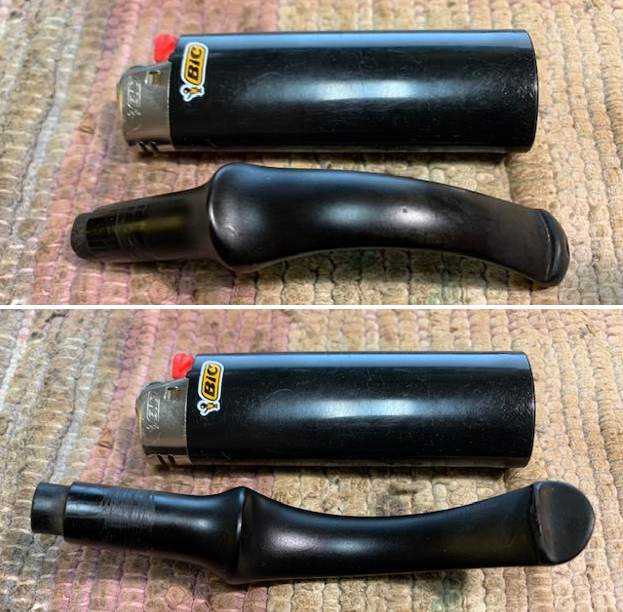 I sanded the repairs smooth with a folded piece of 220 grit sandpaper to begin blending them into the stem surface. I started the polishing with some 400 grit wet dry sandpaper.

I set the bowl aside and turned to work on the stem. I polished the stem with micromesh sanding pads – 1500-12000 grit pads. I wiped it down with Obsidian Oil after each sanding pad. I used Before & After Pipe Polish – both Fine and Extra Fine to further polish the stem. I gave it a final coat of Obsidian Oil and set it aside to dry.

This Republic Era Peterson’s System Standard 314 Rusticated Bent Billiard with a vulcanite stem is a great looking pipe now that it has been restored. The rugged rustication shows a lot of peaks and valleys and depth. The polished finish is stunning. I put the stem back on the bowl and carefully buffed the pipe with Blue Diamond on the buffing wheel. I gave the bowl multiple coats of Conservator’s Wax and the stem multiple coats of carnauba wax on the buffing wheel. I followed that by buffing the entire pipe with a clean buffing pad. I hand buffed the pipe with a microfiber cloth to deepen the shine. The finished Peterson’s System Standard Rusticated 314 fits nicely in the hand and feels great. Give the finished pipe a look in the photos below. The dimensions of the pipe are Length: 5 inches, Height: 1 ¾ inches, Outside diameter of the bowl: 1 1/8 inches, Chamber diameter: ¾ of an inch. The weight of the pipe is 45grams/1.59oz. This one has been reserved for first refusal. If you are interested in being in the queue for this pipe send me a message or an email. Thanks for reading this blog and my reflections on the pipe while I worked on it. There are many more to come! 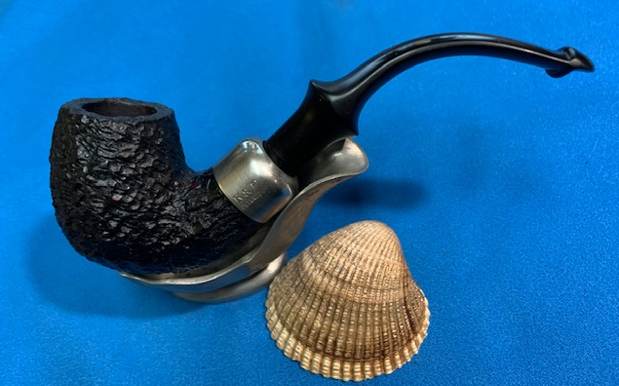 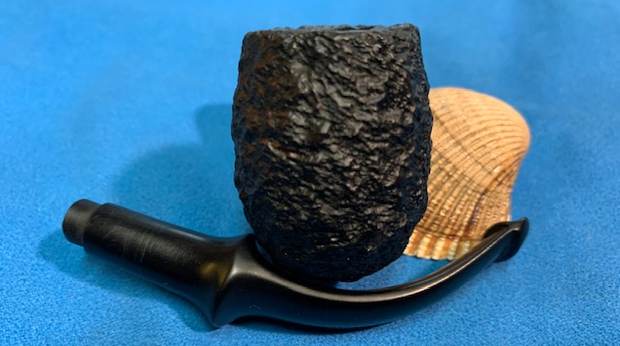 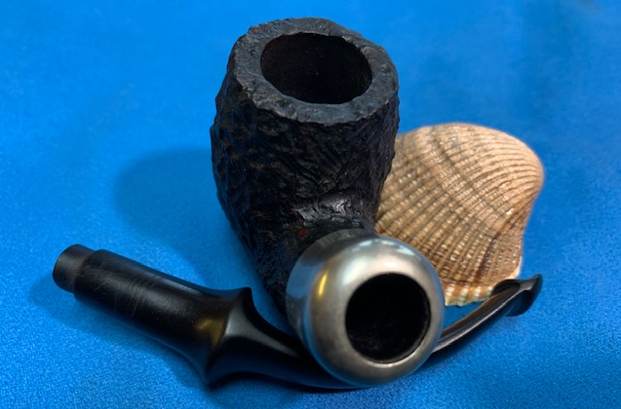