The next pipe has been here for a long time  – so long in fact that I cannot remember where I picked it up. I know it came to me from a trade or my own hunt because it had not been cleaned or reamed. It was surprisingly clean with a light cake in the bowl and some darkening on the rim top and inner edge of the bowl. The exterior of the pipe was quite clean and still had a wax shine. The stem was vulcanite and had sticky, smelly vanilla on the inside and outside as well. The bowl had a thick cake and there were light tooth marks on both sides of the stem near the button. The pipe was stamped on the underside of the shank and read 109 on the heel of the bowl followed by Brigham in script [over] Canada. The vulcanite taper stem had a single brass dot on the left side. Here is the pipe! 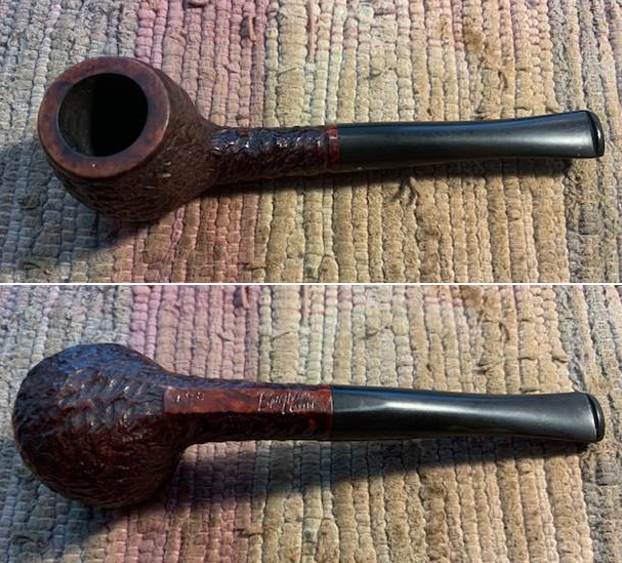 I took close up photos of the rim/bowl and stem. The cake in the bowl was thin and there was some darkening on the rim edge. The stem was quite clean and had some light oxidation and there were light tooth marks on the top and underside near the button.

I took photos of the stamping on the underside of the shank and it is clear and readable as noted above.

I removed the stem from the shank which was a sticky chore and took a picture of the pipe. It is quite an attractive shape and should clean up well.

For historical background for those unfamiliar with the brand I am including the information from Pipedia on Brigham pipes. It is a great read in terms of the history and background on the pipes (https://pipedia.org/wiki/Brigham_Pipes). Charles Lemon (Dadspipes) is currently working on a book on the history of the brand. Until that is complete this article is a good summary. I have included it below.

Charles Lemon has also written a great article on the stampings and marking on the Brigham pipes that fit into a time line that he has drafted. It is well worth a read and is fascinating. (https://pipedia.org/wiki/Brigham_Pipes_%E2%80%93_A_Closer_Look_at_Dots,_Dates_and_Markings). I quote from the pertinent section on the time frame for this pipe.

I have dubbed the decades between 1980 and 2000 the Late Canadian Era, a period that saw several changes at Brigham that are of note to the collector. First, the traditional 8-grade pinning system (the famous Brigham “Dots” which denoted the quality of the pipe) was changed to a 7-grade system to simplify pinning (more on this below), and the Norsemen and Valhalla series were merged to form the President Series, which represented the very finest pipes coming out of the Toronto factory. Early pipes from this era (left, below) are stamped with a shape number and “Brigham” over “Canada”; later pipes (late 1980s+, on right below) are stamped simply with a shape number and the Brigham logo.

This solidly places the pipe I am working on in the period of Brigham production that Charles calls the Late Canadian Era (1980-2000). It is a great looking pipe with an older style rustication pattern than the later Brighams that I have worked on.

Charles also put together a chart that helps the restorer to understand the Brigham dot system. I quote from the same link on Pipedia as noted above.

Brigham changed the Dot system in 1980, adding a 7 Dot at the top of the line, dropping the names of each series and eliminating the confusing vertical and horizontal 3 Dot configurations. The Norsemen and Valhalla series were combined to form the President series of freehand pipes, which adopted a 3 Dot pattern with a larger dot on the right as shown below. The 7- grade pinning system stayed in place from 1980 to 2001.

I knew that I was dealing with a pipe made between 1980-2000 from the Late Canadian Era. It sports 1 dot making it Brigham Series 100 pipe with a 3 digit shape number 103. Now to do a bit of spiffing with the pipe itself.

I used a Savinelli Fitsall pipe knife to remove the light cake from the bowl walls. It was uneven and needed to be removed so I took it back to bare briar. I sanded the bowl with a dowel wrapped with 220 grit sandpaper to smooth out the walls.

I used a folded piece of 220 grit sandpaper to clean up the inner edge of the bowl. It looked far better once it was finished.

I polished the briar on the rim top with micromesh sanding pads – dry sanding it with 1500-12000 grit pads. I wiped the briar down with a damp cloth to remove the sanding dust. The briar really took on a rich shine with the polishing.

I rubbed the bowl down with some Before & After Restoration Balm. I worked it into the briar with my finger tips and a horse hair shoe brush to clean, revive and preserve the wood. It really brings the grain alive once again. I let it sit for 15 minutes then buffed it off with a soft cloth. The grain really pops at this point in the process.

I set the bowl aside and worked on the stem. I polished the stem with micromesh sanding pads – dry sanding with 1500-12000 grit pads. I wiped the stem down between each pad with some Obsidian Oil. I finished polishing it with Before & After Pipe Stem Polish – both Fine and Extra Fine to deepen the shine. I gave it a final wipe down with Obsidian Oil. 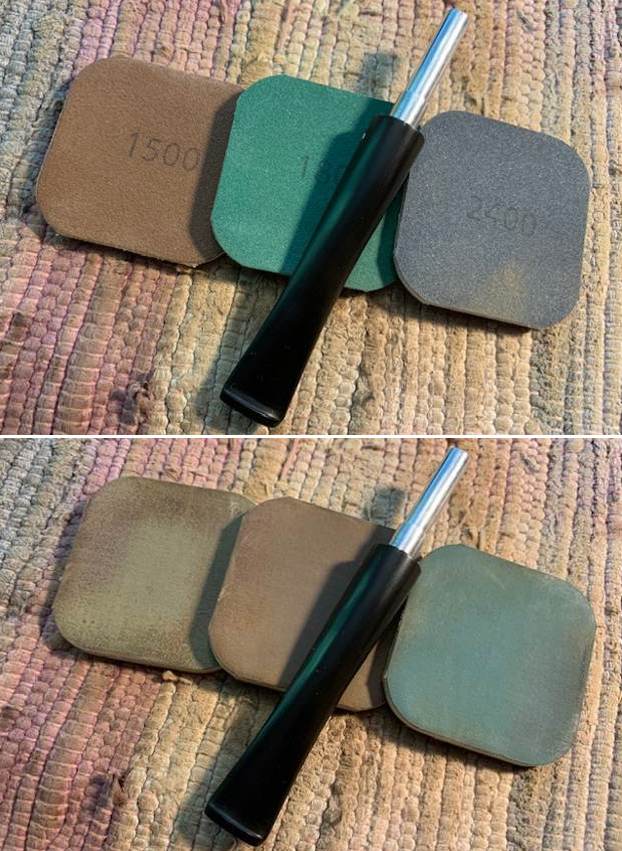 I pulled out a new Rock Maple Distillator for tenon and insert it in place before putting the stem on the shank. 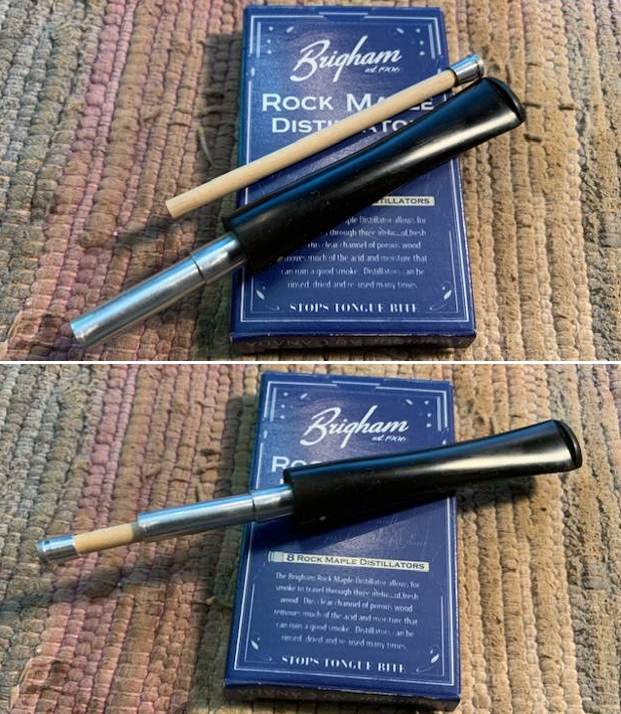 I like working on Brigham pipes so I was happy to see the finished pipe. I put the Brigham Canada 109 Apple back together and buffed it with Blue Diamond on the buffing wheel. I gave the bowl and the stem multiple coats of carnauba wax. I buffed the pipe with a clean buffing pad and hand buffed it to raise the shine. It is fun to see what the polished bowl looks like with dimensions of the rustication popping around the bowl and shank. Added to that the polished vulcanite taper stem was a beautiful touch. It is light and well balanced. Have a look at it with the photos below. The dimensions are Length: 6 inches, Height: 1 ½ inches, Outside diameter of the bowl: 1 1/8 inches, Chamber diameter: ¾ of an inch. The weight of the pipe is 39 grams/1.38 ounces. It is a beautiful pipe and one that will be on the rebornpipes store in the Canadian Pipemakers section. If you are interested in adding it to your collection let me know. Thanks for walking through the restoration with me as I worked over this pipe. Thanks to each of you who are reading this blog. I want to keep reminding us of the fact that we are not pipe owners; we are pipemen and women who hold our pipes in trust until they pass on into the trust of the next trustee. 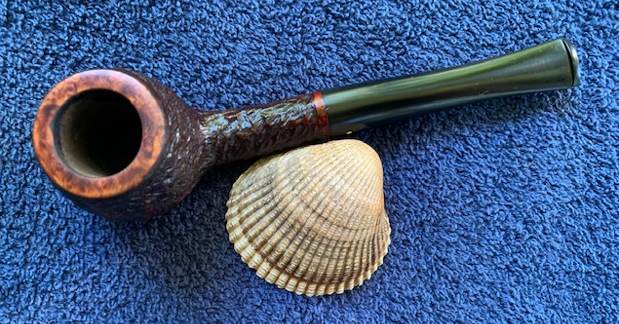 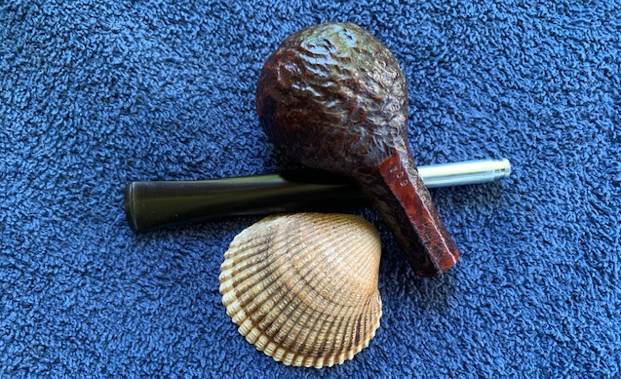 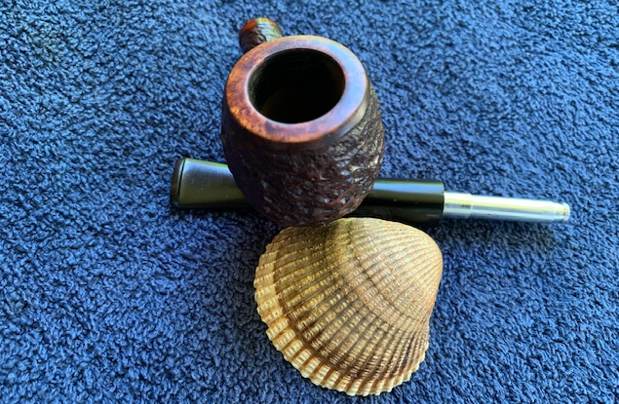 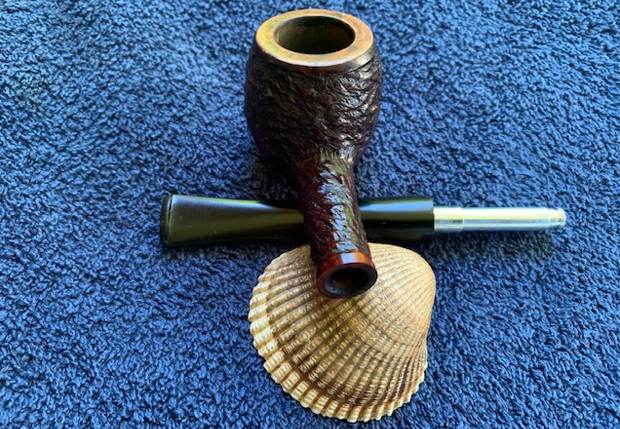