The next pipe I have chosen to work on came to me as a referral from a local pipe shop here in Vancouver. While I am not taking on work via mail I am still doing the repairs for this pipe shop. This one was a smooth finished Peterson’s Billiard bowl. It needed to have a stem fit to the shank so the fellow could smoke it again. It had not had a stem since the 70s. He decided it was time to get it back in order. He says he is a bit older than me and in our conversation it turns out that we are pretty close to the same age. He does not drive, no computer and no cell phone. We chatted a bit on his land line and decided a regular slotted stem would work for the pipe as I did not have any straight (or bent for that matter) Peterson’s stems. It had originally been offered with a choice of stems anyway. The finish is was dirty. I can see sand pits on the left side of the bowl but other than that it was in decent condition. It was stamped on the  left side of the shank and read SHAMROCK. It was stamped to the right of the shank and reads “A PETERSON’S [over] PRODUCT” over MADE IN IRELAND (3 lines) with the shape number X105 next to the bowl. The bowl had been reamed recently and the inner edge was nicked in several spots. The rim top was covered with a lava coat. I took a few photos of the pipe when I removed it from the shipping envelope.

I took a close up photo of the rim top and bowl to show the general condition of the pipe. The bowl looks to have been reamed recently but the rim top and edges have some lava overflow.

I took photos of the sides of the shank to show the stamping. The stamping is readable in the photos below and is as noted above.

Judging from the description above, the pipe I am working on is stamped with the stamp noted in red above. It reads “A Peterson’s Product” over Made in Ireland which narrows the date to between approximately 1945-1965. It is just stamped SHAMROCK with no brand name and no stem.

Now it was time to work on the pipe. I went through my can of stems and found a fishtail stem that would work with a little adjustment to the diameter at the band. The stem was in very good condition.

I laid aside the stem and turned my attention to the bowl. I worked on the thickly lava coated rim top and edges with a folded piece of 220 grit sandpaper. I was able to remove the lava and I worked over the inner edge with the sandpaper. Once finished I reamed the bowl with a Savinelli Fitsall Pipe knife to remove the remnants of cake in the bowl.

I scrubbed the externals of the bowl and rim with undiluted Murphy’s Oil Soap and a tooth brush. I rinsed the bowl with warm running water to remove the soap and the grime. The scrubbing left the surface very clean.

I decided to leave the sandpits on the bowl side and filling them seemed unnecessary to me. I polished the briar with micromesh sanding pads – dry sanding with 1500-12000 grit sanding pads. I wiped the bowl down with a damp cloth after each sanding pad. 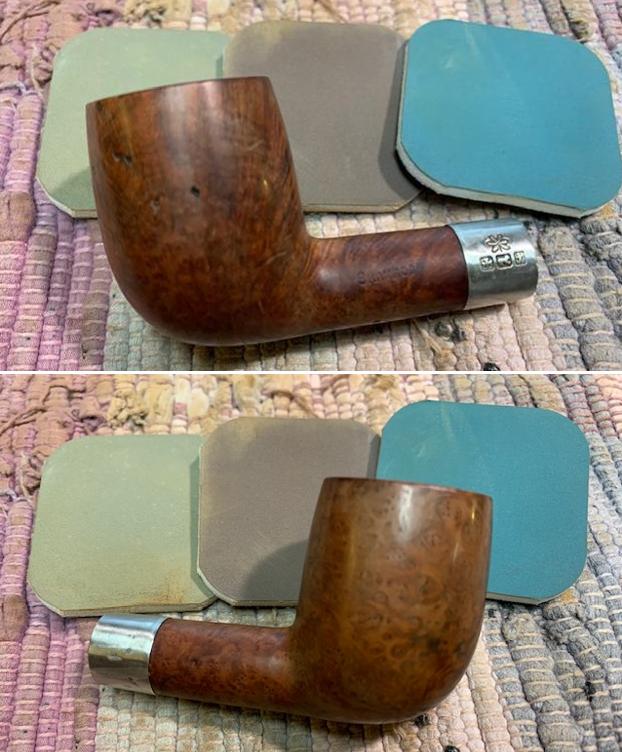 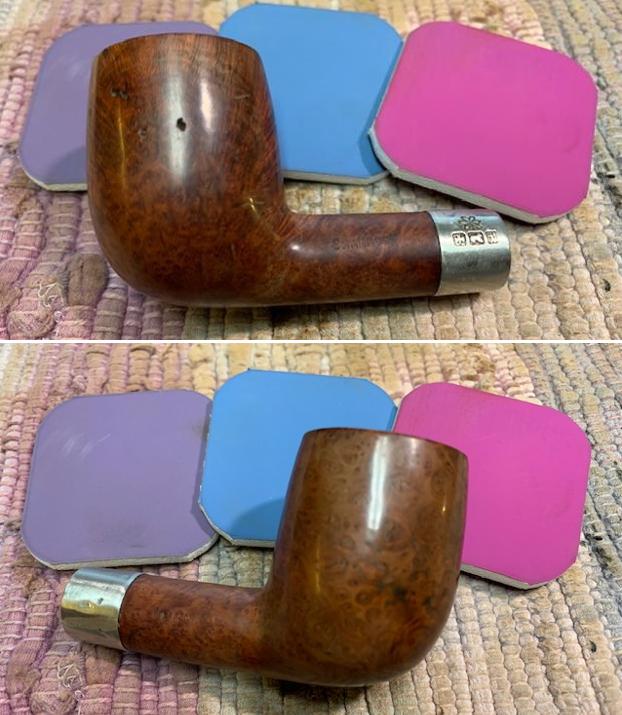 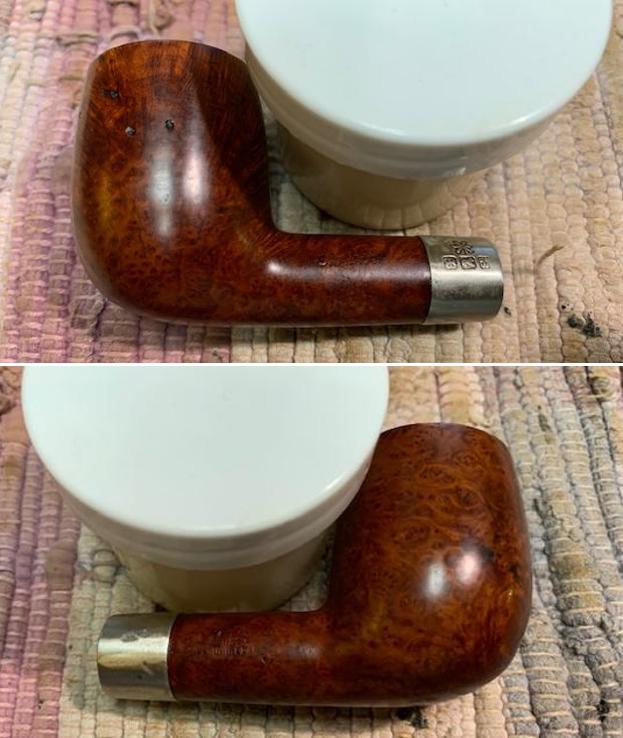 I sanded the diameter of the stem at the shank end with 220 grit sandpaper to take down the left side so that it matched the side of the band on the shank. I worked it over until the flow between the nickel band and the stem was smooth. I started the polishing with 400 grit wet dry sandpaper.

I am excited to finish this Nickel Banded Older Peterson’s Shamrock X105 Straight Billiard. I put the pipe back together and buffed it with Blue Diamond on the buffing wheel. I gave the bowl and the stem multiple coats of carnauba wax. I hand buffed the pipe with a clean buffing pad to raise the shine. It is fun to see what the polished bowl looks like with beautiful flame grain all around it. Added to that the polished Sterling Silver band and the black vulcanite stem was beautiful. This smooth Classic Shamrock X105 Billiard is great looking and the pipe feels great in my hand. It is light and well balanced. Have a look at it with the photos below. The dimensions are Length: 5 ¾ inches, Height: 1 ¾ inches, Outside diameter of the bowl: 1 ¼ inches, Chamber diameter: ¾ of an inch. The weight of the pipe is 46 grams/1.62 oz. It turned out to be a beautiful pipe. I will be packing it up on the weekend and getting it ready to go back to the pipeman who sent it to me to be restemmed. Thanks for your time and as Paresh says each time – Stay Safe.