The next pipe on the work table came to us from an online auction from Hermann, Missouri, USA. It is a rusticated Peterson’s Sherlock Holmes line pipe with a tapered vulcanite stem. The pipe is stamped on the underside of the shank and reads Peterson’s [over] Sherlock Holmes [over] Rathbone. That is followed by the stamping Made in the Republic of Ireland. This is a nicer piece of briar than I have seen on some of the firsts I have worked on. The finish had a lot of grime ground into the rusticated finish on the bowl. The bowl was heavily caked and there was a lava coat and the inner edge of the rim. The edges looked okay but we would know more after the cleanup. The stem was oxidized, calcified and had tooth chatter and marks on the top and underside near the button. There a silver P glued onto the left side of the taper stem. The Sterling Silver Band is stamped with the profile of Sherlock Holmes with Sterling Silver above and below the profile. Under that it has three hallmarks that will identify the year the pipe was made. The pipe showed promise but it was very dirty. Jeff took photos of the pipe before he started his cleanup work. 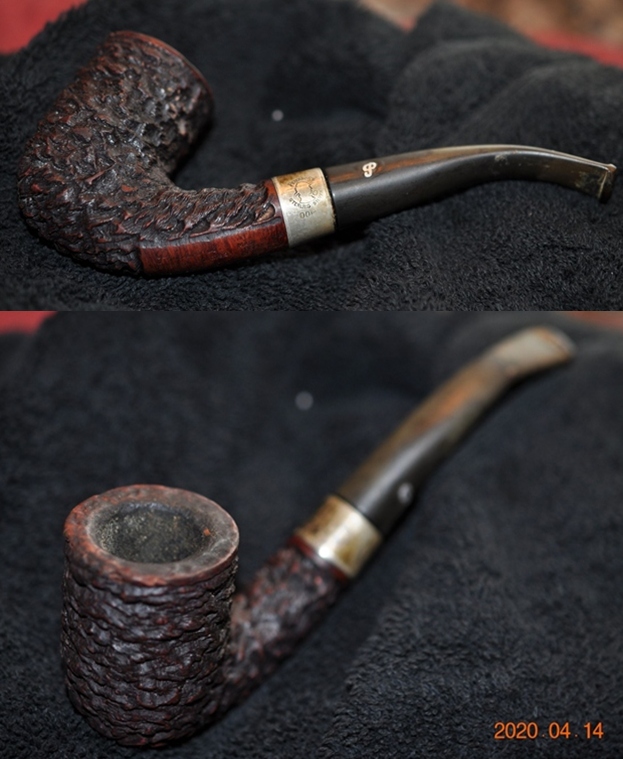 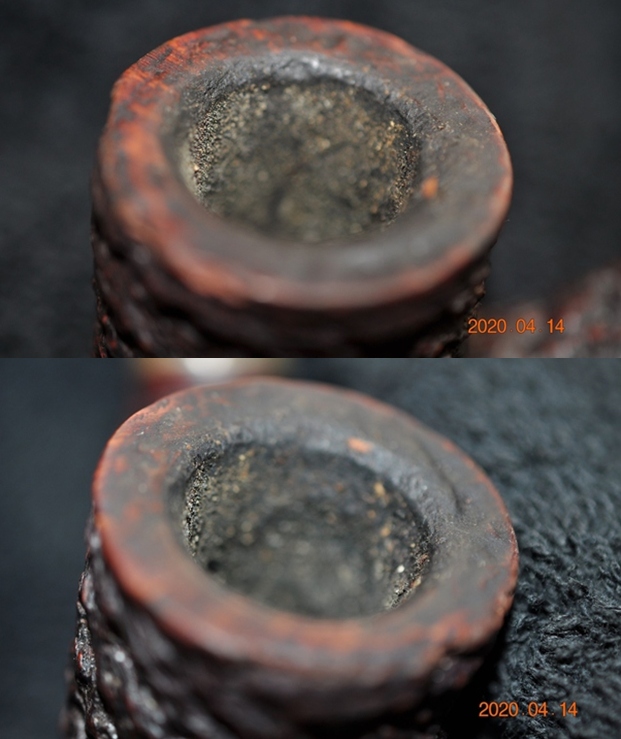 Jeff took photos of the sides and heel of the bowl to give a picture of what the briar around the pipe looked like. It is a craggy and rugged rustication. 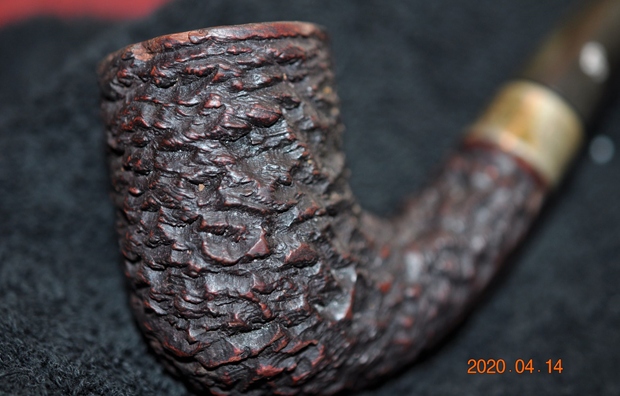 He took photos of the stamping on the shank and the Sterling Silver band. It reads as noted above and is clear and readable. You can also see the Silver P on the side of the stem. It appears to be loose and lifted from the stem surface. 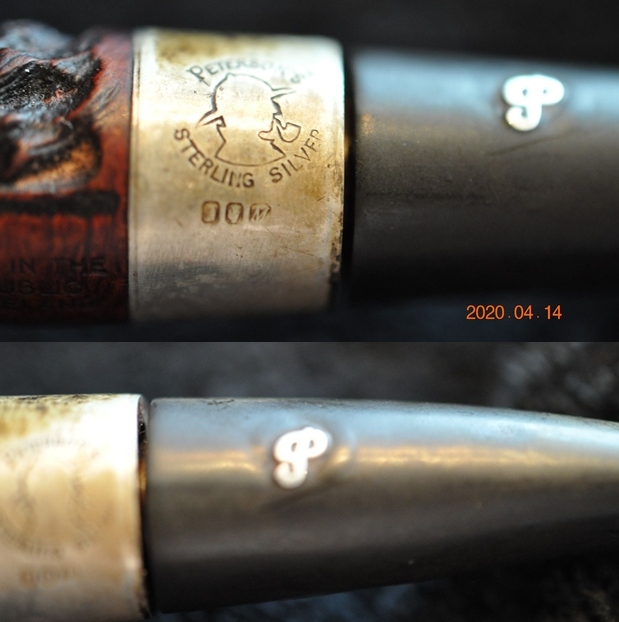 The Sterling Silver band on the shank had the classic Peterson’s Hallmarks. The first mark was the seated Hibernia with her arm on a harp representing Ireland as the country of manufacture. The second mark was a crowned harp used to identify the quality of the silver. The third mark was a slanted capital M that gave the date the pipe was made.

1950 – 1989 The Republic Era – From 1950 to the present time, the stamp for this era is “Made in the Republic of Ireland” in a block format generally in three lines but two lines have been used with or without Republic being abbreviated.

The Sherlock Holmes Series: Probably the most popular and successful series of pipes ever produced by Peterson. Including the Meerschaum version of the seven day sets. Both briar and Meers can be purchased either as individual pipes or complete seven day sets and stands. Expect to pay around $250 for briars and $300 for individual Meerschaums. The Adventures of Sherlock Holmes runs around $1000 for a 4 pipe boxed set. Complete 7 day sets and stands can be up to $1500 – $2000.

That was followed by the second series the Return of Sherlock Holmes.

I turned to the article on dating Peterson pipes on Pipedia to see if I define the time frame of the Return of Sherlock Holmes Series and it dated it at approximately 1991 (https://pipedia.org/wiki/A_Peterson_Dating_Guide;_A_Rule_of_Thumb#Silver_Band_Dating). That fit this pipe well as it is dated 1998. It clearly links it to the Second or Return of Sherlock Holmes series,

I knew that I was dealing with a Republic Era pipe made between 1950-and the present – a Late Republic pipe. It was a rusticated bent billiard that came out as part of the Return of the Sherlock Holmes Series in 1998. The finish was stained with a combination of brown and black stains. Now it was time to work on the pipe.

Jeff had cleaned up the pipe with his usual penchant for thoroughness. He reamed the pipe with a PipNet Pipe Reamer and cleaned up the remnants with a Savinelli Fitsall Pipe Knife.  He scrubbed the bowl with undiluted Murphy’s Oil Soap with a tooth brush. He rinsed it under running warm water to remove the soap and grime. He cleaned out the inside of the shank and the airway in the stem with alcohol, cotton swabs and pipe cleaners. He soaked the stem in Before & After Deoxidizer and rinsed it off with warm water. I took photos of the pipe once I received it.  (The plastic bag in the bowl contains the silver P which fell off in the clean up.)

I took a photo of the stamping on the shank. It is clear and readable as noted above. The second photo shows the spot were the silver P was inset into the vulcanite. I would need to reset the P.

I removed the stem and took a photo of the pipe to give a sense of the whole. The stem is tapered.

I started my work on the pipe by addressing the loose P logo that needed to be reset in the stem surface. You can see where someone tried to reset it with heat and damaged the vulcanite around the P. I daubed the surface of the P stamp with all clear CA glue and pressed the P into the shape on the stem surface. I set the stem aside while I worked on the bowl. 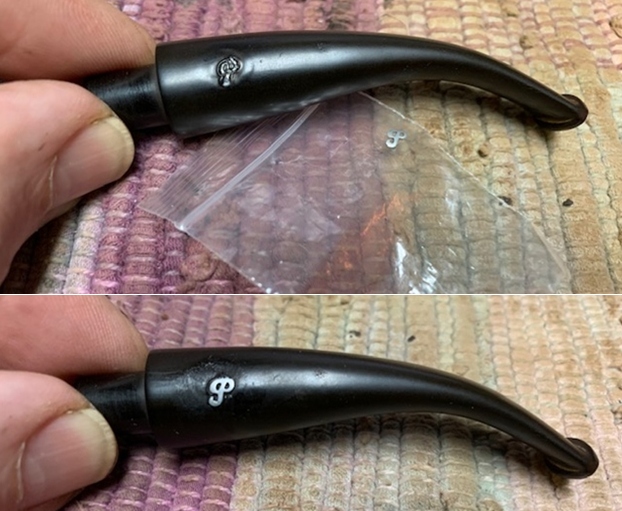 I cleaned up the darkened and damaged beveled inner edge of the bowl with a folded piece of 220 grit sandpaper. Once I had the bevel finished I polished it with 1500-2400 grit micromesh pads and wiped off the dust. I restained it with a Walnut Stain pen to match the rest of the bowl finish. 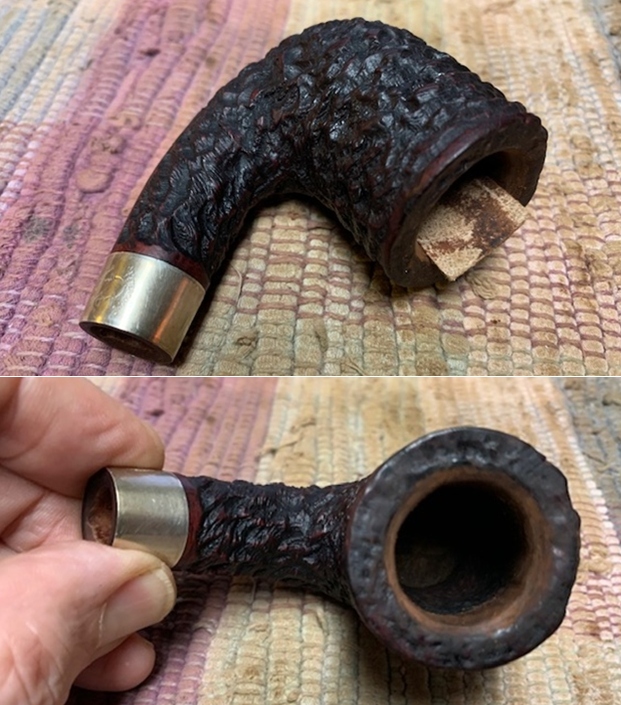 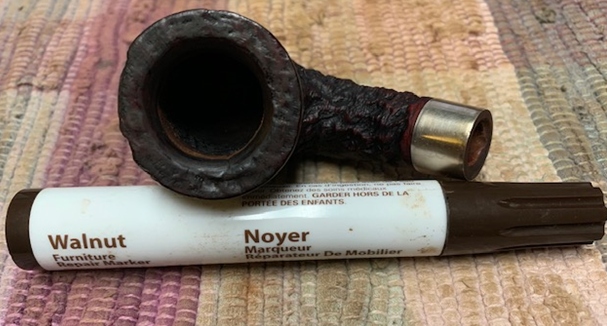 With the rim cleaned up the bowl was in good condition. I rubbed it down with Before & After Restoration Balm. I worked it into the surface of the bowl sides and shank with my fingertips and worked it into the nooks and crannies of the rustication with a horsehair shoebrush. The product works to clean, enliven and protect the briar. I let the balm sit for a little while and then buffed with a cotton cloth to raise the shine.

I set the bowl aside and turned to work on the stem. I smoothed out the damage to the vulcanite around the P with a new 1500 grit micromesh pad. I was able to remove the damage and the stem looked good.  I polished the vulcanite stem with micromesh sanding pads – 1500-12000 grit pads. I wiped it down with a damp cloth after each sanding pad. I used Before & After Pipe Polish – both Fine and Extra Fine to further polish the stem. 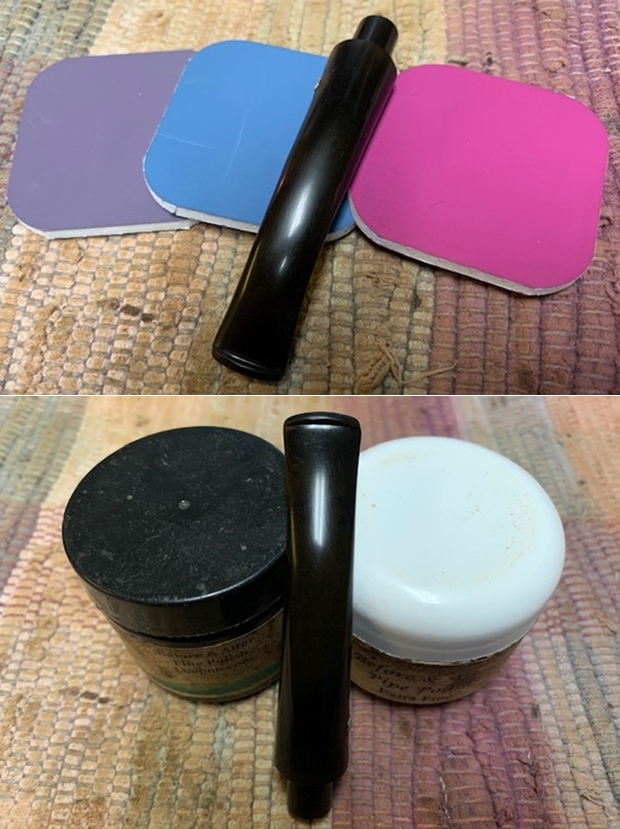 This Return of Sherlock Holmes Series Rathbone Bent Tall Billiard with a vulcanite taper stem is a great looking pipe now that it has been restored. The rugged rustication feels great in the hand and should only feel better as the pipe is smoked. I put the stem back on the bowl and carefully buffed the pipe with Blue Diamond on the buffing wheel using a light touch being careful around the silver P and gentle on the rusticated briar. I gave the bowl multiple coats of Conservator’s Wax and the stem multiple coats of carnauba wax on the buffing wheel and followed that by buffing the entire pipe with a clean buffing pad. I hand buffed the pipe with a microfiber cloth to deepen the shine. The finished Sherlock Holmes Rathbone fits nicely in the hand and feels great. Give the finished pipe a look in the photos below. The dimensions of the pipe are Length: 5 ¾ inches, Height: 2 ¼ inches, Outside diameter of the bowl: 1 ½ inches, Chamber diameter: ¾ of an inch. The weight of the pipe is 53gr/1.87oz. If you are interested in adding this pipe to your collection send me a message or an email. Thanks for reading this blog and my reflections on the pipe while I worked on it. There are many more to come! 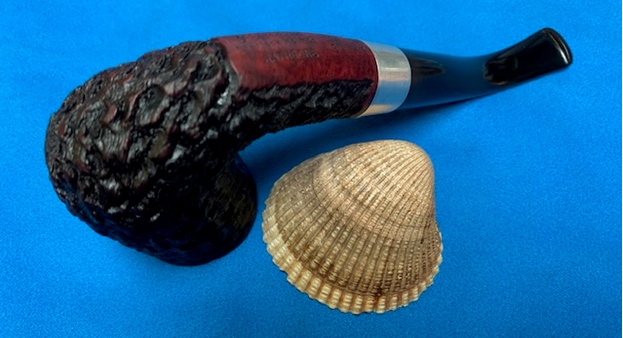 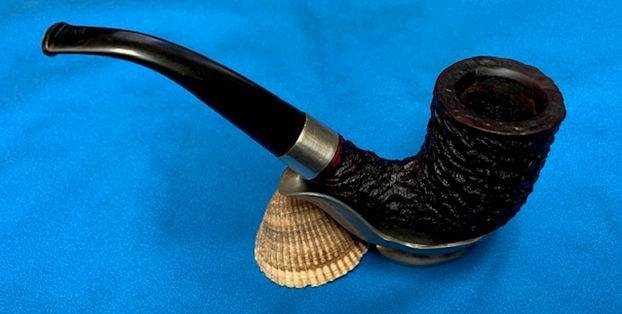 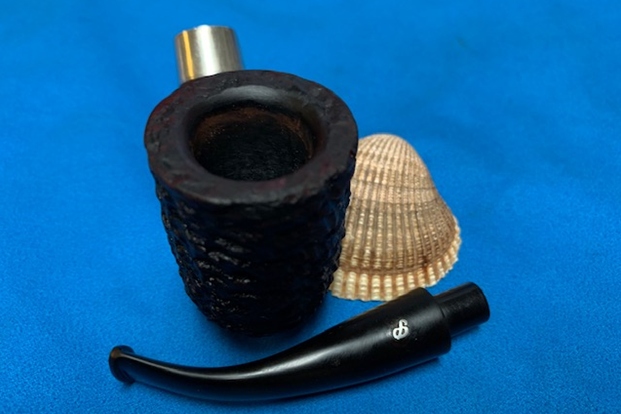