The next pipe on the table came to us from one of Jeff’s pipe hunts and turns out to be a catalogue pipe from Norm Thompson in Portland, Oregon. It is a Norm Thompson Billiard that is in decent condition. It is stamped with a Ram’s Head logo over Norm Thompson on the top left side of the shank. On the right side it is stamped Made in England. That is followed by the shape number 15. The stamping is clear and readable. The pipe has a medium brown finish and overall some nice grain that the shape follows well. The finish had a shellac or varnish coat and it was very dirty with grime ground into the shiny finish of the bowl. The bowl had a thick but even cake in the bowl and some light lava overflow on the beveled inner edge of the top. There was darkening on the briar around the inner beveled edge and the top of the rim. The stem was in surprisingly good condition. There was not a tooth mark and there was no chatter to be found on the stem. Jeff took photos of the pipe before he cleaned it up.

Jeff took photos of the rim top to show the thick cake in the bowl and the lava overflow on the beveled inner edge of the rim. The photos show the dark spots on the rim top.

Jeff took some photos of the bowl sides and heel to show the nice grain that was on this bowl. It is a nice looking pipe. 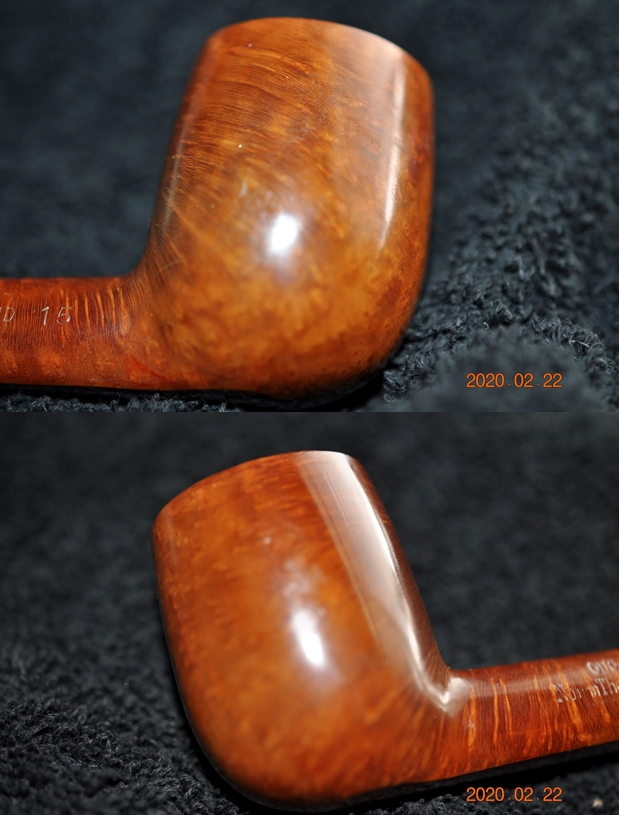 The stamping on each side of the shank is shown in the photos below. They look very good and readable.

The stem was a very good fit to the shank. It was oxidized, calcified and had debris stuck to the surface of the vulcanite. It was otherwise free of damage. 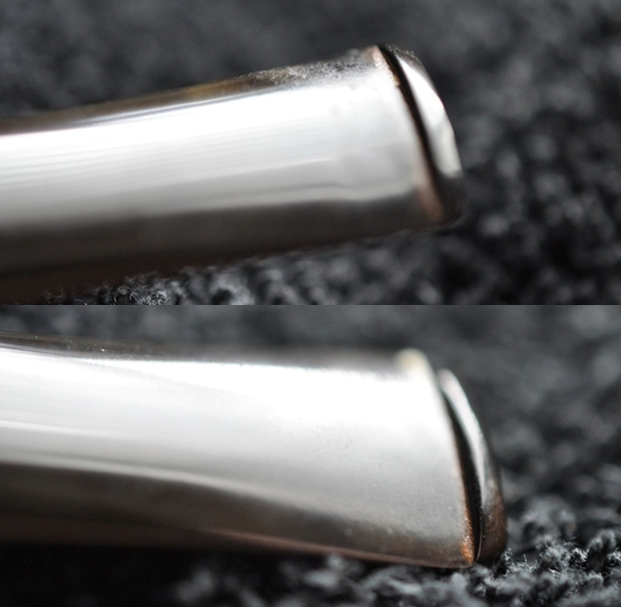 I found a discussion on Pipesmagazine.com about the brand and one of the responders gave some helpful information on the brand (https://pipesmagazine.com/forums/threads/thompson-pipes.72989/). I quote the section:

A USA Norm Tompson was started in Portland, Oregon. Here’s a brief history:

The company was founded by namesake Norman Anchor Thompson, Sr. in 1949 as a way to sell his homemade flies for fly-fishing.[6][7] An immigrant from Britain, he had settled in Salt Lake City before fighting for Canada in World War I.[7] After the war he lived briefly in Los Angeles before settling in Portland where he owned seven pipe shops and later two nightclubs during World War II.[7] Thompson retired after the war as owner of the nightclubs and tobacco shops.[6]

He started the new business as a mail order only business by placing an advertisement in Field & Stream,[8] and around 1951 handed it over to Peter Alport, his son-in-law.[6][7] Alport was in advertising in New York City where he owned Parma Advertising.[6] He worked to expand the company’s product offerings beyond fly-fishing items and into clothing and other outdoor merchandise, plus he developed the company’s slogan of Escape from the ordinary.[6] During his tenure, Norm Thompson opened its first retail store in 1959, located in Northwest Portland.[6] Namesake Norm Thompson died in 1968 from complications related to his exposure to mustard gas during his World War I military service in Europe.[7]

A unique pipe with lots of history!

From there I turned to search the company on the net and found a long article on the brand on Wikipedia (https://en.wikipedia.org/wiki/Norm_Thompson_Outfitters). I quote a part of the article below.

Norm Thompson Outfitters is a privately owned catalog and internet retailer based in Middleton, Massachusetts [3] that was previously based in Hillsboro, Oregon, United States until September 2016.[4] The Norm Thompson offices were closed and consolidated due to Bluestem’s acquisition of their parent company, Orchard Brands, in July 2015.[5] Founded in 1949 by Norman A. (Norm) Thompson as a mail order business, it grew to annual sales of $200 million before it was sold to Golden Gate Capital Partners in 2006. The company sells clothing, gadgets, furniture, kitchen items, and gift items from its namesake catalog as well as from its Solutions and Sahalie brands. John Difrancesco serves as president and chief executive of the 500 employee company.

I followed another link to an article on the brand that identified the company with seven pipe shops in the Portland area (https://alchetron.com/Norm-Thompson-Outfitters). I quote:

The company was founded by namesake Norman Anchor Thompson, Sr. in 1949 as a way to sell his homemade flies for fly-fishing. An immigrant from Britain, he had settled in Salt Lake City before fighting for Canada in World War I. After the war he lived briefly in Los Angeles before settling in Portland where he owned seven pipe shops and later two nightclubs during World War II. Thompson retired after the war as owner of the nightclubs and tobacco shops.

I knew that I was dealing with a Norm Thompson 15 Billiard that was specially made for the Outfitters by a pipemaker in England. It is not clear who made the pipes for them. I turned to work on the pipe itself. Jeff had done a great job cleaning up the pipe as usual. He reamed the pipe with a PipNet reamer and cut back the cake back to the bare briar. He cleaned up the walls with a Savinelli Fitsall Pipe Knife. He scrubbed the interior of the bowl and shank with pipe cleaners, cotton swabs and alcohol to remove the tars and oils. He scrubbed the exterior of the pipe with Murphy’s Oil Soap and a tooth brush to remove the grime from the finish. He worked on the rim top lava and darkening with the soap and tooth brush. He was able to remove the varnish or shellac coat in his clean up of the bowl. He scrubbed the inside of the stem with alcohol and pipe cleaners. He scrubbed the exterior with Soft Scrub and then soaked it in Before & After Deoxidizer. He washed it off with warm water to remove the deoxidizer. The pipe looked far better. I took photos of the pipe when I received it before I started working on it. 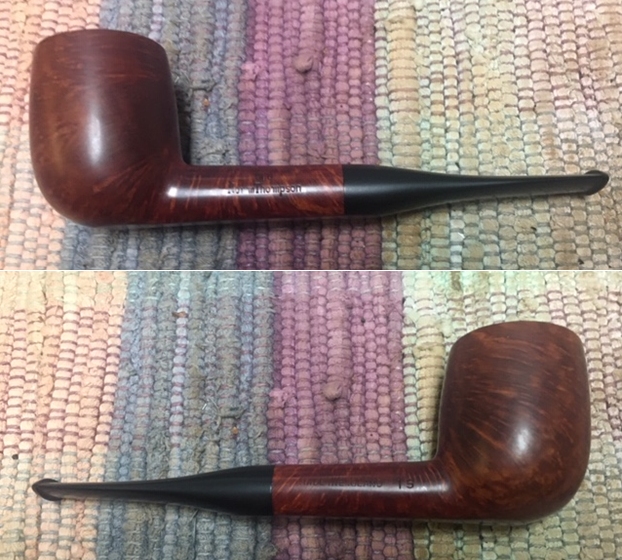 I took photos of the bowl and rim top as well as the stem to show how clean they were. You can see the darkening on the inner edge of the rim and the top on both sides.  The stem looks clean of oxidation and the tooth marks and chatter are very clear in the photos.

I took photos of the stamping on the sides of the shank. The stamping is clear and readable as noted above. 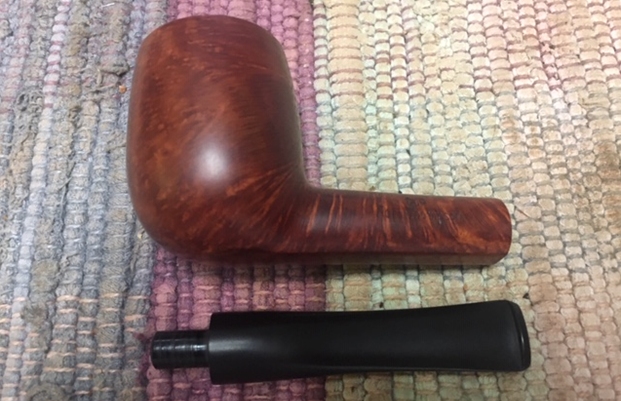 I polished the briar with micromesh sanding pads – dry sanding with 1500-12000 grit pads and wiping the bowl down with a damp cloth after each pad. 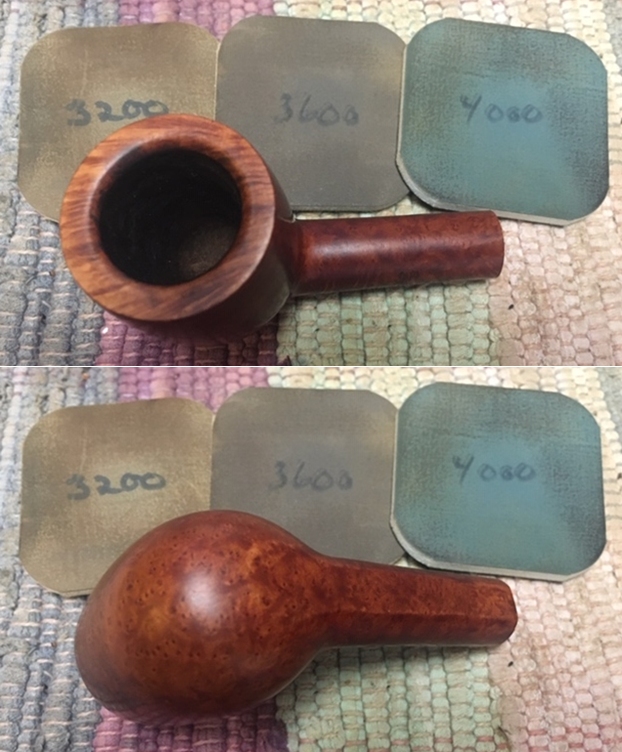 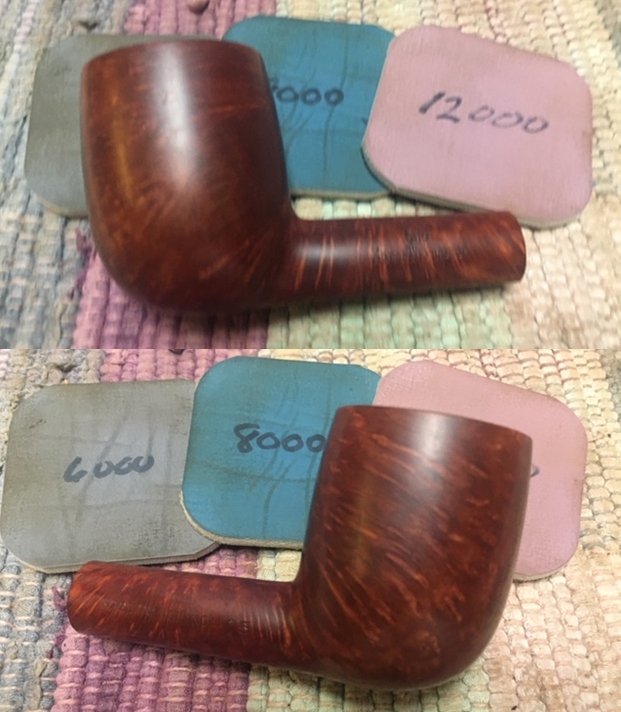 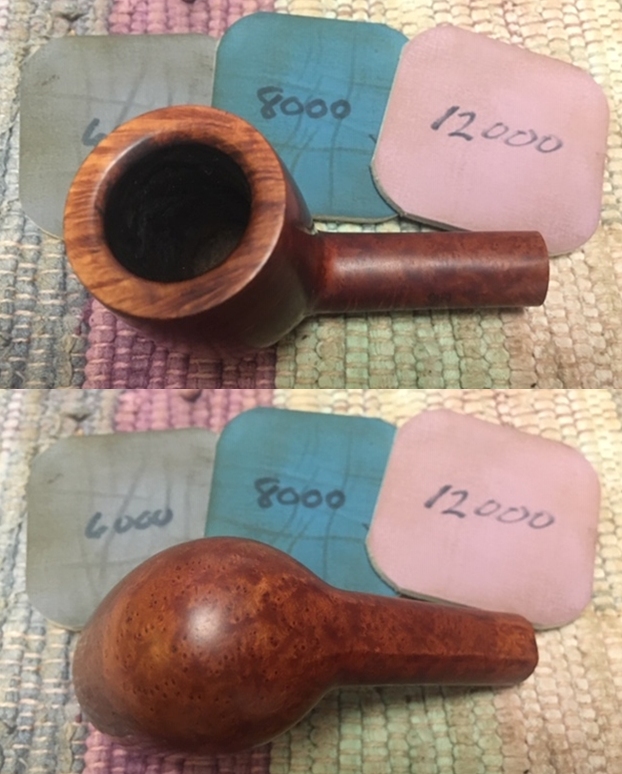 I rubbed the briar down with Before & After Restoration Balm. I worked it into the briar with my fingertips. The product works to clean, enliven and preserve the briar. I let it sit for 10 minutes while I worked on the stem. After the time passed I buffed it with a cotton cloth to deepen the shine. The briar really comes alive with the balm. 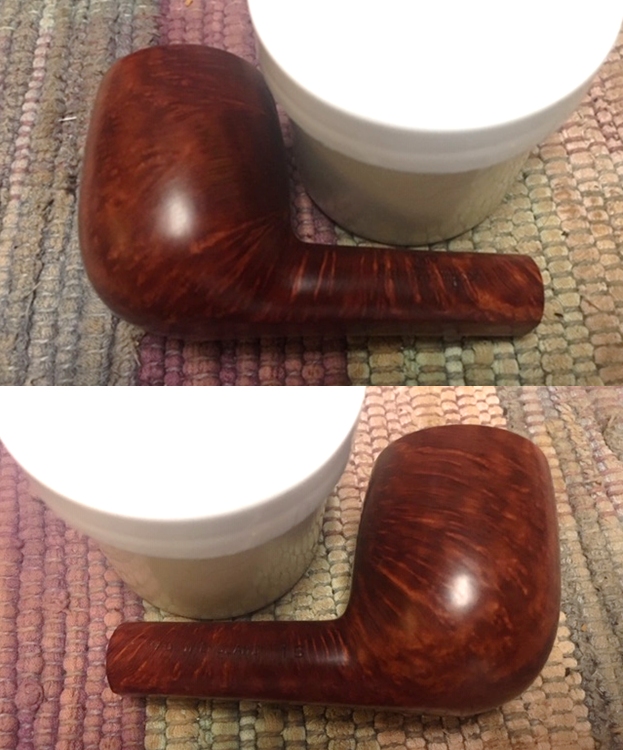 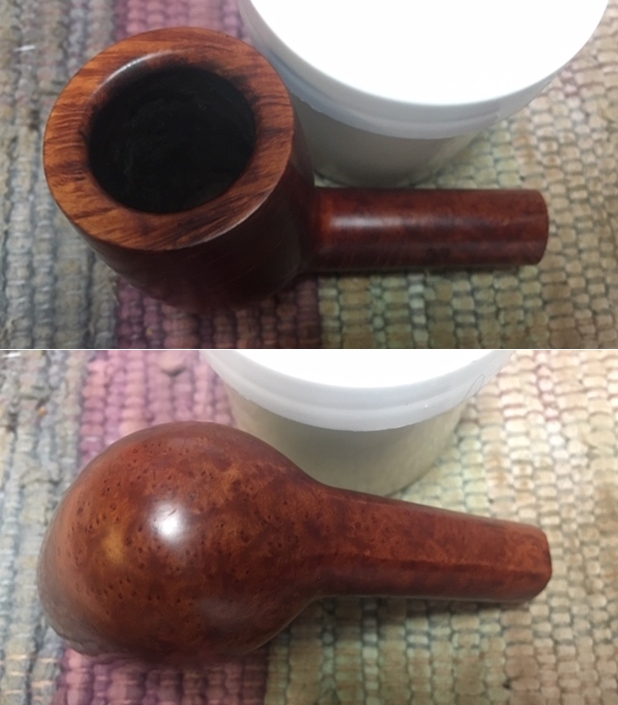 I set the bowl aside and turned my attention to the stem. I polished the vulcanite with micromesh sanding pads – 1500-12000 grit pads. I wiped it down with Obsidian Oil after each sanding pad. I used Before & After Pipe Polish – both Fine and Extra Fine to further polish the stem. 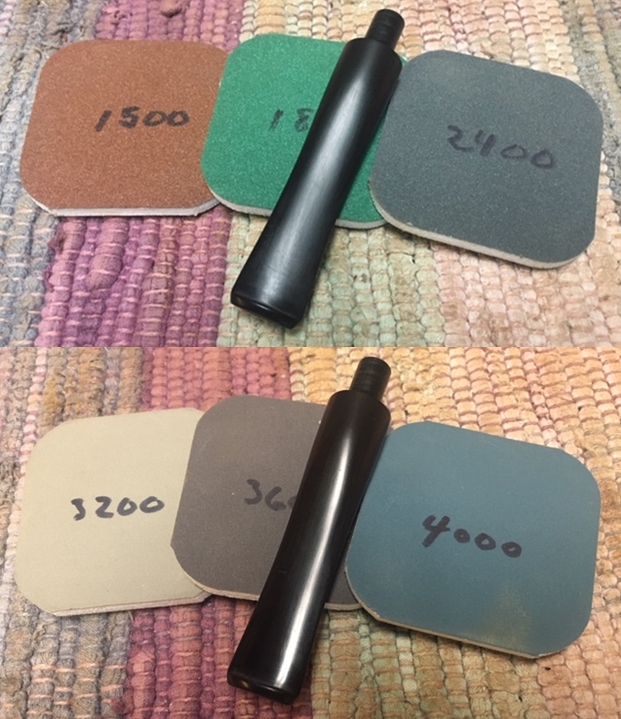 This Norm Thompson 15 English Made Billiard is a nice looking pipe. The Medium Brown stain highlights some mixed grain around the bowl sides and the heel. The finish on the pipe is in excellent condition and the contrasting stains work well to highlight the grain on the pipe. The polished black vulcanite taper stem adds to the mix. With the grime and debris gone from the finish and the bowl it is eye-catching. I put the stem back on the bowl and buffed the pipe with Blue Diamond on the buffing wheel. I gave the bowl and the stem multiple coats of carnauba wax on the buffing wheel and followed that by buffing it with a clean buffing pad. I hand buffed the pipe with a microfiber cloth to deepen the shine. The finished Norm Thompson 15 Billiard is quite nice and feels great in the hand. It is also a sitter with a flat bottom. Give the finished pipe a look in the photos below. The dimensions of the pipe are Length: 5 ¾ inches, Height: 2 inches, Outside diameter of the bowl: 1 ¼ inches, Chamber diameter: 7/8 of an inch. Thanks for walking through the restoration with me as I worked over another beautiful pipe. This pipe will be added to the British Pipe Makers section of the rebornpipes store soon. If you want to add it to your collection send me an email or a message! Thanks for your time. 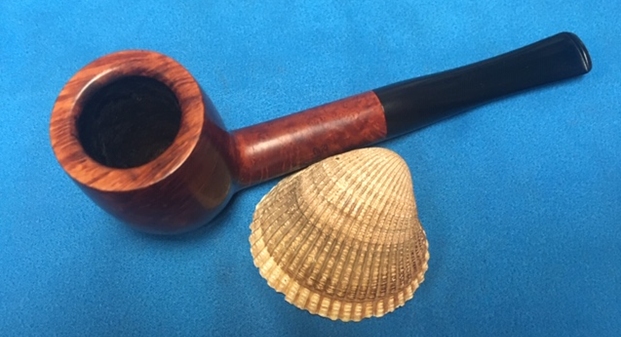 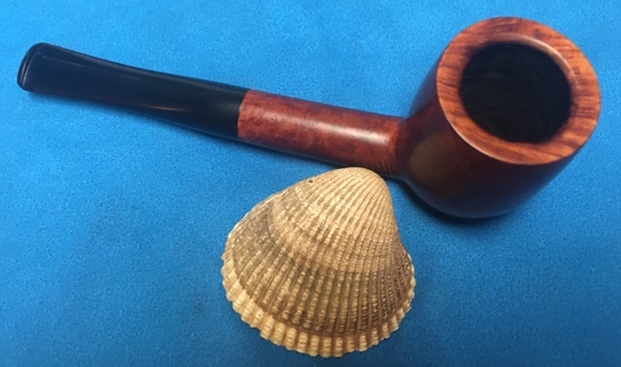 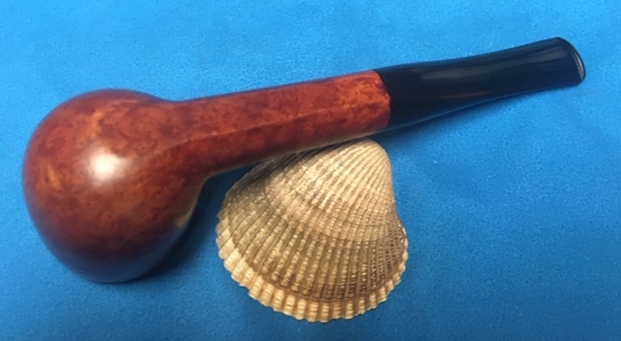 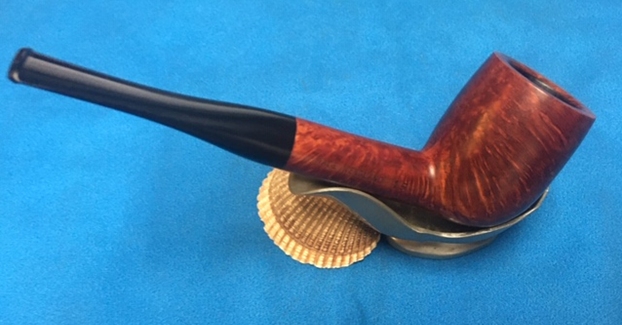 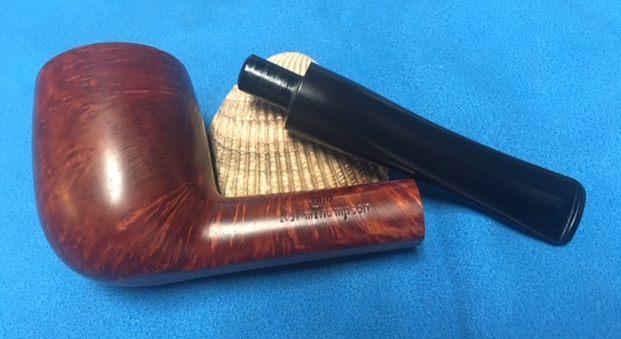