The next pipe on the table came to us from one of Jeff’s pipe hunts or auctions. It is a rusticated Peterson’s “Donegal” Rocky 03 Bent Apple. The rusticated finish is quite nice with at that classic Peterson’s rustication pattern. The pipe was very dirty, with grime and dust deep in the grooves of the rustication. The bowl had a thick cake in the bowl and surprisingly only dust on the rusticated rim top. There was darkening on the briar and a little lava on the inner edge of the rim. The pipe is stamped on a smooth panel on the underside of the shank and reads Peterson’s “Donegal” Rocky with the shape number 03 ahead of that. It is also stamped Made in the Republic of Ireland. On the oxidized Sterling Silver band it is stamped K&P in shields over Sterling Silver there are three hallmarks below and to the left of that. The hallmarks are: 1. a seated woman (Hibernia) – the city stamp for Dublin, 2. Harp – the mark for the quality of the silver, 3. a slanted uppercase N – the date identification of the pipe. The stamping is clear and readable on the pipe. The stem was dirty and oxidized. There were tooth marks and chatter on the stem near the button on both sides and some on the surface of the button as well. There was the Peterson’s “P” on the left side of the taper stem. Jeff took photos of the pipe before he cleaned it up. 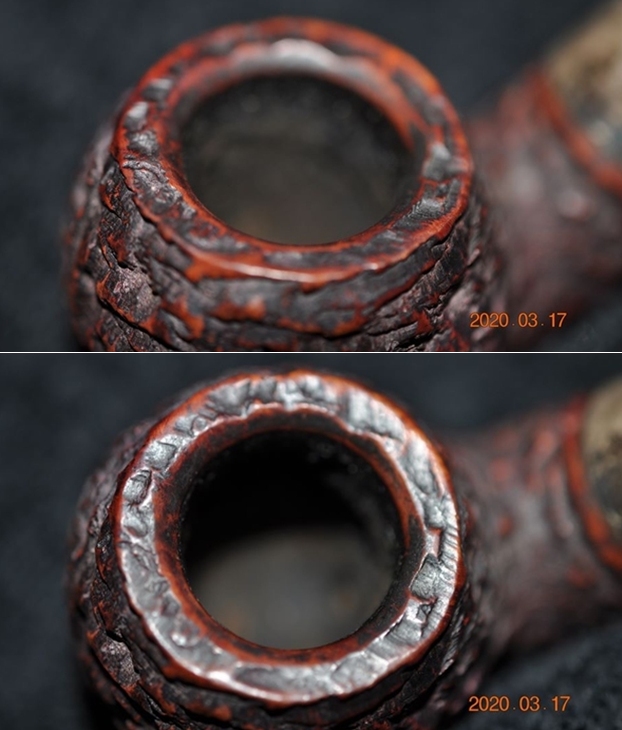 Jeff took some photos of the bowl sides and heel to show the rustication that was on this bowl. It is a quite beautifully crafted pipe. The rustication is quite dirty.

The stem was a very good fit to the shank. It was oxidized, calcified and had debris stuck to the surface of the vulcanite. There was light tooth chatter and marks on both sides of the stem and on the button surface. 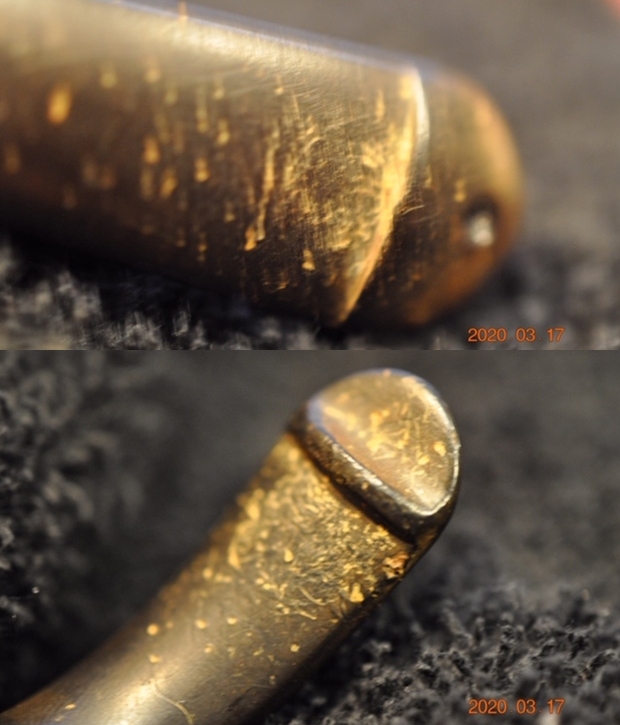 1950 – 1989 The Republic Era  – From 1950 to the present time, the stamp for this era is “Made in the Republic of Ireland” in a block format generally in three lines but two lines have been used with or without Republic being abbreviated.

During the 1950’s and 60’s the Kapp & Peterson company was still in the ownership of the Kapp family. However 1964 saw the retiral of the company Managing Director Frederick Henry(Harry) Kapp.

I turned then to deal with the Hallmarks. I turned to Pipephil’s site for his quick reference charts on the Peterson’s Hallmarks (http://www.pipephil.eu/logos/en/infos/hallmark-dublin.html). I have included the pertinent charts below. The first chart defines the first two hallmarks on the Sterling Silver Band. The Hibernia/Lady is the Dublin Town Mark. The Harp identifies the fineness of the metal.

The second chart pins down the date that this particular pipe was made. The slanted N mark identifies the pipe as being made in 1999. I have drawn a red box around the N on the chart below.

With that information in hand I knew what I was dealing with in terms of the stamping and the age of this pipe. I knew from the information that the pipe was made during the Republic Era between 1950 and 1989. Pipedia then qualifies the dating as follows: From 1950 to the present time, the stamp for this era is “Made in the Republic of Ireland”. I was wondering how a pipe stamped Republic of Ireland and 1999 fit! I guess the “present time” stamp qualifies that.  Now it was time to work on the pipe.

Armed with that information I turned to work on the pipe itself. Jeff had done a great job cleaning up the pipe as usual. He reamed the pipe with a PipNet reamer and cut back the cake back to the bare briar. He cleaned up the walls with a Savinelli Fitsall Pipe Knife. He scrubbed the interior of the bowl and shank with pipe cleaners, cotton swabs and alcohol to remove the tars and oils. He scrubbed the exterior of the pipe with Murphy’s Oil Soap and a tooth brush to remove the grime from the finish. He scrubbed the inside of the stem with alcohol and pipe cleaners. He cleaned the oxidized silver with Soft Scrub and buffed it off with a soft pad. He scrubbed the exterior with Soft Scrub and then soaked it in Before & After Deoxidizer. He washed it off with warm water to remove the deoxidizer. The pipe looked far better. I took photos of the pipe when I received it before I started working on it. 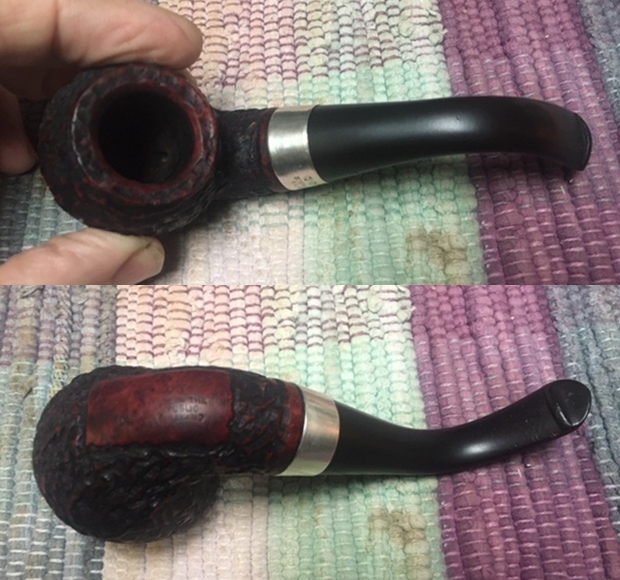 I took photos of the bowl and rim top to show how clean it was. The rim top and edges look very good. The stem looks clean of oxidation and there are light tooth marks and chatter on both sides of the stem.

I took a photo of the pipe with the stem removed to show the overall look of stem, tenon and profile of the pipe. It is a great looking pipe. 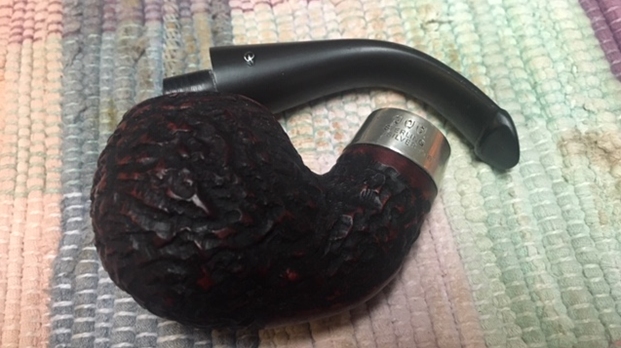 I rubbed the briar down with Before & After Restoration Balm. I worked it into the briar with my fingertips and a horse hair shoe brush to get it into the deep crevices of the rustication. The product works to clean, enliven and preserve the briar. I let it sit for 10 minutes while I worked on the stem. After the time passed I buffed it with a cotton cloth to deepen the shine. The rustication came alive with the balm. 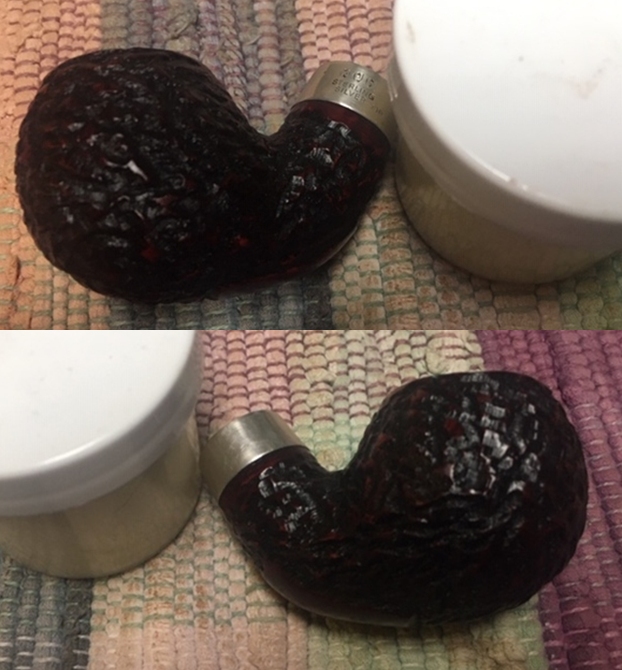 I set the bowl aside and turned my attention to the stem. There were some deep marks on the left side of the stem at the bend. I filled them with clear super glue and set it aside to cure. Once it was cured I sanded the stem to blend the repairs into the rest of the surrounding vulcanite.

I sanded out the tooth marks and chatter on both sides of the button surface and stem with 220 grit sandpaper and began the polishing with 400 grit wet dry sandpaper. 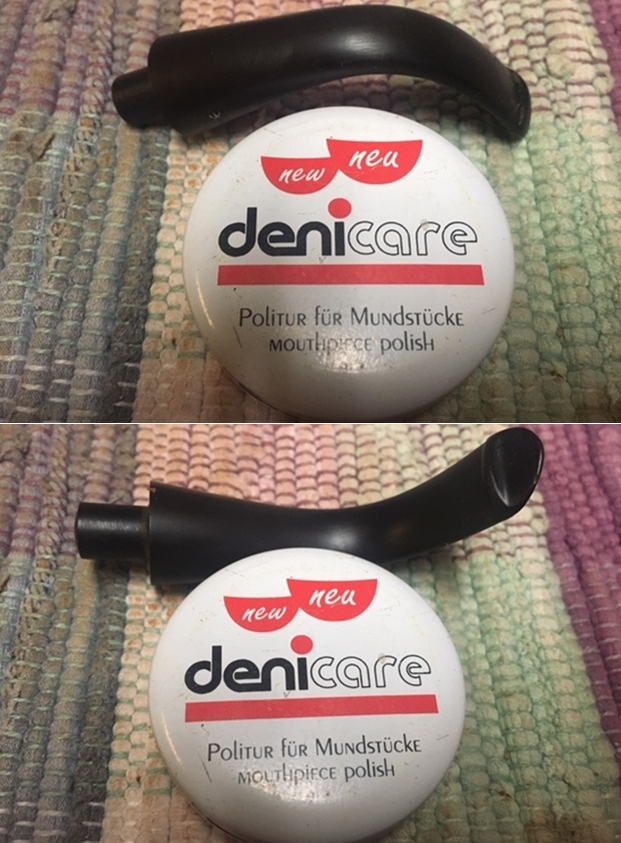 I touched up the P stamp on the left side of the stem with Paper Mate Liquid Paper and once it dried I scraped off the excess. The P stamp definitely looks better at this point. 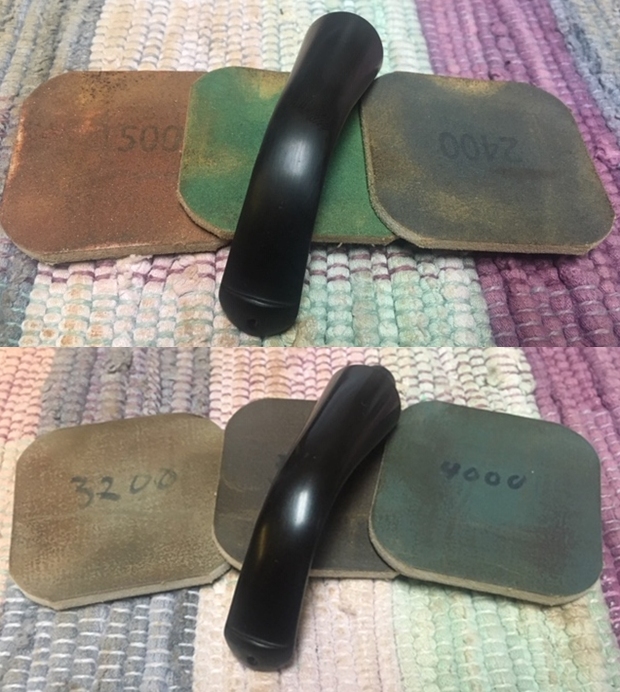 This Republic Era Peterson “Donegal” Rocky 03 Bent Apple is a nice looking pipe. The rustication and mixed stain around the bowl sides and shank really stand out with the polishing. The finish on the pipe is in excellent condition and the contrasting stains work well to give some contrast to the rusticated finish of the pipe. The polished black vulcanite P-lip taper stem adds to the mix. With the grime and debris gone from the finish and the bowl it is really is eye-catching. I put the stem back on the bowl and buffed the pipe with Blue Diamond on the buffing wheel, carefully avoiding the stamping on the shank and using a light touch on the rusticated bowl and shank. I gave the bowl multiple coats of Conservator’s Wax by hand and the stem multiple coats of carnauba wax on the buffing wheel and followed that by buffing it with a clean buffing pad. I hand buffed the pipe with a microfiber cloth to deepen the shine. The finished Bent Apple is quite nice and feels great in the hand. Give the finished pipe a look in the photos below. I can only tell you that like the other pipes I am working that it is much prettier in person than the photos capture. The dimensions of the pipe are Length: 5 inches, Height: 1 ½ inches, Outside diameter of the bowl: 1 ¼ inches, Chamber diameter: ¾ of an inch. Thanks for walking through the restoration with me as I worked over another interesting pipe. This Peterson’s “Donegal” Rocky will be added to the Irish Pipe Makers section of the rebornpipes store soon. If you want to add it to your collection send me an email or a message! Thanks for your time. 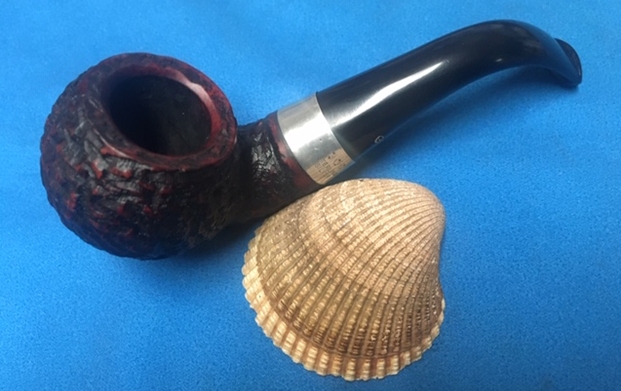 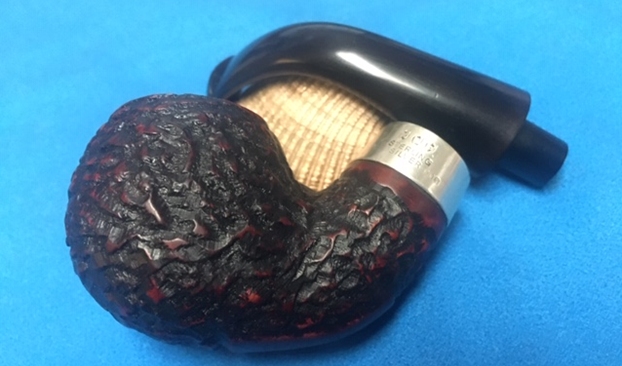 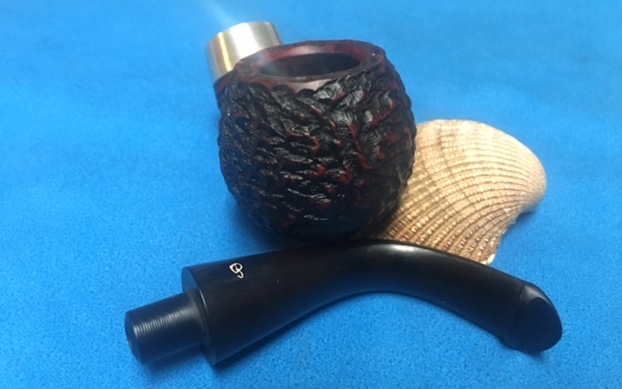