When this pipe arrived it had the look of an older Shalom pipe from Israel. The shape and style of the stem, the type of briar and the shape of bowl all said to me that it was pipe made by The Shalom Pipe Co. Once I looked over the pipe it was confirmed. It was stamped on the underside of the shank ISRAEL. On the side of the shank it reads The Tinderbox in an arch over Noble. So I was working on a Shalom pipe made for Tinderbox. The Shalom Pipe Factory in Israel was owned by Bernard Hochstein, former CEO of Mastercraft. The Alpha line was made exclusively for export to the United States. They were made in Israel from the 1970s into the 1980s. The Shalom Pipe Company made a lot of shop pipes for local pipe shops in the US. This is one of those pipes.

I am not sure where on his travels Jeff found this old tired pipe but it had a unique shape and look that I liked. It showed promise – the grain on the briar was a mix of cross grain, flame grain and birdseye. There was a chip out of the outer edge of the rim on the right side of the bowl and some light rash on the bowl side. The end of the shank was inset for the stem. It gave the pipe a dressy look. The bowl had a thick cake that had formed a hard lava coat on the rim top. The finish on the bowl was very dirty with a lot of oils and grime ground into the briar. The stem had deep oxidation in the vulcanite and there were very deep tooth marks on both sides near the button. Jeff took photos of the pipe before he started his clean up on it. 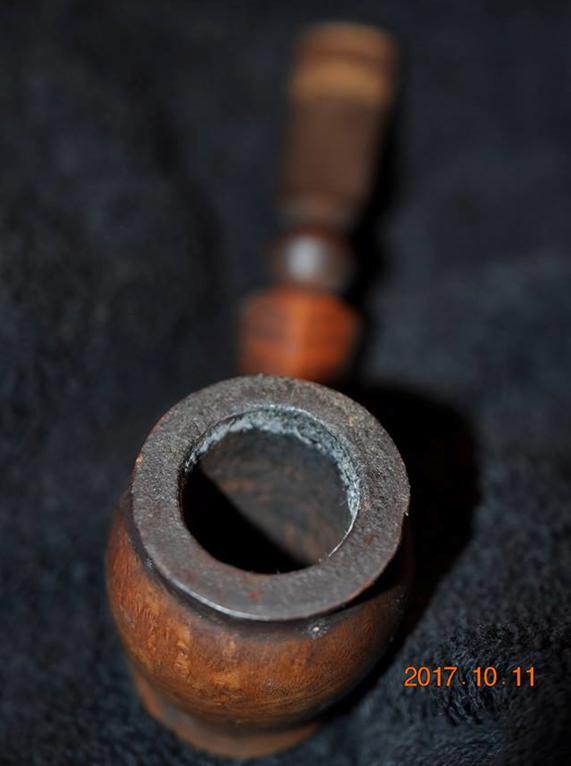 He took a close up photo of the rim top and bowl. You can see the thickness of the cake in the bowl and the heavy lava coat on the top. The bowl exterior was also caked with tars and grime around the groove around the top of the bowl. Jeff also took photos of the sides of the bowl to show the condition of the pipe. The first four photos show the damaged area on the top edge of the right side of the bowl. I have circled the damaged areas in red on the photos to highlight the issue. The fifth photo shows the underside of the bowl. The grain is quite beautiful and shows through the grime on the finish. 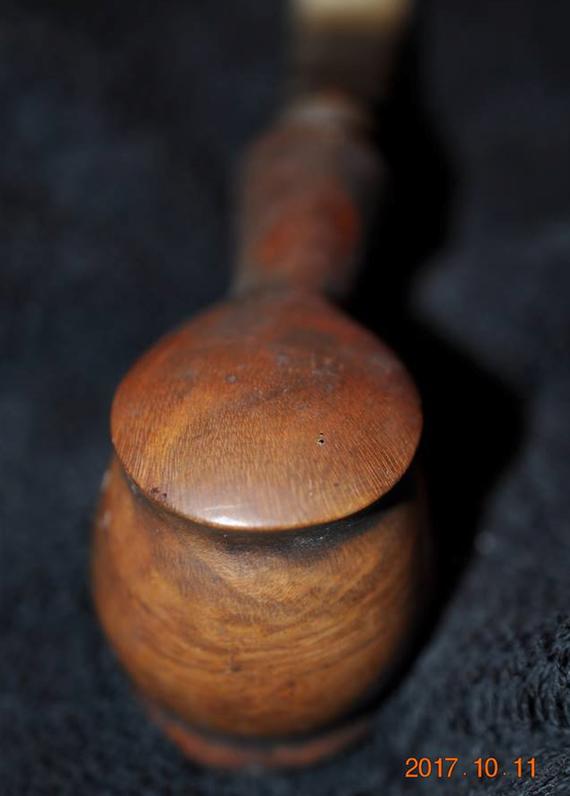 The stem was pitted from the oxidation and it was deep in the surface of the vulcanite. There were visible tooth marks on both the top and underside of the stem as well as on the edges of the button itself. 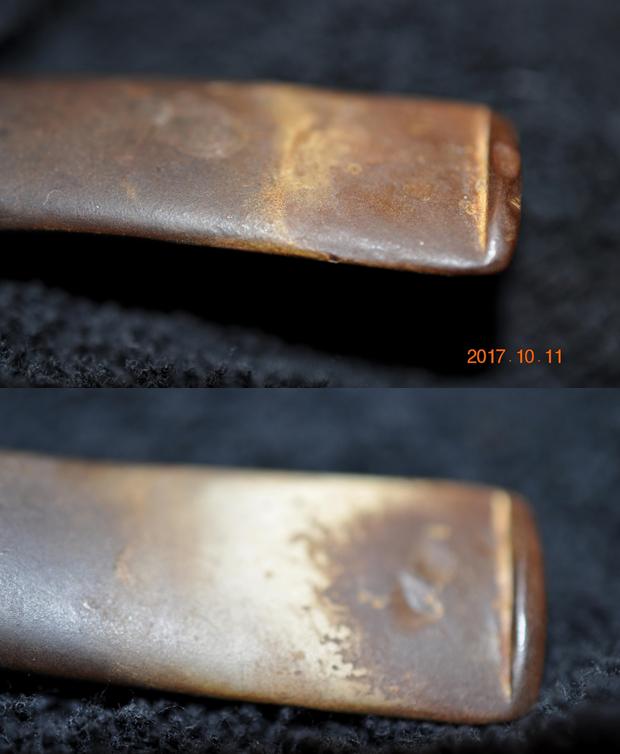 Jeff did his usual thorough clean up on the bowl and stem. He reamed the bowl with a PipNet pipe reamer and cleaned up the last bit of cake with a Savinelli Fitsall reamer. He cleaned the internals with alcohol, pipe cleaners and cotton swabs – Spending extra time scrubbing out the mortise as it was very dirty. He scrubbed the exterior of the pipe with Murphy’s Oil soap and a tooth brush and was able to remove all of the tars and oils built up on the briar. He was able to remove all of the tars and lava on the rim top and leave it looking very clean. He soaked the stem in an Oxyclean bath to raise the oxidation to the surface of the vulcanite.

When it arrived it looked like a different pipe. I was excited to start working on it so I pulled the stem off and put it in a bath of Before & After Pipe Stem Deoxidizer and left it to soak overnight. I totally forgot to take photos before doing this.

I remembered in time to take photos of the bowl before I started working on it. It was very clean and would look amazing once it was finished.

The shank end had been turned and was inset so that the stem could be inset into the shank giving it a unique and trim look.

I filled in the chipped divot on the outer edge of the rim with clear super glue. I layered it into the divot until the edge matched the surrounding areas. I also applied it to the rim top to cover that damaged area. I used the super glue to fill in the road rash on the left side of the bowl below the chipped area. 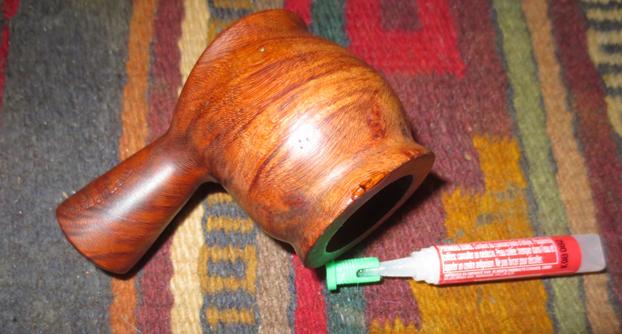 When the repair had dried I sanded the repaired areas with 220 grit sandpaper to blend them into the rest of the bowl. I was able to blend the chipped area into the surface of the bowl so that it was virtually invisible. I sanded the road rash area with 220 grit sandpaper as well and blended it into the bowl side. I sanded it with micromesh sanding pads – wet sanding it with 1500-2400 grit micromesh pads and dry sanding it with 3200-4000 grit pads.

I stained the sanded areas with a dark brown stain pen to match it to the rest of the stain on the briar. I hand buffed it with a soft cloth to raise a shine. 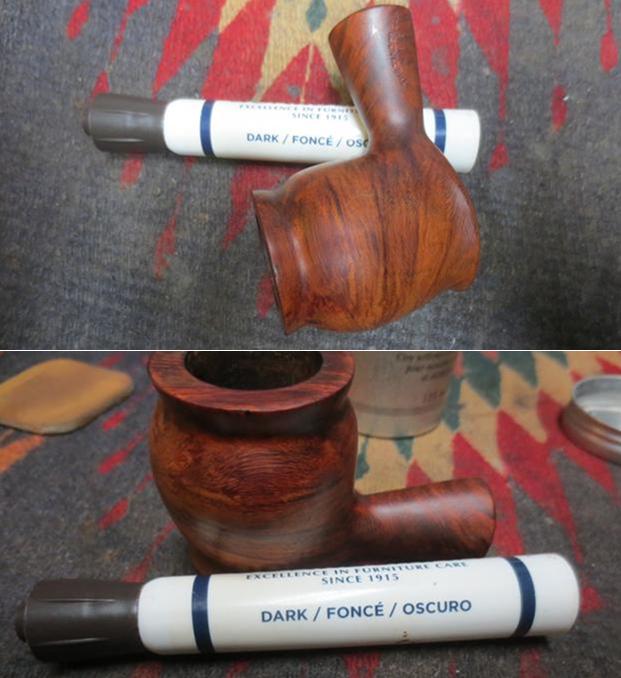 I rubbed the bowl down with Before & After Restoration Balm to deep clean the smooth finish, enliven and protect the briar. I hand rubbed it with my fingers and wiped it off with a soft cloth. I buffed the bowl on the wheel with Blue Diamond to raise the shine. I took some photos of the bowl at this point to mark the progress in the restoration.

In the morning I removed the stem from the deoxidizer and wiped off the excess deoxidizer from the surface of the stem with a paper towel. I cleaned out the airway in the stem with pipe cleaners and alcohol to remove any remnants of the bath from that part of the stem. The photos below show the stem after the soak and rub down. It was still quite oxidized. The oxidation was significantly less than when I started but it was still present. I decided to work on it without further soaking. It would be a stem that I would have to hand work to get rid of all the oxidation. The tooth marks are visible on the top and underside of the stem in the photos.

I sanded the stem with 220 grit sandpaper to remove the oxidation from inside the tooth marks, reshape the button on both sides and wiped down those areas with alcohol to remove the sanding dust. I painted the tooth marks with the flame of a Bic lighter to lift them as much as possible before repairing them. I filled in the tooth divots with black super glue and sprayed them with accelerator to speed the drying time. Once the repairs were dry I sanded them with 220 grit sandpaper to blend them into the surface of the stem. The first two photos below show the repairs after I first sanded them. The third and fourth photos show the stem after I had sanded the repaired areas to match the surface of the stem. 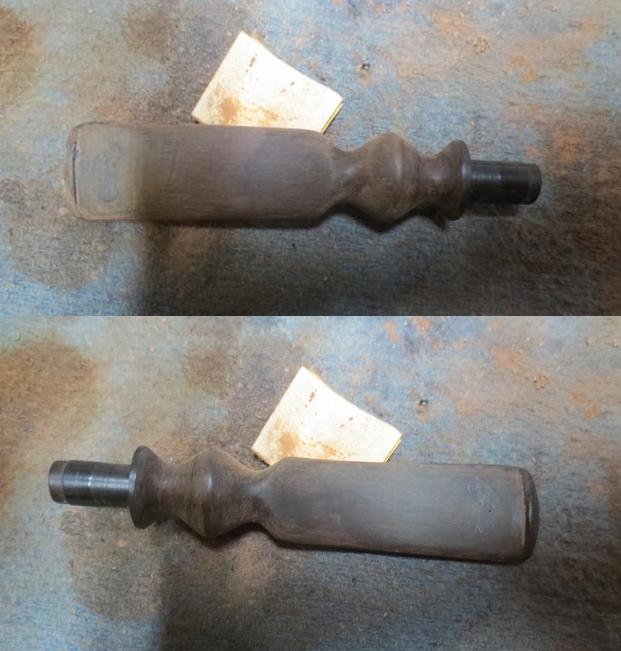 I polished out the sanding scratches and marks in the vulcanite with micromesh sanding pads – wet sanding it with 1500-2400 grit pads and dry sanding it with 3200-4000 grit pads. I wiped the stem down with Obsidian Oil after each sanding pad. I buffed the stem with Blue Diamond on the buffing wheel. I brought it back to the table and sanded it with the final three 6000-12000 grit pads. After the final pad I gave it a final coat of oil and set it aside to dry.

I put the stem back on the bowl and worked the pipe over on the buffing wheel using Blue Diamond to polish the bowl and shank. I buffed the stem to raise the gloss on the vulcanite. I gave the bowl and stem multiple coats of carnauba wax. I buffed the entire pipe with a clean buffing pad to raise the shine. I hand buffed it with a microfiber cloth to deepen the shine. The finished pipe is shown in the photos below. The medium brown stain on the cauldron shaped bowl works well with the rich black of the vulcanite stem. This is a unique, beautiful and well-made pipe. The dimensions of the pipe are: Length: 6 inches, Height: 2 inches, Diameter of the bowl: 1 1/2 inches, Diameter of the chamber: 7/8 inches. I will be adding this one to the rebornpipes store shortly if you are interested in adding it to your collection. It will make a fine addition to the rack. If you are interested email me at slaug@uniserve.com or send me a message on Facebook. Thanks for looking. 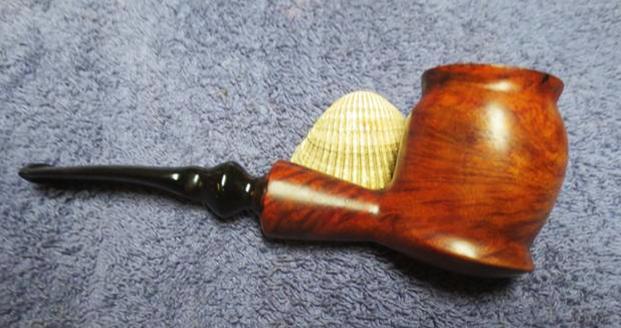 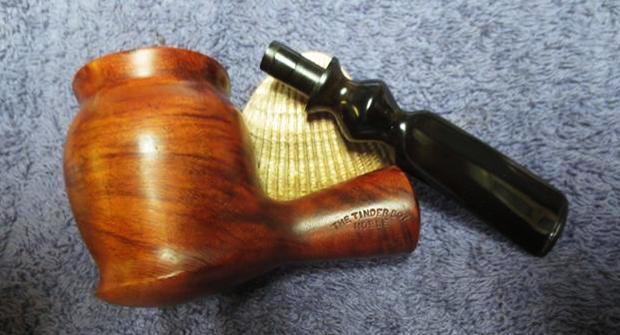 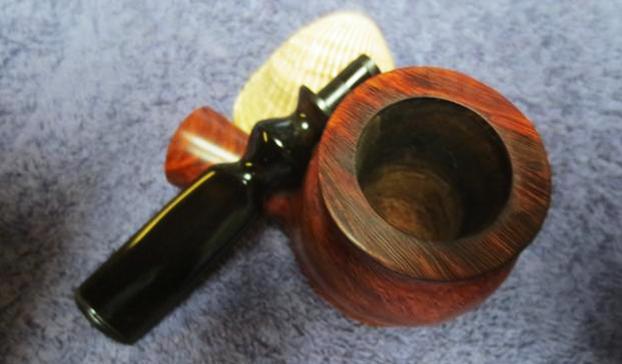 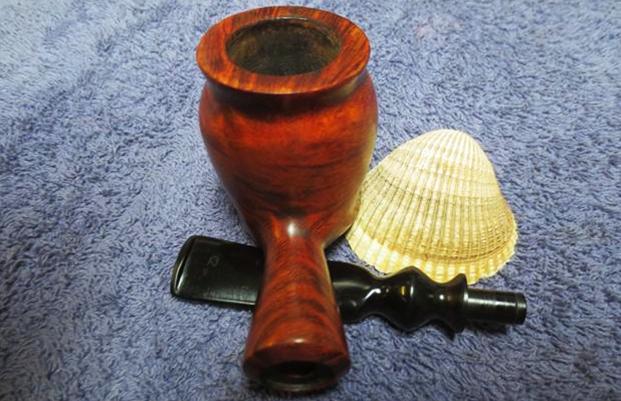