The next pipe on the work table came to us from an online auction Hatboro, Pennsylvania, USA. It is a nice looking long shank billiard in a classic British and Comoy’s shape. The pipe is stamped on the left side of the shank and reads Comoy’s [over]Tradition. On the right side is the shape number 206 near the bowl/shank union followed by the circular COM stamp Made in London [over] England. It is a beautiful mixed grained Comoy’s small billiard that really is a pipe of Pipe Smoking History. The finish had a lot of grime ground into the smooth finish on the bowl and some darkening around the sides of the bowl. The bowl had a heavy cake there was an overflow of thick lava on the top of the rim and on the inner bevel of the bowl. It was hard to know what the rim top and inner edge of the bowl looked like under the grime. The stem was oxidized and there were a lot of tooth marks and chatter on both sides ahead of the button. There was a three part inlaid C on the left of the taper stem. The pipe had promise but it was very dirty. Jeff took photos of the pipe before he started his cleanup work. 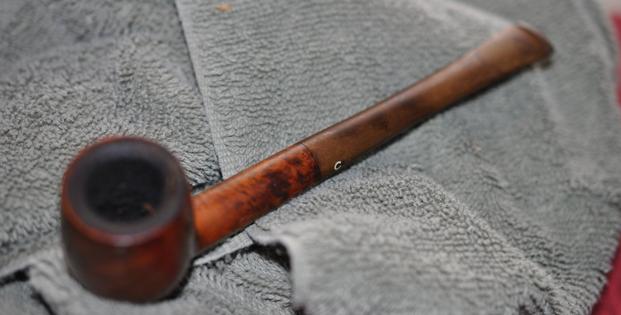 He took photos of the rim top to show the condition of the top and edges of the bowl. It is a heavily smoked pipe with a lot of build up and tar. The lava overflow on the inner bevel of the rim is also quite think. The stem was heavily oxidized and had light tooth marks and chatter on both sides ahead of the button. 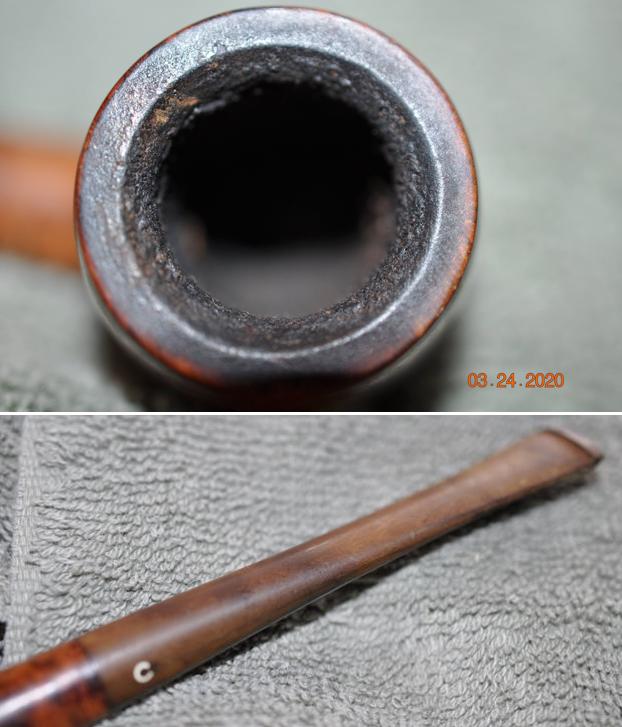 He took photos of the sides and heel of the bowl to show the grain around the bowl and the condition of the pipe. It is going to be a great looking pipe. 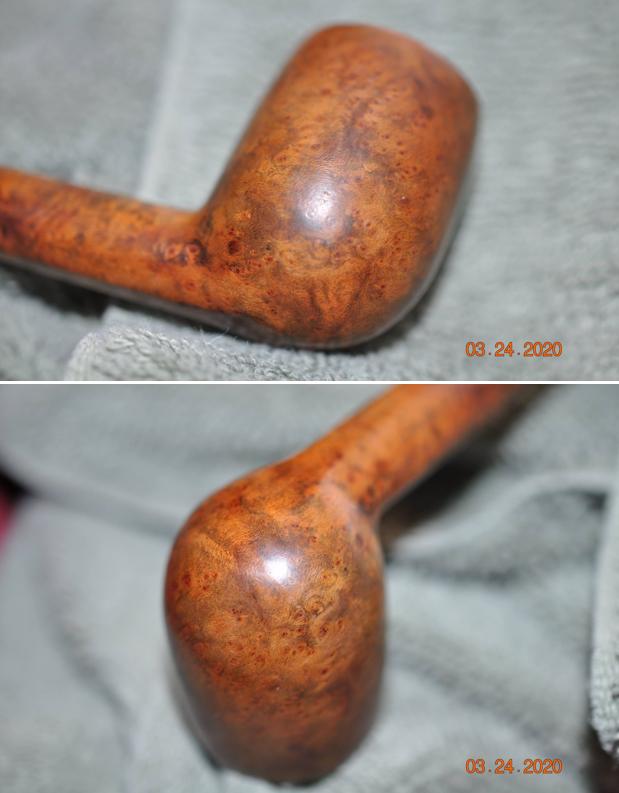 I looked on Pipephil’s site for information on the Comoy’s Tradition and found the following information I have included a screen capture (http://www.pipephil.eu/logos/en/logo-comoy.html). It has the three part C which dated it to 1946 and following. The stamping is the same as the one I am working on.

I turned to the article on Pipedia about dating Comoy’s pipes but the style of the stamping (https://pipedia.org/index.php?title=Comoy%27s_Dating_Guide#1917_to_the_end_of_the_1930.27s_.28at_least_1938.29). I have include the section in the screen capture below that date this pipe to the 1950s. 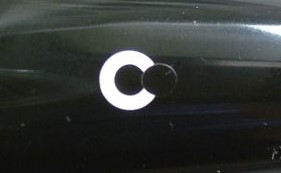 “C” was first inlaid in the side of the mouthpiece around 1919. This was a complex inlay needing three drillings. First, a round white inlay was inserted, then the centre of the white was drilled out, and a smaller round black inlay was inserted. Finally, another drilling was made to remove the open part of the “C,” and an even smaller black inlay was inserted. This inlaid “C,” known as the “three-piece C,” was continued until the Cadogan era in the 1980s. However, the “C” in the 1920s and early 30s is much thinner and more delicate than the one post-WW II.

That article gave me some helpful information regarding the pipe that I was working on. I knew that the stamping and logos identified the pipe as having been made in following WW2 and from what I can see from the above information it is a 1950s era pipe.

Reminded of the above information on the Comoy’s Tradition line it was now time to turn to the pipe itself and do my part of the work. As usual Jeff had done a thorough cleanup on the pipe. He reamed the bowl with a PipNet pipe reamer and followed up with a Savinelli Fitsall pipe knife to remove the cake. He scrubbed out the mortise and the airway in the shank and the stem with alcohol, cotton swabs and pipe cleaners. He scrubbed the exterior of the bowl, rim, shank and stem with a tooth brush and Murphy’s Oil Soap to remove the oils and tars on the rim and the grime on the finish of the bowl. He rinsed it under running water. One of the benefits of this scrub is that it also tends to lift some of the scratches and nicks in the surface of the briar. He dried it off with a soft cloth. He cleaned the internals and externals of the stem with alcohol, pipe cleaners and cotton swabs. He soaked the stem in Briarville’s Pipe Stem Deoxidizer and rinsed it off with warm water and cleaned out the airway in the stem with alcohol. When it arrived here the pipe looked good. 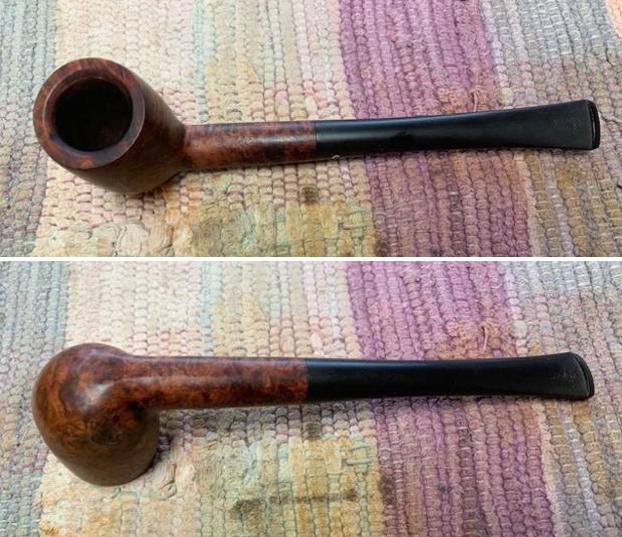 I took a photo of the rim top and stem to show the condition. The rim top and the beveled inner edge of the bowl were in excellent condition. The long vulcanite taper stem looked good and the oxidation was gone. There were light tooth marks and chatter on both sides ahead of the button.

I took photos of the stamping on both sides of the shank. They read as noted above. I also included a photo of the 3 part C logo on the left side of the taper stem.

I removed the stem and took a photo of the pipe to give a sense of the whole. It is a nicely grained and well shaped billiard. Once the stem was off you can see the step down tenon that was on these older Comoy’s pipes.

I polished the bowl and the rim top, sides and shank with micromesh sanding pads – wet sanding with 1500-12000 grit pads and wiping it down after each pad with a damp cloth. I carefully avoided the stamping on the shank so as not to damage the stamping. 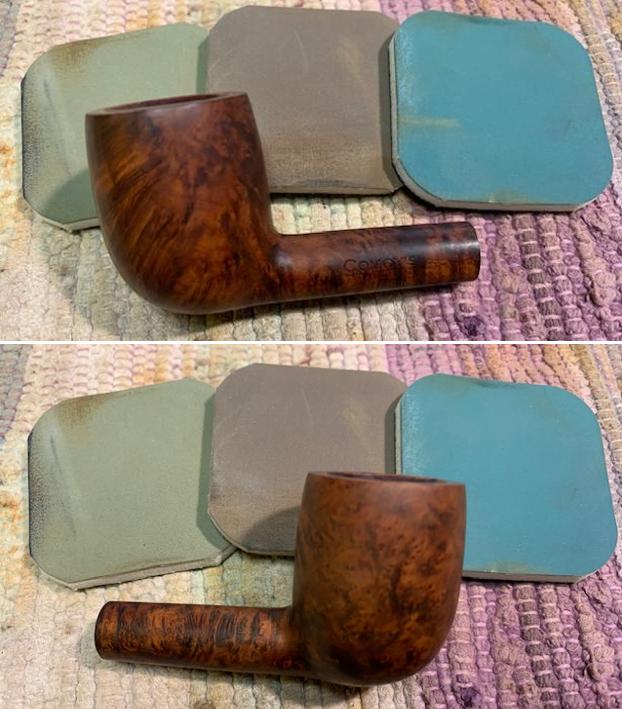 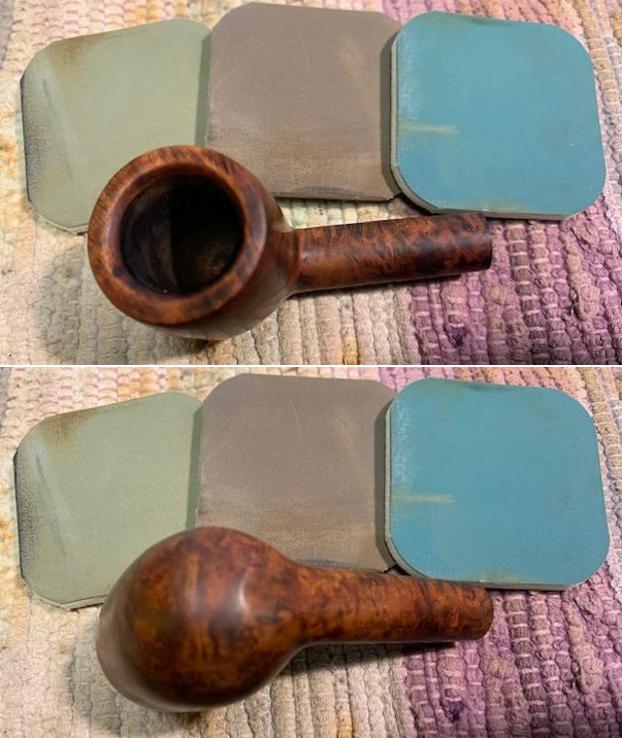 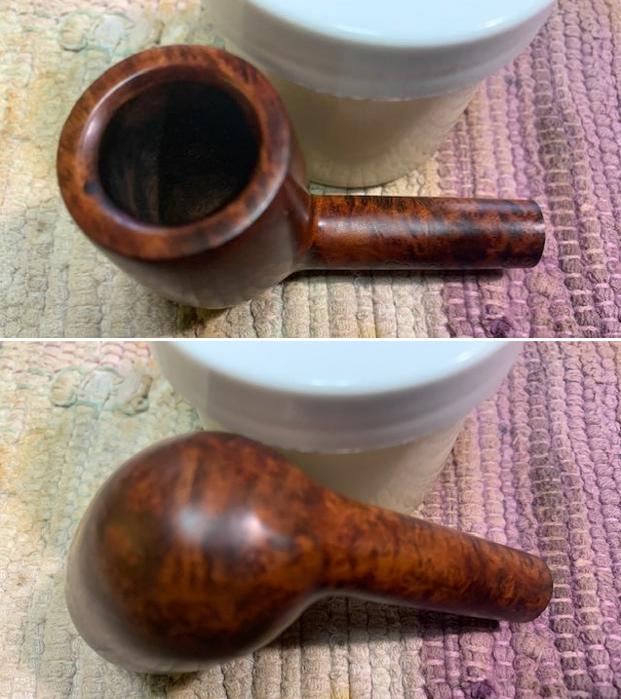 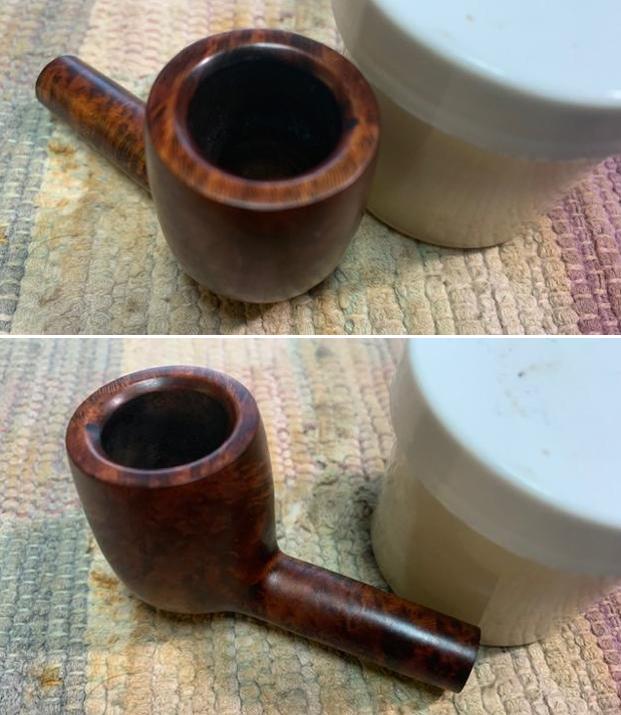 I set aside the bowl and turned my attention to the stem. I sanded the remaining repairs with 220 grit sandpaper to further blend it into the stem surface. I started polishing it with 400 grit wet dry sandpaper. 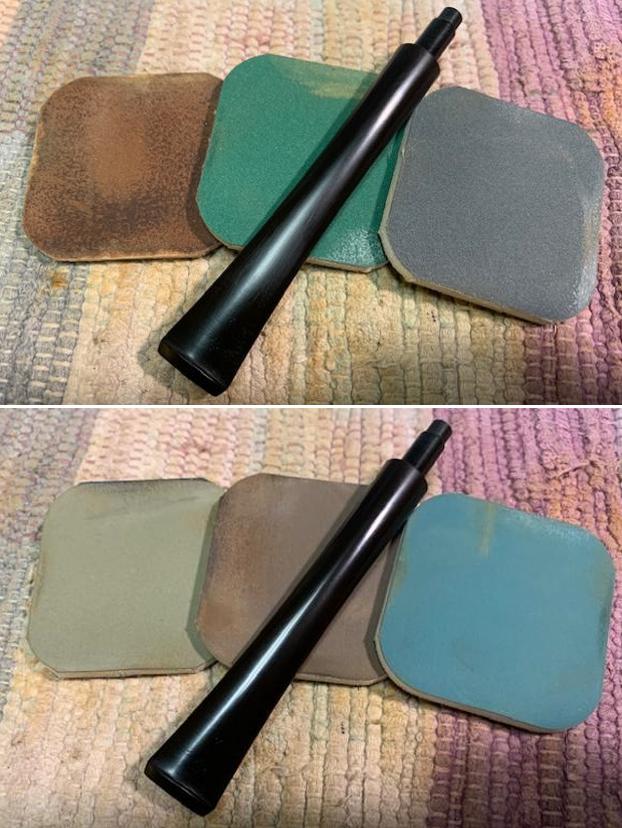 This 50s era Comoy’s Tradition 206 Long Billiard with a vulcanite taper stem is a great looking pipe now that it has been restored. The rich browns and blacks of the contrasting stains came alive with the polishing and waxing. I put the stem back on the bowl and carefully buffed the pipe with Blue Diamond on the buffing wheel using a light touch on the briar. I gave the bowl and the stem multiple coats of carnauba wax on the buffing wheel and followed that by buffing the entire pipe with a clean buffing pad. I hand buffed the pipe with a microfiber cloth to deepen the shine. The finished Comoy’s Tradition Billiard is a beauty and fits nicely in the hand and looks very good. Give the finished pipe a look in the photos below. The dimensions of the pipe are Length: 6 inches, Height: 1 ½ inches, Outside diameter of the bowl: 1 ¼ inches, Chamber diameter: ¾ of an inch. The weight of the pipe is .95oz./27grams. This beauty will be going on the rebornpipes store in the British Pipe Makers section. Let me know if you are interested in adding it to your collection. Thanks for reading this blog and my reflections on the pipe while I worked on it. There are many more to come! 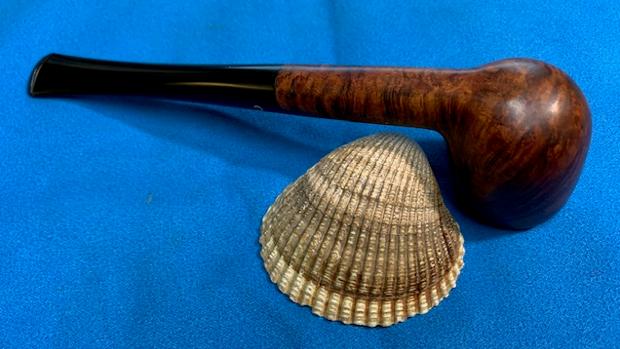 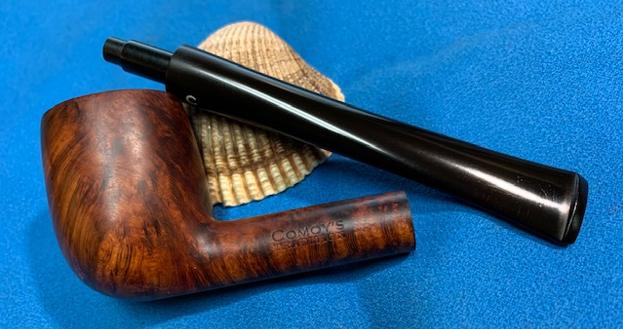 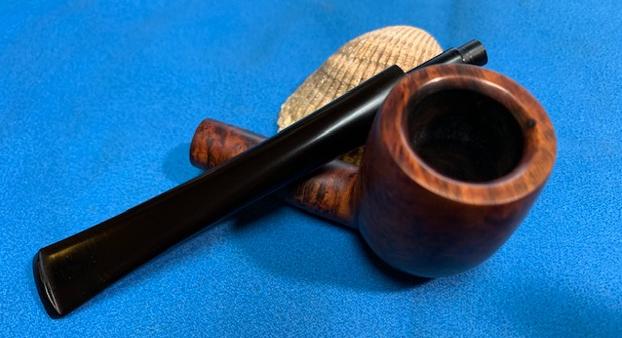 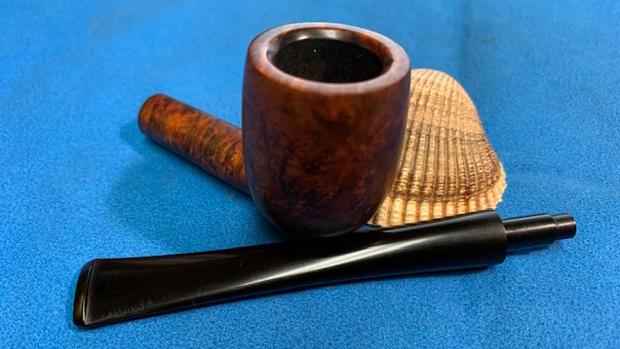