This spectacular pipe came in a lot of freehand pipes that I bought recently. It seemed to me that I needed to restore a Danish freehand pipe in order to earn my pipe-restoring stripes, so-to-speak. The pipe is absolutely beautiful and a superb example of Danish pipe-making craftsmanship. But right at the start, I want to apologize for the dearth of photographs in this post. I guess I was so delighted at the prospect of working on this pipe that I occasionally forgot to capture the moment on camera. 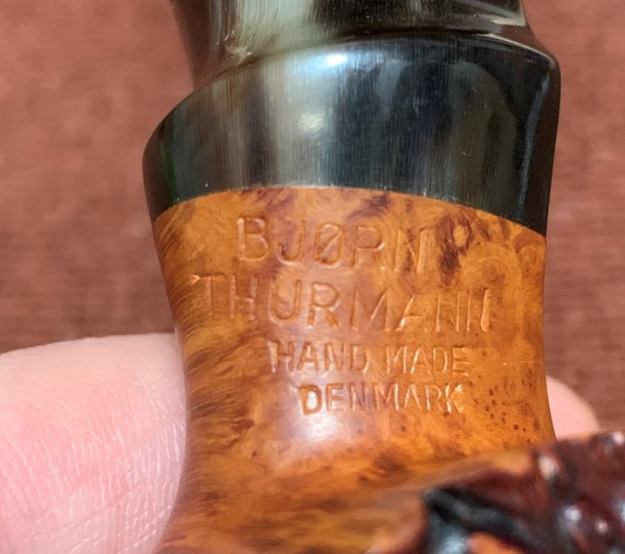 The pipe is a Danish freehand pipe by the esteemed pipemaker, Bjørn Thurmann. The gorgeous briar wood transitions seamlessly into the horn ferrule. It really makes an impression. I am not able to date the pipe, as the photo shows all of the markings to be seen. Thurmann passed away a few years ago, but his company, Thurmann Piber, is still well known in Copenhagen for the fine quality of his work. The reference book, Scandinavian Pipemakers by Jan Andersson, provides us with a nice overview of his background and work. I will quote a bit of it here:

Bjørn Thurmann was born in 1946 – some would say, born into the tobacco trade. In 1953, his parents opened a pipe shop in central Copenhagen and Bjørn helped them there from the beginning, mainly by sorting pipes. Initially, the pipes were bought from a firm called Larsen & Stigart, but eventually they decided to start their own production.

Bjørn’s parents thought that their son ought to widen his views and get some international experience, so, in 1968, he was sent to London to work in different tobacconists shops, a period of learning that ended at Dunhill’s famous shop on Duke Street. After returning home, he almost immediately received an offer to work for Iwan Ries & Co. in Chicago, an offer that was hard to resist, so off he went.

In 1976, Bjørn established himself as an independent pipemaker, and since then he has had shops in several places in Copenhagen. Bjørn has also written a book called Pibemagerens Handbog (The Pipemakers Handbook), which tells how to make pipes using simple tools most people have at home.

Clearly, Thurmann was a vastly experienced and talented pipe man. I am delighted to be able to work on a pipe like this. One can not only see, but also feel, the quality of the briar.

First of all, I am pleased to report that the stummel of this pipe was in good condition. There was some burning around the rim and there was a small nick along one edge of the rim and another small nick on the top of the rim. Otherwise, the wood just needed to be made a bit more spiffy. Meanwhile, the stem needed some attention. It showed signs of oxidation and had been well chewed. 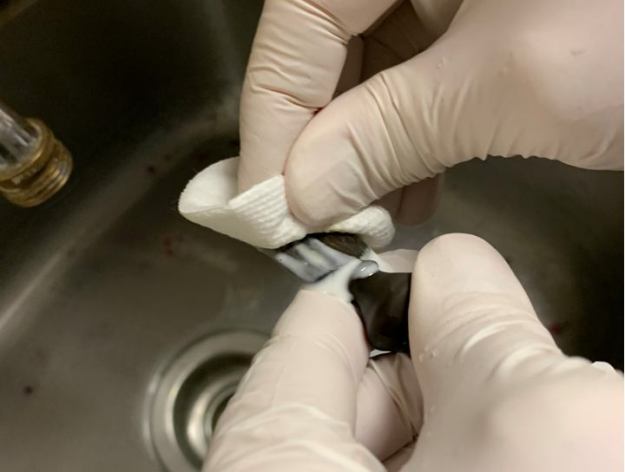 The stem was first on my list. I took a BIC lighter and ‘painted’ the stem with its flame in order to lift the tooth marks. This was only slightly successful in raising the dents. Then, I cleaned out the insides of the stem with pipe cleaners and isopropyl alcohol. Once this process was done, the stem went for an overnight soak in the Before & After Hard Rubber Deoxidizer. The following day, I cleaned all of the de-oxidizing sludge off with alcohol, pipe cleaners, et cetera. The oxidation had migrated to the surface and would be fairly straightforward to remove. I scrubbed vigorously with SoftScrub to remove the leftover oxidation. Before I moved on to the Micromesh pads, I built up both dents and the squashed button on the stem with cyanoacrylate adhesive and let them fully cure. I used my miniature files to do a proper cutting of the new button – this ensures that it keeps its shape and looks like it should. I then sanded it down with 220-, 400-, and 600-grit sandpapers to meld seamlessly into the stem. I did the same to the remaining tooth marks. I then used all nine Micromesh pads (1,500 through 12,000 grit) to bring out the lovely black lustre on the stem. I also used Obsidian Pipe Stem Oil in between each pad scrubbing. 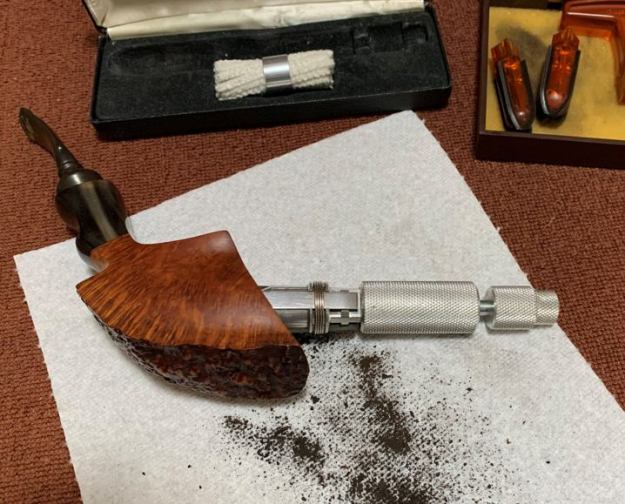 On to the stummel, and the usual cleaning procedures were in order for this pipe. I used both the PipNet Reamer and the KleenReem to remove the built-up cake and take the bowl down to bare briar, as I wanted to ensure there were no hidden flaws in the walls of the bowl. Fortunately, there were none. I then proceeded to clean out the insides of the shank with Q-tips, pipe cleaners, and isopropyl alcohol. There was some nastiness inside this stummel, but fortunately not too much – it only took a handful of pipe cleaners etc. to sort that out. I followed that up by cleaning the insides with some dish soap and tube brushes. I then moved on to cleaning the outside of the stummel with Murphy’s Oil Soap and some cotton pads. That removed any latent dirt.

As I mentioned earlier, there were some small burn marks on the rim of the stummel that also needed to be addressed. A lot of this was removed by the Murphy’s. For the burns that remained, I took some oxalic acid on a Q-tip and rubbed and rubbed. As you will see, the treatment worked very well and the rim is much improved. I completed this part by gently sanding the rim edge to remove the roughness that remained.

Then I addressed the two nicks on the rim – both were relatively straightforward. The first one required a touch of light sanding with the Micromesh pads and then the merest bit of stain with one of my furniture pens. Looks fantastic now. The other nick was solved by filling it with cyanoacrylate adhesive and letting it fully cure. After this, the entire stummel was treated to a rub-down with all nine Micromesh pads (1,500 through 12,000 grit). A light application of Before & After Restoration Balm brought out the best in the stummel’s grain. There is some beautiful wood on this Danish pipe!

Now it was off for a trip to the buffer. A dose of White Diamond and a few coats of carnauba wax were just what this pipe needed. I had to be especially careful with the bench polisher, since the sharp edges had a tendency to catch on the buffing wheels. I have to admit, this did put my heart in my throat a few times!

This pipe was a delight from the start and its beauty only increased through the restoration process. Finally, I am pleased to announce that this pipe is for sale! If you are interested in acquiring it for your collection, please have a look in the ‘Danish’ pipe section of the store here on Steve’s website. You can also email me directly at kenneth@knightsofthepipe.com. The approximate dimensions of the pipe are as follows: length 180 mm; height 55 mm; bowl diameter 55 × 39 mm; chamber diameter 25 × 21 mm. The mass of the pipe is 77 grams. Thank you very much for reading and, as always, I welcome and encourage your comments. 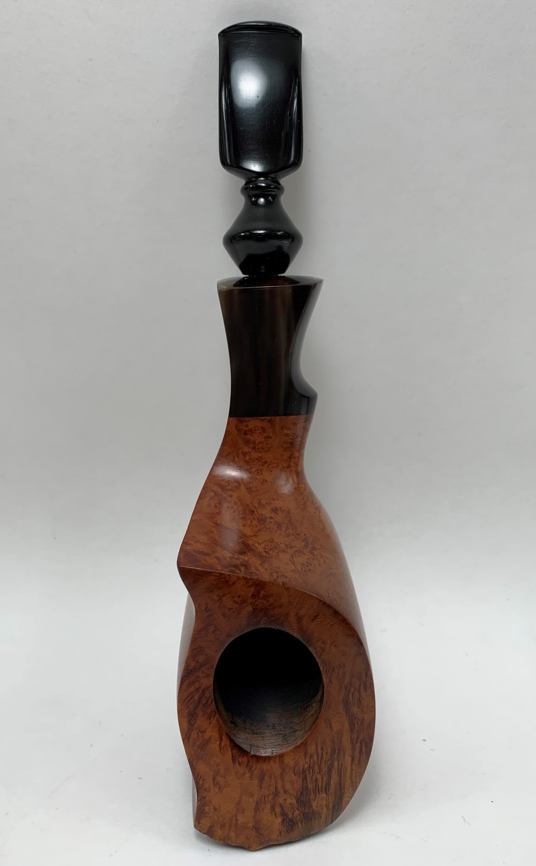 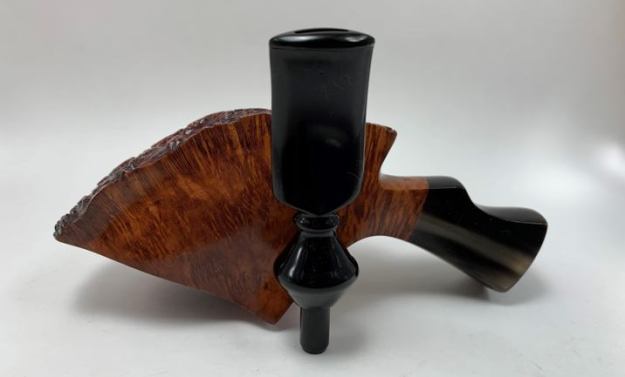