The next pipe on the table came to me from a reader of the blog in Eastern Canada. He contacted me about repairing his first pipe and in the meantime picked up a rack and the fellow he bought it from threw in this pipe as well. It is a very nice looking sandblast Billiard with great grain showing through the deep blast finish. The finish is quite nice with a classic English look to the pipe. The bowl had a light cake lining the walls though the rim top was clean and undamaged. The bottom of the bowl was still raw briar showing that it had not been smoked much. The exterior of the pipe was dusty but otherwise clean. The pipe is stamped on the underside of the shank and reads Birkdale [over] Custom. That was followed by rugby ball shape Made in England COM stamp that is normal on Comoy’s Made pipes. The stamping is clear and readable on the pipe. The stem was dirty, calcified and lightly oxidized. There were light tooth marks and chatter on the stem near the button on both sides and some on the surface of the button as well. There was a hole in the left side of the taper stem where a spot/dot had originally been found. I took photos of the pipe before I worked on it. 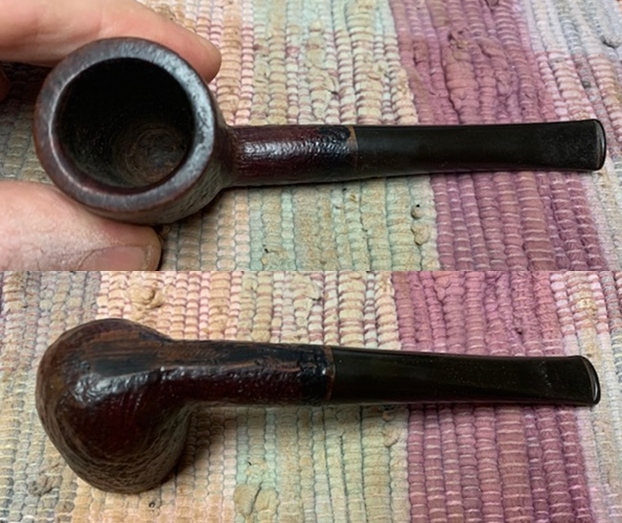 I took photos of the rim top to show the light cake in the bowl and the relatively clean rim top. There was some wear on the finish on the shank end that would need to be worked on. The stem was in relatively good condition with light tooth chatter and marks on the top and underside near the button. The oxidation was minimal as it is very high quality vulcanite. 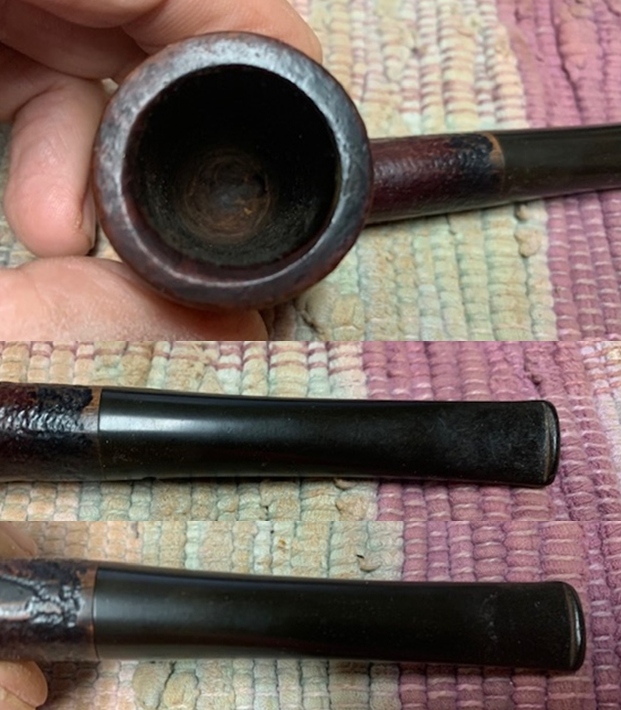 The stamping on the underside of the shank read as noted above. The photo shows that they are quite readable.

I took a photo of the pipe with the stem removed to show the overall look of stem, tenon and profile of the pipe. It is a great looking pipe. You can also see the missing dot on the left side.

I turned first to Pipephil’s site as it is always a quick source of information on any brand (http://www.pipephil.eu/logos/en/logo-comoy.html). I looked for the Birkdale brand and could not find anything. On a hunch about the COM stamp I turned to the section on Comoy’s as noted in the link above. In that section I found what I was looking for. I quote:

Made in London (in oval) England. Note the rugby ball shape of the “Made in London” stamping which is usually in a circle from 1950.

That helped me know that the maker of this pipe was probably Comoy’s and the Made in London Rugby shaped stamp made me assume that the pipe was made prior to 1950.

I turned to a previous blog that I wrote https://rebornpipes.com/2013/10/12/refurbed-birkdale-canadian-made-in-london-england-shape-296/

I have not heard of the Birkdale brand so I Googled it on the net to see what I could find out about it. There was not much there in terms of solid information. There were numerous posts on various forums requesting information. The information on the brand showed some confusion. From Pipedia Birkdale is a brand of the German pipe company named Wolsdorff. In turn Pipephil pegs Wolsdorff as a chain of tobacconists that had their pipes made by different German companies like Design Berlin and Oldenkott. However, the one I found has the made in London England stamping that removes the German connection. Something about the shape and shape number made me do a search in the Comoy’s shape and number charts available online. I found that the 296 shape for Comoy’s is an oval shanked Canadian, exactly like this one. Thus it appears that the pipe was made by Comoy’s. I am wondering if the Birkdale (which is a region in England) is not one of a line of English regionally named pipes made by Comoy’s.

Thus the Birkdale that I worked on and restored in 2013 also lead me to conclude that that earlier pipe was made by Comoy’s in much the same manner I have concluded with this one. The difference is that this one does not have a shape number. If you are reading this and can shed some light on the brand please leave a message in the comments.

Now it was time to work on the pipe. I started my work on it by reaming the bowl. I reamed it with a Savinelli Fitsall Pipe Knife and then sanded the inside of the bowl with 220 grit sandpaper wrapped around a piece of dowel. 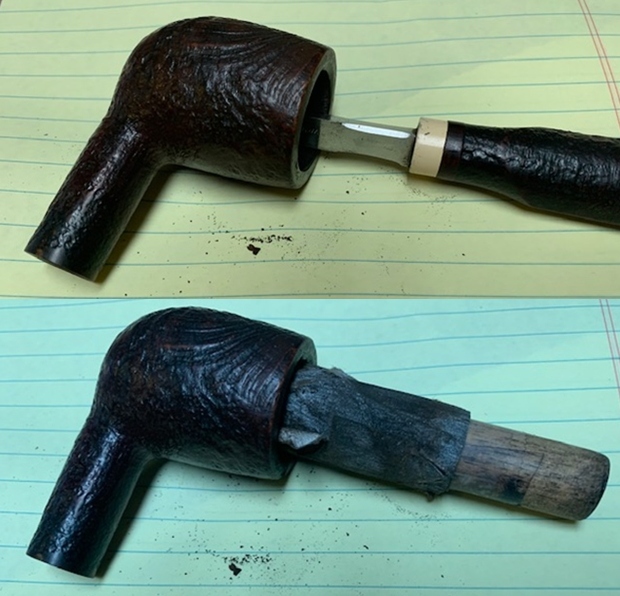 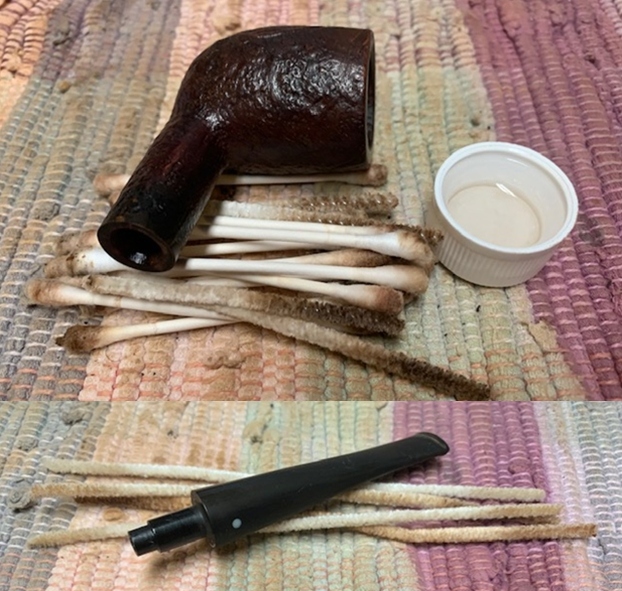 I touched up the stain on the pipe to match the previous colours – I used a Walnut and a Mahogany Stain Pen to blend the colours. The finished bowl looked very good. 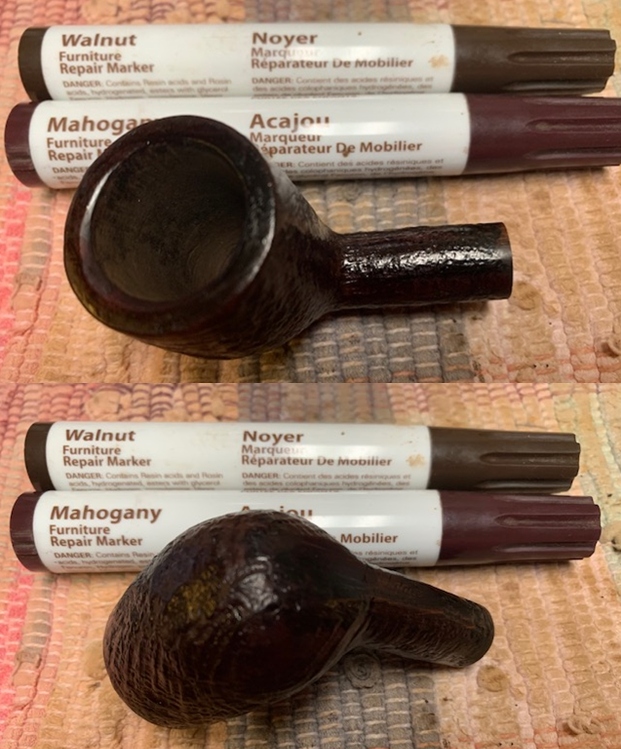 I rubbed the briar down with Before & After Restoration Balm. I worked it into the briar with my fingertips. The product works to clean, enliven and preserve the briar. I let it sit for 10 minutes while I worked on the stem. After the time passed I buffed it with a cotton cloth to deepen the shine. The grain came alive with the balm. 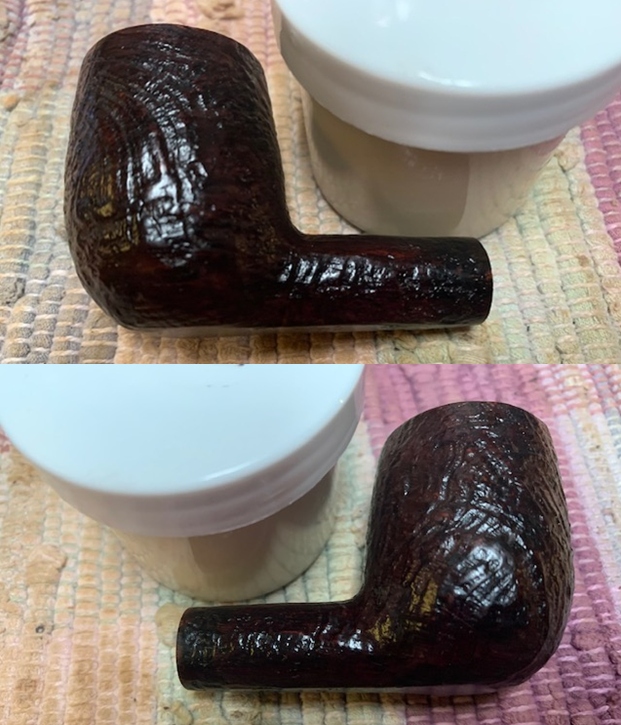 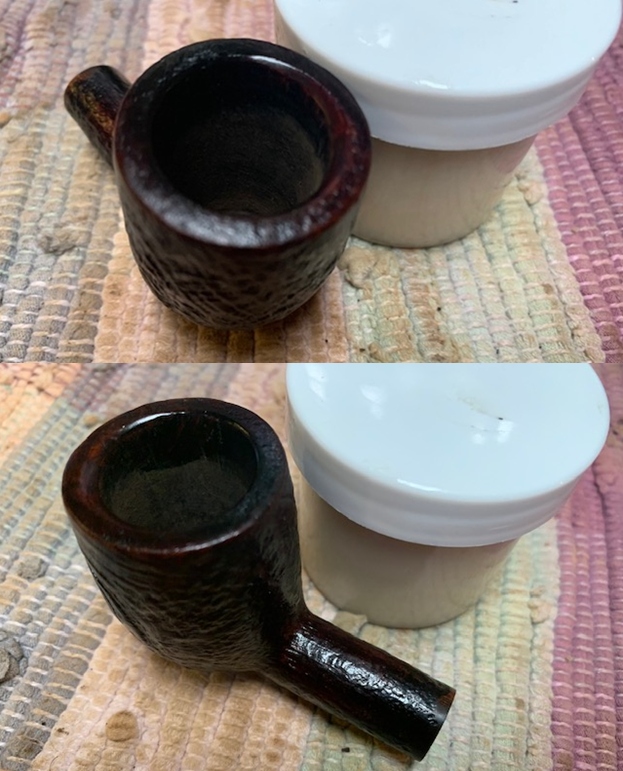 I decided to address the missing dot on the left side of the stem first. I used a piece of acrylic knitting needle to make the  dot. I used a Dremel and sanding drum to strip down the excess material on the needle end. I used a file to take off the last bit of material so that the peg fit in the hole. I clipped off the piece from the needle with a pair of pliers.

I put a drop of clear superglue in the hole and pressed the peg into the hole. Once the glue set I used the Dremel and sanding drum to take down the excess material to the approximate height of the stem. I sanded the rest of the excess off with 220 grit sandpaper to blend it into the surface of the stem.

I sanded the stem with 220 grit sandpaper to further blend dot into the stem surface and remove the tooth chatter and marks near the button. I started polishing the stem with 400 grit wet dry sandpaper. 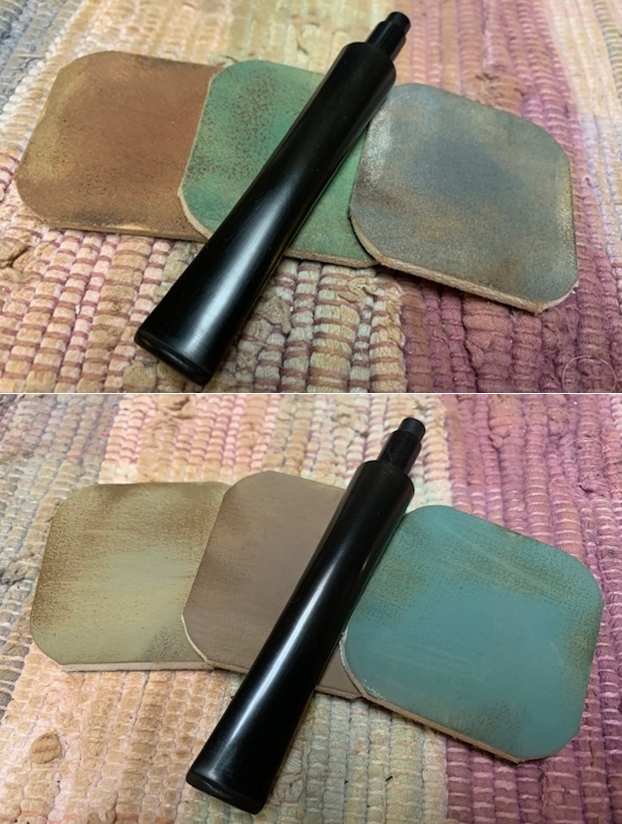 This Birkdale Custom Sandblast Billiard is a great looking pipe. The sandblast finish and contrasting black and oxblood stains around the bowl sides and shank make the grain just pop. The finish on the pipe is in excellent condition and the contrasting stains work well to give some contrast to the polished black vulcanite taper stem. The light blue/ivory coloured dot on left side of the stem worked very well and looked very good. The pipe is really quite eye-catching. I put the stem back on the bowl and buffed the pipe with Blue Diamond on the buffing wheel, carefully avoiding the stamping on the shank. I gave the bowl and the stem multiple coats of carnauba wax on the buffing wheel and followed that by buffing it with a clean buffing pad. I hand buffed the pipe with a microfiber cloth to deepen the shine. The finished Birkdale Custom Billiard is quite nice and feels great in the hand. Give the finished pipe a look in the photos below. I can only tell you that like the other pipes I am working that it is much prettier in person than the photos capture. The dimensions of the pipe are Length: 5 ½ inches, Height: 2 inches, Outside diameter of the bowl: 1 ¼ inches, Chamber diameter: 7/8 of an inch. Thanks for walking through the restoration with me as I worked over another interesting pipe. This Birkdale is almost certainly made by Comoy’s and will be heading back to the fellow in Eastern Canada once I finish his other pipe. I am looking forward to what he thinks of this beauty. Thanks for your time. 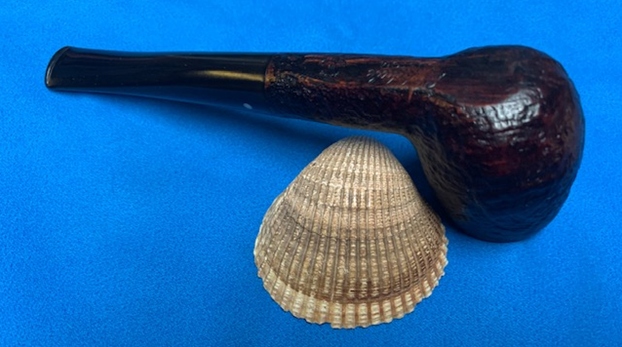 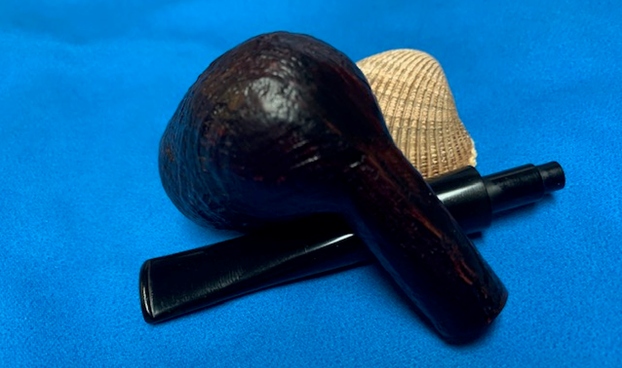 1 thought on “Breathing Life into a Birkdale Custom Sandblast Billiard”