The next pipe on the work table came to me from one of our estate purchases. We picked up two GBD pipes from this seller that needed restoration. This first one is a nicely grained Lumberman shaped pipe with a vulcanite saddle stem. It has been here since the Spring of 2017. The pipe is a bit of a mystery in terms of the additional stamping but not the maker. It is stamped on the top side and reads GBD in an oval with London Made arched around the underside of the oval. On the underside it is stamped with stampings that I have not seen before on a GBD pipe. It reads Ed’s [over] Golden Era [over] London England [over] shape number 256. Next to the stem/shank junction it is stamped with the number 90. The combination of numbers and names is new to me. I am wondering if the pipe was not made by GBD for a pipe shop “Ed’s” and given the name Golden Era. I wonder if the second number 90 is the number of pipes made for the shop. I may never know! The finish had a lot of grime ground into the smooth finish on the bowl and some darkening around the sides of the bowl. The bowl was heavily caked and had an overflow of thick lava on the top of the rim. It was hard to know what the rim top and inner edge of the bowl looked like under the grime. The stem was calcified, oxidized and had tooth chatter and marks on the top and underside and on the surface of the button. There was a faint GBD stamp on the topside of the saddle stem. The pipe had promise but it was very dirty. Jeff took photos of the pipe before he started his cleanup work. 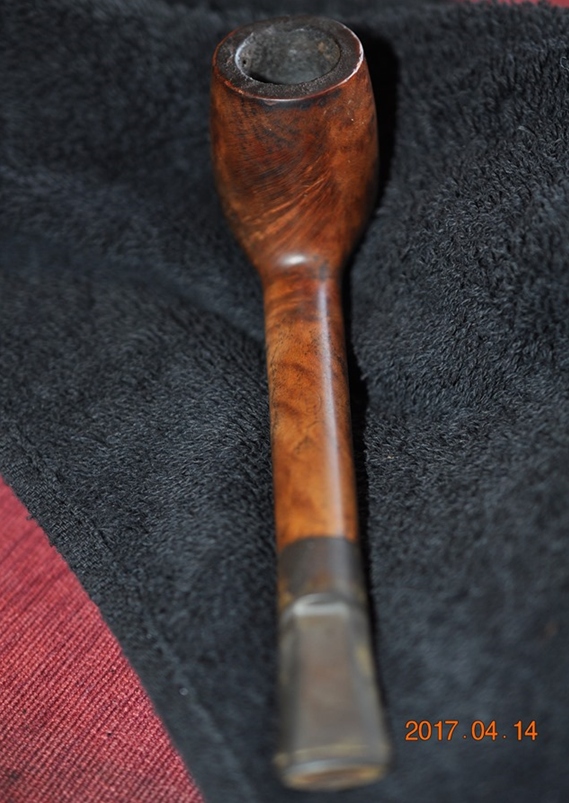 He took photos of the rim top and bowl to give a clear picture of the thickness of the cake and the overflow of lava on the rim top. It appears that there is also some damage to the front inner edge of the bowl in the next two photos. He also took photos of the top and underside of the stem to show the oxidation, calcification, chatter and tooth marks. 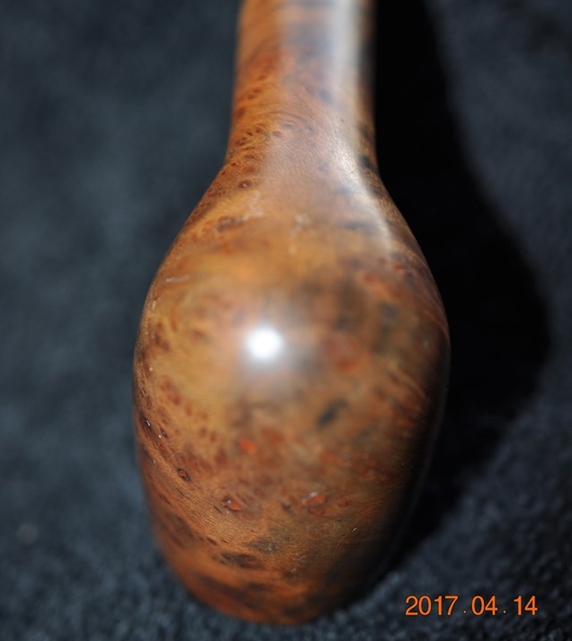 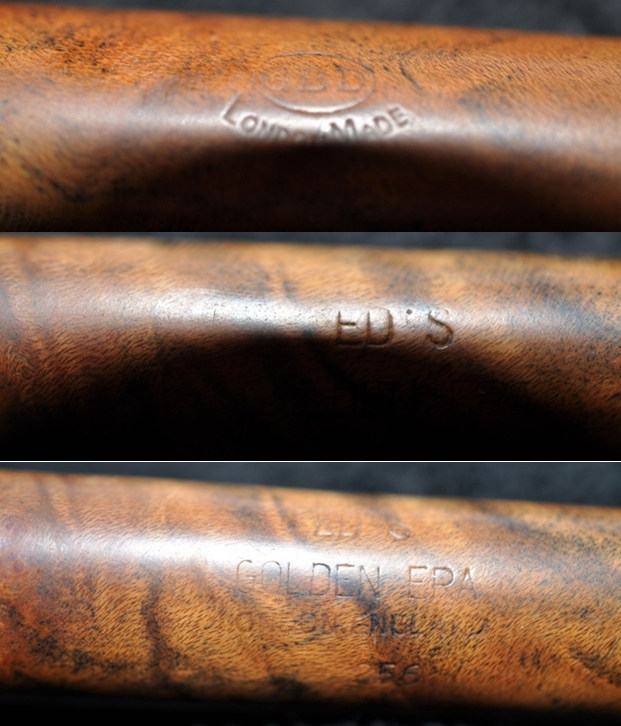 I looked on Pipephil’s site for information on the particular Golden Era Line and found nothing listed. I also went to the the GBD article on Pipedia and found nothing in the great historical article that was pertinent. I did follow a link to the GBD Model Information article to see if there was some help there (https://pipedia.org/wiki/GBD_Model_Information). It dawned on me then to look not at the Golden Era name but at the stamp on the top of the shank – London Made. With that flash or “insight” I found something helpful. I include it below.

London Made — Factory unknown: Some might not be marked with GBD logo and some with additional “house” stampings. Introduced in 1978(?) plain wax finished branded pipes” available in at least six stains. -catalog (1981).

That article gave me some helpful information. I knew that the pipe line was often marked with additional “house” stamping. So my initial think in the introduction were correct. The pipe was made for Ed’s and the shop gave it the Golden Era name. I also knew that the 256 shape number tied back to a Canadian. Since Lumberman pipe were in essence Canadians with a saddle stem I was in the right ballpark. Still no idea what the 80 stamp referred to. Since the pipe was introduced in 1978 could it be the year stamp? Ah well, I am not sure I will know. Now to work on the pipe.

Since Jeff follows the same pattern of work in his cleanup we do not include photos but rather just a simple summary. Jeff reamed the bowl with a PipNet pipe reamer and followed up with a Savinelli Fitsall pipe knife to remove the cake. He scrubbed out the mortise and the airway in the shank and the stem with alcohol, cotton swabs and pipe cleaners. He scrubbed the exterior of the bowl, rim, shank and stem with a tooth brush and Murphy’s Oil Soap to remove the oils and tars on the rim and the grime on the finish of the bowl. He rinsed it under running water. He dried it off with a soft cloth. He was able to remove the lava build up on the rim top and you could see the damages to the top and edges of the rim. I think this pipe may well been before we worked with Mark Hoover’s Before & After Deoxidizer so he cleaned the internals and externals. The stem was clean but oxidized. I took photos of what the pipe looked like when I brought to my worktable. 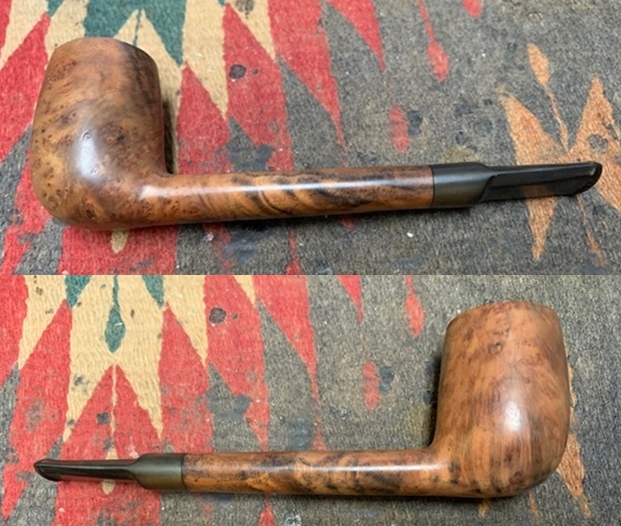 The rim top cleaned up really well with the lava coat removed. The inner edge of the rim showed some damage and burning on the front and back edges. There was also some damage on the rim top at the front.. The stem surface looked very good with some light oxidation remaining and a few tooth marks and chatter on both sides near the button and on the button surface itself. 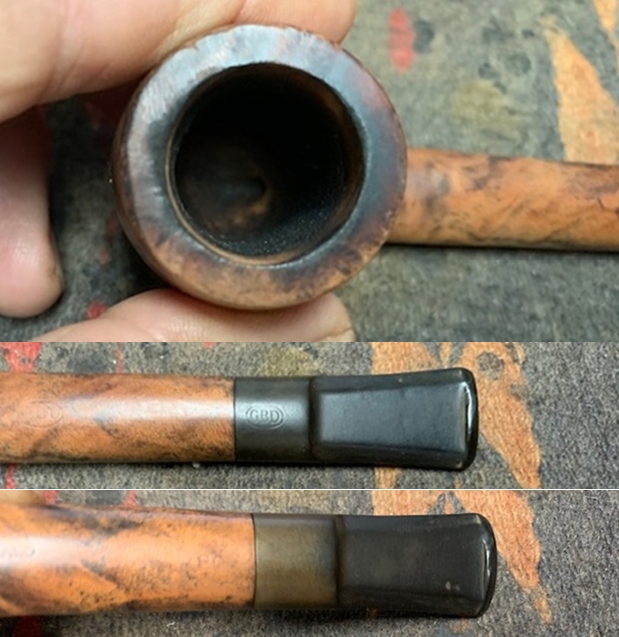 I removed the stem and took a photo of the pipe to give a sense of the whole. It is a well shaped tall apple shaped pipe. 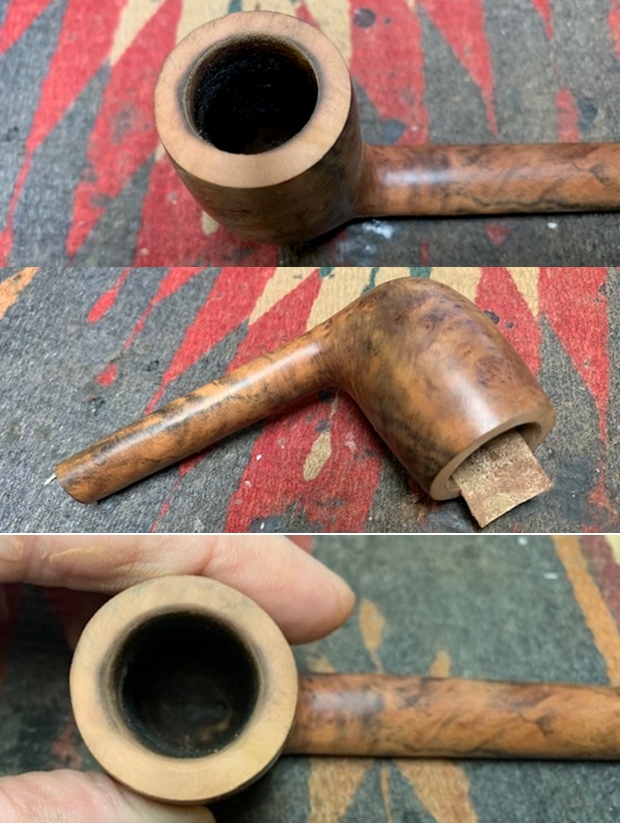 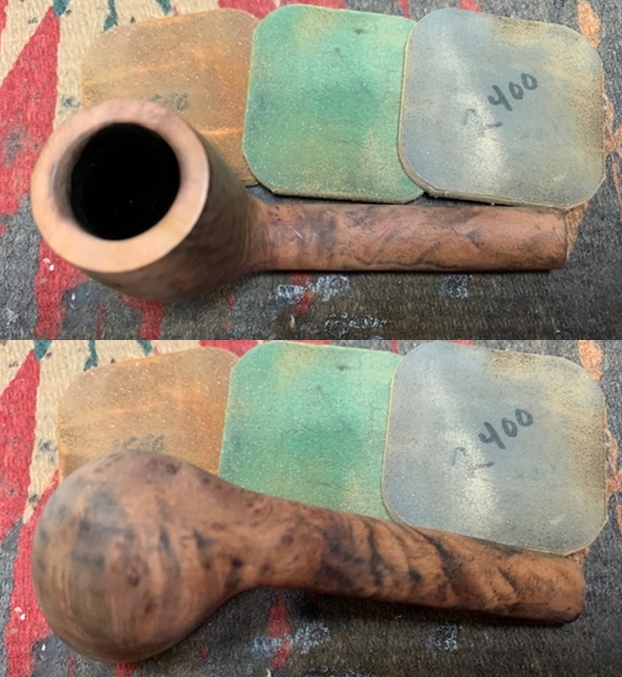 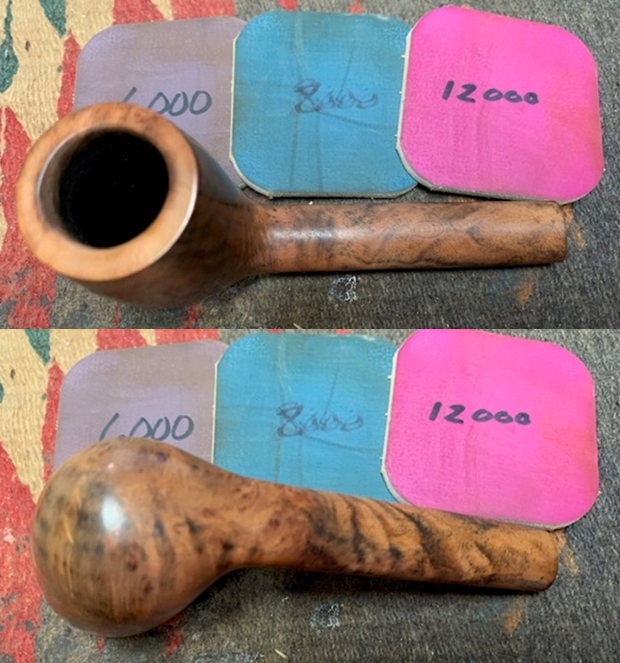 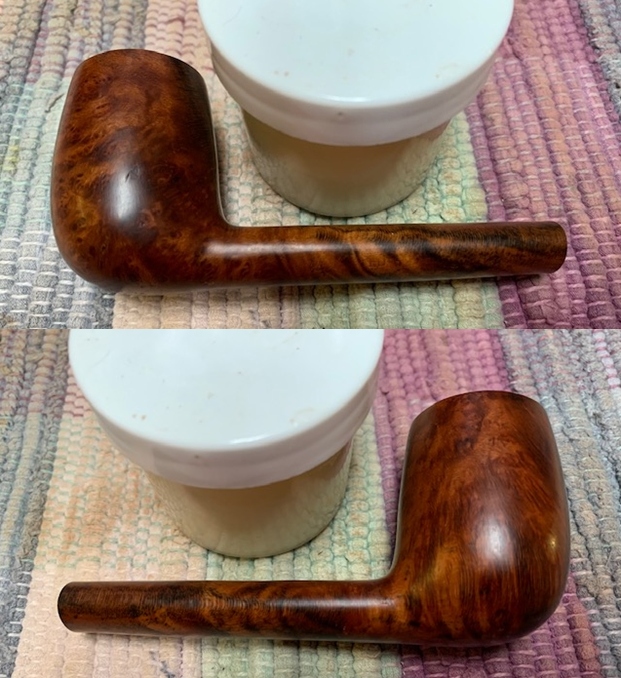 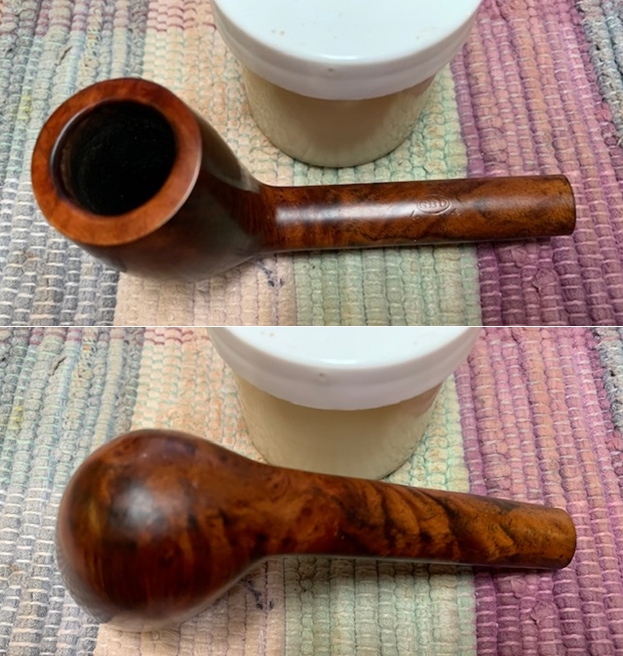 I set the bowl aside and turned my attention to the stem. I wiped off the stem surface with alcohol on a cotton pad and filled in the dents and built up the edge of the button on both sides with black Loctite 380 CA. I set the stem aside to let the repairs cure.

Once the repairs cured I recut the button edge and flattened out the repaired areas with a needle file to begin to blend them into the surface. 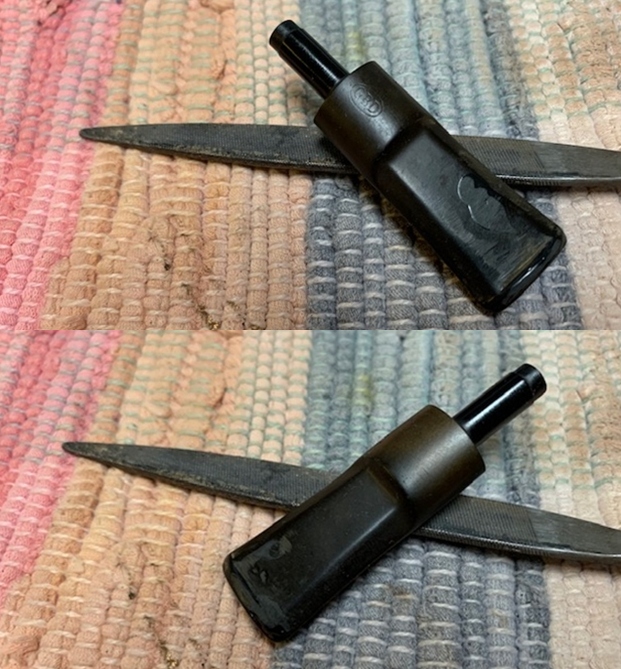 I sanded the stem with 220 grit sandpaper to further blend them in and followed that by starting the polishing with 400 grit wet dry sandpaper.

I touched up the remnants of the GBD oval logo on the stem top with Rub’n Buff Antique Gold. I rubbed the product on the top of the stem and pressed it in the stamping with a tooth pick.

This interestingly stamped GBD London Made 256 Lumberman with a vulcanite saddle stem is a great looking pipe now that it has been restored. The golden colours of the contrasting stains came alive with the polishing and waxing. I put the stem back on the bowl and carefully buffed the pipe with Blue Diamond on the buffing wheel using a light touch on the briar. I gave the bowl and the stem multiple coats of carnauba wax on the buffing wheel and followed that by buffing the entire pipe with a clean buffing pad. I hand buffed the pipe with a microfiber cloth to deepen the shine. The finished GBD Lumberman is a beauty and fits nicely in the hand and looks very good. Give the finished pipe a look in the photos below. The dimensions of the pipe are Length: 5 ¾ inches, Height: 2 inches, Outside diameter of the bowl: 1 ¼ inches, Chamber diameter: ¾ of an inch. If you are interested in adding this pipe to your collection send me a message or an email. Thanks for reading this blog and my reflections on the pipe while I worked on it. There are many more to come! 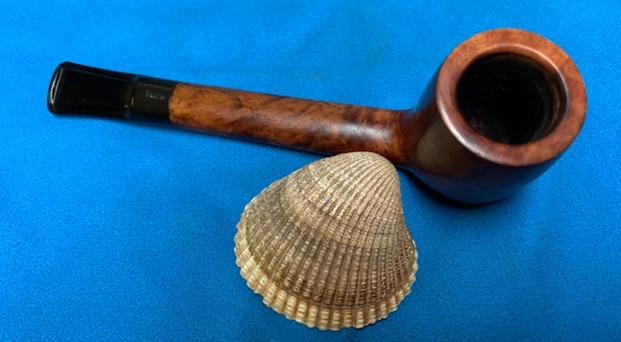 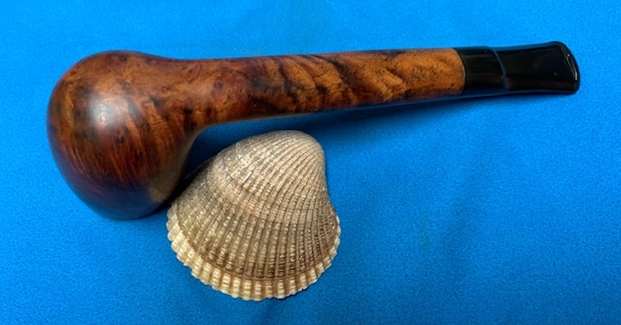 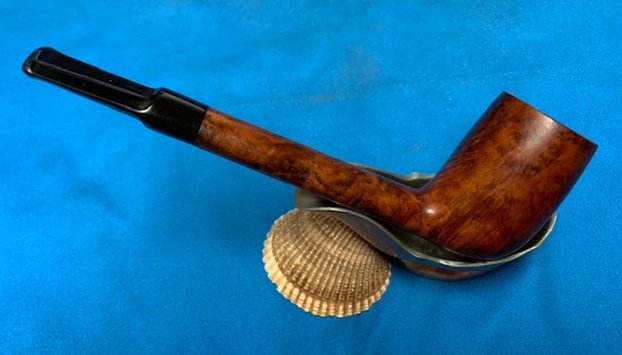 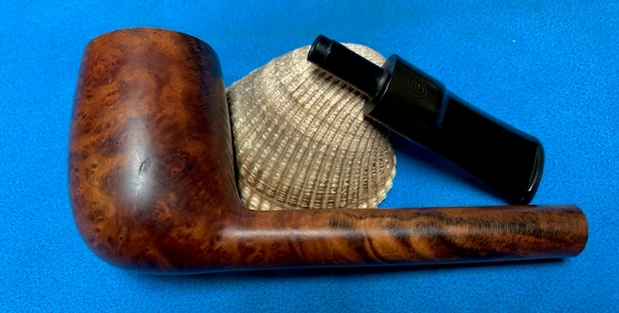 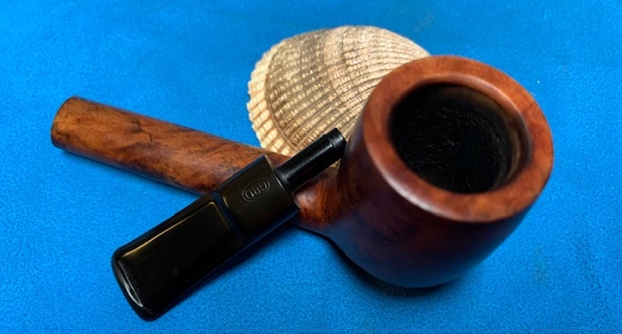 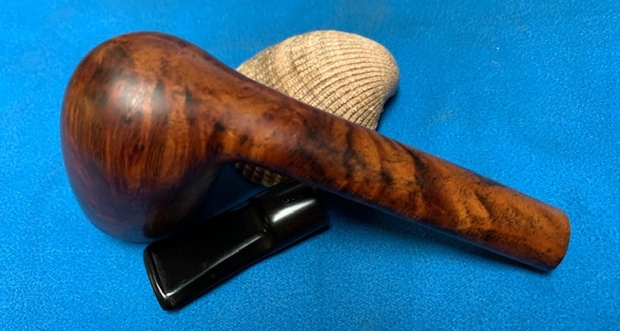 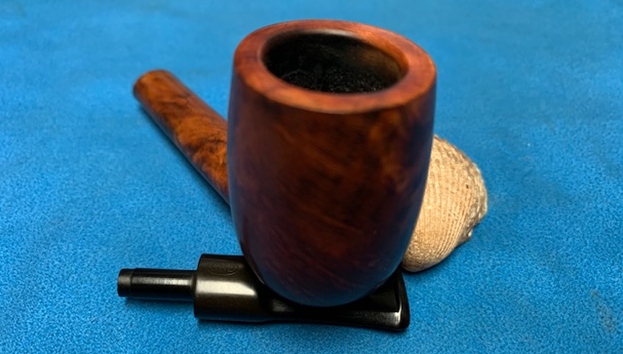