The next pipe on my restoration table is an interesting older pipe that appears to be made out of walnut or some other hard wood. It was tired and worn looking with the remnants of what appeared to be an oxblood stain in the wood. The stamping was dirty and worn but readable nonetheless. On the left side the pipe is stamped Dr. Grabow over Special and on the right side it is stamped with the shape number 4914 near the shank stem junction. That is followed by Pre-Smoked over Reg. US Pat. Off. The rim top was dirty and had some tar ground into it. The bowl had a light cake in it and there was a small nick on the inner right edge of the bowl. It had a hard rubber vulcanite stem with the white Linkman style propeller inset on the top of the stem. The rubber was quite hard and did not show signs of oxidation. There were tooth marks on the top and underside of the stem at the button. I took some photos of the pipe before I started my cleanup. 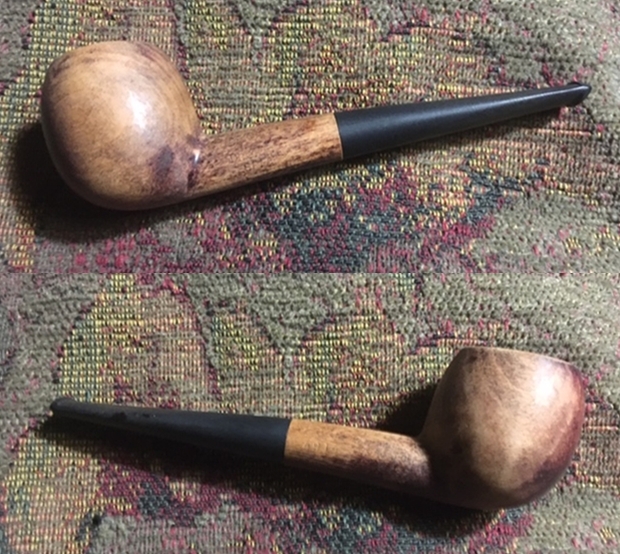 I took some close up photos of the rim top and bowl to show its condition. The tar spots are on the surface. The nick is visible on the right side of the bowl. I also took photos of the stem to show the bite marks and wear on the stem. 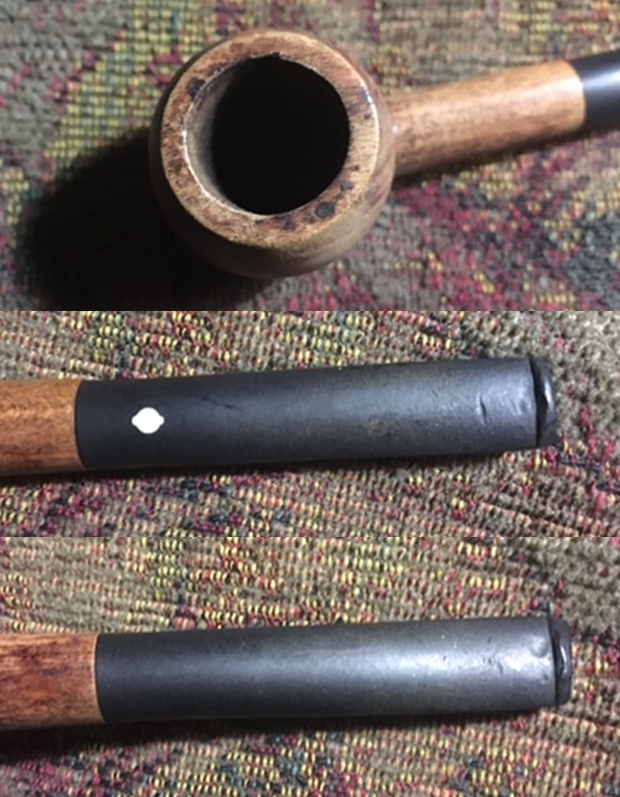 I took a photo of the stamping on both sides of the shank to show the condition. Interestingly once I cleaned the shank up and removed the stain the stamping was very readable.

I looked up information on the Dr. Grabow Special 4914 pipe on Pipedia to see if I could identify the time period that the pipe came from. I had a hunch that it came out during the war years due to the alternative wood that had been used in its manufacture in place of the normal briar (https://pipedia.org/wiki/Dr._Grabow_Models_(Series,Line)_Names_Through_the_Years). Here is what I found out:

Thus I knew that the pipe came out post 1937. I still had not confirmed the date of the pipe other than knowing that it was made after 1937. I did some more digging on Pipedia and found the following information that also helped pin down the date (https://pipedia.org/wiki/Dr._Grabow).

The production of the pipes started in 1930/31. In 1937 Linkman began calling his pipes “Pre-Smoked”. An ad dating from 1946 celebrates it as “America’s Most Wanted Pipes” and the text announced that each Dr. Grabow was broken in on the Linkman’s Automatic Smoking Machine with fine Edgeworth tobacco, reducing the need for the new owner to spend time breaking in his pipe. In 1949 the official name read Dr. Grabow Pipe Company Inc. with seat at W. Fullerton Avenue 1150, Chicago 14, Illinois. (Thus the Linkman factory.) Series: Special, De Luxe, Supreme, Tru’ Grain, Select Grain.

That helped to pin down when the first Pre-Smoked Pipes came out on the market. I have included a couple of advertisements from the 1940s on the Pre-Smoked pipes. The advertisements were on Pipedia courtesy of Doug Valitchka.

I found a similar pipe for sale on eBay (https://picclick.co.uk/Lovely-Vintage-Dr-Grabow-Special-4914-Smokers-Pipe-372388011756.html). It could very well be a twin of the pipe that I am working on. It is also made from an alternative wood, rather than briar.

I started my restoration on the pipe by wiping down the bowl with acetone on a cotton pad to remove the remnants of the oxblood finish. I took photos of the bowl after the cleanup. 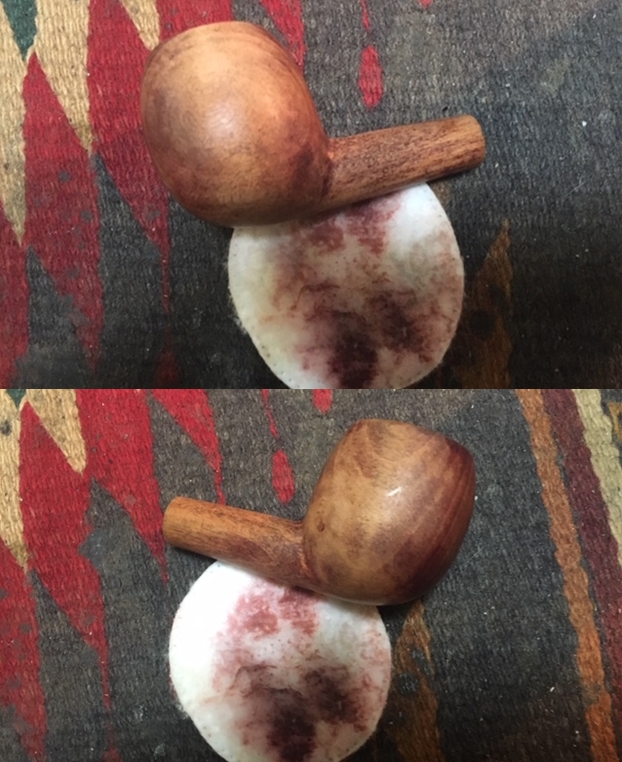 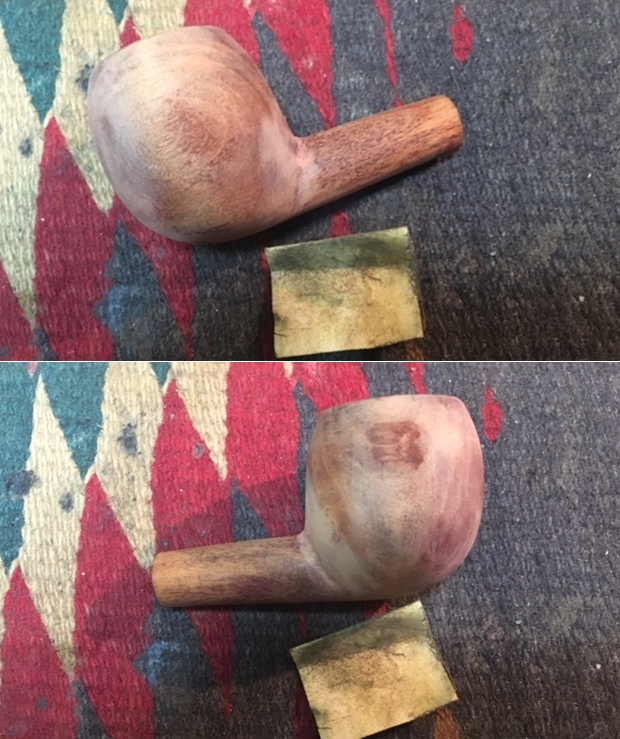 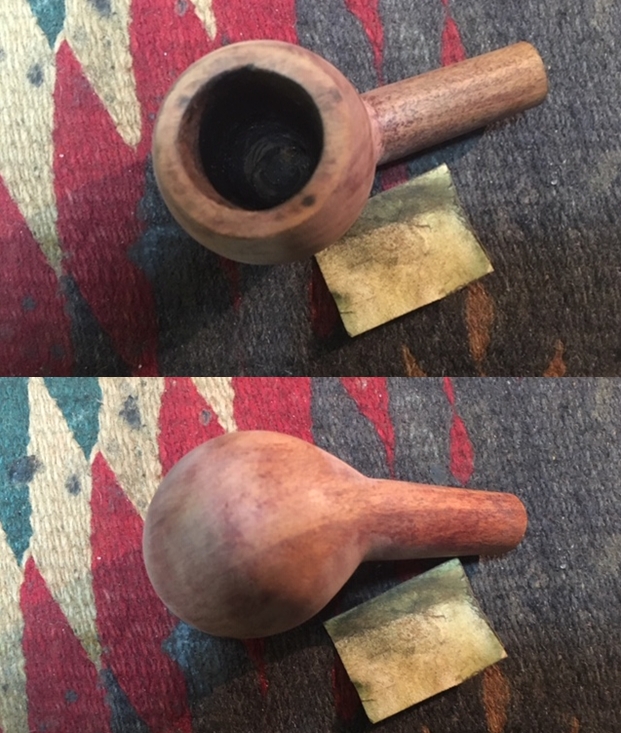 I worked over the inner edge of the rim with 220 grit sandpaper to remove the damaged area on the right side. It did not take too much work to remove it. I polished the rim and bowl with micromesh sanding pads – wet sanding with 1200-2400 grit pads. The bowl began to have a rich shine.

When I sanded the bowl a small red putty fill showed up on the back right side of the bowl. It was slightly pitted. I filled in the pits with clear super glue to remove the damage. I sanded it with 220 grit sandpaper and then with a 1200 grit micromesh pad. 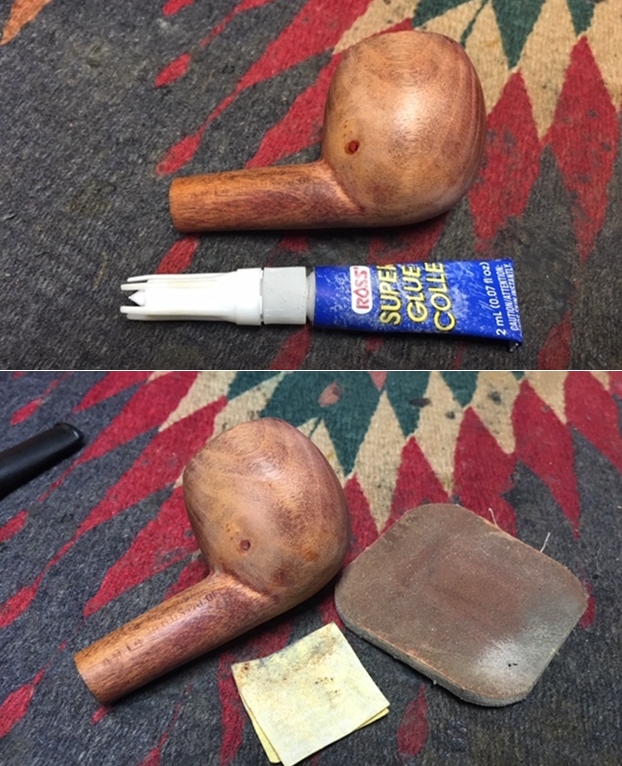 I polished the bowl with red Tripoli on the buffing wheel to smooth out the wood. I heated it and stained it with the “red” tan aniline stain. I flamed it with a lighter and repeated the process until the finish had good coverage. I also gave the bowl a coat of Danish Oil with Cherry stain to highlight the grain. 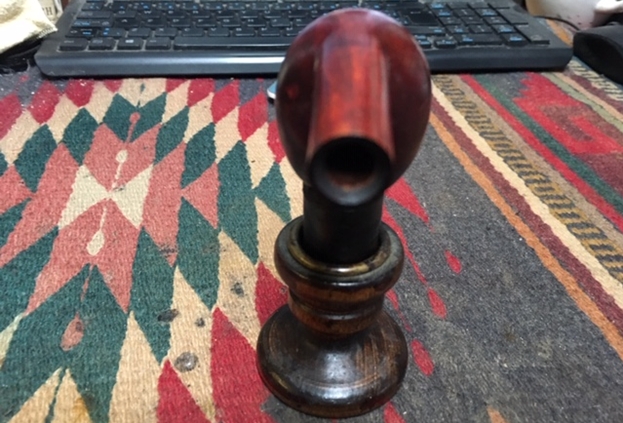 I cleaned out the internals in the stem and the bowl with pipe cleaners, cotton swabs and alcohol. The shank was dirty and the debris and grime that came out made fit of the stem in the shank much tighter.

I set the bowl aside and worked on the stem. I sanded the surface of the stem with 220 grit sandpaper to remove the tooth chatter and the lighter tooth marks. I cleaned it up a soft cotton pad to remove the debris. I filled in the deeper tooth marks with clear super glue to repair them. I set the stem aside to let the repairs cure.

I sanded the hardened repairs with 220 grit sandpaper to blend them into the surface of the vulcanite.

I polished stem with micromesh sanding pads – wet sanding with 1500-2400 grit pads and dry sanding with 3200-12000 grit pads. I wiped the stem down with Obsidian Oil after each pad. When I had finished polishing with the last pad, I gave it a final coat of Obsidian Oil and set it aside to dry. 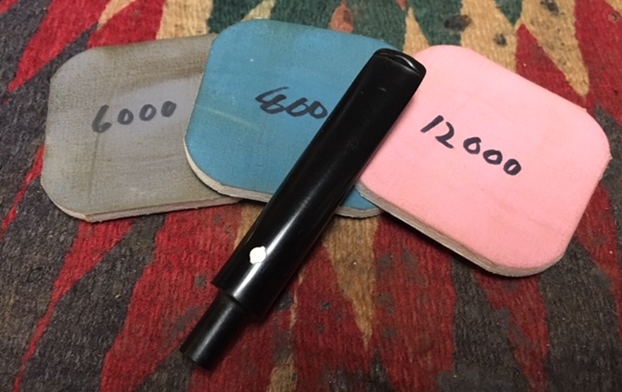 This small war era Dr. Grabow Pre-smoked apple is a unique alternative wood pipe. It has interesting swirled grain around the bowl and cross grain across the shank. The grain really is interesting. The rim top looks much better. The vulcanite stem is high quality and shined up well. I buffed the bowl and the stem with Blue Diamond polish to raise the shine on the briar and the vulcanite. I was careful to not buff the stamping and damage it. I gave the bowl and stem multiple coats of carnauba wax. I buffed the entire pipe with a clean buffing pad to raise the shine. I hand buffed it with a microfiber cloth to deepen the shine. The finished pipe is shown in the photos below. The rich oxblood stain allows the grain to really stand out while hiding the fill in the bowl side of this little pipe and it works well with the rich black of the vulcanite stem. The dimensions of the pipe are: Length: 5 1/4 inches, Height: 1 1/2 inches, Outside Diameter: 1 inch, Diameter of the chamber: ¾ of an inch. This little Linkman’s Grabow apple fits nicely in the hand and makes a great pocket pipe. Thanks for walking through the restoration with me. 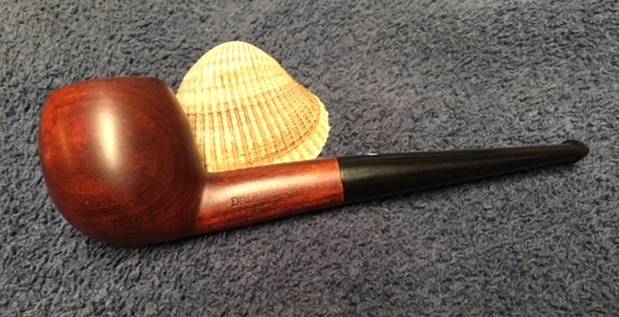 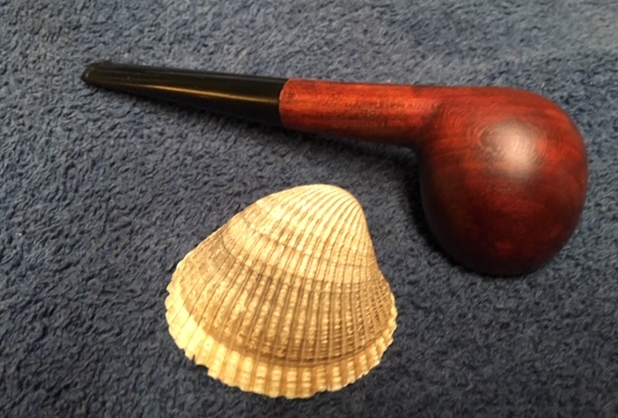 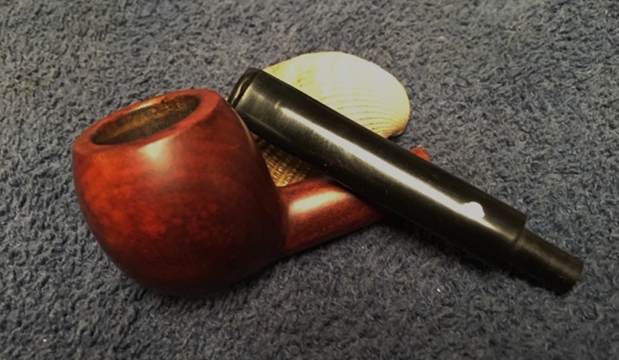 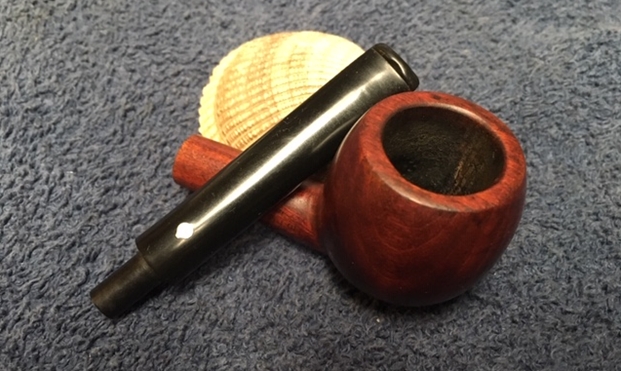 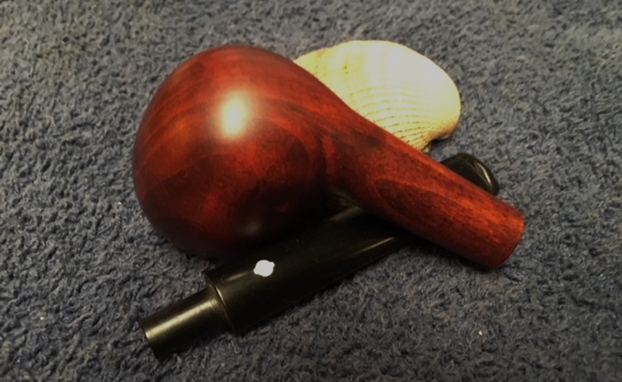 The second Comoy’s on my bench this weekend was a little bit of a mystery. This one also didn’t require a lot of work, but the nomenclature was all but invisible. With a magnifying loupe, I think it is a three digit shape, starting with a 4. I found a shape 434, at SmokingPipes, which is a round shape Liverpool. So, I believe this pipe is also a shape 434, but the finish is undetermined (probably a tradition). The pipe has the three-piece C stem logo, so it was made before 1981. Below we see the shape example from SmokingPipes (this one a Blue Riband!)

Below is the pipe as received. There was a heavy layer of oxidation on the stem, with a few teeth indentions. A heavy layer of build-up was on the bowl-top and it had a very thick cake in the bowl. Tobacco buildup in the shank prevented the stem from being inserted flush.

I used a lighter to lift the teeth indentions on both sides of the stem. A worn scotchbrite was used to remove the build-up on the bowl top. The bowl was reamed, then soaked with alcohol and sea salt. While the bowl was soaking, the stem was soaked in a mild oxy-clean solution. I put a dab of grease on the C stem logo.

Following the soak, the shank was cleaned and stem inserted. Now that the shank was clean, the stem was able to be inserted flush and it had a nice, snug fit. I removed the oxidation with 400, 800, 1,000, 1,500 and 2,000 grade wet paper, followed by 8,000 micromesh. The stem was then polished with White Diamond and Meguiars plastic polish.

The bowl was buffed with White Diamond and several coats of Carnuba wax. Below is the finished pipe. 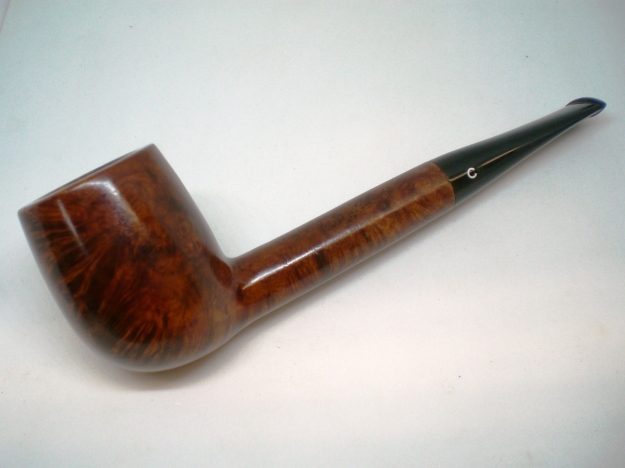 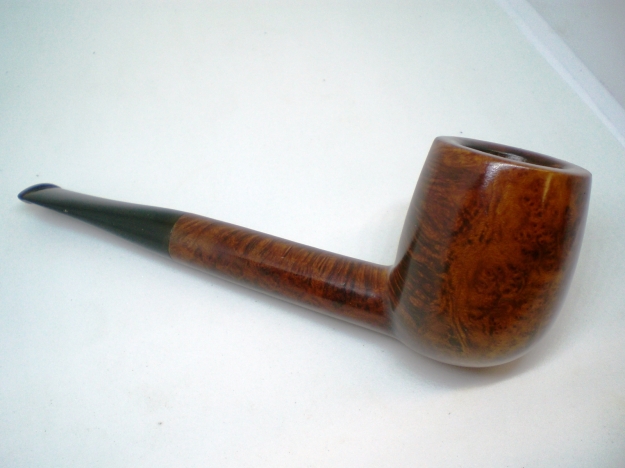 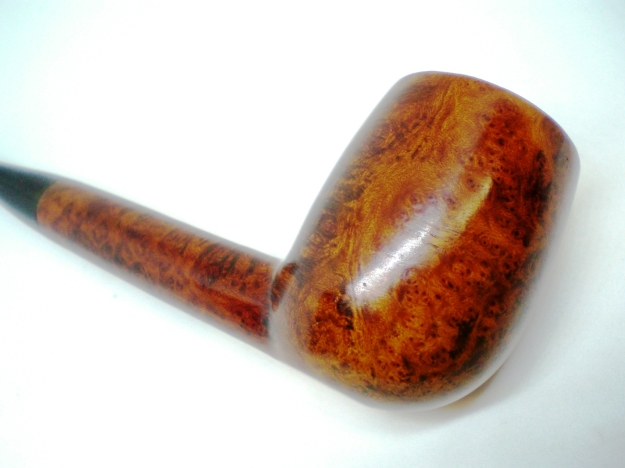 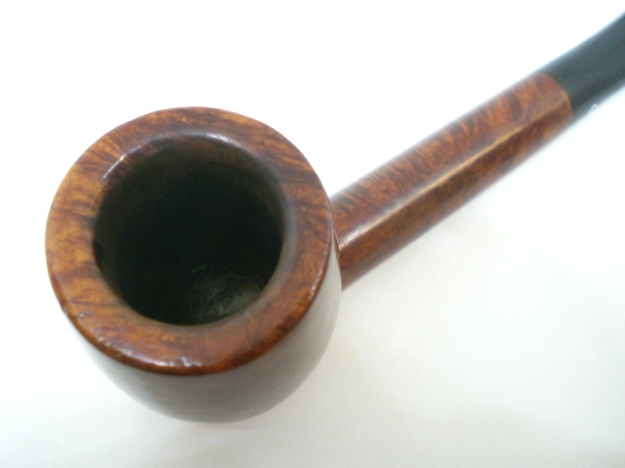 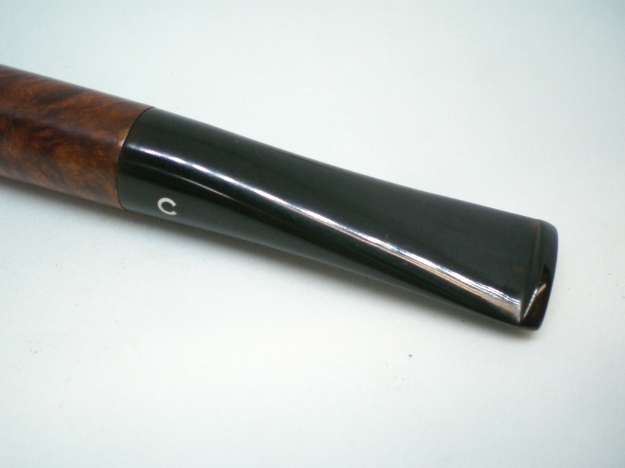 This 409 Bulldog Golden Grain found its way to my work bench this weekend. The 409 is the most popular Comoy’s bulldog, but I’ve only worked in three versions of this shape in the past seven years. It’s not certain when the Golden Grain entered the Comoy’s line up. The COM and three-piece C stem logo were used from 1946 to the merger in 1981.

The pipe had some build-up on the bowl and the stem was heavily oxidized, but overall, it held a lot of promise for a restoration. Below is the pipe as received. 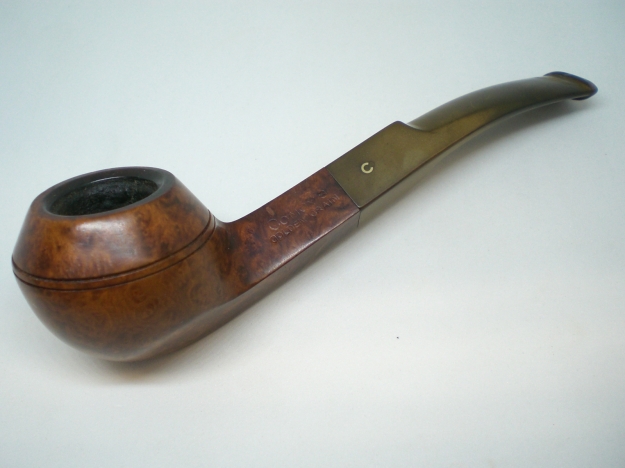 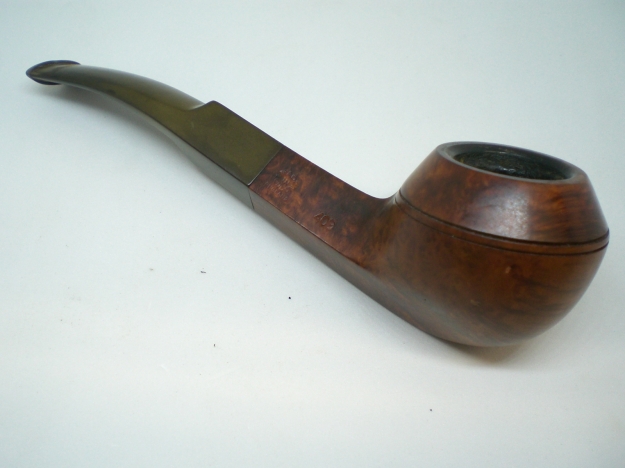 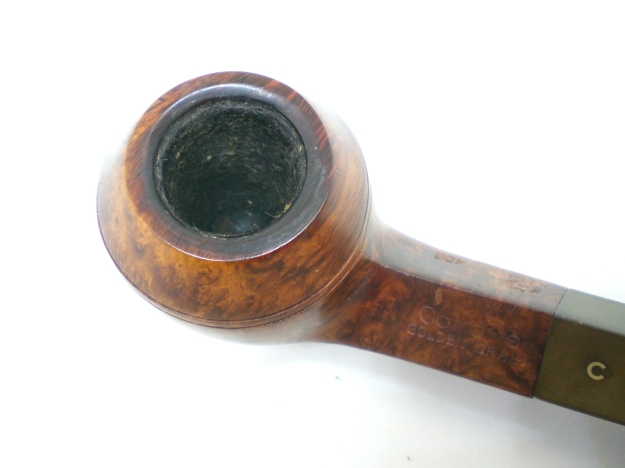 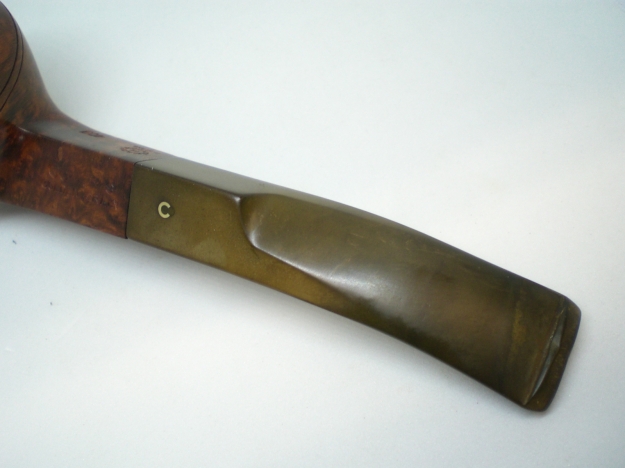 I used a piece of worn scotchbrite to remove the build-up on the bowl top. The bowl was reamed which revealed that the bowl interior was in very good condition. The bowl was soaked in alcohol and sea salt. I picked up an old Sugar dispenser for filling the bowl with salt, which worked very well (sealed with a piece of tape to keep the salt dry). While the bowl was soaking, the stem was soaked in some mild oxy-clean solution. I put a dab of grease on the C stem logo.

The bowl was buffed with White Diamond and several coats of Carnuba wax. Below is the finished pipe. 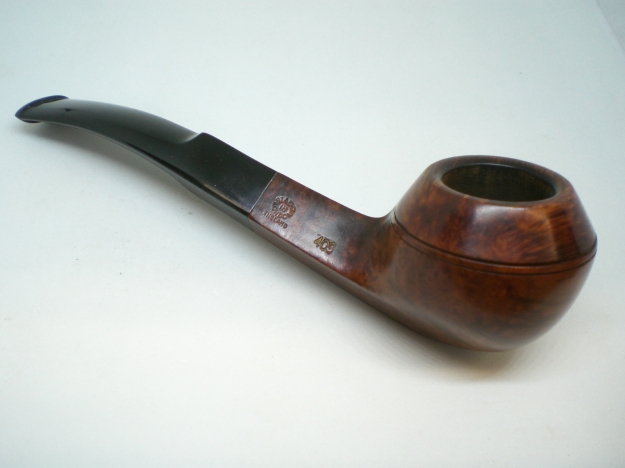