The next pipe I took out of the refurbishing box was an Oom Paul that had a lot of character and some nice grain. It was stamped on the left side with the name Dulwich over Quaint. On the right side it was stamped with the number 64. It was also stamped on the underside, horizontally at the stem shank union with the words Made in England. I have searched for information on the internet for the brand in the past and not been able to find anything helpful. In a previous blog I wrote on a pair of Dulwich Quaint pipes the only link I could find was that the shape number was an Orlik shape number. Here is the link to the other blog: https://rebornpipes.com/2016/03/13/a-rare-find-a-pair-of-fieldcraft-dulwich-quaints/

My brother took some photos of the pipe when he received it and before he had done any cleanup work on it. 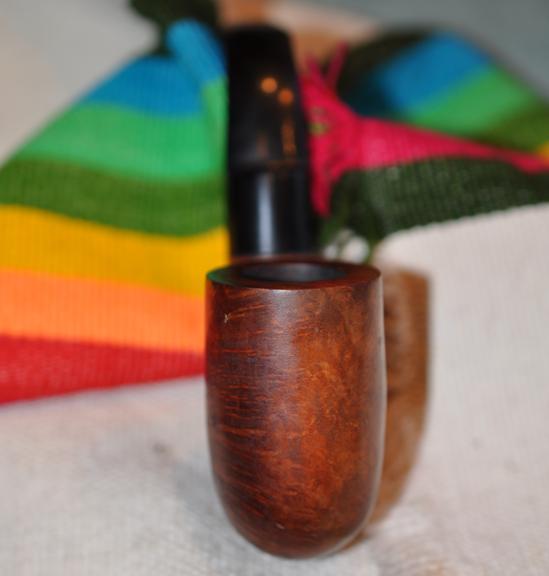 He took some close up photos of the pipe. The first photo shows the top of the rim was in good shape. There was some light tars and some scratching on the surface of the rim. The second and third photos show the stamping – first the Dulwich over Quaint and then the Made in England. 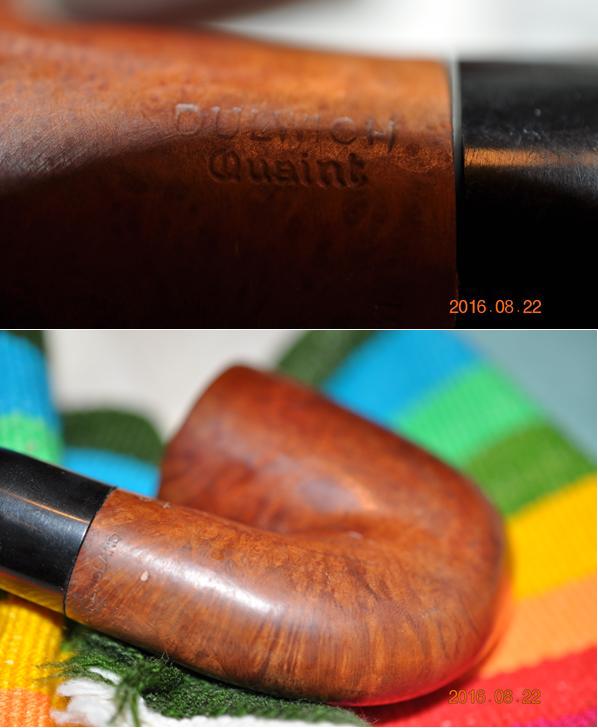 Both sides of the stem looked like the photo below. There was a lot of tooth chatter and marks on the stem surface on the top and bottom. The button was worn down by teeth mid button.

My brother scrubbed the pipe with his usual mixture of Murphy’s Oil Soap and water. He rinsed the bowl with running water. He scrubbed out the internals of the pipe with pipe cleaners, cotton swabs and alcohol. When it arrived I took the following pictures to show its condition. The finish was worn and uneven all around the bowl. The shank was also unevenly finished. The finish on the rim was also worn. 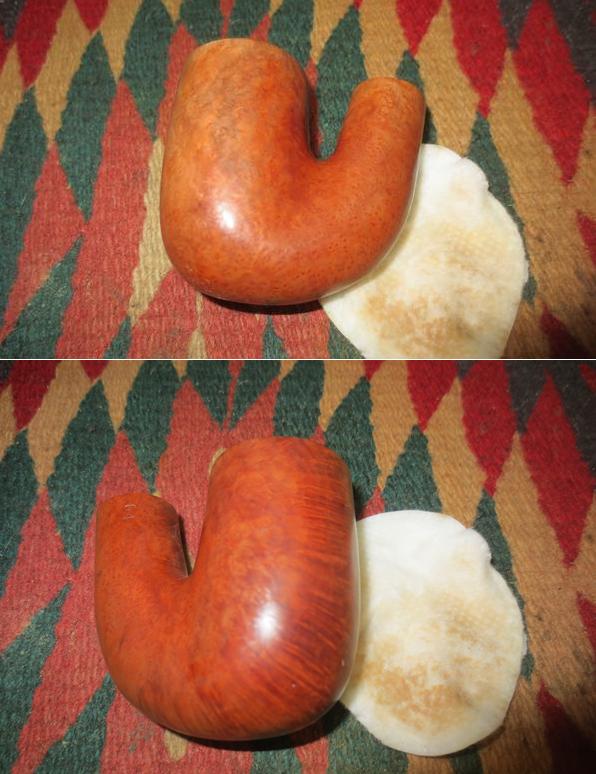 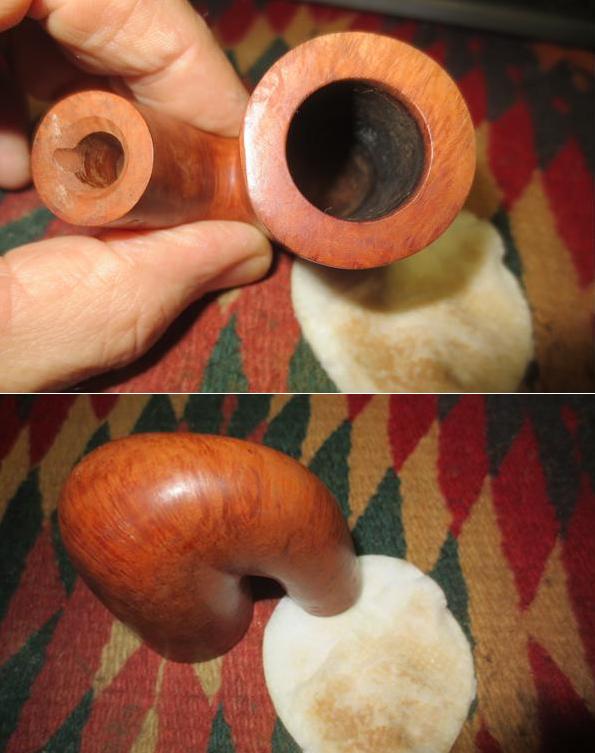 I removed the stinger from the end of the stem and sanded the saddle portion of the stem to smooth out the scratches.

I wiped down the bowl with a light coat of olive oil and hand buffed the bowl to give it a shine. The next photos show the bowl at this point. 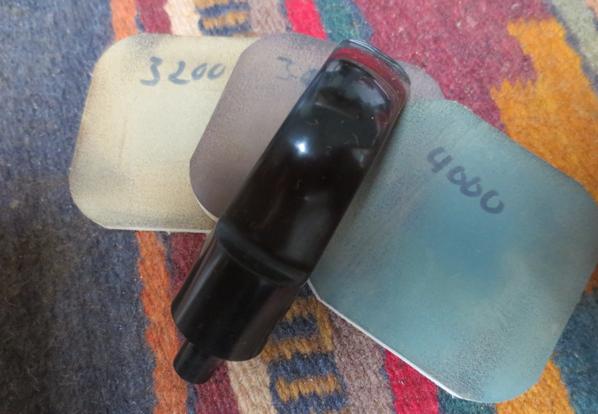 I buffed the bowl and stem with Blue Diamond on the buffing wheel to smooth out the finish and the stem. I gave both multiple coats of carnauba wax and buffed it with a clean buffing pad. It raised a shine on the bowl and stem. I used a microfibre cloth to deepen the shine. I hand buffed it until it shone. The finished pipe is shown in the photos below. It has a wide open draw and should be a delightful smoking instrument. Thanks for looking. 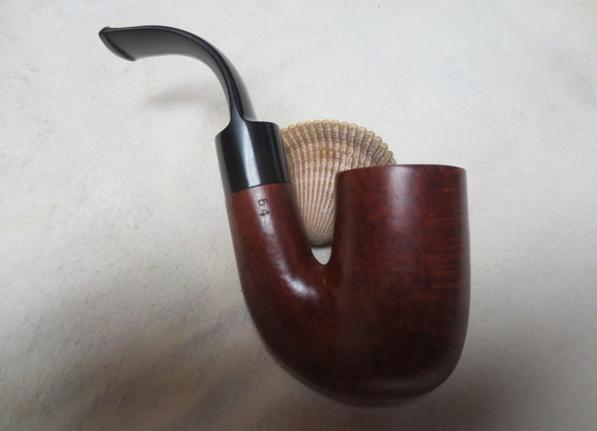 I leave Bulgaria Monday, to join my family as we celebrate the wedding of my youngest daughter, who will be married to my future son-in-law in Nashville, November 6th!  I decided to give my future son-in-law a wedding gift – not just my beautiful daughter!, but also his choice from among the pipes that I’ve restored.  I sent him a picture of pipes that all have been published on rebornpipes.com and encouraged him to look at the write-ups by searching my name and to choose the pipe he favored.  His choices were (from top to bottom), the No-name from Sozopol that was just published as my Dremel Polishing Techniques essay; Horn stem throw-away Pipe; a Butz-Choquin Rocamar with a Cumberland stem, a Jeantet Fleuron and, at the bottom, a Denicotea Deluxe Curling.

He chose well.  He was drawn to the Butz-Choquin Rocamar (center, above) with its eye-catching Cumberland stem.  After I received the text message with his choice solidified, I picked up the BC Rocamar and took a closer look at it.  The thought that ran through my mind was that somehow the finish had dulled and I wanted to spruce it up a bit before wrapping it and packing it to the US.  Then on a hunch, I decided to look back at the write up that was published on rebornpipes in July and see if the finish had indeed dulled or was it the way I had finished it?  After a quick look at the BC’s restoration, I realize that I’m looking at the same finish that I gave the pipe then.  In that restoration, I did the full micromesh phase (9 pads) and followed with staining the stummel.  Then I by-passed Tripoli and Blue Diamond compounds and went directly to carnauba wax with a cotton cloth wheel, then a buff with a clean cotton cloth wheel, concluding with a microfiber cloth rub down.  Since I had just completed the Dremel Polishing Technique essay for Steve, I find myself comparing the finishes of the later pipes with the BC and there was a distinct difference.  The luster and depth of the briar grain was much more distinct in the more recent pipes that I’ve restored.  A wonderful thought came to mind – the Dremel technique and process that I’ve been honing in on really DOES work!  I’m not just blowing pipe smoke up to people reading these blogs and who use a Dremel! J  The next thought was to write an addendum to the Dremel Technique essay and run the BC through the polish process again – as I’m doing it now, and see if I can detect and record a substantive advance in the finish of the BC Rocamar (by the way, the BC Rocamar is a pipe of Saint Claude, France).  My approach is to reverse time with the BC by applying both Tripoli and Blue Diamond with felt wheels, at the lowest RPMs available, and work it to the end of the process as fully described in detail in the Dremel Technique essay (Link).  After completing the process again with the BC, I retook pictures as closely as I could to mimic the pictures of the BC’s restoration in July.  I did this to compare the effectiveness of the Dremel approach I’m using now to what I did before.  Here’s what I found: 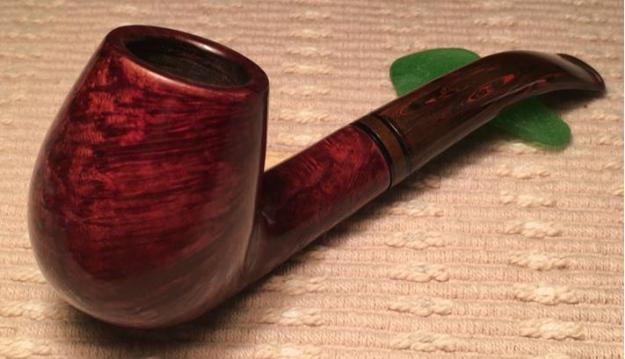 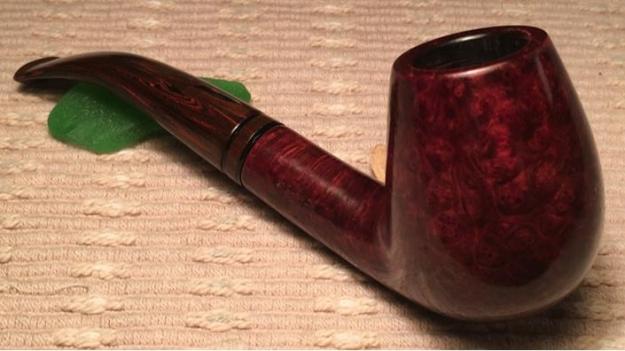 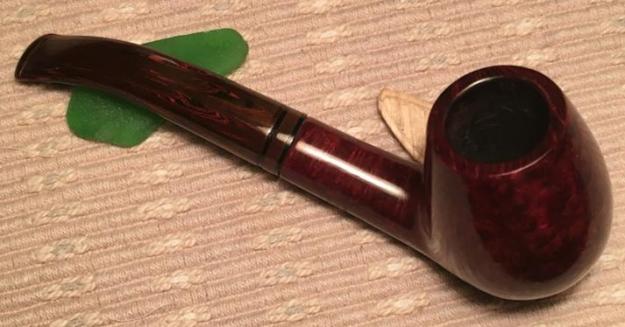 Disclaimer: This definitely was not a scientific test, but I will let you judge stem and stummel! I’m pleased with the results that I see before me today compared to July. I’m not sure the pictures do full justice to the view the naked eye enjoys of the rich briar grain, but I will be very happy and pleased indeed to wrap this reborn pipe and bring it to my future son-in-law as a gift from his future father-in-law. This special gift from my hands and prayers from my heart entrust this soon-coming marriage into God’s able hands. Thanks for joining me!

I’ve slowly been adding the occasional Bill Taylor Ashton to my collection and this one completes a seven-day set. I’m a big fan of the XX size and all but one have that designation. The XX size runs around 50 grams, which is right in my wheel-house.

This is my second Sovereign grade Ashton. This RD Field webpage describes the various Ashton grades.

The Sovereign is described as:

The ASHTON Sovereign pipe is rare indeed, for out of every 100 flawless bowls that undergo the ASHTON oil curing process very few come out unscathed. For as the hot oil exudes from the bowl, bringing with it all manner of impurities. Sandspots are brought to the surface as well.

This one came via Steven Fallon’s ebay site, aka The Pipestud. Steve sells unrestored pipes, which works for me. This one was in great shape, needing only a mild clean-up. The Ashtonite stem was only slightly oxidized and the material polishes up brilliantly.

There was a very slight cake in the bowl and a little rim darkening. I used 8000 grade wet micromesh to polish the bowl top. The stain was slightly faded in spots, perhaps from display and the sun? I wiped on a greatly diluted Medium Brown Fieblings stain to brighten it up. The bowl was polished with White Diamond and several coats of Carnuba wax.

I polished the mild oxidation with 1000 grade paper, then 2000. That was followed by 8,000 and 12,000 grade micromesh. The stem was then buffed with White Diamond and Meguiars Carnuba wax.

Below is the finished pipe. The “26” stamp marks it as being made in 2006 (For Bill Taylor Ashtons – 1980 + the two-digit date stamp).
Not all Bill Taylor pipes are drilled properly, but this one was and it passes a cleaner nicely. It also smoked wonderfully, which was not surprising, since it was so clean. 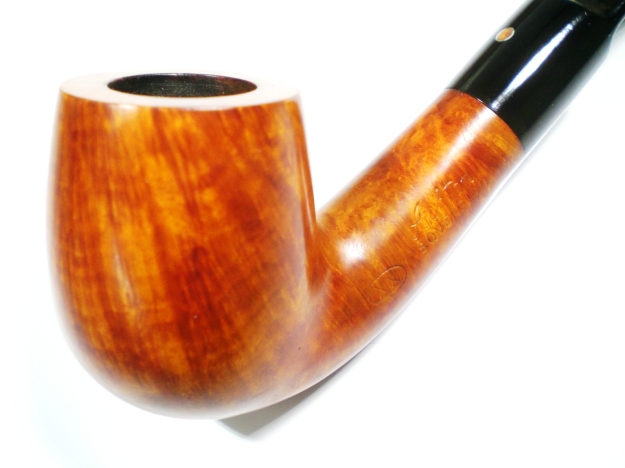 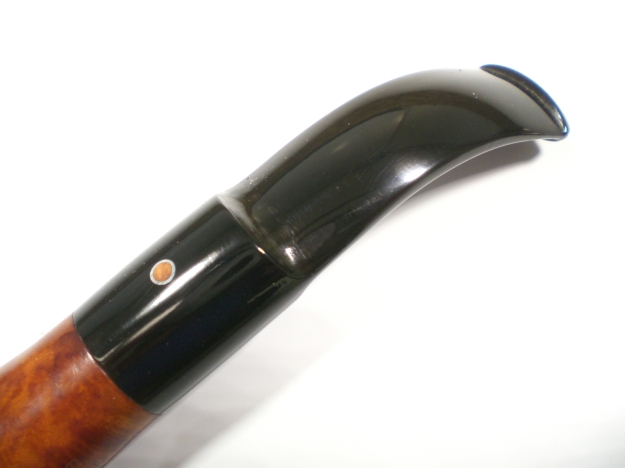 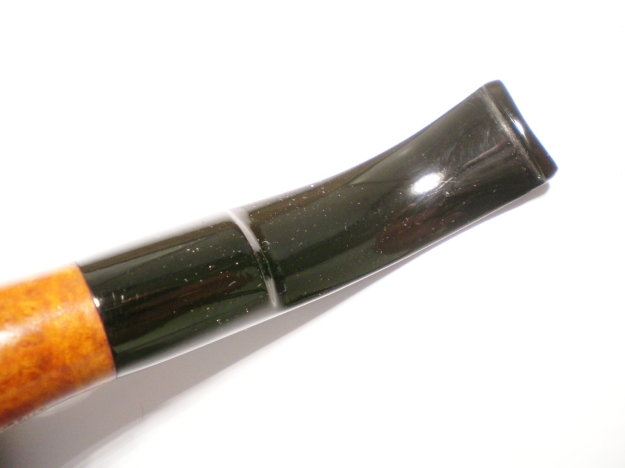 This Century finish GBD came via a seller in Portugal. The pipe looked to be in great shape, with only an oxidized stem and some bowl top build-up. The pipe from the pre-Cadogan era, with the brass rondell and straight-line “London, England” stamp (COM = Country of Manufacture mark). The Century finish is said to have been introduced in 1950 and described as:

“A golden finish created to celebrate over a century of manufacturing the
finest briar pipes.”

GBD started making meerschaum pipes in 1850, so I suppose that introduction date makes sense. This is one of many times that I wish there was a definitive book on GBD pipes.

Below is the pipe as it was received. I’ve never had the 5031 shape before. It is quite graceful and comparable to the Dunhill 120, on a slightly smaller scale. The pipe weighs only 31 grams 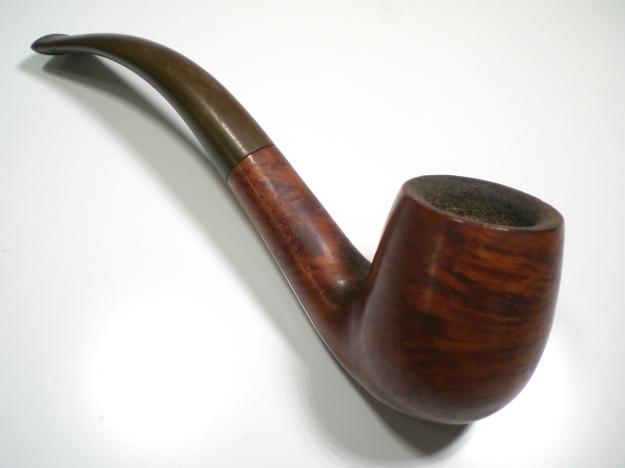 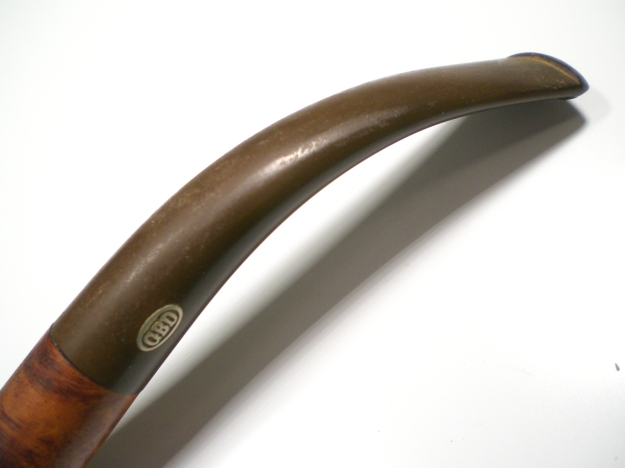 Curiously, this one had a push-in stinger apparatus. I’ve worked on over 100 GBD’s, including several Century pipes, but this is the first time that I’ve encountered a stinger. Dating GBD’s is only a broad stroke and the only sure bet is that this one was made before the merger in 1981. But, the stinger makes me think it might be closer in age to 1950 than 1981. In the later years, stingers fell out of favor with pipe smokers. The stinger pulled right out. Not all full bent GBD’s will pass a cleaner, but this one does.

I used a cloth and distilled water to remove the bowl-top build-up. I finished with 2000 grit wet paper and then 8000 grade micromesh. This leaves the stain intact and the beveled-bowl top polished up nicely. The bowl was reamed and I found the interior in excellent shape. It was then soaked with sea salt and alcohol. While this was happening, the stem was soaked in a mild Oxy-Clean solution.

The stem was mounted and I removed the first layer of oxidation with 800 grit wet paper, followed by 1000 and 2000 grades. Next was 8,000 and 12,000 grade micromesh sheets. The stem was then buffed with White Diamond and Meguiars Plastic polish. The vulcanite on this one has a very high grade feel and is comparable to the few GBD’s that I have stamped “Hand Cut”.

As you can see in the “Before” photo’s, the stem had a slight gap on the top position. I warmed the tenon slightly with a heat gun and using a metal pin punch inserted into the tenon, I adjusted it slightly, then put the tenon in cold water to set the position. That worked nicely and the finished stem fitment was excellent

The bowl was polished with White Diamond and several coats of Carnuba wax. The nomenclature was in great shape, so I was careful to only hand-polish those areas.

Below is the finished pipe. I reluctantly posted this one for sale and a friend of mine grabbed it. I have to deliver it to him quickly, before I regret my decision! 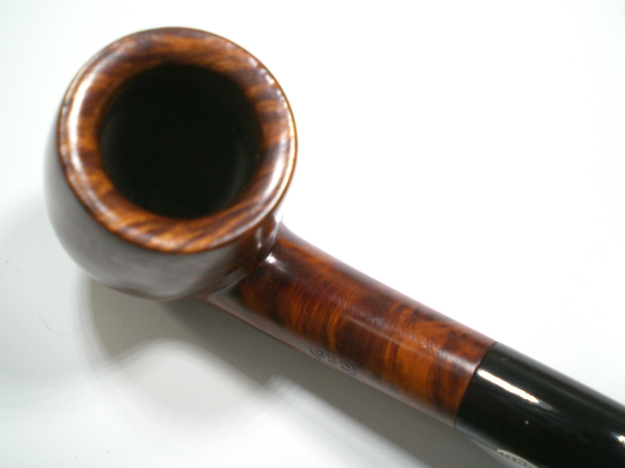 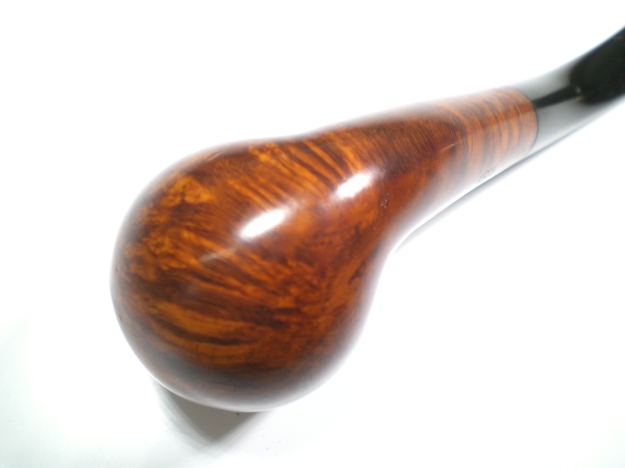