The next pipe on the table is another Dunhill but one that I am not sure how to identify the shape. It is kind of a scoop with a long oval shank but the shape number is not on any charts that I have looked at. Even though it has five digits the number is the same as a four digit number. The extra digit defines the bowl style. Anyone have any idea what to call this or perhaps can give me a chart that shows the number? Much appreciated. Jeff and I purchased on 04/26/2022 from a woman who contacted us from Cleveland, Ohio, USA. We spent time chatting with her and arrived at a price and she sent the pipes to Jeff. It included another 28+ pipes with this one.

But now this Dunhill is the question. On the left side it is stamped 54791 followed by Dunhill over Bruyere and on the right side is stamped Made in England19. I know that it is a Bruyere finish but the shape number still is a mystery. It has a long oval shank, scoop like bowl and a ¼ bent taper stem. The finish was very dirty with spots of grime and debris stuck on it. The bowl had a thick cake in the bowl and heavy lava overflowing onto the rim top. It was hard to know the condition of the top and edges without removing the lava. The stem had calcification, oxidation and tooth marks and chatter on both sides ahead of the button. The button itself appeared to be in good condition. Jeff took photos of the pipe before he started his clean up work on it.

He took photos of the bowl and rim top to show the condition. You can see the thick cake in the bowl and the lava overflowing onto the rim top. It appears to me that the rim is damaged but I will not know for sure until it is reamed and cleaned. It is also hard to know the condition of the rim top at this point. The outer edge of the bowl looks to be okay. The stem was heavily oxidized, calcified and has tooth marks and chatter on both sides ahead of the button. Overall the pipe is a real mess. 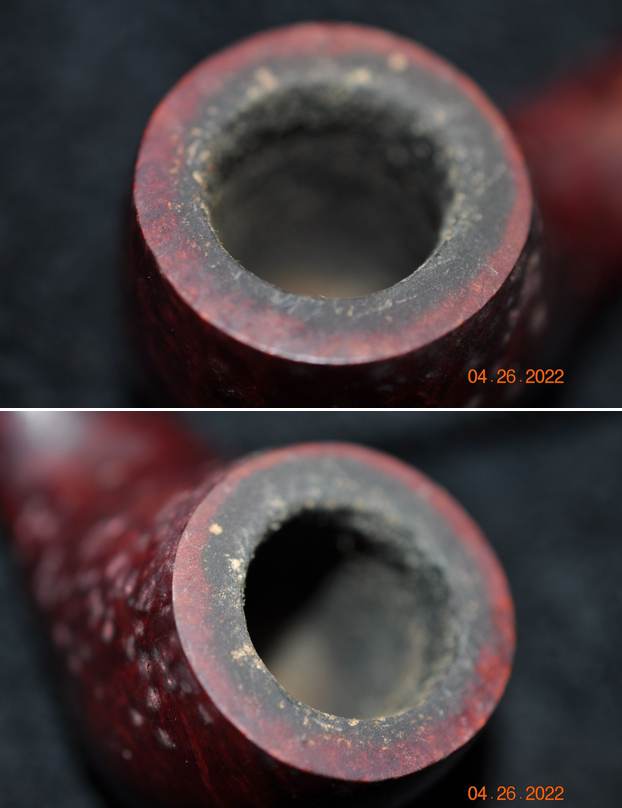 Jeff took photos of the grain and finish around the bowl sides and heel. It was nice looking if you can see through the grime ground into the finish.

He took a photo of the stamping on the left side of the shank. There is no photo of the right side stamping that gives the Made in England date code. It is readable but filthy.

Now it was time to begin to work on the stamping on the pipe. I turned first to Pipedia as I remembered they had some great information on the Bruyere finish and dates and how the finish was made (https://pipedia.org/wiki/Dunhill#Bruyere). The first quote below give the short version of the finish. The second link goes into more detail. I quote from both below.

Bruyere – The original finish produced (usually made using Calabrian briar), and a big part of developing and marketing the brand. It was the only finish from 1910 until 1917. A dark reddish-brown stain. Before the 1950s, there were three possible finishes for Dunhill pipes. The Bruyere was a smooth finish with a deep red stain, obtained through two coats, a brown understain followed by a deep red.th

With that information clear for me I wanted to identify the shape number and try to pin that down (https://pipedia.org/wiki/Dunhill_Shape_Chart). I turned to the section on the Five Digit Shape Numbers and read it. I quote it below and added a chart on the numbers.

The 5th digit indicated the style of the bowl within the group of a similar classification, each identified by the last digit, which could be any number between 1-9.

Although the 5-digit code was stamped on the pipe and thus was visible to the consumer, it was mostly used for internal production planning purposes and to a lesser extent for retail staff. The system proved to be quite complex.

The elimination of the 5th digit on the pipes (in 1984) resulted in better management of the pipe stock as there were less skus and it also facilitated the work for the sales staff in the retail shops as the complexity and number of skus was considerably reduced.

I turned next to dating the pipe as it would be more straightforward than the numbering on the shank. There is a superscript 19 following the D in ENGLAND on the right side of the shank. I turned to the dating chart on Pipephil (http://pipephil.eu/logos/en/dunhill/cledat-en1a.html). I did a screen capture of Part 2 of the Dunhill Dating Key and included it below. It is clear that the pipe was made after 1954 so that is why I went to Part 2. Because the year suffix is 19 that tells me that the pipe was made in 1960+19 for a date of 1979.

Armed with that information I turned to work on the pipe itself. Before he sent it to me, Jeff had done an amazing job cleaning the pipe. It almost looked like a different pipe after his work. He reamed the pipe with a PipNet pipe reamer and removed the rest of it with a Savinelli Fitsall Pipe Knife.  He scrubbed the bowl with undiluted Murphy’s Oil Soap with a tooth brush. He rinsed it under running warm water to remove the soap and grime. He cleaned out the inside of the shank and the airway in the stem with isopropyl alcohol, cotton swabs and pipe cleaners. He soaked the stem in Briarville’s Pipe Stem Deoxidizer and then rinsed it off with warm water. He scrubbed the stem with Soft Scrub and a tooth brush and rinsed it off with warm water. It looked amazing when I took it out of the package of pipes he shipped me. I took photos of the pipe before I started my part of the restoration work.

The rim top was cleaner and the inner edge of the bowl looked rough. There was burn damage all the way around but heavier on the left half of the bowl. There was also darkening on the edge. The outer edge looked good. The stem surface looked good with the oxidation gone and light but visible tooth marks and chatter on either side of the stem. 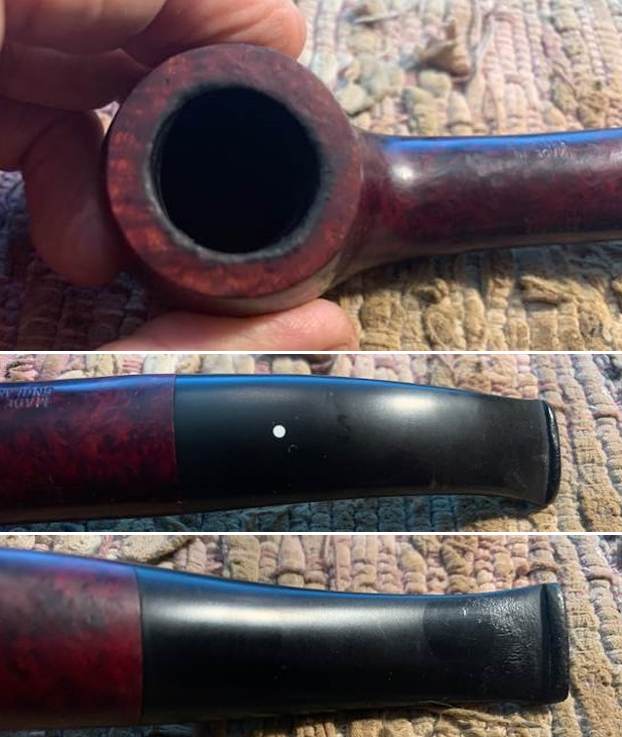 I took photos of the stamping on the sides of the shank. It is clear and readable as noted above. 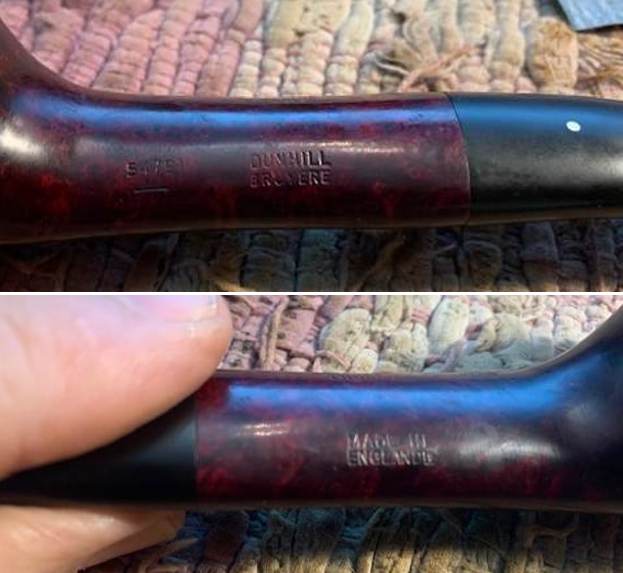 I took the stem off the shank and took a photo of the parts of the pipe. The overall look of the pipe is quite unique. The stem shorter than the bowl and shank but looks quite good.

I started my portion of the work on this pipe by addressing the damage to the rim top and inner edge of the bowl. I used a folded piece of 220 grit sandpaper to smooth out the edge and give it a slight bevel to deal with the chipping and cutting on the inner edge. It cleaned up remarkably well. With polishing and buffing it would look even better. 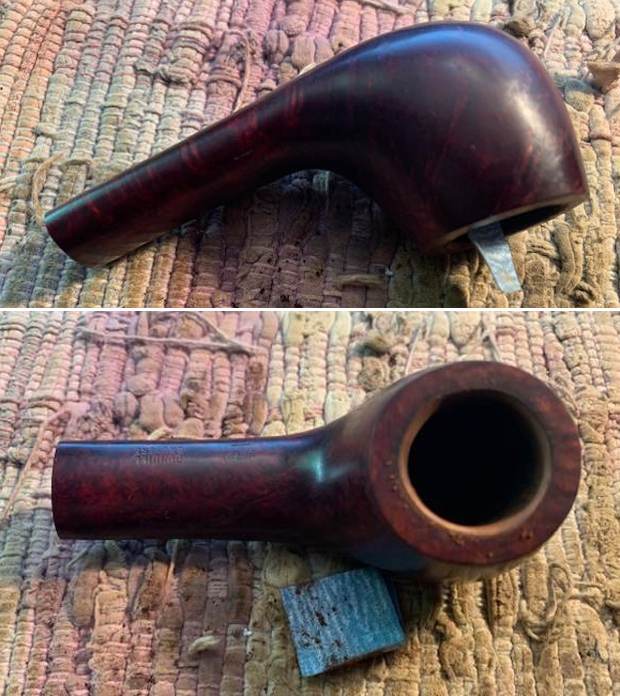 I polished the briar with micromesh sanding pads – dry sanding with 1500-12000 grit pads. I wiped the bowl down with a damp cloth after each pad. The rim top looked very good and the bowl began to take on a rich glow. 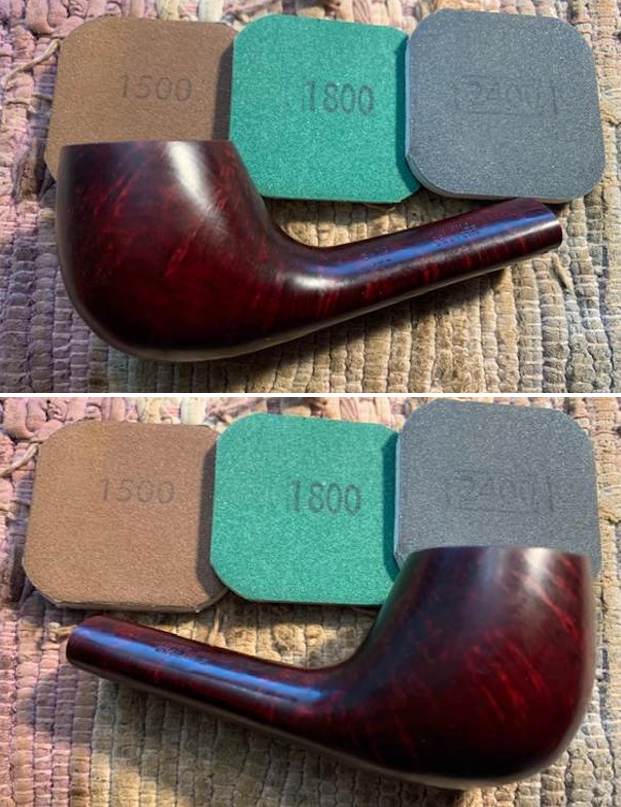 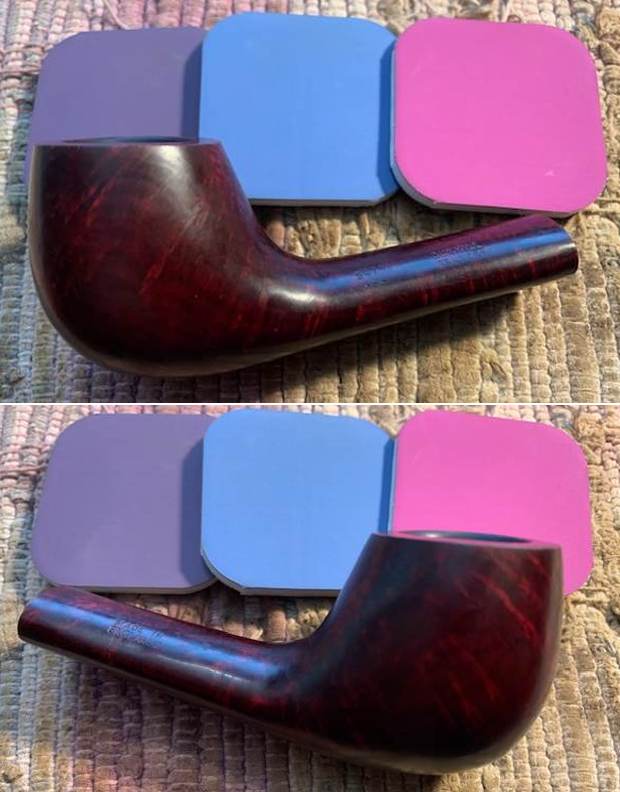 The bowl looked very good at this point so I rubbed it down with Before & After Restoration Balm. I worked it into the surface of the bowl and shank with my fingertips to clean, enliven and protect the briar. I let the balm sit for about 10-15 minutes and buffed with a cotton cloth to raise the shine. 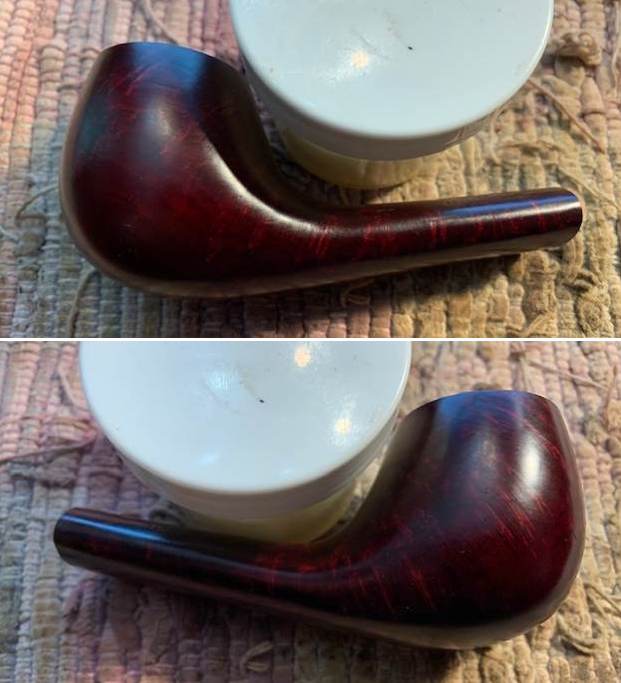 I set the bowl aside and turned to work on the stem. I “painted” the surface of the stem ahead of the button with the flame of a lighter to raise the tooth chatter and marks. It worked exceptionally well and all were lifted enough that sanding what remained removed them. I sanded the stem surface with 220 grit sandpaper and started polishing it with 400 grit wet dry sandpaper. 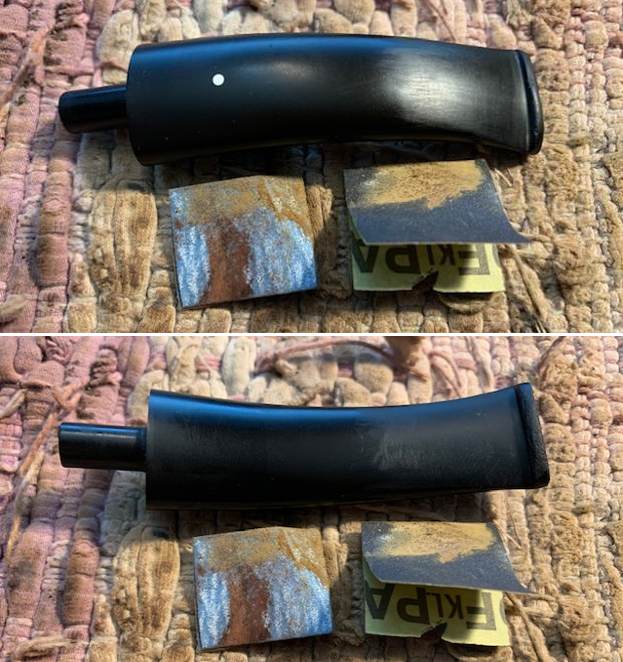 I polished the vulcanite stem with micromesh sanding pads – 1500-12000 grit pads. I wiped it down with Obsidian Oil after each sanding pad. I used Before & After Pipe Polish – both Fine and Extra Fine to further polish the stem and gave it a final coat of Obsidian Oil to finish it. 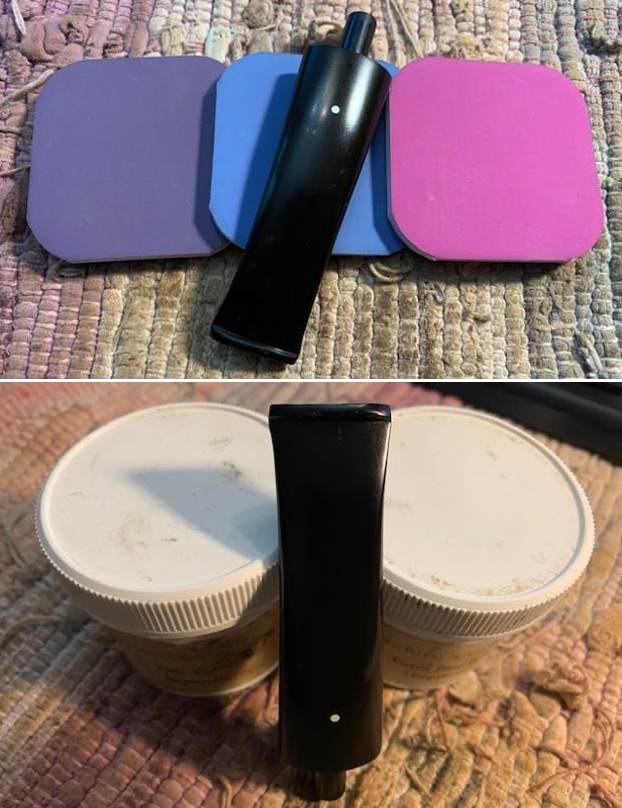 This beautiful and unique 1979 Dunhill Bruyere 54791 Scoop is a great looking pipe now that it has been restored. The rich Bruyere finish that highlights the grain and works well with both the polished vulcanite stem. I put the stem back on the bowl and carefully buffed the pipe with Blue Diamond on the buffing wheel using a light touch on the briar. I gave the bowl and the stem multiple coats of carnauba wax on the buffing wheel and followed that by buffing the entire pipe with a clean buffing pad. I hand buffed the pipe with a microfiber cloth to deepen the shine. The finished Dunhill Bruyere Scoop is a large pipe that will be great for sitting and reading. Give the finished pipe a look in the photos below. The dimensions of the pipe are Length: 7 inches, Height: 1 ¾ inches, Outside diameter of the bowl: 1 ¼ inches, Chamber diameter: 7/8 of an inch. The weight of the pipe is 55 grams/1.94 ounces. I will be adding the pipe to the British Pipemakers section of the rebornpipes store shortly. If you are interested in adding it to your collection be sure to let me know. I take a moment to remind myself and each of us that we are trustees of pipes that will outlive us and the lives of many other pipe men and women who carry on the trust of their care and use. Thanks for reading this blog and my reflections on the pipe while I worked on it. 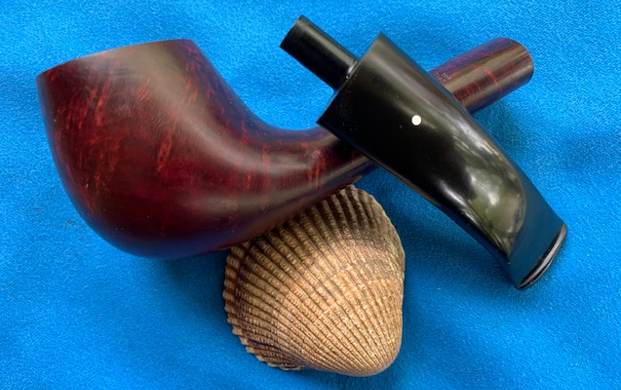 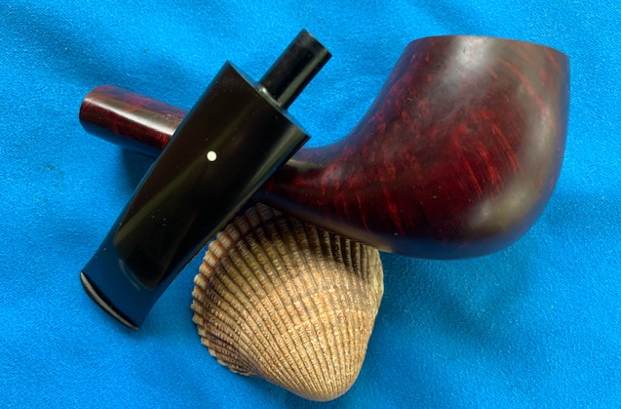 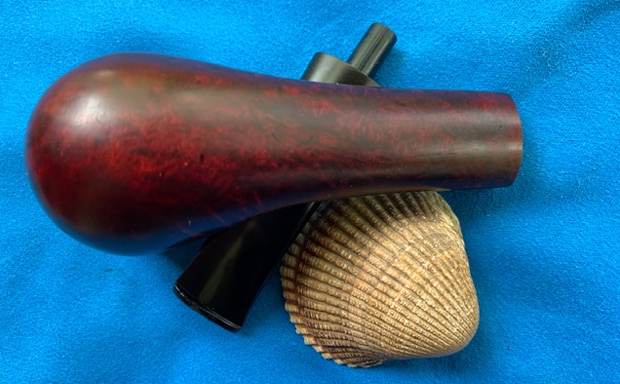 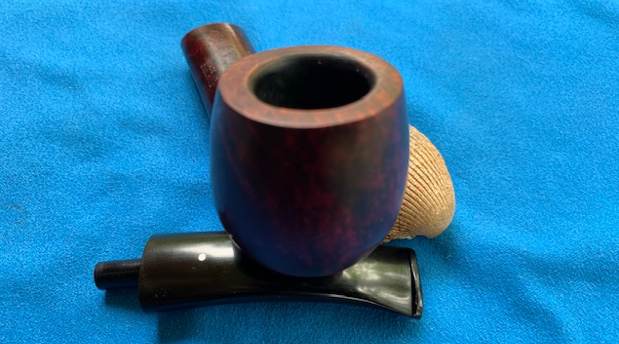