I have worked on several pipes for a fellow in Israel over the past few months and he is great to work with. He has great taste in pipes and the ones he has purchased from me have also been beautiful. Periodically I receive an email from him about another pipe he was interested in purchasing EBay. This next one was one that caught my attention. He sent me the link and wanted my opinion on it. It was a nice Mark Tinsky signed American Pristine 5 Rhodesian. I really liked the look and the Rhodesian with a twin ring cap around the rim top. The pipe appeared to be in decent condition. Not too many days after that he wrote me to say he had won it and he had it shipped to me rather than to him in Israel. We chatted back and forth about it via email and I would let him know when I received it. Here are the pictures that the EBay seller included with the advertising. 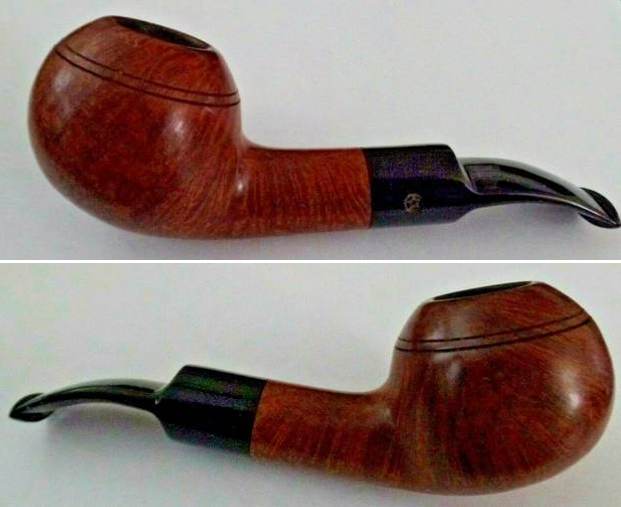 The seller took several photos of the stamping on the left and underside of the shank. It is faint on the left side in the photo but is very readable on the underside. The inlaid American Smoking Pipe Five Point Star in a brass circle is visible in the first photo.

I have collected and smoked Mark Tinsky’s pipes for over 30 years now and thoroughly enjoy them. I cannot speak highly enough about the quality and craftsmanship of his pipe. I have pipes made by Mark and by Curt Rollar in my collection and both are great smokers and pipes that reach for regularly in my choice of pipes. I turned to his website for a quick summary of the history of the brand (http://www.amsmoke.com/Index%20Folder/PipeHist.html). I quote from the site as it is a short, concise history.

The American Smoking Pipe Co. was formed in 1978 by Mark Tinsky and Curt Rollar. Both started making pipes for Jack Weinberger ( JHW Pipes ) while in high school and throughout college. Determined to blaze their own path, they formed their own company- its goal to create unique pipes, lightweight and comfortable, where attention to detail was the rule not the exception. Exulting in their new freedom, they carved out new shapes that were balanced between the radical freehand era of the 70’s and the board pipe look of other conservative companies. Hungry for recognition, they stormed the Eastern and Southern shops looking for markets to sell their pipes. Many hidebound retailers refused to try something new, preferring to sell, well, what has always sold before. However, their pipes did take root in many shops and the business thrived.

They continued expanding their pipe making capabilities, adding employees to help finish the pipes. In 1990, over a disagreement over how much to expand, Curt Rollar left the company. This put a break on expansion and coupled with a U.S. recession and rising anti-smoking fervor served to limit production to supplying existing retailers, thus ending a decade of growth. With pipes sales in decline, we turned to pipe repair as a way to supplement revenues. Finding that we liked fixing things, American concentrated on pipe repair. While working hard at repair and manufacture American is ready once again to expand its markets through its existing network of shops serviced by pipe repair.

With the advent of the Internet, we are exploring marketing pipes directly to consumers in markets not covered by retail accounts. Feel free to e-mail us at MT@MT.NET

From the history reminder, I turned to the section of the site that gave the price breakdown and information on the finishes and stamping of the pipes and stems. I have included that below (http://www.amsmoke.com/Index%20Folder/PRICE.html). The pipe I am working on is noted below with a red square – PRISTINE and the size is a 5 which sells for around $240USD.

He also included a description of the Pristine finish and a photo below that is helpful to me as I restore this pipe.

I am also including Mark’s description of the stamping and logo on the stem below.

Pipes are stamped with :
My signature
The American logo : with the year it was made( starting from 2000) This year reads 00
A Finish stamp
Size indication
Stars for straight grain rating
Special Orders are stamped SO, Special orders are priced using the above structure with possible some additional charge for a very difficult shape.

Difficulty of Shape:. A size six billiard is the same price as the same size hawkbill, which is a lot harder to make.Pipes that are more difficult to make now carry an “X” next to the Size designation. If a pipe is extremely difficult it may carry an XX, tho those are extremely rare.

Gold Star: A grade of pipes that will carry a solid gold star as the logo. So far only three have been made and if I get one every couple years I d consider it lucky.

The pipe I am working on has Mark’s signature as noted above. The American logo with the 00 under the American in the oval tells me that the pipe was made in 2000. The finish is  Pristine and the size is a 5 in a circle. There are no stars for a straight grain rating.

The pipe arrived this week in a Bubble Mailer from the seller. To me it is a questionable way to ship pipes as they can be easily damaged. I was concerned when I opened the mailer to examine the pipe inside. Fortunately the seller had separated the stem and bowl and wrapped each in thick bubble wrap which certainly helped. I examined the pipe carefully to assess both the condition of the pipe and what I needed to do with it. There was a light cake in the bowl and no lava on the rim top or edges. There was a nick in the rim top and inner edge on the right side in the middle. Otherwise the rim top looked quite good. The pipe was stamped on the on the sides the shank and on the left side was the Mark Tinsky signature. On the underside it was stamped American in an oval [over] Pristine [over] 5 in a circle. The finish was surprisingly clean but dull with some great grain hiding in the dullness. The stem had the inlaid metal five point star in a circle logo on the left side of the saddle. The acrylic was fairly clean and there were tooth marks and chatter on the top and underside. I took some photos of the pipe before I started my work on it. I have included them below. 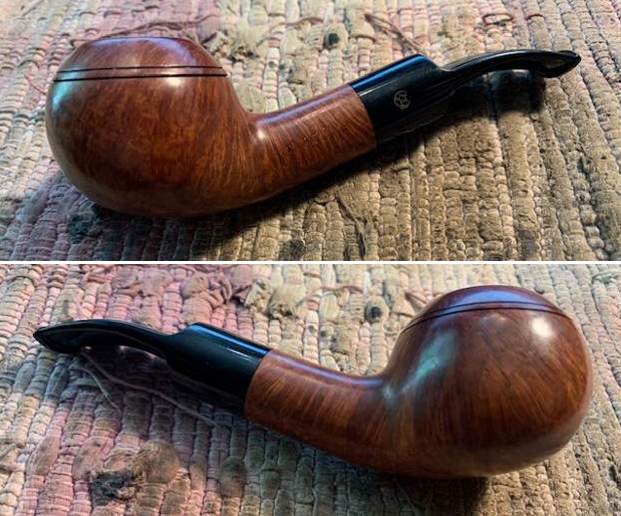 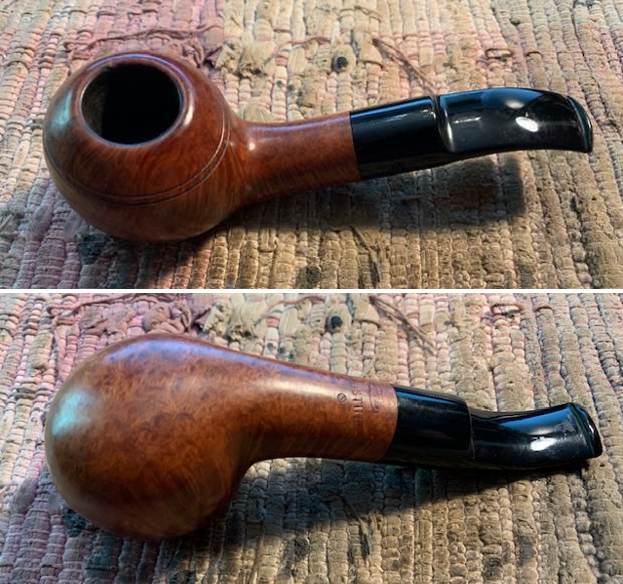 I took a photo of the bowl and rim top to show the thickness of the cake in the bowl and the slight darkening on the inner edges of the bowl. The nick on the rim top and edge on the right is visible in the photo. I took photos of the stem surface to show the condition and tooth marks and chatter on both sides ahead of the button.

I took photos of the stamping on the shank sides (left and underside). It is readable as noted above and though faint is clear. I took a photo of the Silver Star with a black background logo on the stem as well. It is in excellent condition. 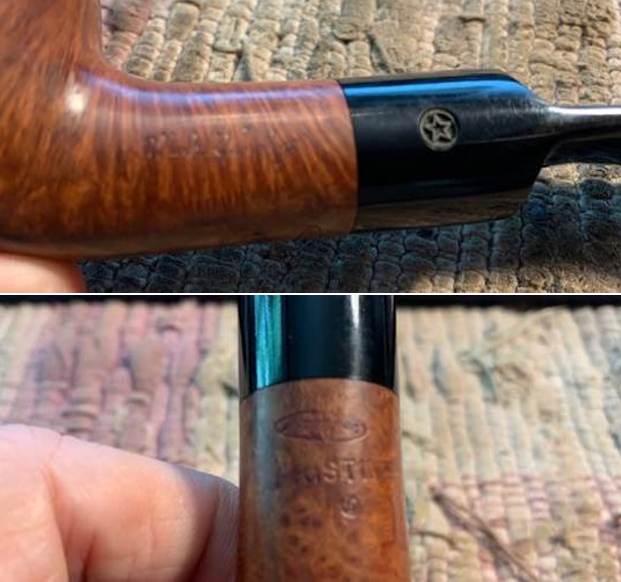 I removed the stem from the shank and took a photo of the pipe parts. It is quite a stunning piece.

I started my work on the pipe by reaming the bowl with a PipNet pipe reamer and took the cake back to bare walls. I cleaned up the reaming with a Savinelli Fitsall Pipe Knife. I sanded the bowl walls with 220 grit sandpaper wrapped around a piece of dowel. I examined the walls with a lens and they were solid and undamaged. 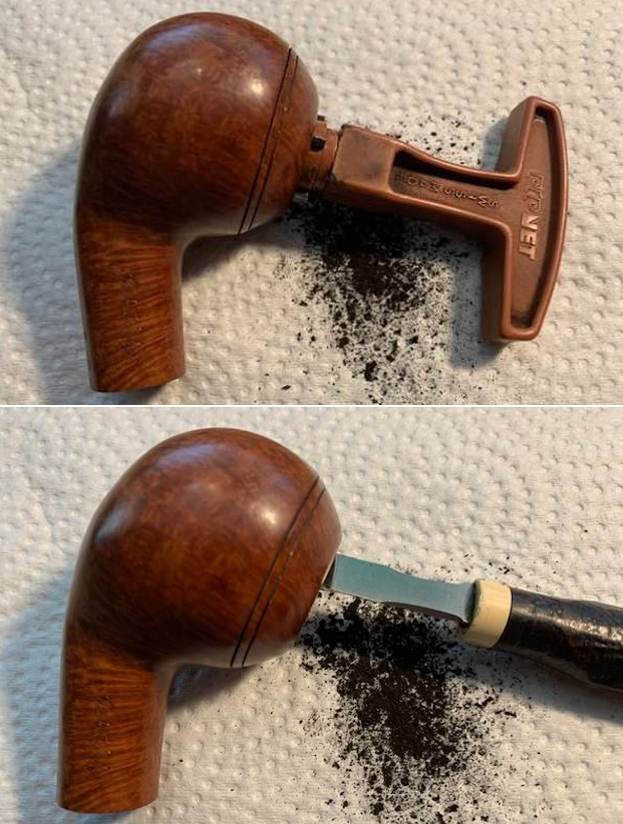 I worked over the darkening on the inside edge of the bowl and the rim top with a folded piece of 220 grit sandpaper. It began to look a lot better.

I used a butter knife, wet cloth and the flame of our gas stove to steam out the dent on the top right of the rim edge. I heated the knife with the flame on the stove and put the wet cloth on the dent. I touched the area of the dent with the hot knife. It came out easily and looks great. 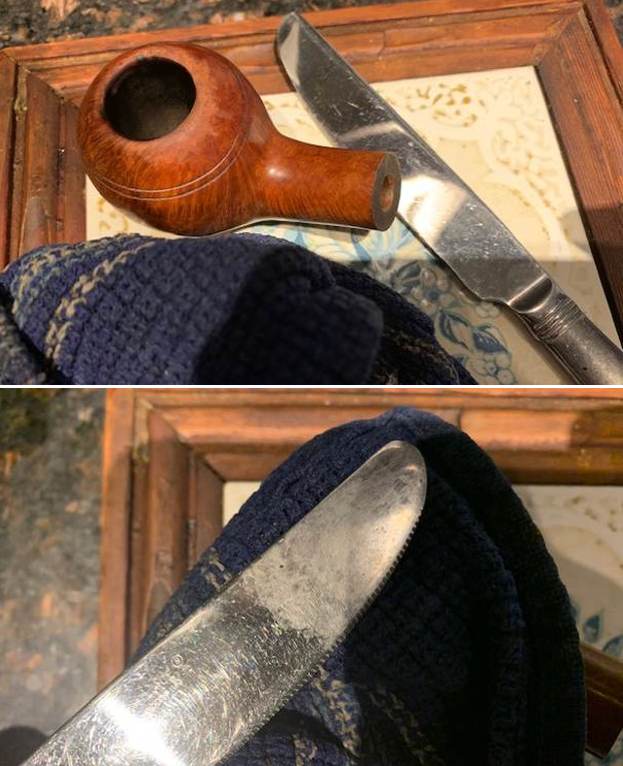 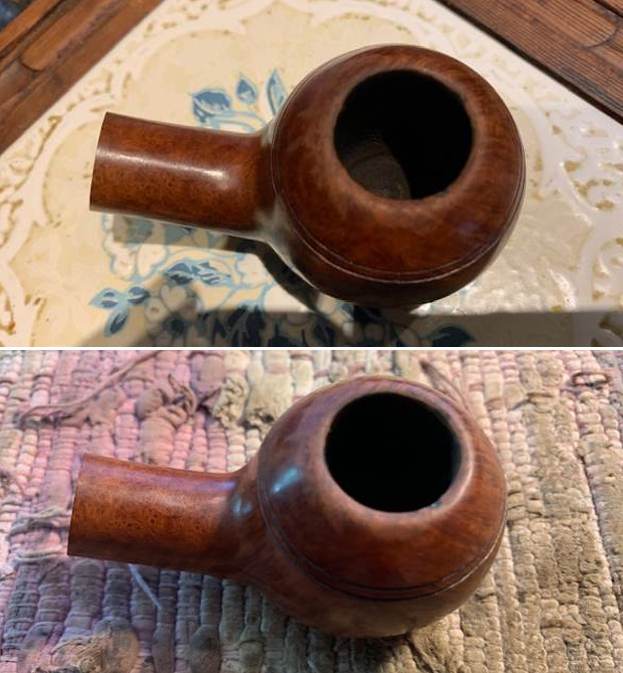 I cleaned out the airway in the shank and the stem as well as the mortise with isopropyl alcohol, cotton swabs and pipe cleaners. It was surprisingly quite clean.

I scrubbed the exterior of the bowl with Murphy’s Oil Soap and a tooth brush to remove the grime from the finish of the bowl and rim top. I rinsed off the bowl with warm water and then dried the bowl with a cotton cloth. The grain that came to the surface once it was clean is quite stunning. 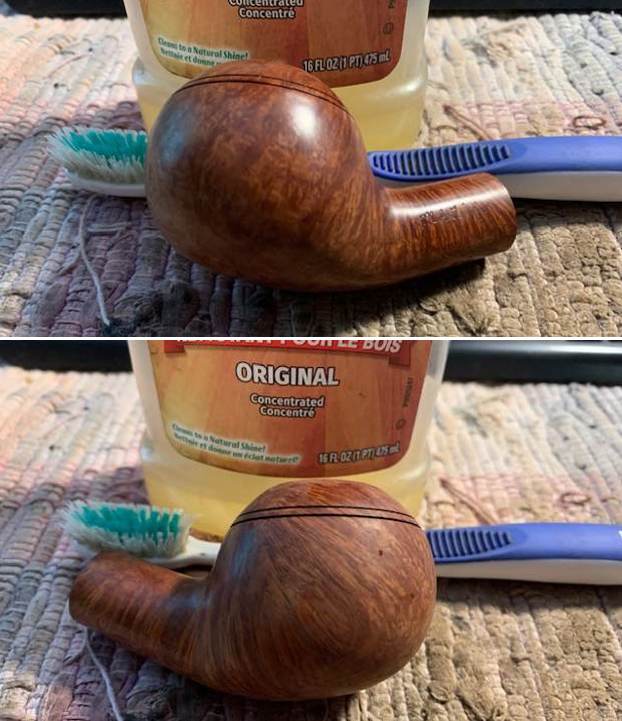 I polished the briar with micromesh sanding pads – dry sanding with 1500-12000 grit pads. After each pad I wiped the bowl down with a damp cloth to remove the sanding debris. It really took on a shine by the last three sanding pads. 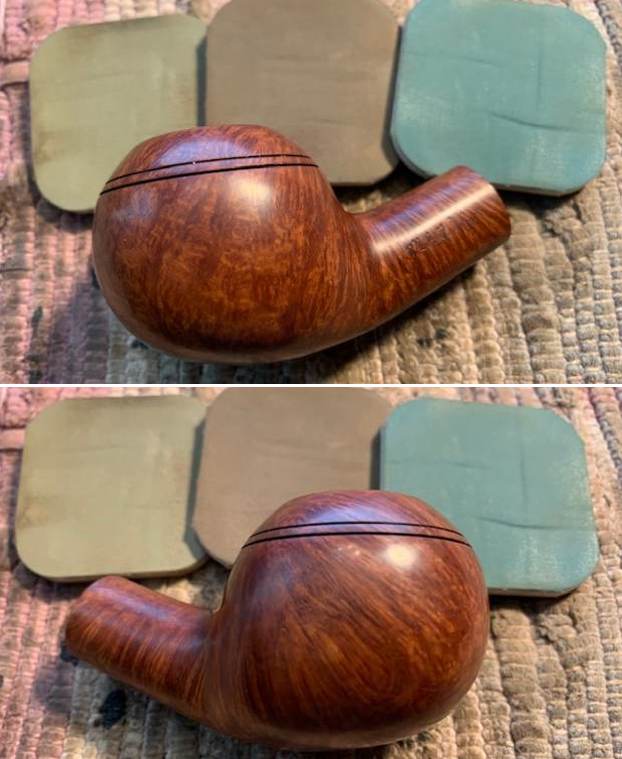 I rubbed the bowl down with Before & After Restoration Balm. I worked it into the surface of the briar with my fingertips and a shoe brush to get it in the grooves. It works to clean, restore and preserve the briar. I let it do its magic for 15 minutes then buffed it off with a cotton cloth. The pipe looks incredibly good at this point in the process. 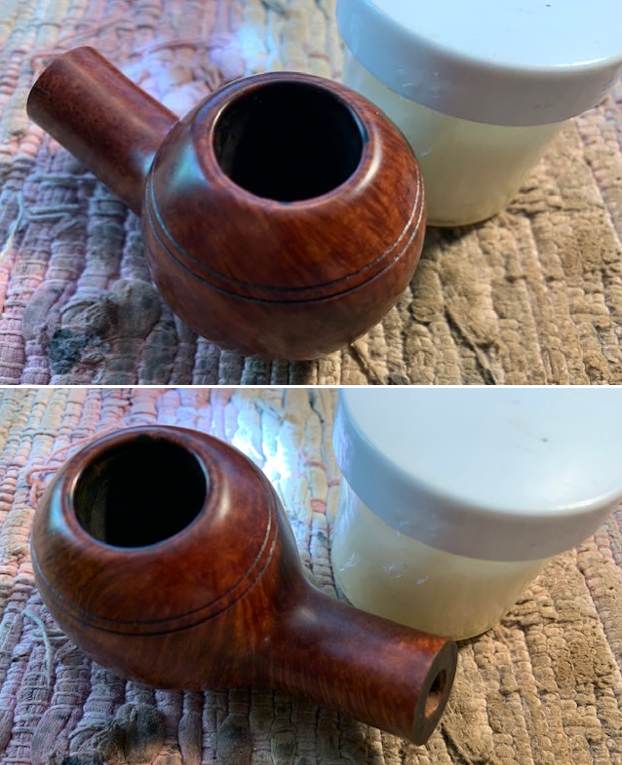 With that the bowl had come a long way from when I started working on it. I set it aside and turned my attention to the stem. I filled in the few deep tooth marks in the acrylic with clear CA glue. Once the repairs cured I sanded them smooth with 220 grit sandpaper and started polishing them with 400 grit wet dry sandpaper.

I am excited to finish this beautiful Mark Tinsky American Pristine Rhodesian size 5. I put the pipe back together and buffed it with Blue Diamond on the buffing wheel. I gave the bowl and the stem multiple coats of carnauba wax. I hand buffed the pipe with a clean buffing pad to raise the shine. It is fun to see what the polished bowl looks like with beautiful mixed grain all around it. The polished grain on the pipe looks great with the black acrlyic stem. This smooth Tinsky American Pristine Rhodesian is great looking and the pipe feels great in my hand. It is light and well balanced. Have a look at it with the photos below. The dimensions are Length: 5 ½ inches, Height: 1 ¾ inches, Outside diameter of the bowl: 1 ¾ inches, Chamber diameter: ¾ of an inch. The weight of the pipe is 72 grams/2.54 ounces. It turned out to be a beautiful pipe. I will be packing it up and sending it to my friend in Israel. I think he will enjoy this beauty once it is in his hands. Thanks for your time reading this blog and as Paresh says each time – Stay Safe. 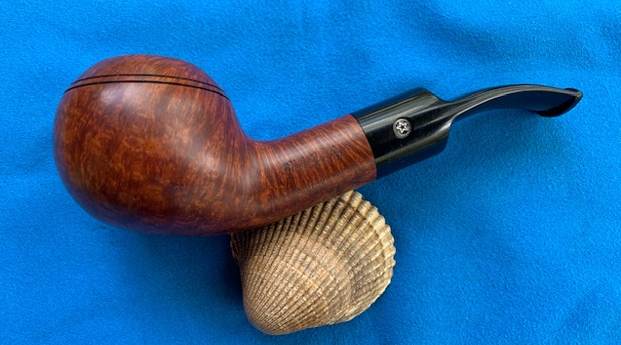 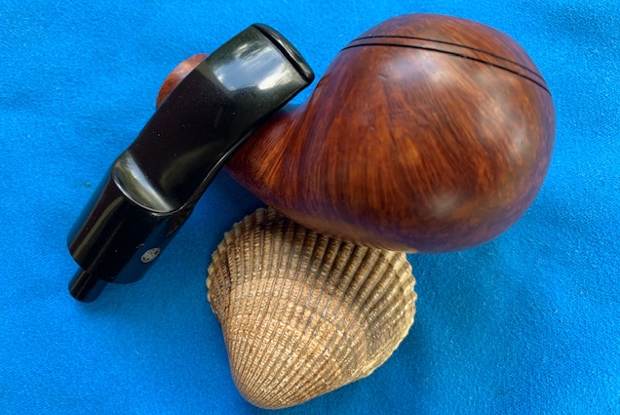 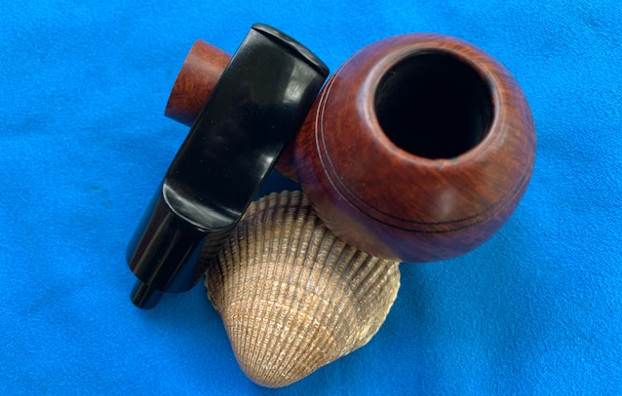 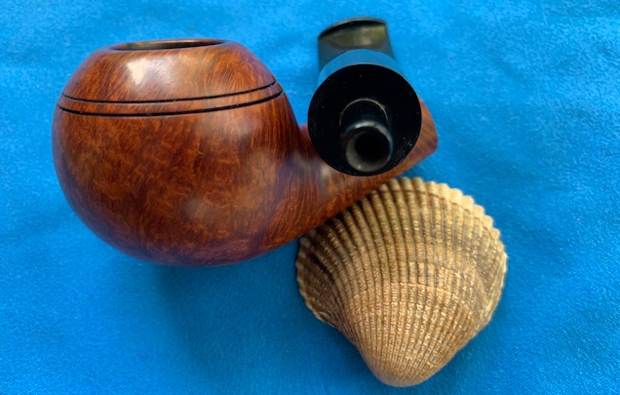