The next pipe on the work table came to us from an online auction on 04/04/19 from Wilkes Barre, Pennsylvania, USA. It is a nice looking Parker Super Bruyere Lovat with a saddle stem. The bowl has a rich reddish brown colour combination that highlights grain. It has been coated with varnish that is spotty and shiny. The pipe has some grime ground into the surface of the briar. This pipe is stamped on the sides of the shank. On the left it reads 63 followed by Parker [over] Super in a Diamond [over] Bruyere. On the right it read Made in London [over] England followed by a 4 in a circle that is the group size. The saddle stem has no marking. There is a thick cake in the bowl and some overflow of lava on the edges of the rim top. The rim top looks okay but the inner edge is damaged/burned on the front and back of the bowl. There were some light tooth marks and chatter on both sides of the vulcanite stem near the button. The pipe looks to good under the grime. Jeff took photos of the pipe before he started his cleanup.

He took photos of the rim top to show the cake and the lava coat. The inner edge of the bowl has some darkening and lava on the inner bevel. The top and outer edge also look okay. It is a dirty pipe but obviously one that was a great smoker. He also captured the condition of the stem. It is lightly oxidized, calcified in the groove of the button and has tooth marks and chatter on the top and underside of the stem near the button.

He took photos of the sides and heel of the bowl to show the beautiful grain around the bowl and the condition of the pipe. You can see the grime ground into the surface of the briar.

He took photos of the stamping on the side of the shank. They are clear and readable as noted above. The photos show the sides of the shank.

I turned first to Pipephil’s site to look at the Parker write up there and see if I could learn anything about the line (http://www.pipephil.eu/logos/en/logo-parker.html). There was a portion of the listing that was for Parker Super Bruyere Pipes. I have drawn a red box around the pipe that matches the stamping on the pipe.

From the above screen capture I learned that the pipe I was working on was a more recent Parker Super Bruyere without a date stamp.

I looked up the Parker brand on Pipedia to see if I could find the Parker’s Bruyere there or at least the possessive Parker’s stamping (https://pipedia.org/wiki/Parker).

Dating – Prior to Word War II, the possessive PARKER’S stamp was used. However, at least some pipes were stamped with the non-possessive as early as 1936.

Like Dunhill, Parker pipes are date stamped, but differently than Dunhill. The Parker date code always followed the MADE IN LONDON over ENGLAND stamping. The first year’s pipes (1923) had no date code; from 1924 on it ran consecutively from 1 to 19.

There is no indication of a date code for the war years. Parker was not a government approved pipe manufacturer, while Dunhill and Hardcastle were. During the war years Parker manufactured the “Wunup” pipe made of Bakelite and clay.

The pipe that I was working on was stamped Parker without the possessive stamping. As there are no date stamps on the pipe it either was made during the war years or shortly after. It is definitely a newer pipe.

It was time to work on the pipe. As usual Jeff had done a thorough cleanup on the pipe. He reamed the bowl with a PipNet pipe reamer and followed up with a Savinelli Fitsall pipe knife to remove the cake. He scrubbed out the mortise and the airway in the shank and the stem with alcohol, cotton swabs and pipe cleaners. He scrubbed the exterior of the bowl, rim, shank and stem with a tooth brush and Murphy’s Oil Soap to remove the oils and tars on the rim and the grime on the finish of the bowl. He rinsed it under running water. One of the benefits of this scrub is that it also tends to lift some of the scratches and nicks in the surface of the briar. He dried it off with a soft cloth. He cleaned the internals and externals of the stem with alcohol, pipe cleaners and cotton swabs. He soaked the stem in Before & After Deoxidizer and rinsed it off with warm water and cleaned out the airway in the stem with alcohol. The pipe looked very good when it arrived. Interestingly there was some spotty varnish on the bowl and part of the shank.

I took a photo of the rim top and stem to show the condition. The rim top shows a lot of damage to the inner edge. The bowl is out of round and the burn on the front extends onto the rim top. The vulcanite saddle stem had light tooth chatter and marks on both sides ahead of the button and on the button edges. 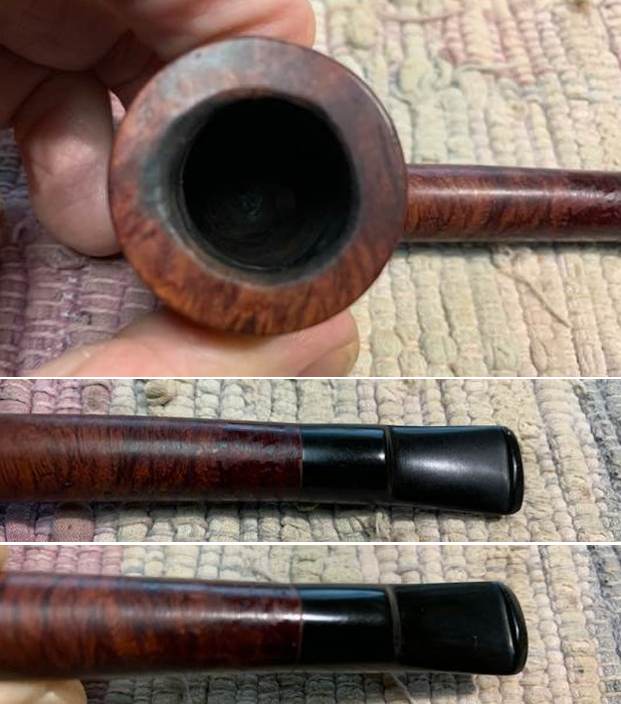 The stamping on the sides of the shank is clear and readable as noted above.

I removed the stem and the extension from the shank and took a photo of the pipe to give a sense of the whole. It is a nice looking Lovat that should clean up very well.

The first photo below shows the condition of the rim top and inner edge when I started reworking it. I reshaped the top and the bowl edges with a piece of sandpaper on a wooden ball. The ball and sandpaper helped clean up the beveled edge and blended in the burn and cuts in the briar as well as bring the bowl back into round. I used a folded piece of 220 grit sandpaper to further shape the bowl. 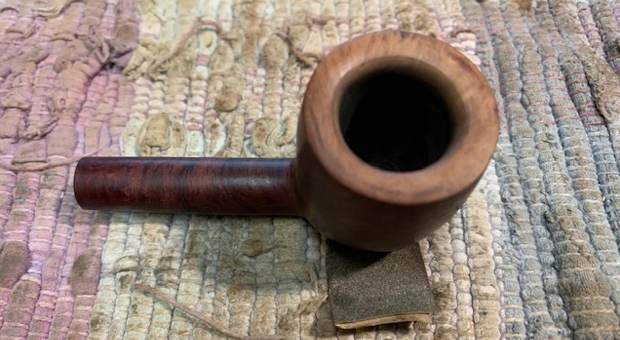 I polished the bowl and rim top with micromesh sanding pads – dry sanding with 1500-12000 grit pads and wiped down the bowl after each sanding pad. 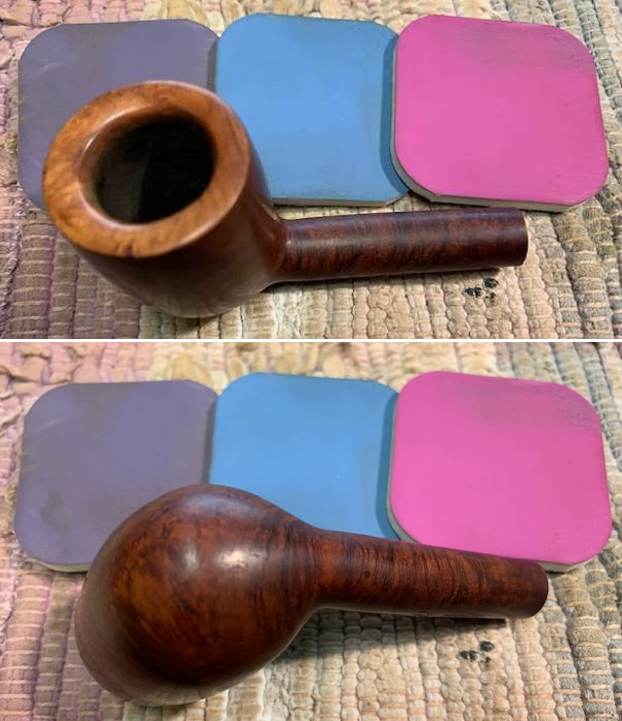 I used a Walnut and a Maple stain pen to blend the colours on the rim top to match the rest of the bowl and shank. Once the stain cures I will buff it out and it should be a good match.

I rubbed the bowl and shank down with Before & After Restoration Balm. I worked it into the surface of the bowl sides and shank with my fingertips to clean, enliven and protect the briar. I let the balm sit for a little while and then buffed with a cotton cloth to raise the shine. The Balm did its magic and the grain stood out. 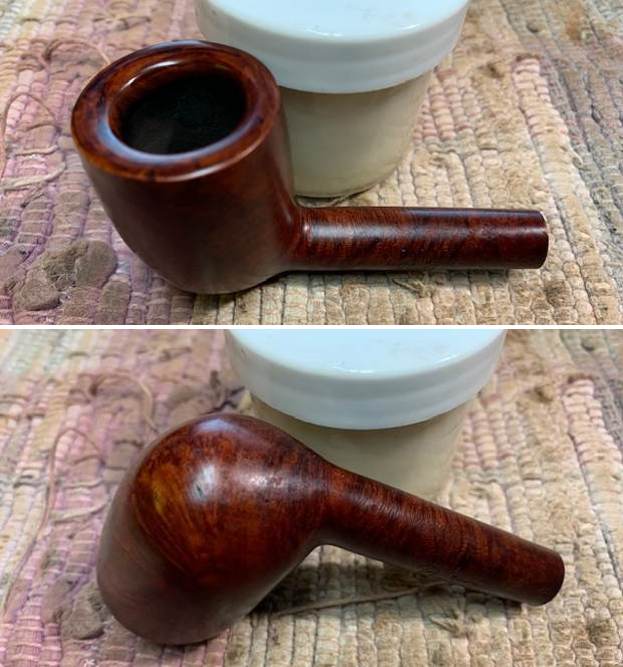 I set the bowl aside and turned my attention to the stem. The stem was in good condition and the light marks and chatter should polish out easily. I polished the stem with micromesh sanding pads – 1500-12000 grit pads. I wiped it down with Obsidian Oil after each sanding pad. I used Before & After Pipe Polish – both Fine and Extra Fine to further polish the stem. I gave it a final coat of Obsidian Oil and set it aside to dry.

This nicely grained Parker Super Bruyere 63 Lovat with a vulcanite saddle stem is a great looking pipe now that it has been restored. The briar around the bowl is clean and really came alive. The rich brown stains gave the grain a sense of depth with the polishing and waxing. The grain really popped. I put the vulcanite stem back on the bowl and carefully buffed the pipe with Blue Diamond on the buffing wheel using a light touch on the briar. I gave the bowl and the stem multiple coats of carnauba wax on the buffing wheel. I buffed the pipe with a clean buffing pad to raise the shine. I hand buffed the pipe with a microfiber cloth to deepen the shine. The finished Parker’s Lovat is a beauty and feels great in the hand and looks very good. Give the finished pipe a look in the photos below. The dimensions of the pipe are Length: 4 ½ inches, Height: 1 ¾ inches, Outside diameter of the bowl: 1 ¼ inches, Chamber diameter: ¾ of an inch. The weight of this large pipe is 1.16 ounces /33 grams. This Parker’s Super Bruyere Lovat is another great find our hunts. It is much more beautiful in person than these photos can capture. I will be putting it on the rebornpipes store soon. Look for it in the British Pipe Makers section. If you would like to add it to your collection let me know. This is another pipe that has the possibility of transporting the pipe man or woman back to a slower paced time in history where you can enjoy a respite. Thanks for walking through the restoration with me. 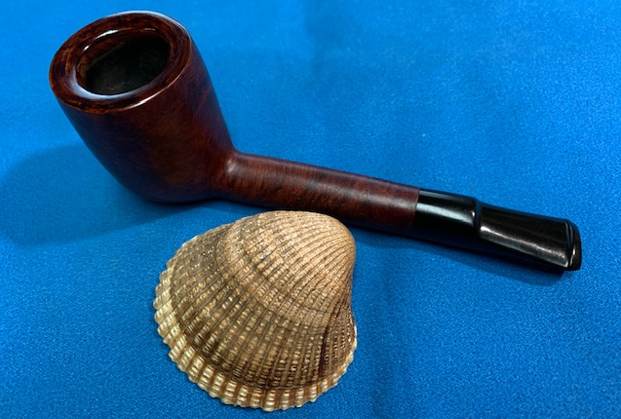 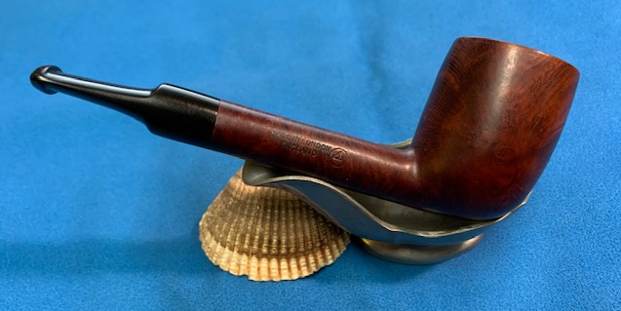 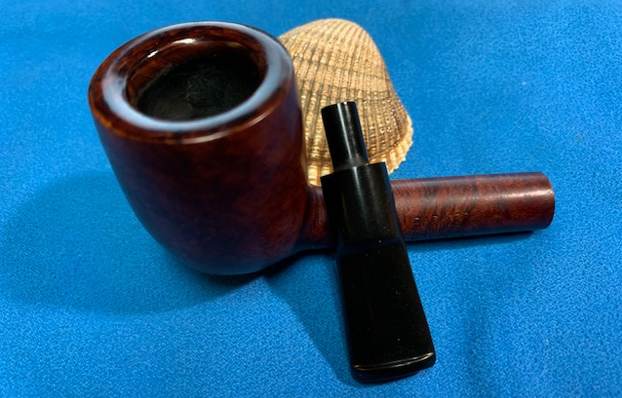