The next pipe has been sitting here for almost three years. I have picked it up and looked at quite a few times and always set it back down for another day. Today is finally the day. It is a nice 05 Calabash from Peterson of Dublin. It is a Limited Edition 2015 St. Patrick’s Day Pipe. It came with the box, slip cover and green pipe bag. We bought it in 2018 knowing that it had some issues. The biggest was that the right side of the bowl and shank had faded to almost a green wash while the rest of the pipe was fully green. A second issue always stopped me was that the pipe had been dipped in a thick coat of urethane or at least varnish. I would have to remove it if I was to restain the pipe. The stem had a decaying rubber softee bit on it and we all know those can hide anything from tooth marks to bite-throughs and we would not be sure until it was in our hands and we removed it. Jeff took photos of the pipe before he cleaned it up. 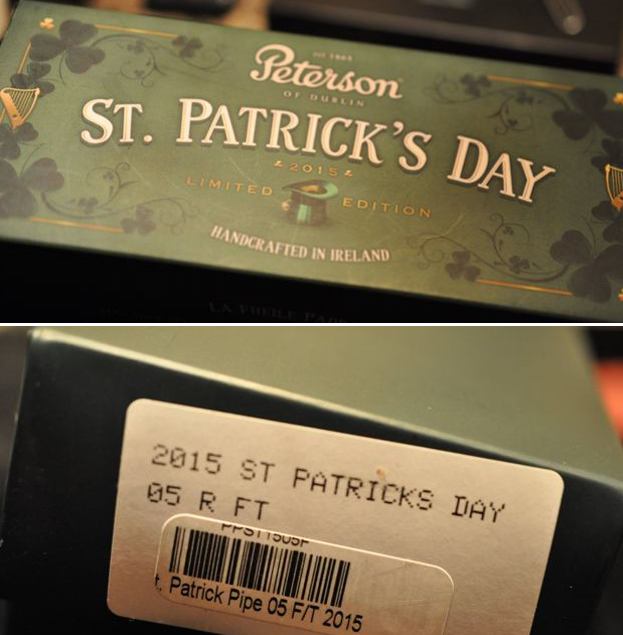 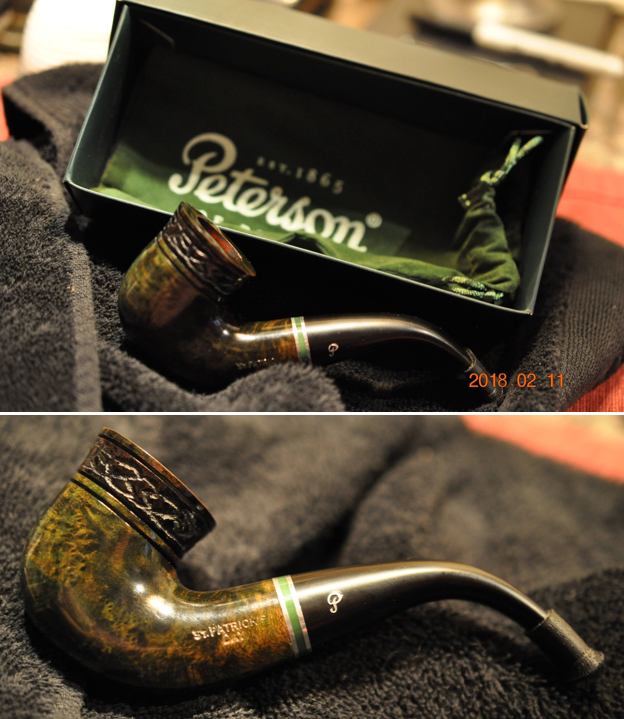 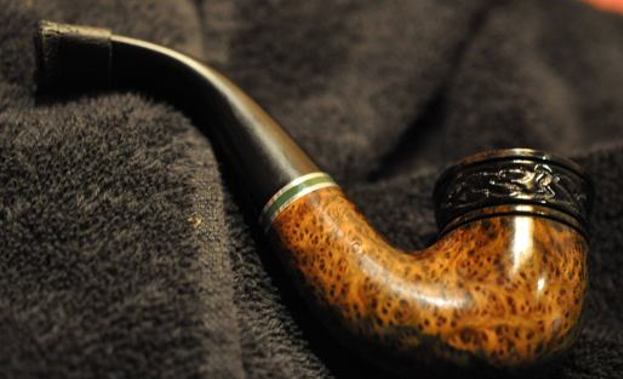 Jeff took a photo of the rim top and bowl to show its condition. It is faded and washed out looking as much as the rest of the pipe. However it is also well smoked. The previous owner had smoked it but was careful with the rim edges and top – no burn damage or poor reaming. Those are redeeming features. He also took photos of the stem with the Softee bit in place and removed. Another redeeming feature was that underneath it was quite clean and undamaged. I let out a big WHEW once I saw that as it is a major amount of work avoided in stem repair.

He took photos of the sides and heel of the bowl to show the condition of the stain and the briar underneath. It is an interesting looking pipe. 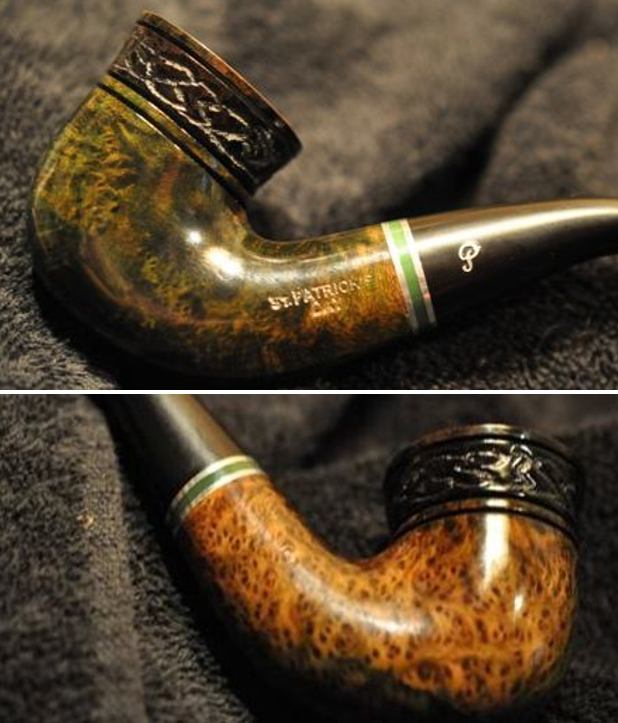 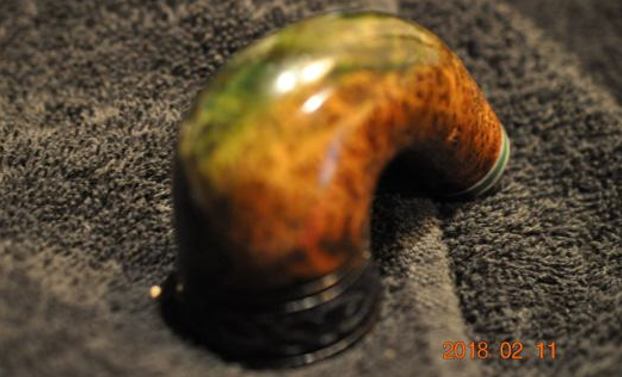 He took a photo of the stamping on the left side of the shank and you can see the thick urethane coat almost filling in the stamping. It is readable but it is also awful with the plastic coating on it.

To be honest with all of you I am not a big fan of coloured pipes to begin with so this really is a hard one for me. I also really have no idea what the pipe must have looked like before the sun fading and thick urethane coat. Maybe it would be better? I was not sure so I decided to pause my work for a little longer and see what I could find out about the original 2015 St. Patrick’s Day pipe.

I Googled and found a site that had a decent description of the pipe. I could almost picture it from the words. It was a shop called Mission Pipe. You have to answer the age questions to get in but here is the link (https://www.missionpipe.com/peterson-2015-st-patrick-s-day-pipe). They had a photo but it was not that clear. I quote their description below.

Google next took me to Mark Irwin’s Peterson Pipe Notes site. His description was spot on and the photos showed me what I needed to know (https://petersonpipenotes.wordpress.com/tag/dr-jekyll-and-mr-hyde/). I quote below. I have also included a photo of the shape 05 that I have.

I now knew what I was aiming for with the pipe in question. First the removal of the urethane then a restain with this objective in front of me. A carved Celtic Knot black band around the top edge of the bowl and then a very green stain that matched the green between the polished silver in the band on the shank end.

Jeff had cleaned up the pipe as he normally does. He reamed it with a Pipnet Reamer and cleaned up the reaming with a Savinelli Fitsall Pipeknife. He scrubbed out the inside of the airway in the shank and stem with alcohol, pipe cleaners and cotton swabs. He scrubbed the exterior of the bowl with undiluted Murphy’s Oil Soap to see if he could break down the plastic coat. Unfortunately it did absolutely nothing to that finish. He removed the Softee Bit and scrubbed the stem with Soft Scrubb. He soaked it in Before & After Deoxidizer. He rinsed it off and recleaned it. I took the following pictures when it arrived. That shiny coat kills me! 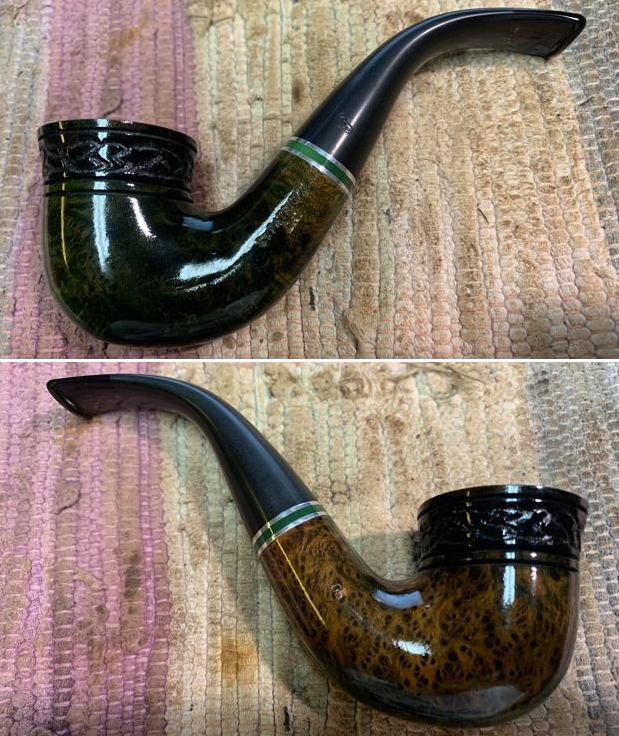 I took photos of the rim top and the stem to show the condition of them both. The rim top is blotchy green in colour and the finish is not smooth. The heavy urethane coat is not smooth on the top. The stem looks very good and other than very light chatter it is in excellent condition.

I took photos of the stamping on the shank sides. It is clear and readable but you can also see the high gloss shine of the urethane on the bowl in these photos. It is really quite thick. 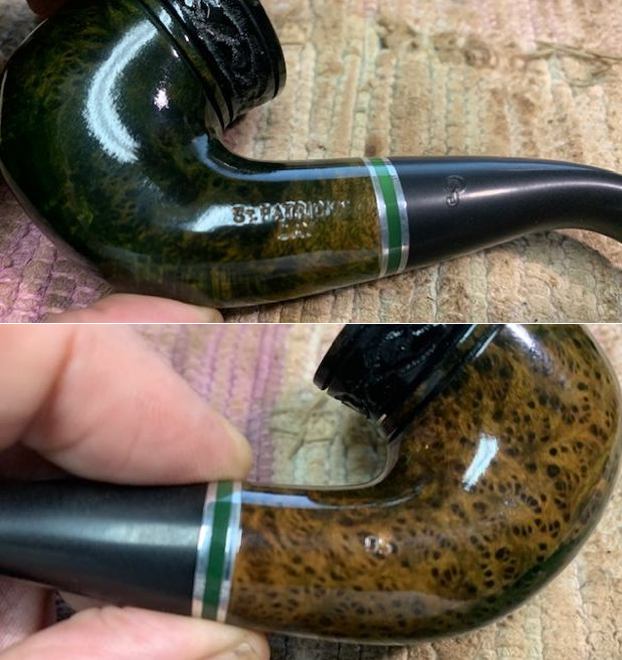 I took a photo of the bowl and stem separated to give a sense of the pipe but also to highlight the urethane coat the predominates the finish on this once beautiful pipe.

Now it was time to try and strip the urethane coat off the bowl so I could restain it. It was going to be a lot of work. I sanded the bowl with 1500 grit micromesh sanding pads and also a medium and a fine sanding block to try and break up the urethane seal. I sanded for a while then wiped the bowl down with acetone. Eventually I was able to break through the urethane coat on the bowl sides and rim top. It sounds simple but I spent probably 3-4 hours sanding and wiping the bowl down with acetone to finally break through the plastic… a foul and loathsome thing!!

With the finish finally removed I stained the Celtic Knot carving around the top of the bowl with a Black stain pen as it was in the original. The black looks very good at this point in the process. 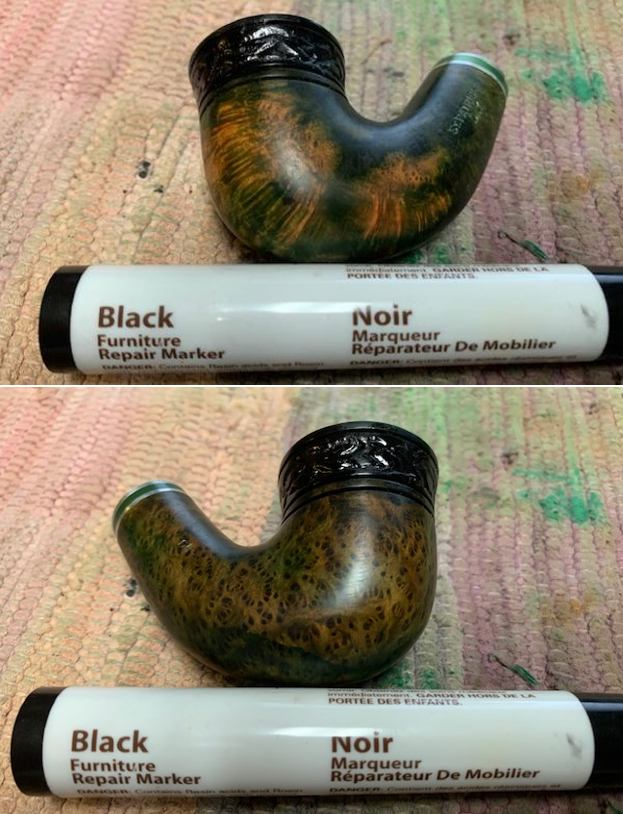 With that finished it was time to stain the bowl with the green stain. I chose a green stain that matched the green ring in the shank band. It is a Fiebing’s Kelly Green. I applied it with the wool dauber that came with the stain and flamed it to set it in the briar. The flame burns off the excess alcohol and opens the pores in the briar to let the colour into the grain. I repeated the process until I was happy with the coverage around the bowl. 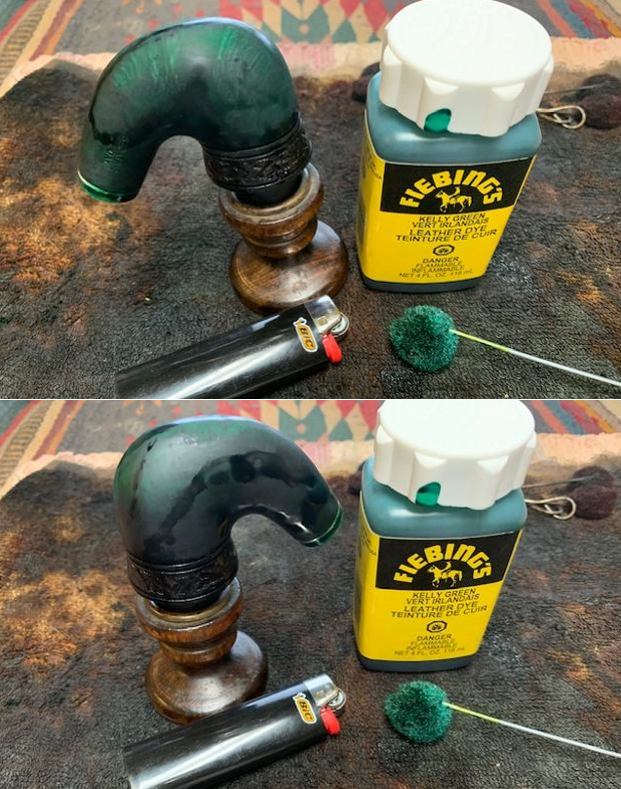 I set the bowl aside to cure and took a break on the front porch for a couple of hours. Before I called it a night I took the cork from the bowl and took photos of the newly stained bowl.

I set aside the bowl to let the stain cure before going further with it. I turned my attention to the stem. I repainted the P stamp on the left side with some white acrylic nail polish. I brush it on and scrape of the excess with a fingernail. I lightly sanded it with a 1500 micromesh sanding pad and wiped it down with Obsidian Oil.

I polished the stem with micromesh sanding pads – dry sanding with 1500-12000 grit pads and wiping it down after each pad with Obsidian Oil. I finished polishing it with Before & After Fine and Extra Fine polish. I gave it a final coat of Obsidian Oil and set it aside to dry. 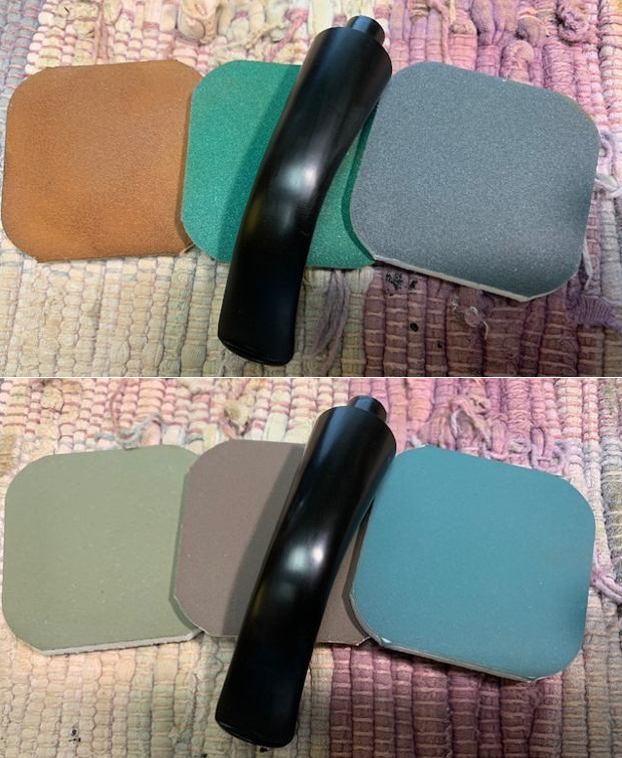 This Peterson of Dublin St. Patrick’s Day 2015 shape 05 Calabash is a great looking pipe now that it has been restored. The Kelly Green stained finish around the bowl is quite beautiful and highlights grain very well. It also matches the green in the shank band. The finish works well with the polished vulcanite taper stem. I put the stem back on the bowl and carefully buffed the pipe with Blue Diamond on the buffing wheel using a light touch on the briar. I gave the bowl and the stem multiple coats of carnauba wax on the buffing wheel and followed that by buffing the entire pipe with a clean buffing pad. I hand buffed the pipe with a microfiber cloth to deepen the shine. (In taking the photos I can see that I need to do a heavier buff on the bowl and will do so after the finish cures a day or two.) The finished St. Patrick’s Day 2015 Bent Calabash sits nicely in the hand and feels great. Give the finished pipe a look in the photos below. The dimensions of the pipe are Length: 5 ¼ inches, Height: 1 ¾ inches, Outside diameter of the bowl: 1 ½ inches, Chamber diameter: ¾ inch. The weight of the pipe is 48 grams/1.69 ounces. I will be putting it on the rebornpipes store shortly. If you are interested in adding this pipe to your collection send me a message or an email. Thanks for reading this blog and my reflections on the pipe while I worked on it. There are many more to come! 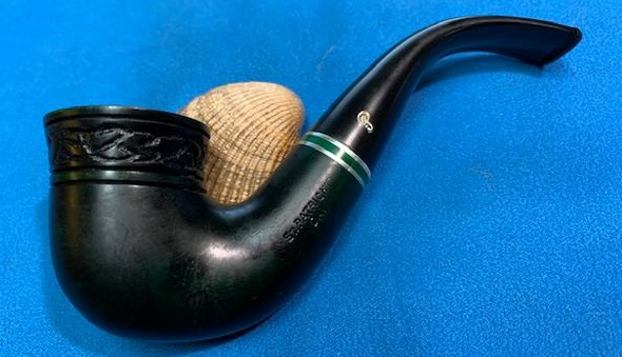 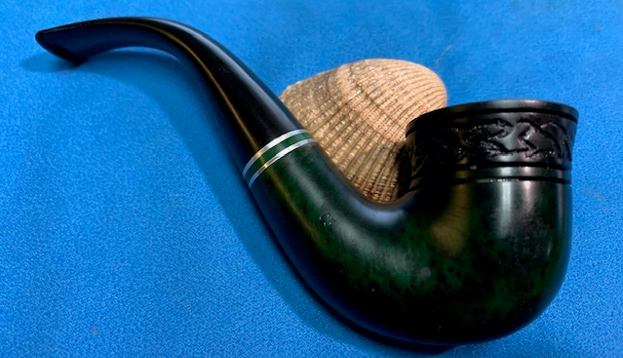 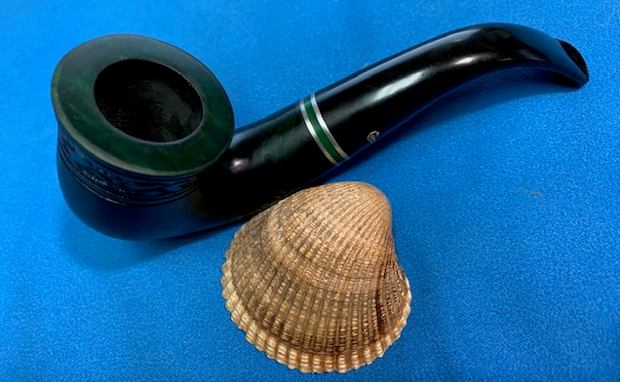 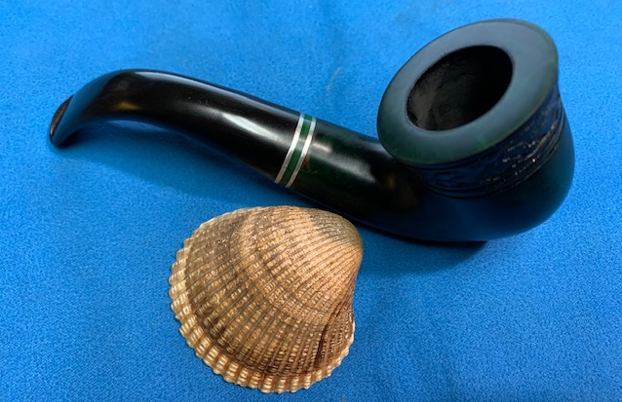 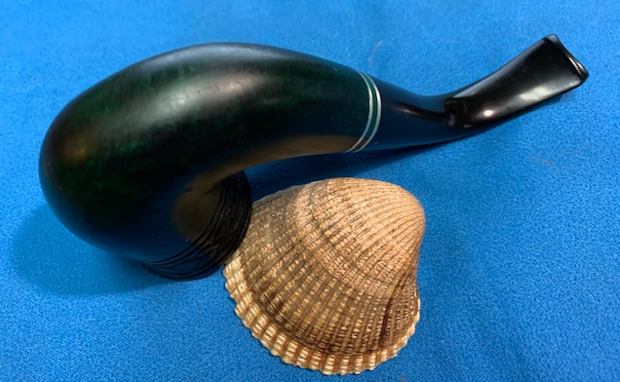 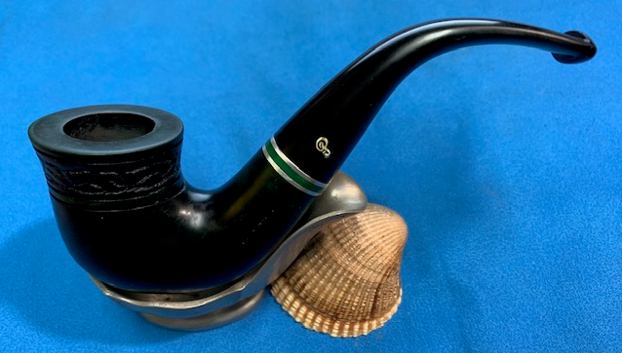 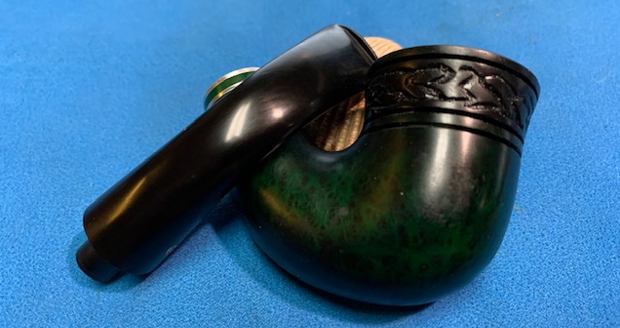 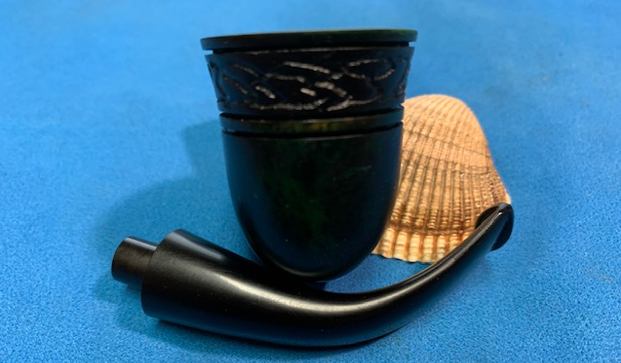 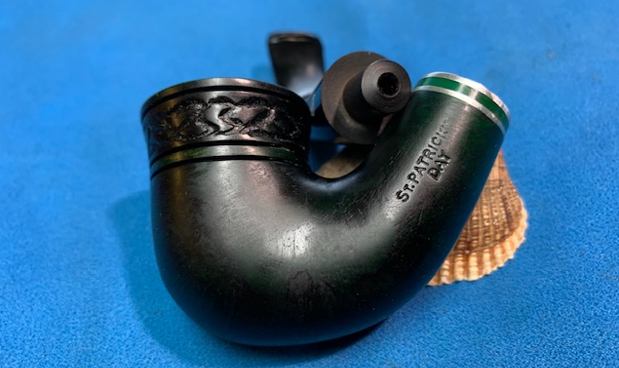