The next pipe that I chose to work on is an interesting looking short pipe that Jeff and I picked up this pipe in 2019 from an antique mall in Airdrie, Alberta. We finally got around to cleaning it up a year later and restoring it two years later. That is what happens when you have a lot of pipes to work on around you every day. It has a flat bottom making it a sitter. It also was flattened on the front of the bowl which allows the smoker to stand it on the front as well. The pipe was stamped on the flat front of the bowl and reads Optimal [over] Butz-Choquin [over] des.J. Colombo. On the heel of the bowl it is stamped: Selection [over] 122 [over] Made in France [over] Modele Depose [over] No.154221. The finish was dirty and tired looking but had some great grain poking through the grime. The bowl had a thick cake inside and a lava overflow on the rim edges and top. The vulcanite shank extension was oxidized and the glue anchoring it to the shank end had dried and it come loose. It had a white bar inlay going horizontally across the top.  The short, stubby vulcanite saddle stem was oxidized and had tooth marks and chatter on both sides near the button. Jeff took photos of the pipe before his cleanup.

He took photos of the rim top to show the condition of the top and edges of the bowl. The thick cake in the bowl, the lava on the rim top and the wear on the edges are visible. The stem had light tooth marks and chatter on both sides ahead of the button. 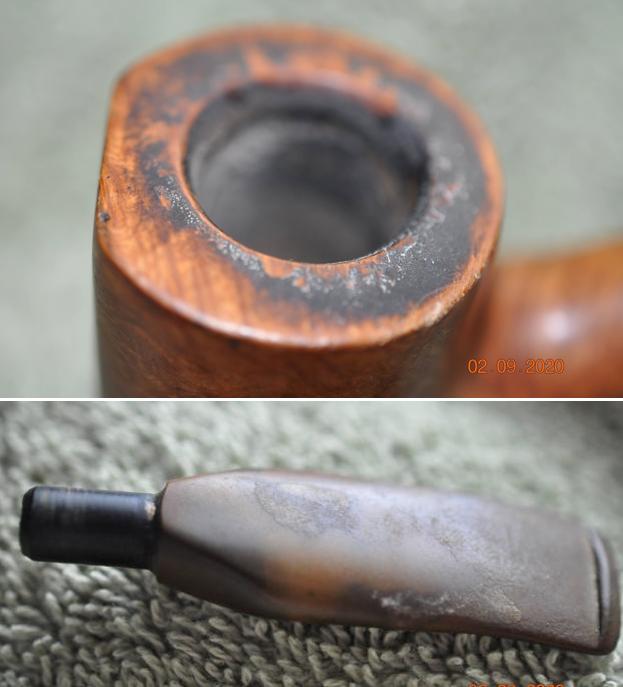 He took photos of the sides and heel of the bowl to show the grain around the bowl and the condition of the pipe. It is a very unique looking pipe.

He took photos of the stamping on the front and heel of the bowl. It is clear and readable as noted above. 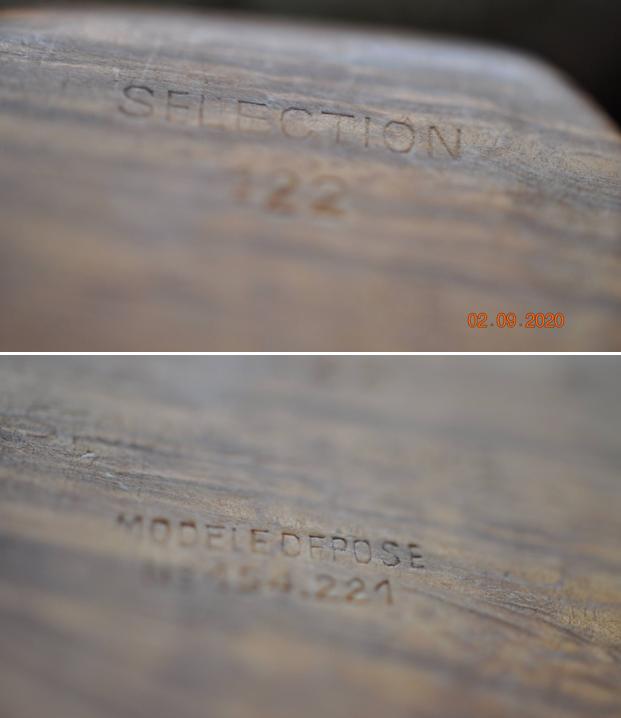 I turned first to Pipephil’s site to have a look at what was listed there and did a screen capture of the section (http://www.pipephil.eu/logos/en/logo-butzchoquin.html). 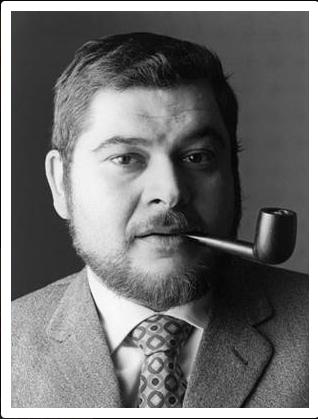 In the side bar of the listing on the Optimal I found that pipes that were stamped like the one I was working on with des. J. Colomo dated from the 1960s and were designed by Joe Colombo. There was a photo of the designer on the site that gave an good look at the designer. It was a nice plus to be able to connect the stamping to the man who had designed the pipe.

I turned to Pipedia (https://pipedia.org/wiki/Butz-Choquin) to see what I could learn. I found a great read on the history of the brand but nothing on the specific Optimal brand.

I knew that I was dealing with a pipe that was designed by Joe Colombo and was made in the 1960s. He had designed some unique looking pipes and I was fortunate to be working on this unusual sitter. Knowing that I had a new appreciation for the brand and it was time to work on the pipe itself.

As usual Jeff had done a thorough cleanup on the pipe. He reamed the bowl with a PipNet pipe reamer and followed up with a Savinelli Fitsall pipe knife to remove the cake. He scrubbed out the mortise and the airway in the shank and the stem with alcohol, cotton swabs and pipe cleaners. He scrubbed the exterior of the bowl, rim, shank and stem with a tooth brush and Murphy’s Oil Soap to remove the oils and tars on the rim and the grime on the finish of the bowl. He rinsed it under running water. One of the benefits of this scrub is that it also tends to lift some of the scratches and nicks in the surface of the briar. He dried it off with a soft cloth. He cleaned the internals and externals of the stem with alcohol, pipe cleaners and cotton swabs. He soaked the stem in Briarville’s Pipe Stem Deoxidizer and rinsed it off with warm water and cleaned out the airway in the stem with alcohol. When I received it the pipe looked very good. 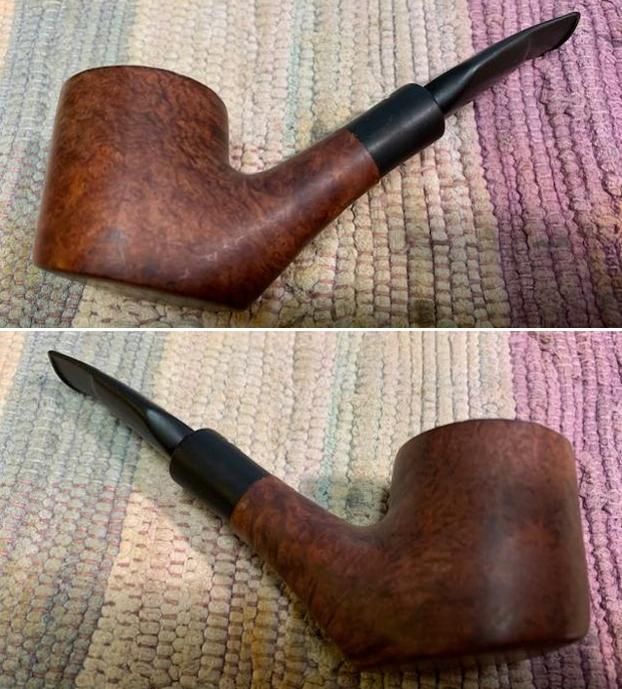 I took a photo of the rim top and stem to show the condition. The rim top and the inner edge of the bowl were in good condition. There were some nicks on the inner edge of the bowl and some nicks in the rim top but otherwise it looked good. The shank extension was loose and would need to be reglued. The stem was vulcanite and there were some tooth marks and chatter on both sides ahead of the button. 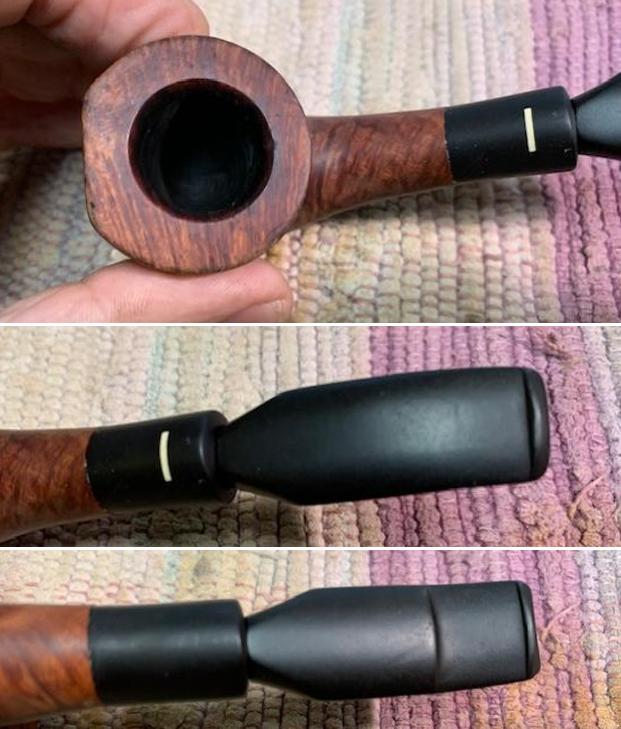 The stamping on the front of the bowl and the heel are clear and readable as noted above.

I removed the stem from the shank and took a photo of the pipe to give a sense of the whole. It is a unique looking Canadian and I am looking forward to seeing what I can do with it.

During their separation the shank somehow was slightly larger in diameter than the extension. It was not a huge difference but it was bothersome to me. I sanded shank and the extension to remove the excess on the shank itself. I used a folded piece of 220 to smooth out the transition. It took a bit of work but it was finally suitable.

I worked over the damage on the rim top and on the inside of the rim edge with a folded piece of 220 grit sandpaper. With a bit of effort the rim top and edge were in good order. 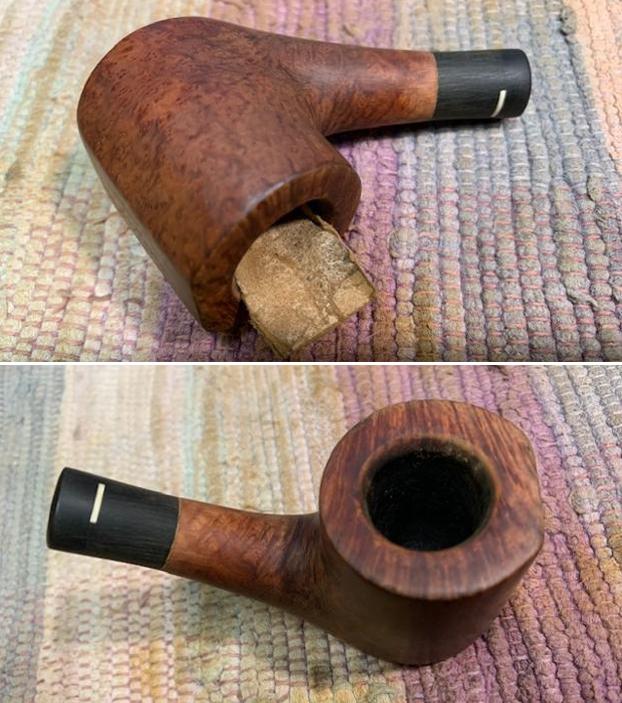 I sanded the bowl and vulcanite shank extension with micromesh sanding pads, dry sanding with 1500-12000 grit sanding pads and wiping it down with damp cloth after each sanding pad. As I worked through the cycle of pads the shine developed with each change of pad. The pipe looks very good.

I rubbed the bowl and shank down with Before & After Restoration Balm. I worked it into the surface of the bowl sides and shank with my fingertips to clean, enliven and protect the briar. I rubbed it into the vulcanite shank extension to we what it would do. I let the balm sit for 10 minutes, then buffed with a cotton cloth to raise the shine. The Balm did its magic and the grain stood out on the briar and the vulcanite shank extension took on a rich shine.

I set the bowl aside and turned my attention to the stem. I heated the stem with the flame of a lighter until the vulcanite softened. Once it was soft I bent it so that it was like the bend in the one in the photo from Pipephil’s site. 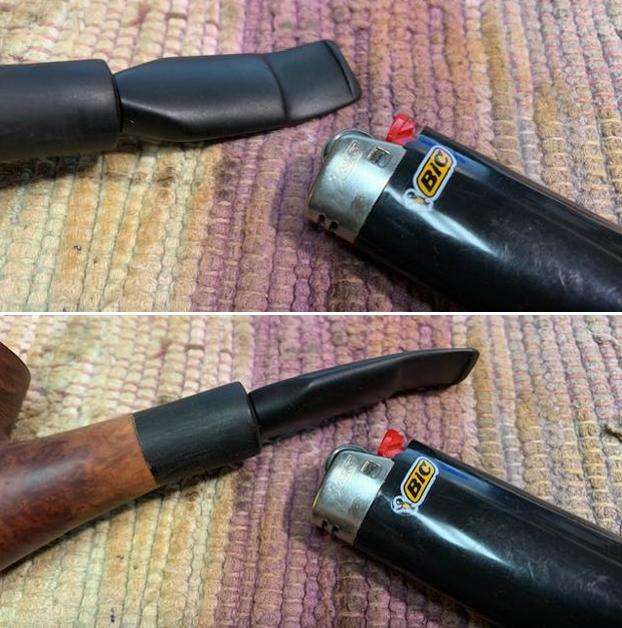 I sanded the stem surface with 220 grit sandpaper blend in the tooth marks and scratches into the surrounding surface of the stem and started polishing the stem with 400 grit wet dry sandpaper.

I polished the stem with micromesh sanding pads – 1500-12000 grit pads. I wiped it down with Obsidian Oil after each sanding pad. I used Before & After Pipe Polish – both Fine and Extra Fine to further polish the stem. The photos below show the polished stem. 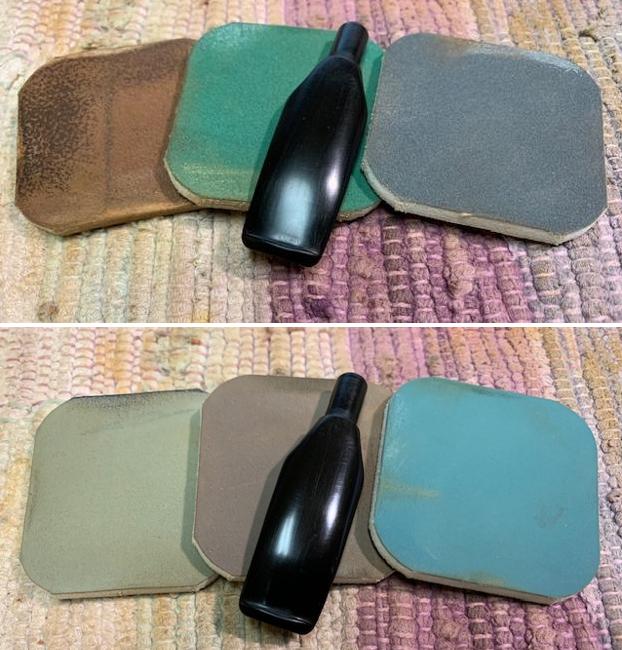 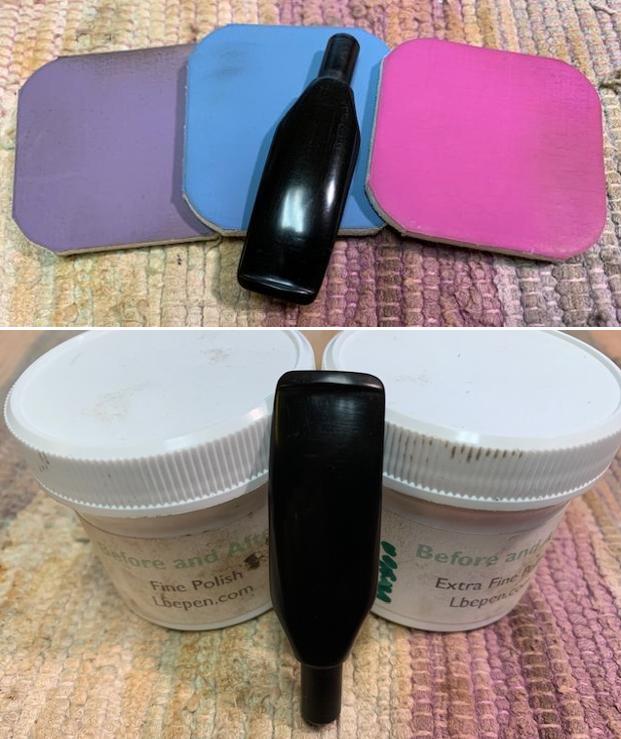 This smooth finished Butz-Choquin Optimal Selection 122 Sitter designed by Joe Columbo with a flat heel and flat bowl front on which it could be laid or stood on a flat top. The rich medium brown finish looked amazing and with the polishing it really came alive with buffing and waxing. I put the stem back in the shank extension on the bowl and carefully buffed the pipe with Blue Diamond on the buffing wheel using a light touch on the briar. I gave the bowl and the stem multiple coats of carnauba wax on the buffing wheel. I buffed the pipe with a clean buffing pad to raise the shine. I hand buffed the pipe with a microfiber cloth to deepen the shine. The finished Butz-Choquin Optimal Sitter is a beauty and feels great in the hand and looks very good. Give the finished pipe a look in the photos below. The dimensions of the pipe are Length: 5 inches, Height: 1 ¾ inches, Outside diameter of the bowl: 1 ½ inches, Chamber diameter: ¾ of an inch.The weight of the pipe is 2.12 ounces/60 grams. This pipe will soon be on the French Pipe Makers section of the rebornpipes store if you are interested in adding it to your rack. Thanks for reading this blog and my reflections on the pipe while I worked on it. There are many more to come! 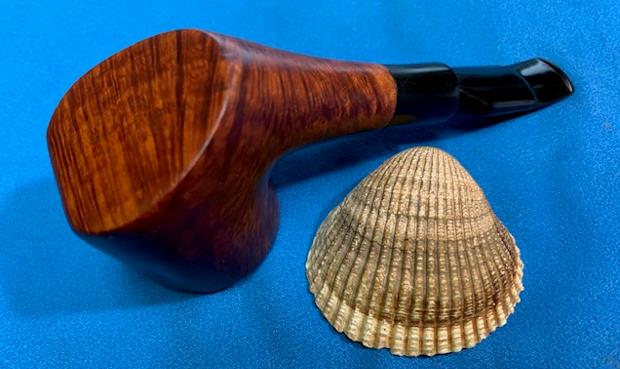 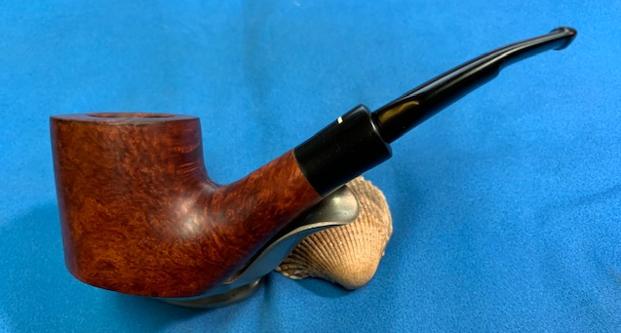 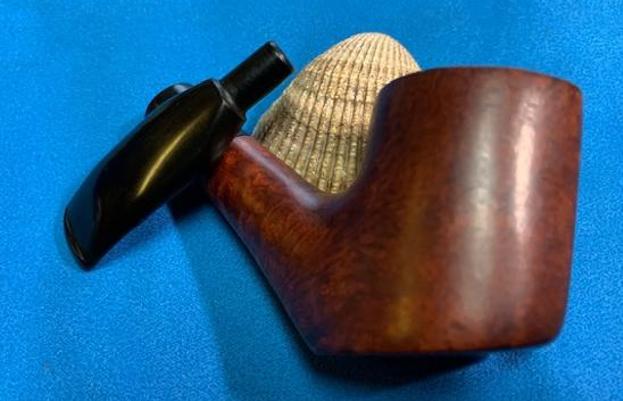 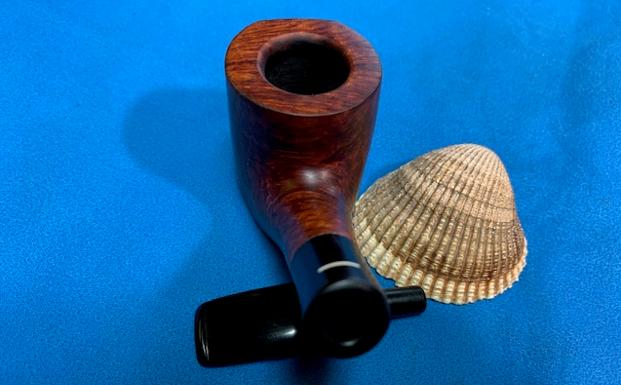