The next pipe I have chosen is another smooth finished Peterson’s pipe. This one is a smooth 999 Rhodesian that has a rich coloured finish around the bowl sides and shank. It came to us from an auction in Garden City, Missouri, USA. The finish is dark and dirty but there is some great grain around the bowl sides and cap. There is some road rash around the rings on the left side and right front of the bowl. It was stamped on the  left side of the shank and read Peteron’s [over] Dublin & London. It was stamped to the right of the shank and read MADE IN IRELAND in two lines with the shape number 999 next to the bowl. It was filthy when Jeff brought it to the table. There was a thick cake in the bowl and a thick overflow of lava on the rim top and the inner edge of the bowl. It was hard to know what the condition of the rim top and bowl were under that thick lava coat. The “P” stamp on the stem was visible but faint. The stem was oxidized, calcified and had tooth marks and chatter on the top and underside on and near the button. Jeff took photos of the pipe before his cleanup work.

Jeff took photos of the rim top and stem to show the general condition of the pipe. The bowl is heavily caked and the rim top and edges have some lava overflow. The stem is oxidized and has tooth marks on the top and underside near the button.

Jeff took photos of the bowl sides and heel to show the grain that was around this bowl. It is a nice looking pipe. There is some damage to the twin rings and cap edges on both sides of the bowl. On the left it is the full side and on the right it is toward the front of the bowl. 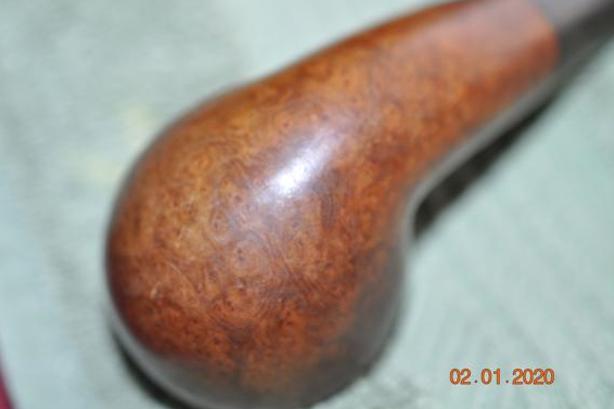 Jeff took a closeup photo of the damage on the sides of the bowl around the cap. It looks like the bowl has been dropped several times on a hard surface. 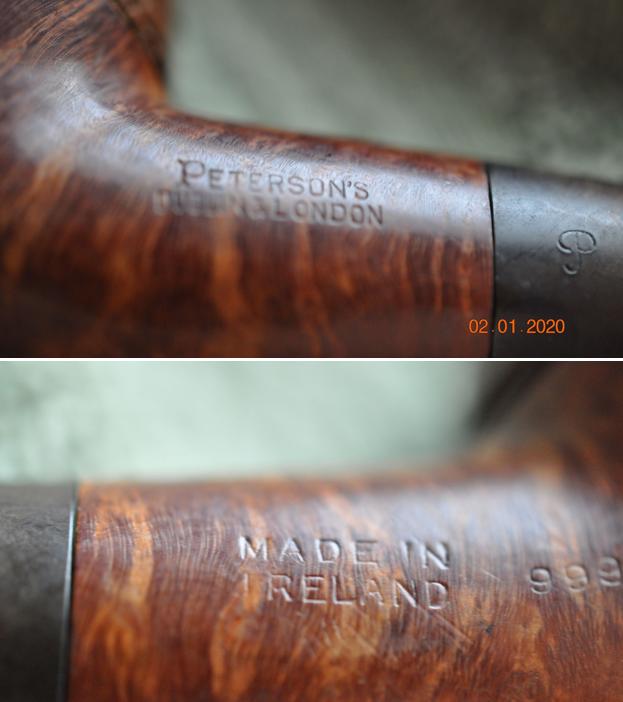 I turned to “The Peterson Pipe” by Mark Irwin and Gary Malmberg to get some background on the Peterson’s Dublin & London Pipe. On page 298 it had the following information.

Judging from the description above, the pipe I am working on is stamped with the stamp noted in red above. It reads Made in Ireland which narrows the date to between approximately 1940-1980. It was also one of the highest quality lines available by Peterson when it was made. Now it was time to work on the pipe.

Jeff had done a great job cleaning up the pipe as usual. He reamed the pipe with a PipNet reamer and cut back the cake back to the bare briar. He cleaned up the walls with a Savinelli Fitsall Pipe Knife. He scrubbed the interior of the bowl and shank with pipe cleaners, cotton swabs and alcohol to remove the tars and oils. He scrubbed the exterior of the pipe with Murphy’s Oil Soap and a tooth brush to remove the grime from the finish. He worked on the rim top lava and darkening with the soap and tooth brush. He scrubbed the inside of the stem with alcohol and pipe cleaners. He scrubbed the exterior with Soft Scrub and then soaked it in Briarville’s Deoxidizer. (We are using a new product for us to compare it with the Before & After Deoxidizer.) He washed it off with warm water to remove the deoxidizer. The pipe looked far better when it arrived. 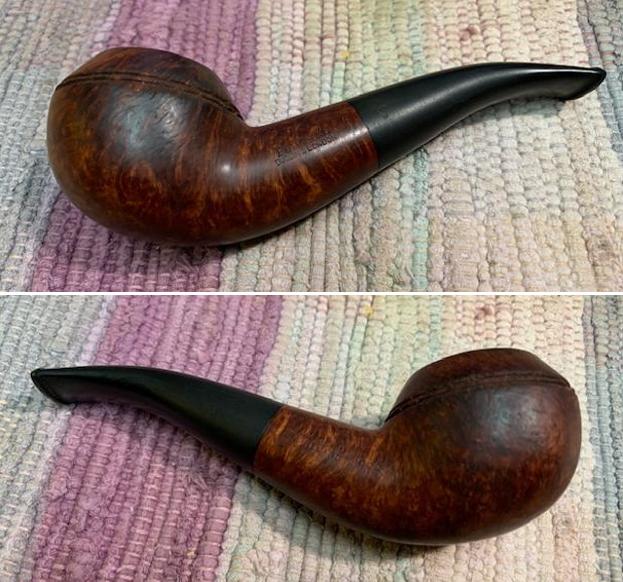 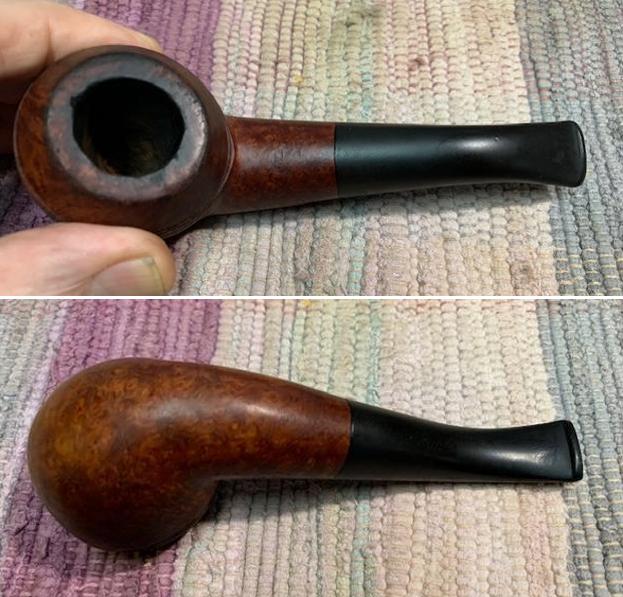 Next I turned to the road rash around the side of the ring and the cap. It had been roughened and pitted. I sanded it smooth with 220 grit sandpaper to remove the damage and rework the twin rings and edges on both sides of the ring (above & below). I followed that by sanding it with 400 grit wet dry sandpaper to further smooth out the lines of the twin rings. It is far from perfect but it is looking much better. 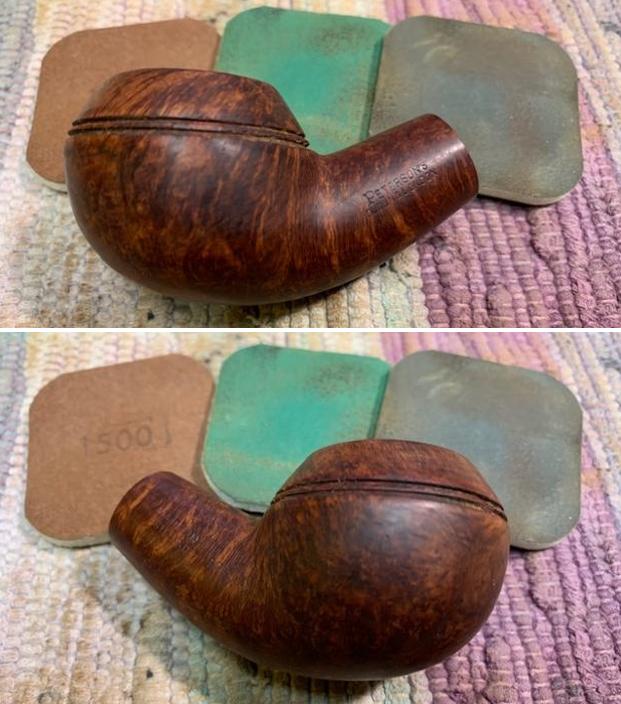 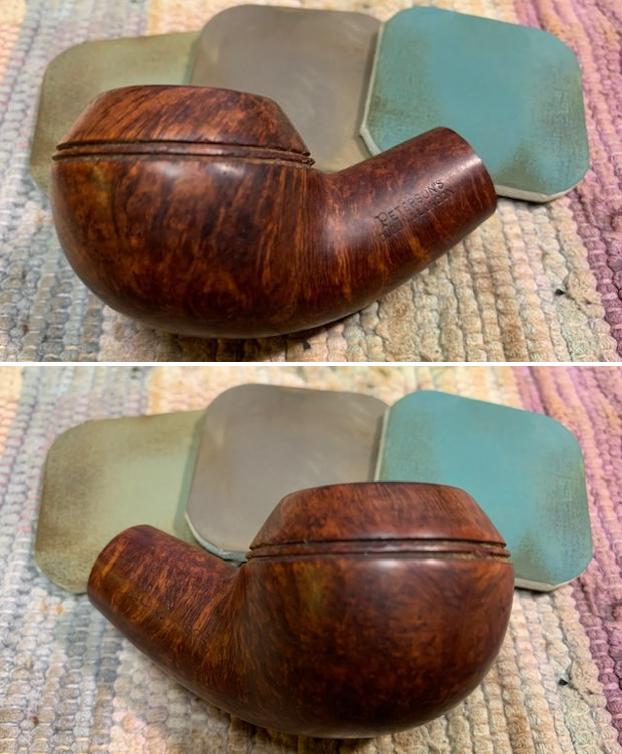 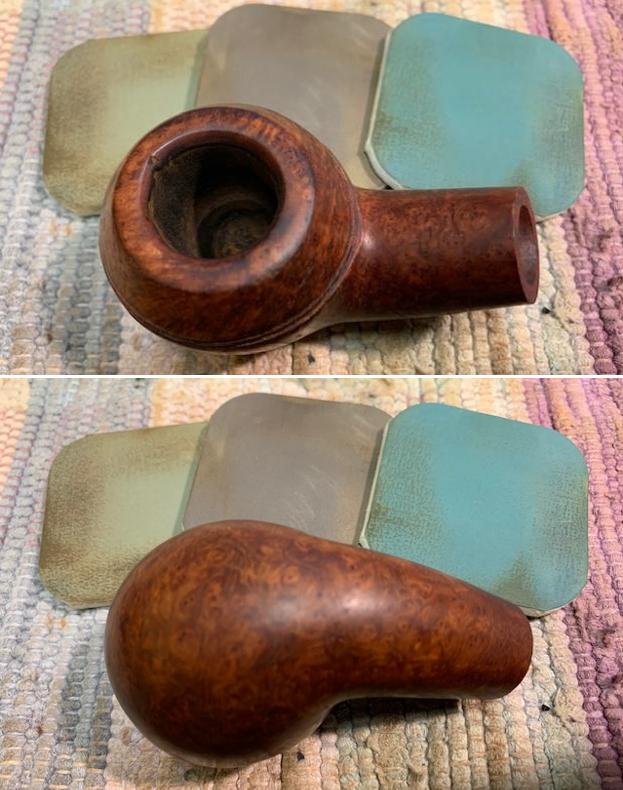 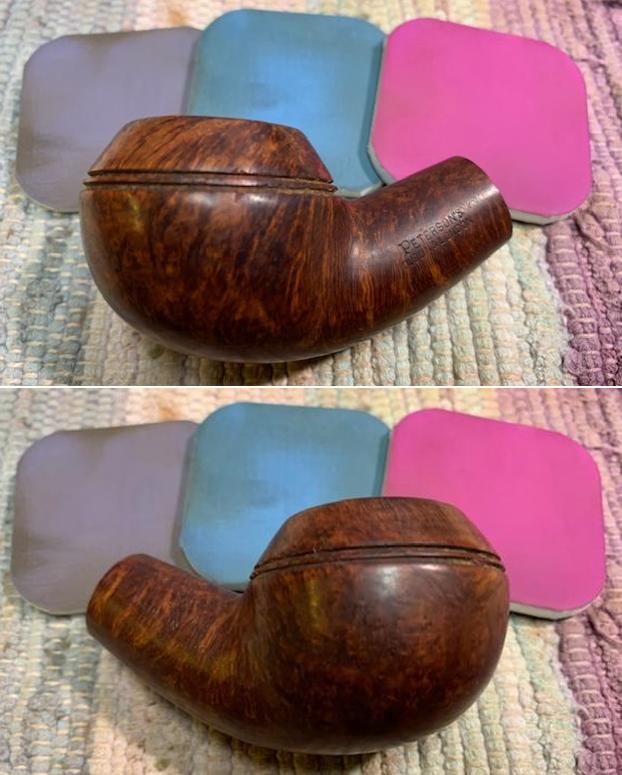 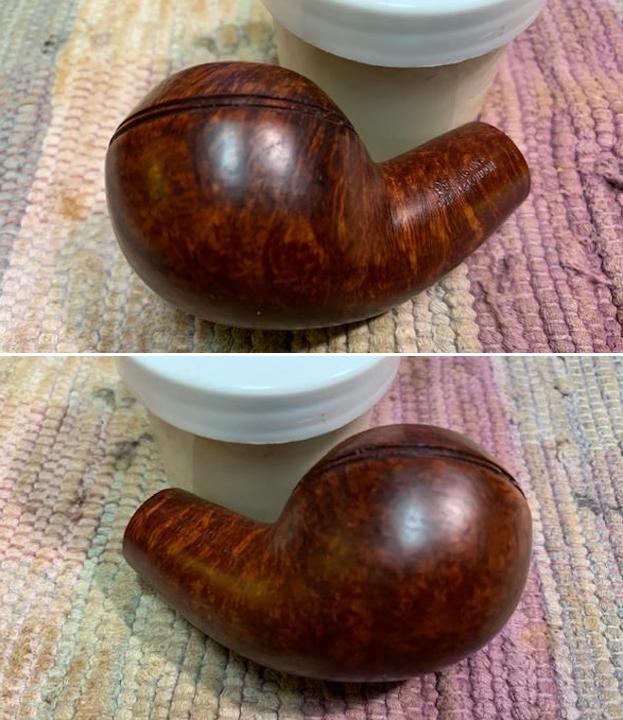 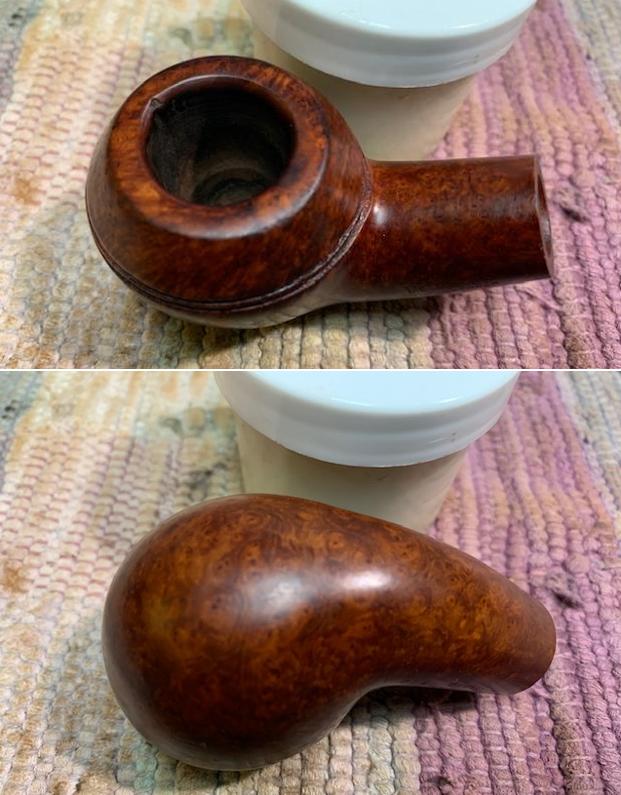 I set the bowl aside and turned my attention to the stem. I “painted” the tooth marks with the flame of a lighter to lift them. I was able to lift most of them. Those that remained I filled I with clear CA glue. Once the glue cured I sanded it with 220 grit sandpaper to blend them into the stem surface. I started polishing it with 400 grit wet dry sandpaper.

I touched up the P on the left side of the stem with Paper Make Liquid Paper. I rubbed it on and worked it into the P with a tooth pick. I rubbed it off with a soft cloth. It is quite readable. 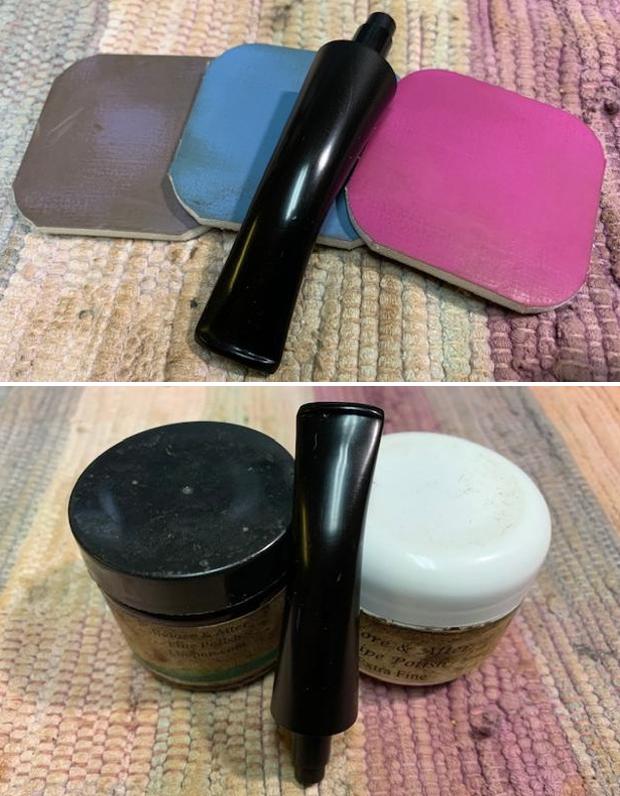 I am excited to finish this Peterson’s London & Dublin Made in Ireland 999 Rhodesian. I put the pipe back together and buffed it with Blue Diamond on the buffing wheel. I gave the bowl and the stem multiple coats of carnauba wax. I hand buffed the pipe with a clean buffing pad to raise the shine. It is fun to see what the polished bowl looks like with beautiful straight and flame grain all around it. Added to that the polished nickle band and the black vulcanite stem was beautiful. This smooth Classic London & Dublin Higher Grade 999 Rhodesian is great looking and the pipe feels great in my hand. It is light and well balanced. Have a look at it with the photos below. The dimensions are Length: 5 ½ inches, Height: 1 ½ inches, Outside diameter of the bowl: 1 ¼ inches, Chamber diameter: ¾ of an inch. The weight of the pipe is 55grams/1.94oz. It is a beautiful pipe and one that is already sold, or as Dal calls it “commissioned”. The gentleman who asked for it has the first right of refusal. Thanks for walking through the restoration with me as I worked over this pipe. Thanks to each of you who are reading this blog. 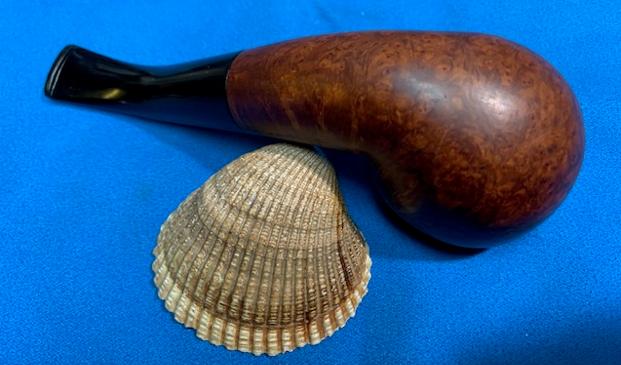 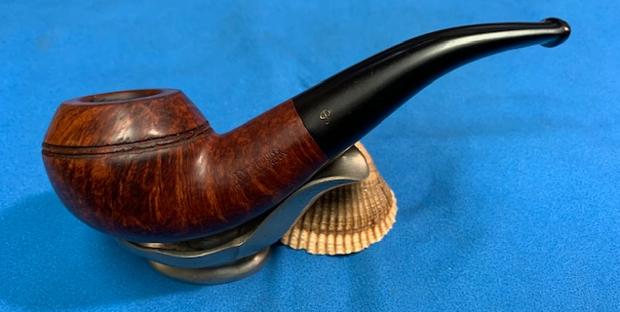 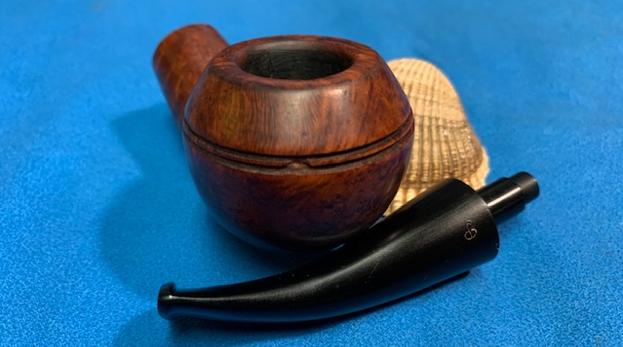