This Dunhill Panel Billiard was one of five other Billiards that came to us in the same lot as the 1922 Dunhill Bruyere Reading Pipe, a cracked shank 1962 Dunhill Shell Briar Pot and the 1905 BBB Calabash Reading Pipe and 1911 BBB Glokar Poker. I have drawn a red box around the pipe in the picture to the left. It is an interesting square shank Panel billiard. The pipe is stamped on the left side of the shank DUNHILL [over] LONDON. On the right side of the shank it was stamped “INNER TUBE [over] PAT. NO 116989/178 that is followed by the shape number EK7.

It was another filthy pipe with a thick cake in the bowl and a heavy lava overflow on the rim top. The finish was tired and dirty with grime and debris stuck to the surface of the briar. The stem has a small white dot on top and the button on the topside had a deep tooth mark and damage. There was tooth chatter and marks on both sides ahead of the button. Jeff took photos of the pipe before he did his clean up work.

He took photos of the bowl and rim to give a picture of the thickness of the cake and lava on the rim top. This must have been a favourite pipe to have that thick of a cake and lava buildup. The stem had a chip out of the button on the topside and tooth chatter and marks on both sides. It was a square stem that looked very good with the pipe. 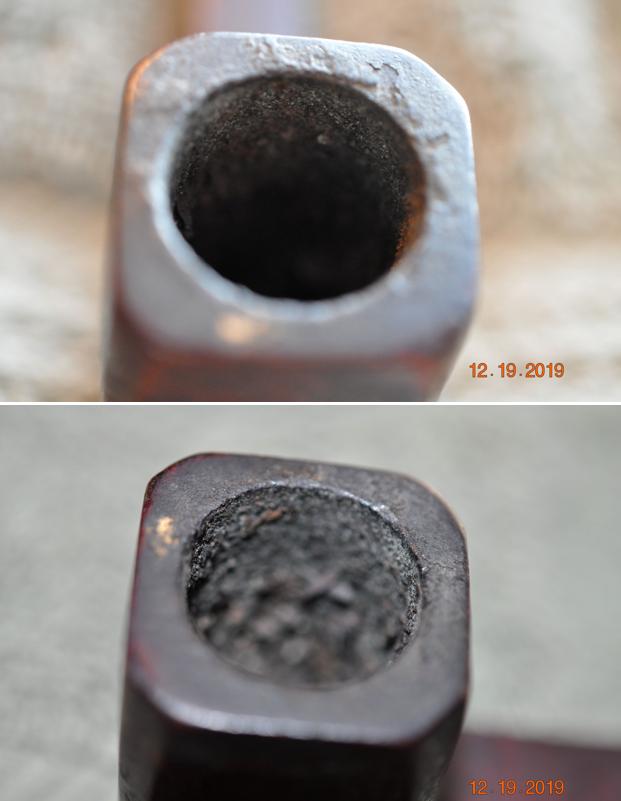 Jeff took photos of the bowl from various angles to give a sense of the dirtiness of the finish but also the unique shape of the panel billiard. It is going to be a real beauty! 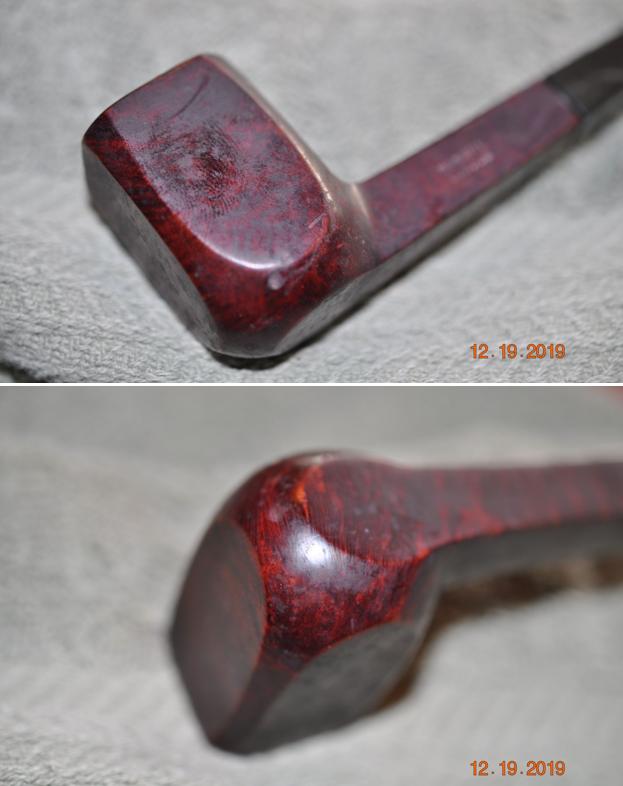 Jeff took photos of the stamping on the sides of the shank . There are some faint spots but over all it is readable as noted above.

I looked up what the Reg. No. stamp meant in John Loring’s The Dunhill Briar Pipe – The Patent Year and After, pg. 42. I quote the pertinent section below.

Prior to the war the bottom of the Dunhill black vulcanite bit had a “REG. No 654638” stamped (without color) on thee underside of the bit near the meeting point with the shank. I have yet been able to determine what the number refers to but I am fairly certain it is not to the White Spot trade mark since the stamping has been consistently found on pipe bits dating back to the 1918 while the White Spot trademark stamp was not awarded until 1922.

The original finish produced (usually made using Calabrian briar), and a big part of developing and marketing the brand. It was the only finish from 1910 until 1917. A dark reddish-brown stain. Before the 1950s, there were three possible finishes for Dunhill pipes. The Bruyere was a smooth finish with a deep red stain, obtained through two coats, a brown understain followed by a deep red.

There was a link on the above site to a section specifically written regarding the Bruyere finish (https://pipedia.org/wiki/Dunhill_Bruyere). I turned there and have included the information from that short article below.

There was also a link to a catalogue page that gave examples and dates that the various finishes were introduced (https://pipedia.org/wiki/File:Dunnypipescatalog-1.png). 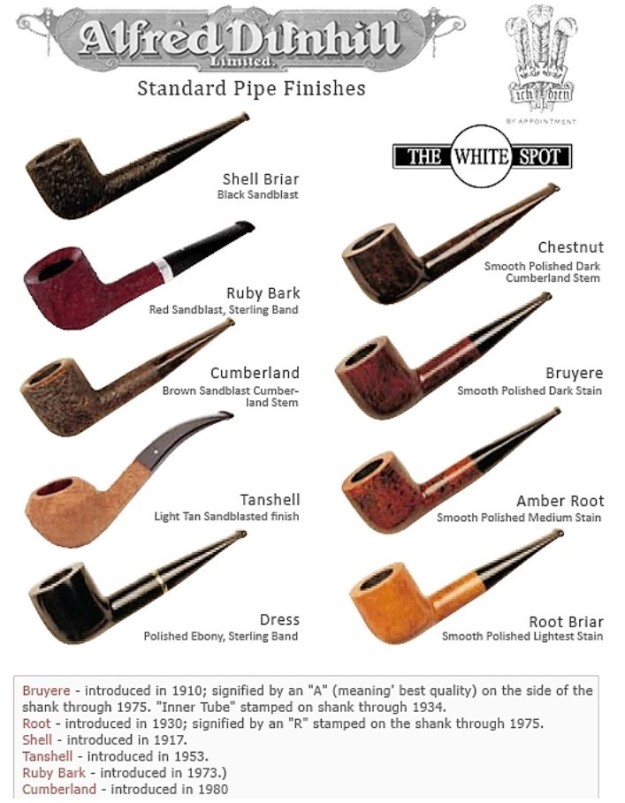 I turned to Pipephil’s dating guide to show how I arrived at the date of manufacture for this pipe (http://www.pipephil.eu/logos/en/dunhill/cledat-en1.html). I am including two charts that are provided there for the dating a pipe. I have drawn a red box around the pertinent section in each chart. Since the pipe I am working on has a suffix 8 that is raised superscript it points to 1920+ 8 for a date of 1928 on the charts below. 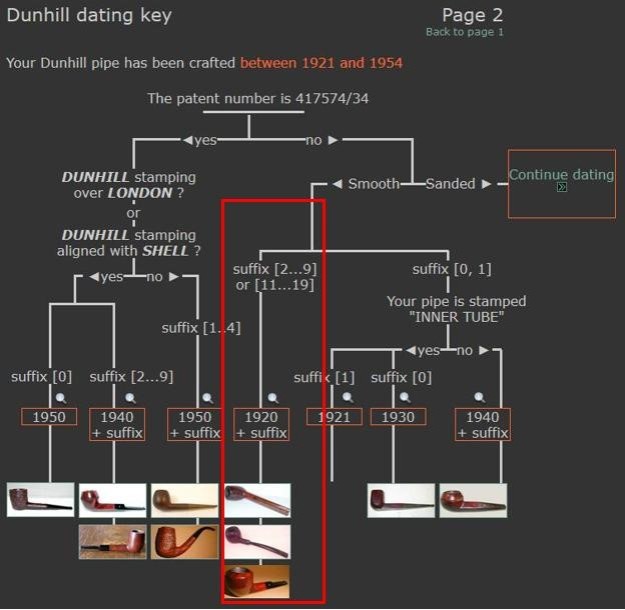 I also turned to John Loring’s, The Dunhill Briar Pipe – The Patent Year and After, to do some checking on the Patent number on this pipe. I found what I was looking for on page 58 where he spells out the Smooth Finish Patent Nomenclature Usage. In a very helpful chart he identifies the Pat No. 116989/17 as occurring between 1918? and 1934. The date stamp of 8 coincided with that identifying the year as 1928.

I now knew that I was working on a Bruyere that came out in 1928 because of the date stamp 8. The shape of the pipe was one of many Billiards that Dunhill put out and that the EK7 was a normal Panel Billiard shape with a taper stem. The Reg. No. on the underside of the stem also fits well within that date time.

I turned to work on the pipe itself. Jeff had carried out his usual thorough cleanup of the pipe. He had reamed it with a PipNet reamer to remove the cake and cleaned the reaming up with a Savinelli Fitsall Pipe Knife. He scrubbed the internals of the bowl and stem with alcohol, cotton swabs and pipe cleaners. He scrubbed the externals with undiluted Murphy’s Oil Soap and rinsed the bowl off with running water. He soaked the stem in Before & After Deoxidizer and once it had soaked rinsed it off with warm water to remove the residual solution. He dried it off and scrubbed it down with Soft Scrub All-Purpose cleaner to remove any oxidation that was still on the stem. The pipe looked very clean when I received it. 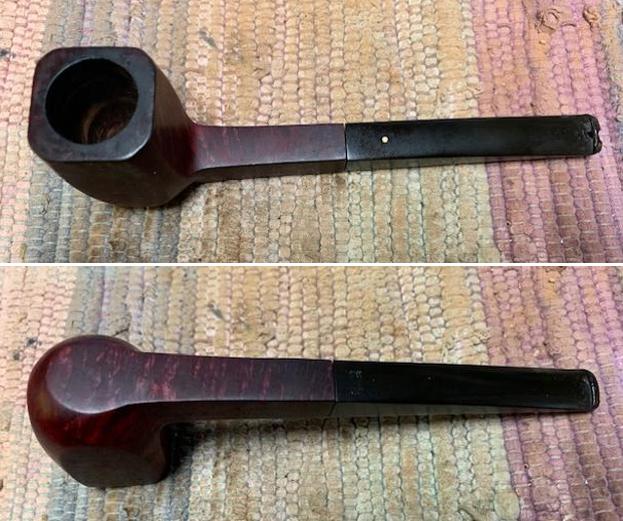 I took a photo of the rim top to show the condition. You can see the darkening on the rim top. It is roughened and slightly out of round with nicks on the inner edge. The stem came out looking quite good. There are light tooth marks and chatter on both sides near the button but the oxidation was gone.  The damage on the topside at the button can be seen in the second photo of the stem surface below.

I decided to start the restoration on this one by working on the damage on the inner edge of the bowl. It had darkening and some damage to the edge. The pipe is almost 100 years old so it is not surprising that there was burn and reaming damage marks on the edge from a previous pipeman. I worked it over with a folded piece of 220 grit sandpaper to remove and minimize the damage. When I finished with it, the bowl and the rim top looked much better. 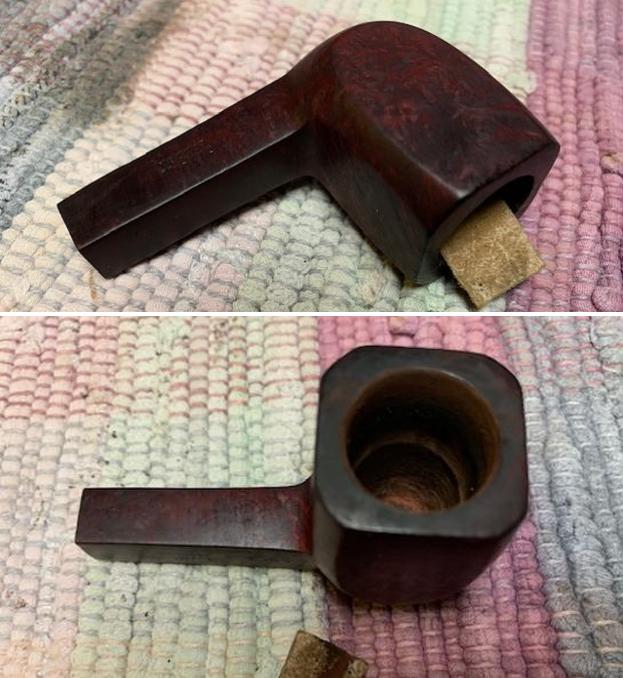 I polished the rim top and bowl with micromesh sanding pads – dry sanding with 1500-12000 grit sanding pads. I wiped the bowl down with a damp cloth after each sanding pad. Even though there were small marks on the briar from the pipe’s journey it began to take on a shine. 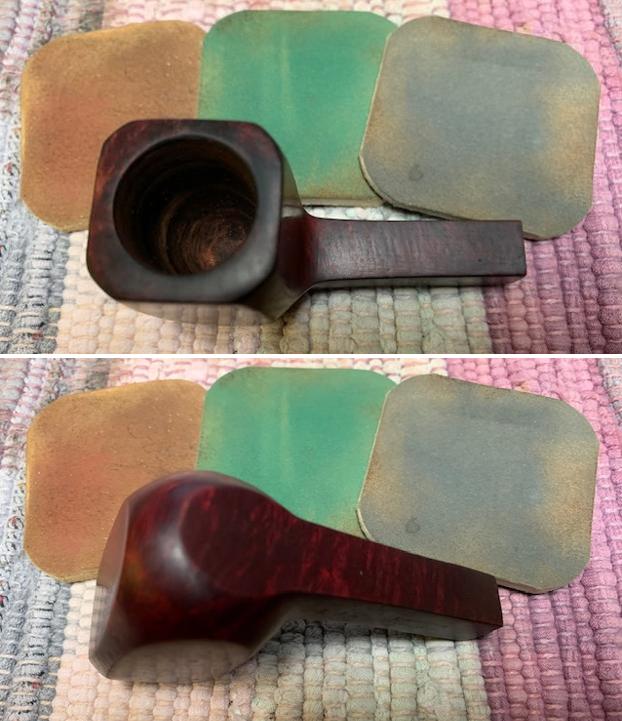 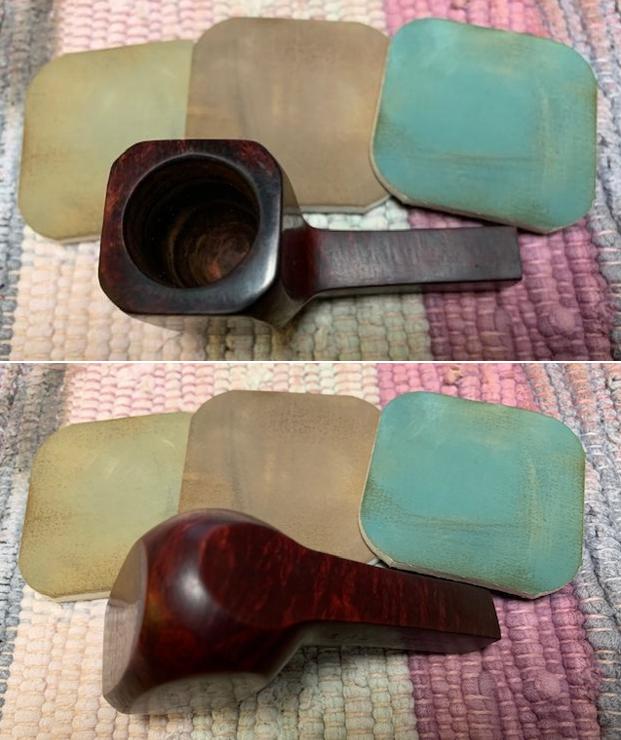 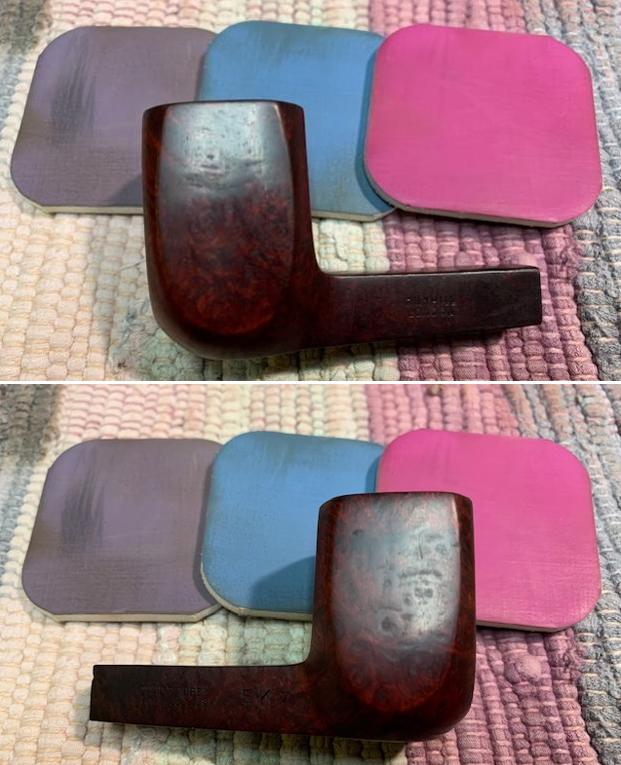 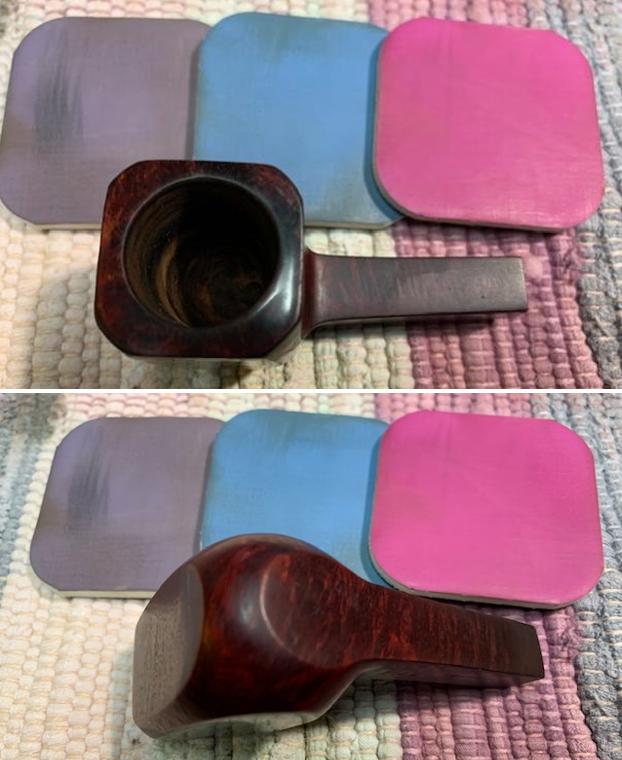 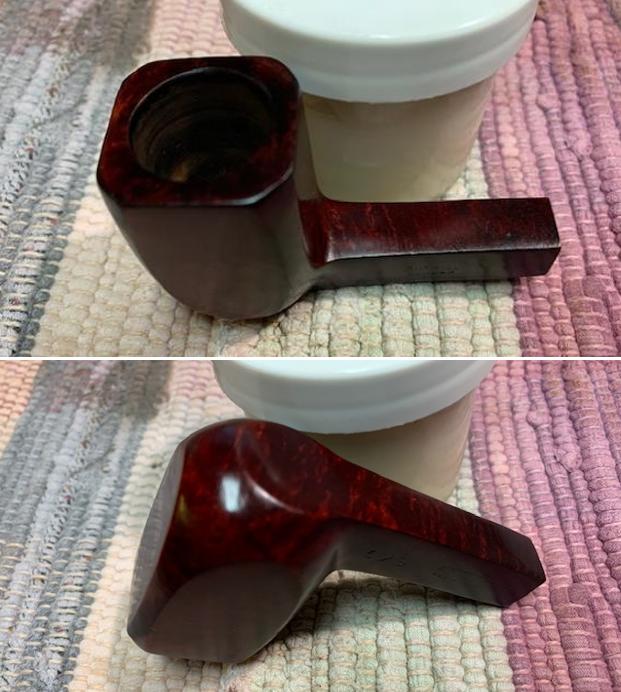 I set the bowl aside and work on the stem. I greased a pipe cleaner with Vaseline and inserted it in the button and filled in the damaged areas with black rubberized Loctite 380 CA glue. I sprayed the repair with an accelerator and removed the pipe cleaner. I checked and the airway was wide open… Whew! 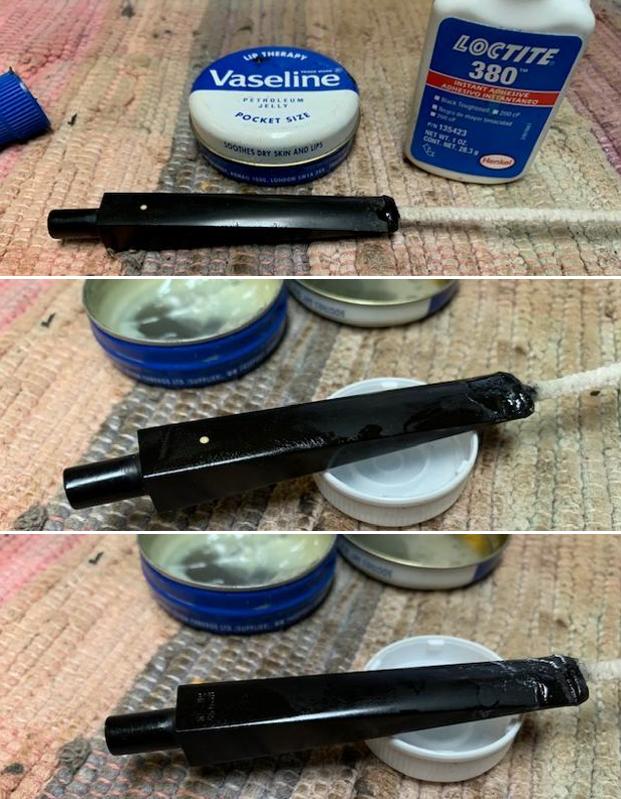 Once it cured I used files to sharpen the edge of the button and smooth out the top and undersides. I sanded it with 220 grit sandpaper to blend it into the surrounding vulcanite. I started polishing it with 400 grit wet dry sandpaper. 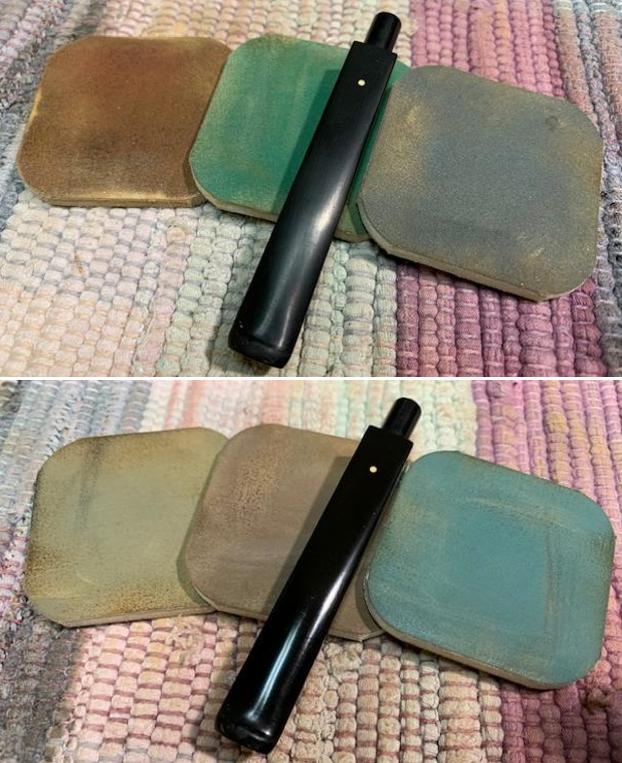 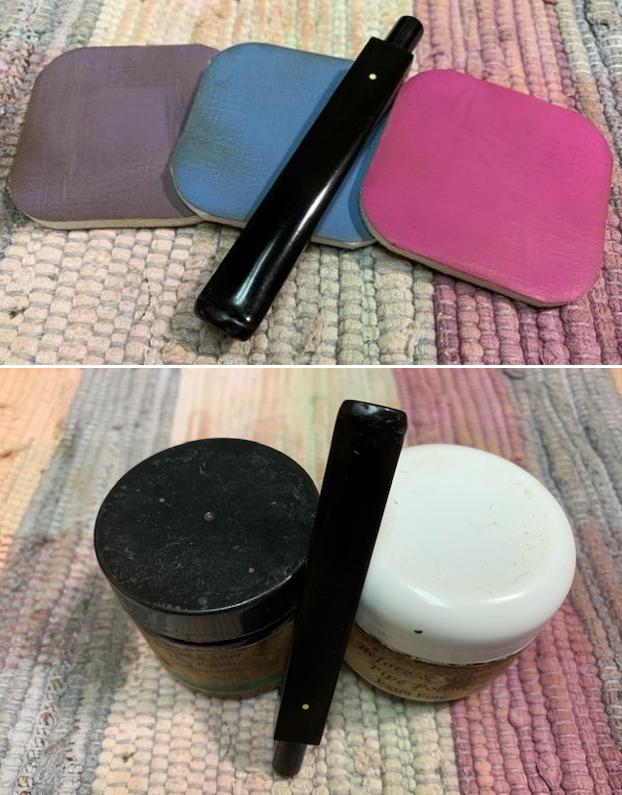 This Dunhill Bruyere EK7 Patent Panel Billiard from 1928 is a beautiful looking piece of briar that has a shape that follows grain. The Bruyere is an early finish that Dunhill specialized in making. The finish on the pipe is in excellent condition. The red and brown stain on the bowl works well to highlight the grain. The polished black vulcanite panel taper stem adds to the mix. I put the stem back on the bowl and buffed the pipe with Blue Diamond on the buffing wheel being careful to not buff the stamping. I gave the bowl and the stem multiple coats of carnauba wax on the buffing wheel and followed that by buffing it with a clean buffing pad. I hand buffed the pipe with a microfiber cloth to deepen the shine. The finished Bruyere EK7 Panel Billiard is quite nice and feels great in the hand. Give the finished pipe a look in the photos below. I can only tell you that like the other pipes I am working that it is much prettier in person than the photos capture. The dimensions of the pipe are Length: 5 ½ inches, Height: 1 ¾ inches, Outside diameter of the bowl: 1 inch, Chamber diameter: ¾ of an inch. The weight of the pipe is 29grams/1.02oz. I am still working through what I am going to do with this old timer. I will keep it with me for a while until I decide. Thanks for walking through the restoration with me as I worked over another beautiful pipe. This pipe is classic reminder that we are not pipe owners; we are pipemen and women who hold our pipes in trust until they pass on into the trust of the next generation. 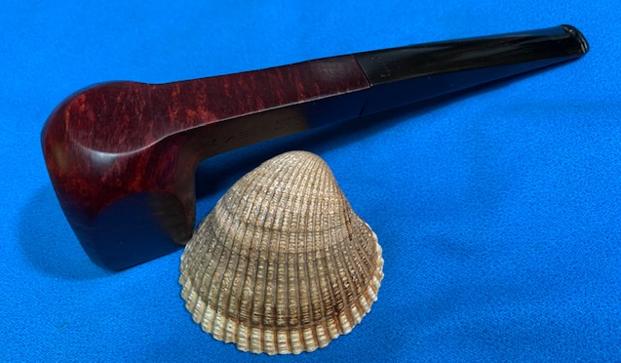 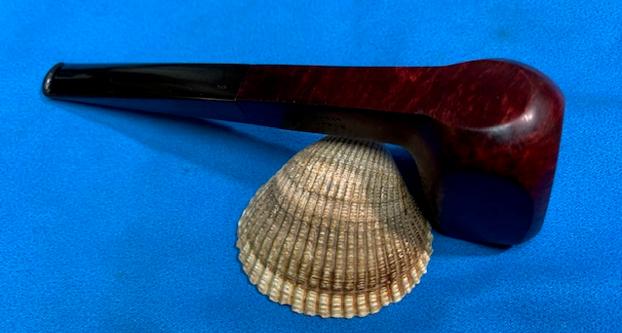 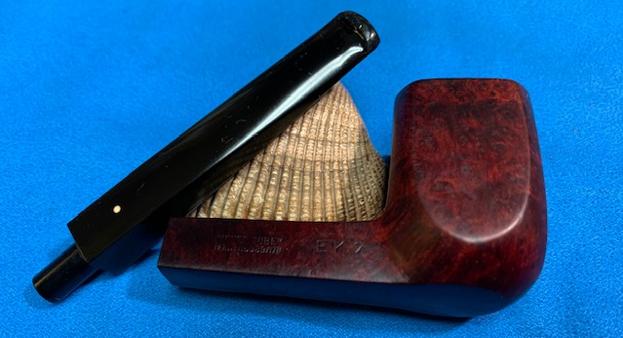 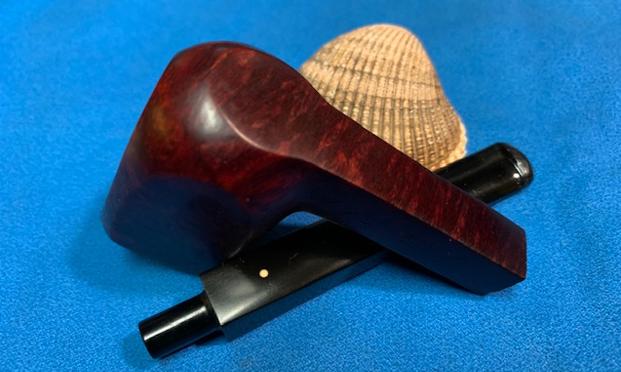 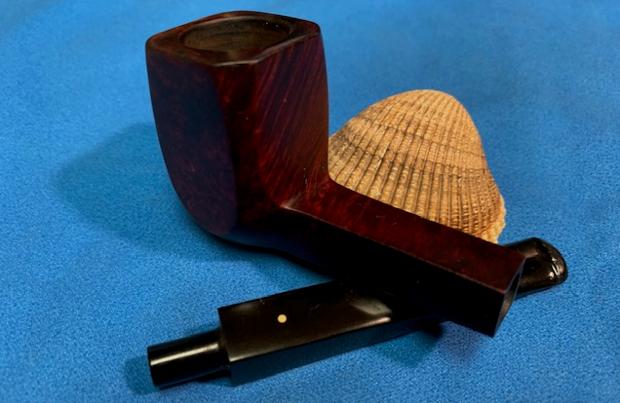