Time really flies during this COVID-19 time! It seems like just a few weeks ago I was contacted by an older gentleman about purchasing his pipe collection. He sent me the photos and I was amazed at what I saw. The collection included Dunhill pipes, BBB pipes, Orlik pipes, Barclay Rex Pipes, a couple of Meerschaums and a whole lot of other pipes. All I could say as I looked at the pipes was what a collection it was. We negotiated a deal and I think we both walked away quite happy with the exchange. But I have to tell you there was another very interesting pipe caught my interest when I looked at pictures of it. It was a beautiful older BBB Calabash with an albatross wing bone extension that is shown in the photo below. I have worked on a lot of BBB pipes over the years and never had the opportunity to work on one like this. It would be a great addition to my collection of BBB pipes. From the photos the pipe appeared to be in good condition from the photo he sent me. He said that the pipe was stamped on the left side of the silver ferrule and read AF & Co over three hallmarks. The hallmarks are as follows: an anchor (Birmingham, England), a rampant lion (the symbol for quality of the silver) and the final one is a lower case “f” (the date stamp). It has the same stamp on the rim cap and the shank extension. I could not wait to get it and have a look at it up close and personal. I had him ship it to Jeff for cleanup so it would be a while before I held in hand. 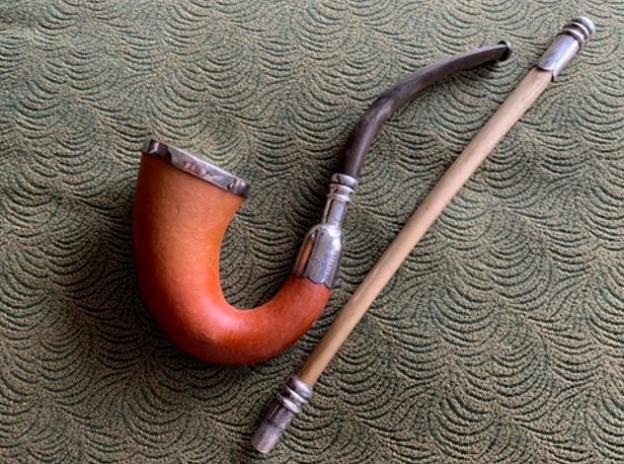 When the package arrived at Jeff’s place in Idaho he waited for me and opened the box with me on Facetime to look at the collection of pipes as he removed them from the box. It is an amazing collection and one that I am going to enjoy working on over the months ahead. Jeff took some photos of the BBB Calabash with the silver cap and bone shank extension for me to look at while he worked his magic in cleaning up the pipe. It is a real beauty. 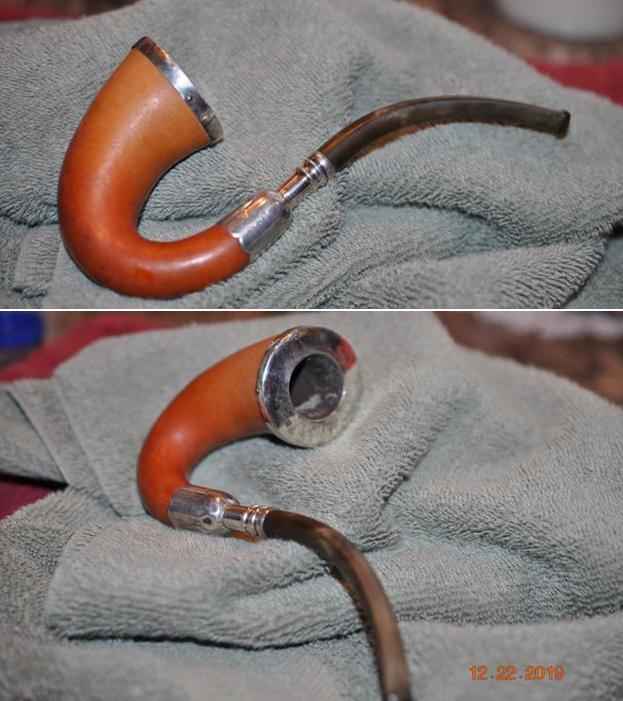 Jeff took photos of the bowl and the silver capped rim top to show the cake in the bowl. The silver cap has some nicks, dents and dings in it that will remain after the cleanup as part of the story of the pipe. He took photos of the top and underside of the stem showing the tooth chatter, scratching and oxidation on the stem surface and wear on the edges of the button.

Jeff took photos of the sides and heel of the bowl to show the condition of the gourd. You can see the beautiful shape and the contrast of the silver and the calabash even through the dirt and debris of over 105 years. 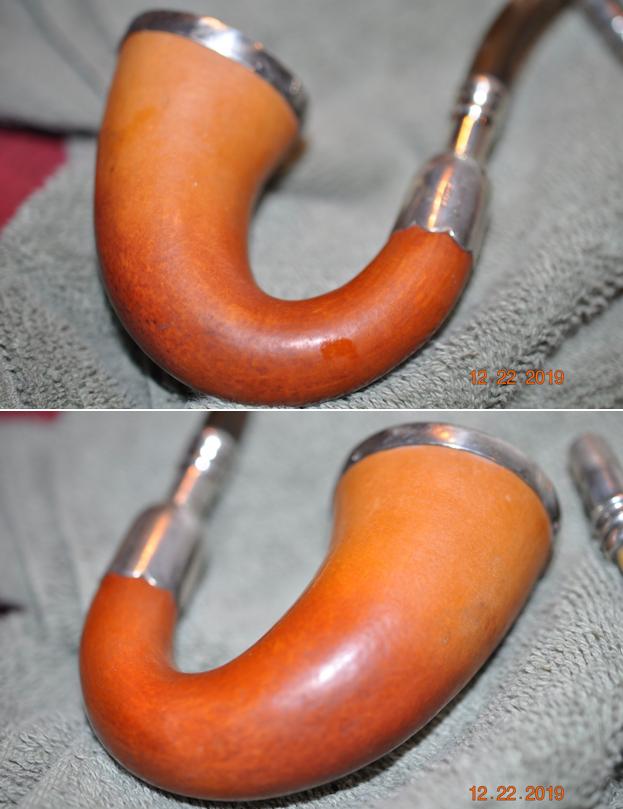 The stamping on the pipe was on the silver of the pipe rather than any where else on the gourd. It is on the rim cap, the ferrule and the end cap of the extension. On the rim cap it is stamped toward the front and reads AF&Co which are the Adolph Frankau Company. After his death, the BBB gradually became known as Britain’s Best Briars. Soon to be the oldest English trademark in current use and the first pipe ever to have a registered trade mark. “Britain’s Best Briars”, often called BBB, is one of the oldest brands still in production. At the back of the rim cap it is stamped with three hallmarks – an anchor, a lion and a lower case “f”.  The anchor identifies the city of origin of the silversmith (Birmingham, England), the rampant lion (the symbol for quality of the silver) and the final one is a lower case “f” (the date stamp). 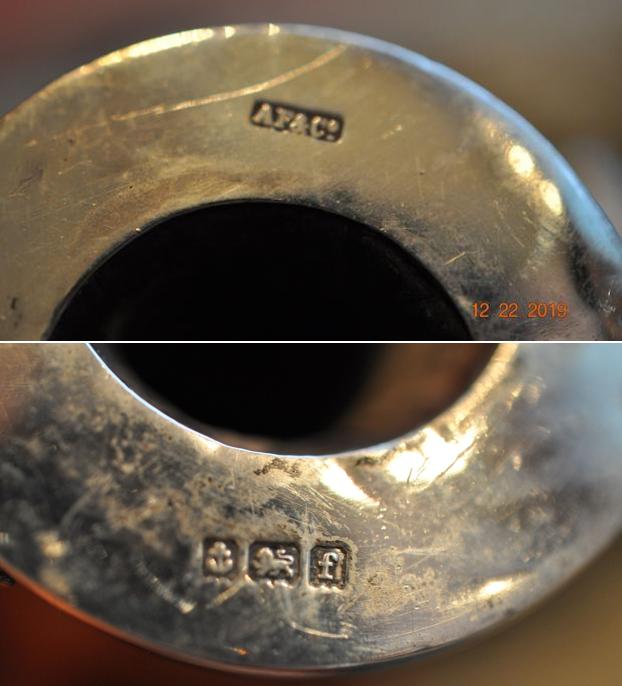 There is a slight variation on the stamping on the scalloped ferrule. It includes the BBB Diamond stamp above the AF&Co which is above the same three hallmarks noted above. The shank extension matches the ferrule exactly. All have the same date letter “h”.  The ferrule has some dents on the left side as shown in the photos below. Because of the attachment to the gourd I will be leaving the dents as a part of the pipe’s story.

I turned to one of the numerous silver hallmark chars on line for the city of Birmingham, England (https://www.silvermakersmarks.co.uk/Dates/Birmingham.html) and was able click on the section that applied to the date stamp on this pipe. The first chart below is the chart from 1773-2024.

I am also including screen capture of the enlarged section on the Birmingham dates for the letter F. This chart covers pipes made in 1778-2005. I have drawn a read box around the

hallmark pattern that matches the one on the BBB pipe silverwork. You can see that it dates the pipe to 1905. That means that this gourd calabash is over 115 years old. All of the silverwork confirms the 1905 date for the pipe. The bowl lining in the calabash seems to be a clay lining that is seat in the gourd and held in place by the silver top cap.

With the information from the two sites I had a pretty clear idea on the background of the pipe. It was definitely an old timer and really was another stellar acquisition. Now it was time to work on the pipe.

Jeff carefully cleaned the pipe from top to stern. He reamed it with a Savinelli Fitsall Pipe Knife. He scrubbed out the internals of the shank, stem and shank extension with alcohol, pipe cleaners and cotton swabs until the pipe was clean. Without being able to remove the bowl liner the internal cleaning of the gourd was complicated but he cleaned it as much as possible. He scrubbed the exterior of the bowl with Murphy’s Oil Soap and a tooth brush to remove the grime and grit on the calabash and the tarnish and lava on the rim top. The finish looks much better and has a deep richness in the colour that highlights gourd. The rim top looked very good and the inner and outer edge looked very good. The nicks and dents in the silver remain and will be “war wounds” that travel with the pipe. Jeff scrubbed the stem with Before & After Deoxidizer to remove the oxidation on the rubber. He worked it over with Soft Scrub All Purpose Cleaner to remove any remnants of oxidation. When the pipe arrived here in Vancouver for the second stop of its restoration tour I was amazed it looked so good. Here are some photos of what I saw. 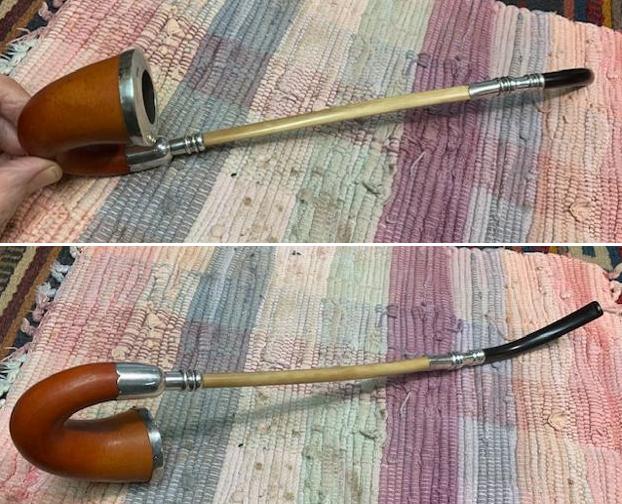 I took the pipe apart and took a photo of the pipe with the short stem and with the extension. It is a good looking pipe and very unique. 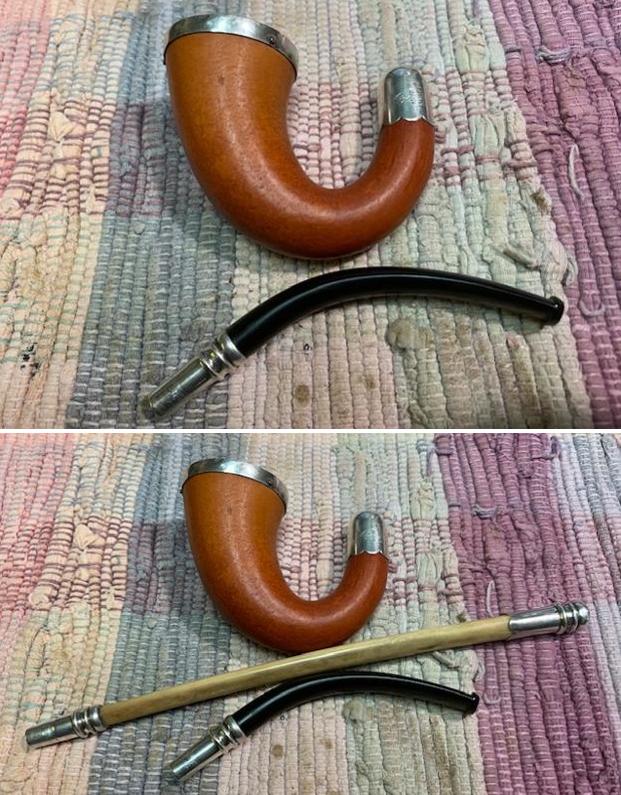 I polished the silver rim top, edges and the gourd with micromesh sanding pads – dry sanding it with 1500-12000 grit pads. After each pad I wiped the briar down with a damp cloth.  I was able to give a shine to the silver, remove scratches a bit and also polish the gourd. 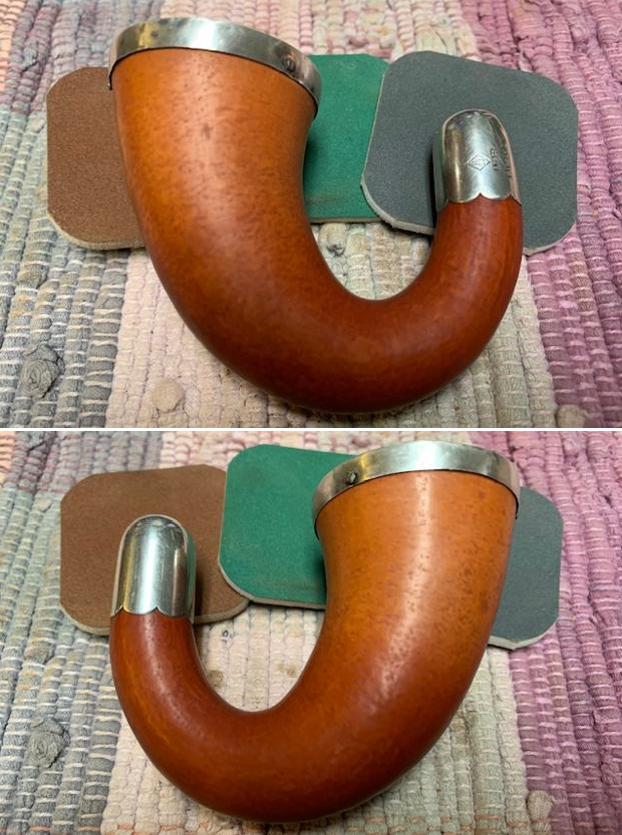 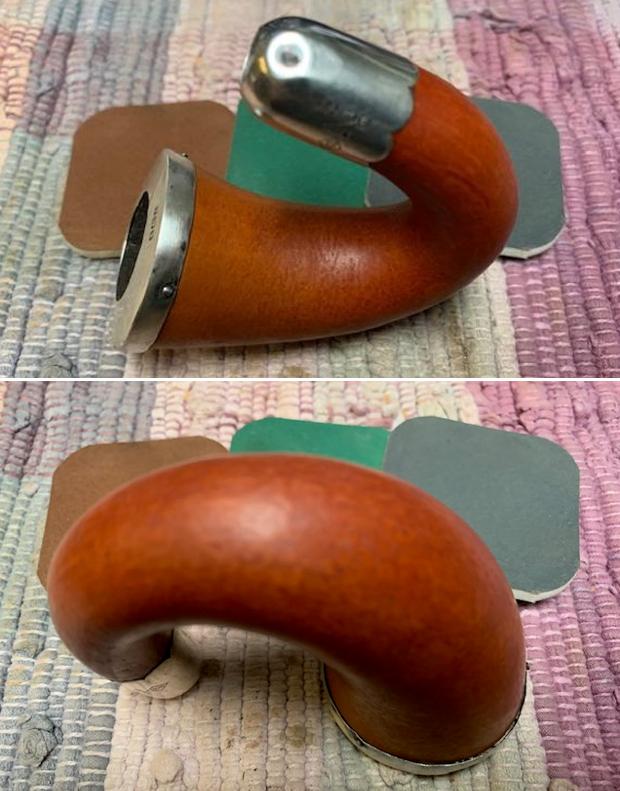 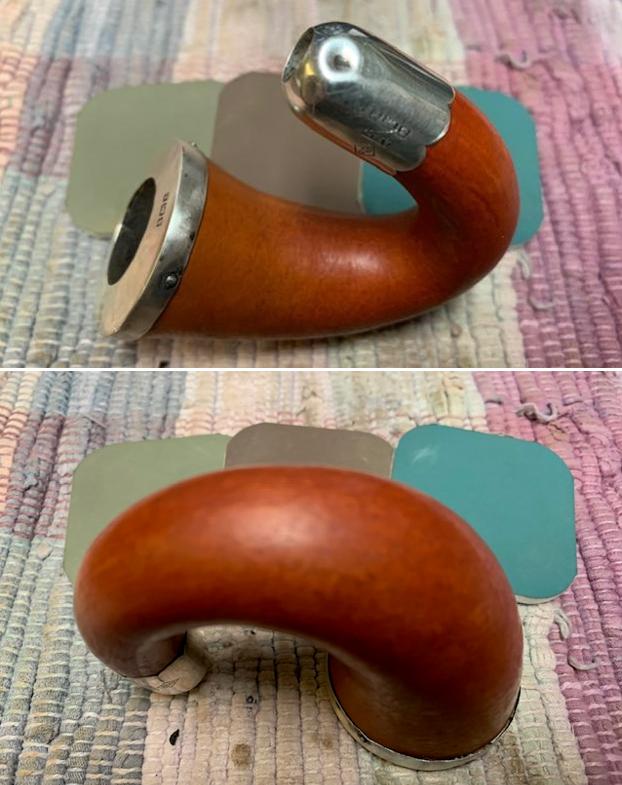 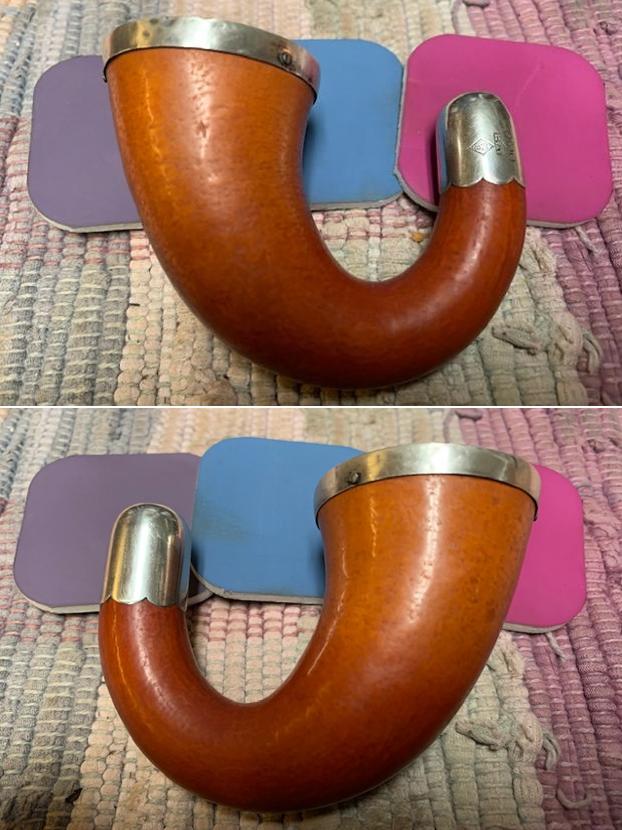 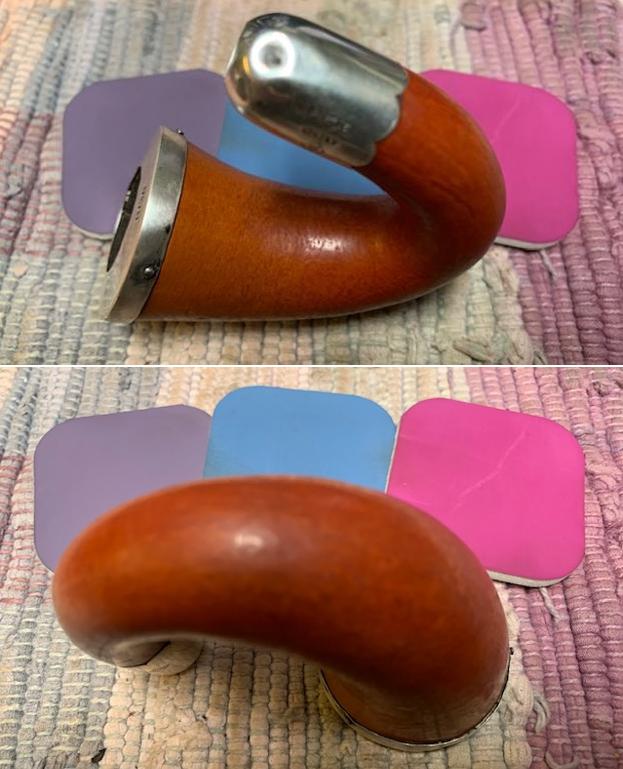 I worked some Before & After Restoration Balm into the surface of the gourd with my fingertips to clean, enliven and protect the gourd. I let the balm sit for 15 minutes and then buffed with a cotton cloth to raise the shine. The photos show the bowl at this point in the restoration process.

I polished the scalloped silver ferrule with a jewelers cloth to remove any residual tarnish and also to protect it from future tarnish (at least for awhile). The interesting detail for me is that the ferrule is scalloped and the end of the shank extension that holds the stem also is scalloped. 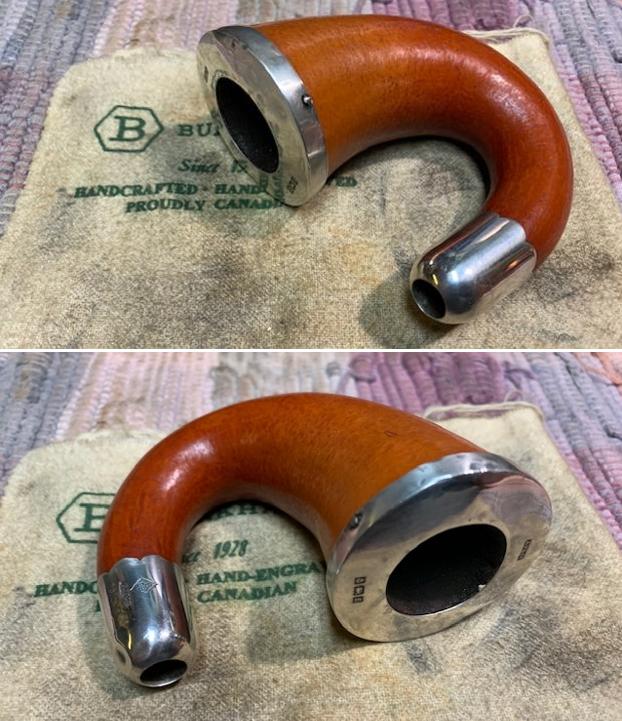 With that done the bowl was finished other than the final buffing. I set it aside and turned my attention to the stem. I sanded out the tooth marks and chatter on the stem with 220 grit sandpaper. I started the polishing with 400 grit wet dry sandpaper. 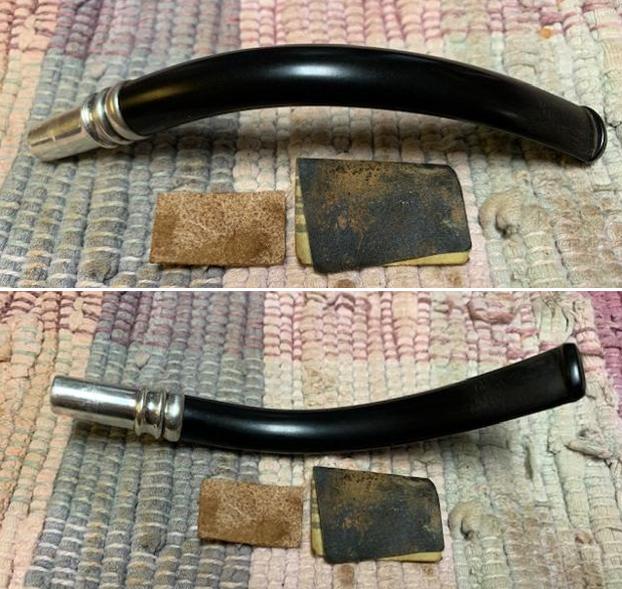 I polished the silver stem cap with a jewelers cloth that helps remove any residual tarnish and protects the silver.

I polished the stem with micromesh sanding pads – dry sanding with 1500-12000 grit sanding pads. I wiped it down after each sanding pad with Obsidian Oil. I polished it with Before & After Pipe Stem Polish – both Fine and Extra Fine.

With the bowl and the short stem finished I put the pipe back together and buffed it on the wheel using Blue Diamond to give it a shine. I gave the bowl and stem multiple coats of carnauba wax on the wheel and then buffed it with a clean buffing pad to raise the shine. I hand buffed it with a microfiber cloth to deepen the shine. It really is an amazing little pipe. The dimensions of this part of the pipe are – Length: 6 ½ inches, Height: 2 ¾ inches, Outside diameter of the bowl: 1 ¾ inches, Chamber diameter: 7/8 of an inch. The weight of the short version of the pipe is 2.33 ounces/66 grams. This unique find – a 1905 BBB Silver Capped Gourd Calabash is joining the other pipes in my collection of BBB pipes and will hold a place of honour while it is in my trust. This is another pipe that one day soon I will enjoy a special bowl of tobacco in it and be transported to a slower paced time in history where I can enjoy a respite. With the pipe and short stem finished all that remained was to finish the shank extension that fit in the shank end of the pipe. 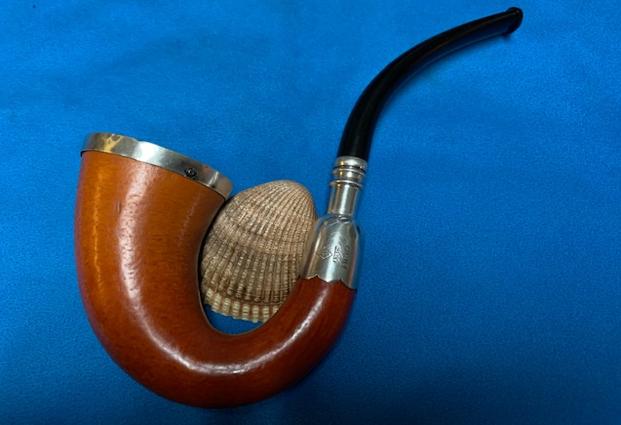 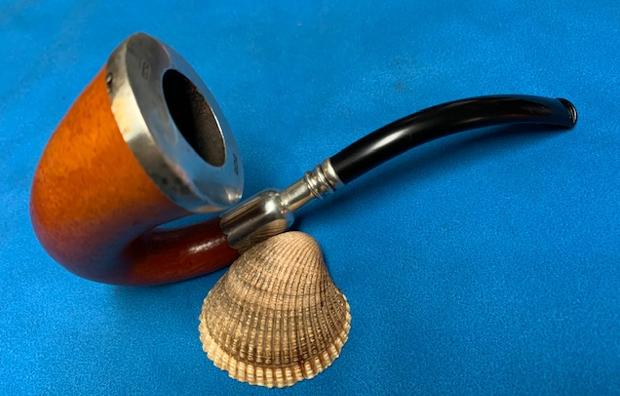 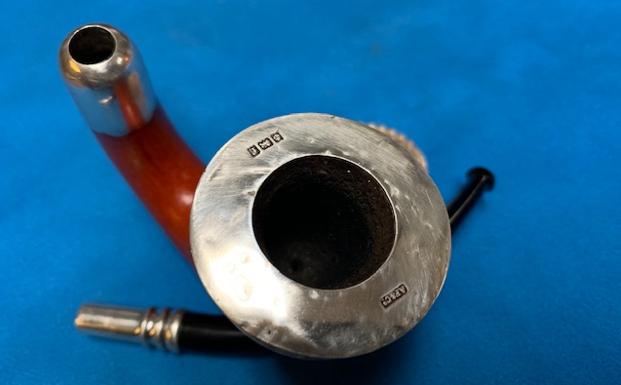 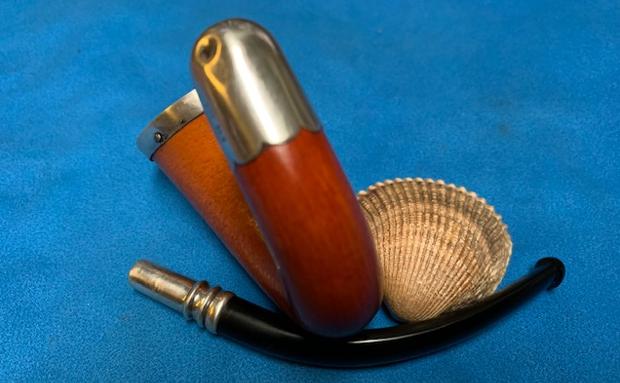 The end that fit into the shank had the same end cap as the stem itself. The opposite end was fitted to receive the end cap of the stem. The tube between the caps is albatross wing bone. There was a small crack in the bone at the joint of the silver that held the stem. I filled in the crack with clear CA glue to stabilized. It I polished it with the full gamut of micromesh sanding pads to blend it in the rest of the bone. I polished the silver with a jewelers cloth to remove residual tarnish in the turnings of the silver caps and polished the shank extension with Obsidian Oil. 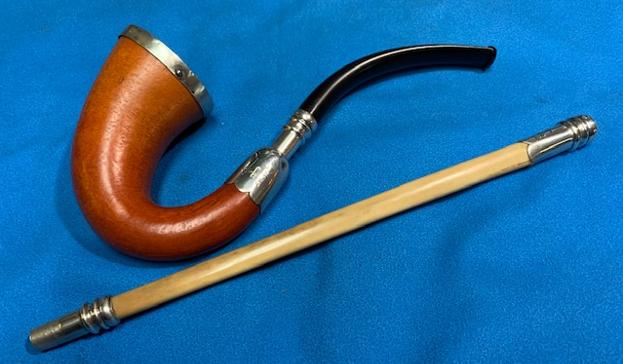