The next pipe came to us from an auction in Huntington Station, New York, USA and has been sitting here since mid-2019. I am finally getting to it. Even though the plateau rim top was dirty it had some charm showing through the grit and grime of the years. The grain around the bowl and shank were quite stunning under the grime. The acrylic shank extension was an incredible mixture of brown, orange and blue swirls. On the left side of the shank it was stamped Asselta. The pipe came to us without a stem so I would need to pick through what I have here and find a good option. The pipe is a smooth egg shape bowl with a plateau rim. The finish is filthy with dust and grit ground into the briar of the bowl and shank sides. The bowl had a thick cake and an overflow of lava on the top and inner edge of the rim obscuring the plateau. Jeff took some photos of the pipe to show its overall condition before he started his cleanup work. 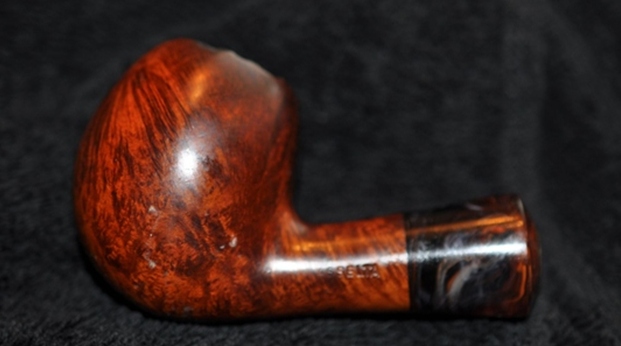 He took photos of the rim top and bowl to give a clear picture of the thickness of the cake and the lava and dust ground into the plateau rim top.

Jeff took photos of the sides and heel of the bowl and shank and the acrylic swirled shank extension to give a picture of what the briar around the pipe looked like. 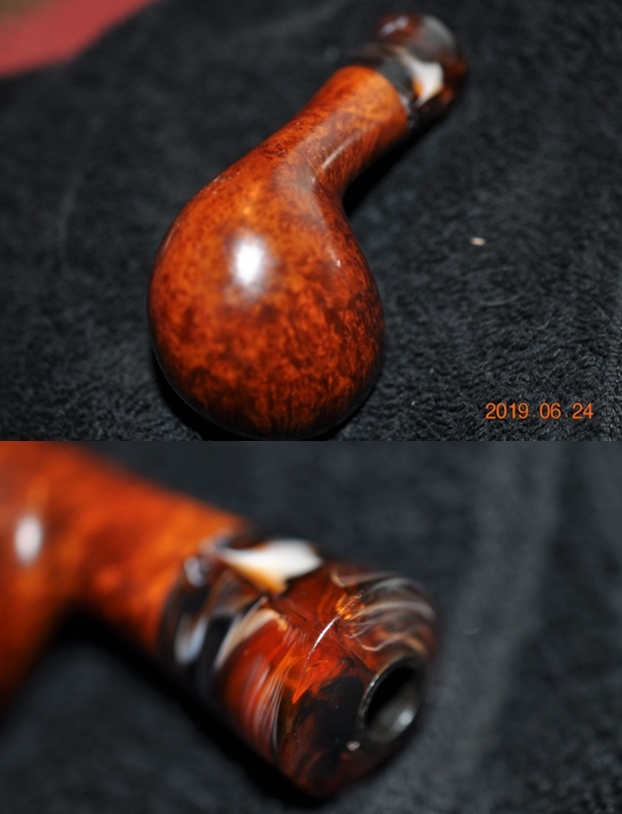 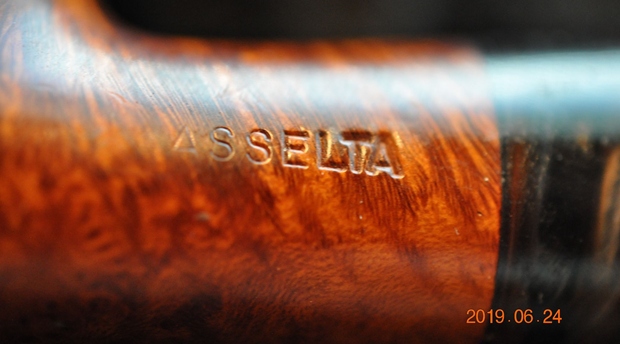 I turned to Pipedia and did a search for Asselta pipes. The search came with a link in the American Pipe Brands (https://pipedia.org/wiki/American_Pipe_Brands_%26_Makers_A_-_B). It appears that the pipe was potentially made in Long Island, New York, USA. Seeing how the pipe came to us from New York it had not traveled far in its life before we purchased it. Now it has traveled from New York to Idaho and then to Vancouver, Canada. Where its journey will end only time will tell.

Now it was time to work on the pipe. Jeff had cleaned up the pipe with his usual penchant for thoroughness. He reamed the pipe with a PipNet Pipe Reamer and cleaned up the remnants with a Savinelli Fitsall Pipe Knife.  He scrubbed the bowl with undiluted Murphy’s Oil Soap with a tooth brush. He worked over the debris on the plateau rim top and was able to remove it. He rinsed it under running warm water to remove the soap and grime. He cleaned out the inside of the shank and the airway with alcohol, cotton swabs and pipe cleaners. I took photos of the pipe bowl once I received it. It really looked good.

The plateau rim top was very clean and the bowl was spotless. It was a good looking pipe. The swirled acrylic shank extension was beautiful. 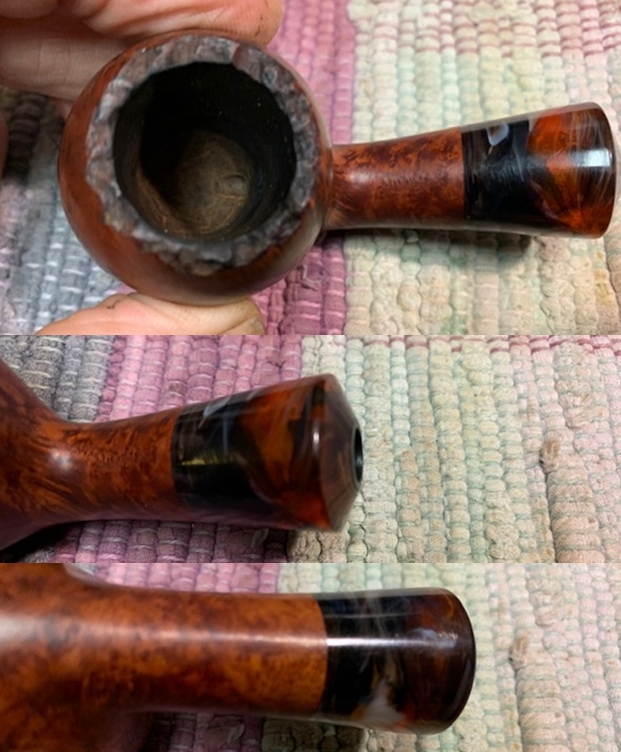 I took a photo of the stamping on the left side of the shank. It was clear and read as noted above. 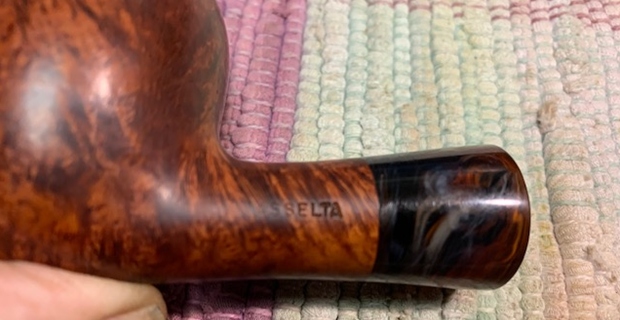 I went through my assortment of stems and found one that really worked well with the shank extension and the bowl. It is going to be a great looking pipe. 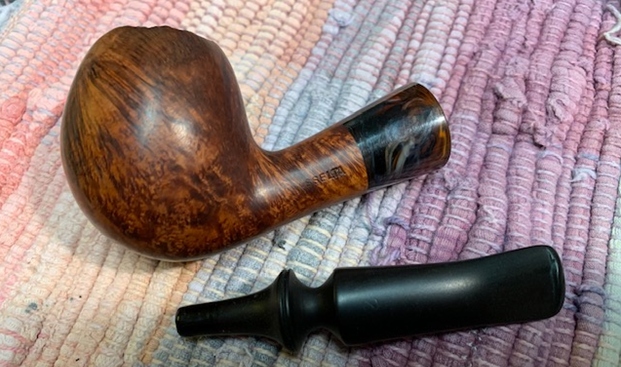 I put the stem in the shank and took photos of the new look of the bowl. I like the overall look that pipe had. Once I cleaned up and polished the stem it would look very good.

I took close up photos of the bowl and plateau rim top and the stem. I was going to need to remove the tooth marks but the stem was going to look very good.

The bowl was in such good condition that I started my work on it by rubbing down with Before & After Restoration Balm. I worked it into the surface of the bowl sides and shank with my fingertips. I used a horsehair shoe brush to work it into plateau top. The product works to clean, enliven and protect the briar. I let the balm sit for 15 minutes and then buffed with a cotton cloth to raise the shine. 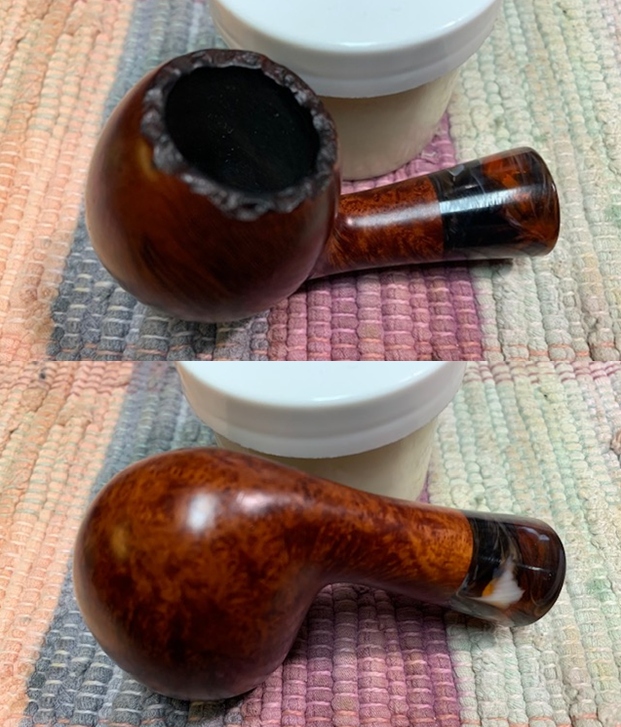 I set the bowl aside and turned my attention to the stem that I had picked out. I “painted” the surface of the stem with the flame of a lighter to lift the tooth marks. I was able to lift all of them on the top side and all but two on the underside. I filled them in with super glue and set it aside to cure.

I used a file to flatten the repair on the stem and reshape the button. Once I had it reshaped and the repair flattened I sanded the stem with 220 grit sandpaper to remove the scratching and blending them into the surface. I began the polishing with 400 grit wet dry sandpaper. 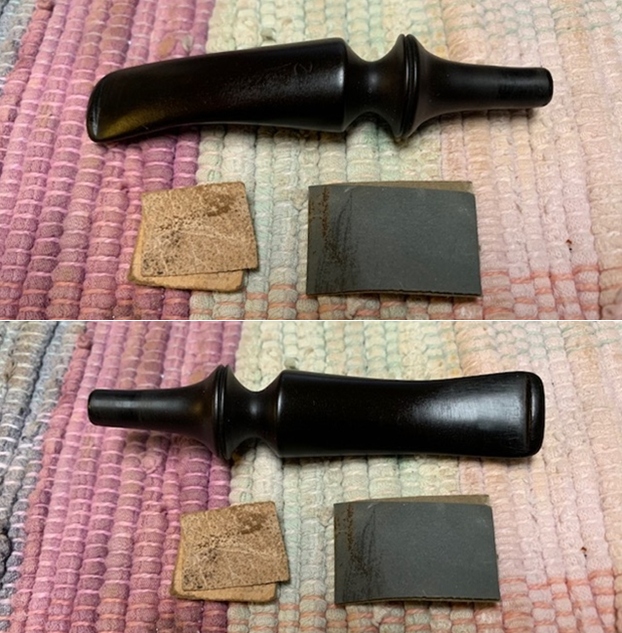 I polished the scratches out of the acrylic stem with micromesh sanding pads – 1500-12000 grit pads. I wiped it down with a damp cloth after each sanding pad. I used Before & After Pipe Polish – both Fine and Extra Fine to further polish the stem. 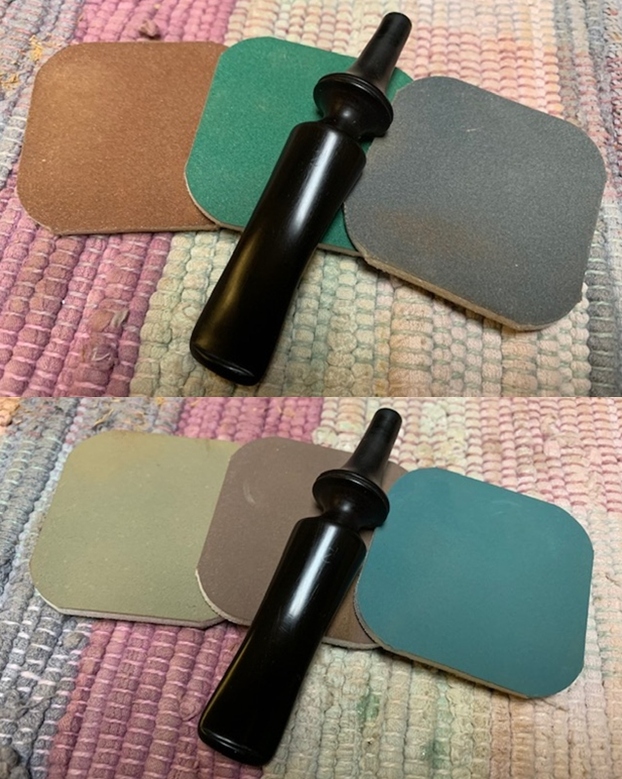 This smooth finish/plateau rim top Asselta Freehand Egg with a swirled acrylic shank extension is a great looking pipe. It is a pipe made in Long Island, New York but other than that the carver is a mystery to me. The replacement fancy, saddle vulcanite stem works well and goes nicely with the extension and the briar. I put the stem back on the bowl and buffed the pipe with Blue Diamond on the buffing wheel using a light touch on the briar. I gave the bowl and the stem multiple coats of carnauba wax on the buffing wheel and followed that by buffing the entire pipe with a clean buffing pad. I hand buffed the pipe with a microfiber cloth to deepen the shine. The finished Asselta Freehand Egg fits nicely in the hand and feels great. Give the finished pipe a look in the photos below. The dimensions of the pipe are Length: 6 ¼ inches, Height: 2 inches, Outside diameter of the bowl: 1 ¼ inches, Chamber diameter: ¾ of an inch. The weight of the pipe is 53grams/1.87oz. I will be adding it to the rebornpipes store shortly in the American Pipe Makers Section. Thanks for reading this blog and my reflections on the pipe while I worked on it. There are many more to come! 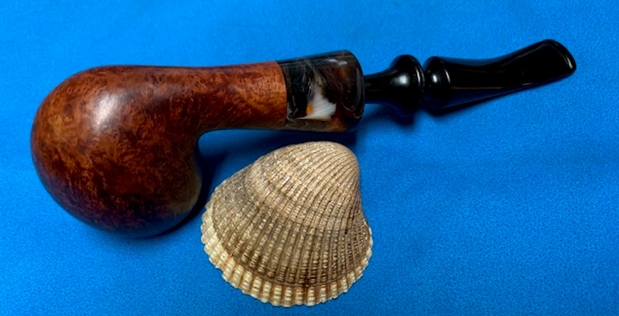 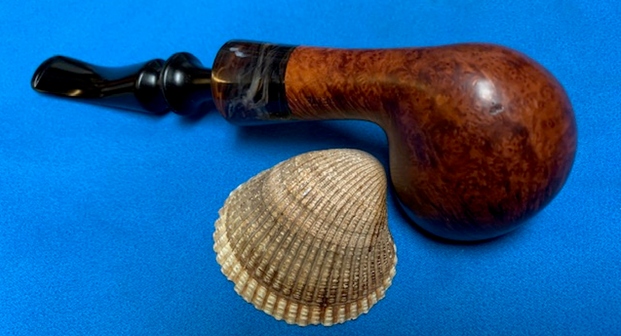 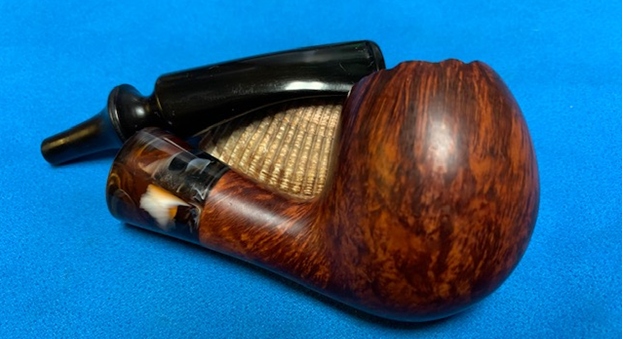 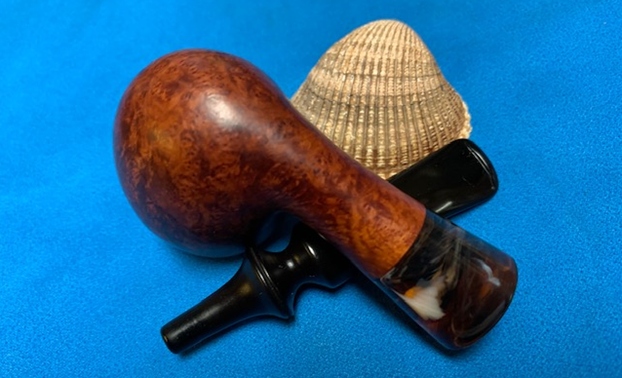 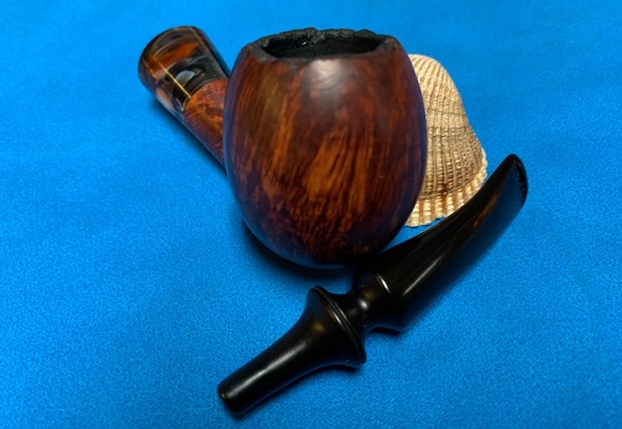 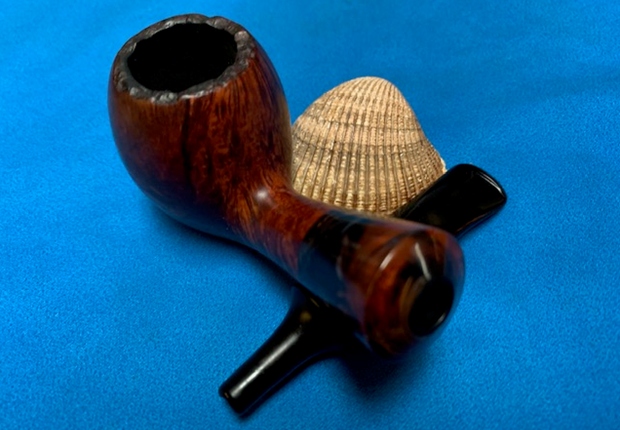 3 thoughts on “Restoring and Restemming an Asselta Freehand Egg”