The next pipe in the queue came to us from a recent pipe hunt that Jeff and his wife did in Utah. It is one of five pipes that he found in a new spot that he visited. All of the pipes have a similar pattern of rustication around the bowl and shank. It combines both smooth and panels of rustication in a unique pattern. The five pipes include a Bullmoose, a Pot, a straight Apple, a Bulldog and a squat Apple. Four of the five were unsmoked and the fifth one lightly smoked. All had vulcanite stems – both taper and saddle style. The finish on all of them had a coat of shiny varnish that would need to be removed. All were dusty from lack of use. All had precarbonized bowls. All of them except the Bullmoose were stamped on a smooth panel and read Cowan’s [over] Hand Made [over] Custom. With the stamping in a variety of spots on the shank from pipe to pipe. The seller told Jeff he had just got a hold of the group from someone who brought them into the shop. He had no further information on the brand so they were a mystery. When I received the five I took some photos of the lot to give a feel for this group of pipes. 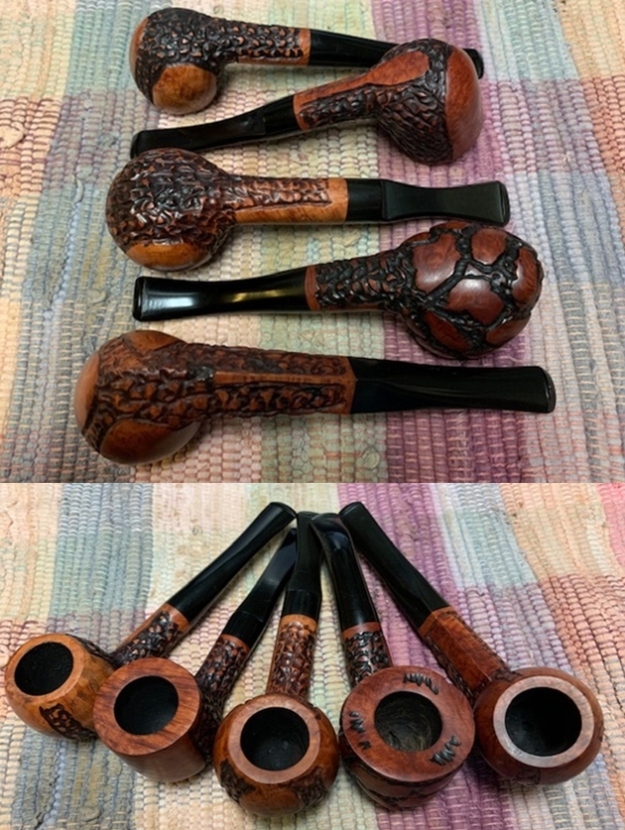 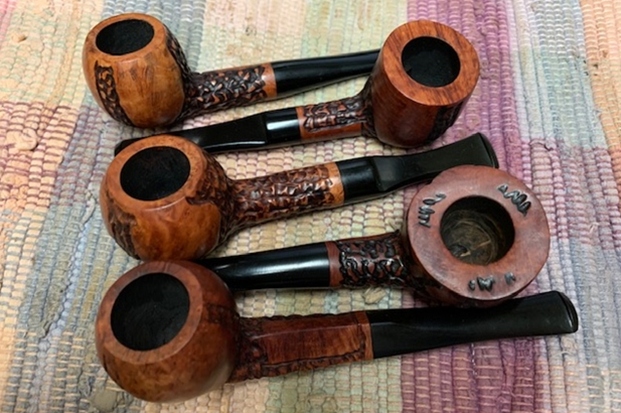 Now that you have a sense of the five pipes that came from Cowan’s Hand Made I turn to the one smoked pipe in the lot – a Bullmoose. It is also the only one that does not bear maker’s stamp on the panel provided on the shank side. Everything about it including its inclusion in the group of five say that it was made by Cowan’s. What should have been on the left side is Cowan’s [over] Hand Made [over] Custom. The panel is the correct size for that stamp and matches the proportions of the stamping on all of the other pipes. This one was a Bullmoose shape with a rustication similar to the other pipes but also a bit unique in that it had a variety of smooth spots around the bowl sides. The shank rustication matches that found on the others. The rim top was wide and beveled inward with some rusticated spots around the top. There was a light cake in the bowl and no damage to the inner or outer edges of the rim. The shiny varnish coat was worn but not flaking. The stem was lightly oxidized and has some light tooth chatter on the surface of both sides near the button. Jeff took photos of the pipe before he started his clean up work. 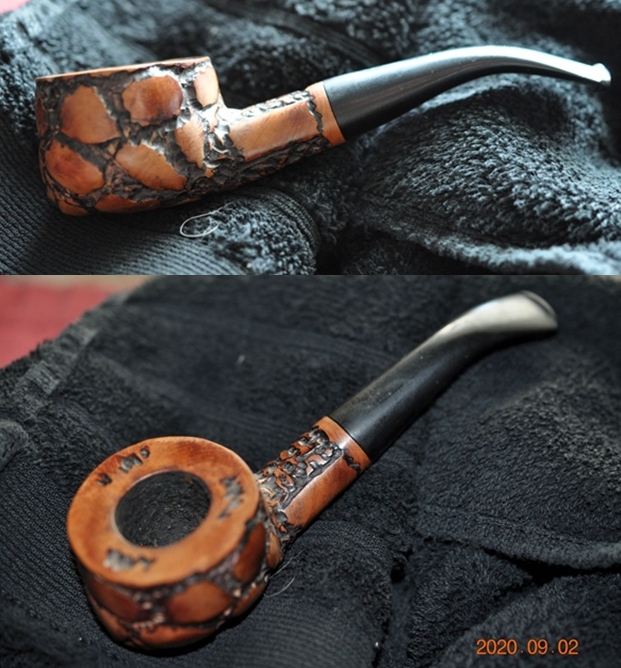 The next photos show the rustication around the sides of the bowl.  The rusticated portions around the panels matches that found on the other pipes in this group. 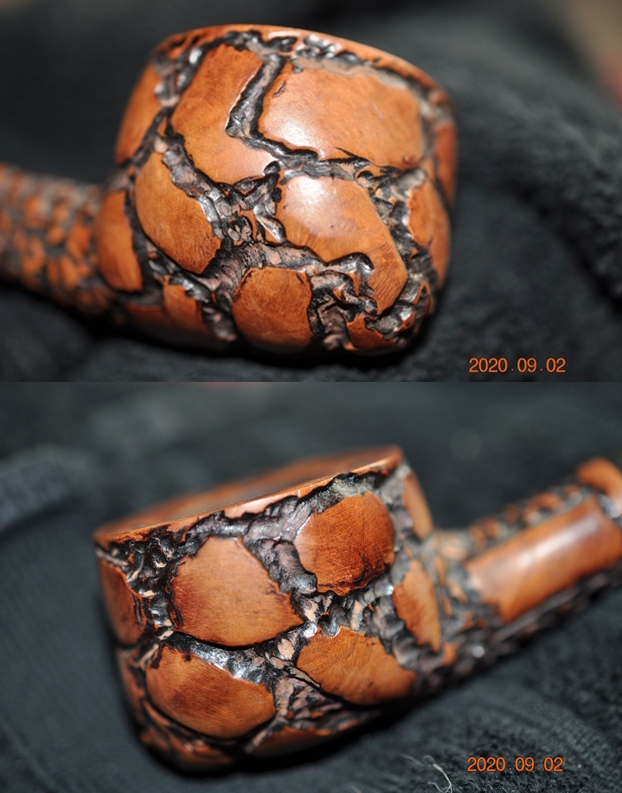 He took photos of the area where the other pipes are stamped. It seems to me that there is a faint ghost of the stamping visible in the photo below.

I turned to Pipedia to see if I could find any specific information on the Cowan’s Brand. I turned to the Pipemakers and Pipe Brands section and looked for the brand under American pipe makers (https://pipedia.org/wiki/American_Pipe_Brands_%26_Makers_C_-_D). There was a listing but there was not an article on the brand. I quote:

Louis Cowan, an artisan who produced for Marxman after working for Loewe & Co. in England.

I am pretty certain that Louis Cowan is the artisan I was looking for as the pipe was quite a bit like the Marxman pipes that I have worked on. It seems that he was a carver who produced for Marxman and previously for Loewe and Company in England.  Now it was time to work on the pipe. 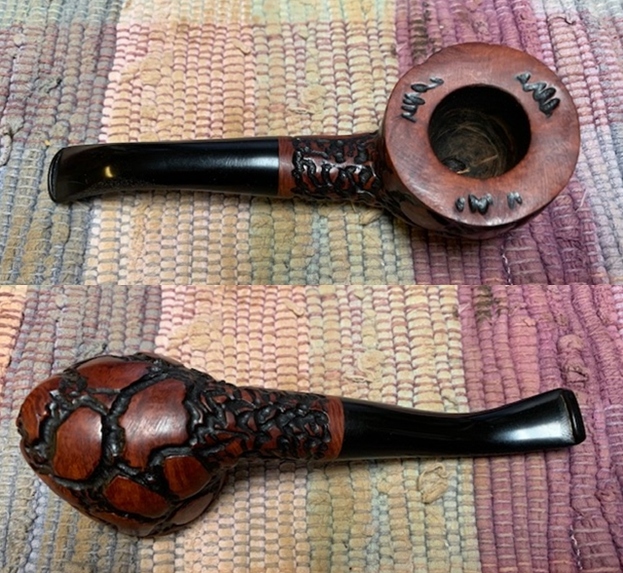 I took a close up photo of the rim top to show the general condition. You can see is clean and that it looks good.  The stem is in good condition with a little bit of chatter on both sides near the button.

I took a photo of the panel that was where the pipe should have born the stamping that was on the other pipes. With a lens it appears that there is some faint stamping present.

I removed the stem from the shank and took a photo to show that the pipe looked like. 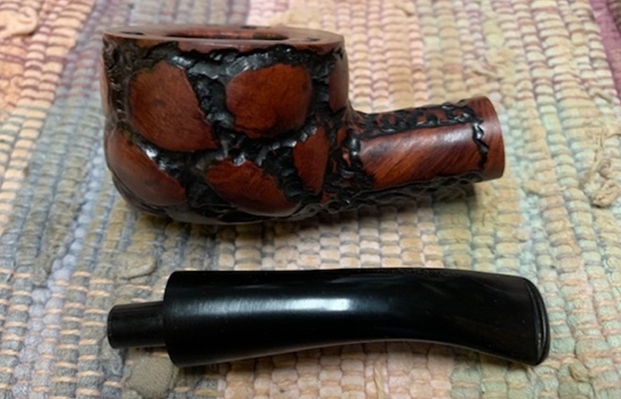 I polished the rim top and the smooth panels on the bowl and shank with micromesh sanding pads to clean up the finish and give it a shine. I wet sanded with 1500-12000 grit pads and wiped the bowl down after each pad with a damp cotton cloth. The photos tell the story.

I worked some Before & After Restoration Balm into the surface of the briar with my fingertips and a horse hair shoe brush to clean, enliven and protect it. I let the balm sit for a little while and then buffed with a cotton cloth to raise the shine.

I set the bowl aside and turned my attention to the stem. I polished the vulcanite with micromesh sanding pads – 1500-12000 grit pads. I wiped it down with Obsidian Oil after each sanding pad. I used Before & After Pipe Polish – both Fine and Extra Fine to further polish the stem.

With both parts of this unique Cowan’s Hand Made Custom Bullmoose finished, I polished the bowl and the stem with Blue Diamond polish on the buffing wheel. I gave the bowl and the stem multiple coats of carnauba wax. I buffed the pipe with a clean buffing pad to raise the shine. I hand buffed it with a microfiber cloth to deepen the shine. The pipe polished up pretty nicely. The mix of grain on the bowl came alive with the buffing. The finish on the briar works well with the polished black vulcanite stem. The finished pipe is a well-proportioned, nicely grained Cowan’s Hand Made Custom Bullmoose. Have a look at it with the photos below. The dimensions are Length: 5 ½ inches, Height: 1 ½ inches, Outside diameter of the bowl: 1 ¾ inches, Chamber diameter: 7/8 of an inch. This interesting Hand Made Bullmoose will be going onto the rebornpipes store very soon with the other four Cowan’s pipes. If you would like to purchase it and carry on the legacy of the previous pipe smoke send a message or an email to me. Thanks for walking through the restoration with me of this hand made pipe. 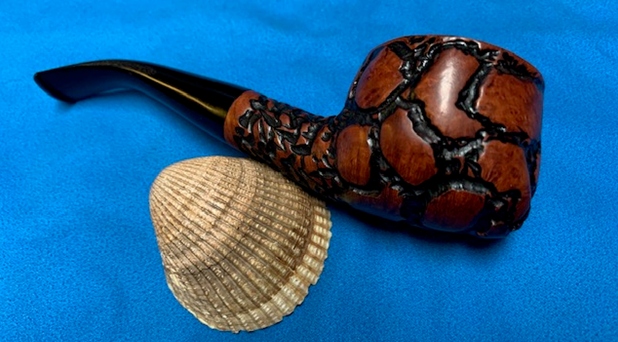 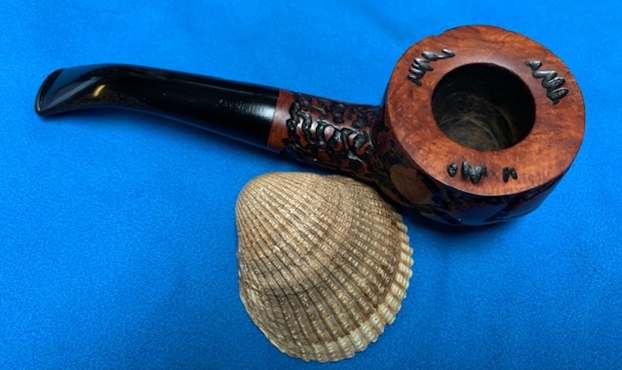 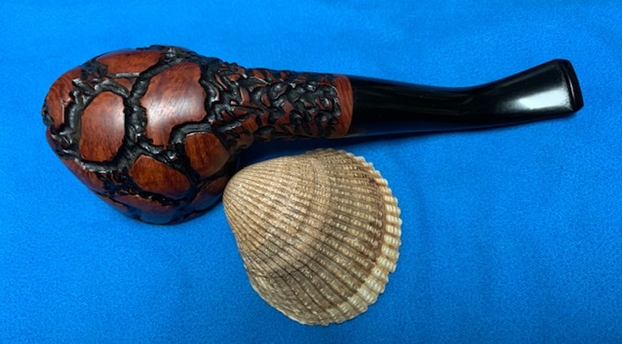 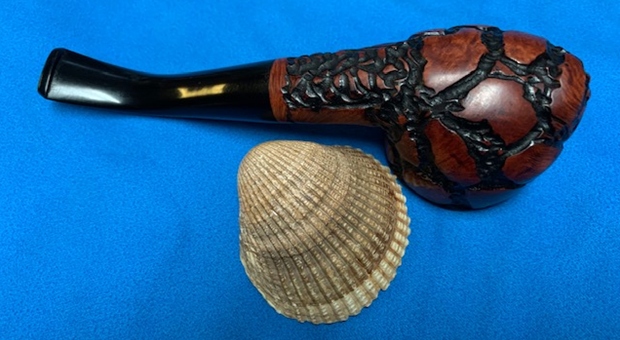 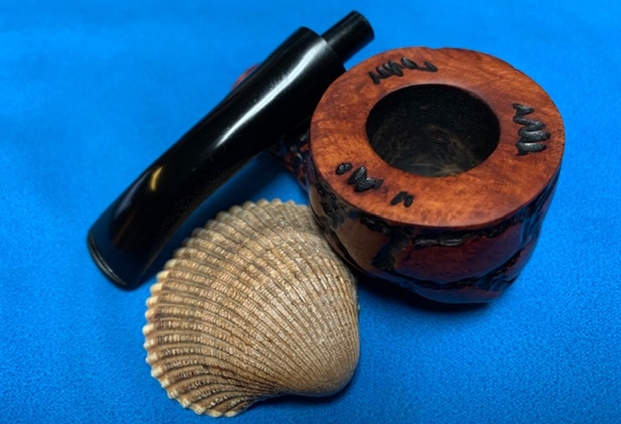