The next pipe on the work table came to me from another of our estate purchases. It has been around for a while waiting to be worked on. Jeff did the original photographs of the pipe in March of 2017. It is a beautifully grained Orlik De Luxe Apple that is really quite nice. The stamping is the clear and readable. It is stamped on the left side of the shank and reads the Orlik De Luxe [over] Made in England. The shape number is stamp on the right side of the shank near the bowl and reads L190. The smooth finish had a lot of grime ground into the bowl and some darkening around the sides of the bowl. There was a burn mark on the front rim top and bowl front. The bowl was heavily caked and had an overflow of lava on the top of the rim. It was hard to know what the rim top and inner edge of the bowl looked like under the grime. The vulcanite taper stem and was calcified, oxidized and had light tooth chatter and marks on the top and underside but the surface of the button was surprisingly free of damage. The stem also had the brass O logo on the top of the stem. The pipe had promise but it was very dirty. Jeff took photos of the pipe before he started his cleanup work.

He took photos of the rim top and bowl to give a clear picture of the thickness of the cake and the overflow of lava on the rim top. You can see the damage on both the outer and the inner edge of the bowl. He also took photos of the top and underside of the stem to show the oxidation, calcification, light chatter and tooth marks.

Jeff took a photo of the stamping on the sides of the shank and the top of the stem. It reads as noted above.

I turned to the listing on Pipephil on Orlik pipes hoping to find a similar pipe to the one I am working on (http://www.pipephil.eu/logos/en/logo-o2.html). Unfortunately there was not a pipe like the De Luxe I am working on. It is also not listed in the section I included below.

I turned next to a previous blog I had written on Orlik pipes. It contained a lot of information that I had worked through in identifying the Double Bore pipe that I was restoring at that point. There was a lot of crossover information (https://rebornpipes.com/2020/05/31/restoring-an-orlik-double-bore-long-shank-saddle-stem-billiard/). I quote that blog below.

In 1899, a pipe manufacturer was founded in London, Bond Street, by Louis Orlik. L. Orlik Ltd. started to produce high quality pipes for a relatively low price but high service and soon became quite popular. By 1907 they used the name L & A Orlik, which apparently added Louis’s brother, Alfred to the company name. In the first quarter of 1900 they also established in Birmingham. This can be verified by silver hallmarks. In 1980 the company was acquired by Cadogan. Like many of London’s other pipe manufacturers they moved to a new built factory in Southend-on-Sea. As all current brands in the Cadogan group, Orlik was being produced in those factories.

Orlik used the slogan “Smoked by all shrewd judges” “(who are also loved by his hard judge)” with a portrait of a judge wearing a wig. The picture is still used in Denmark for manufacturing of Orlik cigarettes.

The article also had a catalogue of the various pages. I am including a copy of the page that shows the shape 190. In this case the shape matches but it does not have the “L” preceding the 190 shape number. 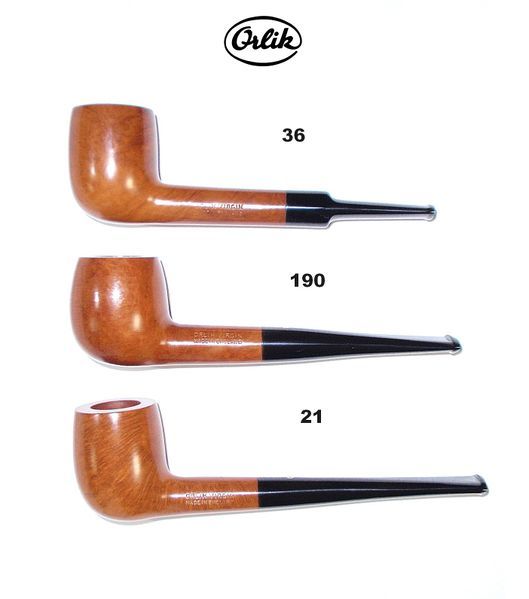 There was also some helpful information on the dating of the brand. The pipe I am working on is Pre-Cadogan era as is proven by the stamping on the shank as below.

I also am including a list of the various lines of Orlik pipes sold. I have included a screen capture of the list below. I have drawn a blue box around the De Luxe Pipes. The L is the designation for the De Luxe Series of pipes.

It is definitely another interesting piece of pipe history. This Pre-Cadogan Orlik was made before 1980 when Cadogan bought the brand.  Armed with the brand information and some parameters for the age of the pipe I turned to work on it.

The rim top cleaned up really well with the lava coat removed. The rim top, inner and out edges of the rim showed some damage. There were burn marks on the front and back of the bowl and rim top. The stem surface looked very good with heavy oxidation remaining and some light tooth chatter and marks on both sides ahead of the button. 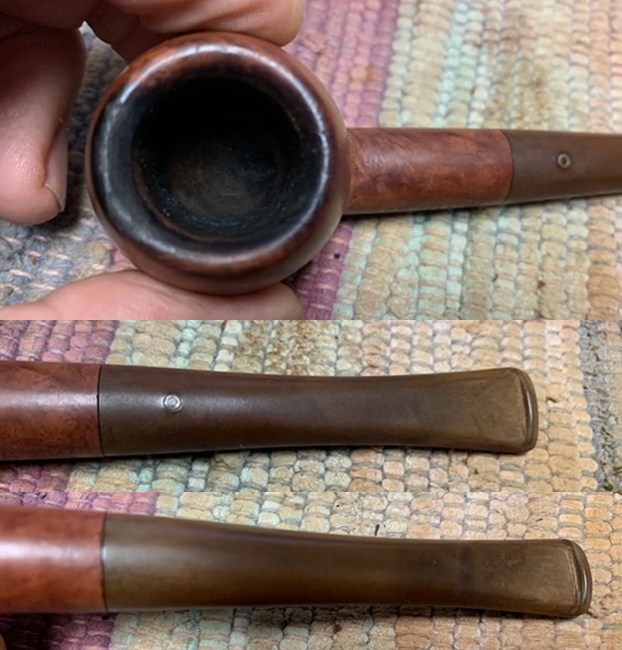 I took photos of the stamping on the sides if the shank. It reads as noted above.

I removed the stem and took a photo of the pipe to give a sense of the whole. It is a well shaped apple with great grain. 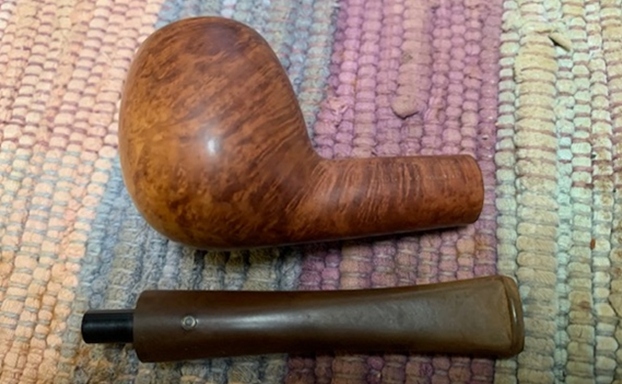 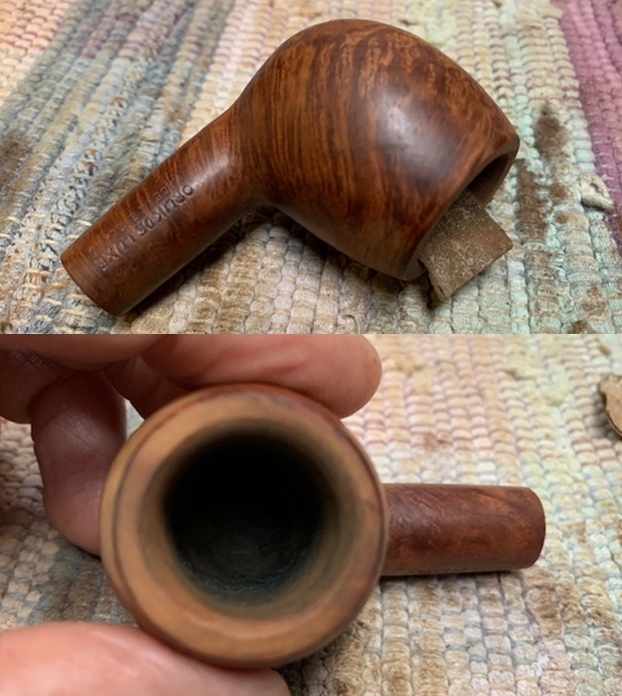 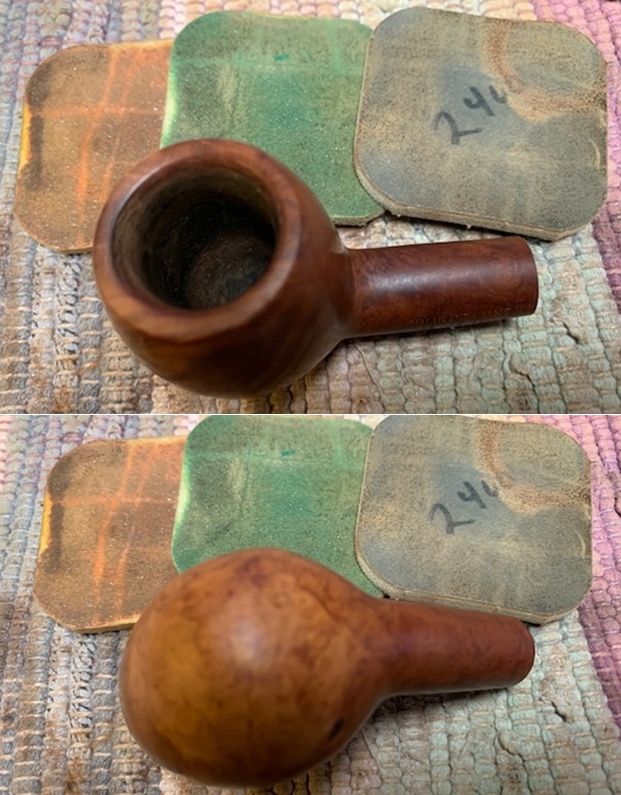 The heel of the bowl was washed out and did not match the rest of the stain around the pipe. I touched up the washed out areas on the bowl with a Maple stain pen. The match was perfect.

I rubbed the bowl and shank down with Before & After Restoration Balm. I worked it into the surface of the bowl sides and shank with my fingertips to clean, enliven and protect the briar. I let the balm sit for a little while and then buffed with a cotton cloth to raise the shine.  It helped to blend the stain into the rest of the bowl. 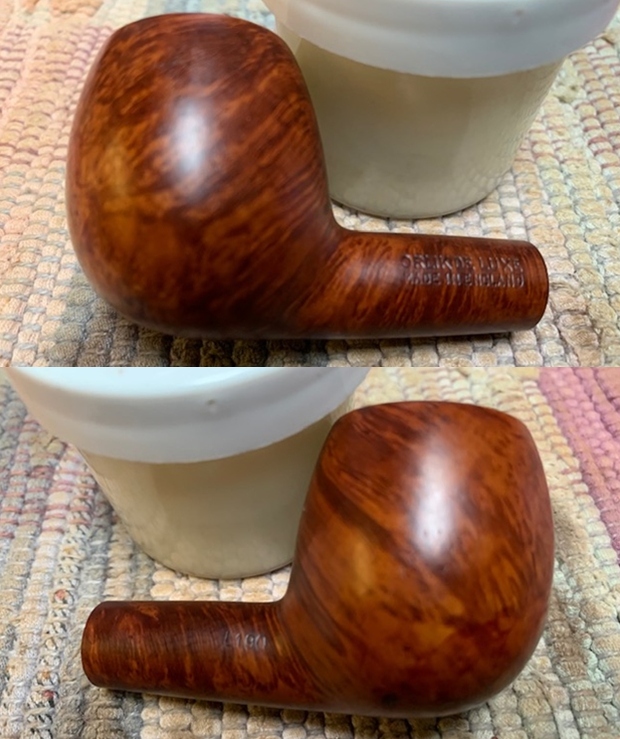 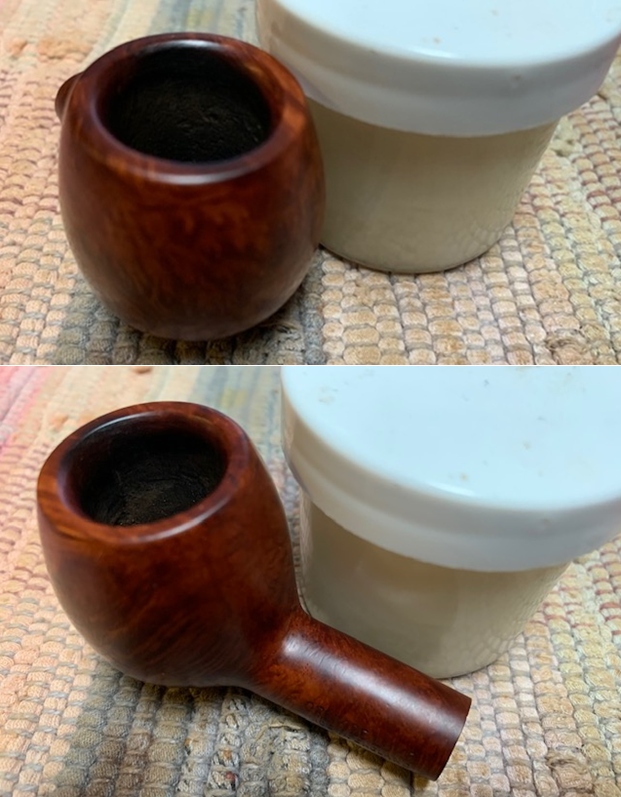 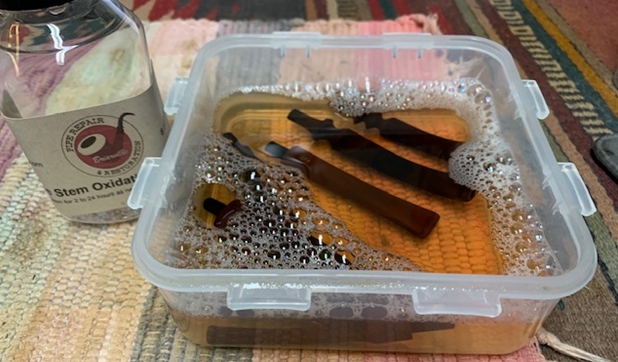 I removed the stem from the bath, scrubbed lightly with a tooth brush and dried if off with a paper towel. I was surprised that it was quite clean. Just some light oxidation on the top of the stem remained. The bath was dark with the removed oxidation of the seven stems. I cleaned out the inside of the stem with alcohol and pipe cleaners. 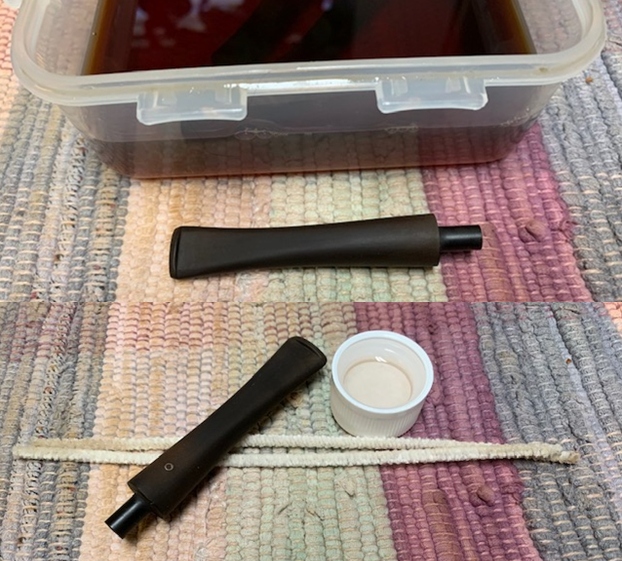 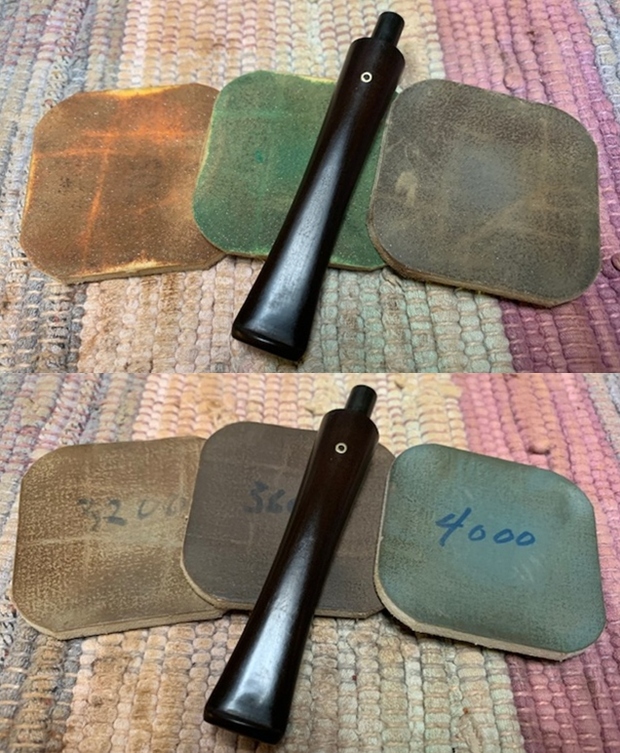 This well made, classic Orlik De Luxe L90 Apple with a vulcanite taper stem is a great looking pipe now that it has been restored. The rich finish that Orlik used came alive with the polishing and waxing. I put the stem back on the bowl and carefully buffed the pipe with Blue Diamond on the buffing wheel using a light touch on the briar. I gave the bowl and the stem multiple coats of carnauba wax on the buffing wheel and followed that by buffing the entire pipe with a clean buffing pad. I hand buffed the pipe with a microfiber cloth to deepen the shine. The finished Orlik Apple is a beauty and fits nicely in the hand and looks very good. Give the finished pipe a look in the photos below. The dimensions of the pipe are Length: 5 ½ inches, Height: 1 ¾ inches, Outside diameter of the bowl: 1 ¼ inches, Chamber diameter: ¾ of an inch. If you are interested in adding this pipe to your collection send me a message or an email. Thanks for reading this blog and my reflections on the pipe while I worked on it. There are many more to come! 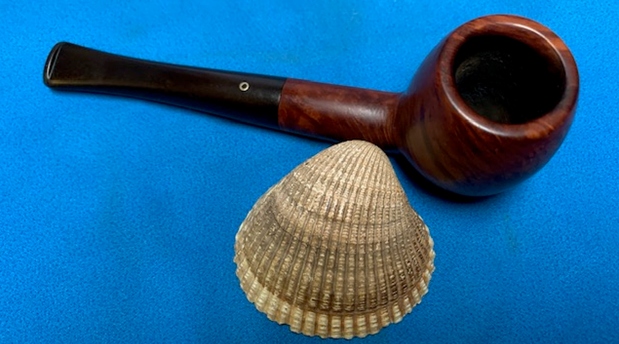 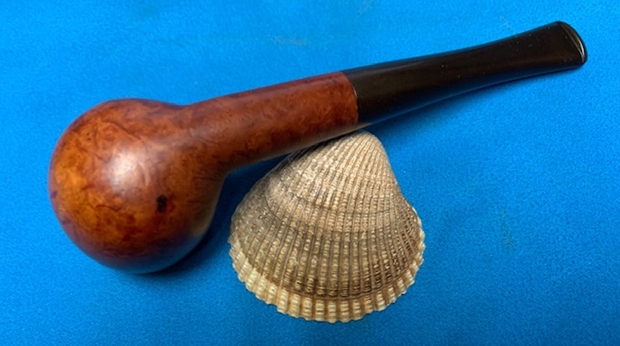 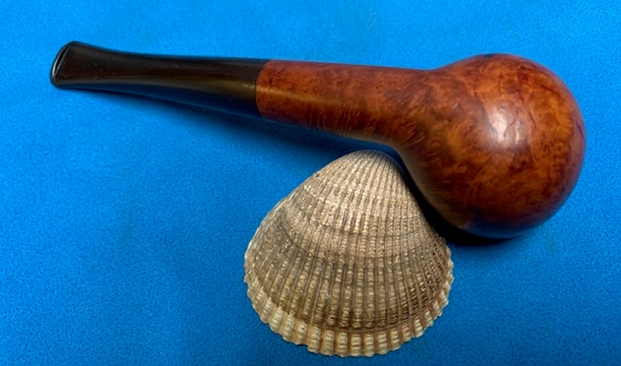 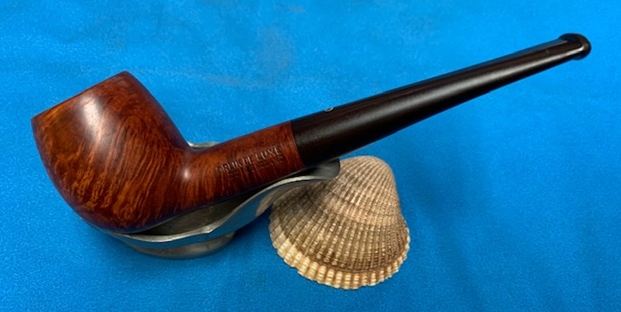 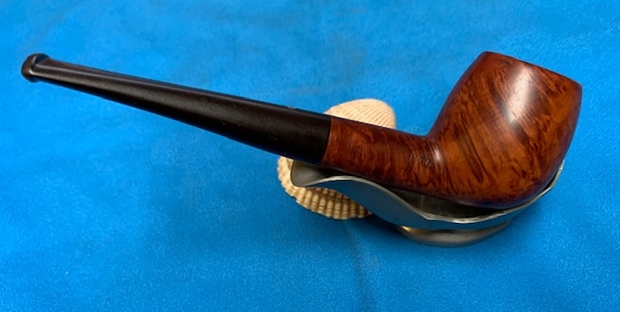 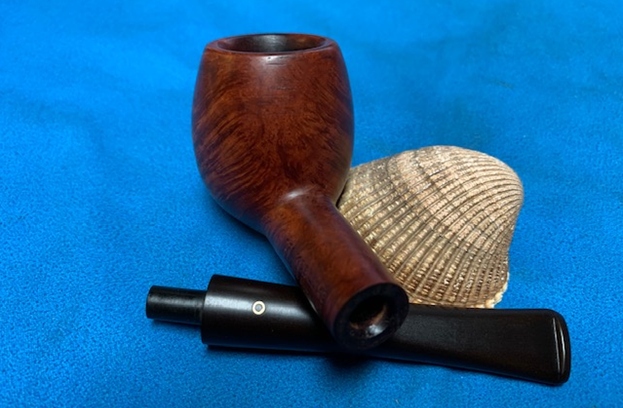