A fellow Vancouver Pipeman named Alex continues to keep me busy with working on the pipes he is picking up. He has picked up some interesting American and English made pipes. The next of those pipes is the final one for this batch. It is an American Made sandblast Pot. It is quite a stunning pipe with rugged sandblast around the bowl. From what I can see it is a flawless piece of briar. The grain is mixed which lends itself to a beautiful sandblast finish. The pipe is stamped on the underside of the shank on a smooth panel and begins with the shape number 69S on the heel of the bowl. That is followed by Heritage in a Germanic script [over] Antique. The bowl had a thick cake in it that overflowed as lava filling the sandblast on the rim top. It was hard to The finish was very dirty with grime and oils ground into the nooks and crannies of the sandblast on the bowl and shank. The vulcanite saddle stem is at one time would have had a double diamond on the left but the majority of the white fill was missing. The stem was oxidized and dirty with some light tooth marks on the top and underside ahead of the button. The button edges were in excellent condition. Here are some photos of the pipe when I first received it. 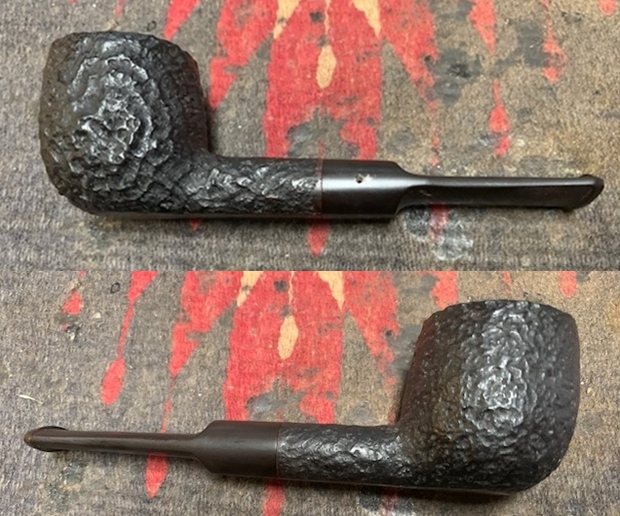 The stamping on the underside of the shank is shown in the photo below. It reads as noted above.

I removed the stem from the shank and took a photo of the flow of the pipe. The pipe was really going to look great once it was cleaned and polished.

I went back and read previous blogs I have written and others have written for rebornpipes on the Heritage brand of pipes. Andrew Selking did a great bit of research on the brand and did several blogs. I quote from his work at this link, https://rebornpipes.com/2014/12/23/refurbishing-a-heritage-heirloom/.

These pipes were made in the Kaywoodie factory, but on a completely separate line. Heritage pipes were Kaywoodie’s answer to Dunhill. According to one of their brochures, Heritage pipes were made from “briar burls seasoned and cured for up to 8 months,” with only “one briar bowl in over 300 selected to bear the Heritage name.” “Heritage stems are custom fitted with the finest hand finished Para Rubber stems. Mouthpieces are wafer thin and concave.”

The Heritage line began in the early 1960’s, with the trademark issued in 1964. The line was started at the request of Stephen Ogden, (who worked for Kaywoodie in 1962). Mr. Ogden had previous experience working for Dunhill, either running the New York store or working for Dunhill North America. Mr. Ogden was made President of Heritage Pi pes, Inc., Kaywoodie Tobacco Co. Inc. and Kaywoodie Products Inc. as well as a Vice President of S.M. Frank & Co. Heritage Pipes were produced from 1964 until 1970 (Source Kaywoodie.myfreeforum.org).

Andrew also included a copy of the Heritage brochure that I am also including below (Courtesy Kaywoodiemyfreeforum). On the third page I drew a rectangle around the 69S shaped pipe. The shape is described as a Large Pot and it is the one that I am working on. 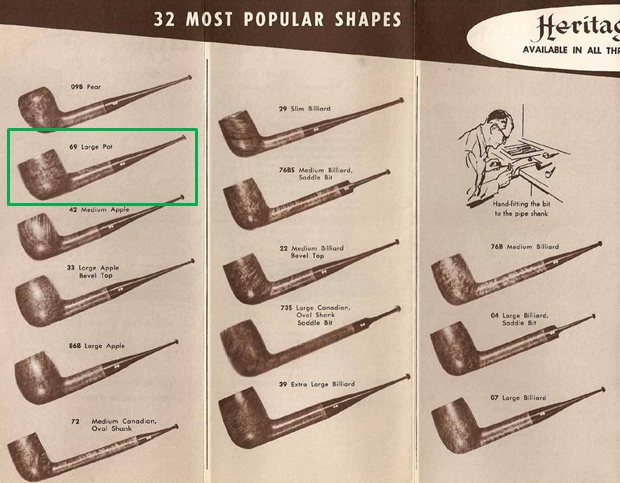 The brochure has a great write up on the Heritage Antique Line. It reads Rustic Grain Stands out in Rugged Relief. It describes the line as follows:

This pipe is so bold looking, yet so light and smooth smoking. A special sandblasting process exposes a greater surface area on the bowl, giving a cooler, more satisfying smoke. Centuries-old Heritage Antique is strikingly masculine in appearance.

I scrubbed the exterior of the bowl with a tooth brush and undiluted Murphy’s Oil Soap to get the grime and debris out of the briar. I rinsed it with running water and dried it off with a towel. With that the outside was clean… progress!

I cleaned out the mortise, shank in the briar and airway in the stem with pipe cleaners, cotton swabs and 99% isopropyl alcohol. The pipe was dirty with lots of tars and oils. 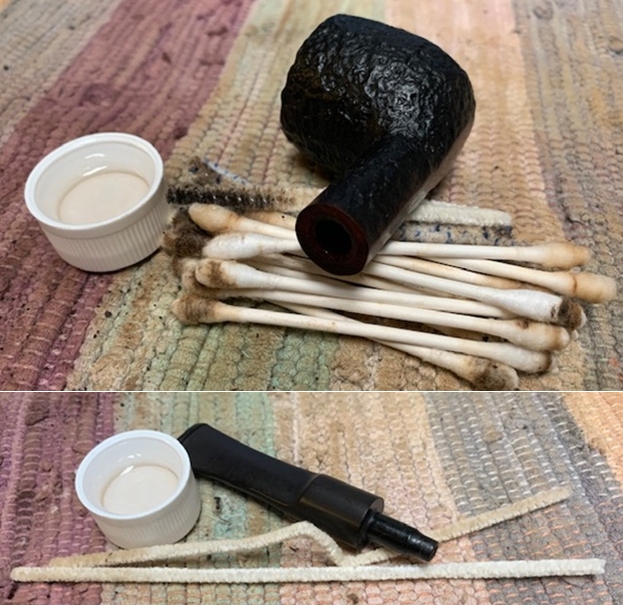 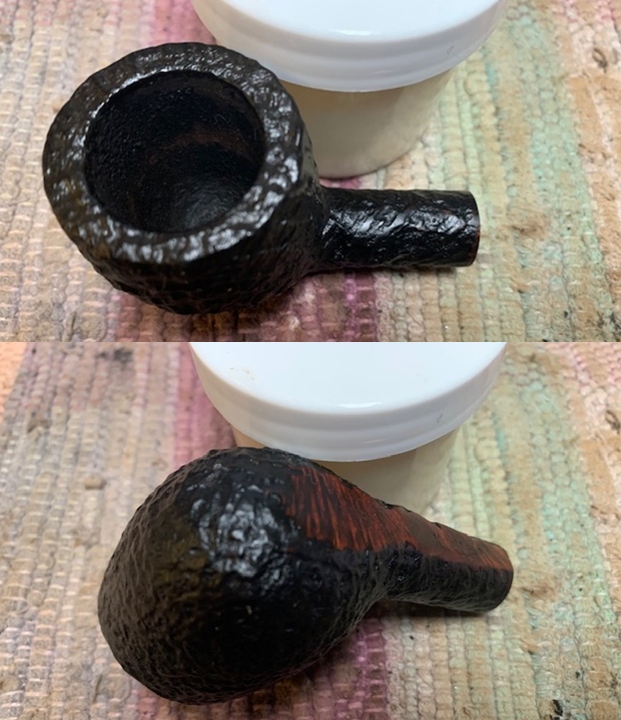 I set the bowl aside and turned my attention to the stem. I decided to address the missing double diamond logo on the left side of the stem. I filled it in with liquid paper pushing it down into the holes with a tooth pick. Once the white fill had dried I repeated the fill again to deal with the shrinkage. When the white had dried out I filled it in with clear super glue.  Once it cured I polished it off with 340 grit sandpaper and polished it with 400 grit wet dry sandpaper. 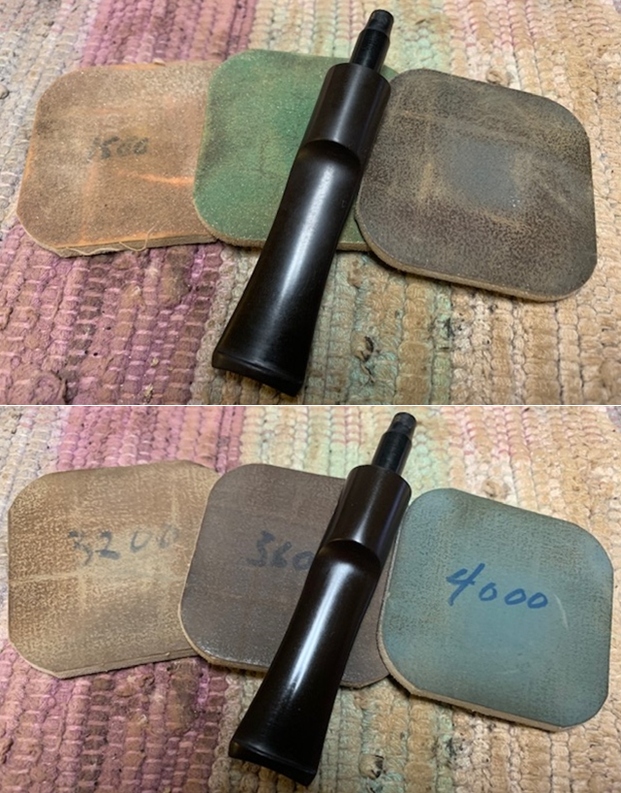 This Heritage Antique 69S Sandblast pot with a vulcanite saddle stem turned out to be an amazing looking pipe. The deep and rugged sandblast made the grain just rise to the surface in a lot of swirls and valleys. Everything about the pipe – the finish, the rim top and the cut of the briar work well to show off the shape and the blasted grain on the bowl and shank. I polished stem and the bowl lightly with Blue Diamond polish on the buffing wheel and the finish just popped and came alive. I gave the bowl multiple coats of Conservator’s Wax and the stem multiple coats of carnauba wax. I buffed the pipe with a clean buffing pad to raise the shine. I hand buffed it with a microfiber cloth to deepen the shine. The pipe polished up pretty nicely. The pipe took on life with the buffing. The rich dark brown/black finish works well with the polished vulcanite stem. The finished pipe has a rich look that is quite catching. Have a look at it with the photos below. The shape, finish and flow of the pipe and stem are very well done. The dimensions are Length: 5 ½ inches, Height: 1 ½ inches, Outside diameter of the bowl: 1 ½ inches, Chamber diameter: ¾ of an inch. The Heritage Antique Pot will back in the box of pipes that I am working on for Alex. I am looking forward to what he will think of this one. It is the last of the ones I currently have to work on at the moment. Thanks for walking through the restoration with me as I worked over another estate pipe. 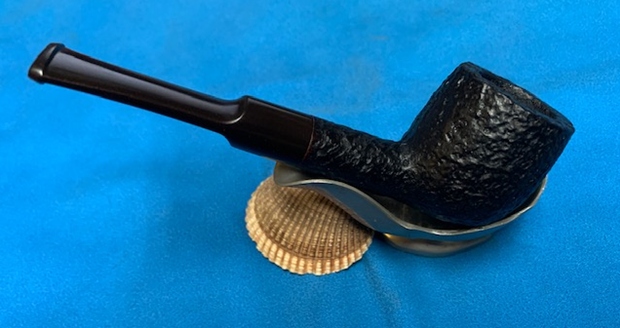 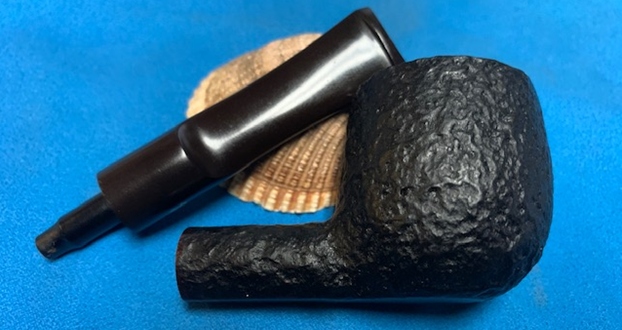 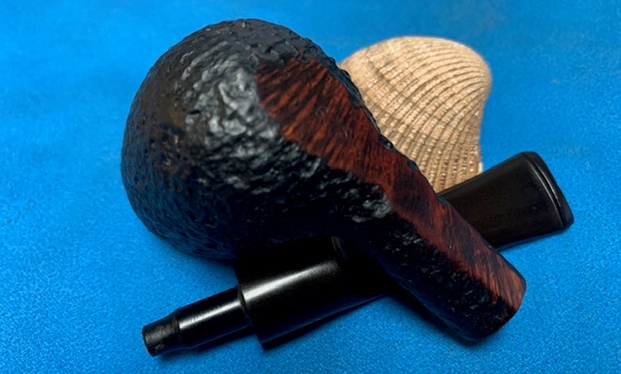 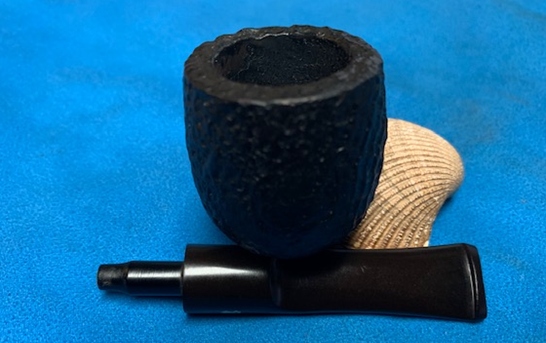