The next pipe in the queue is another one from the batch of pipes I am cleaning up for Alex – this one is another Schoenleber Hand Made – a petite straight shank Apple with some beautiful grain around what appears to be an oil cured bowl and shank. The entire pipe has some beautiful birdseye, straight and flame grain around the bowl and shank. The pipe was filthy with overflowing lava but the grain peaked out under the grime. The carver did a great job utilizing the block of briar to maximize the grain. The pipe is stamped on the left side of the shank. It reads Schoenleber over Hand Made. On the right side next to the bowl/shank junction there is a number 3 which is either a shape number or size designation. The tapered stem is vulcanite and has no marking or stamping. This is another nice looking piece much like many of the pipes Alex is picking up. The bowl has a thin cake inside the bowl but the tars cover the thin rim top and run down the sides of the bowl. There some darkening on the rim top. The exterior of the briar was dirty with grime and dust. The oxidized vulcanite stem tooth marks and chatter on both sides near the button. The photos below tell the story and give a glimpse of the pipe before clean up.

I took a photo of the bowl and rim to capture the condition of the pipe before I started my cleanup work. There was significant darkening and damage on the rim top and a thin cake in the bowl flowing over as lava on the thin top edge. The outer edge of the bowl appeared to be in good condition I would only be sure once I removed the lava. The stem was in decent condition under the thick oxidation and calcification on the surface. There was also some tooth chatter and tooth marks on both sides of the stem near the button. The button is also damaged by tooth marks.

I also took a photo of left side of the shank to show the stamping. The stamping is readable in the photo below and is as noted above – Schoenleber over Hand Made. On the opposite side there is a 3 at the shank/bowl junction.

I remember working on a Schoenleber pipe in the past and had a memory of the pipe being made for a shop in the New York area but could not remember much more than that. I quickly googled the brand to see what I could learn and found a link on Pipedia. Here is that link. I quote the article in full (https://pipedia.org/wiki/Schoenleber).

I reamed the bowl with a Savinelli Fitsall Pipe Knife to take the cake back to bare briar. The cake was thin but the lava over flow on the rim and down the bowl was heavy and dark. The rim top looked pitted and damaged. I sanded the internal walls of the bowl with 220 grit sandpaper wrapped around a piece of dowel.

The filthy exterior of this pipe was perfect for me to continue experimenting with a new product from Mark Hoover of Before & After Products. This one is a product he labels briar cleaner and it has the capacity of absorbing grime and dirt from the surface of briar. I rubbed the bowl down with some of his Briar Cleaner to see how it would work in this setting. In speaking to Mark he noted that the product is completely safe to use. The main product is even FDA approved edible. I rubbed it onto the bowl and rim top with my finger tips and worked it into the grime and grit on the bowl. I let it sit on the pipe for about 5 minutes before I rubbed it off with a microfibre cloth. I rinsed it under warm running water to remove the residue. I was pleasantly surprised by how clean the surface on the bowl looked when I was finished.

I turned to polishing the bowl and rim with micromesh sanding pads – wet sanding with 1500-12000 grit pads. I wiped the bowl down after each pad to remove the sanding debris. My goal was to further remove the darkening on the both the rim top and the first half inch of the bowl.

I worked some Before & After Restoration Balm into the surface of the briar with my fingertips to clean, enliven and protect it. I let the balm sit for a little while and then buffed with a cotton cloth to raise the shine. Mark Hoover’s Balm is a product that I have come to appreciate and one I use on every pipe I have been working on. 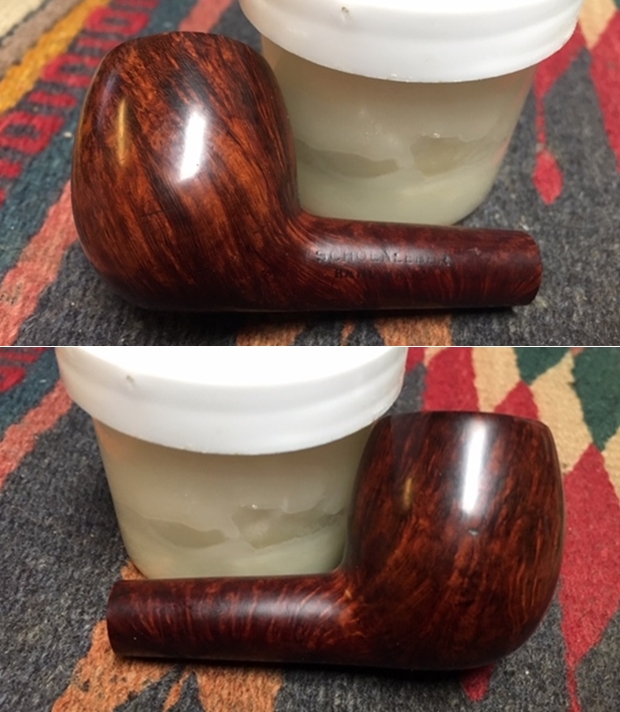 With the bowl finished I set it aside and turned my attention to the stem. I sanded it with 220 grit sandpaper to remove as much of the oxidation as possible. I was also able to remove much of the damage to the surface of the stem on each side. There was a remaining tooth mark on the top and underside of the stem. The button surface also had some tooth marks. I forgot to take photos of the stem after sanding and before repairing. I wiped the stem surface down with a damp cloth and then filled in the tooth marks with clear super glue. I also rebuilt the top and underside of the button surface with clear super glue. 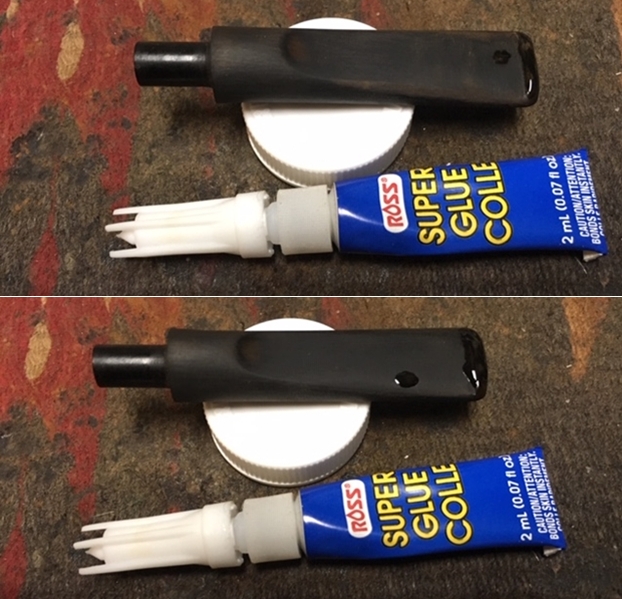 I polished the stem with micromesh sanding pads – wet sanding it with 1500-12000 grit pads. I wiped the stem down with a damp cloth after each pad. I further polished it with Before & After Pipe Polish – both Fine and Extra Fine. I wiped it down with a coat of Obsidian Oil and set it aside to dry. 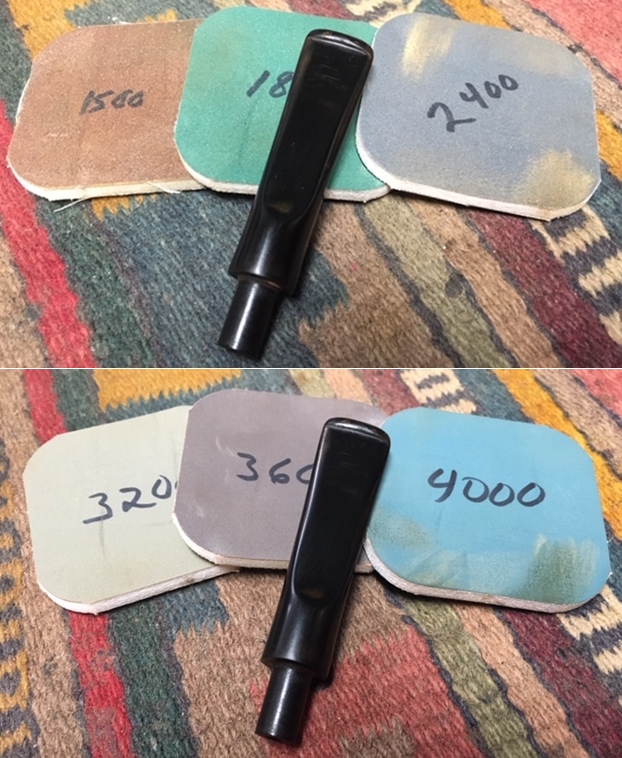 With both parts of the pipe finished, I polished the bowl and the stem with Blue Diamond polish on the buffing wheel. I gave the bowl and the stem multiple coats of carnauba wax. I buffed the pipe with a clean buffing pad to raise the shine. I hand buffed it with a microfiber cloth to deepen the shine. The pipe polished up pretty nicely. The rich finish and the grain came alive with the buffing. The finish on the briar works well with the polished black vulcanite stem. The finished pipe is a well-proportioned, nicely grained Classic Apple. Have a look at it with the photos below. The dimensions are Length: 5 inches, Height: 1 1/2 inches, Outside diameter of the bowl: 1 inch, Chamber diameter: 3/4 of an inch. This Schoenleber Hand Made Classic Straight Apple will be going back to Alex soon to join his growing collection of American made pipes. Thanks for walking through the restoration with me on another of Alex’s pipes. 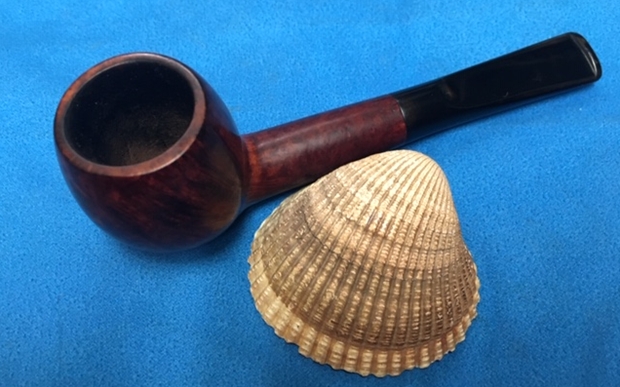 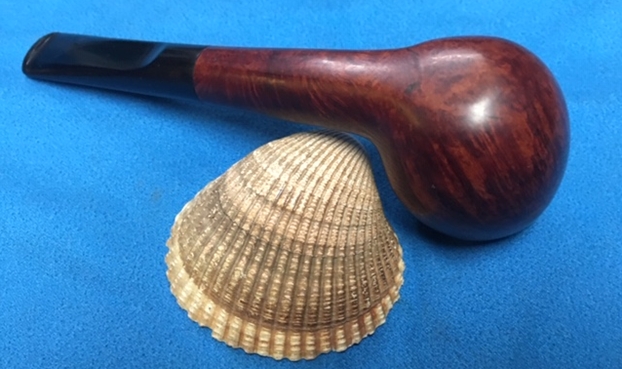 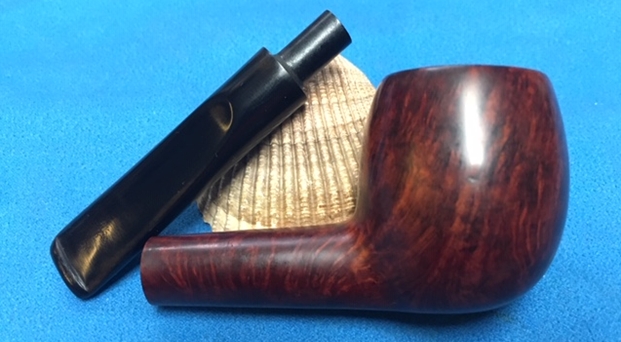 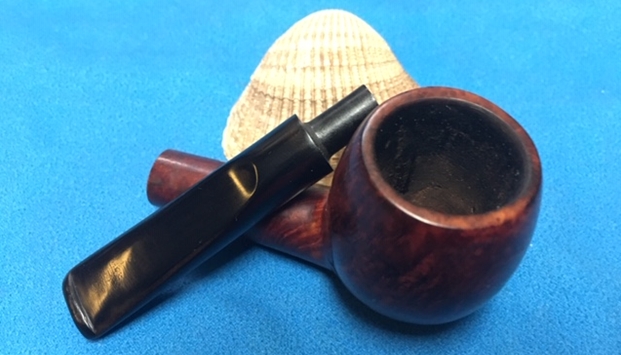 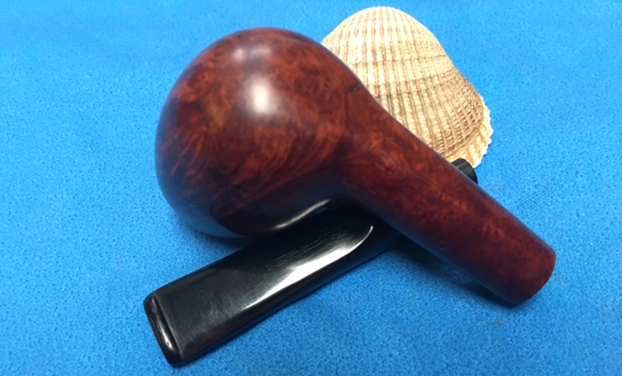 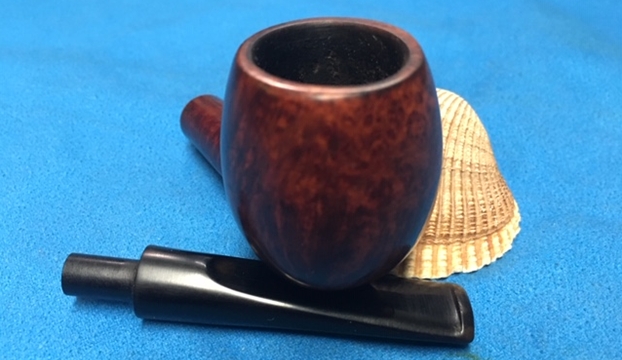