I was given a batch of pipes from a friend on one of the forums that he had lying around a long time. He was pretty certain that they were not worth much but he thought they might be fun for me to fiddle with. One of them was a meerschaum apple-shaped pipe with a plastic stem. The draw on it was awful, like sucking air through a coffee stirrer. The bowl had a few issues at first glance. There were some gouges in the meer on the sides of the bowl and the shank. There were some small cracks in the shank from the end forward near the top. There was a Delrin sleeve so these may or may not be a problem. The tenon itself was small and rough. The stem had some damage from what appeared to be melting at some point in its life. But it was barely smoked and there was something about it that caught my eye. I could see some promise in it so it would be worth the fiddle. 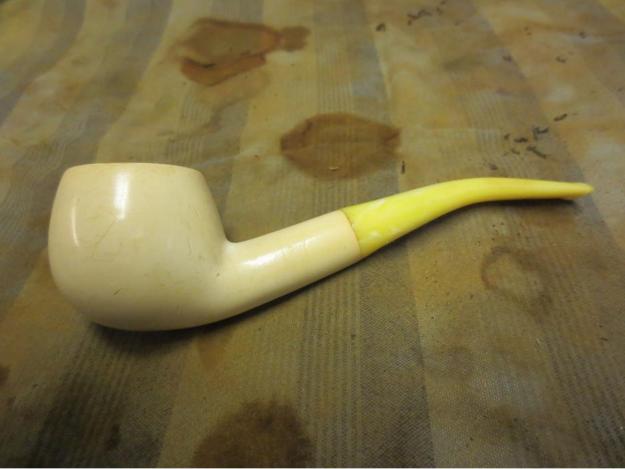 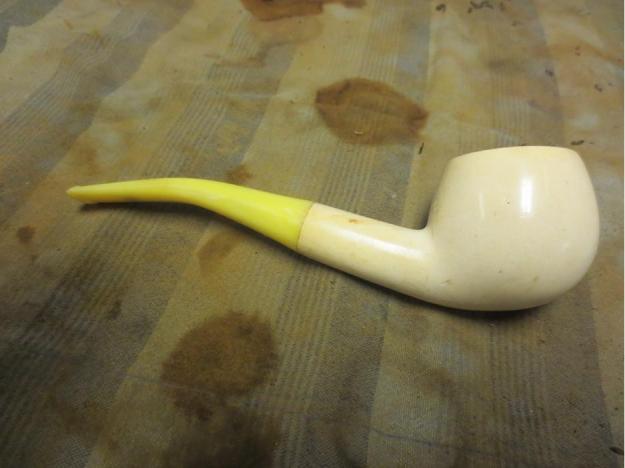 On the bottom of the exterior of the bowl there looked like there was a crack that ran for the length of the bowl. I examined it with a lens and it turned out to be a gouge in the surface of the meerschaum. It may be a crack but it did not go deep in the material so it was salvageable. 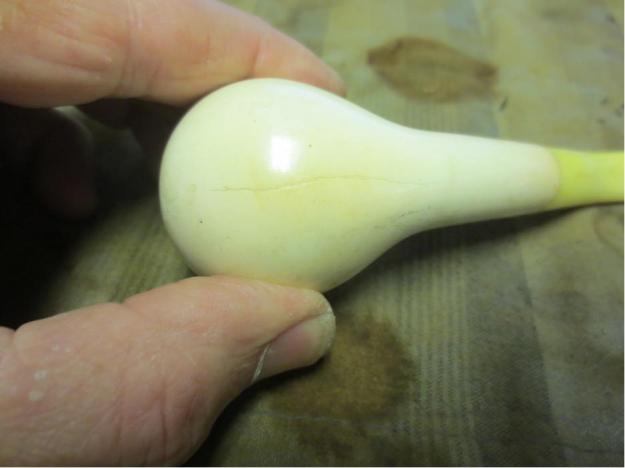 I took a close-up photo of top and inside of the bowl. You can see that it is barely smoked and the crack does not appear to go into the bowl.

The plastic stem just bugged me. I could find nothing redeeming in the shape of it at all. The taper was wrong and it was pinched at the shank joint. The faux amber look of it was really fake looking. The material was very soft and I could scratch it with a fingernail.

Everything about the way the pipe looked when it arrived made me think it would be one that I would clean up, polish and turn around and get rid of. I probably would not sell it but would pass it on to someone wanting a meerschaum pipe. I cleaned the inside of the bowl with a cotton swab and water. I cleaned out the airway in the shank and stem with cotton swabs, pipe cleaners and alcohol. I had finished the cleaning and had lightly sanded the bowl with 400 and 600 grit sandpaper to minimize the scratches and dings in it. I was done with the pipe and took it to the buffer to lightly polish the stem and bowl.

It has been a long time since a pipe got away from me when buffing but this one did. The Blue Diamond polishing wheel is a bit touchy and it grabbed the plastic stem and took the pipe out of my hand. It hit the tile floor right in front of the buffer and the stem snapped off at the shank. The tenon was stuck in the shank and the other end was glued in the stem. I was very fortunate as the pipe hit directly on the stem and not on the meer bowl or it might have been ruined. As it was it meant I had a good excuse to throw away the plastic stem and make a vulcanite one. I pulled the tenon out of the shank with a screw. It came out easily. I tried to pull the glued end out of the stem but putting in a screw and heating the screw but the glue held. I put the stem away and went on a hunt in my stem can for a suitable vulcanite stem for the pipe.

I found just the right donor stem. It was a bent round stem that came from an old-timer somewhere along the way. It was thick and the diameter was close to that of the shank. I took the tenon down with the Dremel and sanding drum and finish it by hand with sandpaper to make a snug fit in the Delrin sleeve in the shank. I used the Dremel and sanding drum to take off the excess diameter of the stem and then hand sanded it with 220 grit sandpaper to make the shank and stem match. While I was working on it I examined the two small cracks in the shank. They bothered me. While they would not go anywhere as the Delrin sleeve was glued and held them together, they still bothered me. I used a small micro drill bit on the Dremel and put a hole in the end of both cracks on the shank. I put a drop of super glue in the holes to seal them. I then remembered that I had some brass plumbing pressure fittings that make interesting bands. I heated the brass with a lighter and pressed it onto the shank to cover the cracks and give the pipe a little more bling.

I finished shaping and fitting the stem and took the photos below to give an idea of what the pipe would look like when finished. The bend in the stem is a little too much at this point and I would need to take some of the bend out. The bowl looks good with the brass fitting and the stem length works with this bowl. 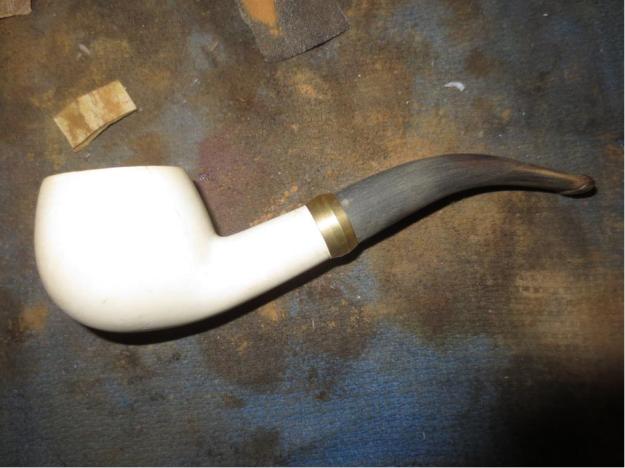 I was able to sand out the gouge on the bottom of the bowl and it looks smooth and fresh now. I will need to sand the entire bowl with micromesh to polish the meerschaum and give it a shine. 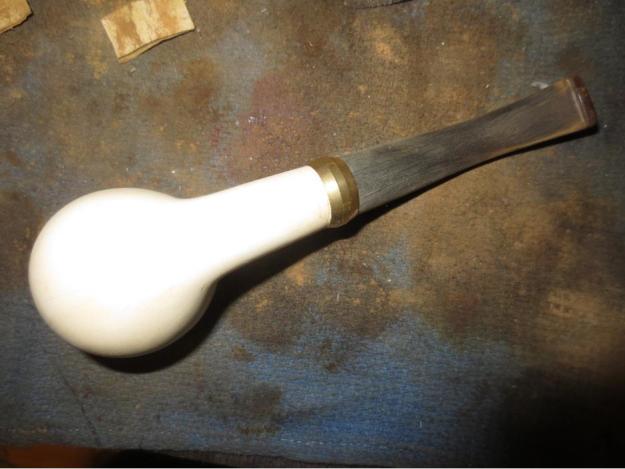 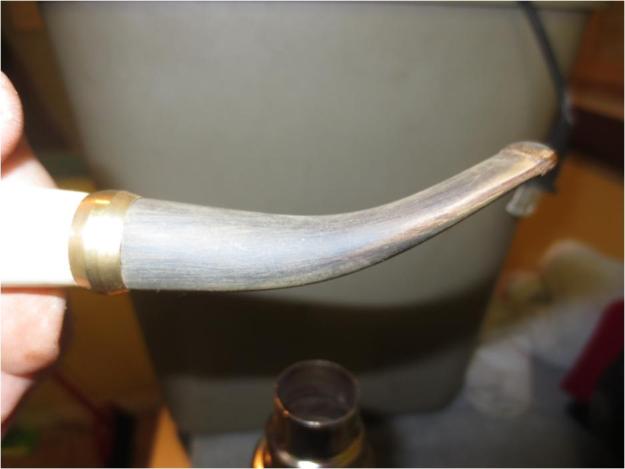 I sanded the stem with a medium and a fine grit sanding sponge to take out the scratches and work on the oxidation that was deep in the edges of the button. 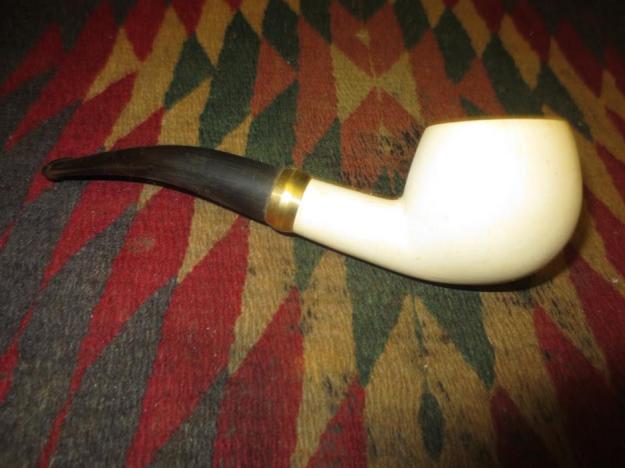 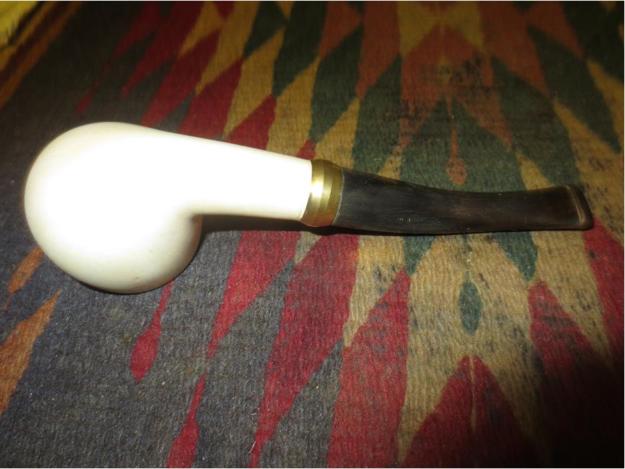 I sanded the bowl and shank with 3200-4000 grit micromesh sanding pads to minimize the scratches. 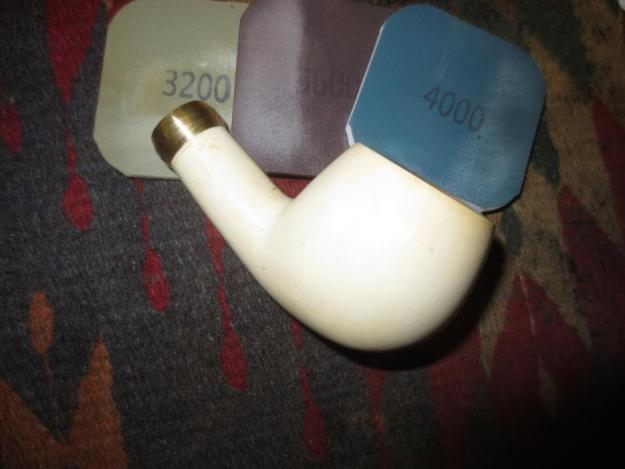 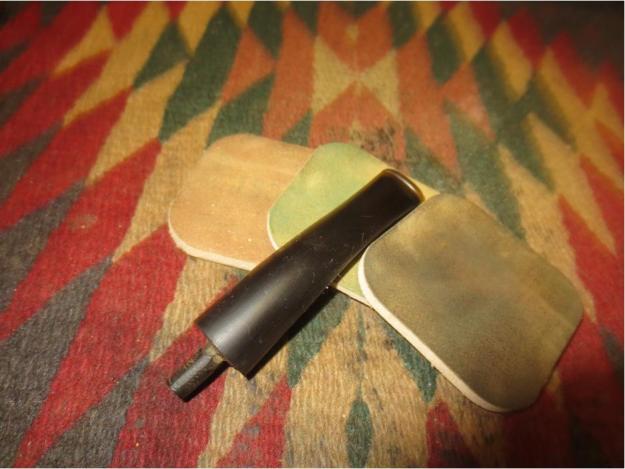 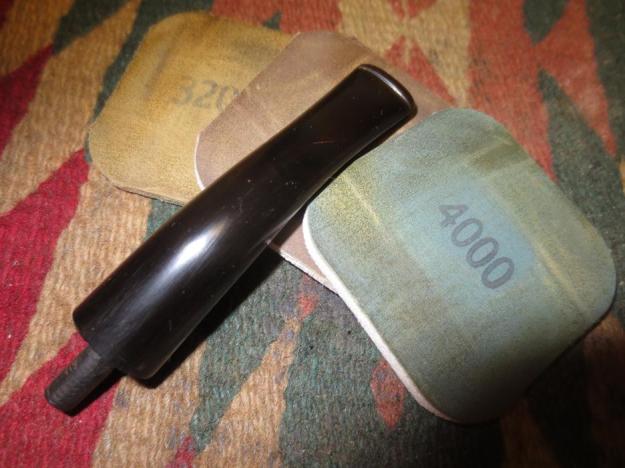 I buffed the bowl and stem with Blue Diamond Plastic polish on the wheel and then gave the stem several coats of carnauba wax. I gave the bowl two coats of white beeswax and the buffed it as well. I buffed both with a clean flannel buff and then by hand with a microfibre cloth. The finished pipe is shown in the photos below. 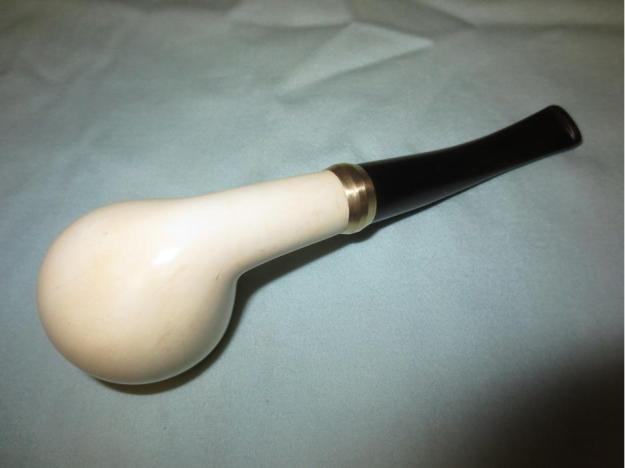 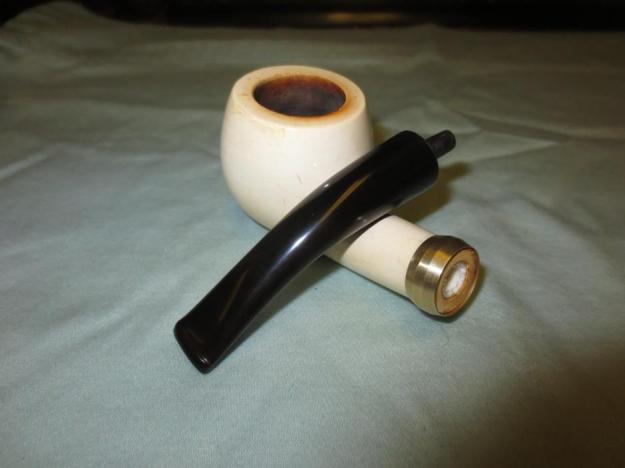