Marxman is a great older American Pipe Company and they had some beautiful pipes made for them. These are two great examples. Thanks also for the brochures Troy.

This Sunday i thought i would break out a couple of my old Marxman’s and smoke them . I figured that  since i got them out i would take some pictures and share them.

This apple was my first Marxman . I picked it up off Ebay and instantly fell in love with its looks . It was very lightly smoked and all original . Luckily for me the seller listed it under Markman instead of Marxman so i won the bid with little effort . All i did was give it a light cleaning and wax to preserve it .

It has taken on a darker warmer color and patina from smoking since i acquired it .

I can honestly say its the best smoking apple shape i have .

The only stamping on the pipe is the Marxman logo with imported brair under it .

I’ve been out of touch for the past few months, between moving, home renovation, and finding a new job my free time has been limited. Dave is sneaky though, he sent a picture of a pipe he bought and asked me if I thought I could fix it. Of course I said yes. Here is the pipe as it looked upon arrival. There is an obvious chunk missing from the button, but there is also a small crack on the other side of the stem. That was uglier than it looks. 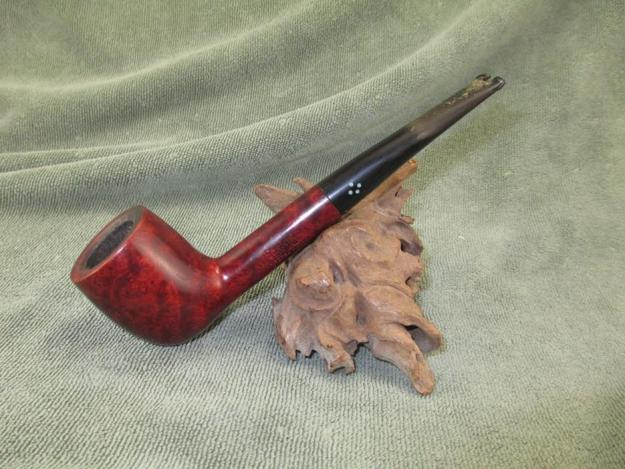 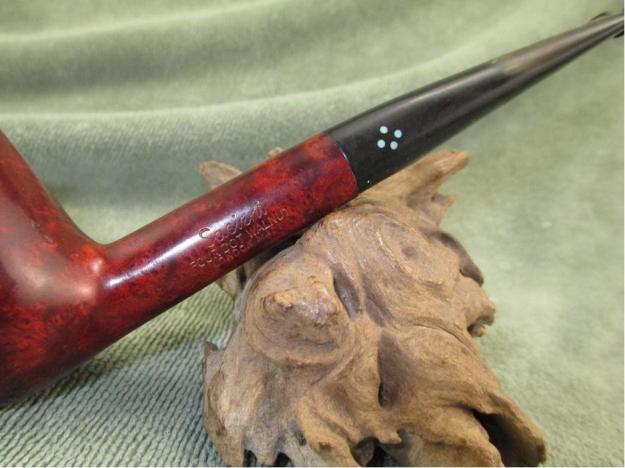 I did my normal procedure of cleaning the inside of the pipe first. Dave was kind of worried about how the alcohol might affect the finish, so I used new alcohol and only left the bowl in for about 45 minutes. I soaked the stem in an Oxyclean bath.

The tar on the rim came right off after removal from the alcohol bath. Next I reamed the pipe using my Castleford reamer, used a brush on the inside of the shank, followed by a retort of the bowl. As I suspected the pipe was pretty clean. 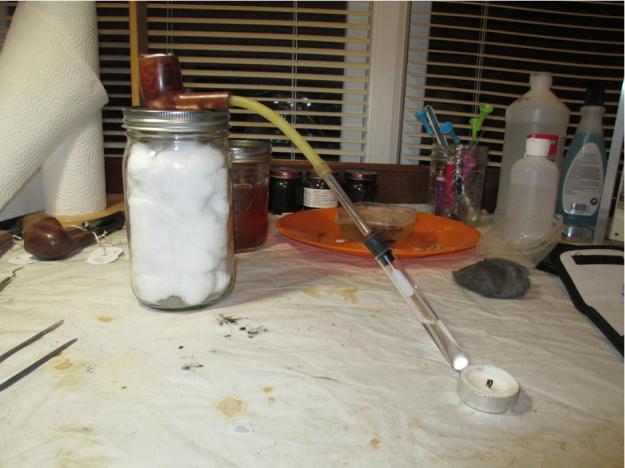 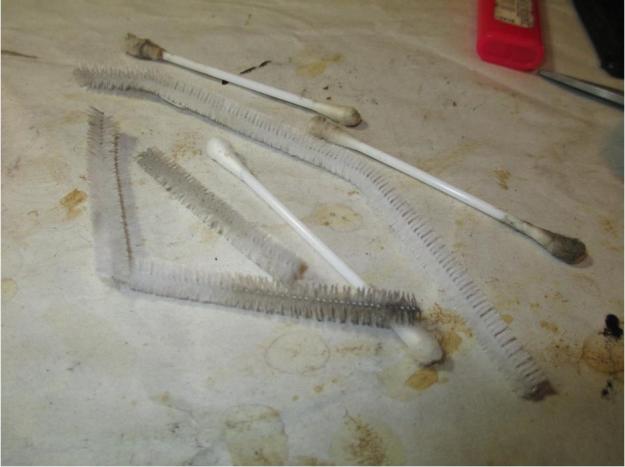 Before dumping out the Oxyclean, I ran a pipe cleaner through the stem. It was not too dirty. I followed that by a retort and more pipe cleaners. That was the easy part, the fun was about to begin. 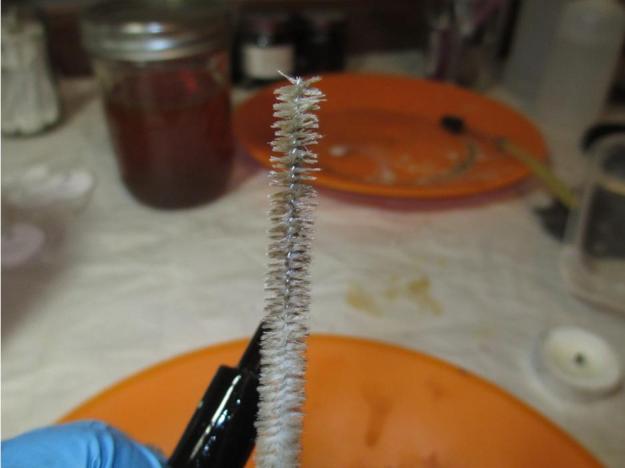 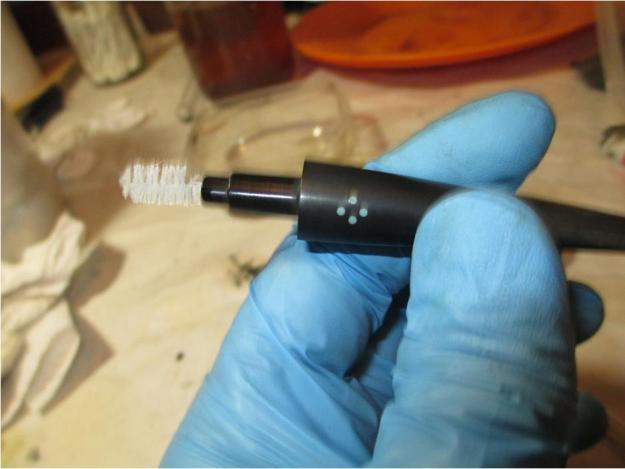 As you can see the missing chunk is a problem. The crack on the other side looked like it could keep going, so I drilled a hole to stop it. You might notice a slight micro crack to left of the main crack. Turns out there was a chunk of vulcanite hanging on like a loose tooth. Of course it came out very easily, leaving a stem that was missing most of the button on both sides. 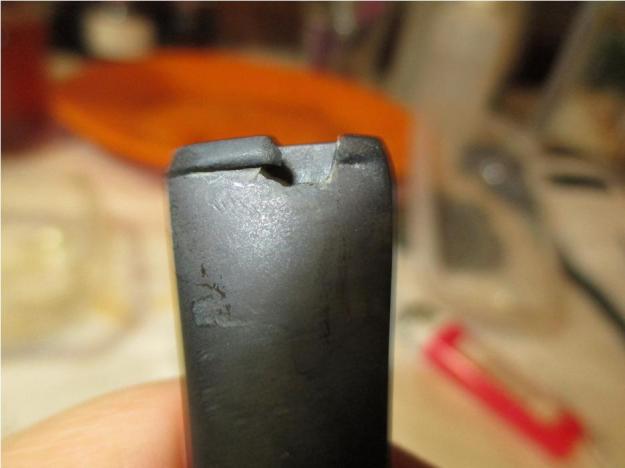 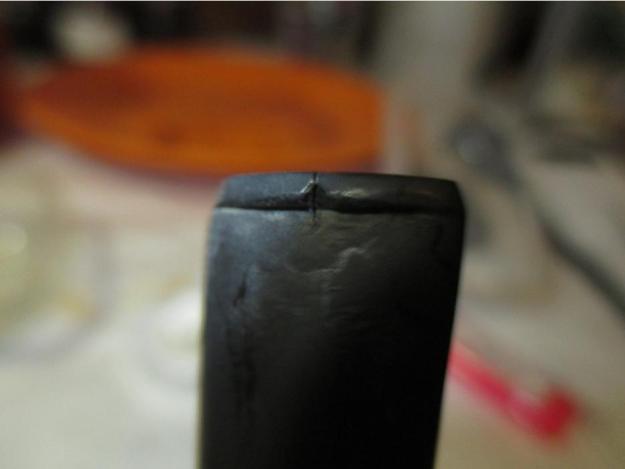 The first thing I do when building a new stem is fit some rolled up wax paper inside the stem. I’ve found that the CA glue does not stick to it and it helps give shape to the inside of the stem. I use ground charcoal (which I purchased at the pet store and ran through a coffee grinder and sifter) and CA glue. I started by filling in the hole that I drilled to stop the crack. Once I had that filled in and sanded smooth, I started building up the stem below the button. I forgot to mention that I use CA accelerator throughout the process. I find that you can work the glue within 2 to 3 minutes instead of having to wait overnight. 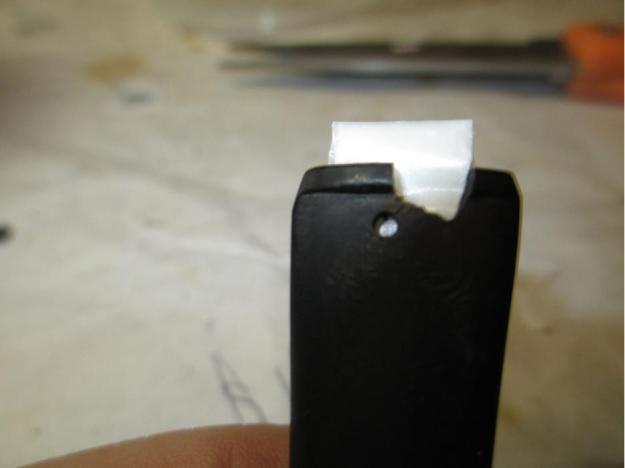 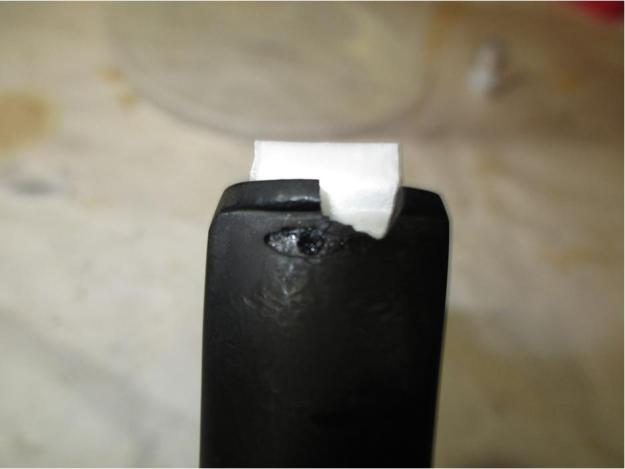 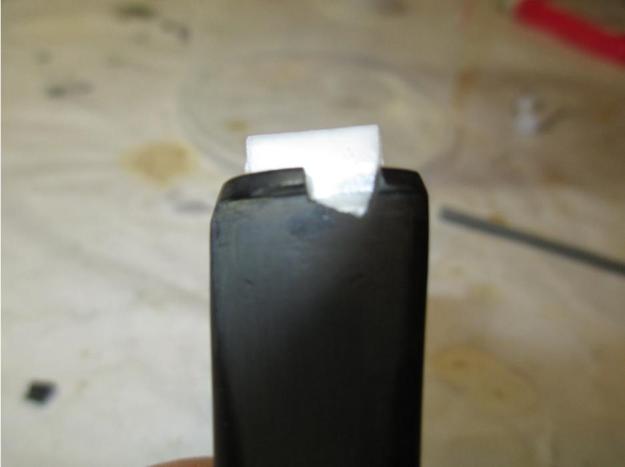 Once the stem was repaired, I put layers of clear tape on the stem under the button to serve as a form for the glue. Once the tape was even with the button, I started adding CA glue and charcoal. I put a small amount of charcoal on the bottom of a plastic cup, add a drop or two of CA glue and mix it with a push pin. I use the push pin to add the material to the stem, followed by a few drops of accelerator. Once the material is built up, I start to sand and file it into shape. I use needle files and 400 grit sand paper. This gets me to the final step, which is addressing the micro pits. 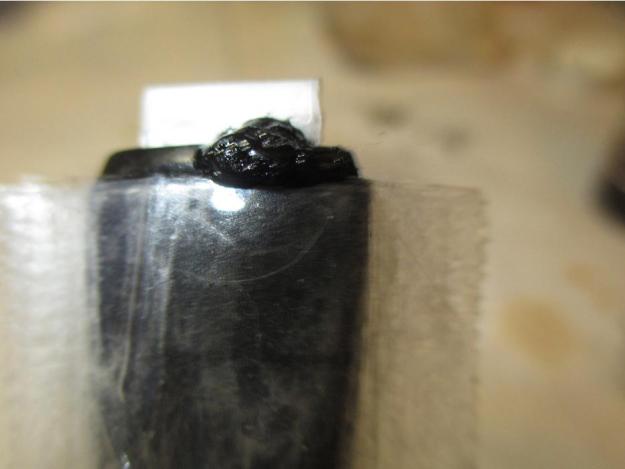 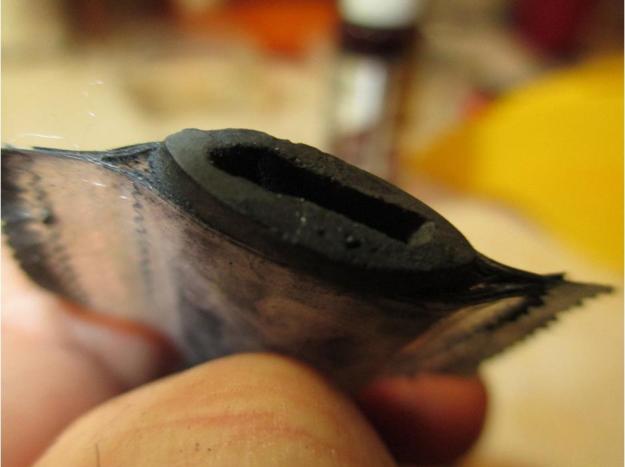 I filled the micro pits with a mixture of CA and charcoal, but used much less charcoal than before. I used 400 grit sandpaper and needle files to get the final shape. I then used 1500-2400 grit micro mesh with water to smooth it all out. Since the bowl was in nice condition and I wanted to preserve the finish, I started polishing with 3200 grit micro mesh. I used a progression of 3200-12,000 grit micro mesh on both the bowl and the stem. Here is what it looked like once it was ready for the buffer. 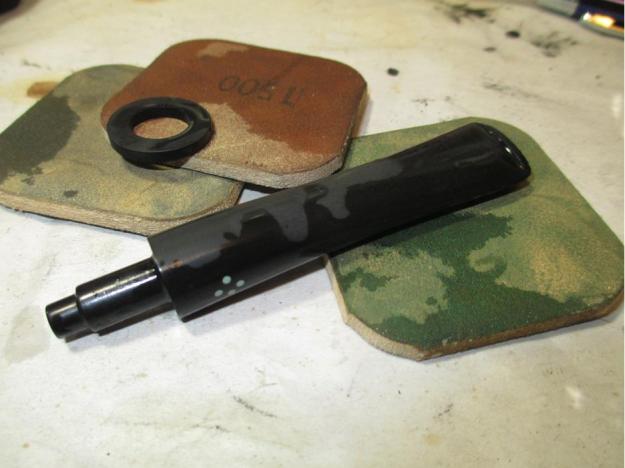 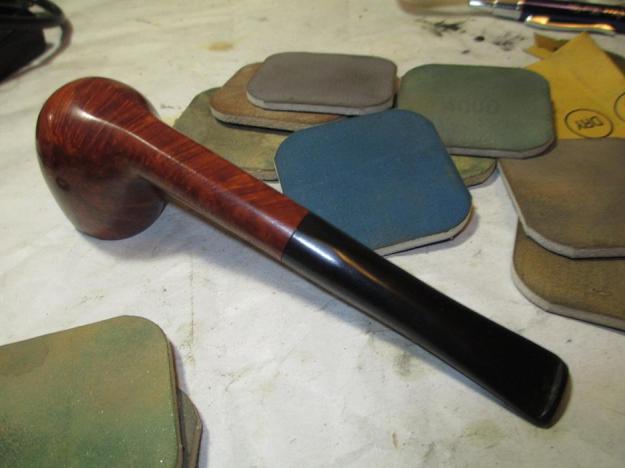 I polished the stem using my rotary tool with a felt pad and white diamond, followed by carnauba wax. My rotary tool has variable speed and I use the lowest setting. I used white diamond and carnauba wax on the bowl with the buffing wheel. Here is what the pipe looked like when I finished. This is my second repair of this type. My ultimate goal is to do repairs that look like the original. Thanks for looking. 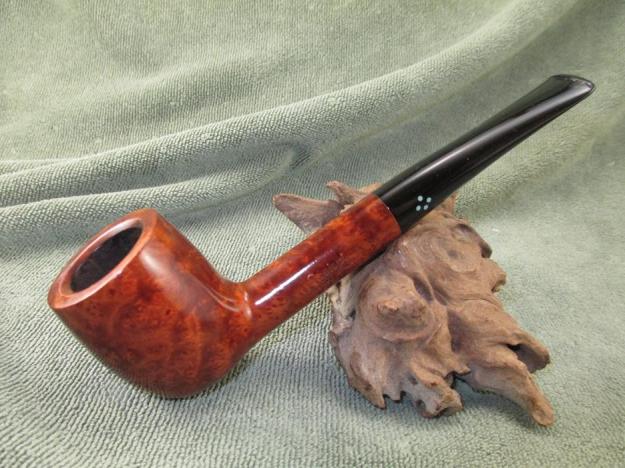 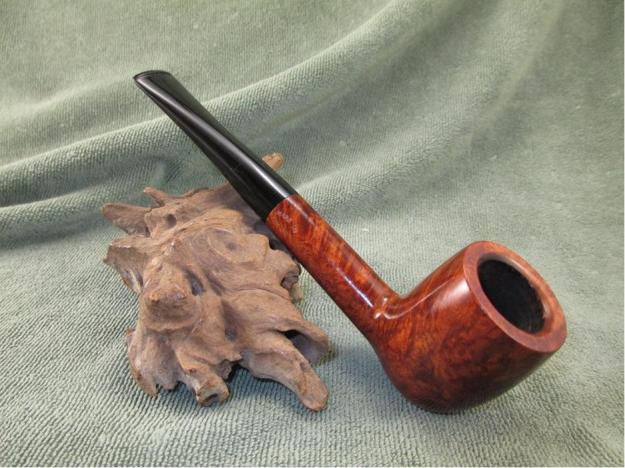 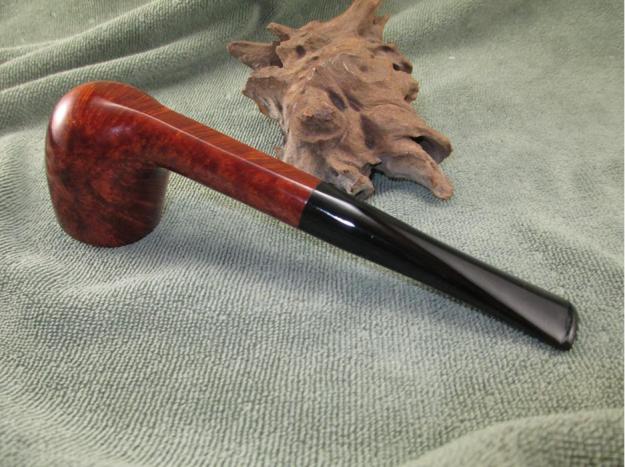 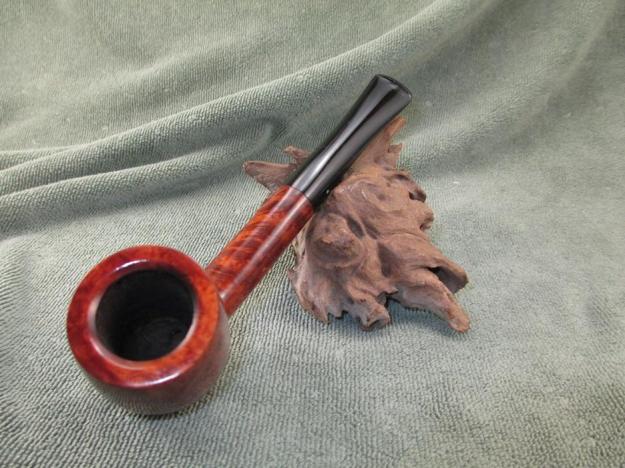 Troy posted this and I thought it would be a good addition to the information on rebornpipes. I have used a similar bowl coating but used sourcream as the base instead of maple syrup. Works well.

This is a repost of a article  i found on

I really like this  simple and easy bowl coating and thought i would share it. I believe simple is always the best way if it is at all possible in anything .

Pipe makers and restorers use various types of bowl coatings for a variety of reasons. Some coatings are factory-applied to new pipes in the belief that they help protect the briar wood of the bowl from burnouts and assist in the formation of cake – that even layer of hard ashy stuff that insulates the briar from the heat of the burning tobacco. Sometimes a bowl coating is used to repair a cracked or otherwise damaged pipe bowl. And some pipers are dead set against bowl coatings of any kind, arguing that they stop the briar from “breathing” and thus…

I purchased this KB&B Yello Bole off Ebay .

I was looking for another 07 billiard as i own a couple and very much like the large bowl, the way they smoke  and classic shape of them . This one was listed as a four digit (2807) with the “Honey Cured Briar ” stamping , which made it a pre 1936 Yello Bole .
I thought ,excellent !  I did not have a early four digit 07 as of yet .

Here is one of the Ebay pictures ,

The pipe looked in excellent condition for its age but i did notice a couple of odd things about it . The band was wider than normal and after looking up the 28 two digit code it should have been stained dark . From the other pics of the pipe that was on the listing the grain was very bland and…

Troy started a Blog on refurbishing. This is one of his posts and it is well done. If you enjoy his work then you will want to follow this blog as well. Good job Troy.

I was sent this hard to find LHS poker as a gift from Fletch . He is a fellow member of the Dr.Grabow Collectors Forum ,

He picked up the pipe in a lot he acquired at the Kansas City pipe show not long back . He knew i was looking for a LHS Poker and was kind enough to think of me .

Upon arrival i was happy to see it was a larger poker at just a hair under two inches tall. The bowl was in very nice shape with just some minor dings and such . The stem needed some work though as a corner of it was missing from a previous owner chewing on it . The LHS bar emblem was missing on the stem also .

I knew fixed and cleaned this would be a really nice poker .

The pipe did not have much…

To paraphrase Samuel Clemmons, reports that I’m no longer messing with pipes are greatly exaggerated. Between a cross country move, a new house, renovations to said house, and trying to figure out what I want to be when I grow up, I have not spent as much time working on pipes as I would like. I did manage to squeeze in this nice Kaywoodie Flame Grain Meerschaum lined doggie.

According to a Kaywoodie brochure from the era, Flame Grain pipes were made from “200 to 400 year-old briar burls…the last of their kind to be found in the world.” The meerschaum inlaid Flame Grain is a “superb Flame Grain Kaywoodie with an inlaid inner bowl of imported Turkish meerschaum. This pipe combines the outstanding qualities of the two best materials in the world in which to smoke tobacco.” This pipe represents the pinnacle of American pipe making. As a point of reference, in 1947 this pipe would sell for $12.50 while Dunhill pipes started at $10.00.

As you can see, it took some imagination to see a pipe that might compete with a Dunhill. 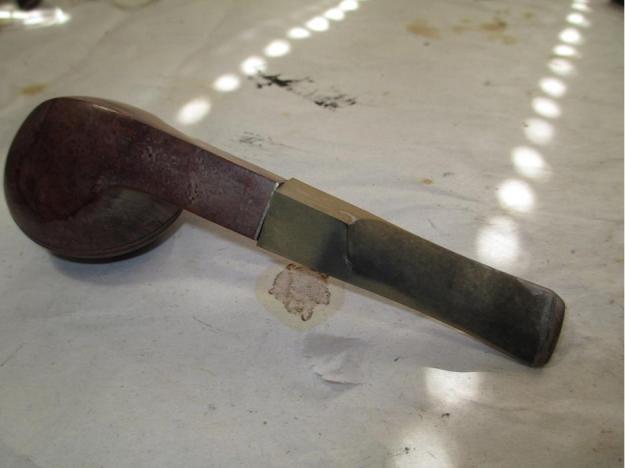 The stem was under-clocked and heavily oxidized. The bowl had very thick cake and a buildup of tar on the rim. There was some kind of protective finish on the bowl that left a film after the alcohol bath. Additionally, the stinger was cut. On the plus side, I could see some really nice grain and the stem was virtually unmolested.

The first thing I did was soak the bowl in alcohol. I was hesitant to do that, because I was afraid the alcohol would cause the meer lining to deteriorate. At the same time I was also worried that if I didn’t soften the cake first, just using the reamer might damage the lining as well. I compromised and soaked it for about two hours and the cake came out nicely.

While the bowl was soaking, I used Oxyclean and warm water to soak the stem. Since it was missing the end of the stinger, it was easy to get the worst of the gunk out with a pipe cleaner. As I mentioned, the stem was under-clocked. To fix this problem I usually heat the stinger with my heat gun until I can easily rotate back into place. As the tip of the stinger heats up it transfers heat into the stem and loosens the glue. The whole heat transfer thing wasn’t working very well with this pipe, so I stuck a small nail in the stinger.

Next I did a retort on the bowl and stem. 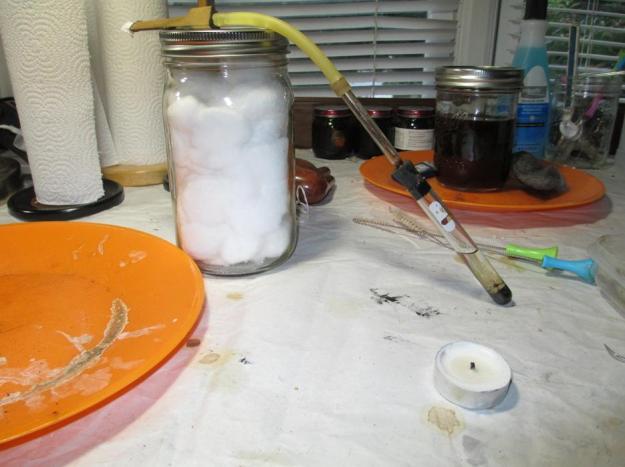 After scrubbing the insides with brushes, q-tips, and pipe cleaners, it was time to tackle the exterior issues. I used 0000 steel wool with acetone to remove the tar build up on the rim. 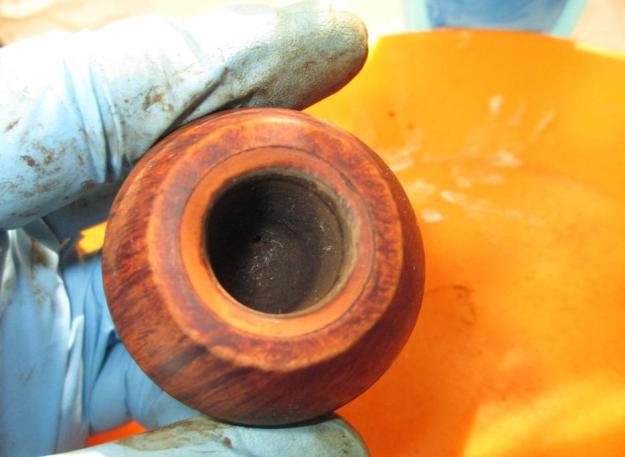 I continued with the 0000 steel wool over the rest of the bowl to remove the film on the finish. After cleaning the bowl, I used 3200-12000 grit micro mesh to polish the bowl. This is what it looked like afterwards.

I used 400 grit wet/dry with water to remove the oxidation from the stem, followed by 1800-2400 grit micro mesh with water. 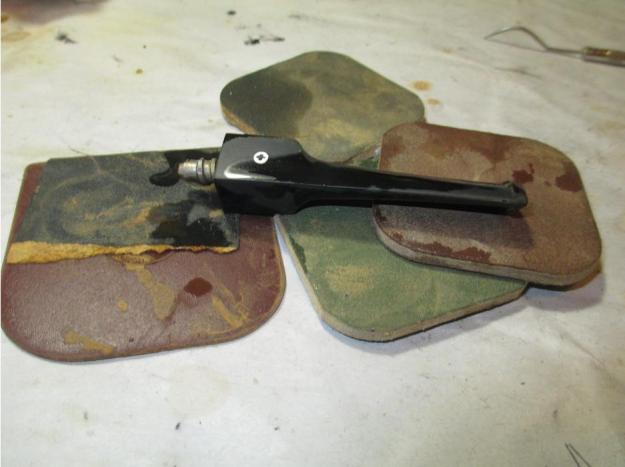 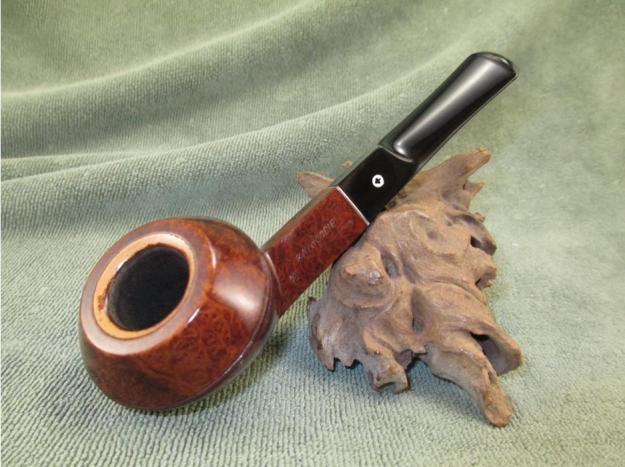