This bowl came to me with a batch of bowls needing different degrees of work. This old-timer needed cleaning as the buildup of grime and grit that was ground into the bowl was thick. The surface was coated with a greasy black substance all around the top of the bowl and the sides. The bowl/shank junction was incredibly grimy. The inner rim was out of round and the outer rim and the top of the rim were in rough shape. The outer edge had been hammered around the sides and the top had dents and cuts in the surface. The shank looked to be slightly shorter than I have come to expect on this shape of pipe; though the drilling and the mortise were original. The shank had definitely not been shortened. The bowl was caked and the buildup thickest around mid bowl. There were quite a few small pink fills around the bowl sides. There was no stamping or identifying marks on the pipe. There had been some sanding done around he shank and it had left behind some fairly deep scratches. 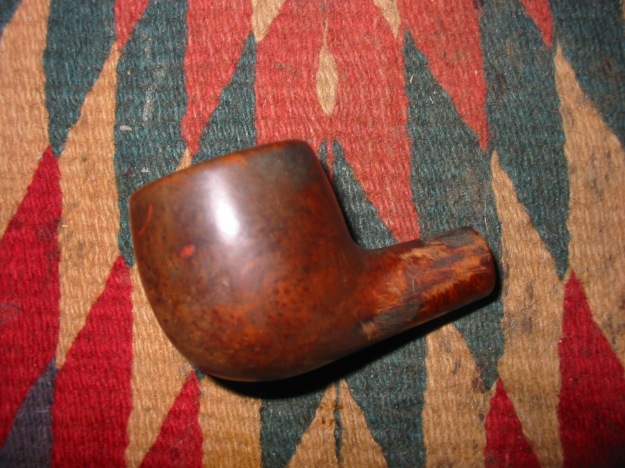 I went through my can of stems and found one that fit quite well. It did not need work on the tenon diameter as the fit was snug. The stem was bent and would need to be straightened to give it a proper fit to the bowl. Once the stem was in place it was clear that the shank was out of round. The bottom edge of the shank was somewhat thicker than the stem at the same spot. I would need to work on the flow of the shank from the bowl to the stem union to insure that the fit was smooth and the transition seamless.

The stem was badly oxidized so I figured heating it to straighten it would actually soften the oxidation and bring it to the surface. I used a heat gun on the low setting to heat the stem. I generally hold it about 4 or more inches above the heat source and hold so it bends in the correct direction as it softens. In this case it did not take long for the vulcanite to heat and the stem to return to the original straight position. I decided to leave a slight bend in the stem as I like the look of on the pipe.

The next two photos show the stem after heating and straightening. The variation in the diameter of the shank and the stem is also clearly visible in these two photos. 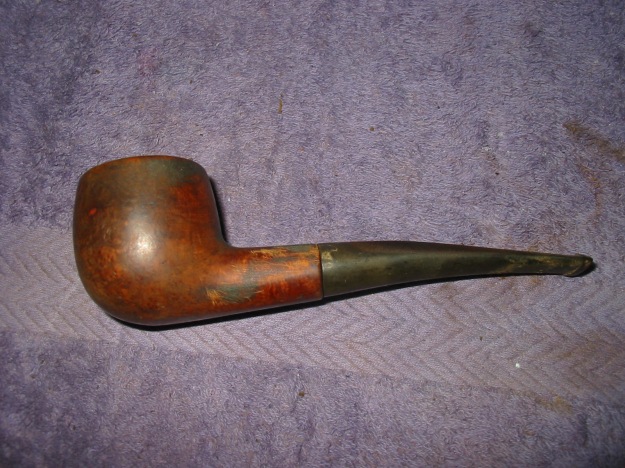 Since the shank had no stamping to preserve I decided to sand the shank and the stem to even things out and to bring the shank into round. I used 220 grit sandpaper to remove the excess briar and to shape the taper on the stem. I sanded the stem as well to remove the softened oxidation and make the cleanup simpler. 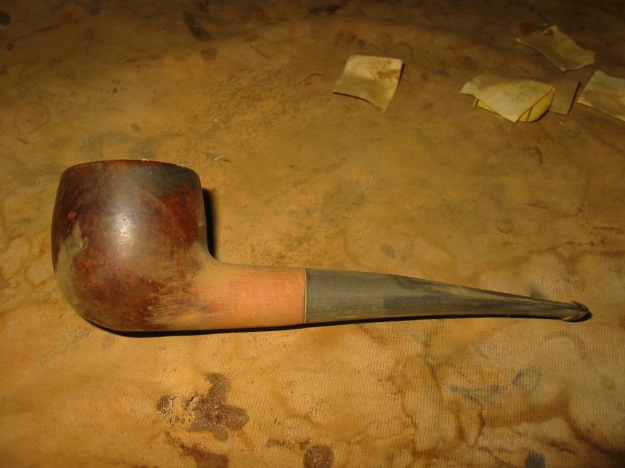 I set up a topping board and anchored a piece of 220 grit sandpaper on the surface to provide a flat straight surface to sand the top on. I twisted the top into the sandpaper in a clockwise motion to remove the tars and rim damage on the bowl. 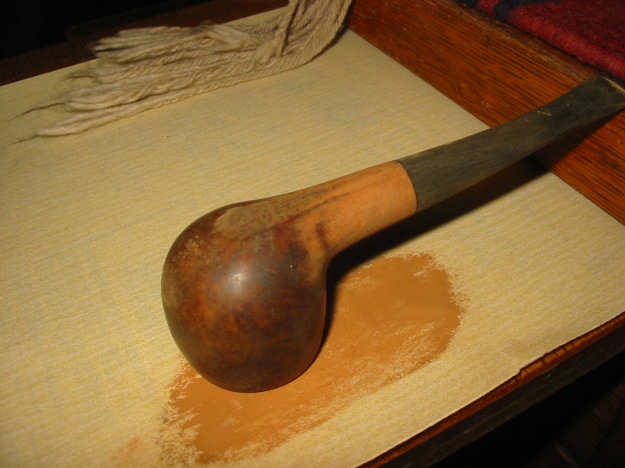 I wiped down the surface of the bowl with acetone on cotton pads to remove the grimy buildup on the finish. The black tarry substance took some elbow grease and hard scrubbing to remove. The inner rim would need some work to bring it back into round but that would wait until after I reamed the pipe.

I sanded the bowl with 220 grit sandpaper and medium and fine grit sanding sponges to further remove the finish and the grime. I worked on the inner edge of the rim with a folded piece of 220 grit sandpaper to bevel the inner edge into the bowl. This minimizes the appearance of the bowl being out of round. It also removes burn damage and smooths the look of the rim as a whole. 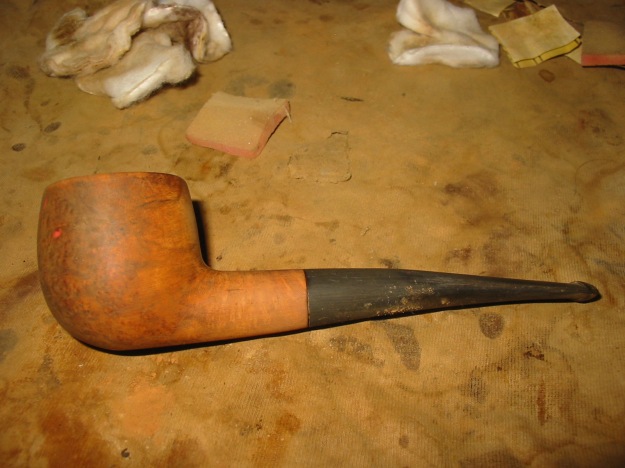 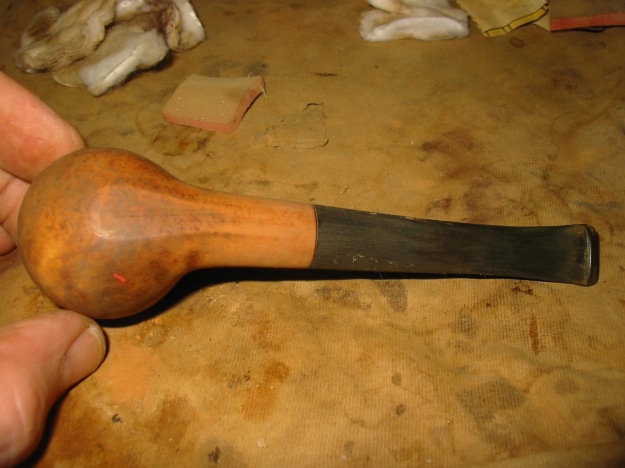 I decided to try something different on this bowl in terms of stain. It had some great cross grain and some nice birdseye grain that I wanted to highlight. It also had some ugly pink fills that I did not want to pick out and refill. This led me to try a black aniline stain. Before I stained it I used a black permanent marker – a sharpie to line through the pink fills. I blended them into the grain of the wood with the pen. I heated the bowl with the heat gun to open the grain and then applied several coats of black aniline stain, flaming the stain between each application. Once the stain was dry I wiped the bowl down with isopropyl alcohol on cotton pads and then sanded the bowl with a medium grit sanding block. I wanted to remove the black stain from the higher/harder areas of the briar while leaving it in the grain patterns. 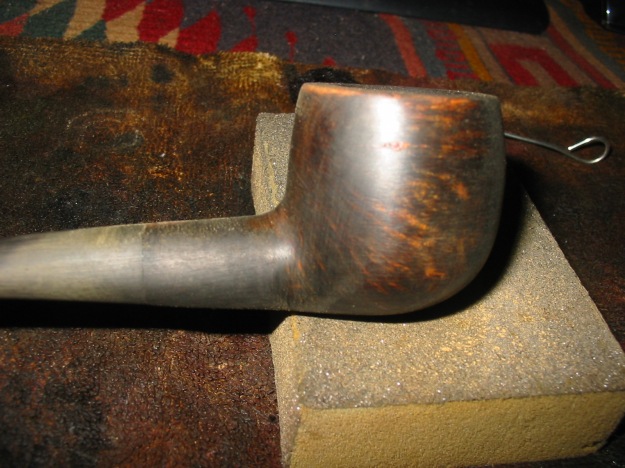 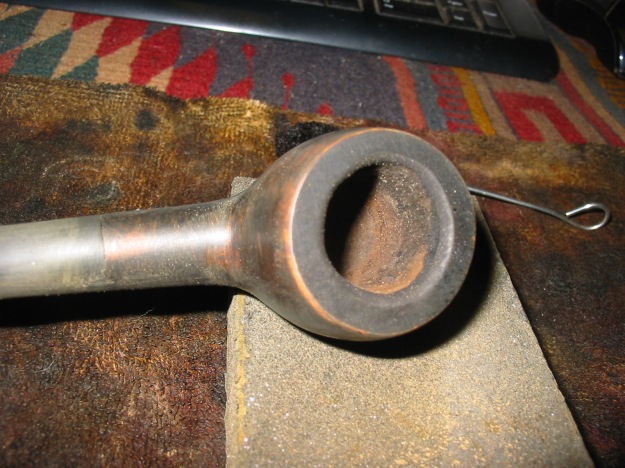 I sanded the bowl with a medium grit sanding sponge and then wiped it down with isopropyl alcohol to remove the dust. I remarked the fills with the black Sharpie. In the four photos below the marked fills are visible and the finish has about all the black removed that I wanted to take off. 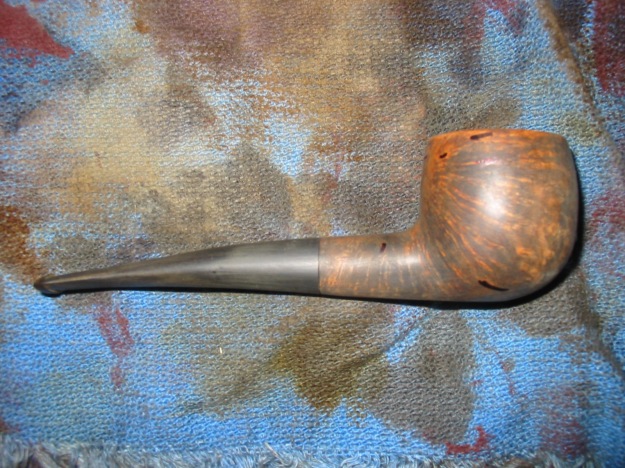 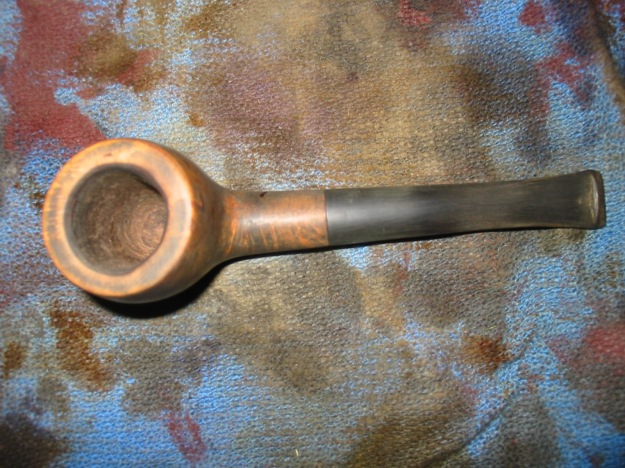 I rubbed the bowl down with Olive oil on a paper towel and rubbed it into the finish. I sanded the bowl with micromesh sanding pads – 1500-2400 grit, while the oil was wet as the oil gives the pads a bit more bite. I worked on the marked areas to blend them in with the sanding pads. I also sanded the stem with the micromesh sanding pads and the Olive oil at the same time. The next four photos show the finish after it had dried over night. I then buffed it on my buffer with White Diamond and gave the bowl several coats of carnauba wax. You can see how well the black sharpie blended into the finish. The pink fills have all but disappeared in the finish.

I sanded the stem with my usual array of micromesh – the difference this time was all pads were used to dry sand the stem – 1500-12,000 grit. In between each grit I rubbed the stem down with Obsidian Oil and rubbed it into the vulcanite before sanding with the next grit pad. Once I had finished with all grits I gave the stem a final rub down with the Obsidian Oil. 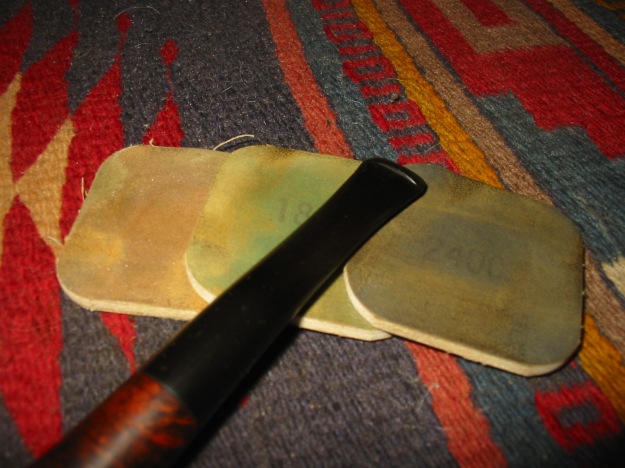 I gave the pipe several more coats of carnauba wax on the buffer and then buffed it with a soft flannel buff to bring out the shine. I was aiming for a stem shape similar to what I had seen on the Castello 55 shape and wanted that slight bend downward in the final look. While the pipe is certainly no Castello, I like the final look of the stem and the bowl. It certainly has come a long way from the bowl that came in the lot I received in the mail. This one should make a good addition to someone’s rack once it leaves here. The next four photos show the finished pipe. 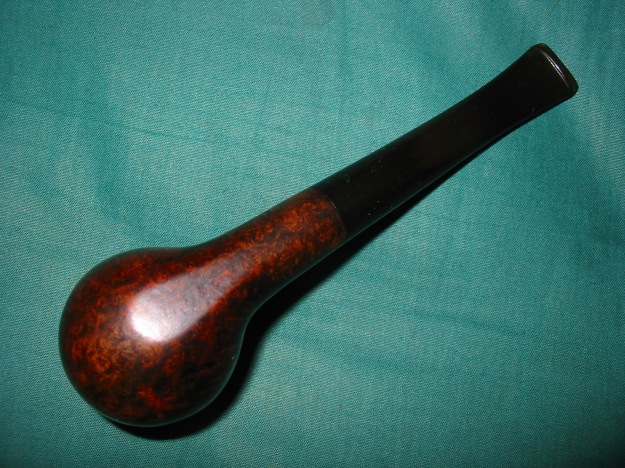