Andrew sent me this old pipe as a bit of a challenge and I thought I would give it a go. This was a great looking pipe at one point in its life – nice grain. It is stamped GBD in the oval on the top of the shank with LONDON MADE in an arc under the oval. That leads me to believe the line is the LONDON MADE rather than the location. On the underside of the shank it is stamped: LONDON ENGLAND over D256. The 256 is the correct shape for an oval shank Canadian but I had not seen the D stamping before a number on GBD pipes.

The finish was rough and there was split in the back side of the bowl that ran horizontally in an arc across the bowl about ½ inches from the top. It was as if the grain had separated that way across the back of the bowl. It follows the arc of the grain in that part of the briar. From the main split there was a tiny crack branching off into another line of grain on the left side of the bowl. The weird thing about the split is that it was only external. There was no sign of it inside the bowl after removing the thin cake. The stem was not with the pipe so it would need to be restemmed. I found an old saddle stem in my can of stems that would work for this pipe after I modified it. 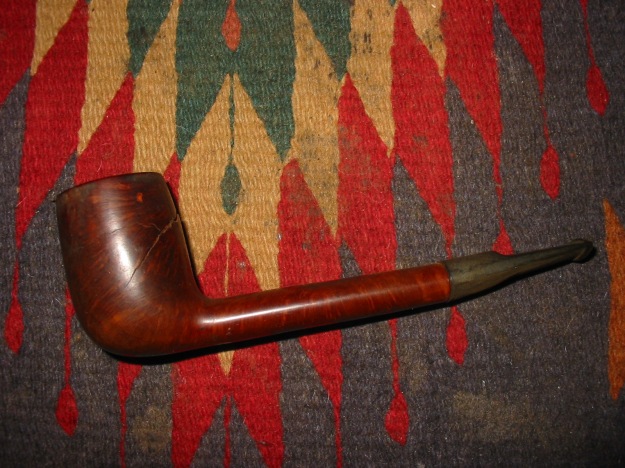 In talking on the phone with Tim West last evening while I was ordering parts for repairs I discussed this pipe with him. He said that in his estimation the crack being only on the outside of the bowl suggested that the issue was a moisture problem.

I shaped the stem with a Dremel and a sanding drum. I removed the saddle on the stem and converted it into a taper shape and also narrowed it to fit the dimensions of the oval shank. The next four photos show the newly fit stem and the rough shaping that I did with the Dremel. All that remained in the stem fit was a lot of hand sanding! 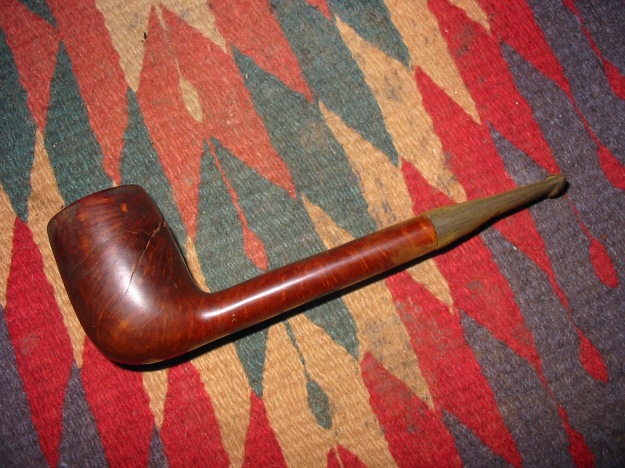 I reamed the bowl with a PipNet reamer to remove the existing cake and to check the interior walls of the bowl. They were not cracked as noted above. I washed down the pipe with acetone on cotton pads to remove the grime and the finish in preparation for doing the repair on the cracks. I picked out the debris in the cracks with a dental pick and cleaned out the sides and interior of the cracks. I washed that part of the bowl down a final time with acetone to clear away any debris left behind by my picking at it.

I packed briar dust into the cracks with a dental pick and then dripped super glue on top of the briar dust to bond it and make a fill for the crack. The next series of photos show the repair at this point from various angles.

Once the glue was dry and the patches were solid I sanded the patch with 220 grit sandpaper to smooth it out to match the surface of the bowl. I sanded it with medium and fine grit sanding sponges afterward to smooth it out further. The next photos show the initial sanding of the patches. There was still much sanding to do and some more filling in spots that were low. 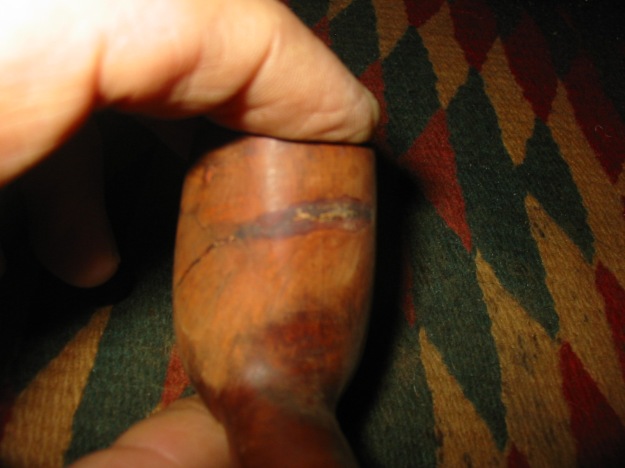 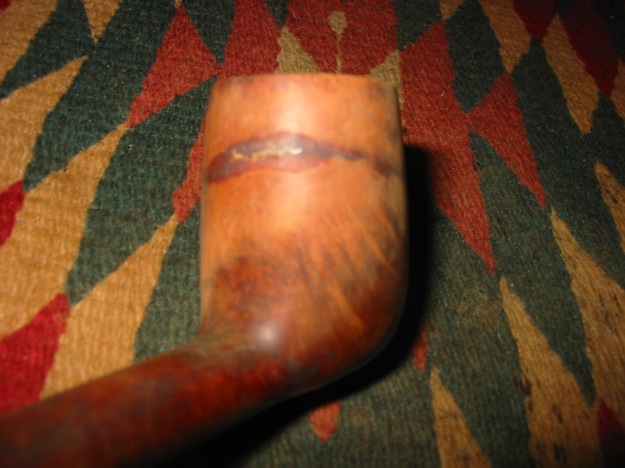 The next series of three photos show the newly sanded repair. It looks better but there are still a few areas that will need to be filled and sanded some more. 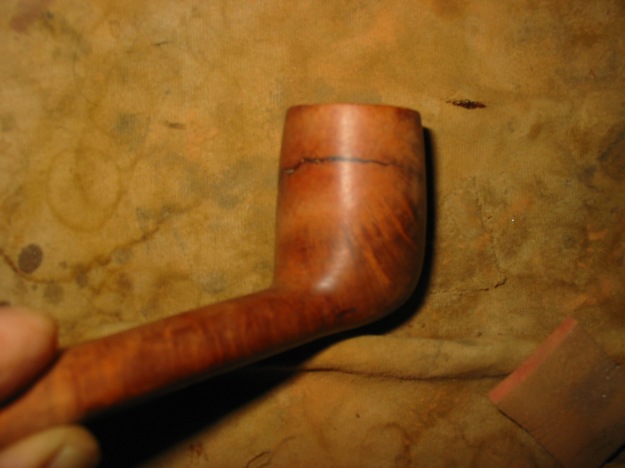 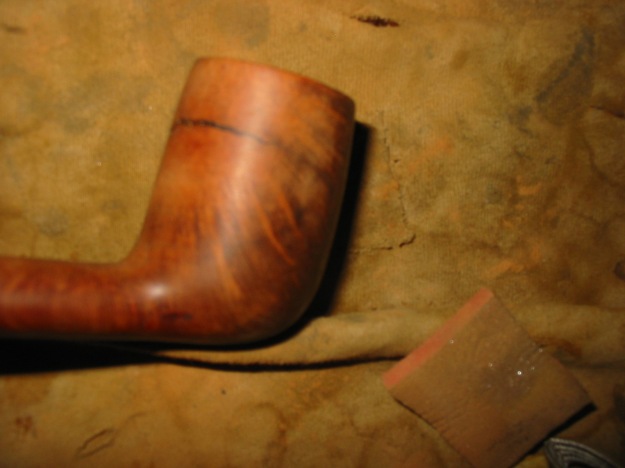 At this point in the process I was still undecided as to whether I would stain the repaired bowl or rusticate it. I posted on an online forum to see what others thought and the audience was split. I decided to stain it and see how the repair looked. If I changed my mind I could rusticate it later. I wanted to use a contrast stain on the bowl to minimize the look of the crack so I used a black aniline stain to do the undercoat. It would also highlight any areas on the repair that needed more attention. I applied the stain, flamed it and did the same again until the coverage I was looking for was achieved.

I took three photos of the repair after staining to show what the repair looked like at this point.

When the stain was dry I wiped it down with isopropyl alcohol to lighten it and bring out the grain. I wanted the black stain to settle into the grain and highlight the stripes. I wiped it down with acetone as well to further lighten the stain. I buffed the pipe with red Tripoli and White Diamond to further lighten the black undercoat. I stained it with a top coat of dark brown aniline stain, flamed and restained it for the coverage I wanted. It must be remembered at this point that this was not the finish coat but merely the way in which the repair is highlighted and makes it clear where I still need to do some work on the fills. The photos below show the repair and make it very clear where there was still work to do. This meant more filling of the crack with briar dust and superglue and more sanding. It also meant that I would need to restain that particular area of the pipe 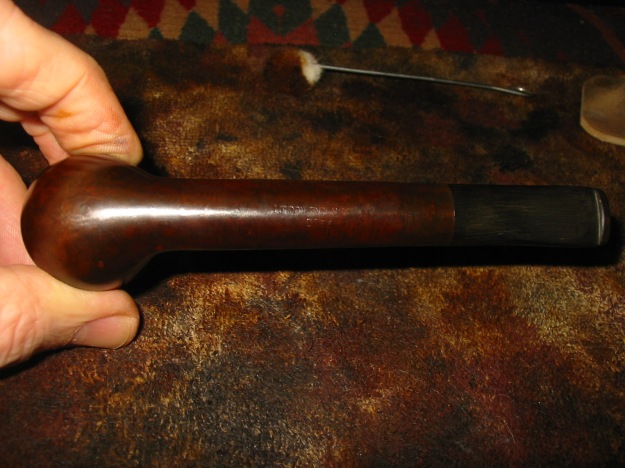 Once the pipe was at this point several things stood out to me. I really like the grain patterns on the bowl and shank and I need to continue to work on the patch until it was well blended. So I took it to the buffer and buffed it with White Diamond and then took it back to the work table to do some more work on the patch.I sanded down the area around the repair with 220 grit sandpaper and then packed in more briar dust with the dental pick. I added more superglue until the repair was mounded slightly. While this would take more work in terms of sanding, I knew it would make the patch as perfect as possible.

Once I had the patch sanded back to match the surface of the surrounding briar with the 220 grit sandpaper, I sanded it further with medium and fine grit sanding sponges and then with 1500-2400 grit micromesh sanding pads. The scrathes left behind by the sandpapers disappeared with the micromesh sanding. I restained the area with the black undercoat, sanded it again and then gave it a topcoat of dark brown aniline stain a second time. I did not bother sanding and restaining the whole pipe as my plan was to sand the entire bowl to create the contrast I wanted with the two stains. I sanded the pipe with 1500-2400 grit micromesh sanding pads to blend in the freshly stained portion of the pipe with the rest. The next three photos show the status of the repair at this point.

I continued to sand the bowl and shank being careful around the stamping on the top and bottom of the shank with the micromesh sanding pads until the top stain was almost translucent. I wanted the top coat to be there but I wanted the grain to pop through it. I also wanted the colour to blend in such a way that the dark repair would not be hidden completely but would be minimized. The next four photos show the pipe after all of the sanding and a buff with White Diamond to enhance the shine.

I worked on the stem to remove several small tooth marks on the underside and one on the topside of the stem. I then sanded the stem with 220 grit sandpaper to further shape it and get the flow of the taper just right. I sanded it with medium and fine grit sanding sponges and then used my normal range of micromesh sanding pads to finish the work. I wet sanded with 1500-2400 grit and then dry sanded with 3200-12,000 grit pads. I rubbed the stem down with Obsidian Oil and let it soak into the vulcanite. 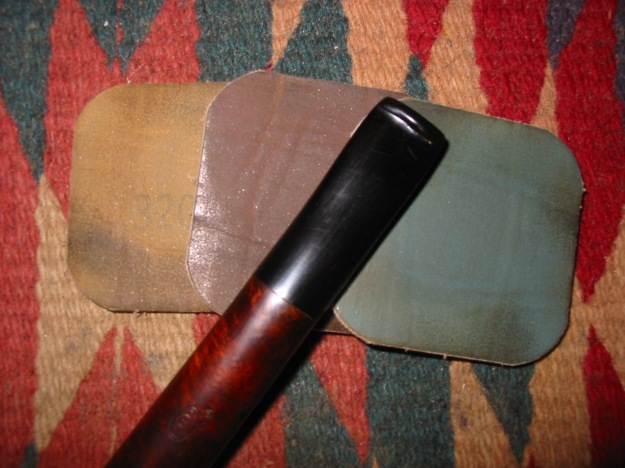 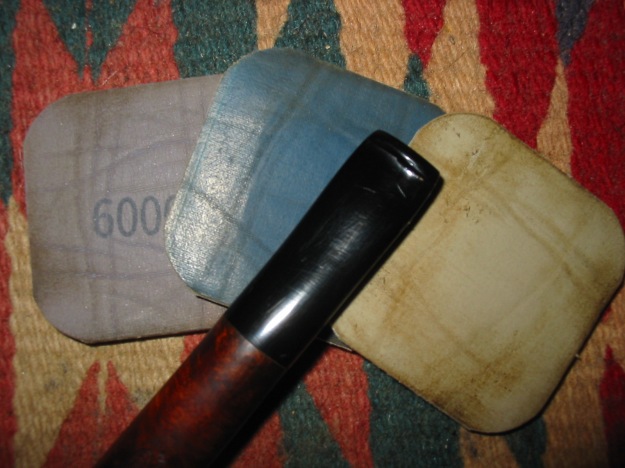 I did some more sanding with micromesh sanding pads on the stem to remove some of the light scratching that showed up under the flash and then buffed the stem and bowl with White Diamond. I gave them both multiple coats of carnauba wax to protect and give it a shine. The first three photos below show the repair as it stands now. The surface of the bowl is smooth to the touch. The light and the dark spots on the repair are some of the briar dust in the patchwork. Some takes the stain and is dark and there seem to always be light spots as well. This old pipe has come a long way since I received it in the mail.

The finished pipe is shown in the next series of four photos. The stem fit came out nicely. The change from a saddle to a taper style worked well. The contrast stain looks great on the pipe. Over all I am well pleased that I decided to stain it and not rusticate it. I look forward to loading up a bowl and enjoying the “new” pipe. 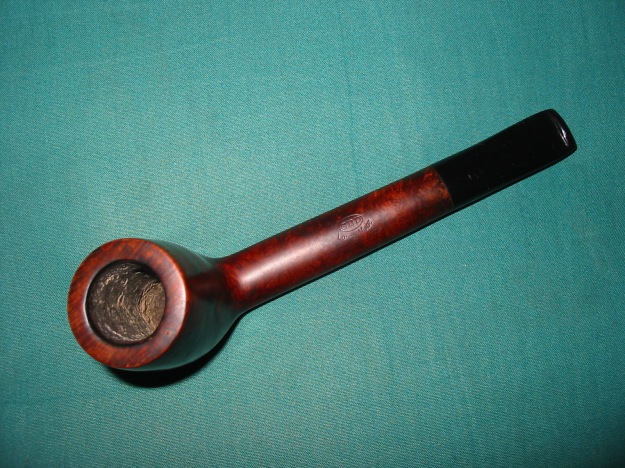