The next pipe on the work table came to us from an online auction from Mountain Top, Pennsylvania, USA. It is classic Bulldog with a mixed finish (rusticated and smooth) around the bowl. It is stamped on the left side of the shank and reads Frank is script [over] Medico [over] Real Briar. On the right side of the shank it read PAT. 1967585. One of my first pipes was a Medico so there is always something that draws me to the brand. The finish on the bowl was very dirty with dust and grime ground into the bowl sides and obscuring the grain. The rusticated panels were also very dirty. The twin rings around the bowl cap had a lot of debris ground into them. There was a very thick cake in the bowl and lava overflow on the rim top. The vulcanite stem was oxidized, calcified and had tooth marks and chatter ahead of the button on both sides. The tenon was metal and perforated and dirty. I cannot remember whether it had a filter in the tenon or not when we got it. Jeff took photos of the pipe to show its general condition before he did his cleanup.

As I mentioned above the exterior of the pipe was very dirty – grime and grit ground in from years of use and sitting. I have to say that this was obviously someone’s favourite pipe judging from the buildup in the bowl. The rim top was covered with a coat of thick lava that overflowed from the thick cake in the bowl. It was hard to know what the rim edges looked like because of the lava.  The stem was dirty and oxidized with tooth chatter and marks on the top and underside of the stem at the button.

Jeff took photos of the sides and the heel of the bowl to give a better feel for the condition of the briar around the bowl. The pink fills are visible all around the bowl sides.

The next photos show the stamping on the sides of the shank. The stamping is very readable. It reads as noted above. 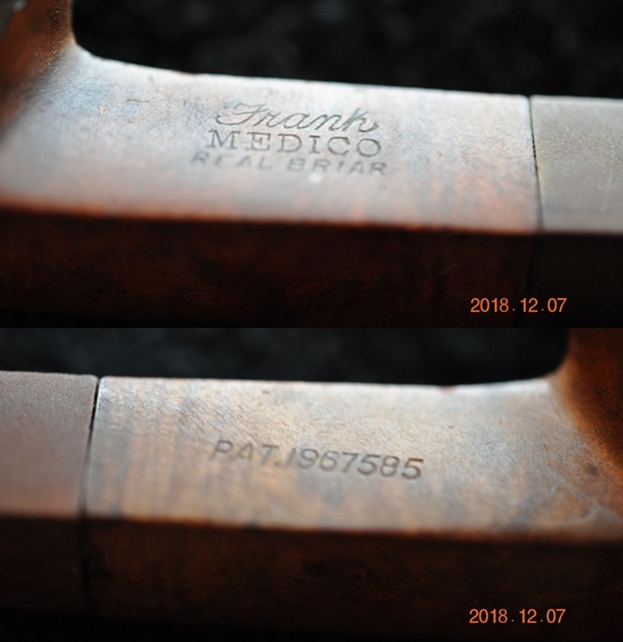 Before doing my part of the work on the pipe I decided to do some research. I have worked on and smoked Medico pipes in the past but I have never worked on a Patent Frank Medico like this one with the mix of rusticated and smooth finishes. I decided to look on the normal sites to see what I could find out about this line. I to Pipephil’s website and found some information on the Frank Pipe Company with a white F logo (http://www.pipephil.eu/logos/en/logo-f4.html). The FRANK stamp is identical to the one that I am working on.

I turned then to the second on the Medico Pipe line to see if there was any information on a pipe that was stamped like the one I was working on and sure enough found one. It is stamped the same as the one am working on (http://www.pipephil.eu/logos/en/logo-medico.html). I did a screen capture of the Patent section. The Patent Number is the same on the second line. The logo on the stem is the same as the pipe I am working on.

I turned to Pipedia to see what further information was available on that site and if there was anything specifically on this line (https://pipedia.org/wiki/Medico). I quote from the history of the brand:

Medico was created in 1933, and is still produced by S.M. Frank. The brand is famous for its pipe filters, which were launched in the same year. Since 1966, some models have been made in Brylon, a synthetic material, and others in briar. The brand was also sold by the English

The pipe I am working on is stamped with the letter F on the left topside of the saddle stem. It is like the one in the second screen capture above.

I did a search of the United States Patent and Trademark Office for the Patent Number 1,967,585. I was able to find the patent information for the absorbent filter cartridge that was granted on July 24, 1934. 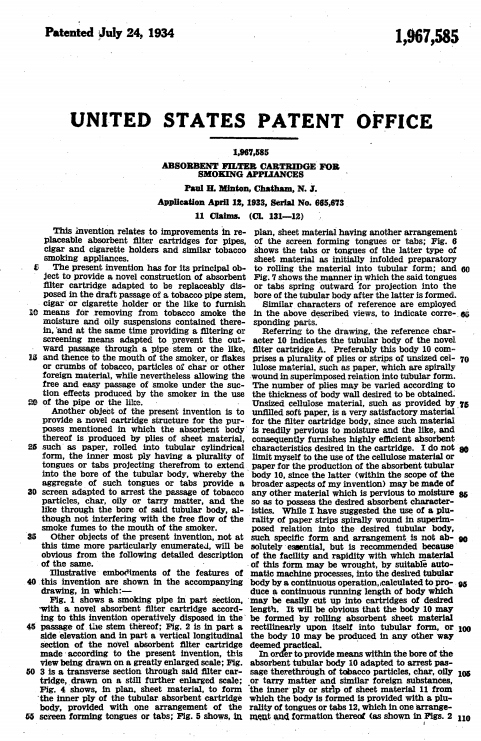 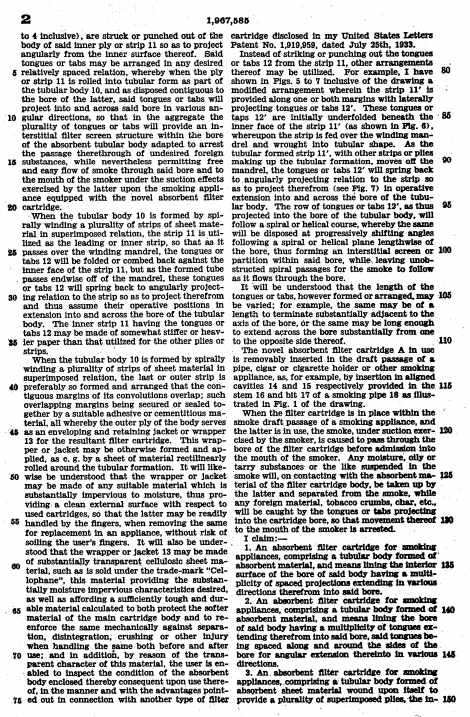 Jeff cleaned the pipes with his usual penchant for thoroughness that I really appreciate. The pipe was a real mess when he got it and I did not know what to expect when I unwrapped it from his box. I was surprised to see how well it turned out. He reamed it with a PipNet pipe reamer and cleaned up the reaming with a Savinelli Fitsall Pipe Knife. He scrubbed out the internals with alcohol, pipe cleaners and cotton swabs until the pipe was clean. He scrubbed the exterior of the bowl with Murphy’s Oil Soap and a tooth brush to remove the grime and grit on the briar and the lava on the rim top. The finish looks very good with good looking grain around the bowl and shank. The putty fills had all fallen out on the sides and front of the bowl and left pits. Jeff scrubbed it with Soft Scrub and soaked it in Before & After Deoxidizer to remove the oxidation on the rubber. When the pipe arrived here in Vancouver for the second stop of its restoration tour it looked a lot better. I took photos before I started my part of the work.

I took photos of the stamping on the side of the shank and it is clear and readable. It is stamped as noted above. 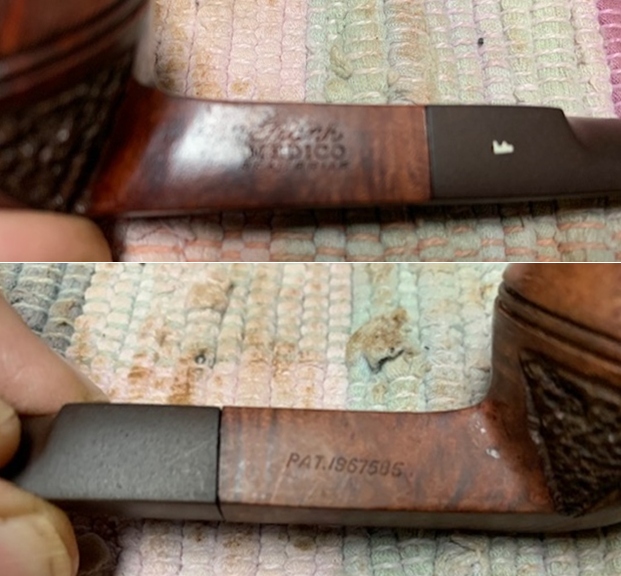 I removed the stem for the shank and took a photo of the bowl and stem to give a picture of what it looked like. It is a classically shaped Bulldog with a metal tenon made to hold the Medico Filters! 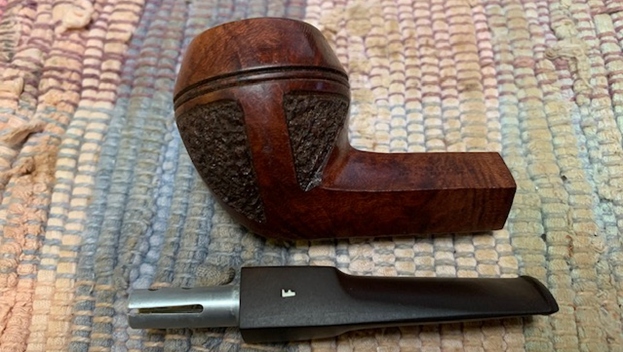 Now, on to my part of the restoration of this Frank Medico Pat Bulldog. I decided to clean up the remaining varnish/lacquer finish on the bowl and shank. I wiped it down with acetone on a cotton pad until I had removed all of the shiny spots on the smooth portion of the finish and the spots in the rustication as well.

The bowl and rim top were in very good condition once I had cleaned them off. I polished the top of the bowl, the repaired areas and the entirety of the bowl with micromesh sanding pads – wet sanding with 1500-12000 grit pads and wiping the briar down with a damp cloth after each sanding pad. 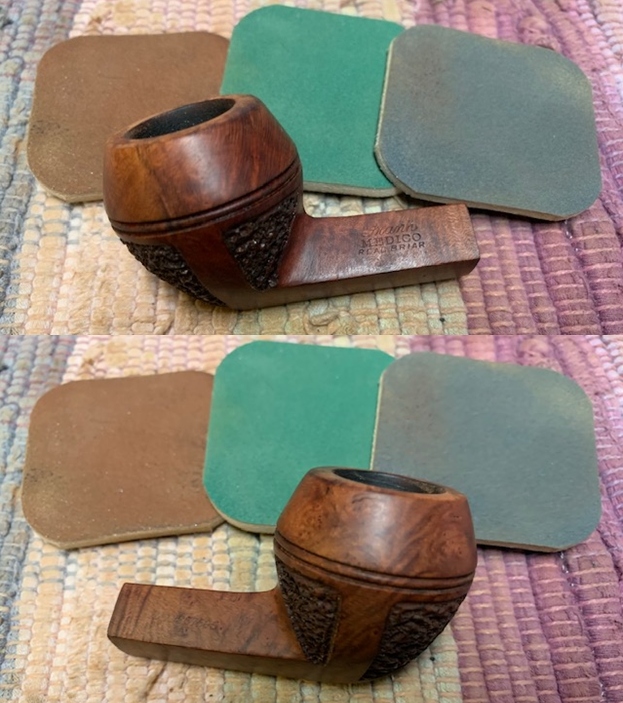 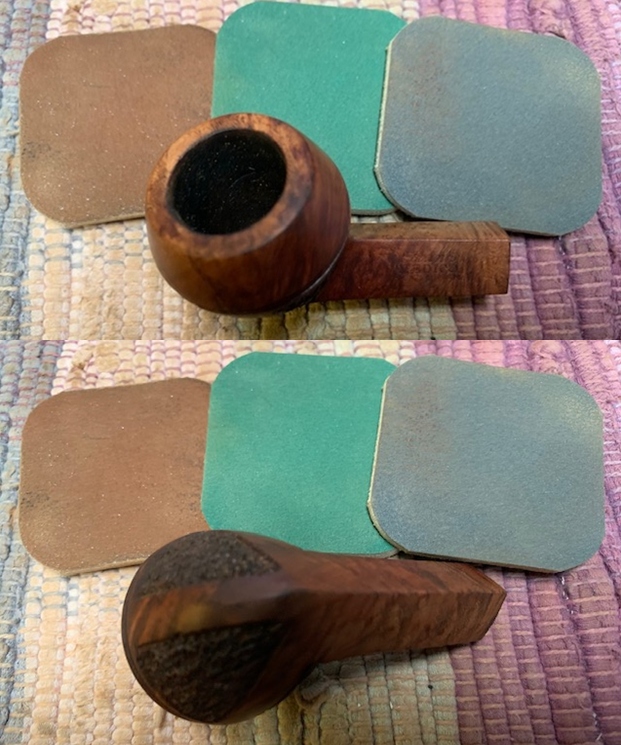 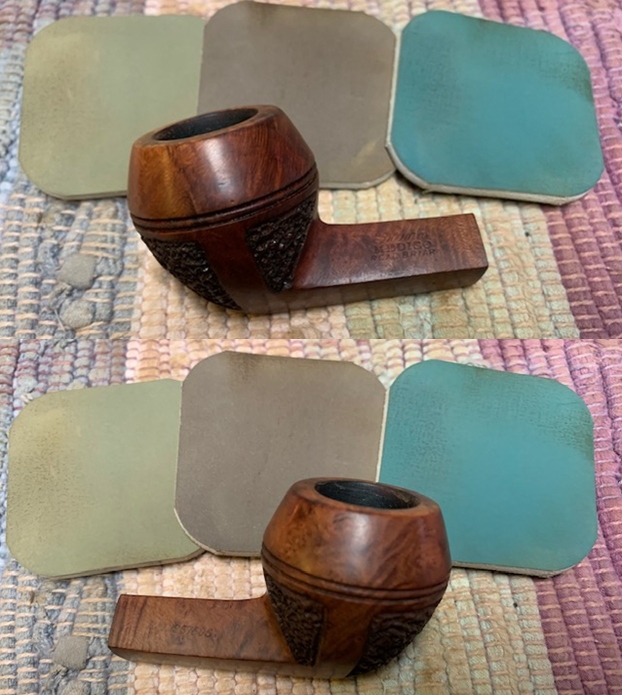 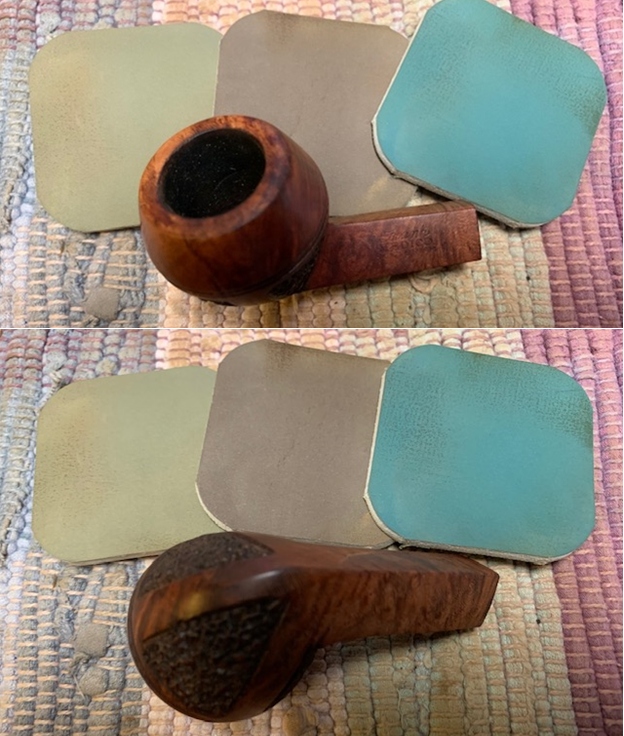 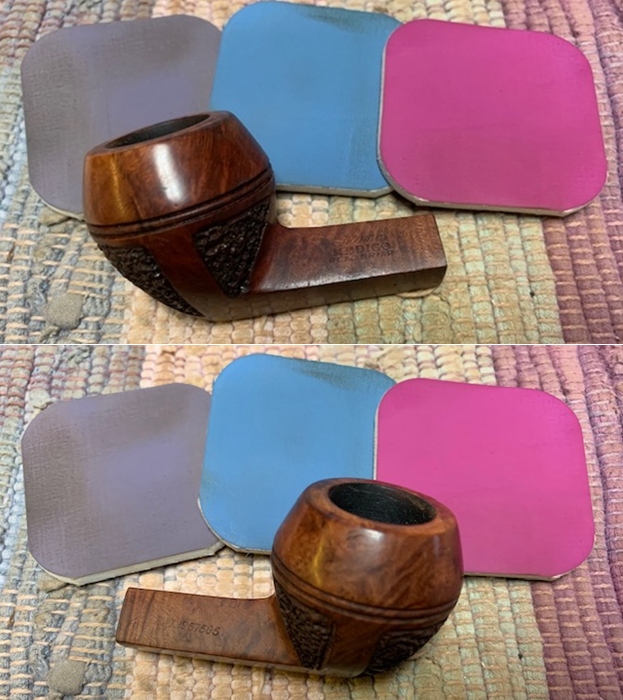 I rubbed the bowl down with Before & After Restoration Balm. I worked it into the surface of the briar with my fingertips to clean, enliven and protect it. I let the balm sit for 10-15 minutes and then buffed with a cotton cloth to raise the shine. 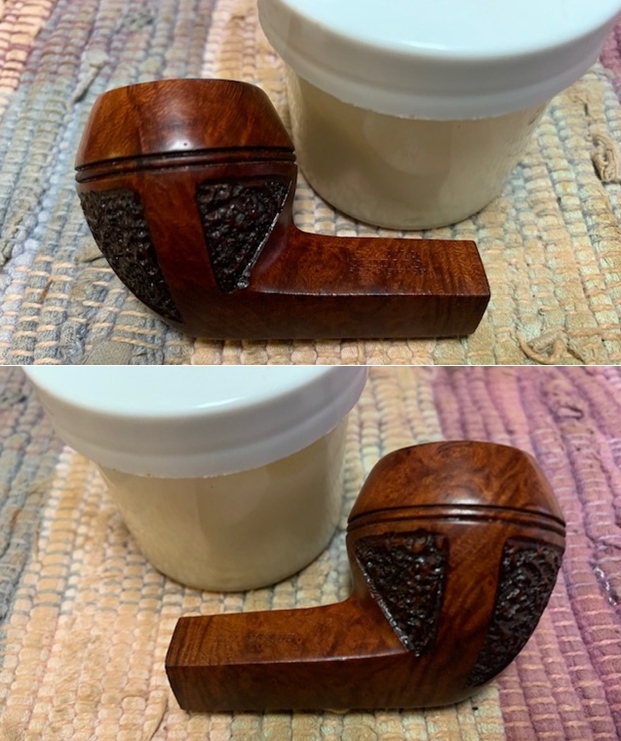 I set the bowl aside and turned my attention to the stem. I “painted” the surface of the mouthpiece with the flame of a Bic lighter to lift the tooth marks. I was able to remove the majority of them this way. I filled in the tooth marks that remained with clear super glue. I set the stem aside to let the repairs cure. 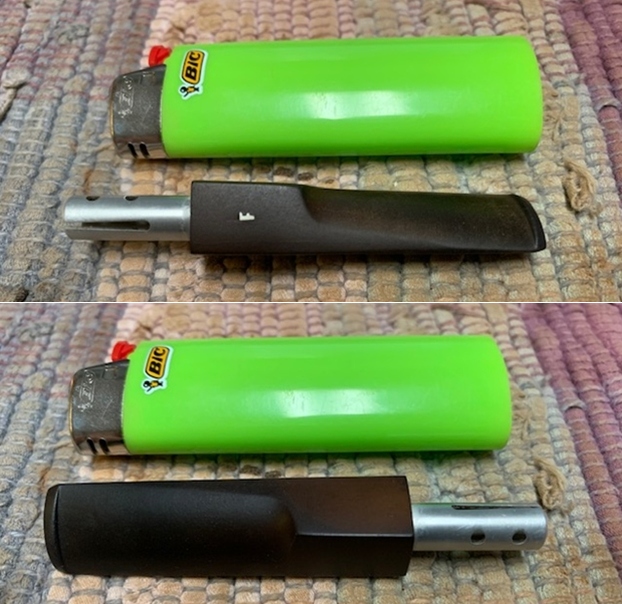 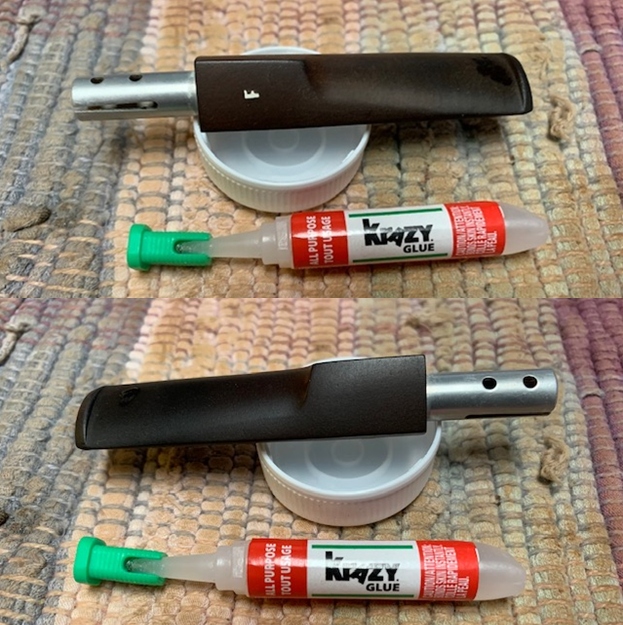 Once the repair had cured I used a needle file to clean up the button edge and flatten out the repairs. I sanded it with 220 grit sandpaper to further blend the repairs into the vulcanite. I started polishing the stem with 400 grit wet dry sandpaper.

I scrubbed the stem with Soft Scrub all-purpose cleanser to remove the remaining oxidation on the stem surface. Once it was scrubbed clean it was ready to polish. 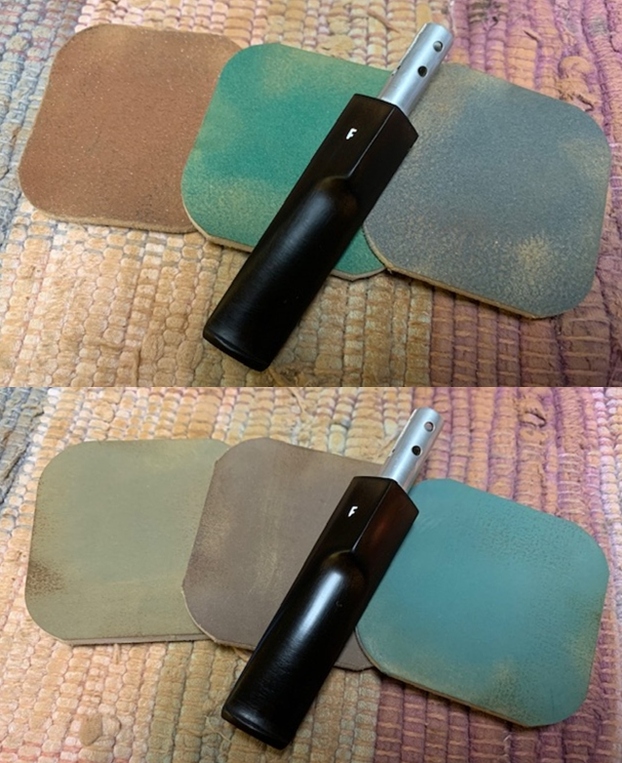 I have a few packages of Medico Filters that were made for the Medico system of this pipe. I took one out of the package and put it in the tenon. The photos show the fit of the filter.

This Frank Medico Patent Mixed Finish Bulldog turned out to be a great looking pipe. The brown finish on the smooth portions of the pipe is a great contrast with the dark brown/black rustication in the panels around the bowl sides. The pipe is in great condition and works well with the polished vulcanite saddle stem. I put the stem back on the bowl and carefully buffed the pipe with Blue Diamond on the buffing wheel. I gave the bowl and stem multiple coats of carnauba wax on the buffing wheel and followed that by buffing the entire pipe with a clean buffing pad. I hand buffed the pipe with a microfiber cloth to deepen the shine. The finished Frank Medico Filter Bulldog fits nicely in the hand and feels great. Give the finished pipe a look in the photos below. The dimensions of the pipe are Length: 5 inches, Height: 1 ½ inches, Outside diameter of the bowl: 1 ¼ inches, Chamber diameter: ¾ of an inch. The weight of the pipe is 29g/1.02oz. If you are interested in carrying on the pipe man’s legacy with this pipe send me a message or an email. I have more to work on of various brands. Perhaps one of those will catch your attention. Thanks for reading this blog and my reflections on the pipe while I worked on it. 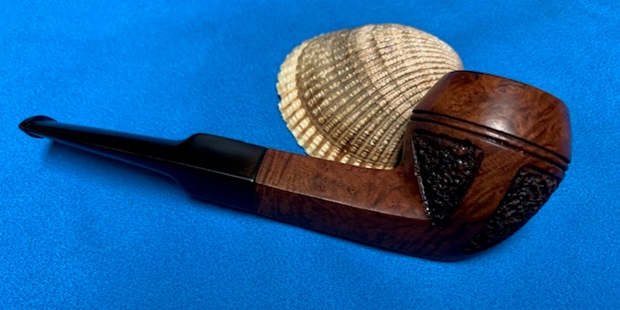 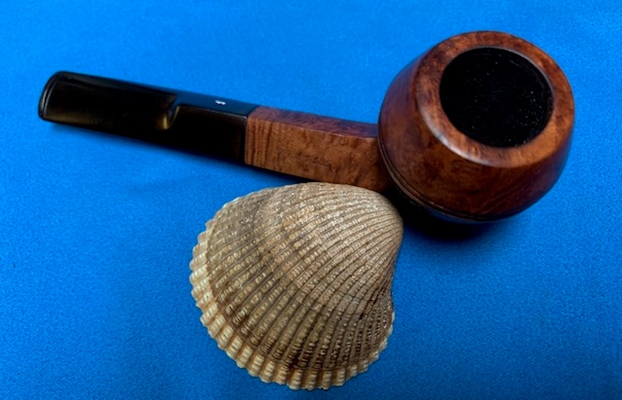 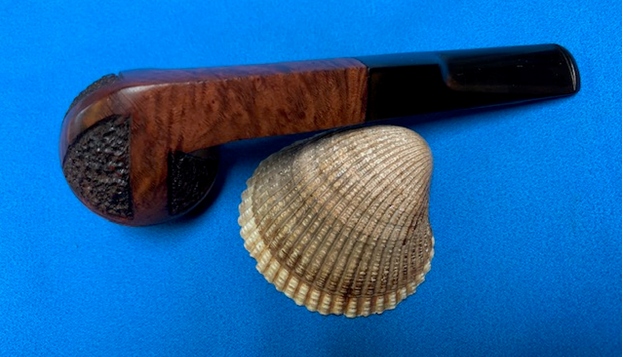 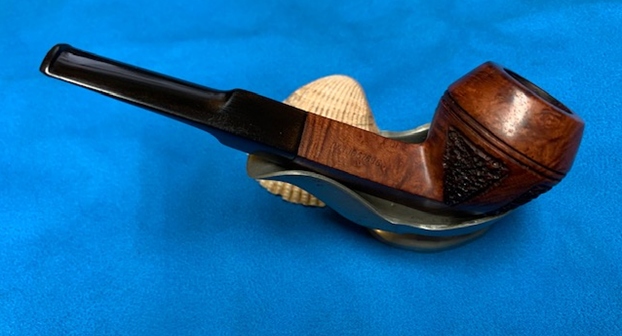 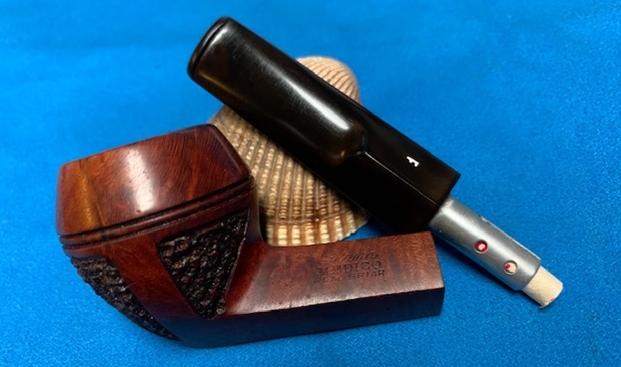 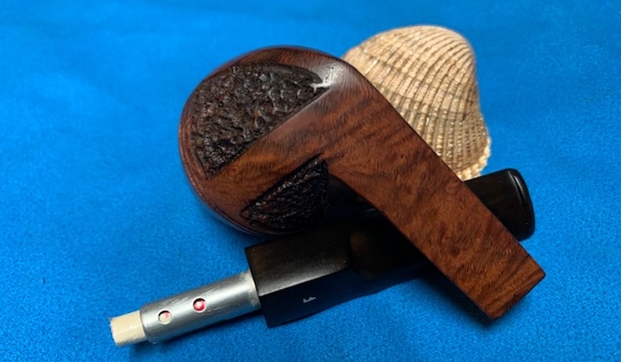 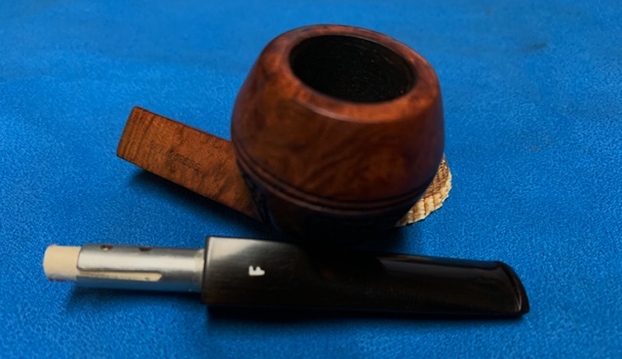