Recently my brother Jeff sent me a very interesting pipe. It has a plateau bottom on the shank and bowl with fluted sides merging upward with a stack shape billiard bowl. The shank looks quite normal but it has plateau on the bottom. It is quite unique looking and combines some of the features of a freehand and some of the features of a stack. The left side of the shank was stamped Kaywoodie over Original over Imported Briar. There is no other stamping on the shank or the bowl. When Jeff received the pipe it was in pretty decent condition – dirty but really not too bad. The finish was dusty and dirty with grime worked into the lovely grain of the briar and particularly into the underside plateau. The bowl had a moderate cake in it but it did not go all the way to the bottom of the bowl – in fact the pipe was not even broken in. The rim top was free of lava but there was some darkening on the backside of the rim top. The inner and outer edges of the bowl were in great condition. The stem had a white circle with the Kaywoodie Club on the left side of the taper stem. It had a Kaywoodie 3 hole stinger and a threaded metal shank that screwed into a metal mortise and spacer ring. The stem had some light tooth marks on both sides at the button. It was oxidized but in decent condition. Jeff took these pictures of the pipe to show its condition before he started his cleanup work.

On the left side of the shank the stamping was very clear and readable. You can see that the pipe has some interesting grain even on the shank.

Jeff had reamed the bowl with a PipNet pipe reamer and followed up with a Savinelli Fitsall pipe knife to remove the cake. He scrubbed out the mortise and the airway in the shank and the stem with alcohol, cotton swabs and pipe cleaners. He scrubbed the exterior of the bowl, rim, shank and stem with a tooth brush and Murphy’s Oil Soap to remove the oils and tars on the bowl, rim and shank. He rinsed it under running water. He dried it off with a soft cloth. He was able to remove the majority of darkening on the rim top without harming the finish underneath it. Without the grime the finish looked good. There some large and ugly pink fills in the finish. There was one on the rim top on the right side, there was a pair of them on the top of the shank at the joint of the shank and bowl and the final one was in the fluted area to the right of the shank near the bottom of the bowl. Other than the oxidation and chatter the stem was actually in pretty good condition and would only need to be polished. I took photos of the pipe to show its condition before I started my work on it. 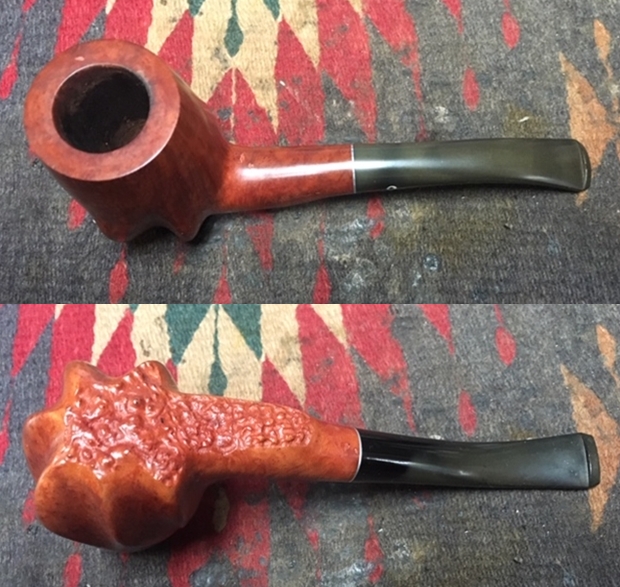 I took close up photos of the rim top that shows the clean bowl and the light burn damage around the inner edge toward the back of the bowl. (You can also see the small fill on the top of the rim at the top of the photo, right side of the pipe.) The stem was clean and Jeff had used Before & After Deoxidizer to soak and remove much of the oxidation. He rinsed out the inside of the stem and rinsed off the exterior as well. The photos of the stem show how good the stem actually looked after this treatment. 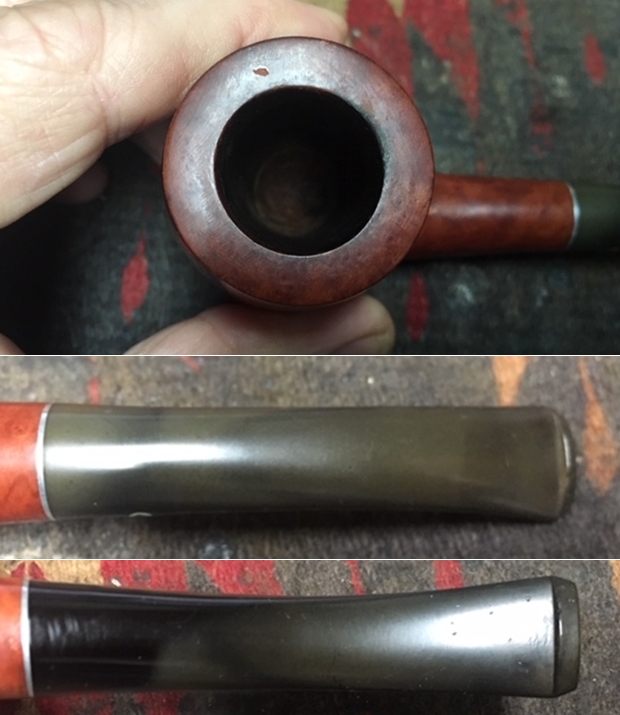 I unscrewed the stem to show the three hole stinger and the threaded tenon. 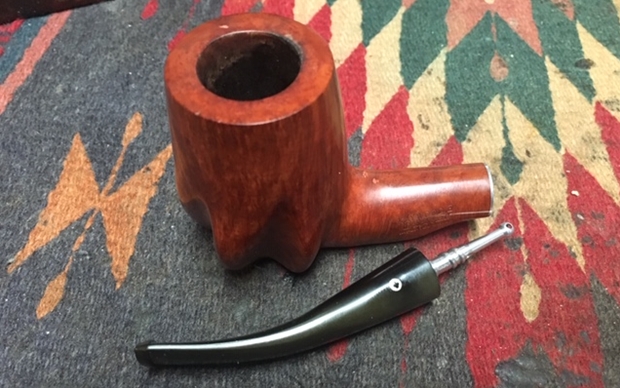 I took some photos of the pink putty fills in the briar on the rim top and on the shank and on the lower right side of the bowl near the shank. 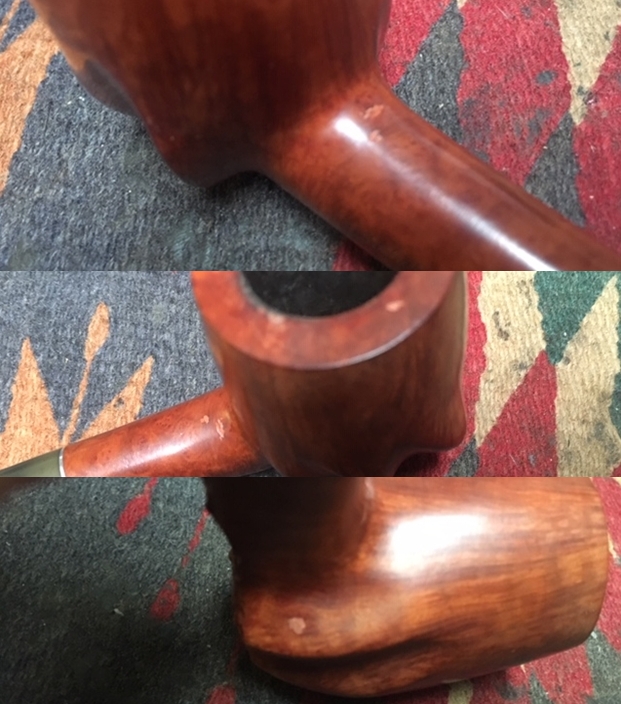 I picked out the fills on the bowl and shank with a dental pick and a sharp pen knife point to remove as much of the putty as I could.

I filled in the freshly dug out fills with briar dust and clear super glue. I put glue in the fills and used a dental spatula to fill briar dust into the glue repairs. 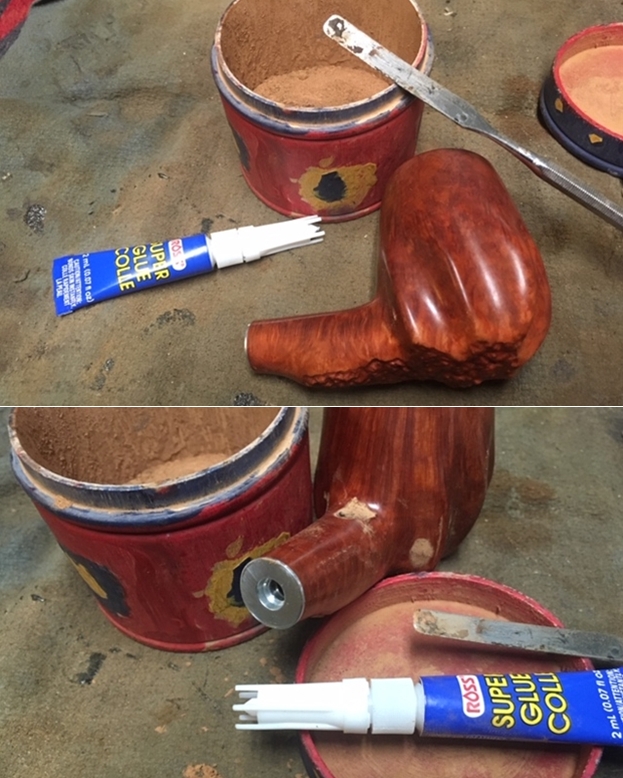 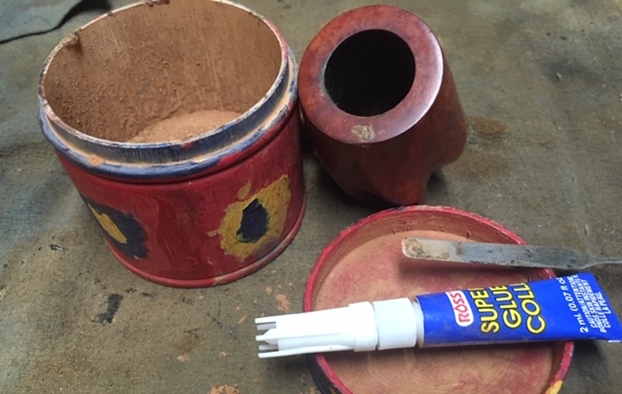 I polished the repaired areas with micromesh sanding pads – wet sanding them with 1500-2400 grit pads and dry sanding with 3200-12000 grit pads. I wiped the areas down with a damp cloth to clean off the sanding dust.

I touched up the sanded and polished areas with an Oak coloured stain pen. It matched really well with the rest of the bowl and shank. Once it is waxed and polished they will blend in a lot better than the pink ones. 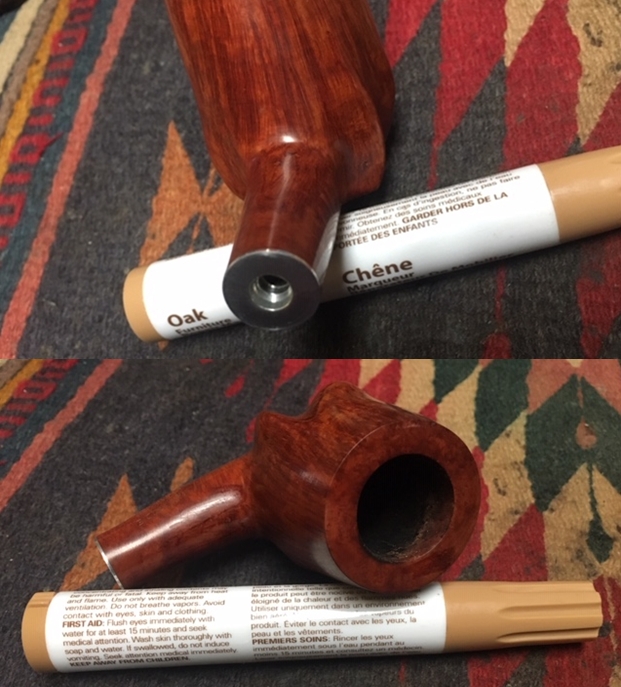 I rubbed the bowl down with Before & After Restoration Balm to deep clean the briar, particularly the sanded areas. I worked it into the plateau on the bottom of the bowl. The product works to clean, enliven and protect the briar. I hand rubbed it with my fingers and wiped it off with a soft cloth. I buffed the bowl with a horsehair shoe brush to polish it. The briar really began to have a rich shine. I took some photos of the bowl at this point to mark the progress in the restoration.

I set the bowl aside and turned my attention to the stem. I sanded the stem with 220 grit sandpaper to remove the tooth chatter and marks as well as the oxidation.

I polished the stem with micromesh sanding pads – wet sanding it with 1500-2400 grit pads and dry sanding it with 3200-12000 grit pads. I wiped the stem down after each pad with a damp cloth to remove the sanding dust. I used the Before & After Pipe Polish to remove the small minute scratches left in the vulcanite. I finished by wiping the stem down with a final coat of Obsidian Oil and set it aside to dry. 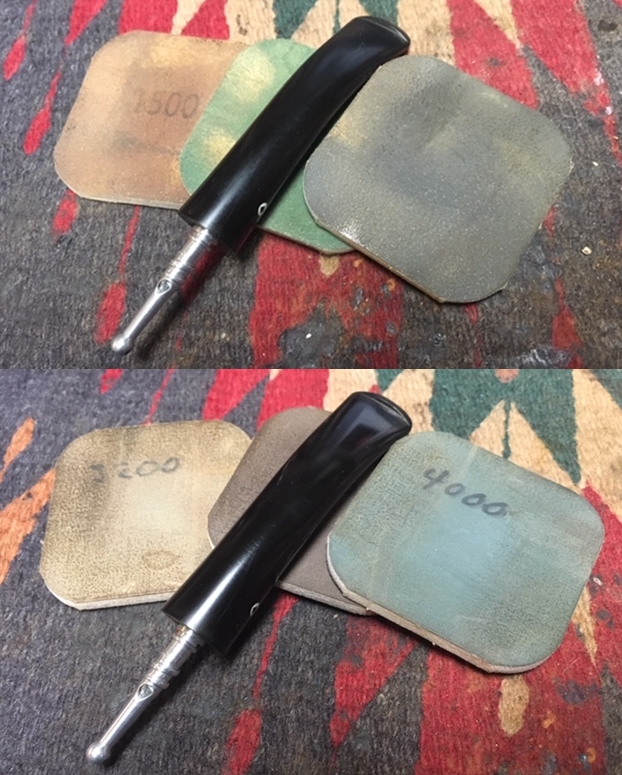 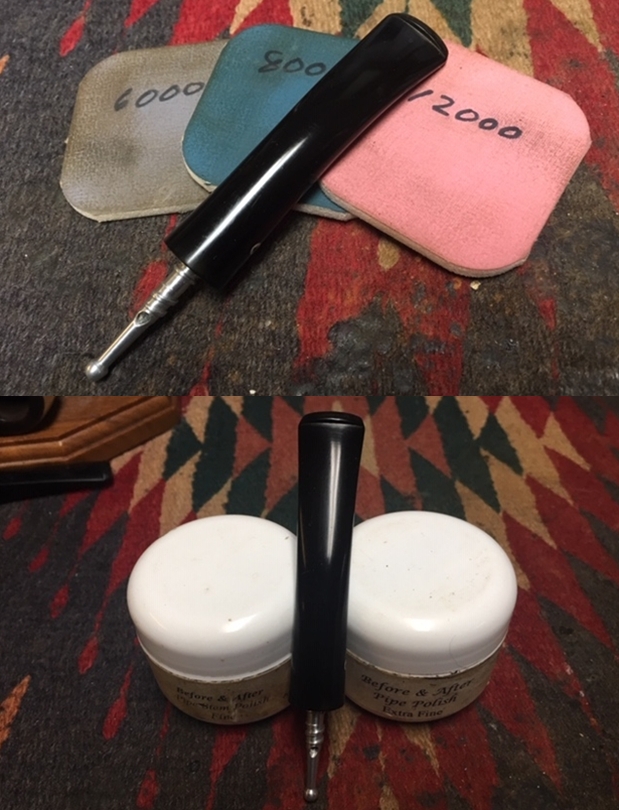 I polished the stem and bowl with Blue Diamond to polish out the remaining small scratches. I gave the bowl and the stem several coats of carnauba wax and buffed the pipe with a clean buffing pad to raise the shine. I worked some Conservator’s Wax into the plateau on the underside of the bowl and shank. I hand buffed it with a microfiber cloth to deepen the shine. The pipe polished up pretty nicely. The finished pipe is shown in the photos below. I have never seen a Kaywoodie quite like this one. It is not only unique in having the plateau on the underside but also the fluting on the side of the bowl. The stamping Kaywoodie Original is also a new one for me. The dimensions are Length: 6 1/4 inches, Height: 2 1/2 inches, Outside diameter of the bowl: 1 1/2 inches, Chamber diameter: ¾ of an inch. I will be adding it to the rebornpipes store shortly. If you are interested in adding it to your collection email me at slaug@uniserve.com or send me a message on Facebook. Thanks for walking through the restoration with me as I worked over this Kaywoodie Original. 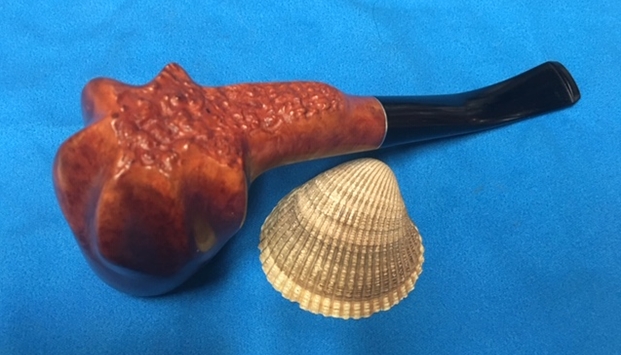 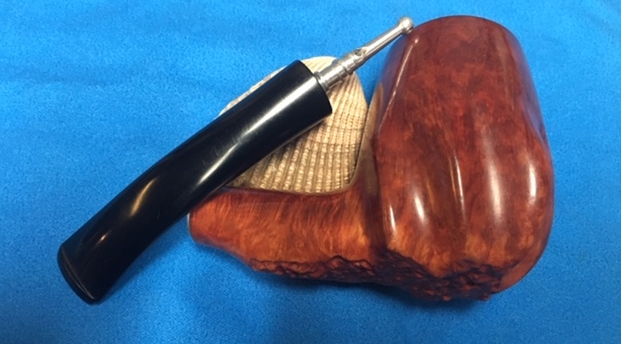