How often does it happen in one’s life that the person/ persons you are very keen to meet do finally meet up for a week or so? This, especially with the background when each of these friends is from across the world, has to cross the seven seas, numerous hurdles of visas and fine tuned itineraries of all the stake holders!! Well, believe you me readers, these remain as the most treasured days.

I recently had this great experience when Mr. Dal Stanton (The Pipe Steward) from Sofia, Bulgaria, Mr. Steve Laug (rebornpipes.com) from Vancouver, Canada and his brother Jeff from Idaho, USA, visited my family. The following week was a flurry of activities, which also included learning the finer nuances of pipe refurbishing while restoring some nice pipes from my grand old man’s collection, it was something like OJT (on the job training). One such pipe that was selected by Steve was this Brakner. This pipe was nowhere in the “To Restore” list of pipes that I had drawn out as I thought it to be some run-of-the-mill pipe, but was cherry picked by Steve with a smile while sifting through the pile of pipes.

I researched this maker and it was then that I realized the uniqueness of this brand and why Mr. Steve had selected it to work on. I visited rebornpipes.com and sure enough, Mr. Steve has worked on a Brakner before and researched the maker/ brand in detail. Here is the link to the write up that he has posted on his web page: https://rebornpipes.com/2018/08/26/breathing-new-life-into-a-brakner-antique-hand-cut-807/

From this write up, I have picked this picture which shows the Brakner design # 108 (ticked in red) that we were working on. The only variation is that my inherited pipe has a smooth band on the stummel below the rim. 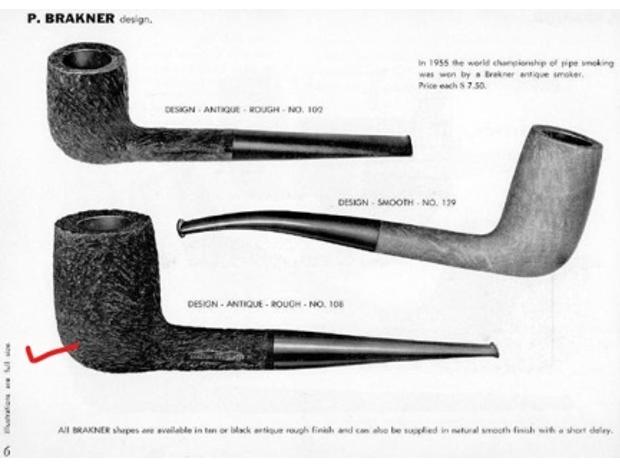 Having read the detailed account, I now know that I am holding a piece of pipe history and cannot thank my lucky stars for the inheritance and having being introduced to Mr. Steve.

INITIAL VISUAL INSPECTION
As is generally observed with most of my grandfather’s pipe, the chamber of this pipe too is filled with a thick cake with overflowing lava covering the rim top surface. The thick cake hides the condition of the inner walls of the chamber and will be ascertained only after the cake has been taken down to bare briar. Similarly, the condition of the rim top surface will be commented once the overflowing lava has been scraped off. However, with the inner rim edge, Steve and I suspect charring in the 4 o’clock direction and is highlighted in pastel blue circle. The outer rim edge too shows damage in the 6 o’clock direction and is circled in yellow. There is a thin smooth briar band extending down from the outer rim edge, which too, is covered in overflow of oils, tars and grime. The contrast of dark and medium brown stains on the rim top and the band should highlight the beautiful grain on the briar and will go well with the rusticated finish on the bowl and shank once cleaned up. 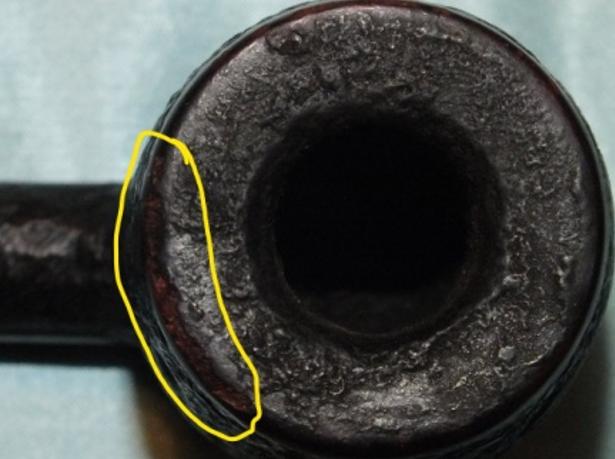 The mortise and the shank air way are clogged as expected making the air flow restricted and laborious. However, with the draught hole being right at the bottom of the chamber and the perfect alignment of the stem airway, tenon and the shank airway should make this one a fantastic smoker. The excitement of restoration and fun filled involvement of Steve, Jeff, Abha and me, all resulted in none of us taking any pictures of before and detailed pictures of the process. Each one thought that other was taking the pictures and the end result was that none of us took any!! Lol…

The unique rustications on the stummel surface are covered in oils, tars, grime and dust of all these years of use and storage. However, once cleaned up, the dark of the stummel should contrast beautifully with the smooth brown shank end band, the rim top and the band below the rim outer edge.

The vulcanite stem is heavily oxidized and showed heavy tooth chatter and deep tooth marks on the upper stem surface. The button on the upper surface has bite marks and will have to be rebuilt and reshaped. The same holds true for the lower stem surface, albeit with less severity. As brought out earlier, the trademark green dot on Brakner pipe stem has turned a shade of brown. The tenon does not seat flush inside the mortise. This issue, in all probability, should get addressed once the mortise is cleaned off the entire accumulated gunk. Sorry again, I did not take sufficient pictures of the stem either!! 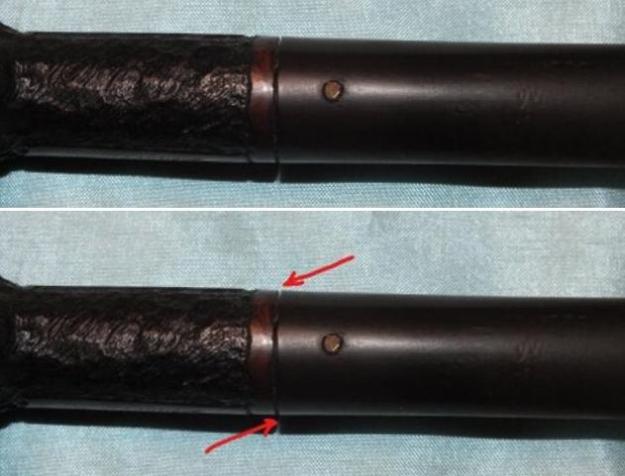 All in all, judging from the initial examination, we do not envisage any major/ serious issues to present themselves in the course of restoring this beauty, with the exception of charred inner rim edge and damaged outer rim edge.

THE PROCESS
Even before Steve and Jeff had arrived, it was decided that Abha, my wife who helps me in the initial clean up, and Jeff who does it for Steve, would work together on the initial clean up and Steve and I would do the repairs and final finish on these pipes. This would help us understand and learn the techniques and processes involved in restorations. This exactly what we did while working on this pipe, but with a twist, which I shall bring out later.

Abha and Jeff reamed the chamber with Castleford pipe reamer set (one of the many gifts for Abha from Steve and Jeff) followed by cleaning the mortise and shank airway using dental pick, cotton buds/ hard and soft bristled pipe cleaners dipped in isopropyl alcohol. Once the shank internals were cleaned, we called it a day.

And this is where the twist occurs!!

When we met again over breakfast the next day, the Brakner was completed!! In short, what really started as a combined project was eventually completed by Steve and Jeff alone. What follows is the narrated sequence and pictures that Steve and Jeff shared with me over a pot of coffee (perfect brew was demonstrated by these two gentlemen as we are predominantly tea drinkers).

Once the chamber and shank were cleaned, Jeff cleaned the external surface of the stummel and the smooth rim top surface with Murphy’s Oil soap and cotton swabs followed by scrubbing the rusticated surface with a toothbrush and dish washing soap. This rid the stummel rustications of all the accumulated dust, dirt and grime and both the smooth brown bands around the rim and shank now contrasts beautifully with the dark stummel surface. However, the inner and outer rim damage revealed itself in all its ugliness and this is what Steve decided to tackle at this stage in restoration. No pictures available to show the condition of the stummel at this point…sincere apologies!!

Steve began the process of addressing the inner rim damage by creating a bevel to the inner rim edge to mask the blackened rim and address the out-of-round chamber with a folded piece of 220 grit sandpaper. Once satisfied with the repairs, he polished the entire rim top surface with micromesh pads, wet sanding with 1500 to 2400 grit pads and dry sanding with 3200 to 12000 grit pads. The rim top surface now appears amazing and the repairs appear to be almost non-existent. 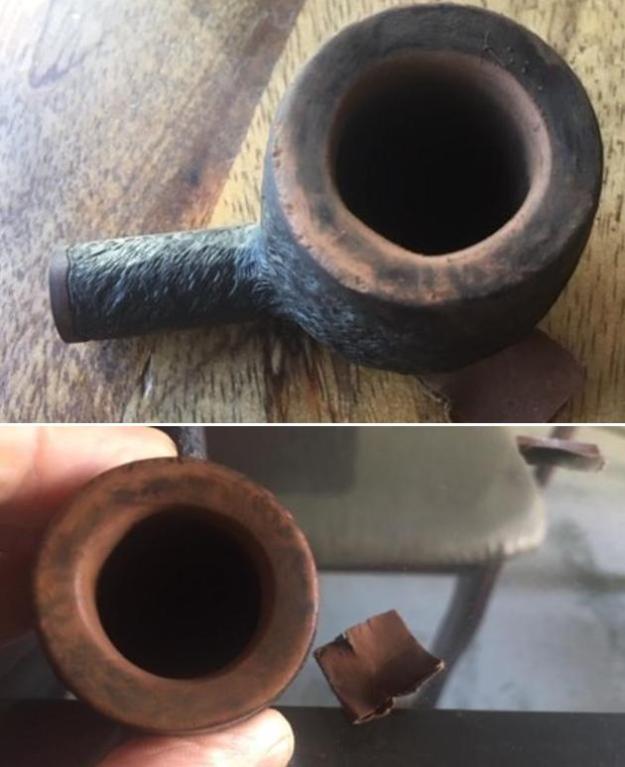 To enliven the briar wood and further enhance the contrast of the bands with the rest of the dark stummel surface, he rubbed a little quantity of “Before and After” balm in to stummel surface and set it aside for 20 minutes for the balm to be absorbed in to the briar. Thereafter he hand buffed it with a microfiber to deepen the shine. The stummel looks nice and vibrant. 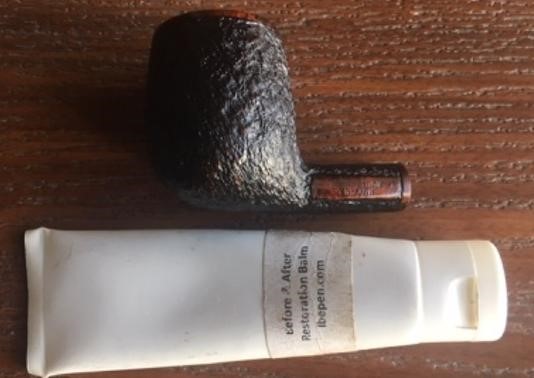 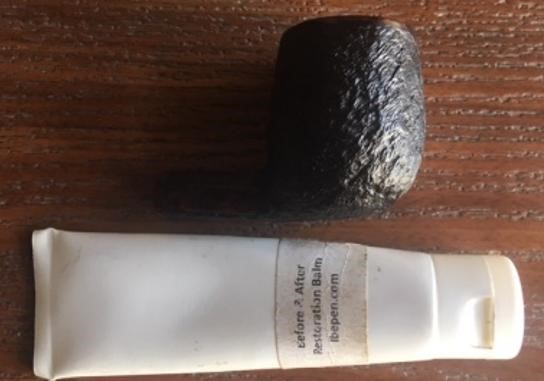 All this while, Jeff was busy working the stem. He cleaned the internals of the stem using pipe cleaners dipped in isopropyl alcohol. Once the stem internals were clean, he cleaned the stem surface with cotton pads dipped in isopropyl alcohol. This step also helps to remove surface oxidation to some extent. With this, he handed the stem back to Steve to address the tooth chatter and deep bite marks. 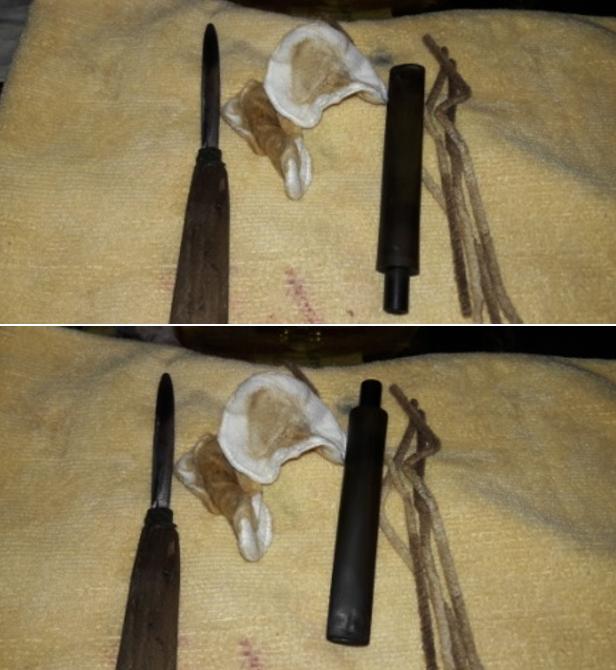 To address the issue of bite marks and tooth chatter on the stem surfaces, Steve flamed the surface with the flame of a Bic lighter. Vulcanite has the property to return to its original shape when heated and this is exactly what was being done. The tooth chatter and deeper bite marks were raised to the surface to a great extent. The remaining minor tooth indentations were filled with clear super glue and set aside to cure. Once the fill had hardened (and it was pretty quick, thanks to the 43 degrees temperature that was prevalent at that point in time!!), he sanded the fill and the entire stem surfaces with a folded piece of 220 grit sandpaper. This not only ensured a nice blend of the filled areas with the rest of the stem surface, but also removed the oxidation from the surface. He rubbed the stem surface with some Extra Virgin Olive Oile and set it aside to be absorbed in to stem surface. It was at this stage that self, Abha and my kids joined them for breakfast. 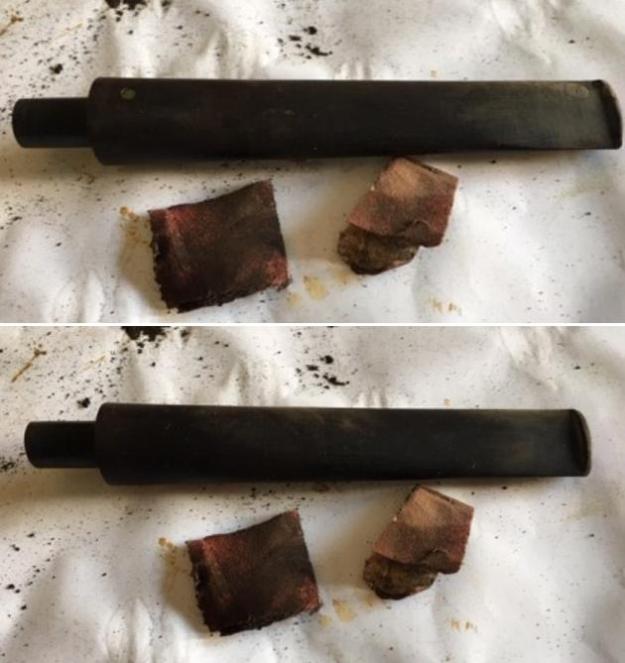 After a hearty breakfast, I launched a determined assault on the stem, subjecting it to the complete cycle of micromesh polish. The end result is a gorgeous, smooth and shiny looking black of the vulcanite stem. 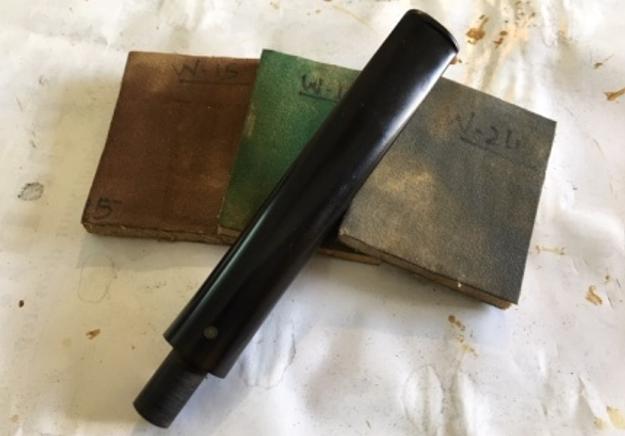 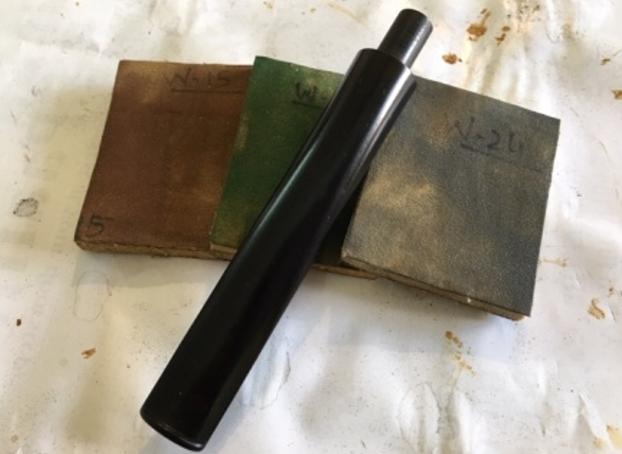 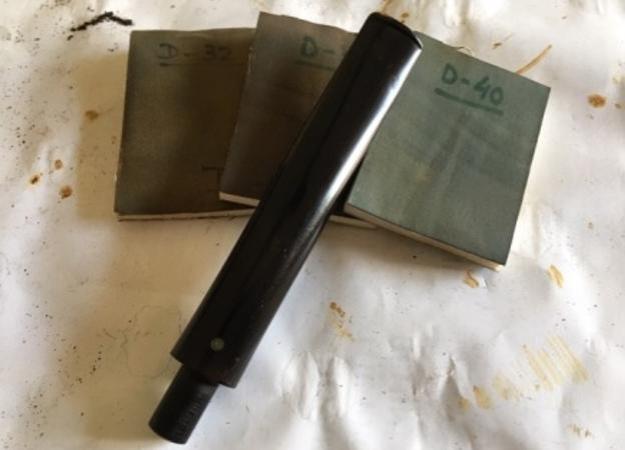 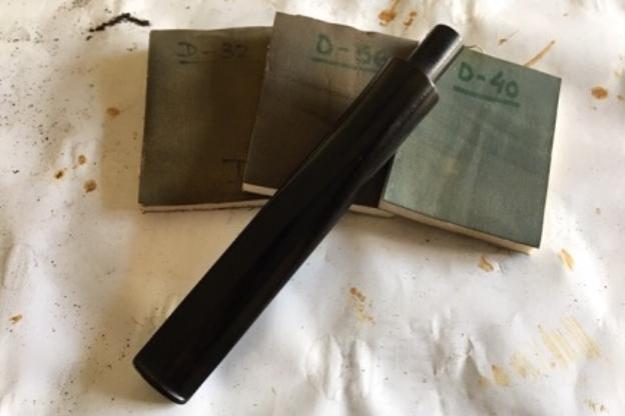 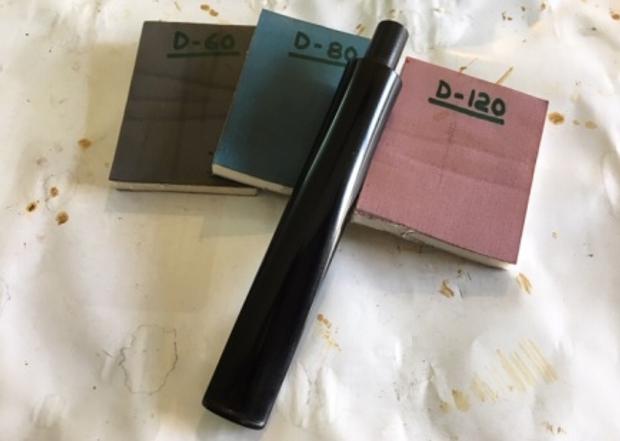 This was followed by the routine regime of polish with carnauba wax using my hand held rotary tool. The Brakner looks unique and oozes quality. Here are a few pictures that should give you a fair idea about the end results… Thank you all for being a part of this journey and all the encouragement and support extended. 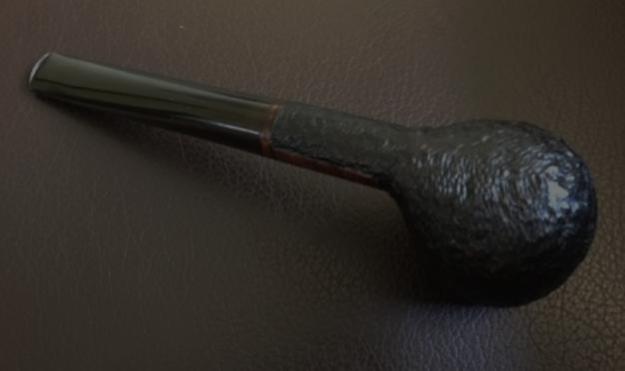 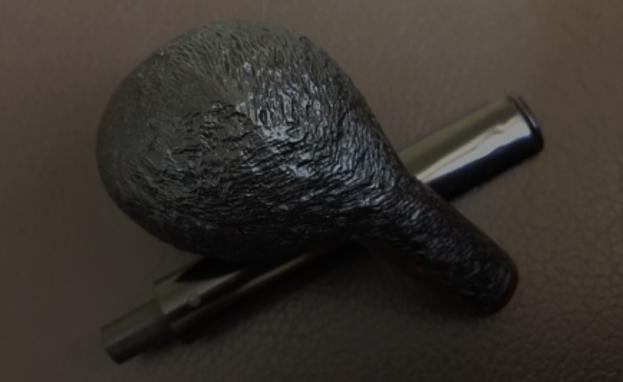 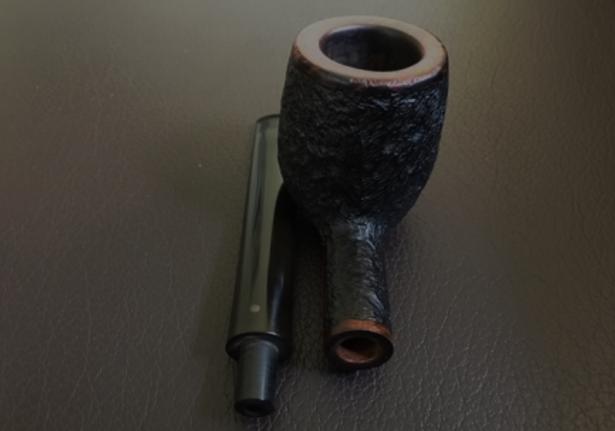 P.S. – As I mentioned above, the excitement of working and learning from Steve and Jeff coupled with the ambiguity of who is taking pictures and not to mention the chilled Beer and humorous banter, all resulted in a limited number of pictures.

Secondly, those of you who have been following rebornpipes.com regularly, would surely have read the detailed write up on the restoration of an 1846 BBB Amber stem by the master story teller, Dal Stanton (https://rebornpipes.com/2019/05/30/west-meets-east-in-india-to-restore-a-grandsons-treasure-an-1846-bbb/) !! While in one corner of the world, on the 10th floor apartment in Sofia, Bulgaria one of the longest write ups on rebornpipes.com was being shaped, here I was trying to piece all the processes involved in restoration of this unique piece of pipe history from memory and ending up with what could be the shortest write up on rebornpipes.com.