The next pipe on the table is another one that came to us from the group of pipes that Jeff and I purchased from a fellow in Copenhagen, Denmark on October 3, 2022. It is another Dunhill smooth finish that is in good condition. It is stamped on sides of the shank. On the left side it is stamped with the shape number OX followed by F/T. Next to that it reads Dunhill [over] Root Briar. On the right side it is stamped Made in [over] England by the date number 6. After that it is stamped with a 4 in a circle [followed by] R for Root Briar. The stamping is clear and readable as noted above. The pipe has a mix of brown stains that highlight some amazing grain that the shape follows well. The finish was dusty and oily around bowl and shank sides. The bowl had a thick cake and there was heavy lava on the rim top or edges. The filter saddle stem was lightly oxidized and dirty with tooth marks and chatter ahead of the button on both sides. Jeff took photos of the pipe to show what it looked like before he started working on it. 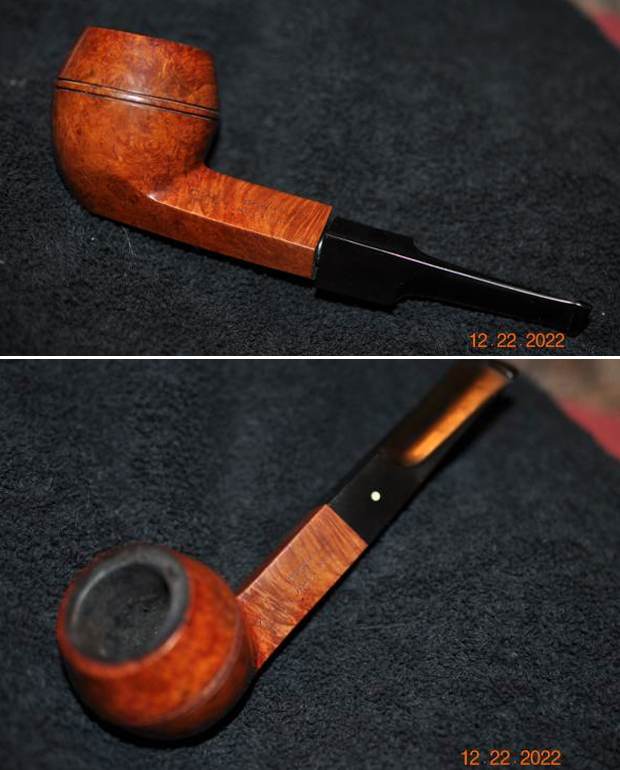 He took photos of the bowl, rim top and both sides of the stem to show their condition. The description above gives a clear sense of what we saw. 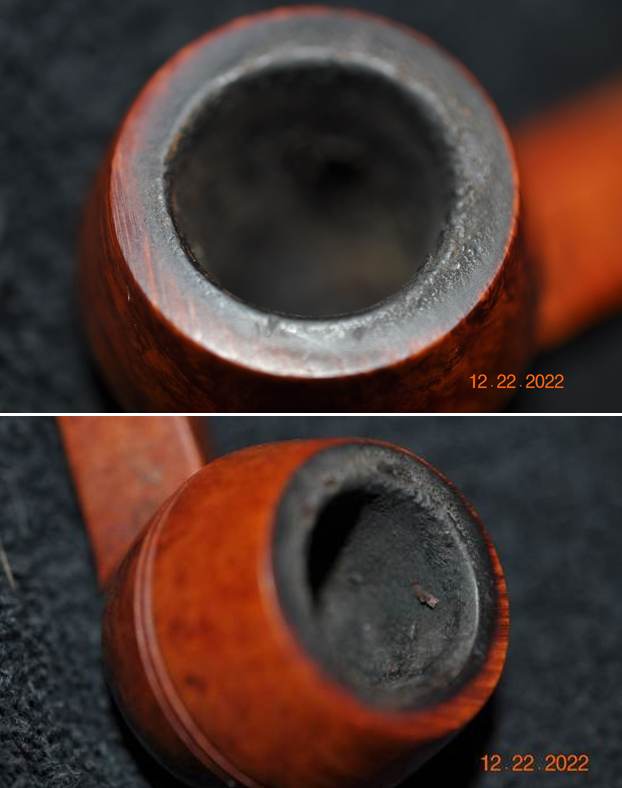 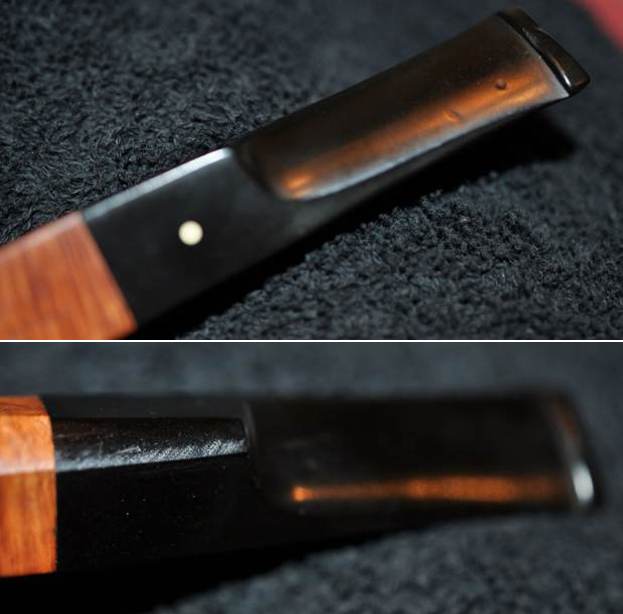 The photos of the sides and heel of the bowl show the amazing grain around the bowl and the colour of the finish on the pipe. Even under the grime it is a real beauty. 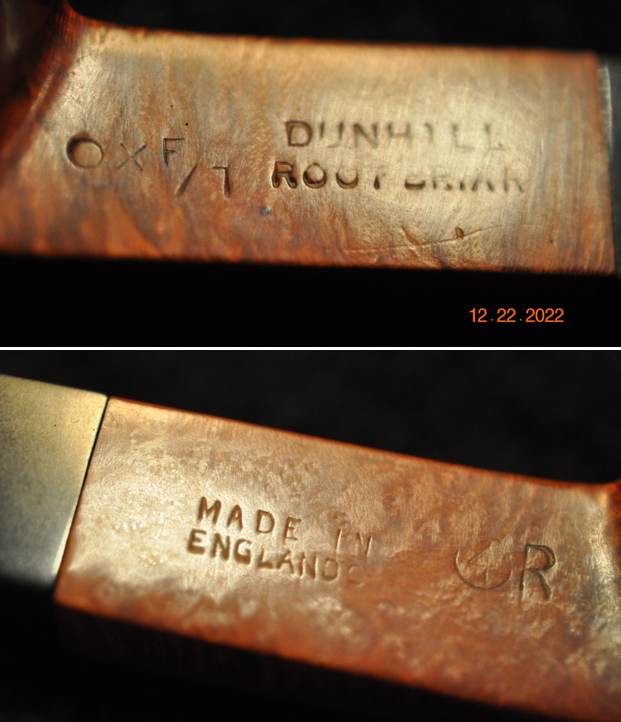 One of the first things I like to do is to unpack the stamping and understand each element in it. I turned to Pipephil’s helpful site (http://pipephil.eu/logos/en/dunhill/root-briar1.html). The stamping is interpreted as follows: The OX stamp is the shape for a Bulldog. The F/T stamp refers to the Fishtail style stem. The Root Briar stamp refers to the finish which is corroborated the R at the end of the stamping. The size of the pipe 4 in a circle is a Group 4. The 6 following the D of England gives the date the pipe.

Pipephil also has some helpful dating keys on the site that are basically flow charts that you can walk through to date your pipe (http://pipephil.eu/logos/en/dunhill/cledat-en1.html). I turned to Part 1 of the Dating Key and followed the chart. This pipe has a 6 following the D in England. It is the same size as the D so that took me to the section on the chart below (column one) which instructed me that the pipe could be dated as being made posterior to 1954. 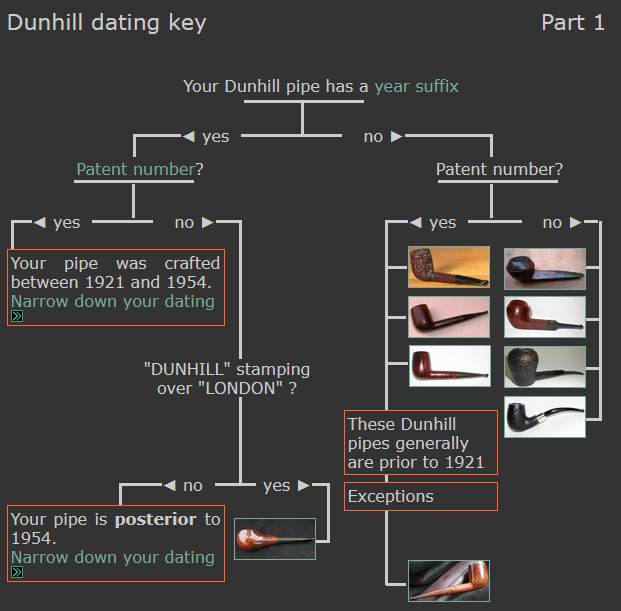 I followed the link following the “Your pipe is posterior to 1954. Narrow down your dating”. That took me to Page 2 of the dating key (http://pipephil.eu/logos/en/dunhill/cledat-en1a.html).   The third column (suffix 5…9) led me to the section with a 6 after the D in England. There was a directive for dating the pipe spelled out as follows: 1960 + suffix which gives the pipe a date of 1969.

I then turned to Pipedia’s section on Dunhill Root Briar to get a bit of background on the Dunhill finishes (https://pipedia.org/wiki/Dunhill#Root_Briar). I quote:

Root Briar – Introduced in 1931 and highly prized because the grain is more pronounced in this finish (usually made using Corsican briar – was made exclusively from that briar into the 60s). The Root Briar finish requires a perfectly clean bowl with excellent graining. Therefore, it is the most expensive of the Dunhill pipes. Corsican briar was most often used for the Root finish since it was generally more finely grained. This is a rare finish, due to the scarcity of briar suitable to achieve it. These pipes are normally only available at Company stores, or at Principle Pipe Dealers. Straight grained pipes were formerly graded A through H, but are now only “Dr’s” and graded with one to six stars, with the letters G and H still used for the very finest pieces.

Dunhill introduced its third major finish, the Root finish, in 1931. Corsican mountain briar is characteristically beautifully grained and the Root was made exclusively from that briar into the 1960s. The pipe was finished with a light natural stain to allow the beauty of the graining to show through. Although always available with a traditional black vulcanite bit, the Root was introduced in either 1930 or more likely 1931 and fitted with a marble brown dark and light grained vulcanite bit that has since become known as the ‘bowling ball’ bit because of the similarity in appearance between the bit’s finish and that of some bowling balls of the time. With the war, however, the bowling ball bit was dropped from production. Through 1954 (and after) the Root pipe nomenclature (including shape numbers) was identical to that of the Bruyere except that instead of the “A” of the Bruyere, the Root was stamped with an “R”. In 1952 when the finish rather then LONDON was placed under DUNHILL, ROOT BRIAR rather then BRUYERE was used for the Root. Loring, J. C., The Dunhill Briar Pipe, The Patent Years and After (self-published, Chicago, 1998).

I turned to work on the pipe itself. Jeff had done an amazing cleanup of the pipe. He reamed the light cake with a PipNet reamer and cleaned up that with a Savinelli Fitsall Pipe Knife. He scrubbed the internals of the bowl and stem with alcohol, cotton swabs and pipe cleaners. He scrubbed the externals with undiluted Murphy’s Oil Soap and rinsed the bowl off with running water. He soaked the stem in Briarville’s Pipe stem Deoxidizer and once it had soaked rinsed it off with warm water to remove the residual solution. He dried it off and rubbed it down to remove any oxidation that was still on the stem. The pipe looked very good when I received it. 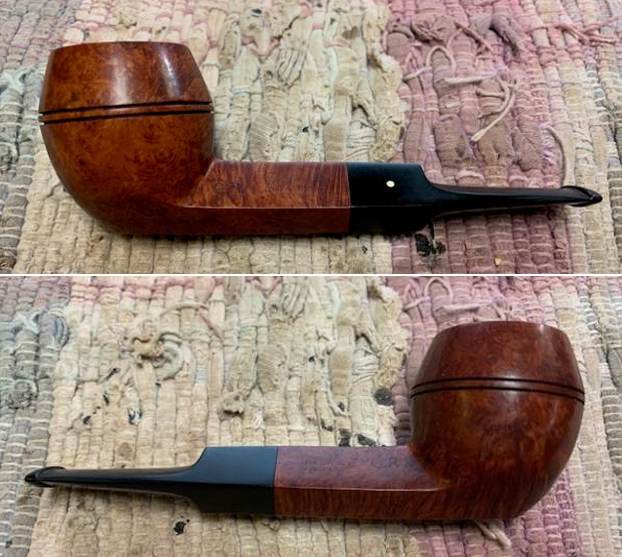 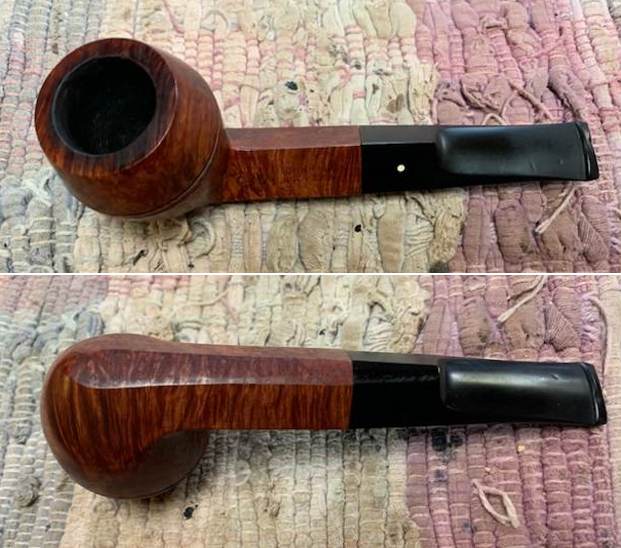 I took a photo of the rim top to show the condition. You can see the clean bowl and the damage on the rim top and inner edge. The stem came out looking quite good. There are some scratches, tooth marks and chatter on both sides ahead of the button. 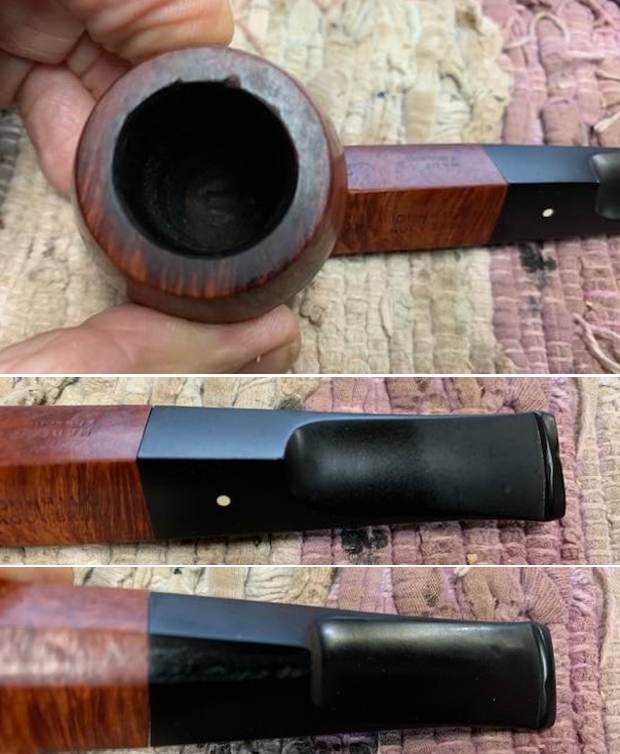 I took a photo of the stamping on the sides of the shank. The stamping is faint in spots but still very readable. It reads as noted above.

I worked on the inside edge and top of the rim with a folded piece of 220 grit sandpaper to clean up the damage. It would take some work but it looked much better.

I polished the cleaned up rim top and edges with micromesh sanding pads – dry sanding with 1500-12000 grit pads and wiping the bowl down with a damp cloth to remove the dust. The rim top came out looking very good.

I rubbed the briar down with Before & After Restoration Balm. I worked it into the briar with my fingertips. The product works to clean, enliven and preserve the briar. I let it sit for 10 minutes then I buffed it with a cotton cloth to deepen the shine. The briar comes alive with the balm. 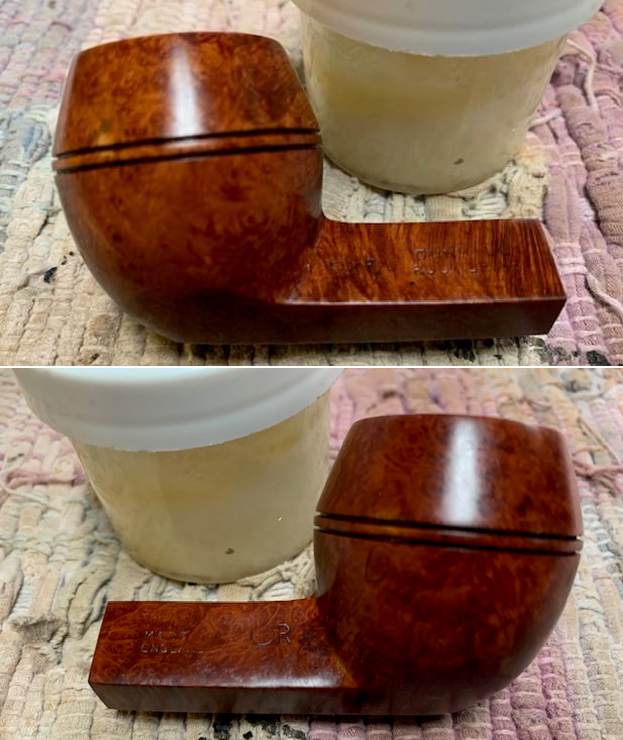 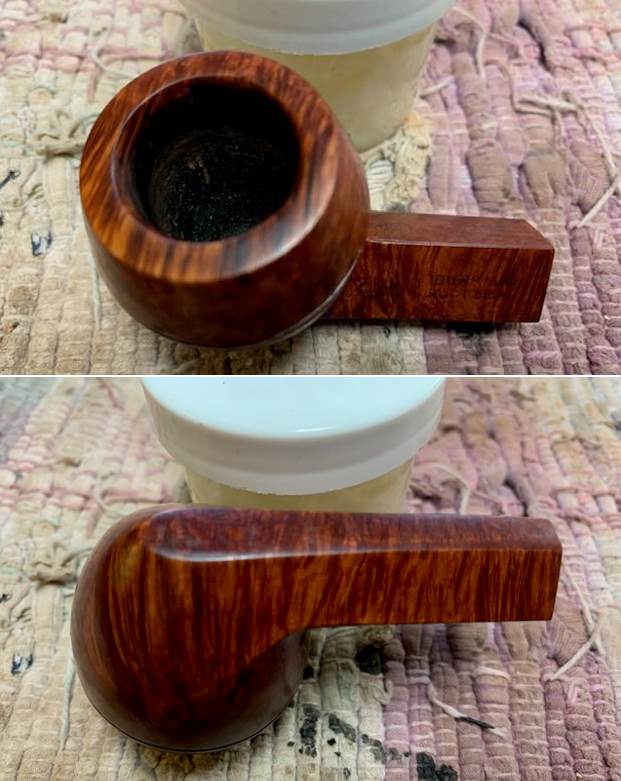 I set the bowl aside and turned to address the stem issues. I filled in the deep tooth marks in the vulcanite with clear CA glue. Once it cured I used a small file to flatten the repairs. I sanded them with 220 grit sandpaper to blend it into the surface of the stem. I started the polishing with a 400 grit wet dry sandpaper. 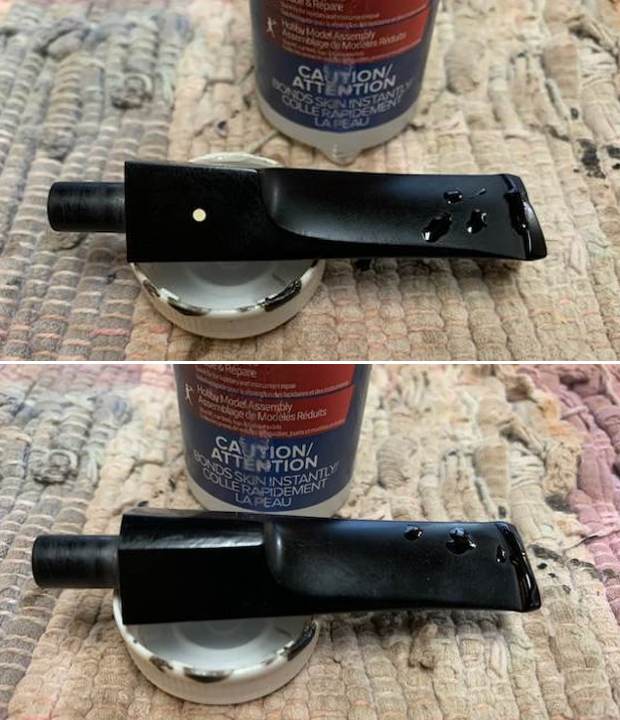 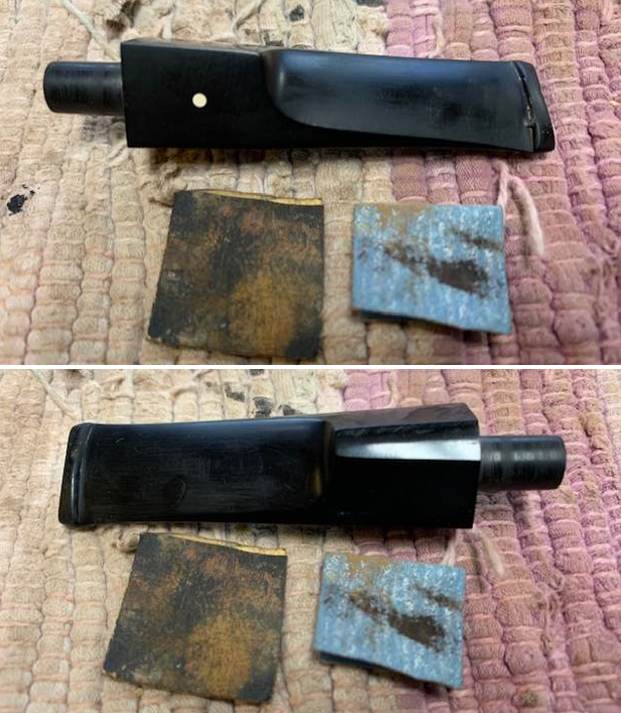 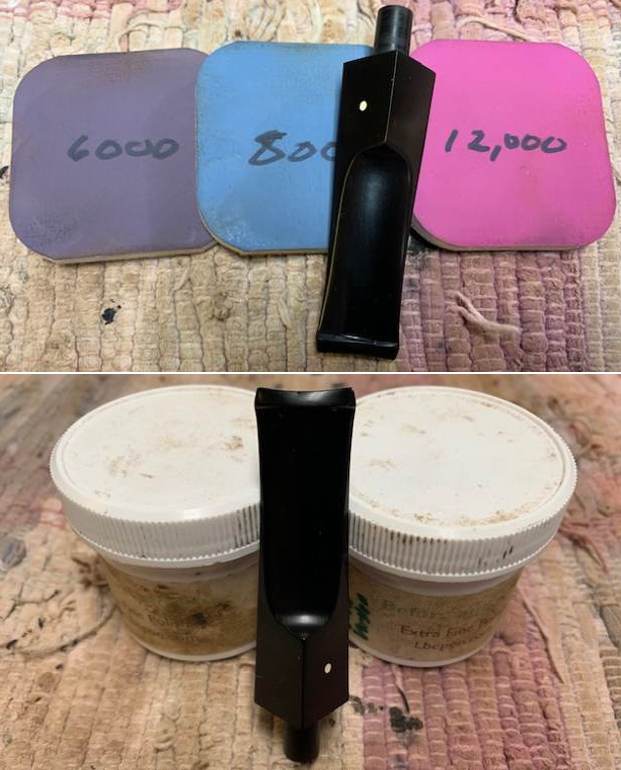 This 1969 Dunhill Root Briar OX F/T Bulldog with a Saddle Stem has a smooth Dunhill finish that has some great grain. The polished light brown stain highlights some great grain around the bowl and shank. The polished black vulcanite saddle stem adds to the mix. I put the stem back on the bowl and buffed the pipe with Blue Diamond on the buffing wheel being careful to not buff the stamping. I gave the bowl and the stem multiple coats of carnauba wax on the buffing wheel and followed that by buffing it with a clean buffing pad. I hand buffed the pipe with a microfiber cloth to deepen the shine. The finished Dunhill Root Briar OX F/T Bulldog is quite nice and feels great in the hand. Give the finished pipe a look in the photos below. The dimensions of the pipe are Length: 5 ½ inches, Height: 1 ¾ inches, Outside diameter of the bowl: 1 ¼ inch, Chamber diameter: 7/8 of an inch. The weight of the pipe is 1.55 ounces/44 grams. Thanks for walking through the restoration with me as I worked over another beautiful pipe. If you are interested in adding it to your collection I will be adding it to the British Pipe Makers Section of the rebornpipes store. Thanks for your time. 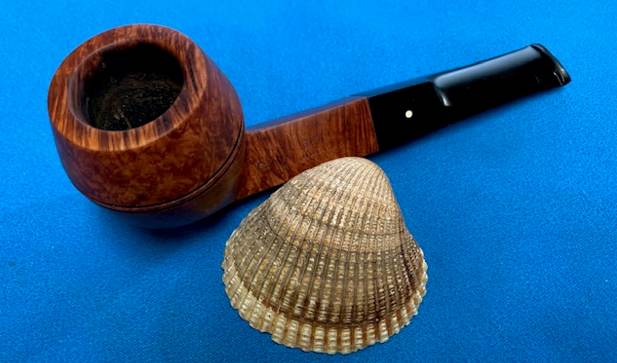 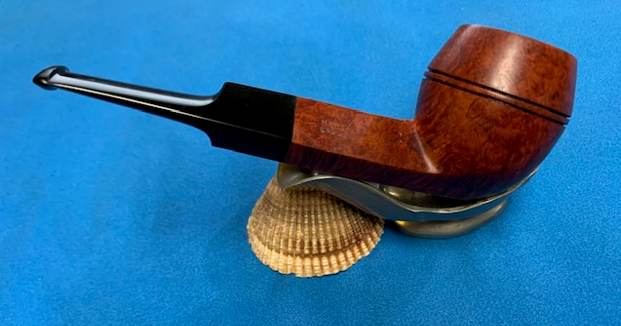