This particular Freehand pipe came in a lot that Jeff and I purchased on early in 2020 from a woman in Australia who had contacted us about selling her late husband’s collection. He had some beautiful pipes in his estate and this was one of them. It is stamped on the underside of the shank and reads Rungsted [over] Mariner [over] Hand Made [over] In [over] Denmark. It is a mixed finish pipe with the majority of the lower 2/3 of the bowl sandblasted with a deep and rugged blast. The top third of the bowl and shank are smooth finished while the rim top and shank end are plateau finished. The pipe had a moderate cake in the bowl and there was dust and debris in the plateau valleys and in the valleys of the sandblast. The original stem had the Rungsted logo on the top of the blade of the fancy turned vulcanite saddle. It was lightly oxidized and had tooth marks and chatter on both sides near the button. There was also some calcification around the sharp edge of the button that would need to be cleaned out. The pipe was dirty but still a beauty. Jeff took photos of the pipe before he started his work on it. 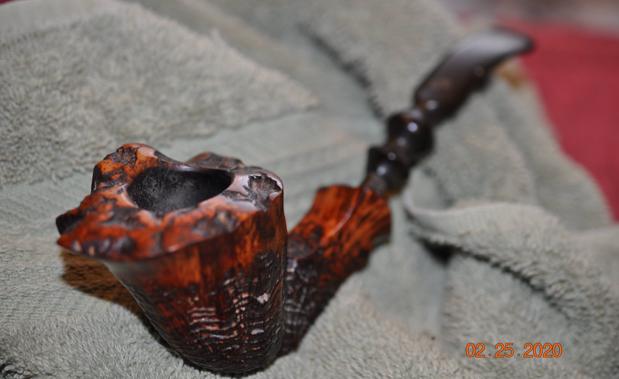 Jeff took photos of the rim top and the stem to show the condition of the pipe when we received it. You can see the cake in the bowl and the sandblast of the bowl sides and the plateau of on the rim top and shank end. The rim edges appear to be very clean. The stem is vulcanite and is oxidized, calcified and has chatter and a few deep tooth marks on both sides near the button.

He took photos of the sides of the bowl and the heel to give an idea of the shape and the condition of the briar around the bowl. It really is a nicely shaped pipe that has the classic look of a Freehand carved by Preben Holm. 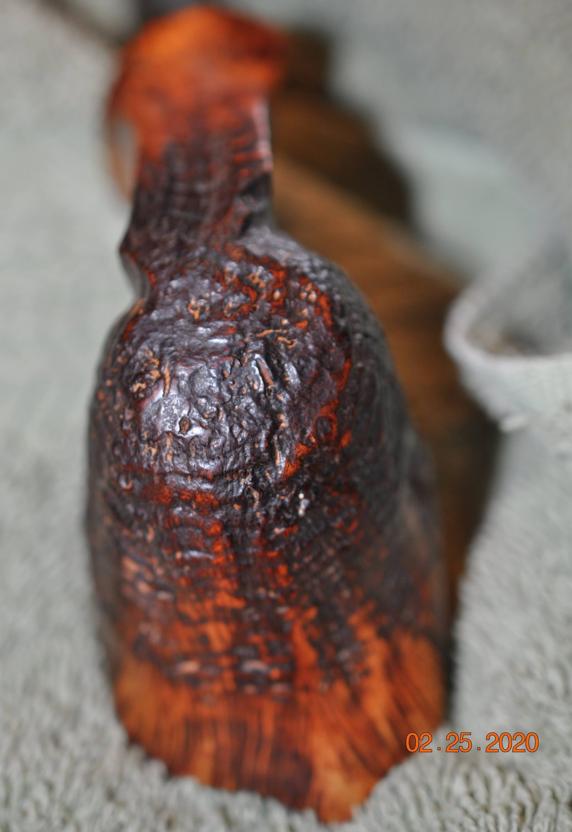 The next photos Jeff took show the stamping around the smooth briar on the underside of the shank. It is clear and readable as noted above. It took several photos to capture the stamping but it is clear. The last photo shows the stem logo.

In a previous blog I had researched the brand quite a bit. I have included it in full below for information on this pipe (https://rebornpipes.com/2017/10/15/restemming-and-reconditioning-a-rungsted-mariner-by-preben-holm/). I quote:

I don’t know when I learned that the Rungsted line of pipes was another line that Preben Holm carved. But I learned that he made several lines outside the Ben Wade contract pipes he was producing for Snug Harbor/Lane. This was confirmed when I looked online and found a thread on PipesMagazine.com. The discussion covered a brand called Britta Bech and one of the members there happened to mention and confirm what I already knew about the Rungsted line. From my memory and the speaker’s the pipes were mostly carved in the mid to late 70’s or early 80’s during the height of the Danish Freehand pipe craze in the US. The speaker there said that though some refer to these as seconds he did not think that was accurate and that really it was a totally separate line from Preben Holm. I would agree with his assessment on this. I am pretty certain looking at the various Rungsted pipes that I have worked on that there are no flaws. They all combine both smooth and sandblast finishes and present a really interesting finished pipe. (mlaug on pipesmagazine.com http://pipesmagazine.com/forums/topic/preben-holm-info-needed).

Now it was time to move on to this particular Rungsted Mariner pipe. Jeff did a great job cleaning off the debris and grime on this old. He reamed it with a PipNet reamer and smoothed the walls of the bowl with a Savinelli Fitsall pipe knife. He scrubbed out the mortise and the airway in the shank and the stem with alcohol, cotton swabs and pipe cleaners. He scrubbed the exterior of the bowl, rim and shank with a tooth brush and Murphy’s Oil Soap to the oils and tars on the bowl, rim and shank. He rinsed it under running water. He dried it off with a soft cloth. Once the grime was removed the finish underneath was in stellar condition. The rich patina of the older briar was a variegated finish of smooth and sandblast looked great. He scrubbed the exterior of the stem with Soft Scrub then soaked it in a bath of Briarville’s Pipe Stem Deoxidizer. He rinsed off the deoxidizer with warm water and wiped the bowl and stem down with a light coat of olive oil to rehydrate both. The pipe really was quite stunning. I took photos of the pipe to show its condition before I started my work on it. 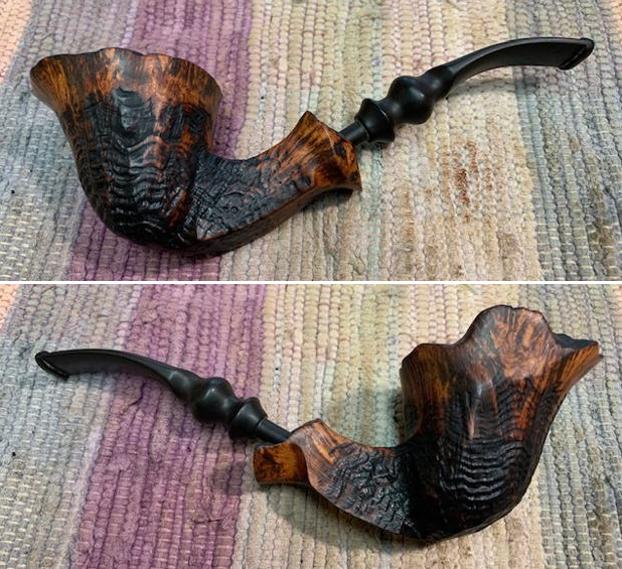 I took close up photos of the stem and the rim top to show both how clean they were and what needed to be addresses with both. The rim top and bowl were in great condition with no major issues. The stem looked better but the deep tooth marks and chatter were still present. I would need to remove those to bring the stem back.

I took a photo of the stamping on the underside of the shank. You can see from the photo that it is readable. It is clearer on the top half of the stamp than the lower but it is still readable.

I removed the stem from the bowl and took a photo of the parts to give a sense of the beauty of the pipe.

Because the bowl was in such good shape after Jeff’s clean up I moved directly to working some Before & After Restoration Balm into the surface of the briar with my finger tips and a horse hair shoe brush to get into the crevices of the sandblast and plateau. The product is incredible and the way it brings the grain to the fore is unique. It works to clean, protect and invigorate the wood. 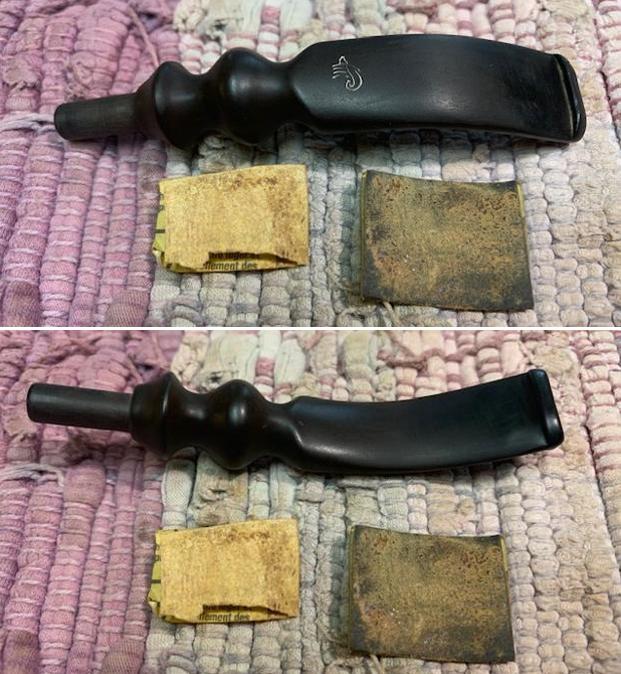 I polished the stem with micromesh sanding pads – wet sanding it 1500-12000 pads. I wiped it down with Obsidian Oil after each pad to protect it and preserve it. I polished it with Before  After Pipe Polish – both Fine and Extra Fine. I finished the polishing with a final coat of Obsidian Oil. 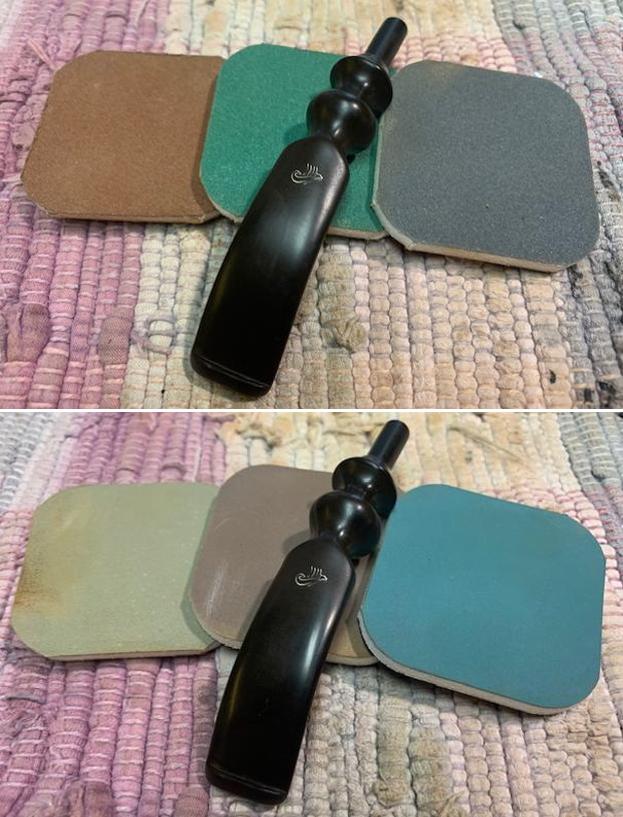 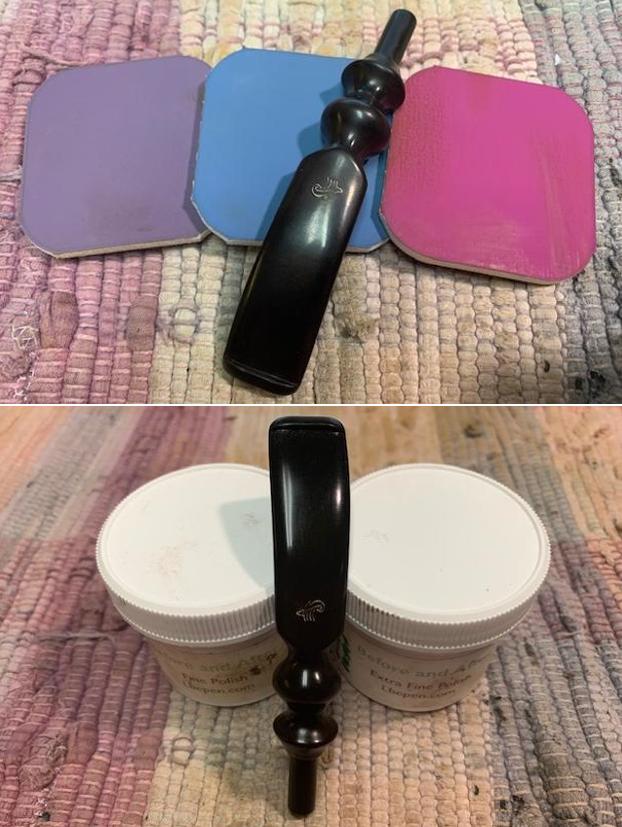 I touched up the stamp on the top of the stem with Rub’n Buff Antique Gold. I rubbed it into the stamp with a tooth pick and buffed it off with a cloth. It looked much better.

I am really happy with the way that this Preben Holm made Rungsted Mariner Freehand turned out. It really is a beautiful looking pipe with a great shape and smooth, plateau and sandblast finishes. The fancy original vulcanite saddle stem is really nice. The briar really came alive with the buffing. The rich brown and black stains of the finish gave the pipe a sense of depth with the polishing and waxing. I put the stem back on the bowl and carefully buffed the pipe with Blue Diamond on the buffing wheel using a light touch on the briar. I gave the bowl multiple coats of Conservator’s Wax and the stem multiple coats of carnauba wax on the buffing wheel. I buffed the pipe with a clean buffing pad to raise the shine. I hand buffed the pipe with a microfiber cloth to deepen the shine. The finished Rungsted Mariner really is a beauty and feels great in the hand and looks very good. Give the finished pipe a look in the photos below. The dimensions of the pipe are Length: 7 inches, Height: 2 ¼ inches, Outside diameter of the bowl: 2 ½ inches long x 2 inches wide, Chamber diameter: 1 inch. The weight of the pipe is 83 grams/2.93 oz. The pipe will be going on the rebornpipes store soon. It will be in the section on Danish Pipe Makers if you would like to add it to your collection. Thanks for reading this blog and my reflections on the pipe while I worked on it. It was a fun one to work on! 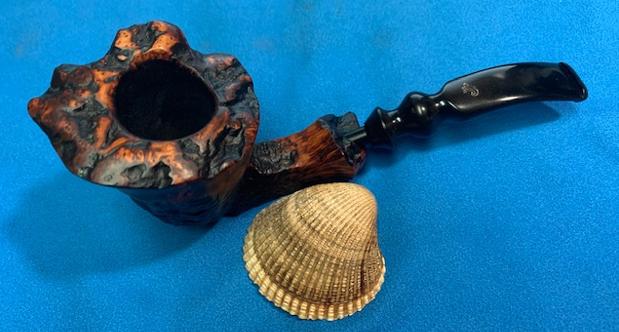 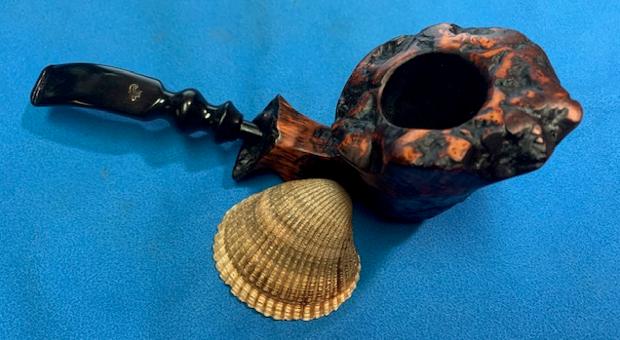 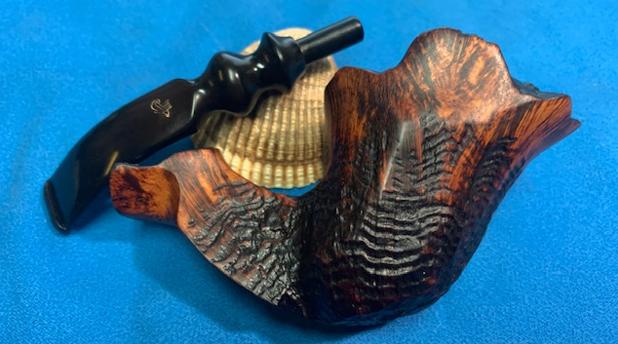 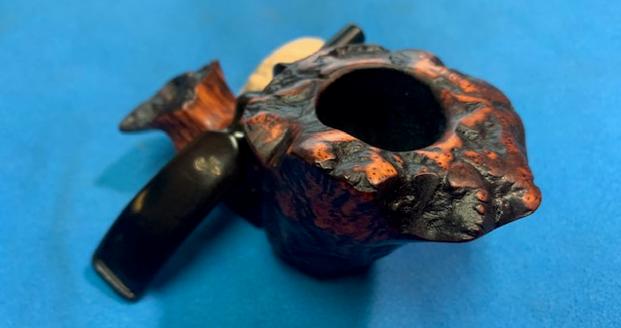 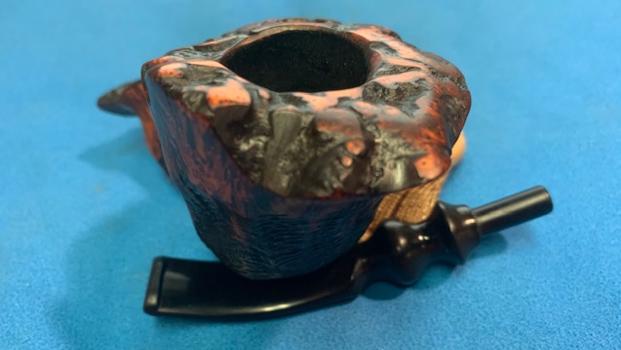