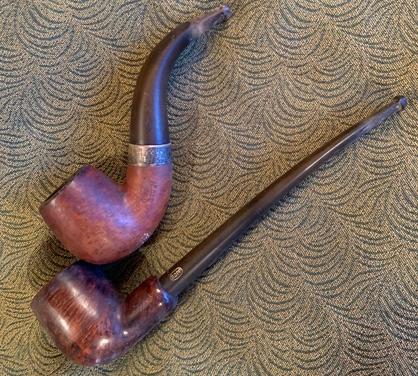 It seems like just a few weeks ago I was contacted by an older gentleman about purchasing his pipe collection. He sent me the photos and I was amazed at what I saw. He had Dunhill pipes, BBB pipes, a Barling’s Make “Ye Olde Wood” Fossil, Orlik pipes, Barclay Rex Pipes, a couple of Meerschaums and a whole lot of other pipes. All I could say as I looked at the pipes was what a collection it was. We negotiated a deal and I think we both walked away quite happy with the exchange.

You have seen the work we have done on the Dunhills, Hardcastles, H. Simmons all briar billiard and BBB pipes from the lot but there are still more. The above photo shows the two Ropp pipes.

I have worked on several Ropp pipes in the past but this one was unique in many ways that will become evident in the photos below. This second Ropp pipe is stamped on the left side of the shank and reads ROPP in an oval [over] AU SOMMET, which translates as AT THE TOP. The stamping is clear and readable and there is no shape number evident. The shank end is rounded and countersunk to give the stem a tight fit against it. The long, taper stem has a gold ROPP oval stamp on the left side.

Jeff took some photos of the Ropp Au Sommet Mini Churchwarden before he worked his magic in cleaning up the pipe. It is a an interesting pipe with a lot of potential and what appears to be some great grain under the grime and debris of the years.

Jeff took photos of the bowl, rim top to show the thickness of the cake in the bowl and the thick lava on the rim top. I was hoping that the thick cake and lava had protected the edge from the kind of damage that I had to work on with the other Ropp pipe. He took photos of the top and underside of the vulcanite stem showing the oxidation, tooth marks,chatter and wear on the stem and button. 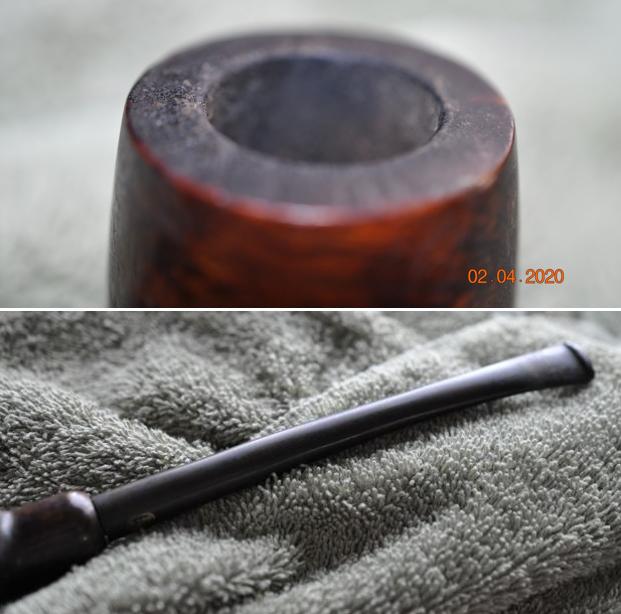 Jeff took a photo of the stamping on the left side of the shank. The ROPP Oval on the stem is also visible. You can see that the stamping  on the shank and stem is clear and readable as noted above.

Jeff removed the stem from the shank to give an idea of the way the rounded shank end had been beveled to accommodate the stem. 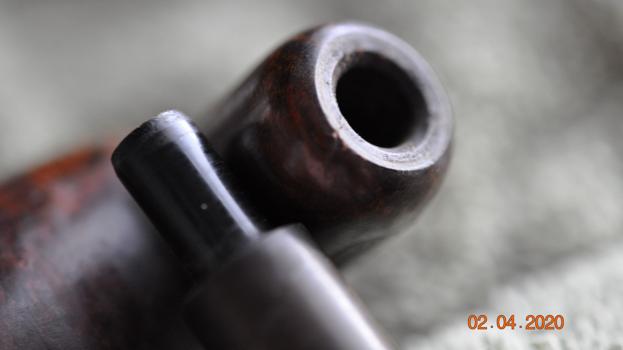 I turned to Pipephil’s site to see what I could learn about the Ropp brand and particularly the Ropp Au Sommet Line that I was working on (http://pipephil.eu/logos/en/logo-ropp.html). I quote from the introduction to the brand on the site and include a screen capture of a poster that was on the site. 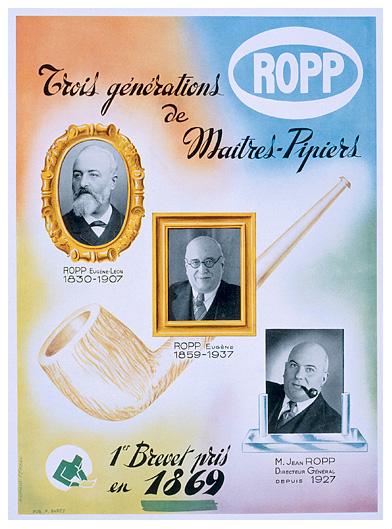 I turned to Pipedia to try and place this pipe in the timeline of the brand and was able find some helpful information which I have included below (https://pipedia.org/wiki/Ropp). I quote the information below. Ropp is well known for its Cherrywood pipes which were patented in1869. Besides that Eugene Ropp also made beautiful briar pipes.

With the information from Pipedia (thought there was nothing specific on this line) I knew that I was working on an older pipe from the Eugene Ropp Workshop. It is a great piece of briar with chunky nicely made shape. The fellow we bought them from said that he had had this pipe for a very long time. I could not set a date for certain but my guess was early 30s or 40s like some of the earlier pipes. Now it was time to work on the pipe. 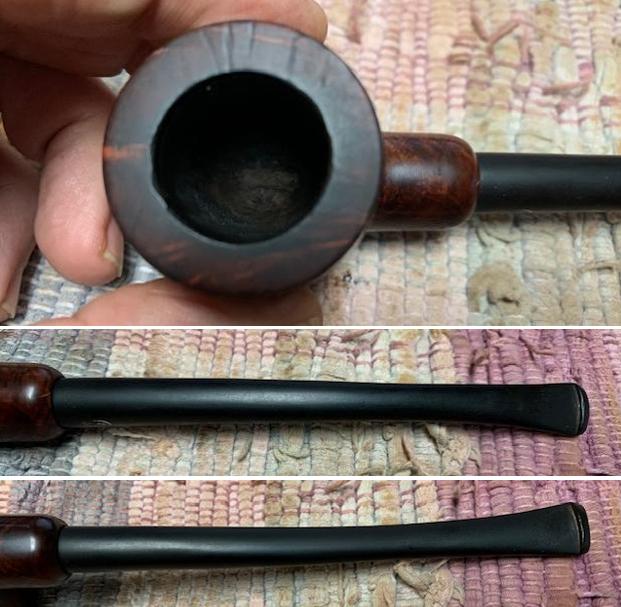 I removed the stem from the shank and took a photo of the parts of the pipe. It is a unique looking pipe. 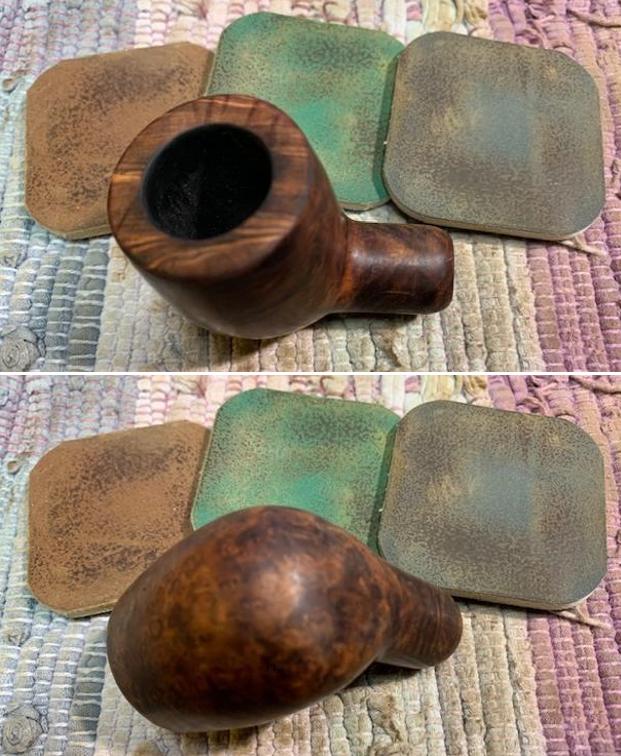 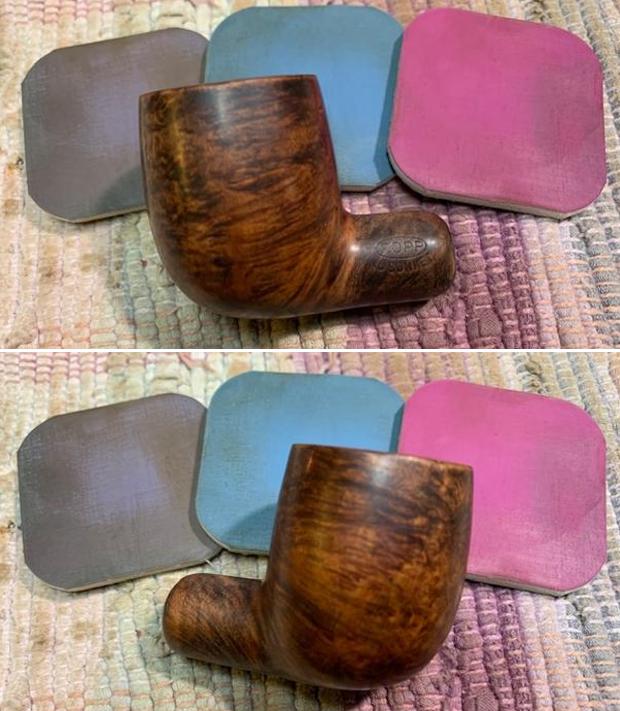 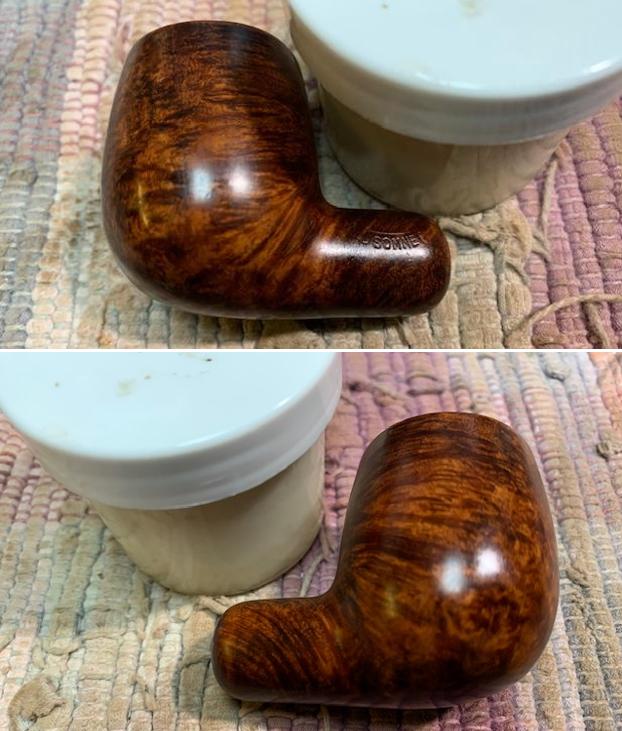 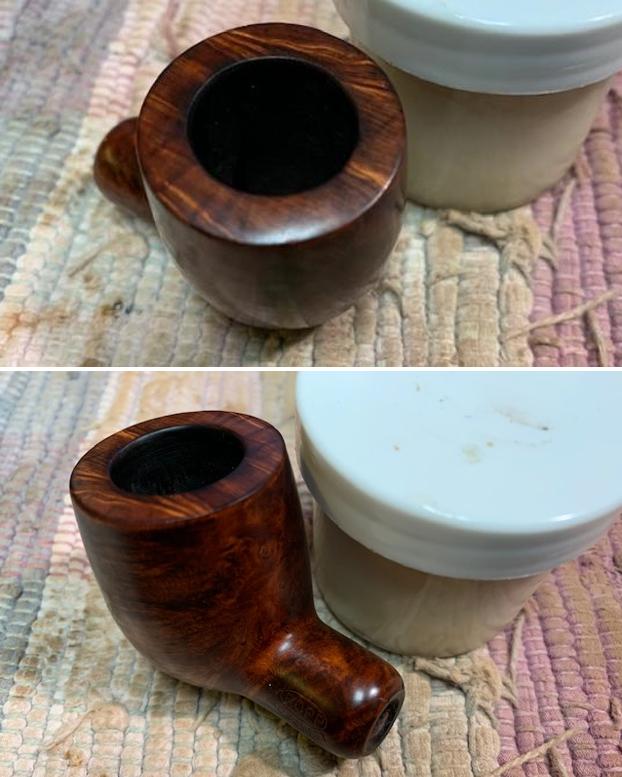 I set the bowl aside and turned my attention to the stem. I polished the stem with micromesh sanding pads – dry sanding with 1500-12000 grit sanding pads. I wiped it down after each sanding pad with Obsidian Oil. I polished it with Before & After Pipe Stem Polish – both Fine and Extra Fine. I gave it a final coat of Obsidian Oil. 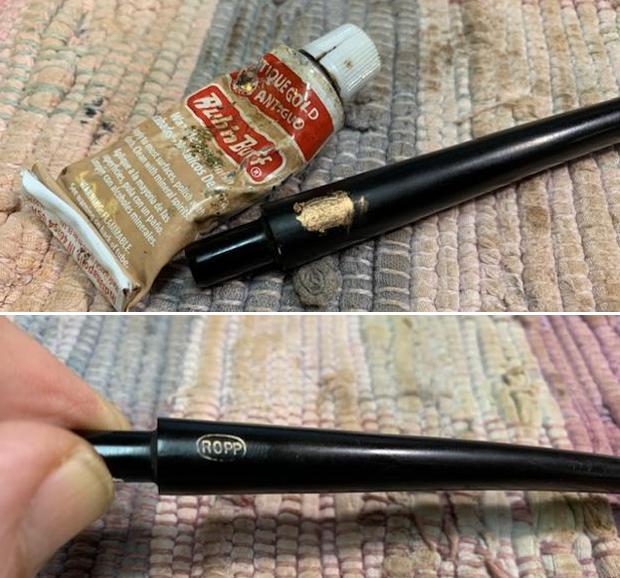 With the bowl and the stem finished I put the beautiful Eugene Ropp Au Sommet Mini Churchwarden back together and buffed it on the wheel using Blue Diamond to give it a shine. I gave the bowl and the stem multiple coats of carnauba wax on the wheel. I buffed it with a clean buffing pad to raise the shine. I hand buffed it with a microfiber cloth to deepen the shine. It really is a great looking mini churchwarden. The dimensions of the pipe are – Length: 7 ½ inches, Height: 1 ¾ inches, Outside diameter of the bowl: 1 ¼ inches, Chamber diameter: ¾ of an inch. The weight of this large pipe is 1.52 ounces /43 grams. This older Ropp Mini Churchwarden is another great find in this collection. I will be putting it on the rebornpipes store soon. If you would like to add it to your collection let me know. This is another pipe that has the possibility of transporting the pipe man or woman back to a slower paced time in history where you can enjoy a respite. Thanks for walking through the restoration with me. 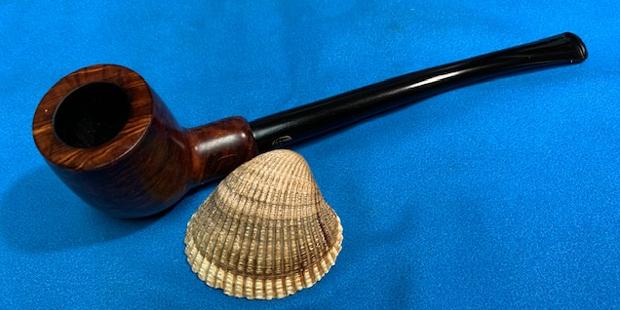