The next pipe on the work table is an Edward’s pipe that we bought from a fellow in Los Angeles, California, USA. It is a classic Prince in terms of the flow of the stem and shank. The bowl had a thick cake and lava overflow on the rim. It was hard to estimate the condition of the rim top with the cake and lava coat but I was hoping it had been protected from damage. The bowl was smooth and a natural finish. The finish was dusty and tired but had some nice grain under the grime and the finish appeared to be in good condition. There were small fills all around the right side of the bowl. A lot would be revealed once Jeff had worked his magic on it. The stem was dirty but came with tooth chatter and deep tooth marks near the button on both sides. Jeff took photos of the pipe before he started his cleanup work. 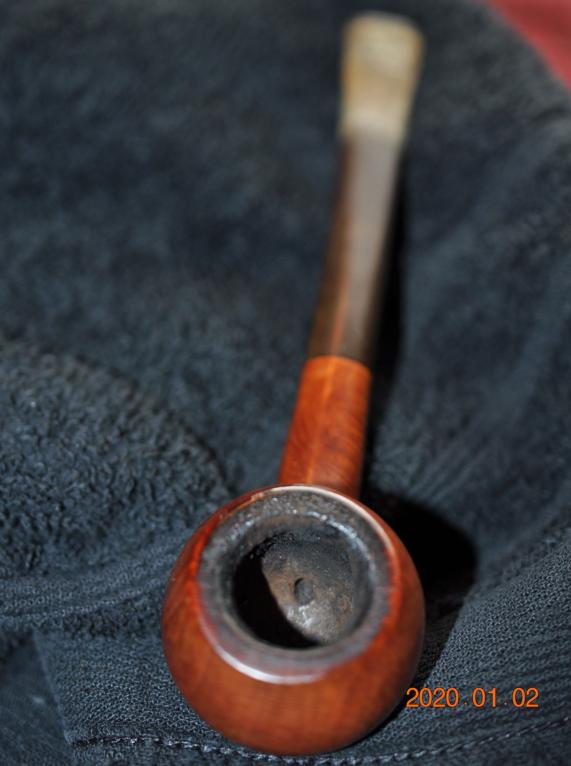 Jeff captured the condition of the bowl and rim top with the next series of photos. You can see the work that is ahead of us in the photos. The cake is very thick and heavy. The rim looked like it might have some damage on the back inner edge of the bowl. The next two photos of the stem show the top and underside of the stem. It is oxidized and calcified an you can see the tooth marks and chatter on the surface of both sides. 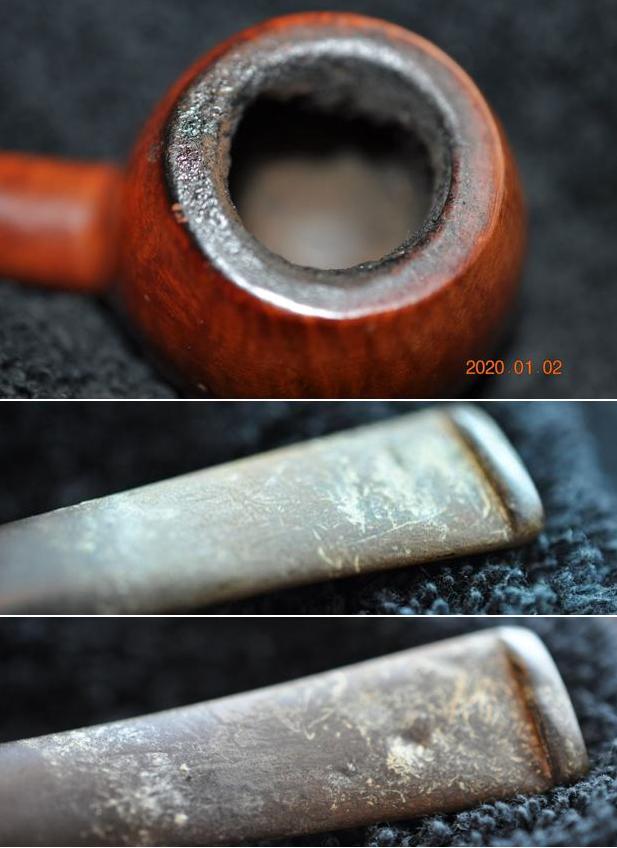 Jeff took some great photos of the sides of the bowl and heel showing what is underneath the grime and debris of time and use. You can see the fills in briar on the right side. It will be interesting to see what happens as the pipe is cleaned and restored.

He captured the stamping on the sides of the shank. They are clear and readable. The left side reads Edwards. On the right side it reads Algerian Briar 706M5.

I turned to Pipedia to have a look at a bit of history on the brand and refresh my memory of the pipe line (https://pipedia.org/wiki/Edward%27s). I quote the article in full below.

Edward’s pipes were originally produced in Saint-Claude, France when Francais actually was a world-class pipe maker with longstanding business & political connections to Colonial Algeria that allowed them to obtain the finest briar.

During the tumultuous 1960’s, Edward’s created a business model to offer the finest briar available in both Classic and Freehand shapes – all at a fair price. They bought the company & equipment and cornered the market on the finest, choice Algerian Briar just before the supply vanished in political turmoil of Algeria’s independence. Edward’s packed up both machinery and briar-treasure to America, safely caching the essentials to create a new pipe-making dynasty. This was a coup, for the 70’s and 80’s were grim years for pipe smokers as quality briar all but disappeared.

Edward’s Design Philosophy is hard to pin down, think of their style as the “American Charatan” with unique & clever twists all their own. Today, they fashion pipes in several locations across the USA. All of Edward’s pipes are Algerian Briar – a fact very few pipe companies can claim, and all are oil-cured utilizing natural finishes – no strange concoctions are used to interfere in your tastebud’s dance with the briar. Algerian, Calabrian, Sardinian, Corsican – take your pick, but Algerian Briar is generally considered the finest smoking briar ever used. When combined with oil-curing, Algerian takes on a magical quality that even Alfred Dunhill recognized as far back as 1918 as the choice for both his Bruyere and Shell.

Now it was time to work on the pipe. I took it out of the box from Jeff and looked it over. It was amazingly clean and looked like a different pipe. He reamed it with a PipNet pipe reamer and cleaned up the reaming with a Savinelli Fitsall Pipe Knife. He scrubbed out the internals with alcohol, pipe cleaners and cotton swabs until the pipe was clean. He scrubbed the exterior of the bowl with Murphy’s Oil Soap and a tooth brush to remove the grime and grit on the briar and the lava on the rim top. The bowl looked very good. Jeff scrubbed the stem with Soft Scrub to remove the grime and soaked it in Before & After Deoxidizer. When he took it out of the soak it came out looking far better. I took photos before I started my part of the work.

I took some photos of the rim top and stem. The rim top is clean but there is a lot of damage to the inner edge on the front half of the bowl. The bowl itself looks very clean. The close up photos of the stem shows that is it very clean and the deep tooth marks are very visible. It almost looks as if the  previous owner had lightly carved grooves to emulate a dental bit on the top of the stem.

I took photos of the stamping because they had cleaned up very well.

I removed the stem from the shank and took a photo of the bowl and to give a sense of the proportion of the pipe. It is a classic Prince for sure.

I decided to take care of the damage on the rim top and inner edge first. I worked over the inner edge with a folded piece of 220 grit sandpaper and repaired the existing bevel to obscure the damage to the edge. Once I had finished the bowl was round and the edge looked very good.

I polished the briar and the shank with micromesh sanding pads – dry sanding with 1500-12000 grit pads. I was able to blend in the repairs into the side of the bowl. I wiped the bowl down after each pad with a damp cloth. The grain really began to stand out and the finish took on a shine by the last sanding pad. The photos tell the story! 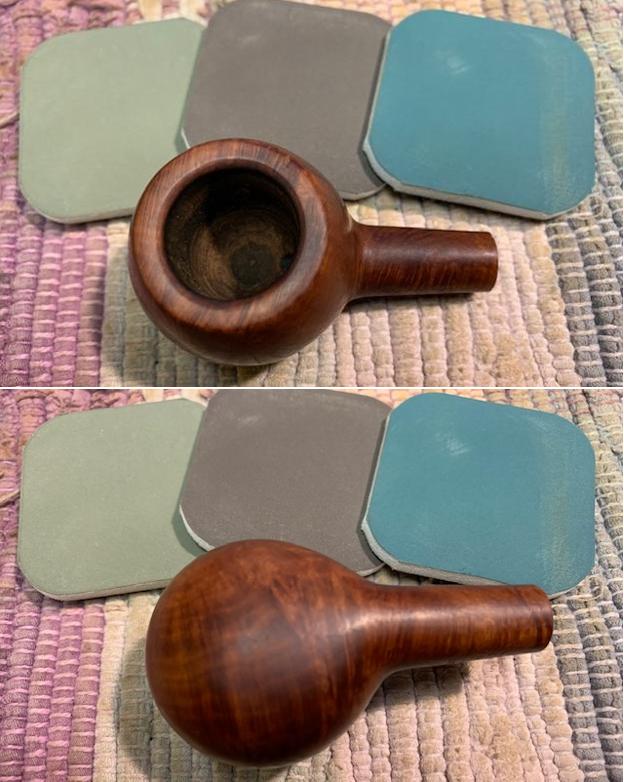 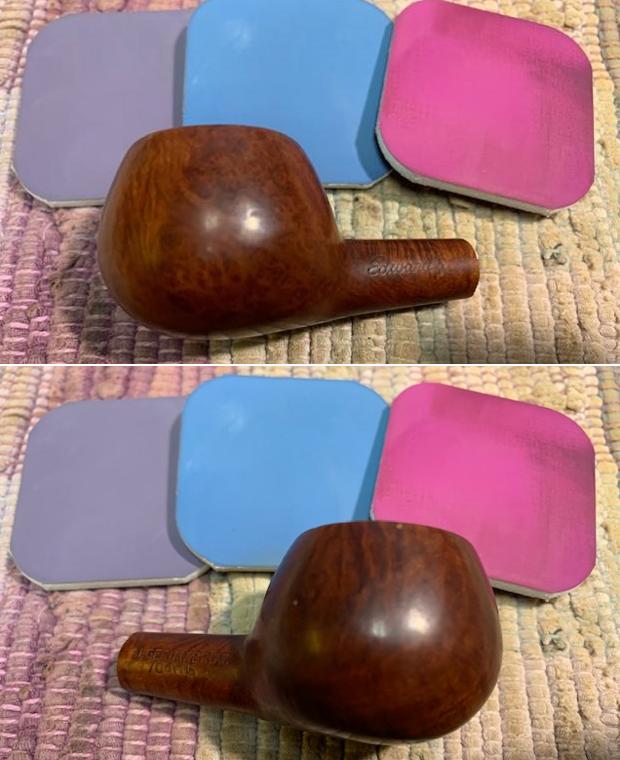 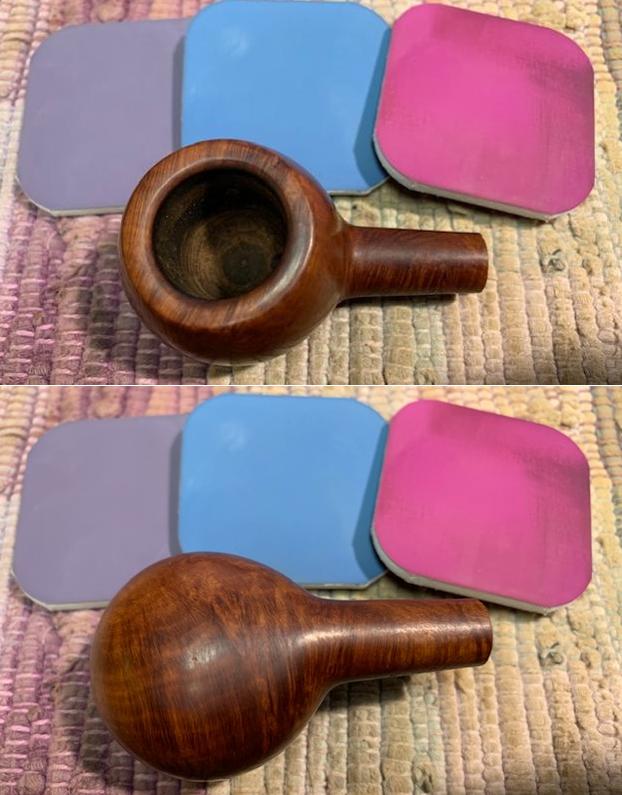 I worked some Before & After Restoration Balm into the surface of the smooth briar with my fingertips. The product works to clean, enliven and protect the briar. I let the balm sit for about twenty minutes and then buffed with a cotton cloth to raise the shine. The photos show the bowl at this point in the restoration process.

I set the bowl aside and turned to deal with the stem. I “painted” the surface of the stem with the flame of a Bic lighter to lift the tooth marks on the underside and grooves on the top side. I was able to lift most of them significantly. The few that remained I filled in with Loctite 380 CA glue. Once it had hardened I sanded it with 220 grit sandpaper and 400 grit wet dry sandpaper to blend it into the surface of the vulcanite. 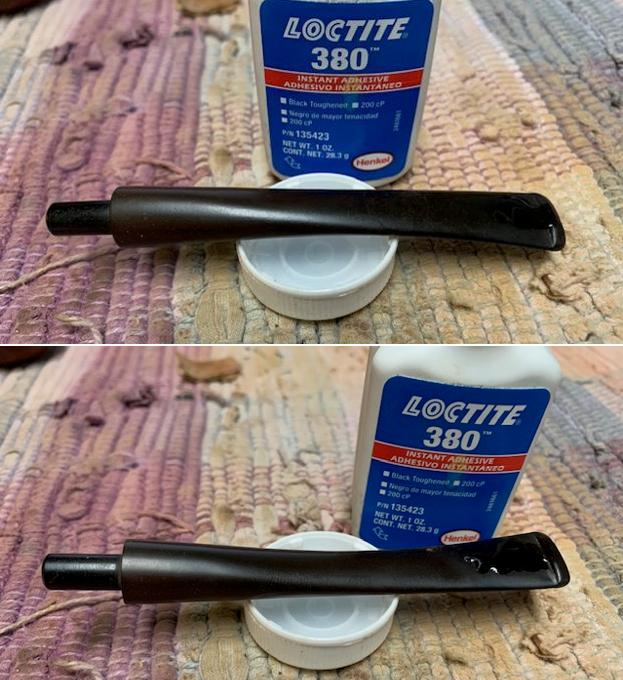 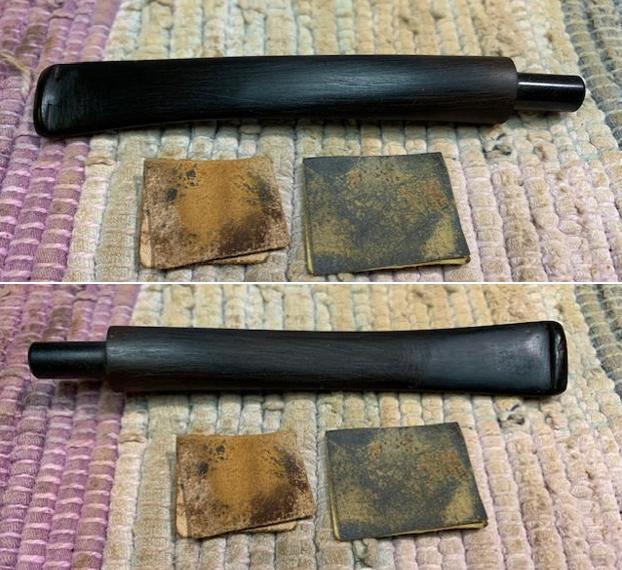 I polished the vulcanite stem with micromesh sanding pads – dry sanding with 1500-12000 grit sanding pads. I wiped it down after each sanding pad with a cloth containing some Obsidian Oil. I finished polishing it with Before & After Pipe Stem Polish – both Fine and Extra Fine and buffed it off with a cotton cloth. One irritation for me is that the repairs of the grooves on the topside with the Loctite 380 CA glue are not quite the same black as the stem surface. Because of that the grooves in the stem show even though they are smooth too the touch!! Arghhh. 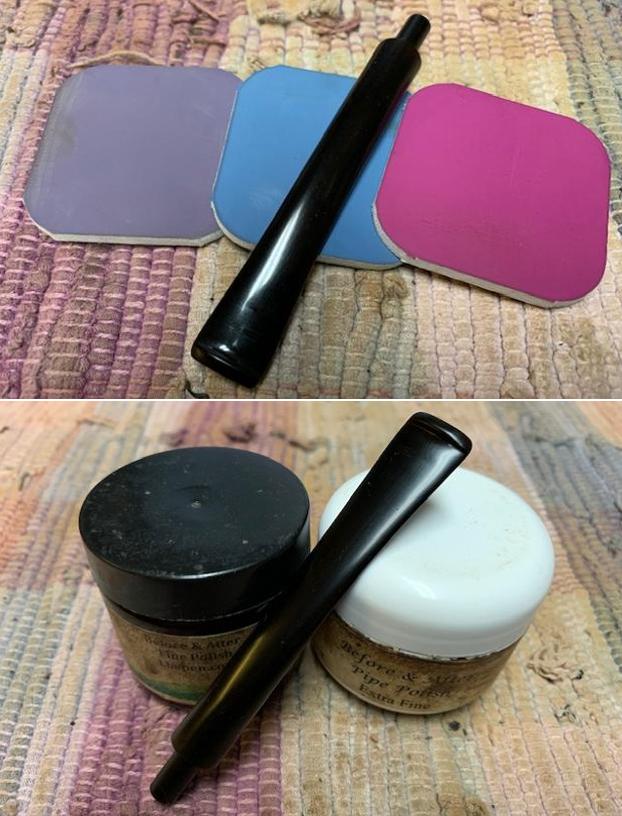 This oil cured Edward’s Algerian Briar 706M5 Prince was another fun pipe to work on and I really was looking forward to seeing it come back together again. With the grime and debris gone from the finish it was a beauty and the grain just pops at this point. I put the stem back on the bowl and buffed the pipe with Blue Diamond on the buffing wheel. I carefully avoided the stamping on the shank during the process. I gave the bowl and the stem multiple coats of carnauba wax on the buffing wheel and followed that by buffing it with a clean buffing pad on the buffer. I hand buffed the pipe with a microfiber cloth to deepen the shine. The rich natural finish on the bowl looks really good with the polished black vulcanite stem. It is very well done. Give the finished pipe a look in the photos below. I can only tell you that it is much prettier in person than the photos capture. The dimensions of the pipe are Length: 6 inches, Height: 1  ¼ inches, Outside diameter of the bowl: 1 ¼ inches, Chamber diameter: ¾ of an inch. The weight of the pipe is 35grams/1.23oz. This is truly a great looking Edward’s. Thanks for walking through the restoration with me as I worked over another beautiful pipe. I will be adding it to the American Pipe Makers section of the rebornpipes store soon. If you want to add it to your collection send me an email or a message! Thanks for your time. 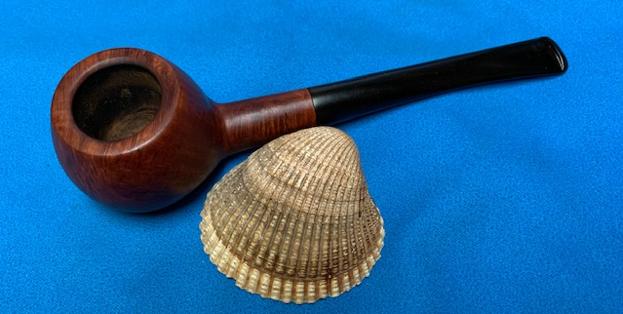 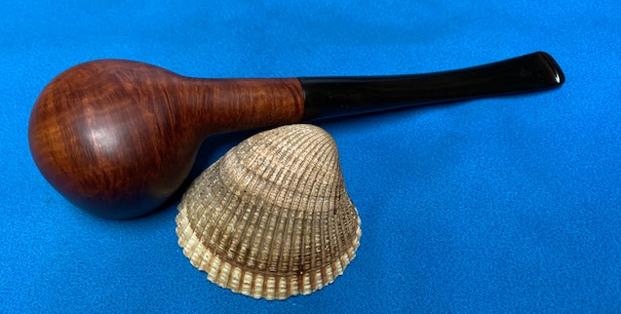 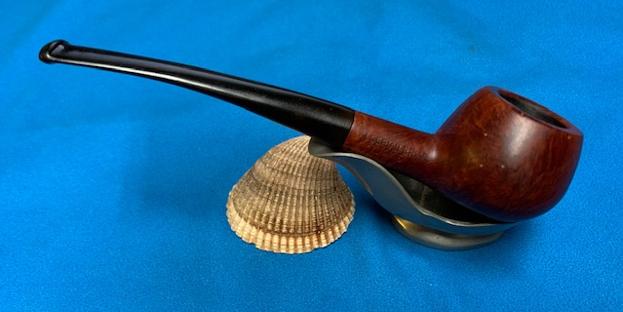 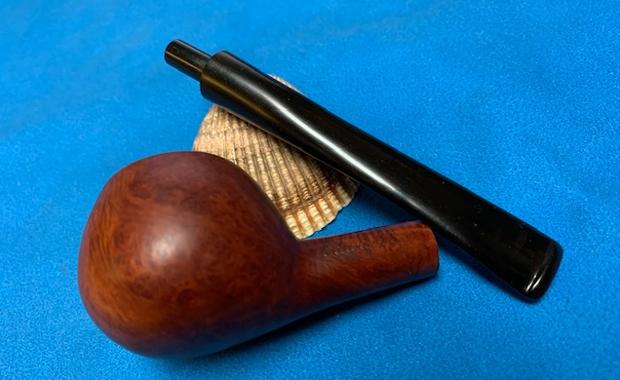 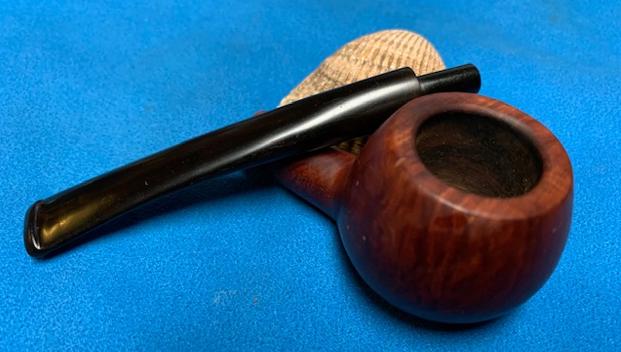 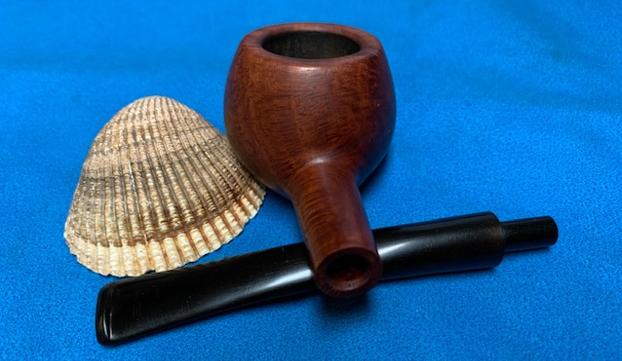