I have been working on Peterson’s pipes from my friend’s estate for the last little while and I needed a break from them for a while. I chose to work a Canadian Made Brigham Mixed Grain Lovat for a change of pace. The Lovat was stamped on the underside of the shank with faint stamping visible with a lens under light. It reads Can. Pat. 372982 followed by Brigham underlined and in script. On the heel of the bowl it was stamped with the shape number 299. There was a thick cake in the bowl with remnants of tobacco stuck on the walls. There was a lava overflow on the rim. The top and edges of the rim appear to have some damage. There is damage all the way around the outside edges of the bowl. The grain on the smooth portion of the bowl was a combination of grains. Once again, I think that there was a beautiful pipe underneath all of the buildup of years of use. The stem was oxidized and calcified toward the end with some tooth chatter. There were also some tooth marks on both sides of the stem ahead of the button and on the button surface itself. There was a pattern of two brass dots on the left side of the saddle stem. Jeff took photos of the pipe before he started his cleanup work on it. 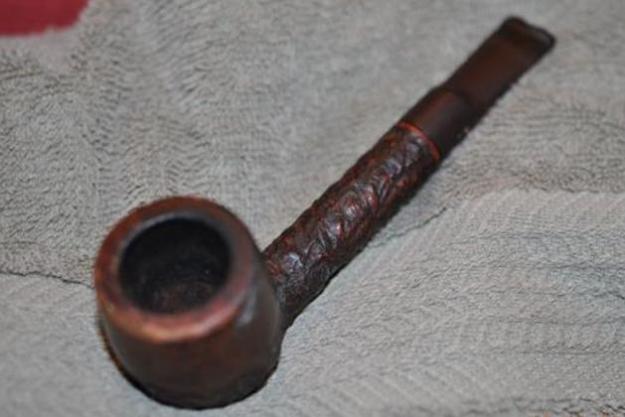 Jeff took photos of the bowl and rim top to show the thick, hard cake in the bowl with remnants of tobacco stuck on the walls of the bowl. There was a lava build up on the top of the rim and the edges of the bowl. The rim top had a lot of scratching and damage on the top and around the inner and outer edges. It looked like it had been used for a hammer. He took photos of the top and underside of the stem showing the tooth chatter, scratching and oxidation on the stem surface and wear on the edges of the button. 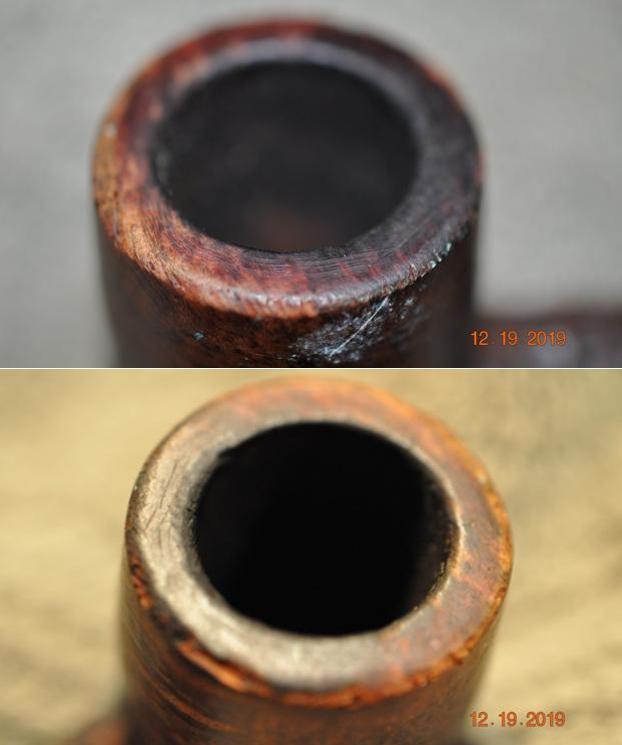 Jeff took a photo of the side and heel of the bowl to show the condition of the finish. You can see the beautiful grain around the smooth portions on the top half of the bowl. The rustication is well done and rugged. Even under the dirt and debris of the years it looked very good. 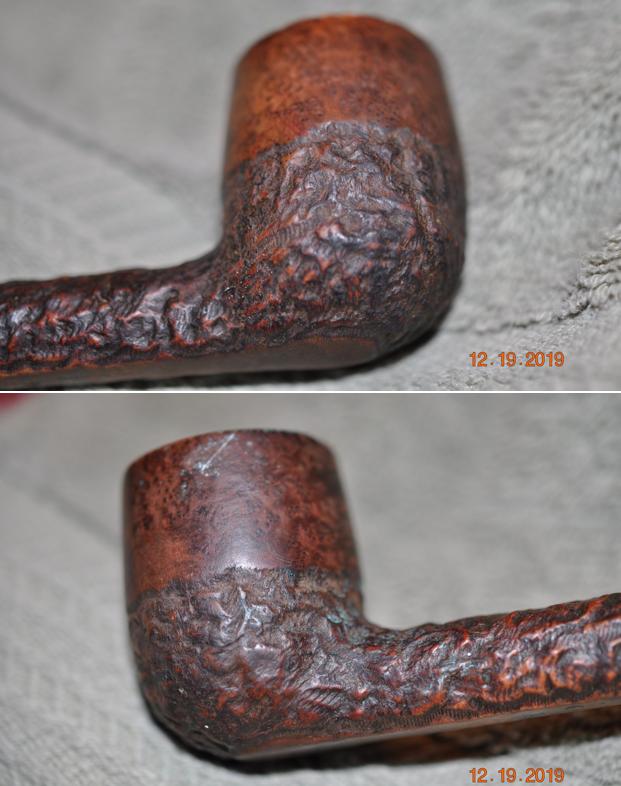 The stamping is very faint and cannot be captured very well even with a flash. What you can see reads as noted above. He included a pic of the two brass dots on the stem. 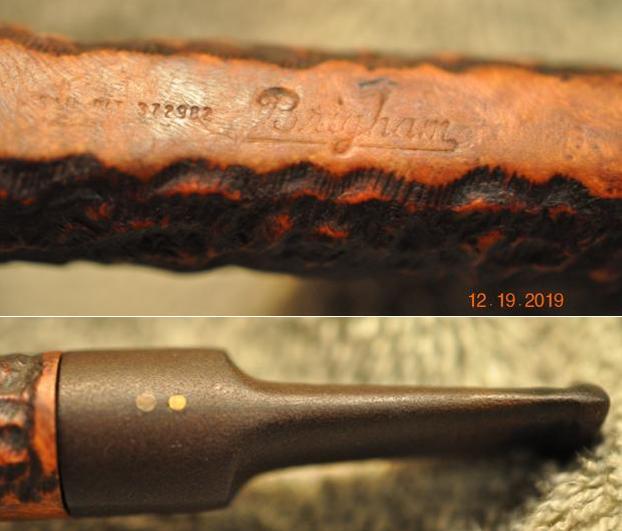 For the needed background I am including the information from Pipedia on Brigham pipes. It is a great read in terms of the history of the brand (https://pipedia.org/wiki/Brigham_Pipes). Charles Lemon (Dadspipes) is currently working on a book on the history of the brand. Until that is complete this article is a good summary. I have included it below.

I have written to Charles Lemon (Dadspipes) previously about Patent Number pipes and since this was another one I referred to a previous blog I had written about the stamping on a 2199 Lovat shaped pipe. He responded with information that I am including in part below.

Hey Steve! Good to hear from you.

Shape 2199 is what most would call a Lovat. Brigham called it a Club for whatever reason- just to be different, perhaps!…As these are all Patent pipes, it’s more accurate to refer to their grade by name (the post 1980 grading scheme refers to Dots). Here is the original scheme: 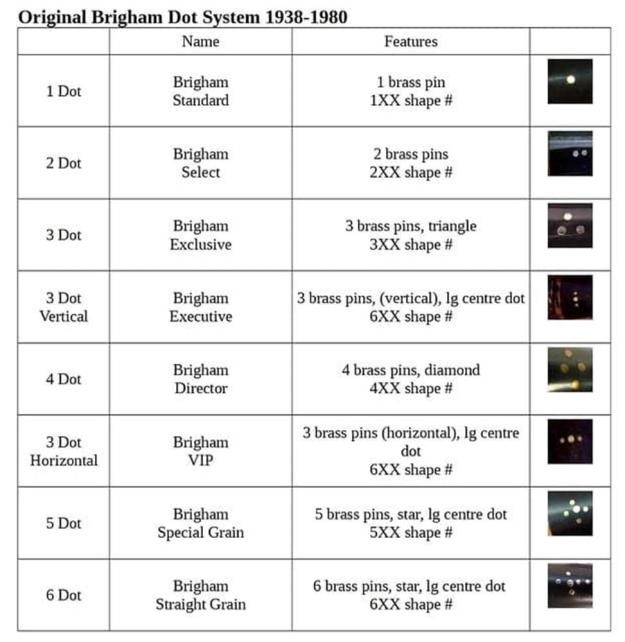 With the information from Charles’ message and the chart above that he included I knew what I was dealing with in terms of the stamping and the age of this pipe. I learned that this Patent Era 299 (the 2XX shape number) is a Brigham Select (2-Dot) Lovat or what they call a Club. It was made between 1938 and 1955. Now it was time to work on the pipe.

I am really happy to have Jeff’s help on cleaning up the pipes that we pick up along the way. He cleaned this filthy pipe with his usual penchant for thoroughness that I really appreciate. This one was a real mess and I did not know what to expect when I unwrapped it from his box. He reamed it with a PipNet pipe reamer and cleaned up the reaming with a Savinelli Fitsall Pipe Knife. He scrubbed out the internals with alcohol, pipe cleaners and cotton swabs until the pipe was clean. He scrubbed the exterior of the bowl with Murphy’s Oil Soap and a tooth brush to remove the grime and grit on the briar and the lava on the rim top. The finish looks very good with great looking grain around the top half of the bowl and great rustication on the rest of the bowl and shank. Jeff soaked the stem in Before & After Deoxidizer to remove the oxidation on the rubber. He scrubbed it with Soft Scrub All Purpose Cleaner to remove the majority of the oxidation. When the pipe arrived here in Vancouver for the second stop of its restoration tour I was amazed it looked so good.

I took a photo of the stamping on the underside of the shank. You can see that it is stamped as noted above. It is faint but readable.

I took the pipe apart and took a photo of the pipe. It is a good looking pipe and has some great grain around the bowl and shank. 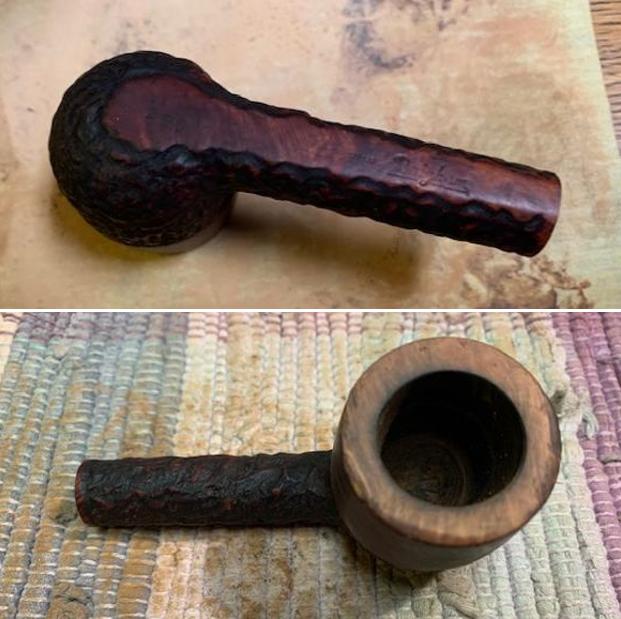 I polished the smooth portions of the bowl and the rim top with micromesh sanding pads – wet sanding it with 1500-12000 grit pads. After each pad I wiped the briar down with a damp cloth. 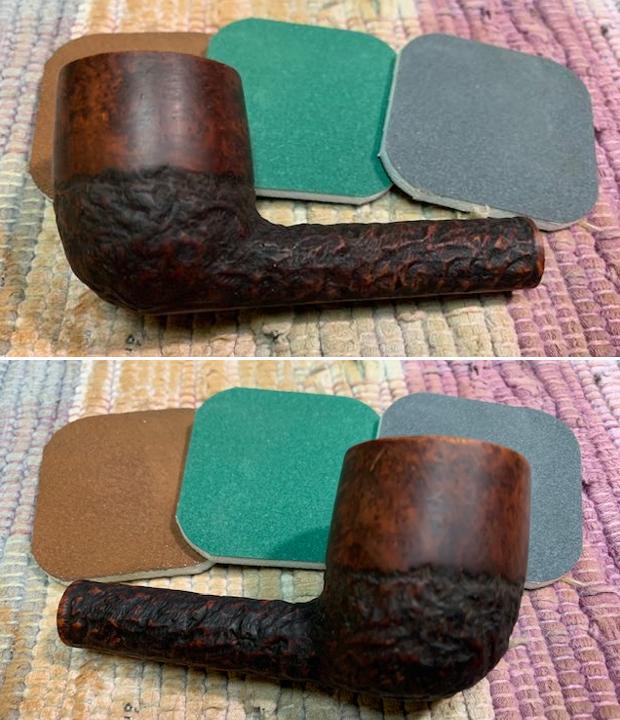 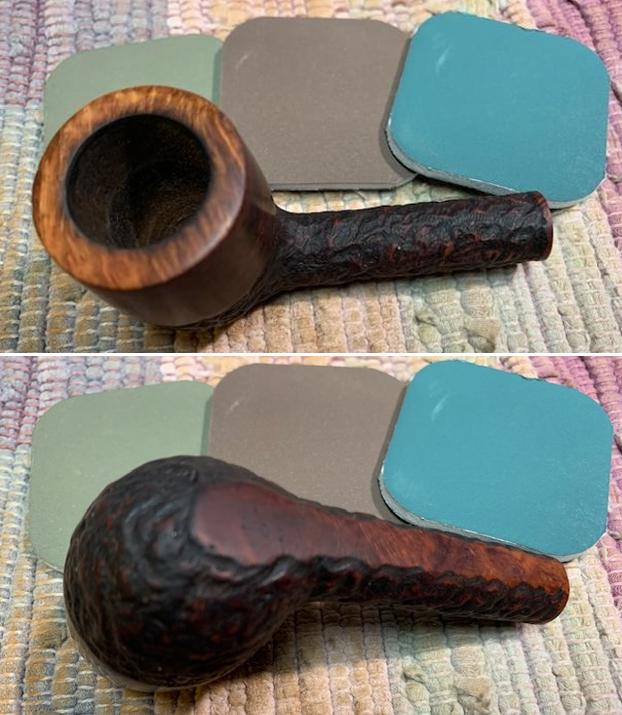 I worked some Before & After Restoration Balm into the surface of the briar with my fingertips and a horsehair shoe brush to clean, enliven and protect the briar. I let the balm sit for 15 minutes and then buffed with a cotton cloth to raise the shine. The photos show the bowl at this point in the restoration process.

With that done the bowl was finished other than the final buffing. I set it aside and turned my attention to the stem. I filled in the tooth damage with CA glue and rebuilt the button edge on the topside. Once the repairs had cured I used a file to recut the button edge and flatten out the repaired spots. 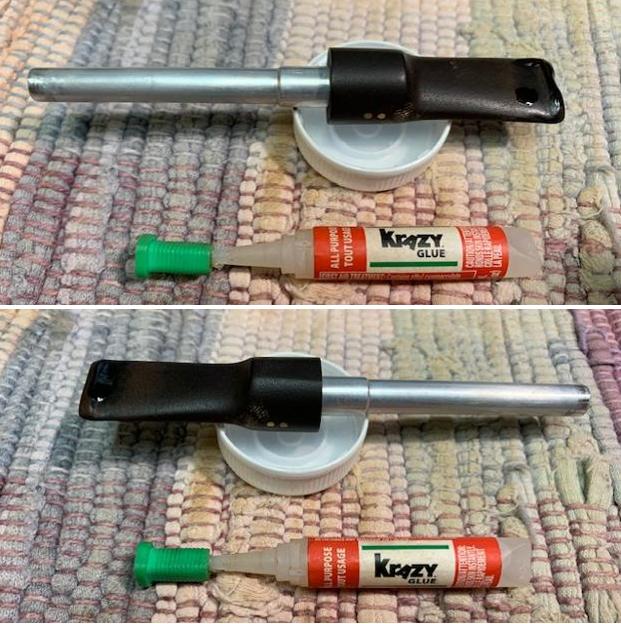 I sanded out the repaired tooth marks and chatter with 220 grit sand paper to blend them into the rest of the stem surface. I started to polish it with a folded piece of 400 wet dry sandpaper. Once it was finished it had begun to shine.

Before I finished the polishing stem I decided to fit the clean stem with a new Rock Maple Distillator. 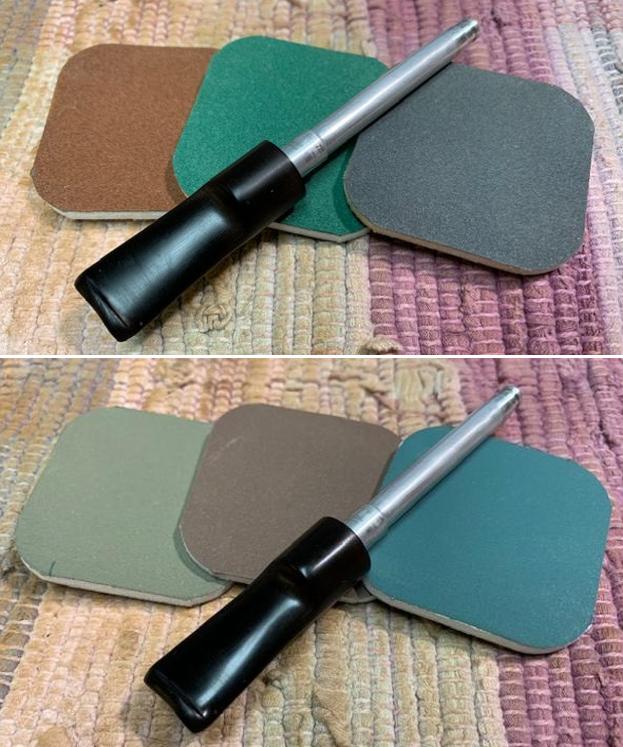 I am excited to finish this first of the Brighams that I have on the table – a nice looking Lovat, or as Brigham calls it a Club. It has a combined finish with a smooth top half of the bowl and the rest of the bowl and shank were rusticated with the normal Brigham rustication. I put the pipe back together and buffed it with Blue Diamond on the buffing wheel. I gave the bowl and the stem multiple coats of carnauba wax. I hand buffed the pipe with a clean buffing pad to raise the shine. It is fun to see what the polished bowl looks like with the grain popping through on the top half of the bowl and the rustication on the rest of the bowl and shank. Added to that the polished black vulcanite stem with two shining brass pins was beautiful. This mixed grain finish Brigham 2 Dot Lovat/Club is nice looking and the pipe feels great in my hand. It is light and well balanced. Have a look at it with the photos below. The dimensions are Length: 5 ¼ inches, Height: 1 ¾ inches, Outside diameter of the bowl: 1 ¼ inches, Chamber diameter: ¾ of an inch. The weight of the pipe is 43grams/1.52ounces. It is a beautiful pipe and one that will be on the rebornpipes store soon. If you are interested in adding it to your collection let me know. Thanks for walking through the restoration with me as I worked over this pipe. Thanks to each of you who are reading this blog. Remember we are not pipe owners; we are pipemen and women who hold our pipes in trust until they pass on into the trust of the next pipeman or woman. 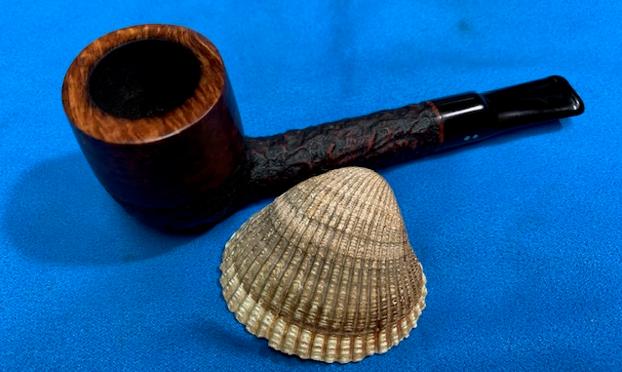 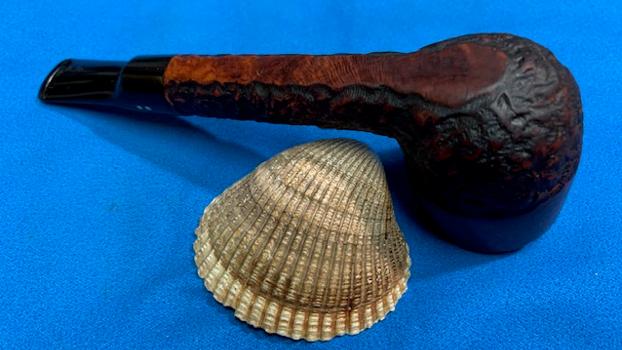