The next pipe on the work table came to us from an online auction in Nampa, Idaho, USA.  The pipe is smooth, nicely grained Pot shaped pipe with a saddle stem. The pipe is stamped on left side of the shank and reads Barling’s [arched over] Make [over] Ye Olde Wood followed by T.V.F. near the shank. On the right side of the shank it is stamped Made In England followed by EXEL. There was a lot of grime and dust ground into the smooth finish. The bowl was caked with a lava coat flowing onto the back of the rim top and the beveled inner edge of the rim. The inside and outside edges looked to be in good condition but we would know more once Jeff had cleaned it. The stem was oxidized, calcified and had tooth chatter and marks on the top and underside near the button. The stem was stamped on the topside with the Barling Cross and on the underside and read REGD 98046. The stamping was readable but damaged. It had promise but it was very dirty. Jeff took some photos of the pipe before he started his cleanup work. 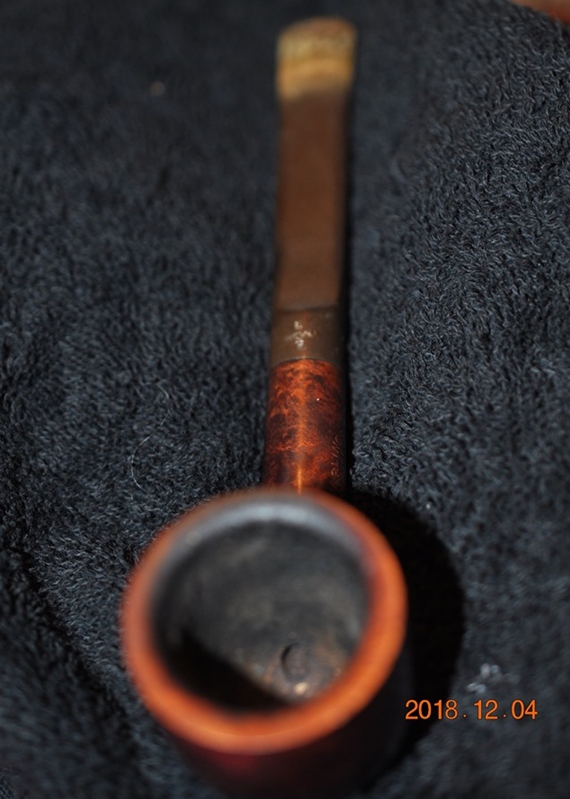 He took photos of the rim top, bowl and stem to give a clear picture of the condition of the pipe. The thickness of the cake and tobacco debris as well as the lava on the rim top and inner edge is visible. The photos of the stem show the oxidation, calcification and the chatter and tooth marks on the top and underside.

Jeff took a photo the sides and heel of the bowl to give a picture of the grain. It is quite stunning.

The stamping on the right and left side of the shank are clear and readable and read as noted above. You can also see the Barling Cross stamp on the top and the Regd number on the underside of the saddle.

I turned to Pipephil’s site (http://www.pipephil.eu/logos/en/logo-barling.html) to see if I could find a listing that had the same or similar stamping on the pipe. The stamping is the same other than the shape number. The pipe that I am working on does not have a shape number on the shank that I can find. Barling’s Arched, Make, Ye Olde Wood and on the right side Made in England and the EXEL stamp.

Pipedia gives a great history of the brand (https://pipedia.org/wiki/Barling) that is well worth reading. I looked specifically for the Patent Reg’d Stamp and found that the stamping on the stem of the one I was working on was a US Patent number for the stem.

I also worked through the different eras of the Barling pipes. I found a section on redefining the eras and quote from that section as followed:

Corporate Era 1962 – the Present: Pipes made after the family left off managing the company, beginning with the revised product grades and revised nomenclature that were introduced in the 1962 Dealers’ Catalog.

The Family Era pipes are highly sought after by collectors and have excellent smoking and aesthetic qualities. These pipes are famous for the “old wood” from which they were made. I’m including the 1962 “Barling’s Make” pipes in this category because, initially, they were made while the Family still ran the business. Montague Barling was still President, and Williamson-Barling was still General Manager.

These 1962 pipes were made by the same craftsman from the same materials, as the earlier product. Some of them are stamped with both the old and new model numbers.

… Ye Olde Wood Stamp: Sometime around 1913, the “Ye Olde Wood” stamp made its appearance on selected pipes. An example exists stamped on a 1913 date hallmarked pipe.

This logo will continue to be used in the decades to come. Initially it was used to designate a higher grade than the average, much as the “Special” grade would after the Second World War. Price lists show the “Ye Olde Wood” pipes as a separate grade from the basic BARLING’S MAKE pipe. Eventually, “Ye Olde Wood” came to represent the company to the world. The use of “YE OLD WOOD” as a stamp prior to 1940 was haphazard, at best, although the company used the slogan in advertising materials from the early teens onward. (Gage)

Size Stampings:  Up to 1926 and possibly beyond, Barling used specific, completely unrelated, model numbers to designate the various sizes of a specific shape. They produced pipes in three sizes, small, medium, and large.

In 1941 the published range of sizes expanded. Going from the smallest to the largest, they are SS, S, S-M, L, EL, EXEL, and EXEXEL. There is no “G” for giant. Giant pipes, or magnums, which are oversized standard billiards, were not stamped “G” but are commonly identified by collectors as such because they are obviously large relative to even EXEXEL pipes, and carried no size stampings (Gage).

Now I knew a bit about the pipe I was working on. Because of the Patent stamping on the stem I knew that it was made between 1936-1949. The use of the EXEL stamp also fits this time period. Now it was time to work on the pipe.

The rim top cleaned up really well. The beveled rim top and outer edge of the bowl appear to be in good condition. The stem surface looked good with some remaining oxidation and some tooth marks and chatter on both sides near the button. 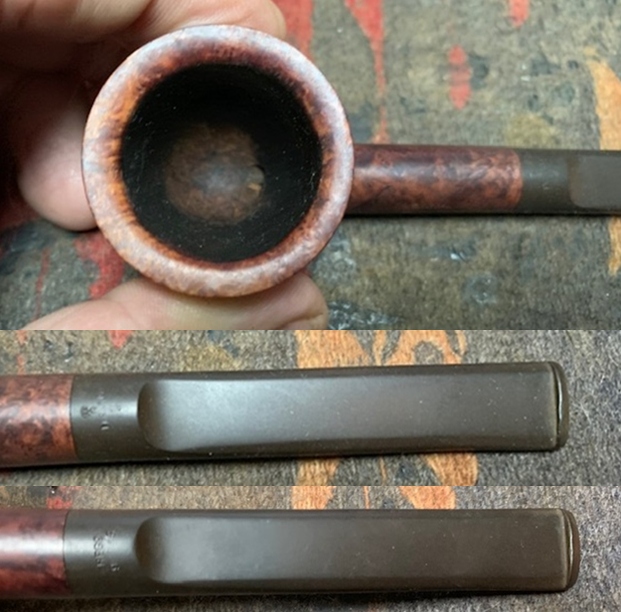 The stamping on the right and left side of the shank is clear and readable and reads as noted above. 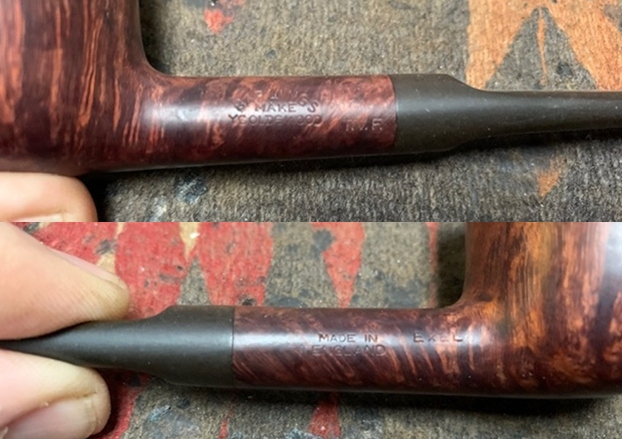 I removed the stem and took a photo of the pipe to give a sense of the whole. It would clean up and be a gorgeous pipe.

Now it was time to do my work on the pipe.  I polished the briar of the bowl and rim top with micromesh sanding pads – dry sanding with 1500-12000 grit pads. I wiped the briar down after each pad with a damp cotton pad. 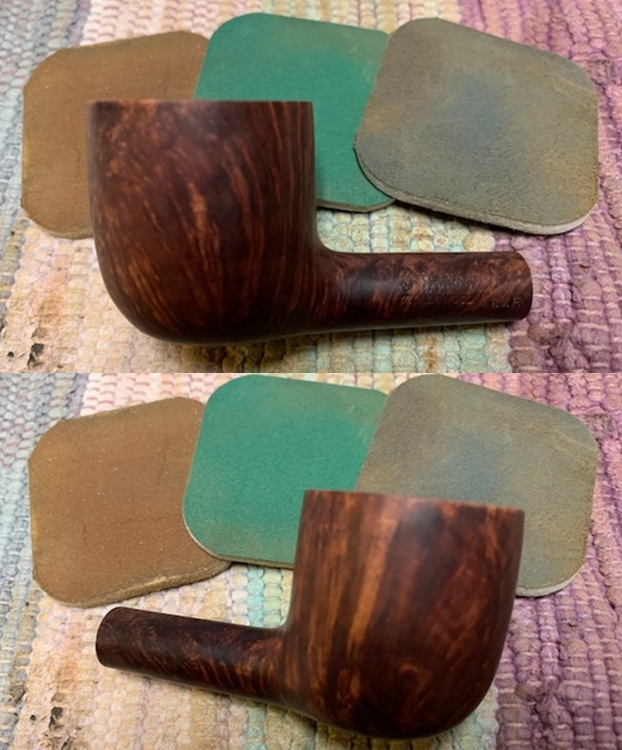 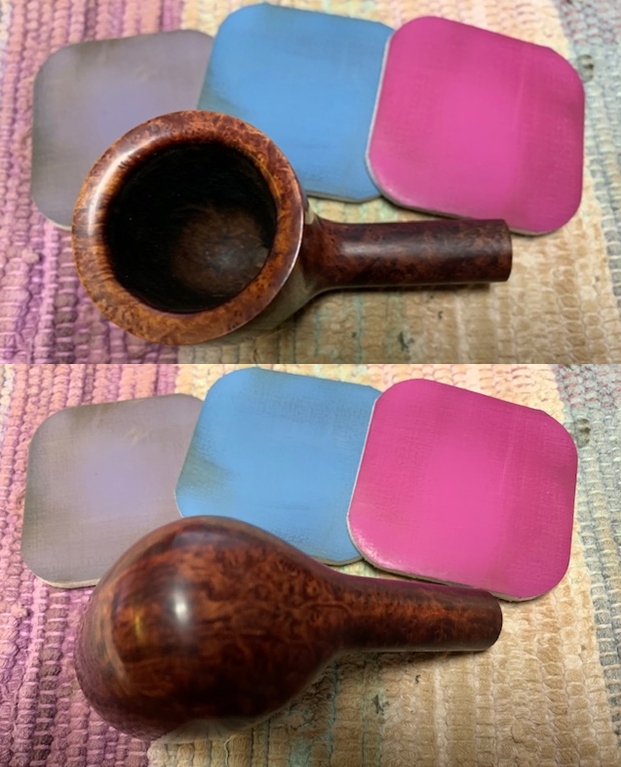 I set the bowl aside to work on the stem. I put the stem in the Pipe Stem Oxidation Remover from Briarville USA. I am still experimenting with the product to remove the oxidation that remained on the stem. I let it soak for 1 hour and took it out of the bath and wiped it down with a paper towel. I scrubbed off the light remnants with Soft Scrub on a cotton pad. The photos show the stem at this point. 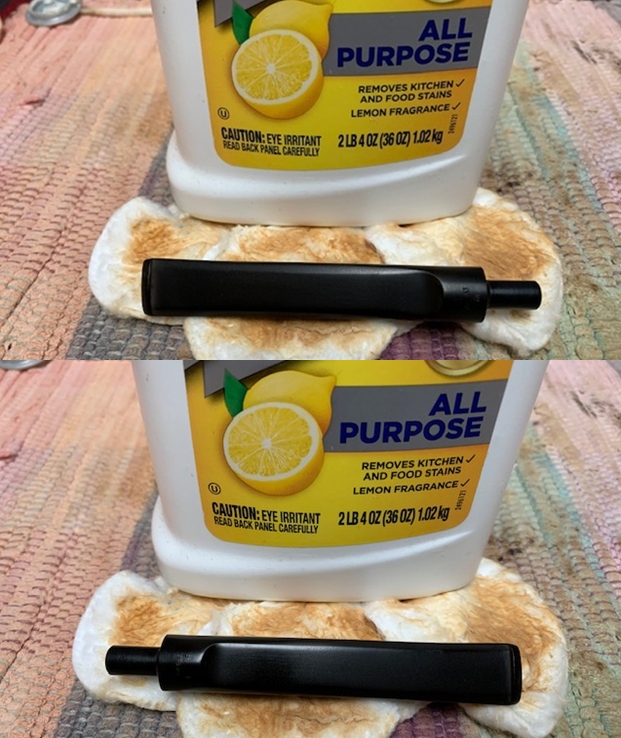 I used some Rub’n Buff Antique gold to touch up the stamps because they were so faint that the white filler that I usually used would not even show on the stem. 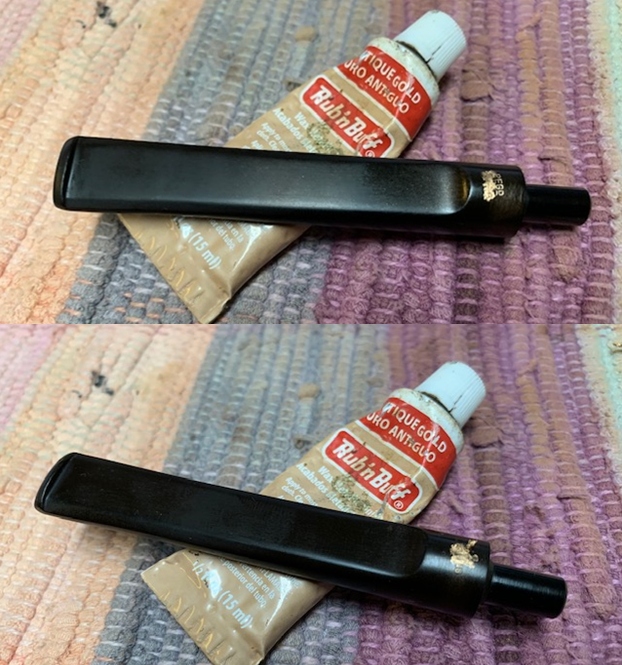 The stem was in good condition and the tooth marks were light so I figured they would polish out fairly easily. I polished the vulcanite stem with micromesh sanding pads – 1500-12000 grit pads. I wiped it down with Obsidian Oil after each sanding pad. I used Before & After Pipe Polish – both Fine and Extra Fine to further polish the stem. 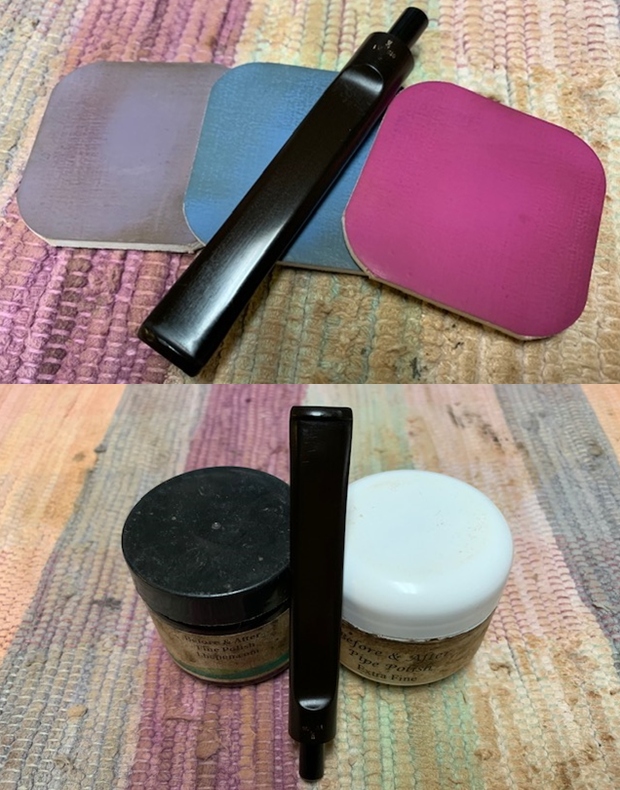 This Barling’s Make Ye Olde Wood T.V.F. EXEL Pot is a great looking pipe now that it has been restored. The rich, brown stained finish around the bowl is quite beautiful and highlights the gorgeous straight and flame grain. The finish works well with the polished vulcanite patented saddle stem. I put the stem back on the bowl and carefully buffed the pipe with Blue Diamond on the buffing wheel using a light touch on the briar. I gave the bowl and the stem multiple coats of carnauba wax on the buffing wheel and followed that by buffing the entire pipe with a clean buffing pad. I hand buffed the pipe with a microfiber cloth to deepen the shine. The finished Barling’s Make Ye Olde Wood Pot sits nicely in the hand and feels great. Give the finished pipe a look in the photos below. The dimensions of the pipe are Length: 6 inches, Height: 1 ½ inches, Outside diameter of the bowl: 1 ½ inches, Chamber diameter: 1 inch. I will be putting it on the rebornpipes store shortly. If you are interested in adding this pipe to your collection send me a message or an email. Thanks for reading this blog and my reflections on the pipe while I worked on it. There are many more to come! 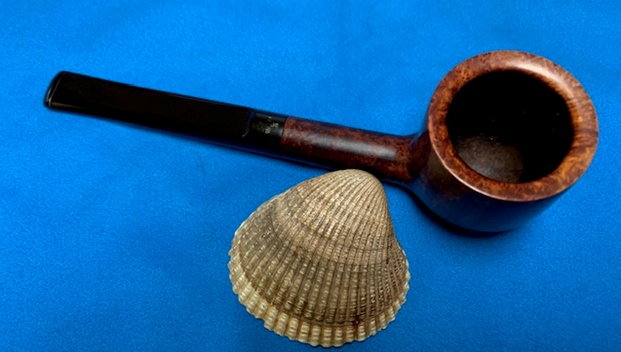 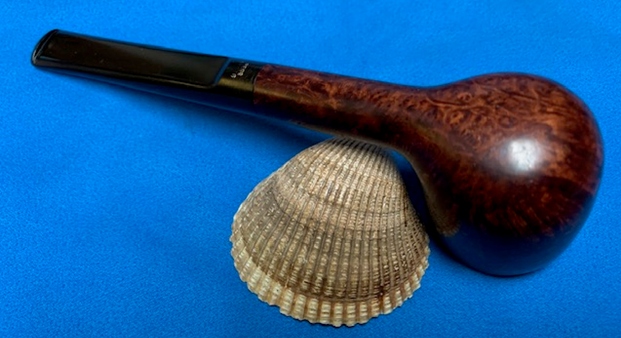 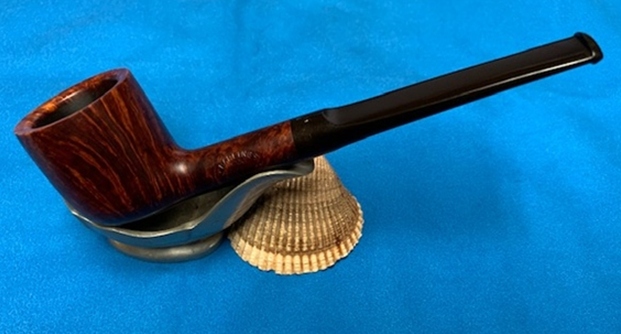