In the last box of pipes Jeff sent me there were three pipes that I left to the end to give my attention too. These were all Comoy’s pipes. The first is the one on the table now – a Comoy’s Blue Riband Prince 228C with stunning grain. The second and third were both Comoy’s Specimen Straight Grain Dublins – the second was a 35 and the third was a little larger, a 36. All of these pipes were drop dead gorgeous.  I have them all on the desk top now looking them over and I am quite honestly stunned by their beauty.

The next of those stunning pipe I chose to work on is the pipe in the center of the two photos above. It is 35 Specimen Straight Grain. Comoy’s Specimen Straight Grain pipes are really a special grade of pipe. This is another beautiful piece of pipe maker craftsmanship and in my mind have Comoy’s has never been surpassed. It is stamped on the left side of the shank Comoy’s Specimen Straight Grain and on the right side it bears the 35 shape number near the bowl shank junction and the circular COM stamp that reads Made In London in a circle over England. The “In” is in the centre of the circle. Jeff took some photos of the pipe before he started his cleanup work. 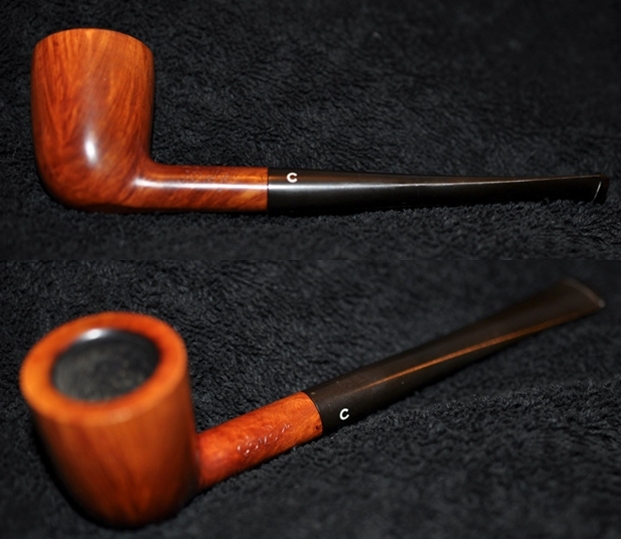 He took photos of the bowl and rim top to show their general condition. You can see the tars on the inner edge of the beveled top and a small nick in the outer rim on the right side toward the back. The cake in the bowl is quite thick and there is tobacco debris on the walls of the bowl. The finish on the bowl is dull but still very stunning. 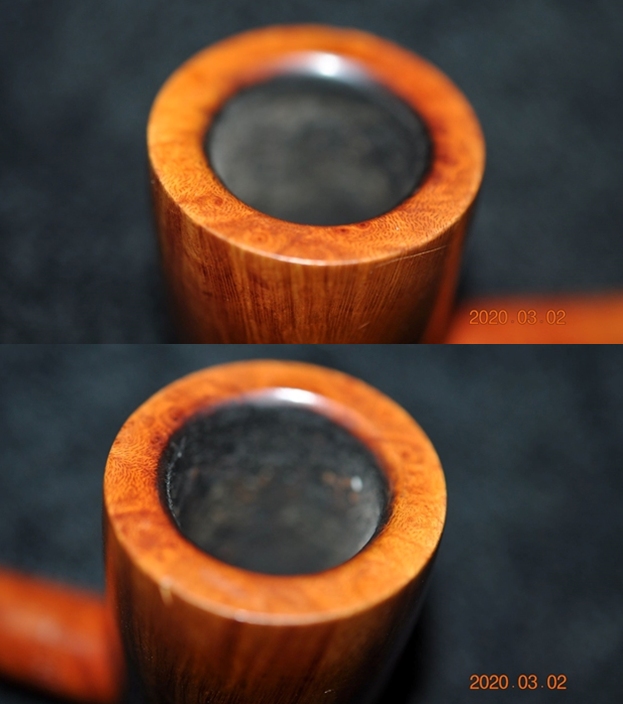 Jeff took some photos of the sides and heel of the bowl to give an idea of the grain on this particular piece of briar. It is amazing and I cannot wait to see what it looks like once it is polished and waxed. 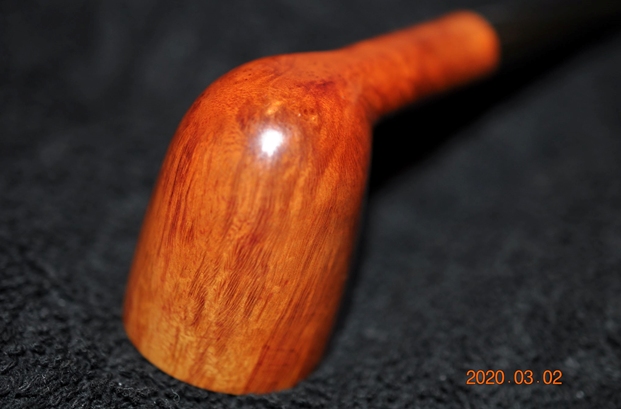 This pipe also has a slender stem but it is straight and has a great fishtail blade. Once again the surface of the top and underside of the stem is oxidized and dirty but it is quite free of tooth marks and only has a minimum of chatter. 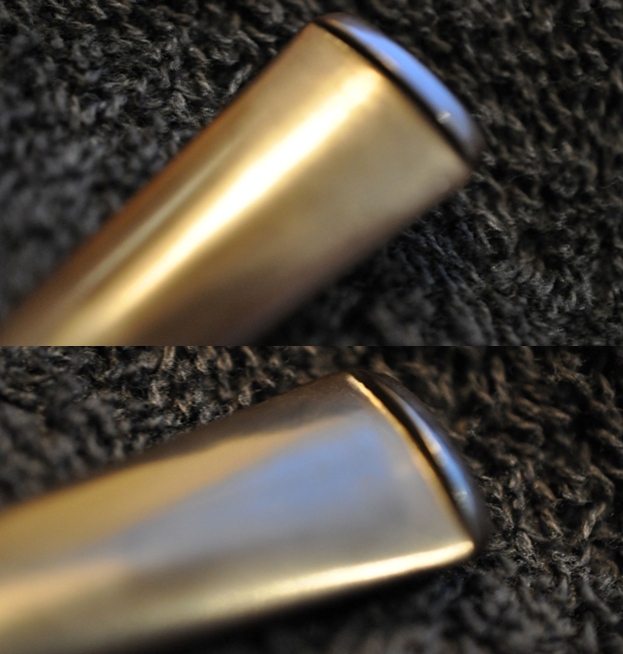 I turned to Pipephil’s site to get a quick overview of the Comoy’s Specimen Straight Grain line (http://www.pipephil.eu/logos/en/logo-comoy.html). I have included a screen capture of the pertinent section from the site. The summary to the right of the photos is always succinct and quite pointed. In this case it quotes the Comoy’s 1965 catalogue in saying the Specimen Straight Grain grade: “The rarest and finest of all Comoy pipes.”

I turned to Pipedia and reread the history of the Comoy’s brand and focused on the Specimen Straight Grain. Here is the link to the article by the late Derek Green. It is worth a read. (https://pipedia.org/wiki/A_History_Of_Comoy%27s_and_A_Guide_Toward_Dating_the_Pipes). I quote from that article below:

Specimen Straight Grain. I am not sure when this grade was first produced, but it probably appeared just before the Second World War. This certainly was the top grade from its introduction. It is described in my 1965 catalogue as “The rarest and finest of all Comoy pipes. It is so unusual to find a completely perfect straight grain that shapes and quantities are strictly limited.” It was priced at $50 in 1943 and 1965. Jacques Cole recalls that, in the 1950s, there was a very large bent that was reckoned to be about the “perfect” Straight Grain. It was not for sale but used as an exhibition piece and valued then at £500.

I moved forward to work on the pipe itself and see what I had to do with it. It had come back looking amazingly clean. Even the stem looked like new, with most of the tooth chatter gone. I was impressed. Jeff had done his normal thorough clean up – reaming, scrubbing, soaking and the result was evident in the pipe when I unpacked it. I took photos of the pipe before I started my work on it. Just look at the grain on this delicate pipe. Stunning! 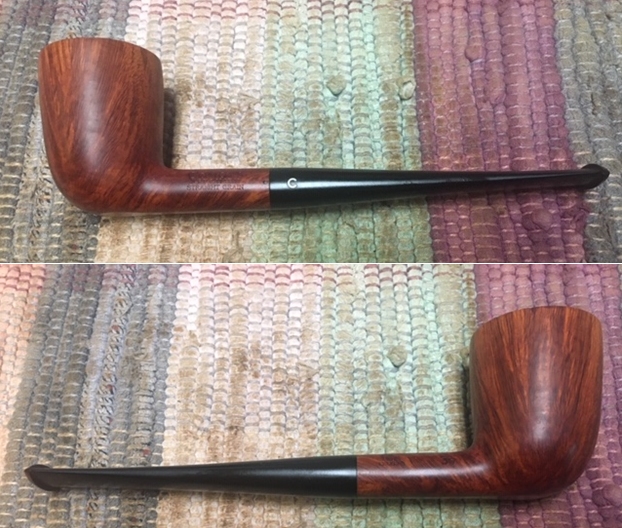 I took some photos of the rim top and stem. The rim top and bowl looked very good. The cake and lava overflow were gone and the inward beveled rim was very clean. Jeff had been able to get rid of the darkening, lava and tars and left behind a smooth rim top. Even the slight nick on the outside right edge of the rim top looked better. The close up photos of the stem shows that it is a much cleaner and better looking stem. The light tooth chatter was gone and the stem looked really good.

I took photos of the stamping on the shank sides to show the condition after the cleanup. Often the stamping takes a hit with the cleaning and is lessened in it clarity. Jeff does a great job in leaving the stamping looking very good.

I removed the stem from the shank and took a photo of the pipe at this point. Like other Comoy’s I have worked on this stem had a metal tube in the tenon to strengthen it in what is often a weak point on a pipe. 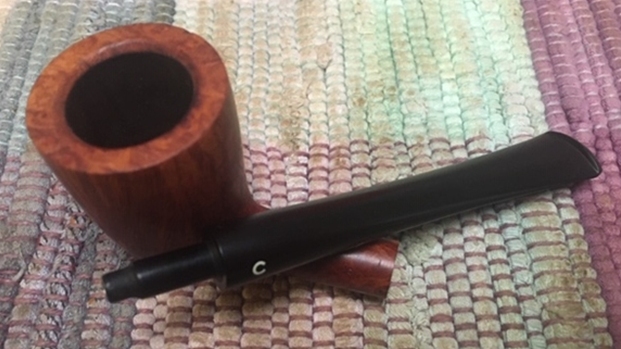 Since the pipe was also in such great condition at this point I started my polishing regimen. I used nine worn micromesh sanding pads and dry sanded the bowl with 1500-12000 grit pads. I wiped the bowl down with a damp cloth after each pad. The bowl really shines by the final three pads. 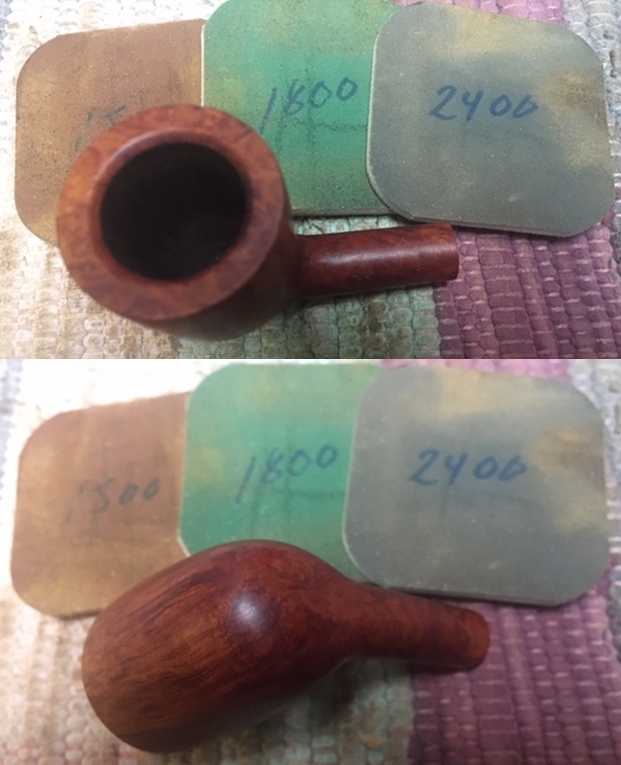 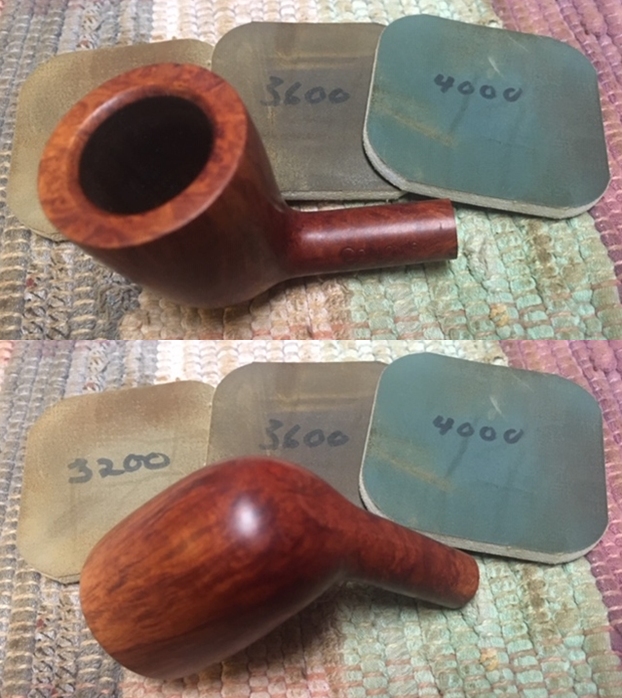 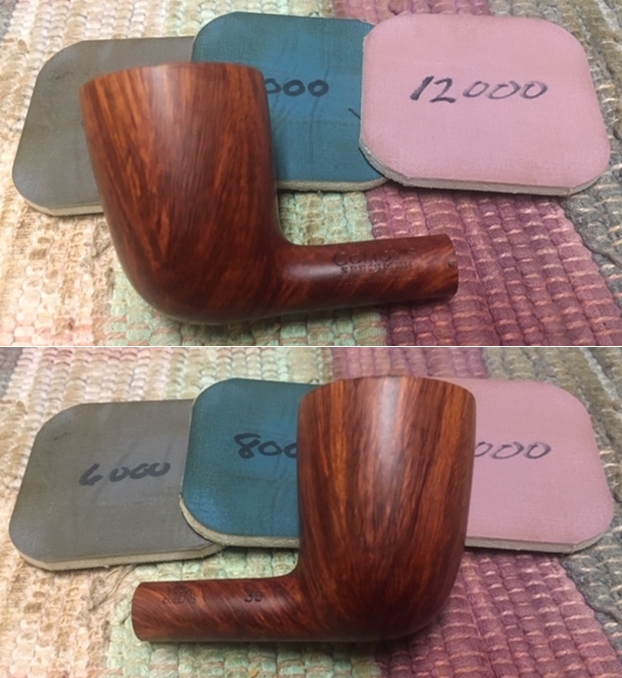 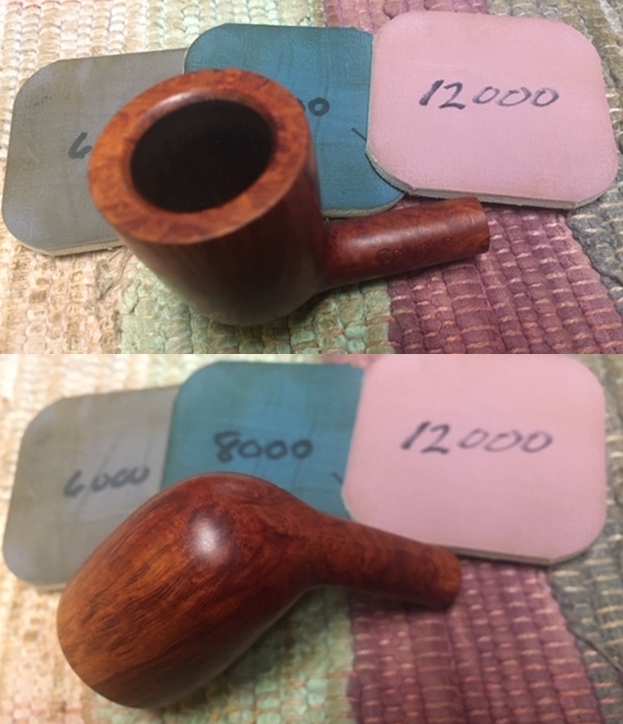 I worked some Before & After Restoration Balm into the surface of the briar with my fingertips to clean, enliven and protect it. I let the balm sit for a little while and then buffed with a cotton cloth to raise the shine. The photos show the bowl at this point in the restoration process.

Because the stem was in such great condition I moved direct to polishing it with micromesh sanding pads – dry sanding with 1500-12000 grit sanding pads. I wiped it down after each sanding pad with a cloth containing some Obsidian Oil. I finished polishing it with Before & After Pipe Stem Polish – both Fine and Extra Fine and buffed it off with a cotton cloth. I gave it a coat of Briarville’s No Oxy Oil to preserve and protect the stem. 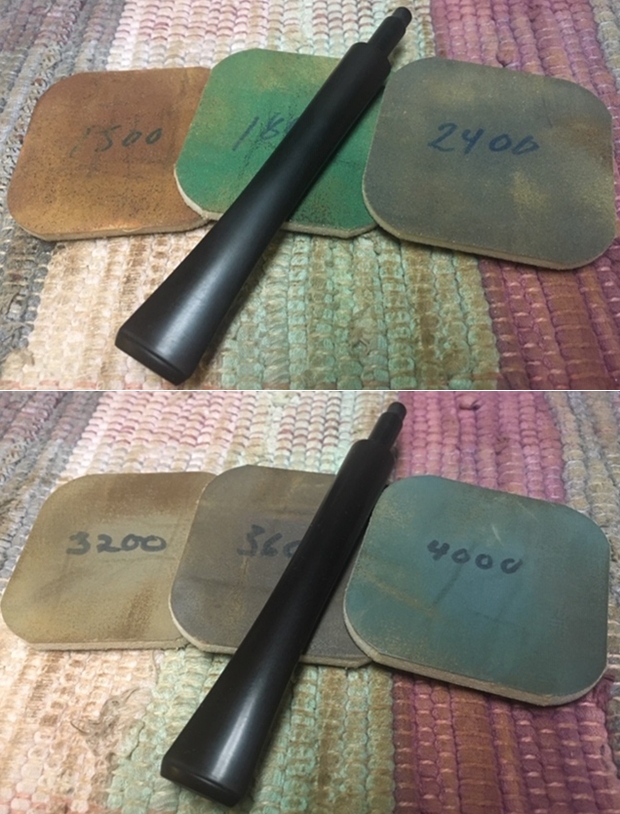 I don’t know how many times I have said this but I love it when I come to the end of a restoration and all of the parts come together and the pipe looks better than when we started the cleanup process. I put the stem back on the bowl and buffed the pipe with Blue Diamond on the buffing wheel. I carefully avoided the stamping on the shank sides during the process. I gave the bowl and stem multiple coats of carnauba wax on the buffing wheel and followed that by buffing it with a clean buffing pad on the buffer. I hand buffed the pipe with a microfiber cloth to deepen the shine. The finished pipe is a real stunning example of Comoy’s Dublin shape. Once again the grain and the way the shape follows the grain is amazing. Give the finish pipe a look in the photos below. I can only tell you that it is much prettier in person than the photos capture. The dimensions of the pipe are Length: 5 ½ inches, Height: 1 ¾ inches, Outside diameter of the bowl: 1 ¼ inches, Chamber diameter: ¾ of an inch. This English made Comoy’s Specimen Straight Grain Dublin 35 pipe is another unique piece of pipe history. Thanks for walking through the restoration with me as I worked over another beautiful pipe. This one will be staying in my collection for now while I think about what to do with it. Thanks for your time. 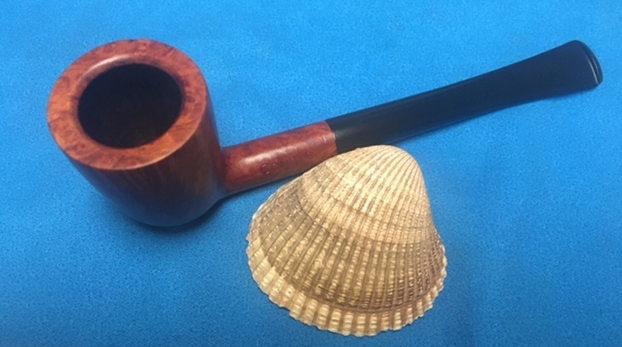 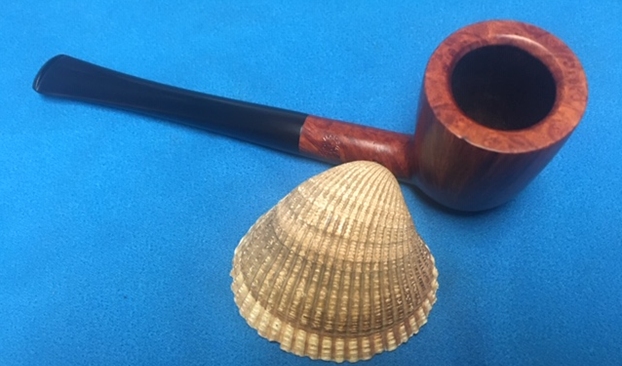 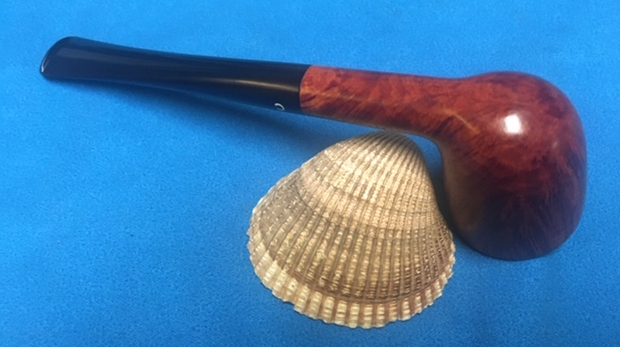 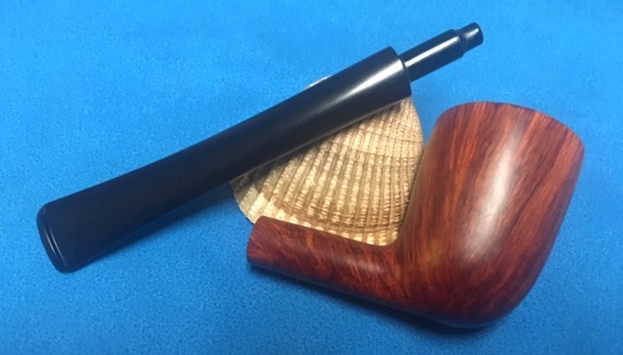 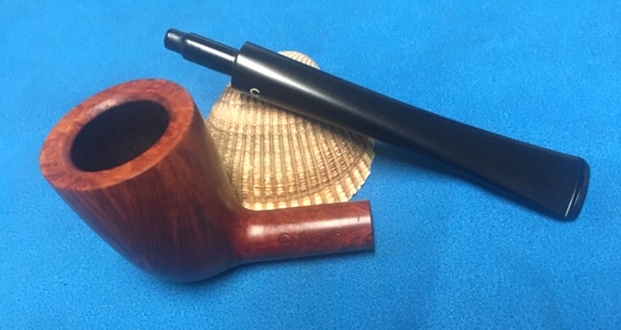 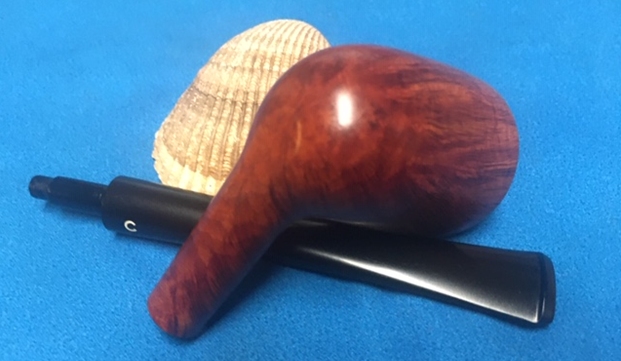 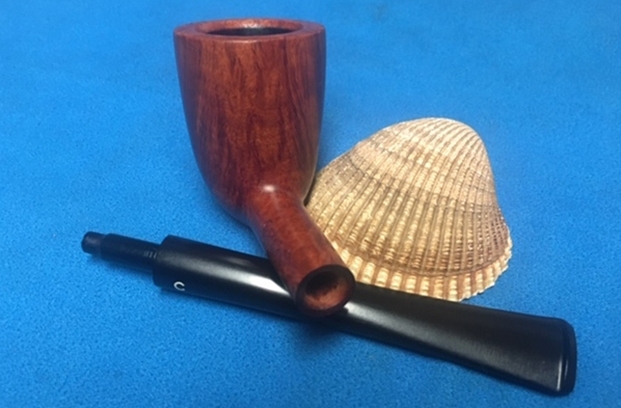