It turns out he said he had 17 pipes. That was certainly more than I expected but I communicated that there was a large queue ahead of him and I would have to fit them in as I could. He was fine with whatever time it took. He sent me the following photos of his collection that he wanted restored. The first photo shows his eleven Brigham pipes – all very interesting shapes. The second photo shows the six various pipes in the collection – A Republic Era Peterson’s System 1312 (Canadian Import), A Bjarne Hand Carved Freehand, a Comoy’s Everyman London smooth billiard, a GBD Popular Dublin 12, an English made Kaywoodie Rustica 72B, a Kriswill Bernadotte 60 with a broken tenon. When the box arrived there were two additional pipes included for a total of 19 – a Ropp 803 Deluxe Cherrywood Poker and a Comoy’s Sandblast Everyman Canadian 296. It was a lot of pipes! 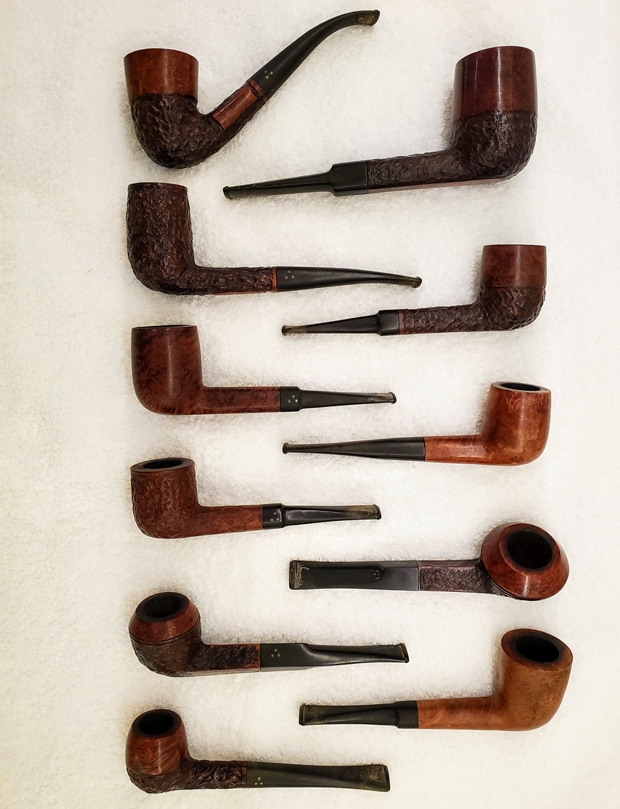 I decided to start with the first pipe I pulled out of his box – when I unwrapped it the pipe was the Ropp Cherrywood. It was stamped on the heel and read ROPP in an oval over DeLuxe over France with a shape number 803. It was dirty. The exterior of the octagonal pipe was dirty with grime and dust. The rim top had some lava overflow and darkening on the smooth bevel. The bowl had a thick cake that was crumbling. The bark on the shank and bowl was in excellent condition. The end of the threaded portion of the shank that screwed into the bowl had a metal insert as did the area around the side of the bowl where the shank screwed in. The stem had an inlaid Ropp emblem on the left side of the taper stem. It was a push stem and was stuck in the Cherrywood shank. It was oxidized and had tooth chatter and marks on both sides just ahead of the button.

I took a photo of the stamping on the heel of the bowl to show what I was speaking about above. It is very clear and readable. The 803 is clearly the shape number for the octoganal Cherrywood. 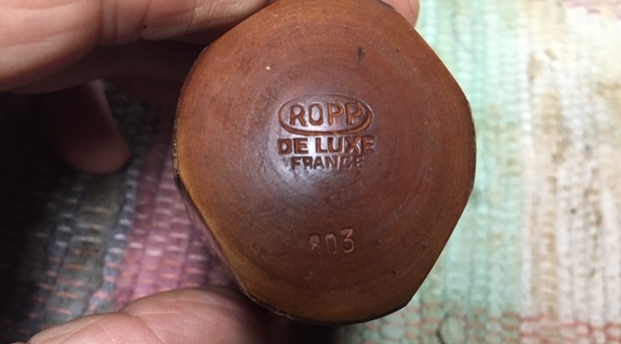 I carefully took the pipe apart. The shank and stem unscrewed as a single unit from the bowl. I checked the fit of the stem in the shank and from my memory of other Ropp pipes I was pretty certain it was a push stem. I held the shank firmly as close to the shank end as possible to prevent inadvertently cracking it when I twisted the stem. I carefully applied pressure to the stem and sure enough it came loose. There was some bits of wood stuck on the tenon but otherwise everything looked good both inside the mortise and on the tenon.

I wanted to refresh my memory on the brand so I turned for a short, quick summary to Pipephil (http://www.pipephil.eu/logos/en/logo-ropp.html). I have included the pertinent information from that site below:

I also turned to Pipedia to see if there was any additional information that would be helpful (https://pipedia.org/wiki/Ropp). I quote the portion of the article on the Cherrywood pipes.

Eugène-Léon Ropp (1830 – 1907) had acquired a patent for a cherrywood pipe (wild cherry, lat.: Prunus avium) in 1869. In 1870 he established a workshop to manufacture such pipes in Büssingen (Bussang, Vosges mountains). Around 1893 the business moved into the former mill of Sicard (part of the community of Baume-les-Dames – Département Doubs, Upper Burgundy – from 1895 on)… Even though cherrywood pipes were the mainstay of Ropp until the company finally closed down in September 1991. The company was taken over by Cuty-Fort Entreprises (Chacom, Jeantet, Vuillard, Jean Lacroix…) in 1994.

The pipe thus was made in France sometime prior to the closure in 1991. It is made from wild cherry and was a specialty of Ropp. I have worked on quite a few over the years but I had forgotten all the dates and information. Now it was time to work on the pipe.

I reamed the bowl with a Savinelli Fitsall Pipe Knife, scraping the cake back to bare wood so that I could check on the integrity of the bowl walls. After scraping the cake out of the bow I used the edge to also scrape off the inner beveled edge of the rim top. I sanded the bowl walls with 220 grit sandpaper on a piece of dowel to smooth them out and further examine them. I was happy that the walls looked very good. I cleaned up the rim edge further with a folded piece of 220 grit sandpaper. 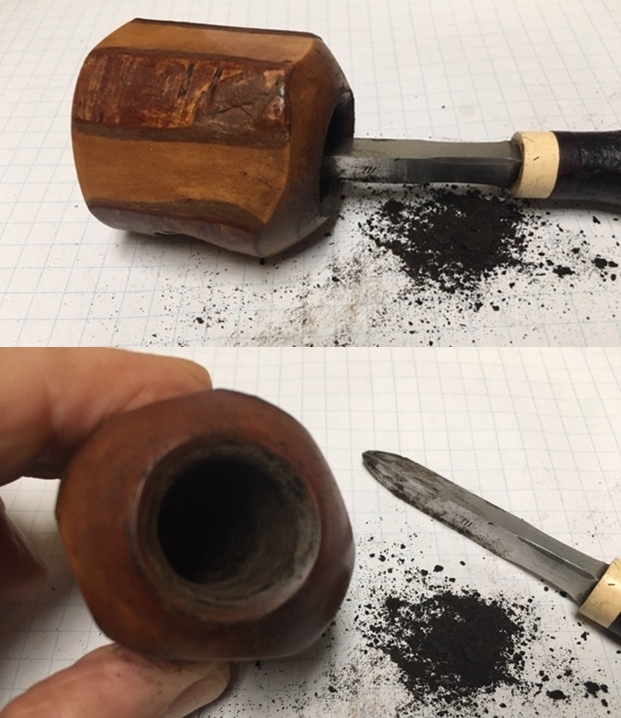 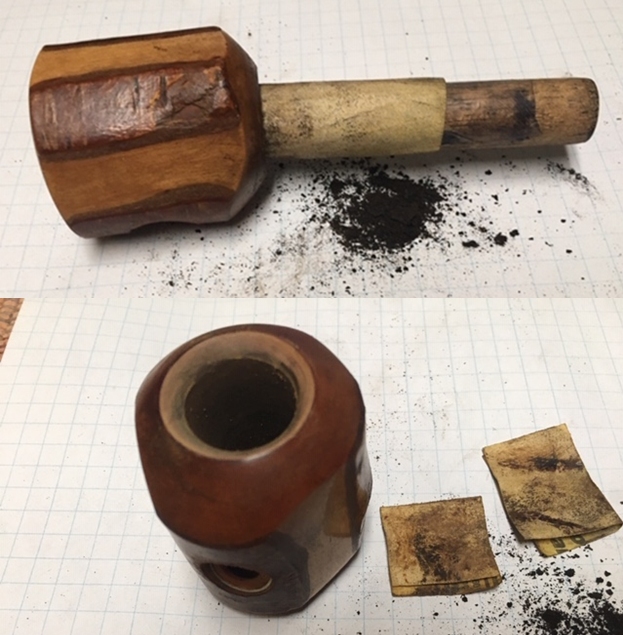 I cleaned out the threaded mortise area on the bowl and the interior of the shank and stem with pipe cleaners, cotton swabs and alcohol.

With the bowl and shank cleaned it was time to put those parts back together. I have learned that the threaded tenons on the Cherrywood work better when lubricated with some Vaseline Petroleum Jelly. It makes it easy to turn them together without damaging or cracking the shank or bowl. 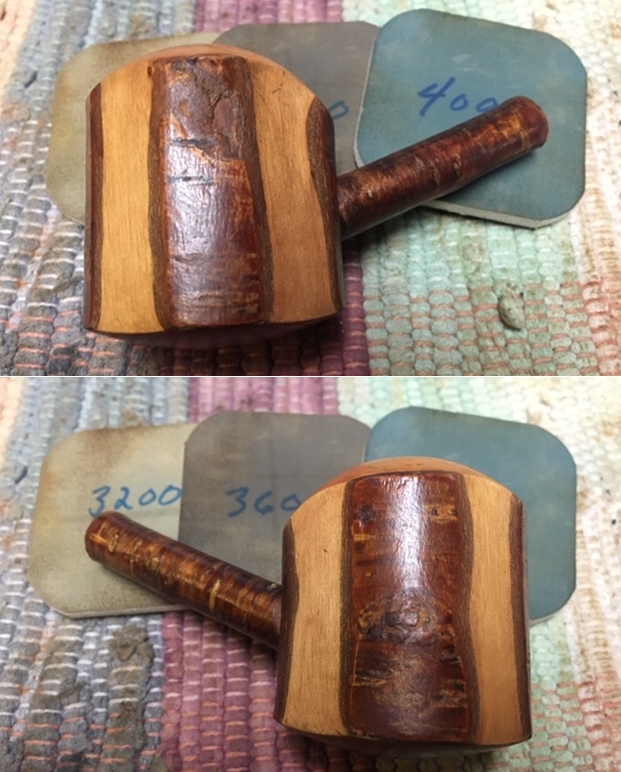 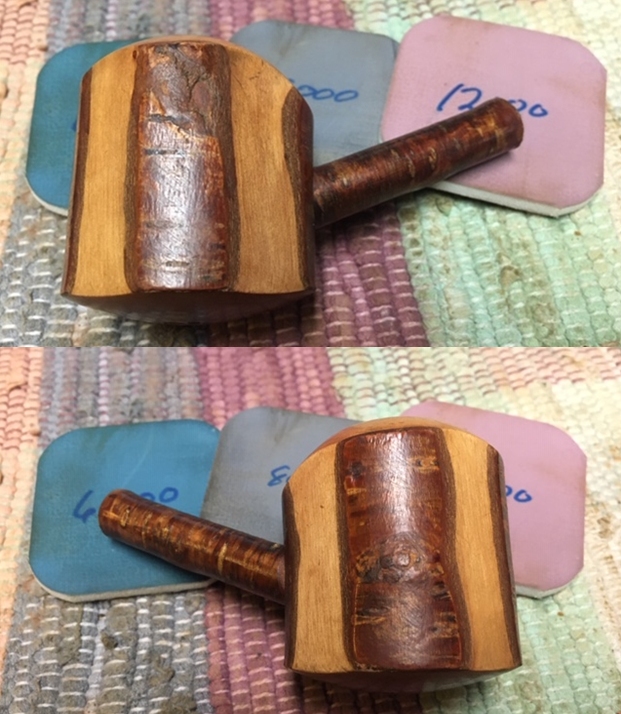 I rubbed the Cherrywood bowl and shank down with Before & After Restoration Balm. I worked it into the surface of the gourd with my fingertips to clean, enliven and protect it. I let the balm sit for a little while and then buffed with a cotton cloth to raise the shine. Mark Hoover’s Balm is a product that I have come to appreciate and one I use on every pipe I have been working on. 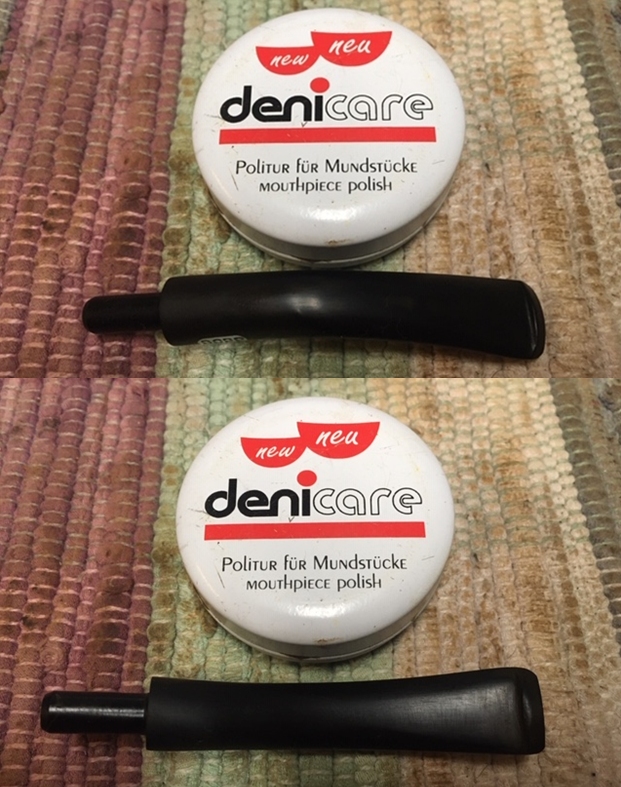 I polished the stem with micromesh sanding pads – wet sanding it with 1500-12000 grit pads. I polished it further with Before & After Pipe Stem Polish – both fine and extra fine. I finished by wiping it down with Briarville’s No Oxy Oil and buffing it to a shine. 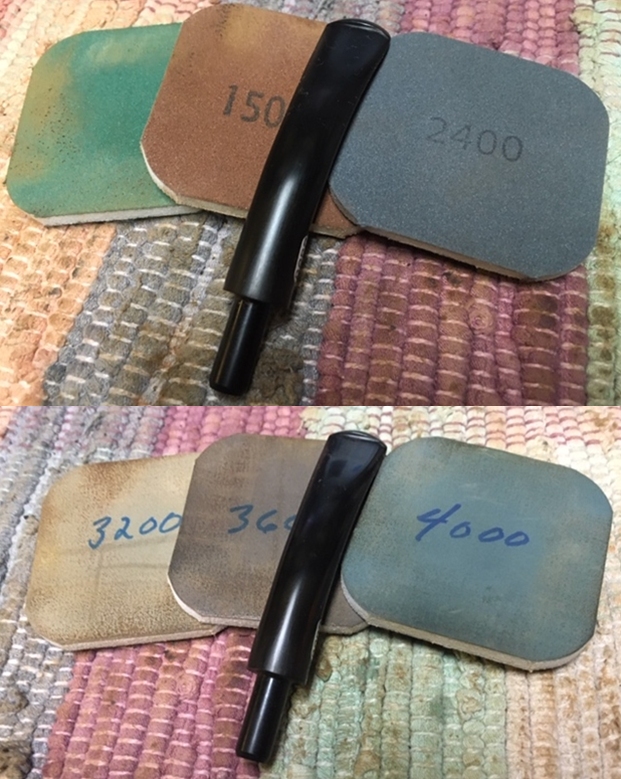 I always look forward to this part of the restoration when all the pieces are put back together. I put the pipe back together and buffed the stem with Blue Diamond on the buffing wheel. I gave the bowl multiple coats of Conservators Wax and the stem multiple coats of carnauba wax. I hand buffed the pipe with a clean buffing pad to raise the shine. It is fun to see what the polished bowl looks like with the smooth Cherrywood set off by the strips of bark contrasting well and finally the black vulcanite stem almost glowing. This Ropp Cherrywood is nice looking and feels great in my hand. It is one that could be clenched and smoked while doing other things as it is very light weight and well balanced. It must have been a fine smoking pipe judging from the condition it was when I received it. Have a look at it with the photos below. The dimensions are Length: 6 inches, Height: 2 inches, Outside diameter of the bowl: 1 ½ inches, Chamber diameter: ¾ of an inch. This is the first of the pipes sent to me from Eastern Canada for restoration. I am looking forward to what the pipeman who sent it thinks of this first restoration. Lots more to do in this lot! Thanks to each of you who are reading this blog. Remember we are not pipe owners; we are pipemen and women who hold our pipes in trust until they pass on into the trust of the next pipeman or woman. 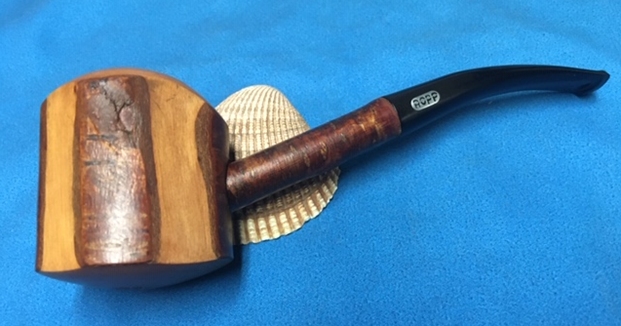 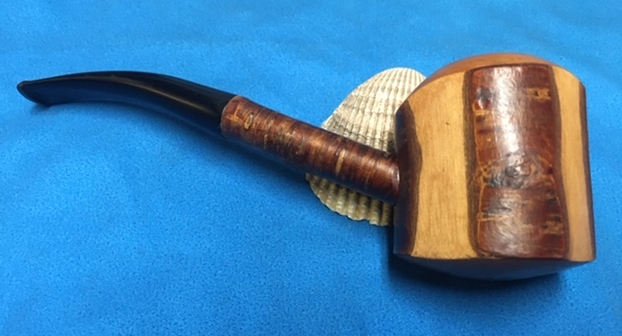 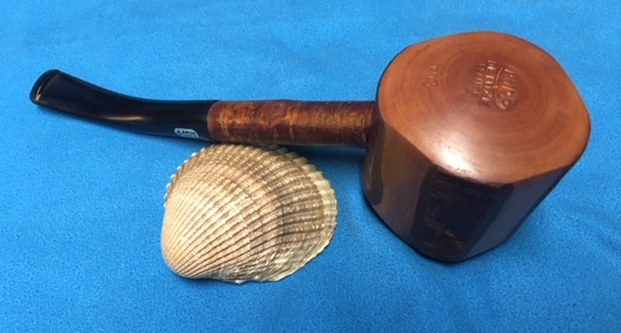 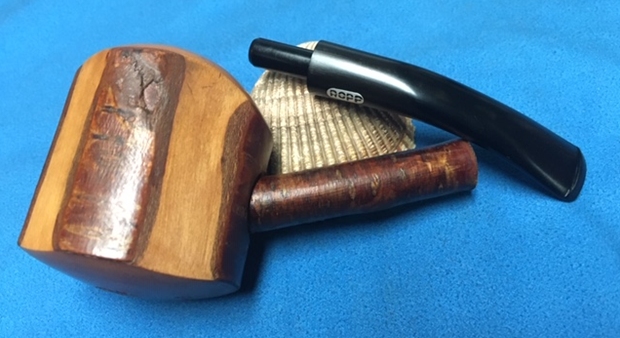 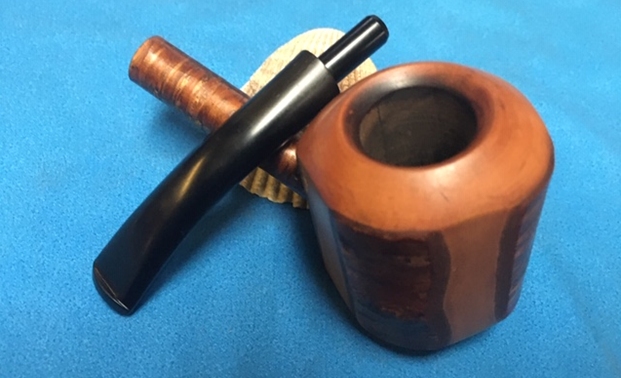 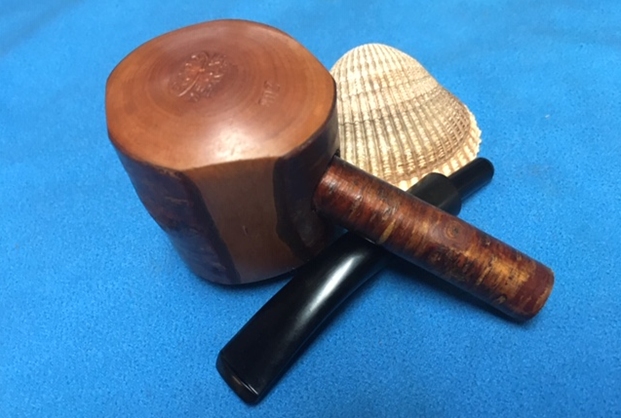 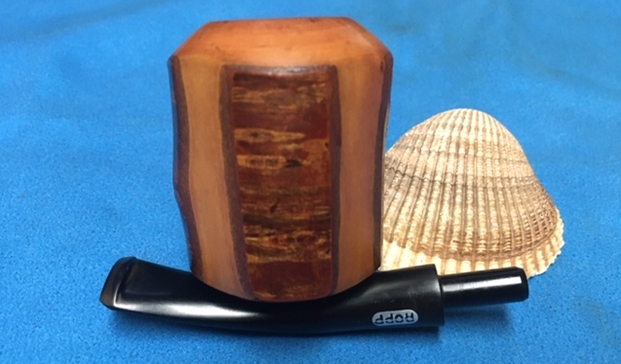