The next pipe on the work table was a beautifully grained Freehand. The bowl and shank had a smooth finish with mixed grain. The top of the bowl and the end of the shank was plateau. The shape of the bowl top was oval. The walls of the bowl are scooped on the sides and front of the bowl. Toward the back of each side there is a ridge running from the top to the bottom of the bowl. The bottom of the bowl is shaped almost like a spade. The shank is quite thick and the underside is stamped toward the shank end. It reads Karl Erik over Hand Made in Denmark over 5 over A. The bowl had a dull and dirty finish. There was a thin cake in the bowl and lava overflow and grime in the plateau on both the top and the end of the shank. The stem was oxidized but the Karl Erik KE logo was in perfect condition on top. There was tooth chatter on the top side and some deep tooth marks and chatter on the underside. I took photos of the pipe before I cleaned it up.

I took a close up photo of the bowl and rim to show the condition of the pipe before I started to work on it. The plateau rim top was dirty and cake with lava overflow. The bowl had a thin cake but looked to be solid. The finish of the bowl was dull and looked tired. The second photo shows both the plateau top and the shank end.

I reread the blog that Robert M. Boughton did for us on his “Grade O” Karl Erik to refresh my memory on the brand and the grading system (https://rebornpipes.com/2018/07/28/a-three-card-draw-for-an-inside-straight-with-an-old-karl-erik-hand-made-grade-o-freehand/). It was enlightening and from there I went on and looked up the brand on both Pipephil’s site and Pipedia to add some details to my knowledge. 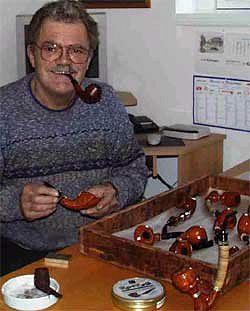 From the Pipephil site I got a quick overview of the history of the brand. I quote: Brand created in 1965-66 by Karl Erik Ottendahl (1942 – 2004 †). In the best years he employed up to 15 craftsmen among which Bent Nielsen (see Benner) and Peder Christian Jeppesen. Former grading (ascending): from 4 to 1, and “Ekstravagant” (entirely handmade).  http://www.pipephil.eu/logos/en/logo-k1.html

From Pipedia here is a bit more detailed history of the brand.

Karl Erik Ottendahl (1942 – 2004) was born in Aalborg (Jutland), just a few miles from the very northernmost tip of Denmark. He began smoking a pipe when he was 14 and upon leaving school he started an apprenticeship…as a lithographer at the age of 16.

While working as an apprentice he began hand carving pipes as a hobby. Many were given as gifts to his more senior colleagues. Upon completion of his apprenticeship he moved to Nairobi, Kenya to work as a lithographer during the 1962 war. While in that war torn country, he was unable to procure pipes for himself. In the face of such a predicament, he chose to continue to make pipes for his own use rather than go without.

Returning to Denmark after three years he couldn’t find a well paid… job, and so he began making a few pipes on the side to boost his income choosing his prenames “Karl Erik” – logo “KE” – for his label. When he managed to find some major Copenhagen pipe stores willing to sell his pieces his reputation grew little by little and he was finally able to purchase more and better machinery and began working full time as a pipe maker. https://pipedia.org/wiki/Karl_Erik

Pipedia also included a short description of the grading system that was used. From what I can discern the numbers ascended (6-1) and the letters ascended as well.

KE’s new grading used numbers ascending from D to A. The unique “Ekstravagant” pipes C, B, A, AA to AAA. These superb pieces of remarkable quality were, almost certainly, the least expensive high- quality hand made pipes coming from Denmark today! https://pipedia.org/wiki/Karl_Erik

I used a brass bristle brush to clean up the plateau on the rim top and shank end. I scrubbed it dry to remove the buildup of grime and tars on both surface. The bristles are hard enough to remove the grime and soft enough not to scratch the surface. It is a tool I always have close at hand when working on Freehand pipes.

Once the buildup was gone from the top and shank end I scrubbed the entire exterior with a tooth brush and Murphy’s Oil Soap to remove the dirt on the surface of the briar and the remaining dust in the plateau. I rinsed it under running water to remove the soap and debris from the pipe. I dried it off with paper towels and twisted the paper towels into the bowl to remove the light cake that was there. 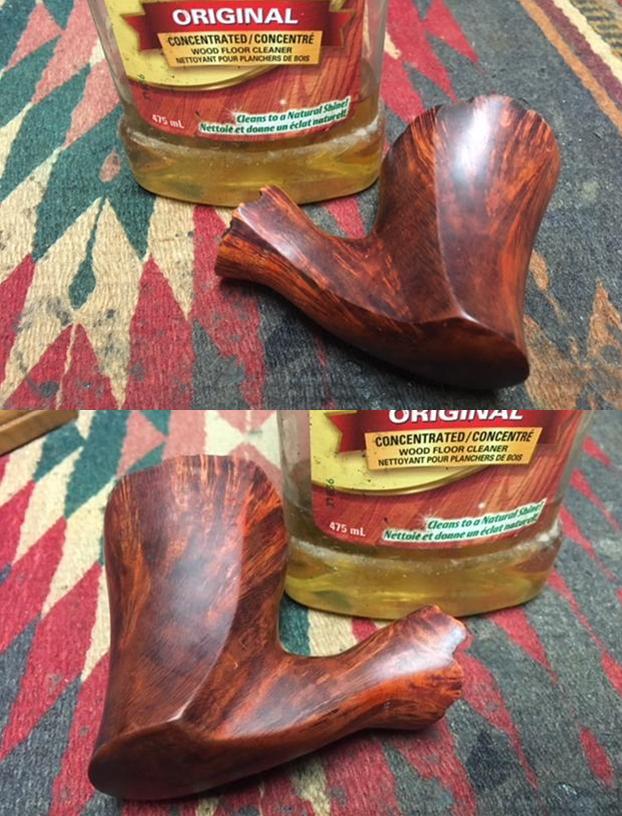 The pipe was starting to look really good. The grain stood out and the contrast was nice. I took a photo of the underside of the shank to show the stamping. You can read the stamp easily and the grade markings though more faint are still readable. 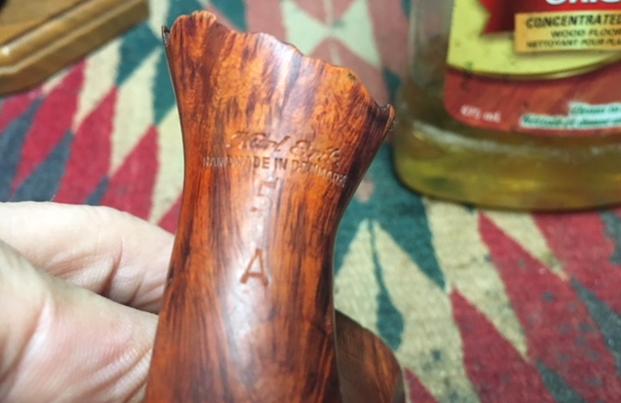 I scrubbed out the shank – working on the mortise with pipe cleaners, cotton swabs and alcohol until it was clean. I cleaned the airway in the shank and stem with alcohol and pipe cleaners as well. I always use 99% isopropyl alcohol because of the low percentage of water in it and the quick evaporation rate.

With the interior and exterior of the pipe clean I rubbed down the briar with Before & After Restoration Balm. I worked it into the plateau on the rim top and shank end as well as into the smooth briar on the rest of the bowl and shank. The Balm works to clean, enliven and protect the briar. I worked it into the briar with my fingertips and the help of a horsehair shoe brush. I let the balm sit for a little wall and then buffed with a cotton cloth to raise the shine. The briar came alive with the balm. I took the following photos to give a picture of the pipe at this point in the process. 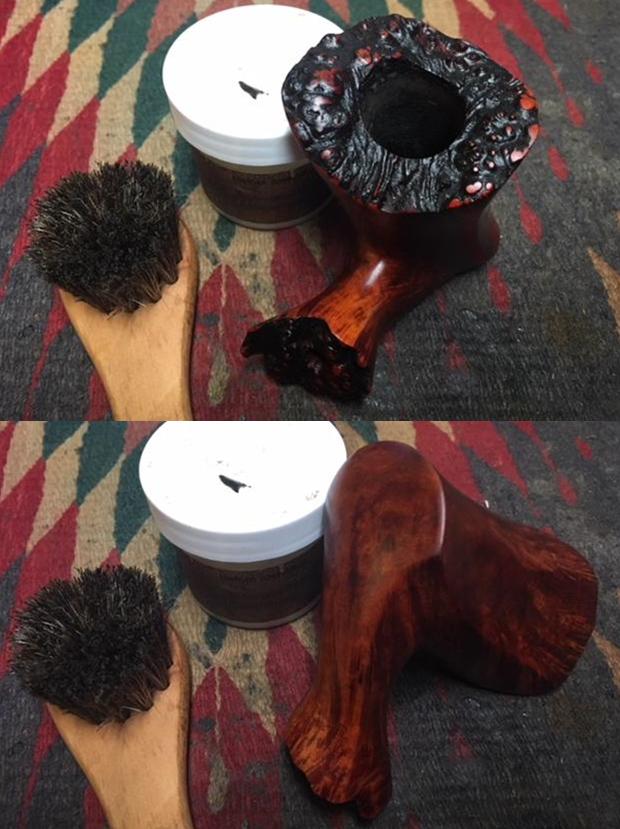 With the bowl finished at this point (other than the final buffing and waxing) I set it aside and turned my attention to the stem. I painted the deep tooth mark on the underside of the stem with the flame of a Bic lighter to raise the dent. It worked better than I expected and reduced the size of the bite mark significantly. (The first photo below is the stem prior to heating with the flame).

The KE logo on the stem was in perfect condition so I worked around that so as not to damage it. I lightly sanded the stem down with 220 grit sandpaper to remove the oxidation and cleaned out the debris from the tooth marks with a cotton swab and alcohol. Once the stem was cleaned up I filled in the tooth mark with black super glue and set the stem aside to let the glue cure. Later in the afternoon when the glue had hardened I sanded the repair smooth with 180 and 220 grit sandpaper to blend it into the rest of the stem surface.

I polished the stem with micromesh sanding pads – wet sanding with 1500-2400 grit pads and dry sanding with 3200-12000 grit pads. I wiped the stem down after each pad with Obsidian Oil to preserve and protect the rubber. After the final pad I gave it a final coat and set it aside to dry.

I the polished the bowl and stem on the buffing wheel with Blue Diamond to remove the remaining small scratches and raise the shine. I gave the bowl and stem multiple coats of carnauba wax and buffed the pipe with a clean buffing pad to raise the shine. I hand buffed it with a microfiber cloth to deepen the shine. The pipe polished up pretty nicely. This turned out to be a beautiful pipe in terms of shape and finish. The finished pipe is shown in the photos below. The dimensions are Length: 6 inches, Height: 3 inches, Outside diameter of the bowl: 2 1/4 inches, Chamber diameter: 7/8 of an inch. Thanks for walking through the restoration with me as I worked over another beautiful Karl Erik Freehand. I will be adding it to the rebornpipes store shortly so if you are interested in adding it to your collection send me an email or a message on Facebook. Thanks for looking. 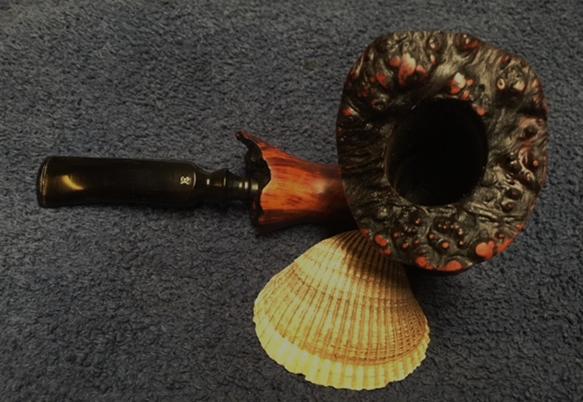 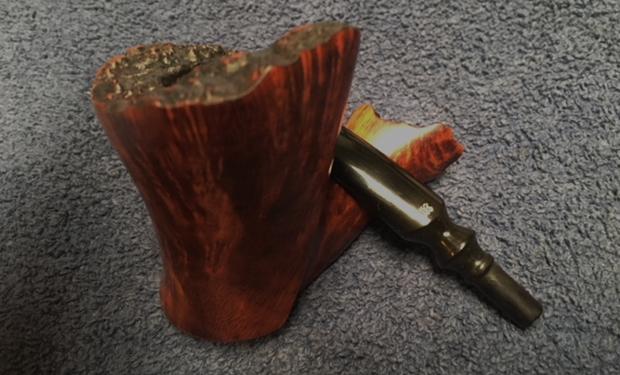 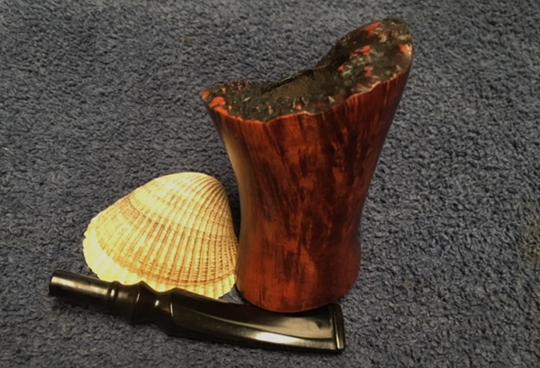 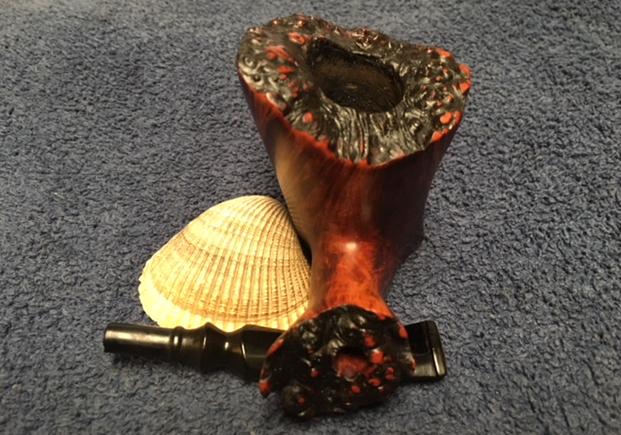