My brother Jeff found an assortment of House of Robertson pipes at an auction in Wilder, Idaho which is an area in the greater Boise, Idaho area. He picked them up for us to restore. I had forgotten that I had mentioned the brand in passing in a blog on Leonard’s Pipe Shop in Portland, Oregon. Here is the link to that blog where I mention it as one of the brands that Leonard’s sold: https://rebornpipes.com/2013/06/06/leonards-pipe-shop-portland-oregon/. It is a fascinating brand that really I had never had the privilege of seeing first hand. He cleaned them all up and on a recent trip to Idaho, I picked them up and brought them back to Canada. I took pictures of the lot of them to show the wide variety of pipes that they made in terms of both size and style. The craftsmanship is very good with the fit of the stem and shank well done and the finish both rusticated and smooth exemplary. Jeff picked up three more of the brand in Pocatello, Idaho so I will be working on more of these pipes in the future. They all have the name House of Robertson roughly hand etched on the side or underside of the shank with an engraving tool.

I have posted this information on the brand on the previous House of Robertson pipes that I have worked on but I thought I would add it on this blog as well. There is very little information available and what I found on Pipedia pretty well summarizes all I could find. I include that here.

“House of Robertson” was in business for many years, but alas, closed their doors in 1999. They were located in Boise, Idaho. They are noted for making rather large and interesting pipes. Thayne Robertson was a Master Mason, AF & AM, and started the shop about 1947 and his son Jon started working there in 1970 when he finished college, along with Thayne’s daughter. Thayne and his son started making the big pipes at that time, and made them together until 1987 when Thayne passed away. Jon kept the store and his sister moved on to other things. The House of Robertson appears to have closed around 1999. https://pipedia.org/wiki/Robertson

I am restoring the last of the five pipes in this lot – this one a beautiful little Rhodesian Straight Grain. It is the pipe on the lower left in all of the above photos. Like the rest of the pipes in this fivesome this pipe still has raw briar in the bottom third of the bowl and appears to never have been smoked to the bottom of the bowl. It is etched with the House of Robertson signature on a smooth panel on the left side of the oval shank. On the underside of the shank next to the shank/stem union it is etched Straight Grain. The smooth finish on the pipe was dirty but showed some real promise through the grime. There was a light coat of lava that had overflowed from the cake in the bowl over the top of the rim. The cake was quite thick and was hard. Overall the pipe was in excellent condition and had some interesting grain around the bowl. The bottom of the bowl and shank has a flat panel that allows the bowl to sit upright on the desk or table. The stem was lightly oxidized but clean. The oxidation had caused some pitting on the surface. The fit of the stem to the shank was good. The vulcanite appeared to have been a pre-formed stem that was shaped to fit this pipe. Jeff took photos of the pipe before he started the cleanup. 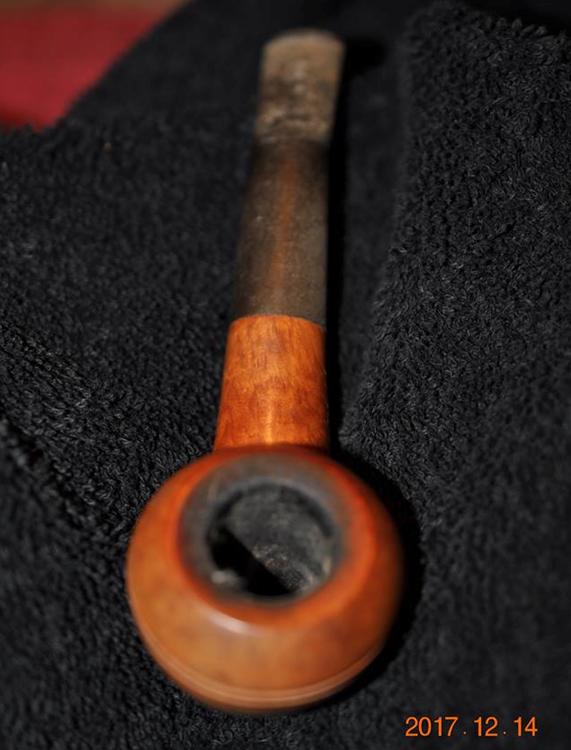 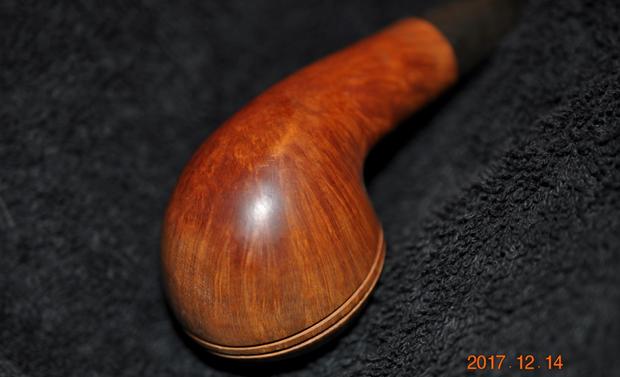 The next two photos show the etched name on the left side of shank – House of Robertson. On the underside of the shank it reads Straight Grain. 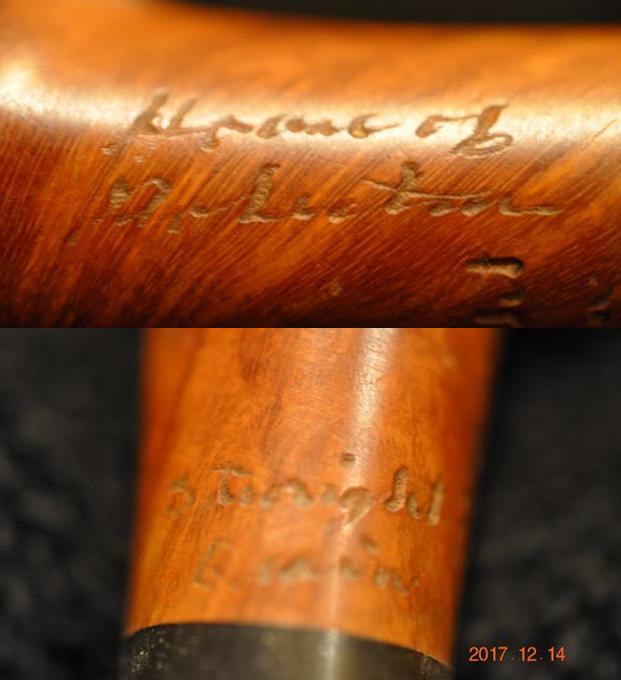 The tapered stem surprised me. The pipe etched Straight Grain made me assume it was a higher end House of Robertson. It still may be one but the stem was loose and I really had not taken time to check it out. I tried to pull the loose stem only to find that it had a threaded tenon. I unscrewed it from the shank and was surprised to find that it had a Grabow style threaded metal tenon and a threaded mortise insert. In all of the other House of Robertson that I have worked one I had not ever seen a threaded metal tenon. This was a first. The surface of the vulcanite was oxidized and pitted from the oxidation. There was tooth chatter and some light tooth marks on both sides of the stem at the button. 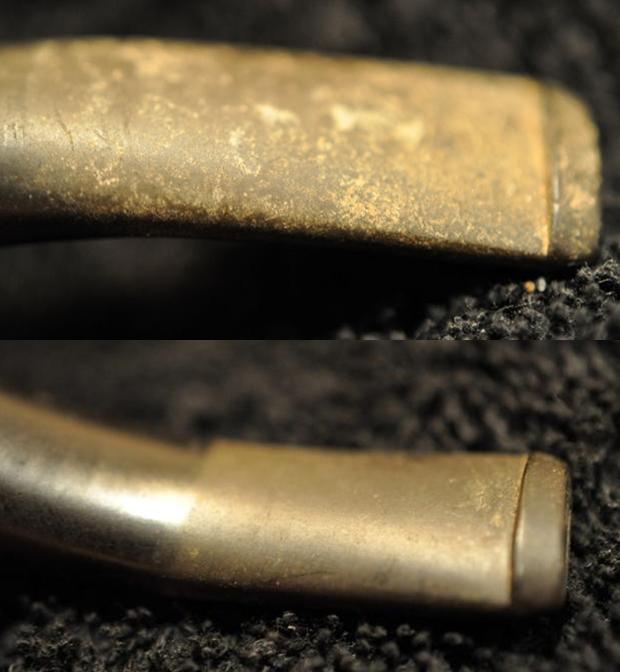 Jeff once again performed his usual stellar clean up job on the pipe leaving it pristine and without damage to the finish. He reamed the bowl with a PipNet pipe reamer and cleaned up the remnants with the Savinelli Fitsall Pipe Knife. He scrubbed out the mortise and the airway in the shank and the stem with alcohol, cotton swabs and pipe cleaners. He scrubbed the exterior of the bowl, rim and shank with a tooth brush and Murphy’s Oil Soap to remove the grime of the smooth finish on the bowl and shank. He rinsed it under running water. He dried it off with a soft cloth. Once the dust and debris were removed the finish looked very good. I took photos of the pipe to show its condition before I started my work on it. 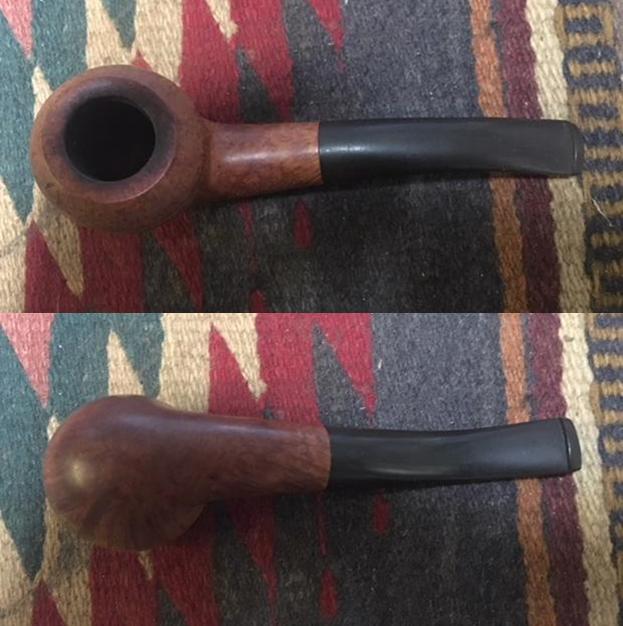 I took a photo of the bowl and rim top to show the condition of the pipe. The bowl was quite clean in the bottom third of the bowl – the briar was not darkened but was still raw briar. The rim itself was very clean with none of the dark lava and very little darkening along the edges. The inner and outer edge of the rim was very clean. The photos of the stem show that it was clean but oxidized on both sides and pitted in the surface of the vulcanite. 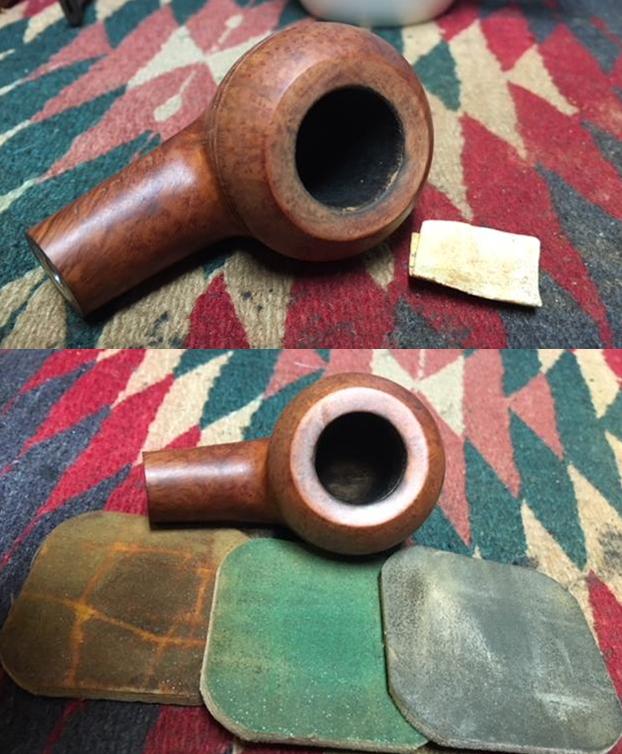 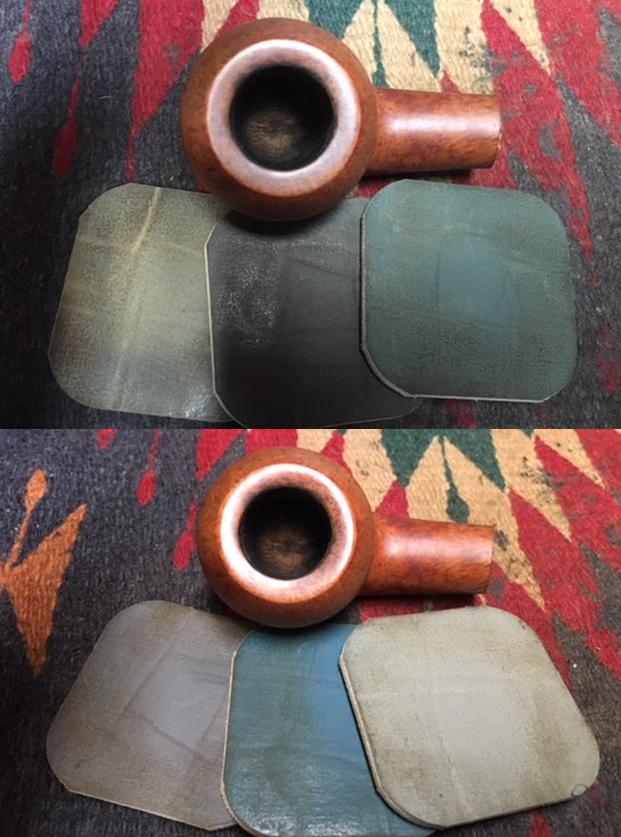 I rubbed the bowl down with Before & After Restoration Balm to deep clean the finish, enliven and protect the briar. I hand rubbed it with my fingers, worked it into the finish with a horsehair shoe brush. I wiped it off with a soft cloth. I buffed the bowl with a horsehair shoe brush to polish it. It really began to have a deep shine in the briar. I took some photos of the bowl at this point to mark the progress in the restoration. The birdseye grain stands out on the two sides and the cross grain stands out on the rim top, the front and back of the bowl and the top and underside of the shank.

I sanded the stem with 220 grit sandpaper to remove the tooth chatter and marks on both sides of the stem near the button.

I polished out the sanding scratches and marks in the vulcanite with micromesh sanding pads – wet sanding it with 1500-2400 grit pads and dry sanding it with 3200-4000 grit pads. I wiped the stem down with Obsidian Oil after each sanding pad. I buffed the stem with Blue Diamond on the buffing wheel. I brought it back to the table and sanded it with the final three 6000-12000 grit pads. I polished it further with Before & After Pipe Polish –using both the Fine and Extra Fine Polishes. I gave it a rubdown with Obsidian Oil one last time and set it aside to dry. 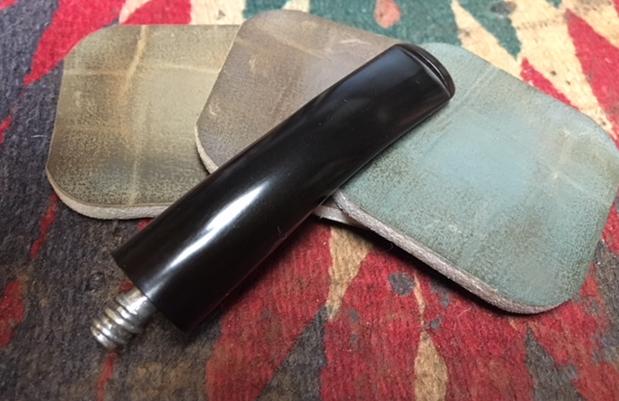 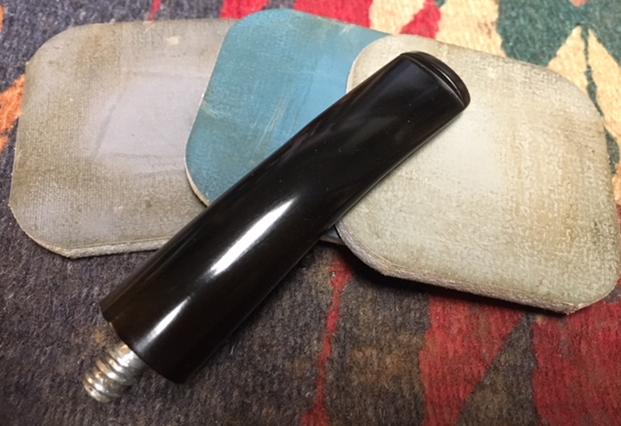 I put the stem back on the bowl and worked the pipe over on the buffing wheel using Blue Diamond to lightly polish the stem. I buffed the bowl and stem to raise the shine on the briar and on the vulcanite. I gave the bowl and stem multiple coats of carnauba wax. I buffed the entire pipe with a clean buffing pad to raise the shine. I hand buffed it with a microfiber cloth to deepen the shine. The finished pipe is shown in the photos below. The medium brown stain on the smooth finish of the Rhodesian shaped bowl works well with the rich black of the vulcanite stem. The polishing of the stem left this a beautiful and interesting looking pipe. The dimensions of the pipe are: Length: 5 1/2 inches, Height: 1 1/2 inches, Outside Diameter: 1 5/8 inches, Diameter of the chamber: 3/4 inches. Still thinking through whether or not I am going to keep this House of Robertson in my collection or let it go. Keep an eye open for it to appear on the store if decide to pass it on. Thanks for looking. 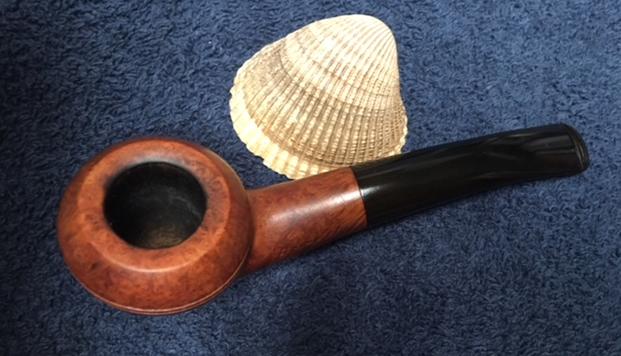 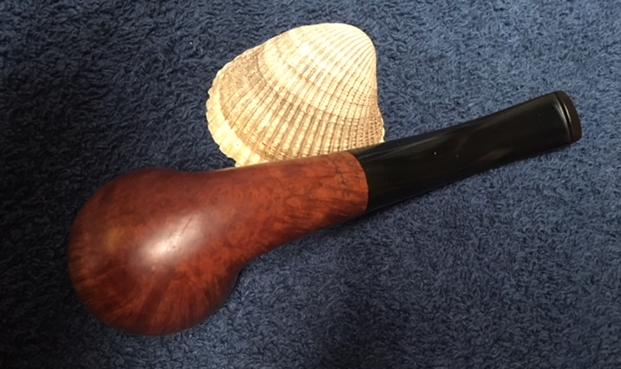 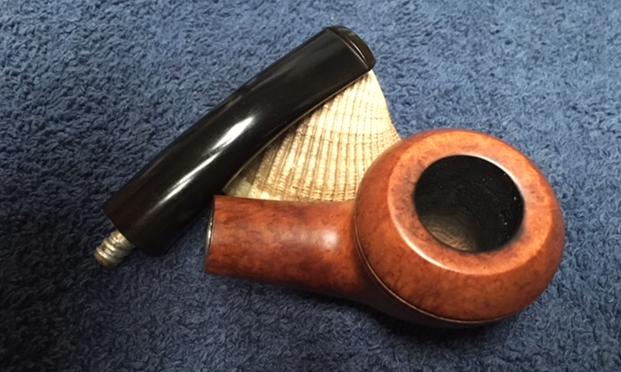 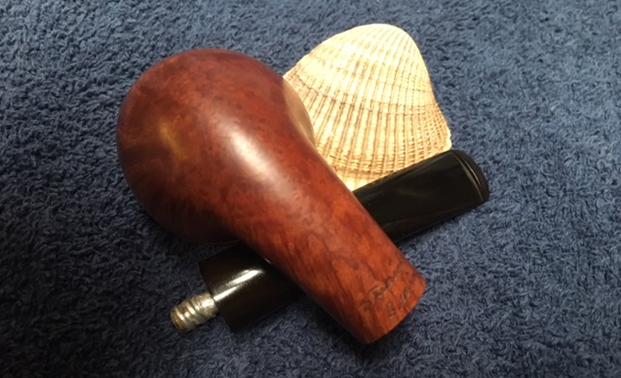