A Short Story by Steve Laug

One of the challenges that I give myself when I have the time for it is to build a story from an old photo. I have written stories about tobacco shops, pipe men, relationships and buildings and rooms by looking at old photos and weaving a story. The photo I have chosen for this story is the one below. In it is a pipe smoker sitting at his desk with an array of photos around him and working diligently writing. His pipe is in his mouth. Sometime if you want a challenge give this a whirl – craft a story from a photo. Here is the photo and the story follows. 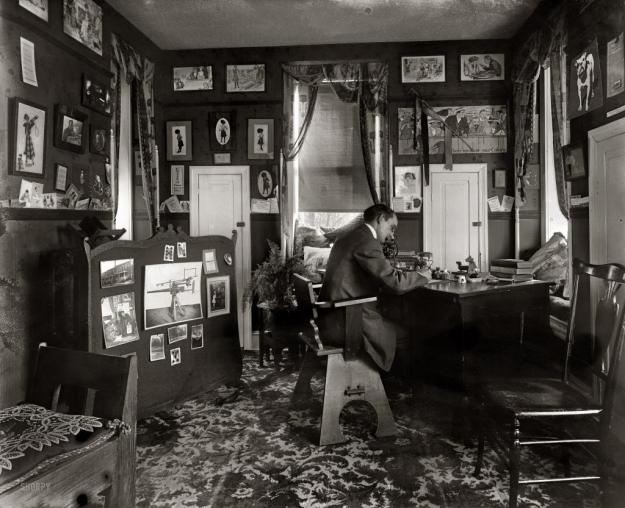 Outside, the sun was shining and the rain had stopped. Inside, the old house was very quiet. My wife was visiting her mother for the day so I called the office and let them know that I would not be in today but would be taking a day off to get some personal work completed. I went to my study and got ready to work. I had a plan and it was pretty simple. Today would be a day to do complete the work on my book. I had already written twelve chapters and the prologue but I needed to put some final touches on it and write a concluding chapter. Before I sat down at the desk I adjusted the shade on the window to my left to block the bright light that hit my desk top. I put a fresh pad of paper and the file of completed chapters on the desk top. I sat down and looked out the window in front of me while I loaded up a pipe with some of my favourite tobacco. I tamped it down with my finger and lit it with the matches on my desk. I dropped the burned matches in the ash tray on the desk and sat back to enjoy the initial puffs on the pipe. Once it was going I would start to write.

To give you a bit of an idea how my mind works I want to describe the room I am working in. I have photos and pictures on the walls around the room that give me inspiration but those are not the important ones for the book I am currently writing. Rather, for each book I write I have a practice that has served me well. On the fireplace screen behind me I pin up photos that I use to get the ideas for my stories flowing. I have found that a good photo can add depth and dimension to my writing. Photos seem to give me ideas and concepts that otherwise may not have surfaced during my work. In this case the old family photos, office and building and the central photo of a contraption that looks like a gun all fed ideas that already graced the chapters of my book. I moved them around the board often and also added to them regularly as I moved through the writing process. It always amazed me when I looked at the finished book and then turned around and looked at my pin board. I could see the flow of the story in the photos I chose.

The rest of the room is suited to my tastes. The cupboards on either side of the window hold my writing supplies – paper, notebooks, and file folders. I placed my desk at an angle between the windows to maximize the natural light in the room and also to give me some much needed air circulation on hot days. The desk is kind of my kingdom. I have my frequently used reference books on one corner so that I can quickly look things up without losing my train of thought as I write. I have an inkwell and fountain pen there for writing. I have a stack of paper that I can quickly access. But most importantly of all to my left is my pipe rack with a selection of some of my favourite pipes and a humidor filled with tobacco. I also have a small container to hold the matches I use to light my pipe and an ashtray for the dottle.

I puffed slowly on my pipe as I made the necessary edits to the completed chapters. This was my fifth or sixth time going through the chapters to make sure everything flowed and the content did no contradict itself as it unfolded. It is so easy to mix up names of characters and moments in a story if you don’t consciously check for that as you work. I had caught most of the errors but I am such a perfectionist that I wanted to make sure one final time. I found that it also prepared my mind to write the concluding chapter and wrap things up. I got lost in the writing, almost oblivious to the world around me. I added a few touches to the earlier chapters that the later ones brought to light. I crossed out things were too obscure and rewrote those sections. Before I knew it the morning was gone and the sun had moved to the front window. I stood and stretched out the kinks. I dumped out the dottle in my pipe which had long since gone out. I refilled it and lit it again and stood working through the flow of the book in my mind. It was working well.

I sat back down and wrote out the first draft of the closing chapter. It really did not take too long because of the all the work I done all morning. The pieces came together nicely and when the bowl went out on my pipe the chapter was finished. Not too bad. I once more dumped out the ash and refilled my pipe. I lit it and sat for a moment just resting. I turned and looked at the photos on the fire-place screen to make sure I had not missed anything important in any of them. Things looked good. I quietly puffed on my pipe while I sat. It was good to just be silent.

I got up and went to the fire-place mantle and filled a cup with a little bit of scotch. I took it back to the desk and sipped it as I read the book from front to back yet again. I wanted make sure that the closing chapter pulled together all the loose pieces and did not start new unresolved ones. I read through the pages while sipping and puffing. I was so focused on the read that I did not notice that the pipe was empty until I sucked in some ash. Just as that happened I heard the door open. I checked the clock and saw that the afternoon was gone. I had been so involved in the writing process that I had forgotten to stop and eat. It seems like that happens a lot when I am in this mode. I feel a bit hungry now; perhaps my wife would like to go to the local pub for an early supper. I finish the last page of the book and put it in the folder. I empty the pipe and set it in the rack. I take a deep breath and walk out to the parlour to make a plan with my wife.